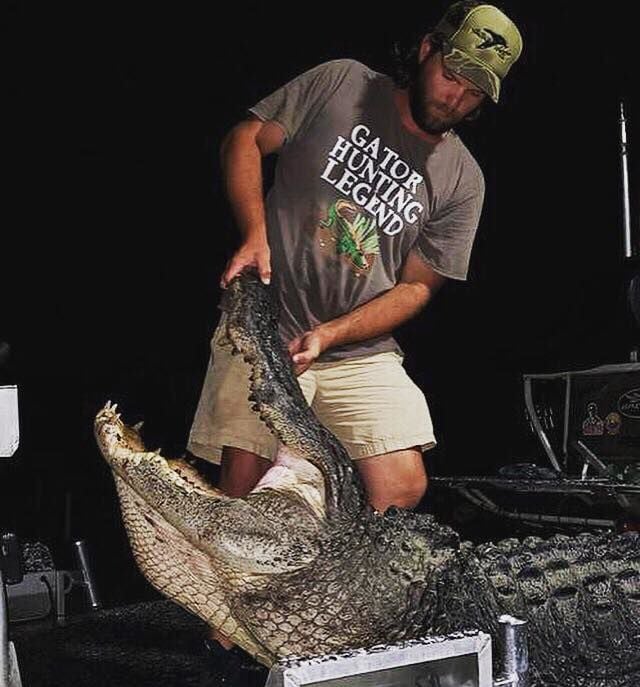 Hunter Neeley, 28, poses with a 13-foot and 1,000-pound gator he caught in Lake Moultrie. Hunter Neeley/Provided 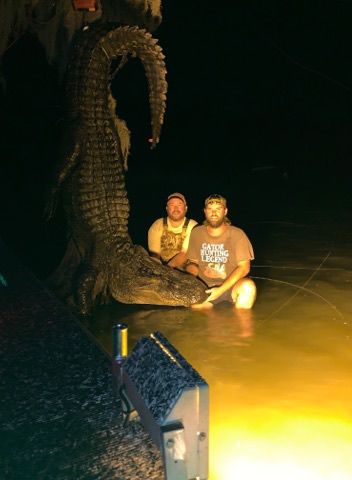 Crick Hooker (left) and Hunter Neeley pose with a 13-foot and 1,000-pound gator they caught in Lake Moultrie. Hunter Neeley/Provided

Hunter Neeley, 28, poses with a 13-foot and 1,000-pound gator he caught in Lake Moultrie. Hunter Neeley/Provided

Crick Hooker (left) and Hunter Neeley pose with a 13-foot and 1,000-pound gator they caught in Lake Moultrie. Hunter Neeley/Provided

A massive gator caught and killed in Lake Moultrie in Berkeley County late last month may be the biggest of the South Carolina hunting season.

Hunter Neeley, alongside his friend Crick Hooker and his girlfriend, Katelon Smith, snagged the alligator late on Sept. 28. The reptile wouldn't fit completely on the scale, but the parts they managed to size up tipped the scales at more than 1,000 pounds. The crew had to use two harpoons and a bow and arrow to take the reptile down.

While the season won't end until Oct. 12, S.C. Department of Natural Resources spokesman Robert McCullough said it "seems to be the largest gator" so far.

Neeley, a 28-year-old dock builder from Chapin, said he has run into the gator on numerous occasions over the past four weeks. He finally ran into him late in the night on Lake Moultrie.

"I’ve been trying to get him all season,” Neeley said. “It took five trips to make it happen, but we caught him slippin'.”

Neeley had the meat from the gator processed and then donated to a food bank. He plans to keep the head as a trophy. The hunter also noticed that the gator had been marked, meaning it was released as a baby he estimates some 70 to 100 years ago.

Alligators, an otherwise protected species, were opened to public hunt by the state Legislature in 2008 when coastal rivers and lakes swarmed with the large animals. Waterfront property owners and others reported problems with them.

The first year, more than 1,000 people applied. But, by 2012, after four years of hunting, the DNR harvest report noted the number of large alligators taken were shrinking and so did the number of hunters seeking $100-plus permits.

The Palmetto State has strict regulations when it comes to gator hunting. You can't hunt an alligator that is smaller than 4 feet long, and hunters can't shoot unsecured alligators on public or private land. Hunters can't use bait, and a line must be attached to the animal no matter the method used to kill it.

Neeley is no stranger to gator hunting. He estimates he has killed at least 10 this season all ranging from 8-13 feet. He is now the self-proclaimed "Gator Hunting Legend." In his 10 years hunting gators, he said this was probably his best season.

“When it comes to hunting in the state, it’s the biggest adrenaline rush I know,” Neeley said.