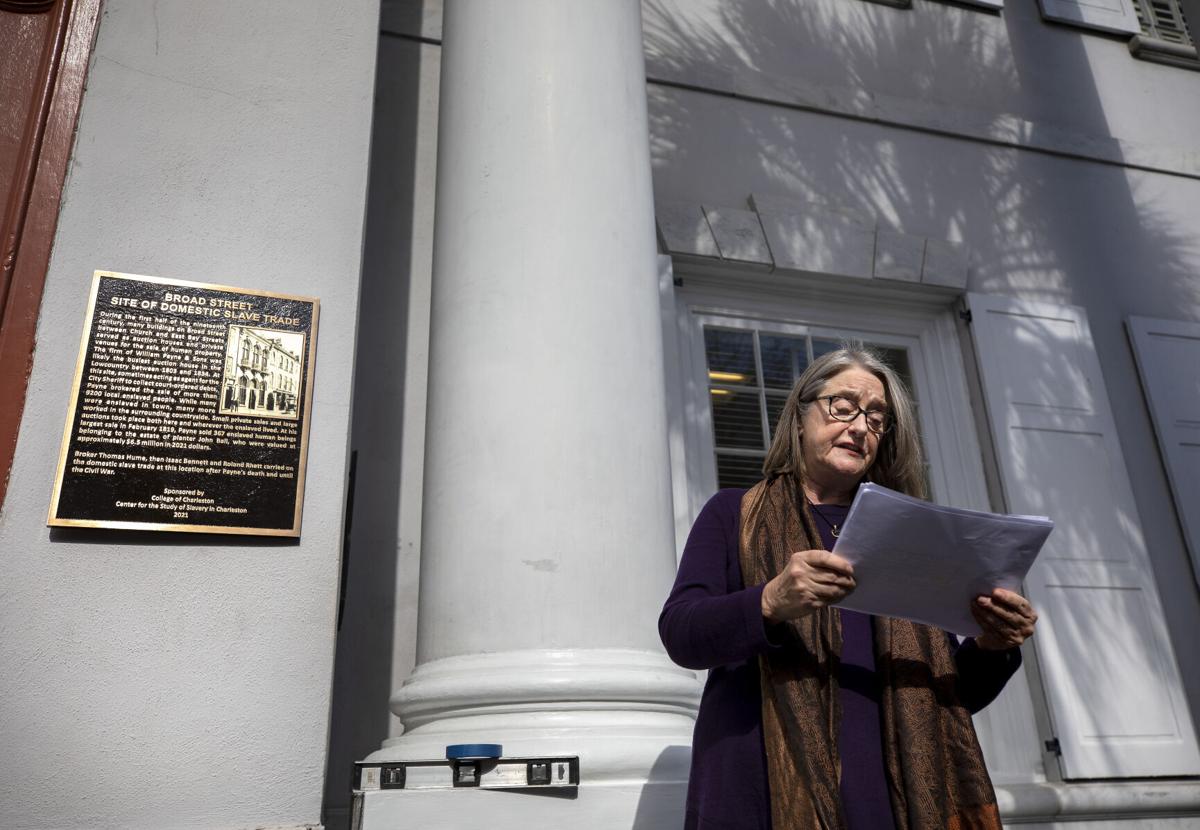 Charleston native Margaret Seidler reads  copies of slave auction advertisements from William Payne’s auction house on Thursday, Jan. 28, 2021, in Charleston. Payne was her great-great-great grandfather and his business was on Broad Street. Seidler, who discovered in 2018 that she was related to Payne, led the effort to have a bronze plaque placed there, with help from the College of Charleston's Center for the Study of Slavery. Grace Beahm Alford/Staff 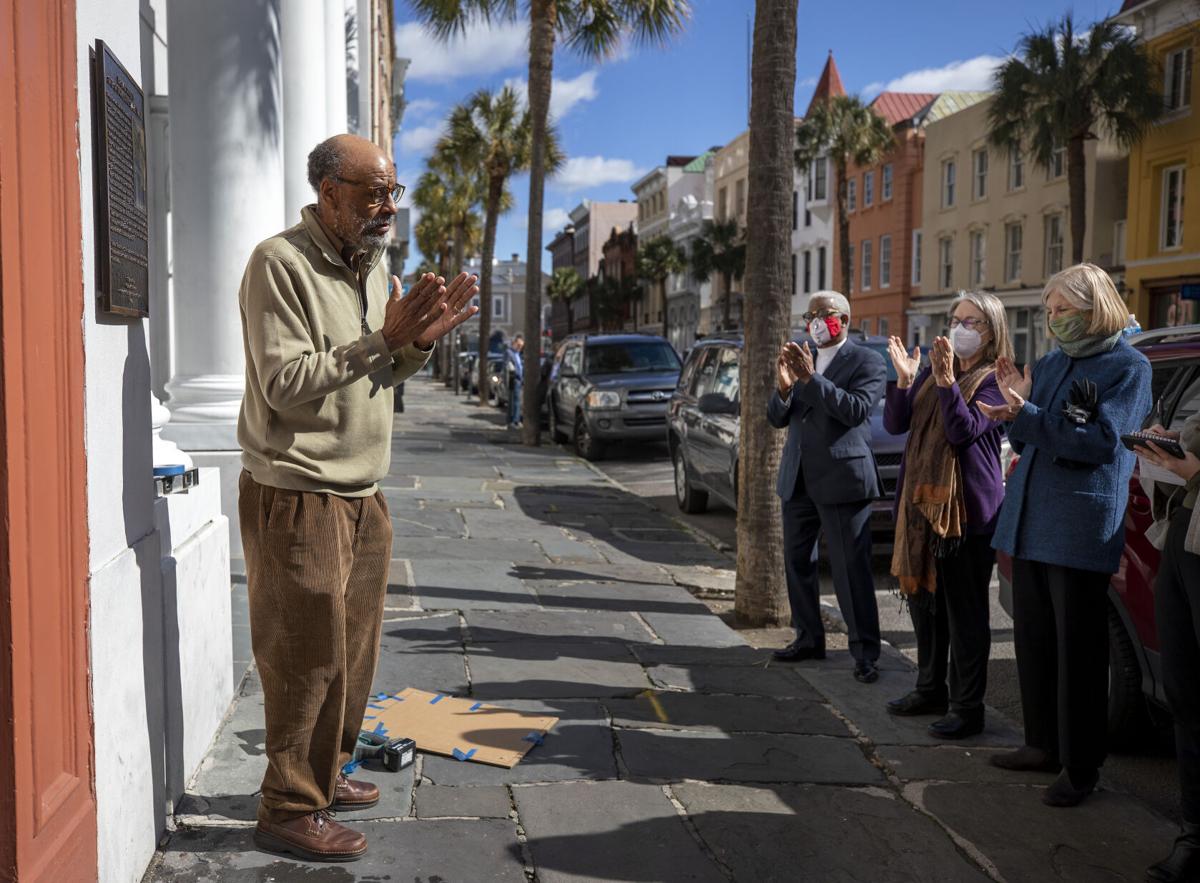 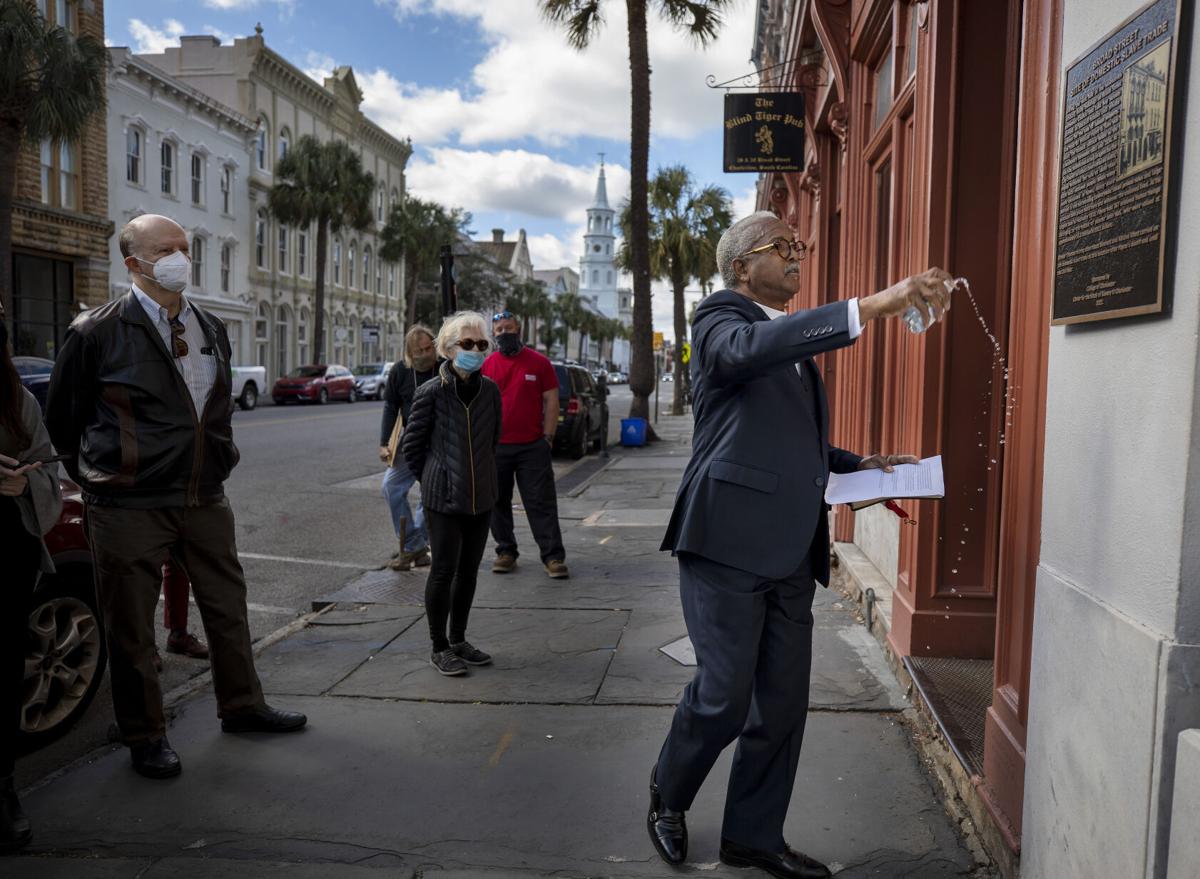 The Rev. Anthony Thompson blesses the new Charleston historical marker that notes the history of the former slave auction house on the site owned by William Payne, Thursday, Jan. 28, 2021. Charleston native Margaret Seidler, along with the College of Charleston's Center for the Study of Slavery, worked to have the plaque placed. Grace Beahm Alford/Staff

Margaret Seidler read the names, loud enough that people standing around could hear over the traffic passing by on Broad Street.

She stood in front of a large white building with big columns that used to be two smaller buildings without columns — something that anyone walking by can see now, thanks to a photo printed on a new bronze marker.

If someone stops and reads the text, that person will learn, maybe for the first time, that the street they are walking that is now lined with law offices, galleries and bars and restaurants, a street featured in glossy magazine spreads touting Charleston's beauty, was, for decades, a booming location of the domestic slave trade.

Enslaved people were sold at public street auctions and inside the buildings at private sales.

And, at that specific site, Seidler's fourth great-grandfather, William Payne, had brokered the sale of enslaved people.

The number known of just how many people keeps growing. Seidler found seven more this week. The likely total is well over 10,000, she said.

That fact came as a shock to Seidler when she traced her family lineage in 2018. A native Charlestonian, she was always told the same thing growing up, that her ancestors were poor German immigrants on the city's East Side.

She didn't question it.

But a DNA test led her down a winding, research-filled, emotional path ending in the reality that she was descended from people who profited from the sale of human beings. There was John Torrans, a wealthy Charleston merchant in the transatlantic slave trade. She'd uncovered his story first. Torrans' daughter, she discovered, married Payne.

A white woman bridged the races. Then she found slave traffickers in her family.

She didn't claim responsibility for her ancestor's actions. The response she often got from telling people about the connection was that she had nothing to do with her ancestors' sins. But she felt a responsibility to the knowledge of it — that she had to do something to advance efforts to make the truth of Charleston's history more visible.

The fact that Charleston was, after years of talking about it, making progress to build an International African American Museum, helped bring her to the idea of placing a historical marker.

The museum is memorializing a place that has gone unmarked, Gadsden's Wharf, a site of the transatlantic slave trade. And a goal of the museum is to promote a truer telling of history beyond its walls, one that does not erase African Americans or turn a blind eye to the actions of people who profited from the sale of human beings.

Seidler could do something to advance that.

"I believe that when you share the whole truth, there is potential for healing," Seidler said. A historical marker seemed to be "the most effective way to illuminate" that truth, she said.

Seidler dug deeper into the research. Now with the goal of placing a marker, she had to build a case for why it should be there.

She studied the newspaper ads that Payne placed, and the numbers of the sales grew from hundreds to thousands.

She tracked them in spreadsheets, recording names when they were included.

The task of simply pinpointing where the auction house was located turned out to be a journey of its own. Frustrated by the confusing task of digging through old property records, she turned to a list of professional deeds researchers provided by the county deeds office. She reached out to one of them, Doreen Larimer, who was listed as a historic deeds researcher.

To do this kind of real estate research requires genealogy research, said Larimer. They go hand in hand.

Relying on numbered addresses doesn't work: The streets of the peninsula have been renumbered several times over that past three centuries. So, while records may include a numbered address for a historic property, it likely won't match up with the modern street address.

Charleston is incredibly rich in resources when it comes to historic documents, Larimer said. The most difficult part for many people is just reading the writing. Most people aren't accustomed to the script that fills the many pages of historic property records documenting land ownership on the peninsula.

The historic deed itself creates a kind of puzzle. The legal description defines the site by the parcels around it — this person's land is on the property's east side, this other's on the west side — meaning the task also involves tracing the ownership of those surrounding parcels, too, to prove that the site in question is the one you're looking for, in this case, Payne's auction house.

Local historian and author Peg Eastman added another piece: a photo to show what the building, which used to have an address of 32 Broad before it was combined with the structure next to it, looked like at the time Payne operated his business.

To write the language on the marker, Seidler leaned on the expertise of other local historians, like Nic Butler of the Charleston County Public Library and Bernard Powers, director of the College of Charleston's Center for the Study of Slavery, which became the sponsor for the project.

Standing in front of the just-placed marker Thursday, Powers said he hopes this will have a ripple effect, that other people will research their family history, face it head-on and use the knowledge proactively.

"You know, many people, when they discover this aspect of their family — and we've seen examples — they would run away from it. They would hide it. They would bury it."

That didn't happen this time, he said.

Charlestonian Margaret Seidler told the story behind this Broad Street property on Understand SC, The Post and Courier's news podcast, in November.

Listen to the episode: Uncovering untold stories at 4 historic sites in Charleston

You can also listen on Apple Podcasts, Spotify or wherever else you listen to podcasts.

"Silence can be deadly, because it can miseducate," Powers said. "It can also make people far more comfortable than they ought to be with the status quo."

The wording on the marker is intentionally matter-of-fact, Powers said, to show "just how routine it really was."

As the marker says, "many buildings on Broad Street between Church and East Bay Streets" — not only Payne's — were "private venues for the sale of human property."

Payne's, though, was likely the busiest between 1803 and 1834. At his biggest sale in February 1819, Payne sold 367 enslaved human beings, a fact that is included on the new marker, along with the estimated dollar-value of that sale, about $6.5 million in 2021 dollars.

Several years ago, a marker was placed at the Old Exchange Building, down the street from the place where the new plaque has been installed. It explained that Charleston was "one of the largest slave-trading cities in the U.S." and that auctions occurred there, usually just north of the Exchange.

It also notes that merchants sold enslaved people "at nearby stores on Broad, Chalmers, State and East Bay streets."

The new marker on Broad is unique in that it points out one such place, not on a building that's been preserved for its history but one that's part of the day-to-day modern function of the street. A bank's offices are there now — the owners of the building, a firm called Wessex Capital Investments, gave their permission for the marker placement — and a popular bar sits to one side, a stylish seafood restaurant on the other.

That area "has been associated almost solely with whiteness," Powers said. But the history of Black Charlestonians is there. The National Freedman's Savings Bank, a bank established for African Americans after the Civil War, was on Broad Street. Also on Broad Street, Jehu Jones Sr., who was born enslaved, opened a business once described as "the finest hotel in Charleston."

The list goes on, and there is work to do, Powers said, in making more of these stories physically visible on the streets of Charleston.