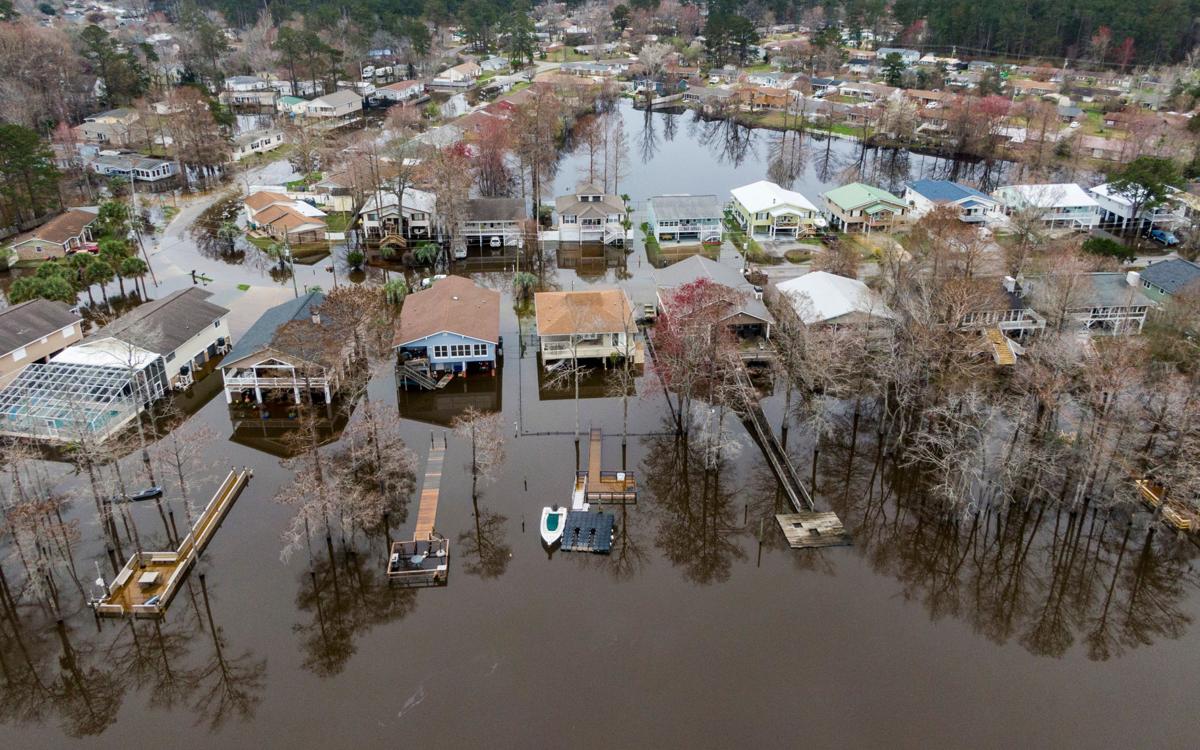 Flooding from the Intracoastal Waterway inundated roads and homes in the Rosewood neighborhood in Socastee, S.C, on Tuesday, Feb. 18, 2020. File/AP 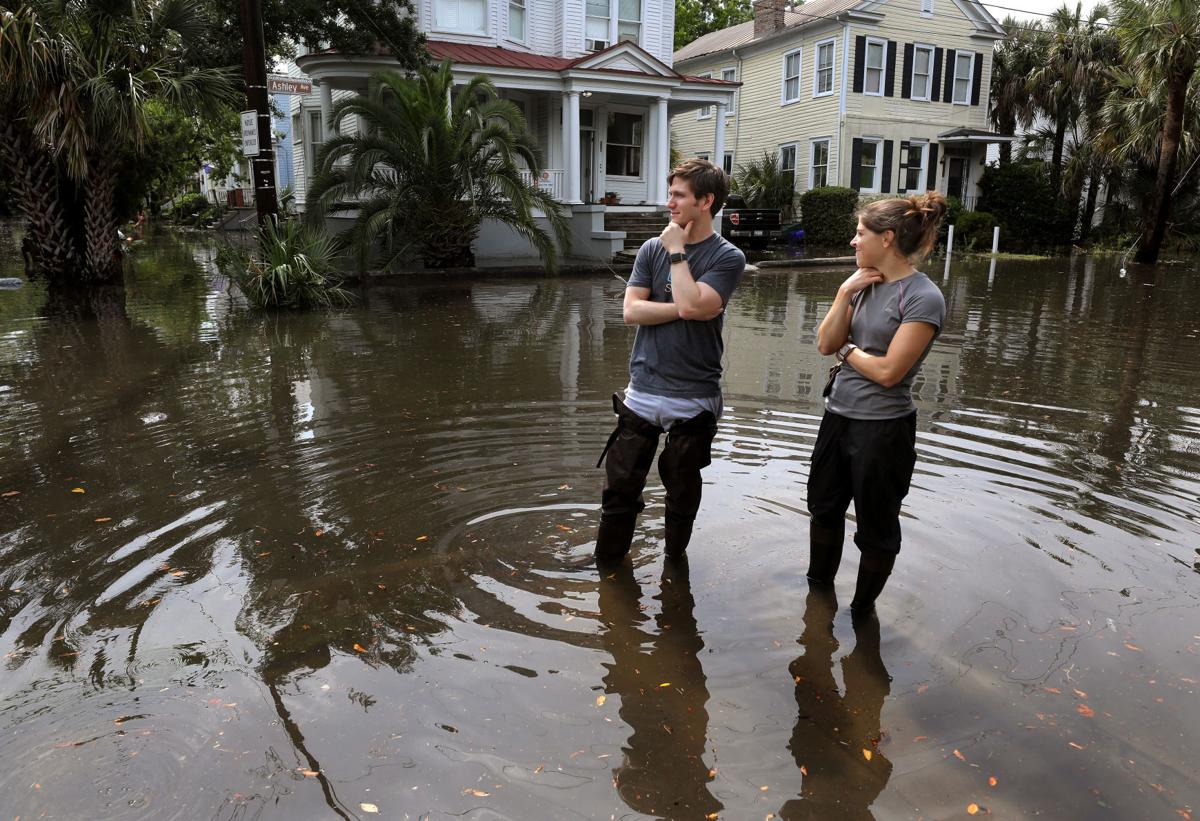 Morgan McBee and wife Leah McBee survey the flood water depth on Ashley Avenue Wednesday, May 20, 2020, in Charleston. The couple, who live in the neighborhood, had 4.67 inches of rain at their house. File/Grace Beahm Alford/Staff

A new nationwide model of flood risk finds that, across the country, almost 70 percent more properties are at risk of flooding than the Federal Emergency Management Agency's maps show.

In South Carolina, the model asserts that 40 percent more properties are at risk of a 100-year flood — or a 1 percent annual chance that water will cover a property — than projected by FEMA. The disparities with FEMA's maps are largest in the state's northwest swath, including Spartanburg County, the fifth most populous.

The model is the work of New York-based nonprofit First Street Foundation, which is devoted to calculating the effects of climate-change-driven sea level rise and stronger storms. The work was performed in conjunction with academics at the Massachusetts Institute of Technology, Columbia University and the University of Bristol, and reviewed by an independent panel.

It has not been peer-reviewed, but two academic papers are pending, First Street's Director of Research and Development Jeremy Porter said.

The foundation has also mapped its results on a website called floodfactor.com, where anyone can look up their home and get a score out of ten indicating their flood risk and probabilities of various floods.

To floodplain managers and many flood survivors, the model's conclusions come as little surprise. FEMA's maps have long been known to not include areas prone to flooding. The agency has closely mapped coastal areas like the Lowcountry but has failed to map more than 2 million miles of smaller inland streams, said Chad Berginnis, president of the Association of State Floodplain Managers.

In some cases, the existing maps are years out of date. Charleston County is an extreme example.

Thus, the maps that determine who pays for flood insurance, dictate how high houses must be built and influence where lenders offer credit date back almost 20 years in Charleston County.

Porter said the foundation's model avoids some of the challenges of FEMA mapping precisely because the government has to field complaints from local jurisdictions which may argue for certain areas to be excluded from flood zones.

Berginnis and the city of Charleston's floodplain manager, Stephen Julka, both said the model was useful in spreading awareness of flooding. But they also expressed worries about how the Flood Factor website may be drawing conclusions on a house-by-house basis.

"I'm just a little bit concerned about the implied precision of the tool, which says basically you have flood risk down to a tenth of a foot," Berginnis said. "You just can't downscale a national model like that."

Julka also wondered whether the website was taking into account details on the ground, like a road that might serve to stop water from flowing and drainage issues or flood-control structures. Porter said that modelers did include major flood-control projects.

Still Julka said, Flood Factor does not have the problems attached to many other sites about flood risk, which may be pushing researchers to buy private flood insurance or another product.

The website replaces First Street's former Flood IQ site, a popular tool that showed tidal inundation and potential hurricane surge levels for storms of different strengths. That website, said Norm Levine of the College of Charleston, "pushed water a lot farther and a lot harder" than other modelers.

But the new model appears to correct somewhat for previous overzealous estimates, said Levine, who runs C of C's Lowcountry Hazards Institute. He has meticulously mapped flooding in Charleston and verified it with local residents.

It also doesn't specify whether water will actually enter a house, only whether it will make it to the footprint of a building.

That's led to some curious results. Berginnis said he entered the addresses of two adjacent houses in an Ohio neighborhood he had worked in previously and knew had flooding problems. One house was elevated to avoid flooding and the other was not, but both houses got identical Flood Factor scores.

Porter said the risk shown on the site is still a valuable metric. A previous study by First Street showed that flooding could impact property values simply if water was covering roads, not just reaching inside homes, he said.

But in the Horry County neighborhood of Rosewood Estates, people are still buying, said resident Terri Wilson. The neighborhood has been swamped by hurricanes in 2016 and 2018, and had less-severe flooding earlier this year. It has not been included on FEMA's flood maps, even though it abuts the Intracoastal Waterway.

"I don't understand how (buyers are) not seeing this," Wilson said. Flooding in the neighborhood has been highly covered by the media, including the Post and Courier. "The information is out there even if someone was trying to hide it or conceal it."

She said the Flood Factor website could prove a valuable tool for future homebuyers there and elsewhere in Horry County if it continues to raise awareness. The county at the north end of the coast is one of the places that First Street says FEMA has low-balled flood risk.

The search engine not without its quirks, however: only one home address in Wilson's subdivision actually shows up on the website.