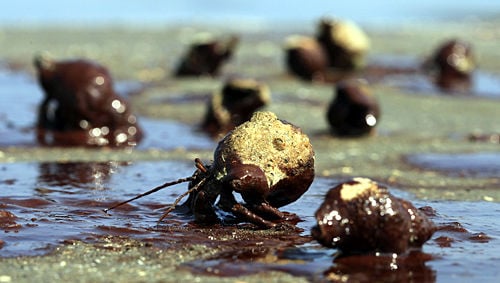 Hermit crabs struggle to cross a patch of oil Sunday on a barrier island near East Grand Terre Island, La. 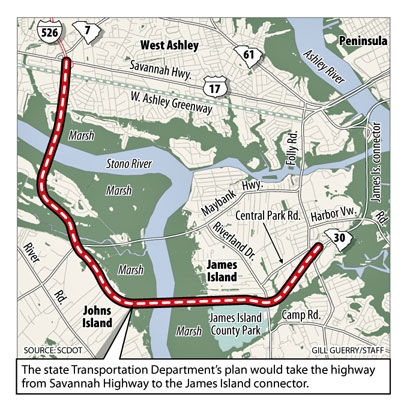 Hermit crabs struggle to cross a patch of oil Sunday on a barrier island near East Grand Terre Island, La.

MIAMI -- More than half of the federal judges in districts where the bulk of Gulf oil spill-related lawsuits are pending have financial connections to the oil and gas industry, complicating the task of finding judges without conflicts to hear the cases, an Associated Press analysis of judicial financial disclosure reports shows.

Thirty-seven of the 64 active or senior judges in key Gulf Coast districts in Louisiana, Texas, Alabama, Mississippi and Florida have links to oil, gas and related energy industries, including some who own stocks or bonds in BP PLC, Halliburton or Transocean -- and others who regularly list receiving royalties from oil and gas production wells, according to the reports judges must file each year. The AP reviewed 2008 disclosure forms, the most recent available.

Those three companies are named as defendants in virtually all of the 150-plus lawsuits seeking damages, mainly for economic losses in the fishing, seafood, tourism and related industries that have been filed over the growing oil spill since the Deepwater Horizon drilling rig exploded April 20, killing 11 workers. Attorneys for the companies and those suing them are pushing for consolidation of the cases in one court, with BP recommending Texas and others advocating for Louisiana and other states.

A Washington-based federal judicial panel is scheduled to meet next month to decide whether to consolidate the cases and, if so, which judge should be assigned the monumental task. The job would include such key pretrial decisions as certifying a large class of plaintiffs to seek damages, a potential multibillion-dollar settlement, whether to dismiss the cases and what documents BP and the other companies might be forced to produce in court.

The AP review of disclosure statements shows the oil and gas industry's roots run as deep in the Gulf Coast's judiciary as they do in the region's economy. For example, one federal judge in Texas is a member of Houston's Petroleum Club, an "exclusive, handsome club of, and for, men of the oil industry."

Federal judicial rules require judges to disqualify themselves from hearing cases involving a company in which they have a direct financial interest, and some Louisiana judges already have done so. For example, U.S. District Judge Mary Ann Vial Lemmon in New Orleans, who reported ownership of BP stock, issued an order in early May that the court clerk not allot cases involving BP or related entities to her docket.

Another New Orleans jurist, U.S. District Judge Carl Barbier, said in court Friday he is selling his oil and gas investments -- which included Transocean and Halliburton -- to avoid any perception of a conflict. Barbier is presiding over about 20 spill-related lawsuits and some attorneys are recommending that he be chosen to oversee all cases filed nationally.

Still another judge in Louisiana, U.S. District Judge Eldon Fallon, recused himself because his son-in-law is an attorney representing several people and businesses filing suits against BP and the other companies over the rig explosion.

In many ways, the financial conflict rules are murky. For example, a judge does not have to step aside if the investments are part of a mutual fund over which they have no management control. Mere ties to companies or entities in the same industry, no matter how extensive, also don't require disqualification, according to legal experts.

"The specific rule forbids judges from hearing a case in which they have a financial interest. The more general rule forbids them from hearing cases in which their impartiality might reasonably be questioned," said Charles Geyh, an Indiana University law professor who has closely studied judicial ethics.

So a judge like U.S. District Judge Stanwood Duval of New Orleans would not have to disqualify himself even though he reported royalties from "mineral interest No. 1 and No. 2" in Terrebonne Parish, La., on his 2008 forms. Likewise for Senior U.S. District Judge William Barbour Jr. of Mississippi, who listed at least 30 oil and gas interests in three states including "McGowan Working Partners" and "Petro-Hunt Bovina Field," both in Mississippi.

Some judges have close ties to the energy industry that aren't for financial gain but still could raise questions of potential bias.

The judge BP wants to hear all of the spill-related cases, U.S. District Judge Lynn Hughes of Houston, for the past two years has been a "distinguished lecturer" focusing on ethical issues for the 35,000-member American Association of Petroleum Geologists.

Hughes is not paid a fee but does receive reimbursements for travel, food and lodging, said association spokesman Larry Nation. Hughes has appeared at petroleum geologist meetings in several Texas cities, in New Orleans and also in Cape Town, South Africa. He is scheduled to give a lecture later this month in Calgary, Canada, the oil and gas capital of that country.

"Under the circumstances, I can see why the questions are being raised," Nation said. "But one of the reasons Judge Hughes was chosen to be a lecturer is that he is known as a very ethical person. I would think his being an ethics lecturer for our organization would be a positive, not a negative."

In court papers, BP says that Hughes has the "experience and capacity" to handle the lawsuits and that Houston is the ideal location because most of the defendants' companies have headquarters or major operations there. BP spokesmen have repeatedly declined to comment on pending lawsuits.