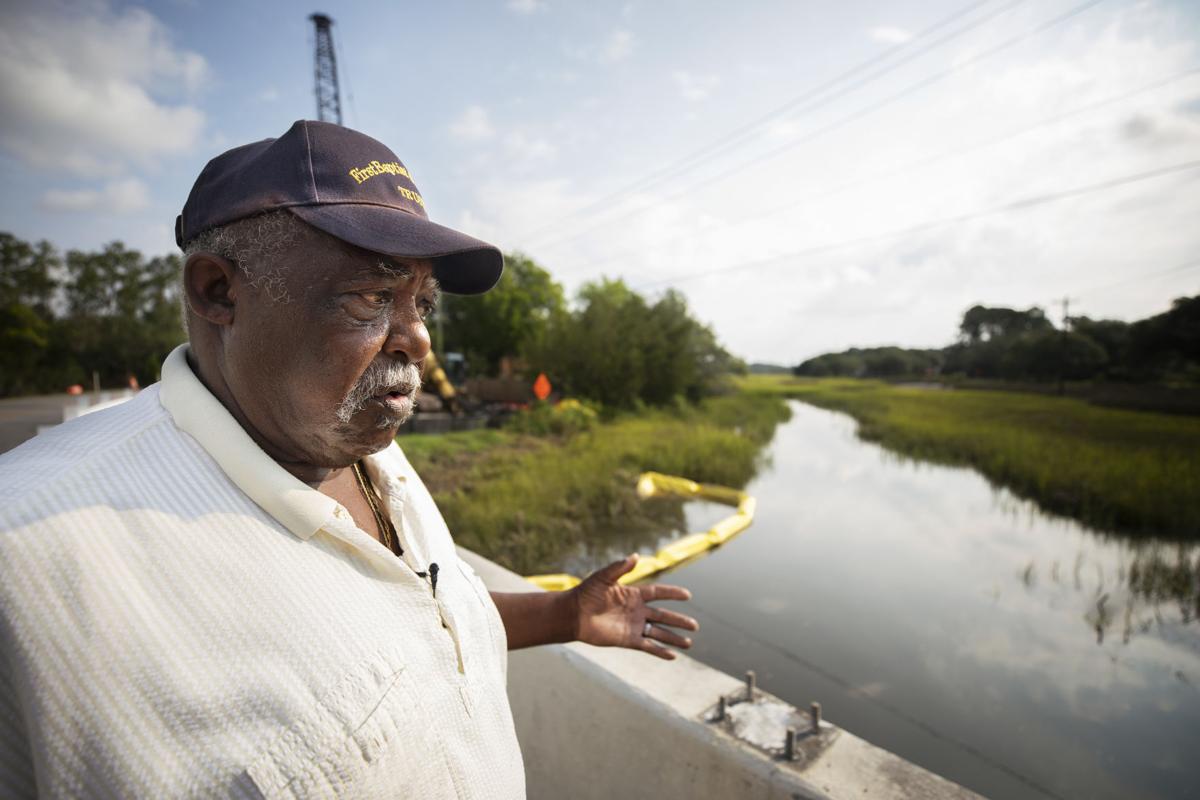 Ken Moore stands at the bridge over Ellis Creek on James Island on Friday, July 5, 2019, where he saved five teenagers from drowning 42 years ago. Lauren Petracca/Staff 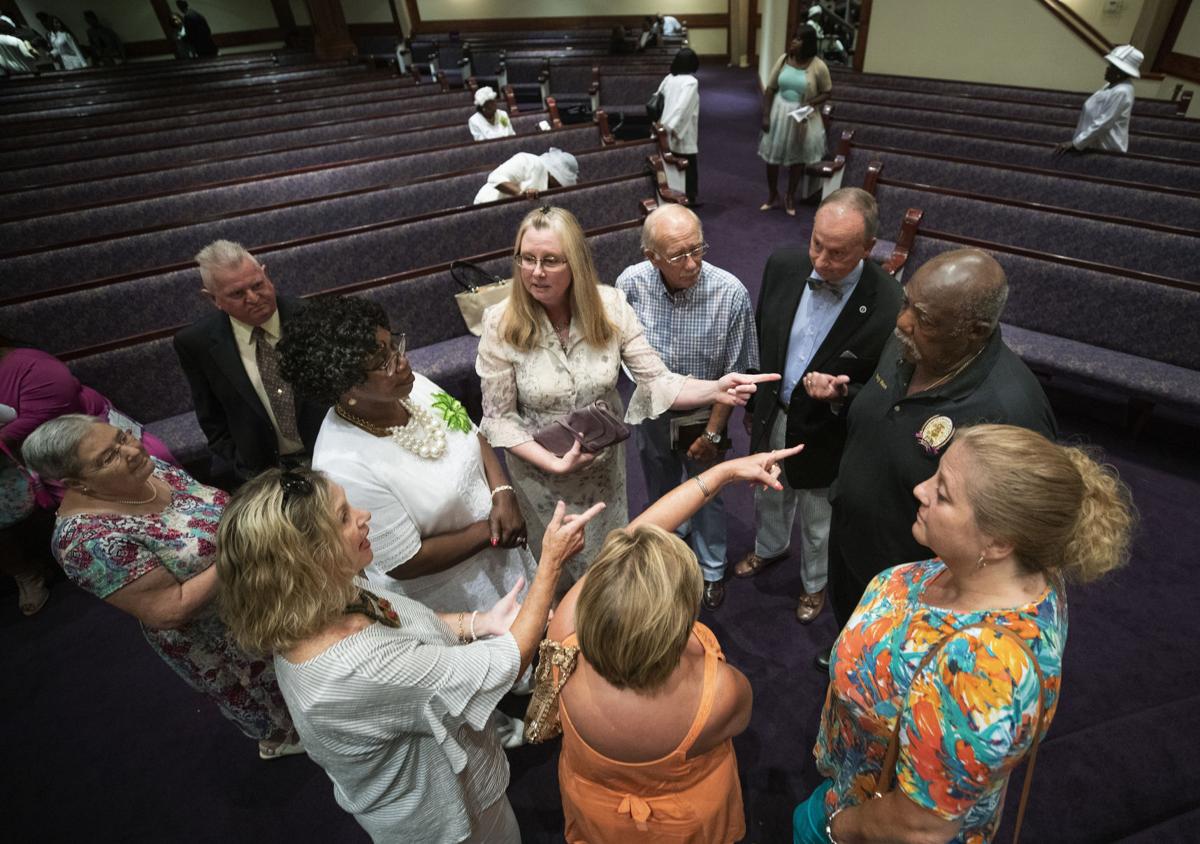 Susie Bowick (center) points to Ken Moore while retelling the story about how she survived a car accident that left her and four others submerged in Ellis Creek while they were teenagers. Three of the survivors were reunited with Moore, 42 years after he saved their lives, on Sunday, July 7, 2019, at First Baptist Church of James Island. Lauren Petracca/Staff 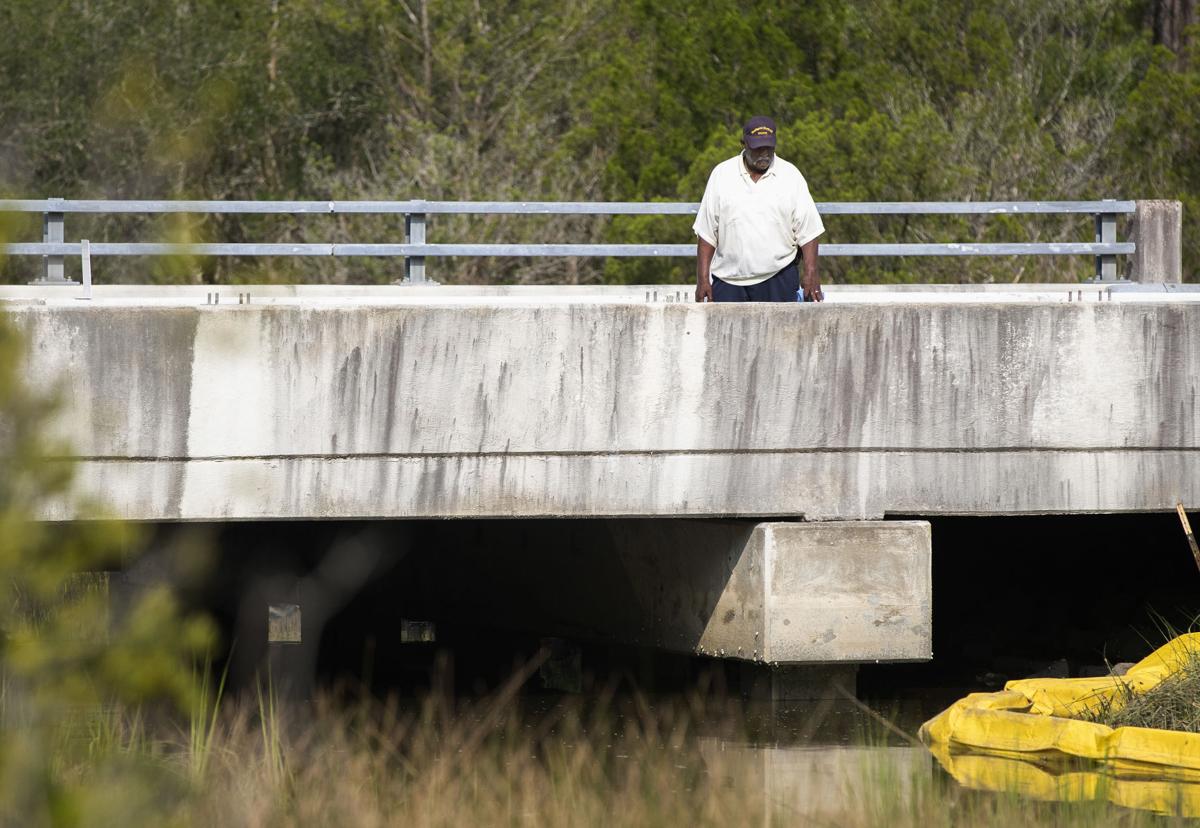 Ken Moore looks over a bridge at Ellis Creek on James Island while posing for a portrait on Friday, July 5, 2019. Moore saved five teenagers from drowning after their car plummeted into the creek 42 years ago. Lauren Petracca/Staff 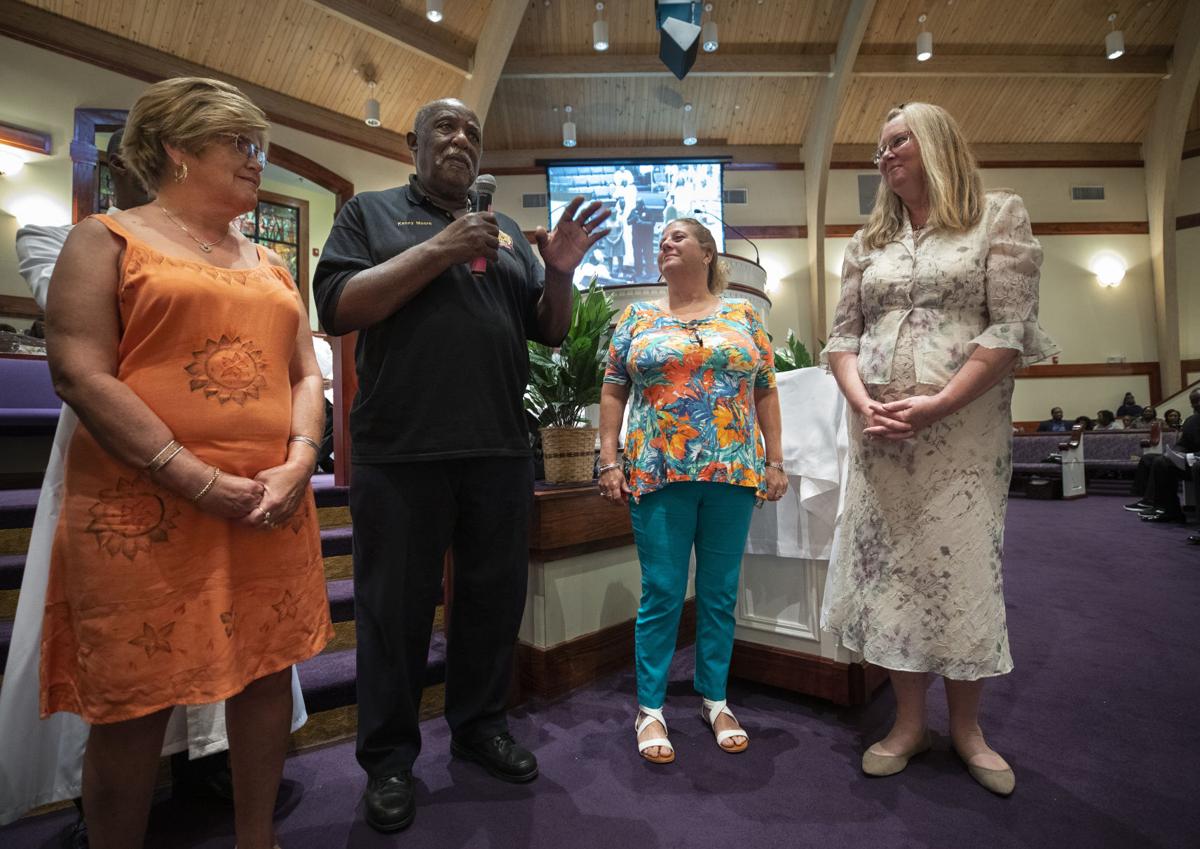 Ken Moore speaks at the front of First Baptist Church of James Island during service on Sunday, July 7, 2019, alongside Kim Jewell (from left), Nancy Farris and Susie Bowick. Over 40 years ago, Moore saved the women's lives while they were teenagers by pulling them out of a car they were riding in that flipped over and was submerged upside down in Ellis Creek. Lauren Petracca/Staff 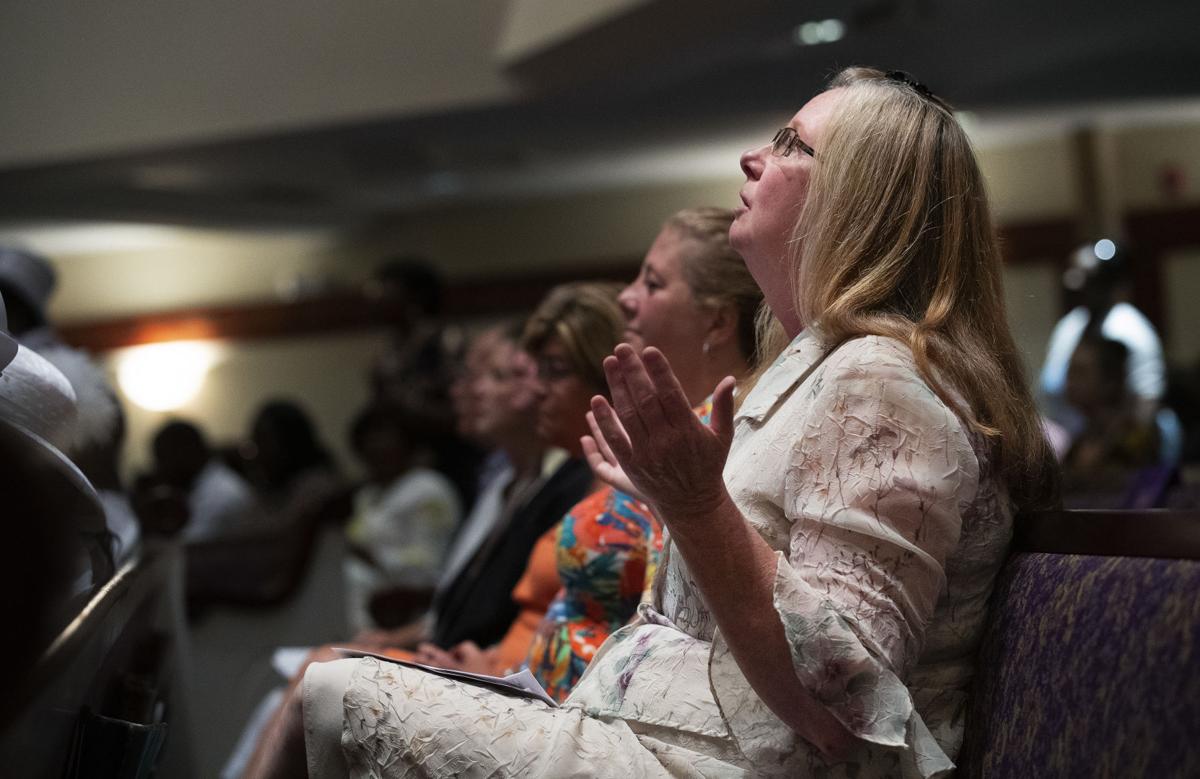 Ken Moore stands at the bridge over Ellis Creek on James Island on Friday, July 5, 2019, where he saved five teenagers from drowning 42 years ago. Lauren Petracca/Staff

Susie Bowick (center) points to Ken Moore while retelling the story about how she survived a car accident that left her and four others submerged in Ellis Creek while they were teenagers. Three of the survivors were reunited with Moore, 42 years after he saved their lives, on Sunday, July 7, 2019, at First Baptist Church of James Island. Lauren Petracca/Staff

Ken Moore looks over a bridge at Ellis Creek on James Island while posing for a portrait on Friday, July 5, 2019. Moore saved five teenagers from drowning after their car plummeted into the creek 42 years ago. Lauren Petracca/Staff

Five lives nearly ended four decades ago when joyriding teenagers in a two-door Buick Riviera flipped over a guardrail into Ellis Creek.

Upside down and stuck in the car, they were only minutes from drowning when a hero stepped in and saved them.

As a result, Susie Bowick would work in car window repairs and travel through 40 of the 48 continental states as a truck driver, accompanied by her little dog Buttercup.

Kim Jewell would retire after teaching day care and working at a nursing home in Charleston.

Nancy Farris would work in medical records at one of Charleston's hospitals.

Robert Alley would work in construction and live in Eutawville.

Billy Truelove would become a welder and move home to San Angelo, Texas.

“Billy told us, ‘We might as well start praying’ and that’s what we did,” Bowick said of being stuck in the car in what was then a rural part of James Island.

“They say when two or more pray, God answers your prayers. And Billy said, ‘Y’all, we might as well start praying.' ... If he didn’t say that I don’t know if God would have brought Ken to us to be honest with you."

Stories from the survivors paint the March 16, 1977, crash in a new light.

In the right place

It wasn't so simple a rescue.

Ken Moore, now 75, was 33 years old when he rounded Camp Road that Wednesday evening. A foreman at General Electric, he was heading toward his family's home on Ferguson Road when he heard his mother "hooping and hollering" on the bridge over Ellis Creek. His adrenaline started pumping.

"The tide was high, and I saw the four wheels standing out of the water," Moore said. "Immediately, I jumped in fully dressed and started tugging on the car door."

Moore's quick actions saved Bowick, Jewell, Farris, Alley and Truelove that day. Years later, Moore wondered what had become of the five teens and began searching for them.

“It was just the idea — where are they, what have they done with their lives?" Moore said. "I'm just curious is all. I helped save their lives. I was in their lives and stuff, and I was just wondering where are they? How are they doing? Did they have kids? Do they have grandkids?”

On Sunday, three of the five survivors reunited with Moore and attended a service with him at a James Island church only about 2 miles from where their Buick crashed into the water.

Bowick, Jewell and Farris had been walking around their neighborhood in Jamestown Estates that St. Patrick's Day eve when two guys drove by. Though they didn't know them, the girls got in the car for a joyride.

Bowick was three weeks away from her 16th birthday, Jewell was 15 at the time, Farris about 14. The girls hopped into the back seat, Farris behind Truelove, who was driving, Jewell in the middle, and Bowick behind Alley, who sat in the passenger seat.

"We were on Riverland Drive heading toward the bridge and I was sitting in the back seat — in the middle — and I remember looking and thinking to myself, 'He's going to hit that bridge,' " Jewell said. "I wasn't going to say nothing because being 15 you don't want to act like you knew everything. I didn't want to say anything. Sure enough, we hit the bridge."

Farris swears Aerosmith was on the radio when they crashed into the water, but none of the women could remember the song.

Now upside down and in the dark, the car began to fill with water.

"The water was coming in through the vents of the car, and we were all freaking out, trying to figure out how to get out," Farris said. "I remember us putting ourselves back to back trying to kick the windows and they wouldn't crack."

Jewell was wearing a heavy sweater and felt it weigh her down as water poured in. The girls remembered being tangled in wires.

In what she believed to be her last moments, Bowick envisioned her parents at their kitchen table reading about her death in the paper.

"They were in their younger days. They were in the old kitchen at the table and opened the obituaries," Bowick said. "That’s where my mind was breathing that little bit of hot air."

Jewell and Farris took turns taking breaths from the shrinking air bubble that remained in the car.

"I remember my last breath. I was like, that's it, there's no more air pockets. It was gone all of a sudden," Farris said. "Somebody grabbed my feet and pulled me up."

Outside the car, Moore searched for the door handle. It was underwater, near the pluff mud of the creek bed.

“They only had seconds to live. I know for them it was a very scary and life-threatening situation," Moore said. "Could you imagine being in a car and it filling up with water? A two-door car and you can’t even get out?”

The crowd that lined the bridge helped Moore by passing the teens safely to the shore. Jewell remembers getting to the curb, the lights and the first responders. The three girls were fine, but one of the boys was unconscious and received mouth-to-mouth resuscitation. They remembered the water that flushed from his nose — it resembled the foam that washes up on the beach.

The next day, the three girls went to school. Days later, Jewell and her mother would bring Moore a medal of St. Christopher, celebrated as the patron saint of travelers in the Catholic faith.

'No getting over it'

Born and raised in Charleston, Bowick now calls North Charleston home and spends most of her time traveling for work. She's worked in auto glass sales and delivered auto body parts. She looks back on the anniversary of the crash — March 16 — as a sort of birthday.

"I would not be alive if Ken did not jump in that water," Bowick said. "Five teenagers would have just been dead.”

Seeing cars submerged in water on TV shows causes her stress, and, like the other women, she considers herself a backseat driver. It took about 13 years before Bowick would even drive a car with power windows, preferring hand-cranked windows instead.

Looking back, 42 years later, Bowick said she doesn't think her life has been particularly eventful. She thinks it's shameful it took so long for the survivors to meet up with Moore, so she was grateful for Sunday's reunion.

Jewell, now 58, has been married for 35 years and goes by Kim Patrick. She still lives on James Island and drives over the Ellis Creek bridge regularly. It doesn't bother her.

She has a 30-year-old son and will soon have a third grandchild. She suffered a stroke about eight years ago, so her memory isn't all there. She's cautious of the people she drives with.

Patrick has kept in touch with Bowick and Farris, but she hasn't seen "the boys" since then.

Now 56, Farris has married and goes by Nancy Platt. She has a 36-year-old daughter and an 11-year-old grandson. She lives in the Camp Road area of James Island and has an office job at a local hospital.

“I haven’t done anything spectacular," Platt said. "I wish I did more so I could tell him, ‘You did such a great thing, you saved me, and I’m a doctor and I've saved so many people.’ ”

Platt gets nervous driving over bridges and thinks she has "a little PTSD." She doesn't let people drive over the speed limit when she's in the car with them.

Truelove became a welder before he died in 1989 at the age of 29. According to The San Angelo Standard-Times, he died in Dawsonville, Ga.

After Sunday's gathering, Moore said he felt good that he was able to reconnect with most of the living survivors.

"It was kind of a hassle, a little bit of work, but we made some contacts, made some phone calls," Moore said. "We got three out of the four, and that's a pretty good batting average."

Moore's friend Jimmy Craven reached out to The Post and Courier last year. After a story was published, Moore heard from Farris and stopped by her house later that day. He heard from Truelove's sister Bernadine next, who said her brother moved back to San Angelo and has since died. Then Moore visited with Alley in Eutawville. He later heard from Bowick.

"The last piece of the puzzle was Kim," Moore said.

He saw her Sunday for the first time since the days following the crash.

And just as importantly, he finally had some answers to questions that had dogged him for years. He learned that the five lives he saved ultimately led to the birth of five children, five grandchildren and at least one more on the way.