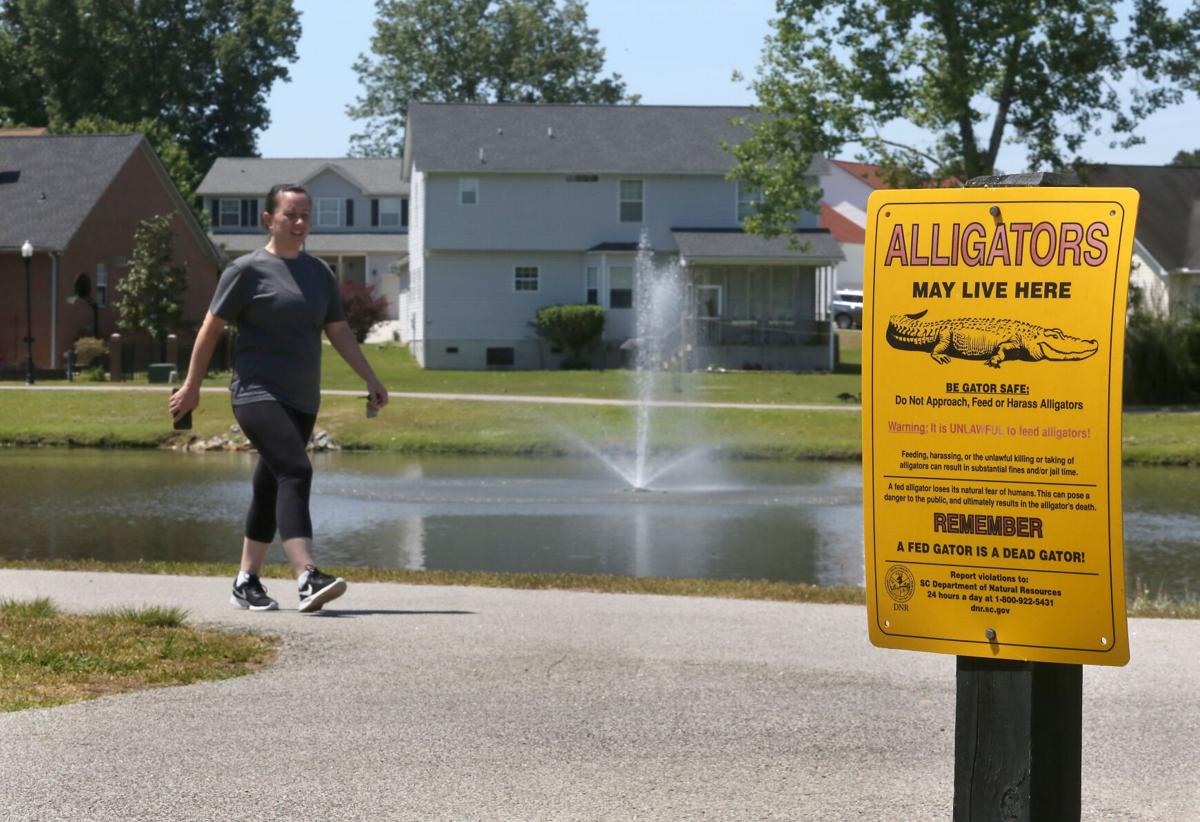 A woman walks past a sign by the lake behind Goose Creek City Hall warning people that alligators live in the lake and to not feed them. Brad Nettles/Staff 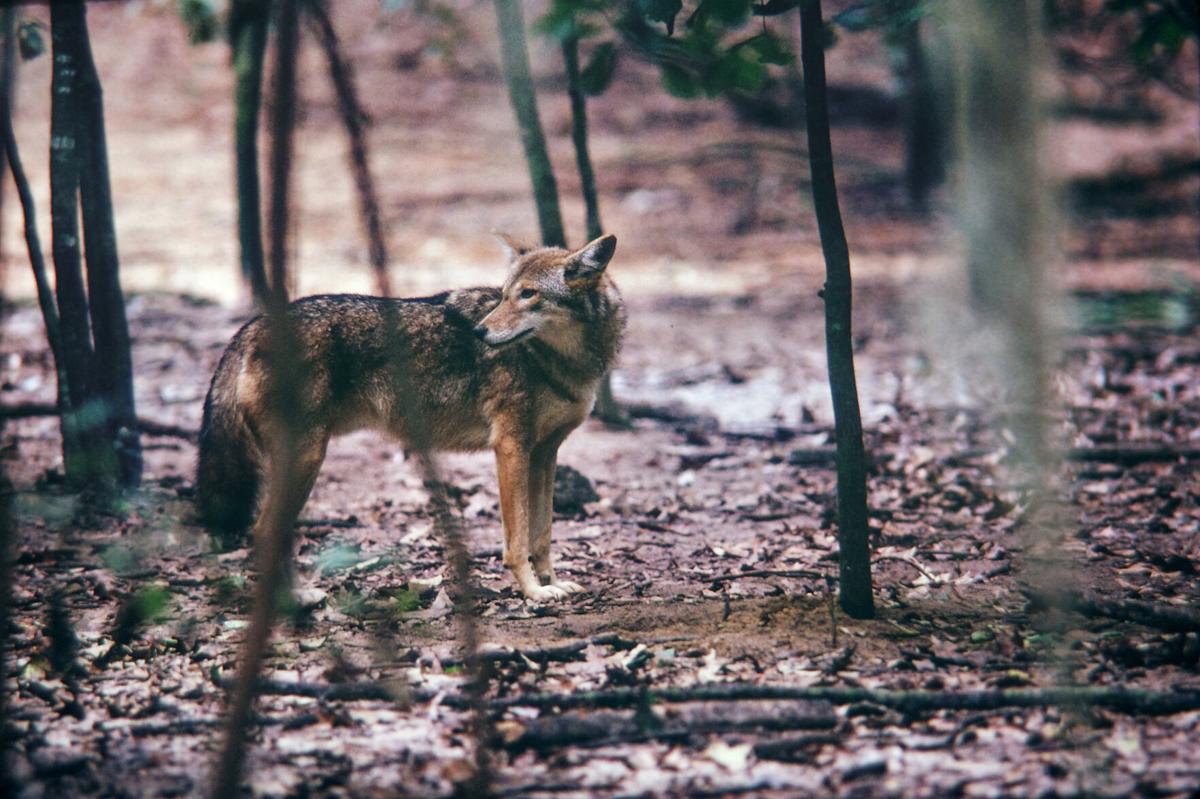 Coyotes in the Lowcountry have attacked and killed small pets. File/Phillip Jones/SCDNR 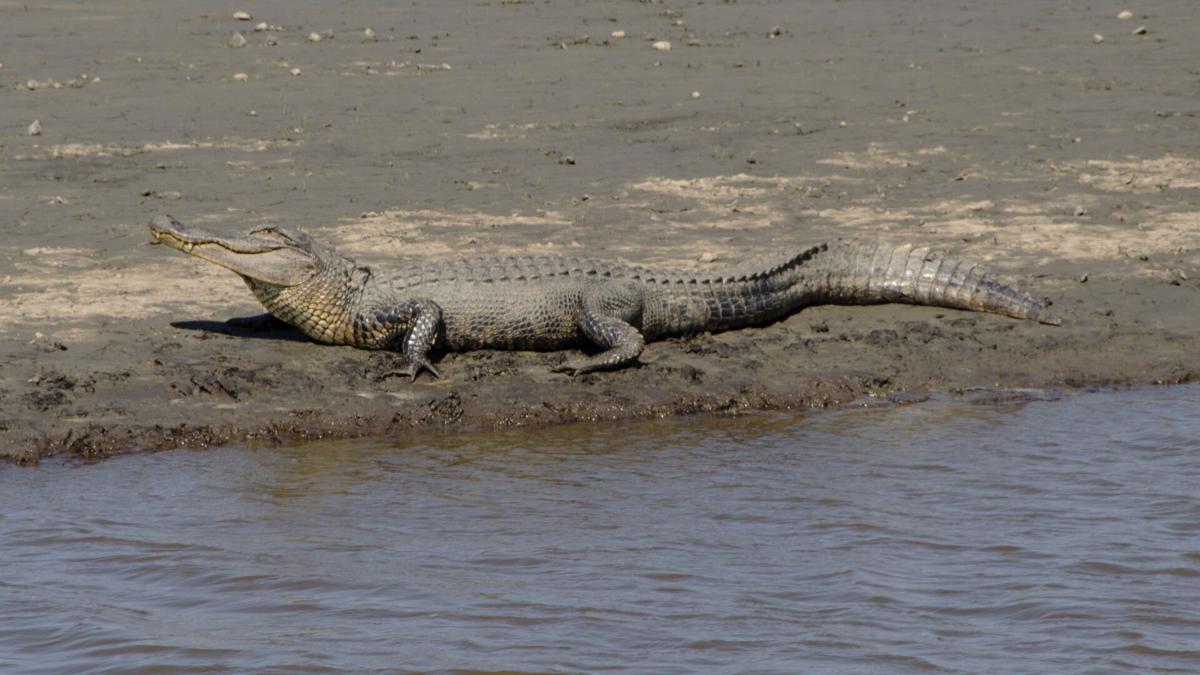 People are advised to be on the lookout for alligators and stay on established trails when walking near freshwater ponds, lakes or streams in the Lowcountry. File/SCDNR 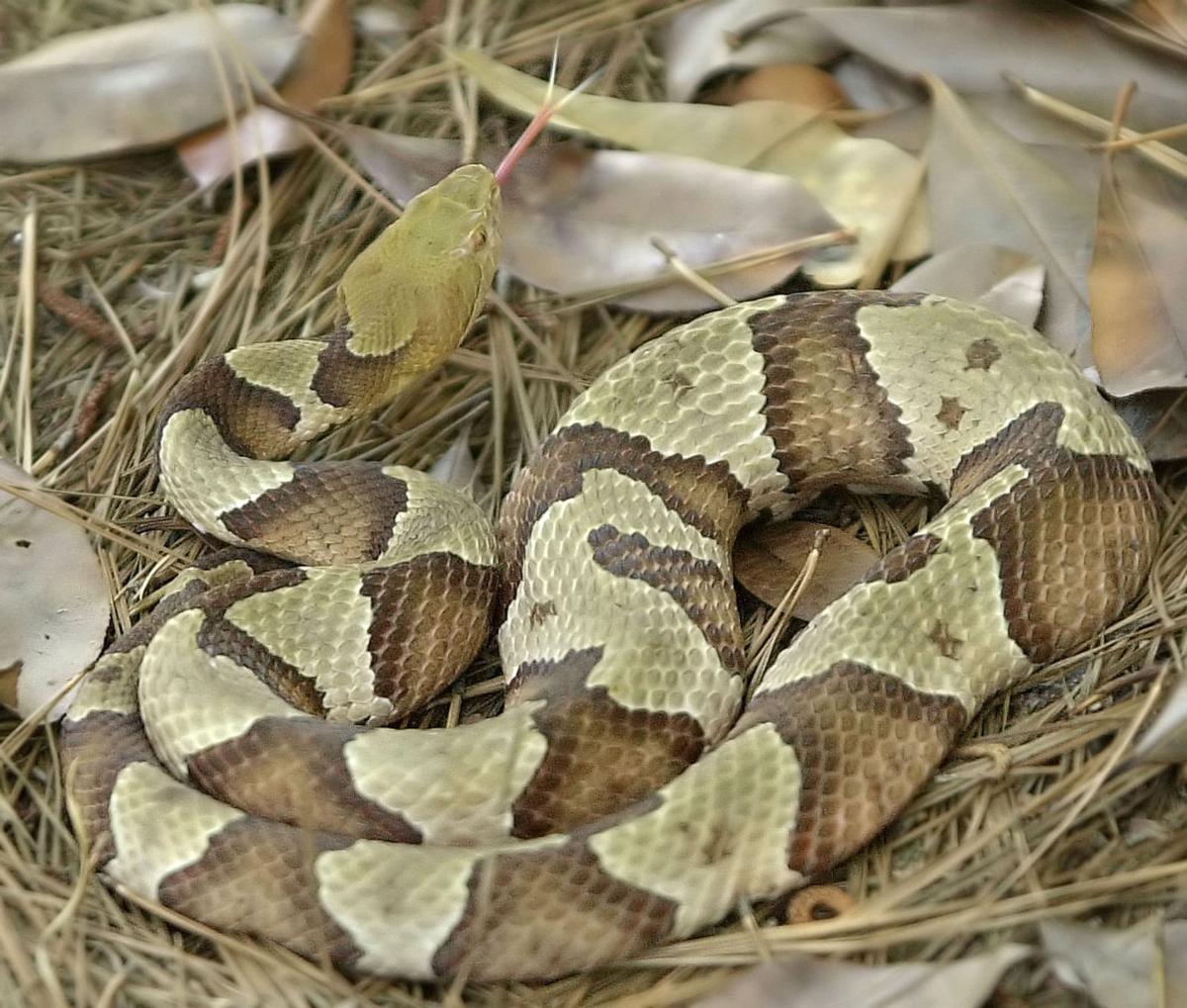 The copperhead varies in color from pink to tan, with dark-brown spots down its body. These snakes can reach a length of 4 feet, but adults are more likely to be between 2 and 3 feet long. It is the most common venomous snake in the state and, in a nod to its name, the head is typically a uniform copper color. However, juvenile rat snakes, which are harmless, are often mistaken for copperheads. Rat snakes tend to have small, narrow heads, while the copperhead has a large triangular head. The eyes are also a clue: Copperheads have vertical, catlike pupils while the rat snake has round pupils, like humans. File/AP 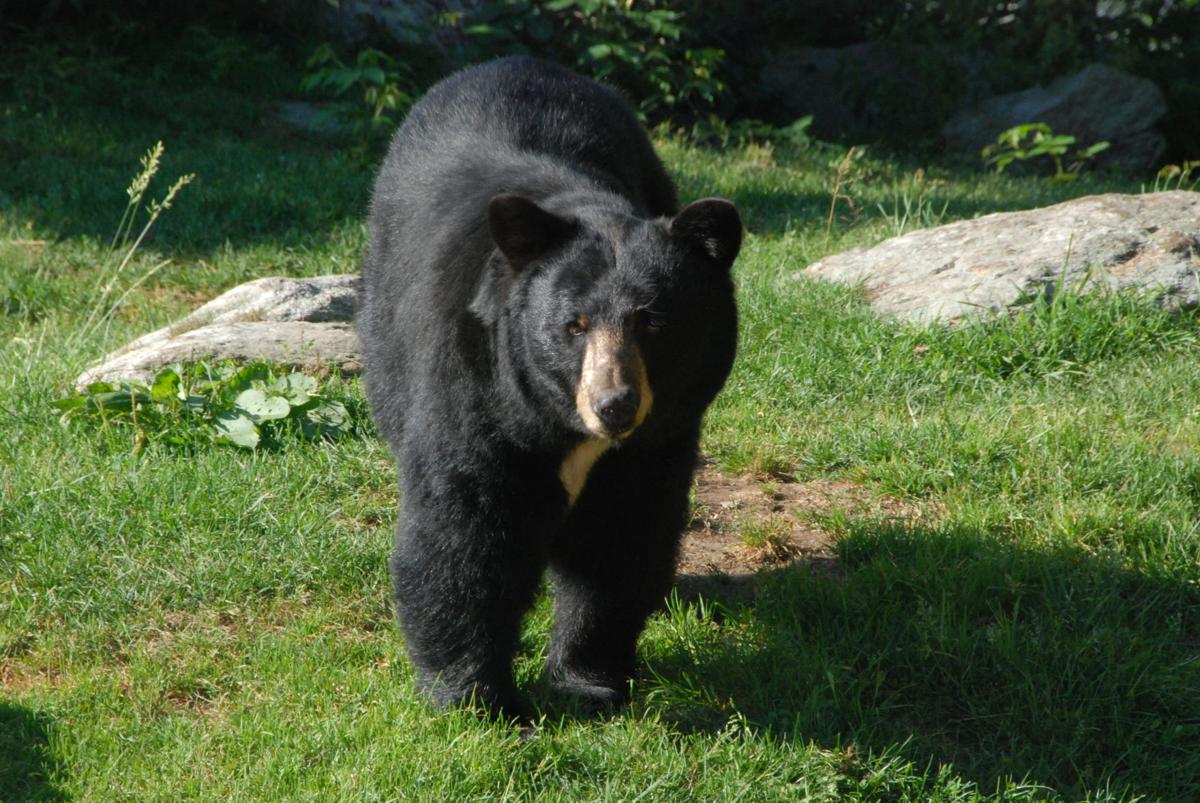 A woman walks past a sign by the lake behind Goose Creek City Hall warning people that alligators live in the lake and to not feed them. Brad Nettles/Staff

People are advised to be on the lookout for alligators and stay on established trails when walking near freshwater ponds, lakes or streams in the Lowcountry. File/SCDNR

FRIPP ISLAND — Officials with the S.C. Department of Natural Resources said a man has been charged with a misdemeanor after a photo posted online last month showed him holding the tail of an alligator.

The situation could have turned dangerous, and even deadly, like several others before.

Although groups and agencies like DNR work with communities to provide education and signage about alligator safety, the message still does not get through to all.

As the weather gets warmer and people begin to spend more time outdoors, DNR is offering tips for not only dealing with alligators, but other wildlife such as snakes, bears and coyotes.

Alligators have called South Carolina's freshwater sources home for many years. A boost in population and development in the state has increased the likelihood of encountering these dangerous reptiles.

Alligators typically do not chase people, but there are two likely scenarios in which one could move toward a human on land, DNR spokesman David Lucas said.

With a growing population, alligator-human encounters could become more common in SC

The water is where these reptiles feel the safest. So, if a person comes between an alligator and the water, it could pose a problem.

In addition, people might be approached by an alligator if they get too close to it. The animal will attempt to scare the person away, and that would likely involve it opening its mouth, hissing and moving forward a couple of feet if it feels threatened.

If found in either situation, people should move away from the alligator and the water, Lucas said. In most cases, the animal will calm down and go toward the water.

Lucas said people should keep their pets on a leash, pay attention to signs and stay on established trails when walking in areas that might have alligators, which include any freshwater source in the Lowcountry.

A state law on alligator management makes it unlawful to feed, entice or molest an alligator. People could face misdemeanor charges and a fine of at least $100, jail for up to 30 days, or both.

The state's first documented alligator-related fatality occurred in 2016, when an elderly woman in West Ashley wandered out of a care facility, fell into a pond and was killed by an alligator.

Two years later, a woman was fatally attacked by an alligator at a resort community on Hilton Head Island.

And last year, another fatal alligator attack was recorded in Charleston County, when a woman on Kiawah Island walked up to a pond to take pictures of an alligator and tried to touch it. It dragged her into the water to her demise.

Coyotes are not native to South Carolina, but first appeared in the Upstate in 1978. They are now present in each county in the Palmetto State. Some were illegally imported for hound running. Eastern migration also has resulted in their natural expansion in the state.

These animals are known to run away from people, but have attacked and killed small pets.

People are encouraged to keep their pets fenced in and watch them if the neighborhood is known to have coyotes roaming nearby.

Earlier in April, a 2-year-old Boykin spaniel was attacked by a pack of coyotes in the sand dunes on Isle of Palms. She received stitches in five places and is still recovering.

Mount Pleasant resident Robert Harris said in January coyotes were to blame for the death of two of his cats.

"It didn't used to be a problem," Harris said. "You could let a pet outside and didn't have to worry about it."

Coyotes are adaptable and thrive in suburban environments. There have been sightings in other parts of the Lowcountry, including on Sullivan's Island and in the northern areas. One was captured in January in the bathroom at Cane Bay Elementary School in Berkeley County.

DNR has called on hunters to help control the coyote population throughout the state. Although individual municipalities have their own rules, DNR does not require a hunting license or permit for people to shoot coyotes on their property within 100 yards of a home.

Night hunting is permitted on registered properties or with a depredation permit.

Now is the time of year when South Carolina's largest land mammals, black bears, begin to leave their dens. They are most prevalent in the Coastal Plains and Piedmont areas, but can also be found in Carolina bays and wetlands. Sighting have been reported in all 46 counties.

Once black bears come out of hibernation, they begin  feeding and putting on the weight they lost over the winter.

"They may have cubs coming out with them," Lucas said. "So sightings will increase at this time of year because the bear's movement and activity will increase."

It's important to note that bears are usually shy and not aggressive toward people. But they are opportunistic and will feed on whatever food is readily available.

Their natural diets include plant matter, insects, meat, berries, and nuts. But since they search for easy food, residents in the Upstate should secure their garbage, bird feeders and pet food to prevent bears from stopping by their homes.

DNR said the most common human-bear conflicts include unsecured food.

"The mere presence of a black bear does not necessarily represent a problem," DNR said in a news release. "Most bears are just passing through, but if there is an easy meal to be found, they will take advantage of it."

The best way to deal with a wandering bear is not to give it a reason to hang around. Removing food will reduce potential issues with bears in residential areas.

Snakes also come out of hibernation and become more active when the ground warms up in the springtime. So people should be careful when cleaning up any leaves, wood or debris that could have piled up in the yard during the winter. That is an inviting habitat for copperhead snakes.

It is a good idea to use gloves when clearing piles outdoors, plus watch where you step and put your hands. Unlike rattlesnakes, copperheads don't give a warning before they strike.

"If you're out camping or in the woods, state park, anywhere around like that, or even in your yard, I always tell people to wear shoes," Lucas said.

A lot of times, snakes, like alligators, are not looking to strike a person. People are too large for them to consider prey.

"But if you're walking around in the dark barefoot, you might step on a snake," Lucas said. "If you step on the snake, it will strike."

Many snake species camouflage themselves for protection and to catch prey.

Experts at the Savannah River Ecology Laboratory encourage people to step back if they encounter a snake. If out on the road, simply drive around the snake or let it pass.

Only 38 snake species have been found in South Carolina, according to the Clemson Cooperative Extension Service. Six of the 38 are venomous, including the copperhead and cottonmouth.

The most commonly seen snakes in the Palmetto State include black racers, corn and rat snakes. Their role includes keeping rodent and pest populations under control.