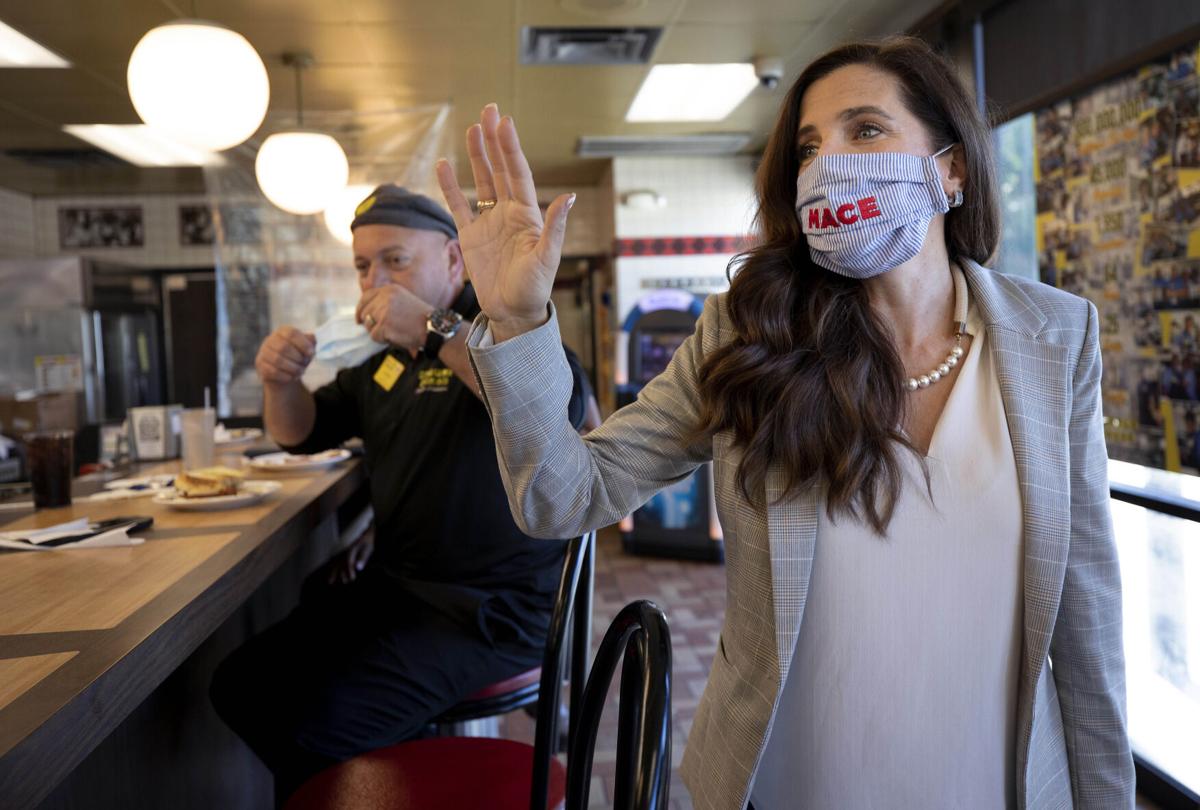 Republican state Rep. Nancy Mace greets workers and guests at the Waffle House in Ladson, where she once worked, where she delivered her acceptance speech in the 1st Congressional District race Wednesday November 4, 2020. Grace Beahm Alford/Staff 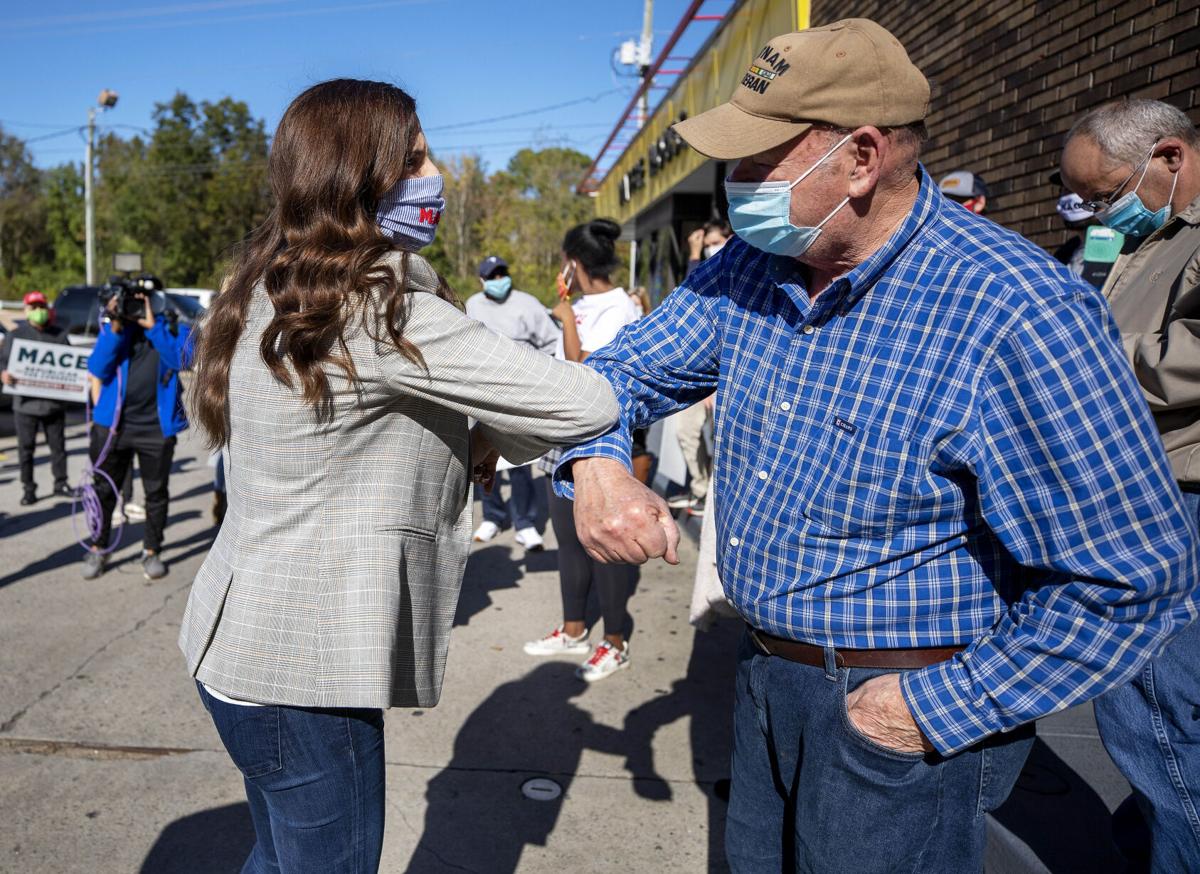 Republican state Rep. Nancy Mace thanks supporters at the Waffle House in Ladson, where she once worked, as she accepts winning the 1st Congressional District race Wednesday November 4, 2020. Grace Beahm Alford/Staff 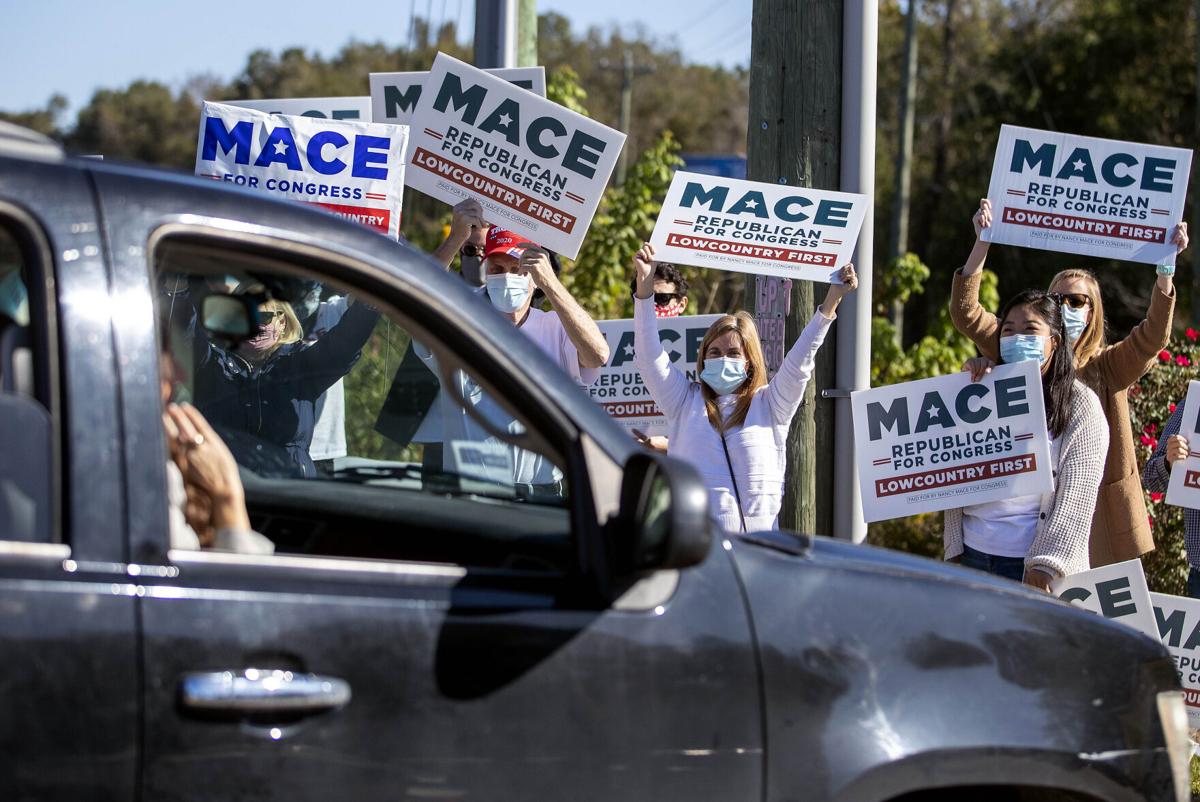 Republican state Rep. Nancy Mace arrives at the Waffle House in Ladson, where she once worked, to deliver her acceptance speech for the 1st Congressional District race Wednesday November 4, 2020. Grace Beahm Alford/Staff

LADSON — Nancy Mace barely slept or ate on election night, so a trip to Waffle House for coffee and breakfast was in order.

Following her historic upset win against Democratic U.S. Rep. Joe Cunningham, she was energized and excited.

But she was also hungry and reflective.

She returned to the same restaurant where she was once employed as a lost, confused and unsure teenager.

"When I dropped out of school at the age of 17, this was where my first job was," Mace said Wednesday during a victory press conference.

"At that time of my life, I didn't know what my future would hold," she said, adding "I wanted to finish where it all started."

Now she feels it's time to make some new memories.

Mace, a state lawmaker from Daniel Island, scored the state's biggest upset win Tuesday, knocking off Cunningham, a one-term incumbent, in the state's coastal 1st District that Democrats wanted to solidify as blue.

The Associated Press called Mace's win at 2 a.m. Wednesday morning, even as the count remained incomplete.

As of 5 p.m. Wednesday, she led by more than 10,000 votes. By comparison, Cunningham stunned South Carolina with his narrow 4,000-vote victory in 2018 that managed to flip a district that had been held by Republicans for 40 years.

Mace upset the Democratic congressman by securing 51 percent of the vote.

Her victory joins a red sweep in South Carolina in which the Statehouse carried numerous GOP gains and also from across the nation where Republicans took seven congressional seats away from Democratic incumbents.

Despite the latest vote totals, Cunningham did not concede the race. He issued a statement early Wednesday morning alleging there were "tens of thousands of ballots outstanding across the district."

The message continued, "Both candidates have agreed that every ballot must be counted and every voice heard before an election result is called.”

His campaign did not immediately return calls seeking comment about where that figure came from, though Dorchester County did have more than 13,500 absentee ballots not included in the original count on election night because of a printing error.

Cunningham's challenge would be a long shot. He would have to net at least 86 percent of the outstanding votes to tie the race. Currently, Mace is leading in Dorchester County.

During her Waffle House appearance, Mace thanked the congressman for his service and said she would rather have seen him simply step away.

"I am disappointed to read that statement," she said, adding that the voters have spoken.

"When they're all said and done and counted, I believe we'll have an even larger victory than we do right now," she said.

The 42-year-old Daniel Island single mother and first female graduate of the The Citadel's Corps of Cadets made history of another kind Tuesday. She is the first female to win the 1st District seat and will become South Carolina’s first woman in Congress since Democrat Liz Patterson represented the Greenville area beginning in the late-1980s.

Gibbs Knotts, a College of Charleston political science professor, said having a GOP president and senator on the ballot helped carry the momentum in her favor.

“(Mace) managed to ride the coattails in some respect," Knotts said. “The underlying fundamentals matter, and this is a district that has an underlying Republican identity.”

Many national political experts considered the 1st District race to be a toss-up until the final months of the campaign when the nonpartisan Cook Political Report switched it to lean toward a Democratic victory.

In the final push of her campaign, Mace outraised Cunningham, 38, by more than $500,000 in the last fundraising quarter. She netted national support from Trump, Vice President Mike Pence and his wife Karen Pence, and former S.C. governor and ex-United Nations ambassador Nikki Haley.

The S.C. GOP began discussing plans for a “1st District reclamation project” one month after the 2018 election targeting the district’s voters in Charleston, Berkeley, Dorchester, Colleton and Beaufort counties.

It worked, in part, because many Democrats didn't do as many in-person campaign events and strategies out of caution for the novel coronavirus spreading in South Carolina.

"This is the fundamentals, you have to be getting out there knocking on doors and meeting the voters," S.C. GOP Chairman Drew McKissick said. "It's a matter of organizing. Nancy did a great job and raised money and we got our message on TV."

While Cunningham, out of caution for the COVID-19 pandemic, was mostly hosting virtual campaign events, Mace was walking in neighborhoods and introducing herself to voters nearly every week.

Notably, much of Mace's campaign relied heavily on this type of rhetoric and stoked the political divisions that have grown between Republicans and Democrats since the 2016 election.

Mace's campaign tried to dismantle Cunningham's reputation as a bipartisan problem solver by advertising that he voted with U.S. House Speaker Nancy Pelosi around 90 percent of the time in Congress.

Additionally, they attempted to tie him to "Liberal California Democrats" by claiming he supported a 2020 Department of Defense mandate to make Marine Corps training gender neutral and put Parris Island — which is located in the Beaufort County portion of the 1st District — at risk of closing if they can't meet the demand.

Despite Cunningham's attempts to throw the claims to the side, the attack stuck. Mace carried Beaufort County, home to retiree-rich Hilton Head Island, on election night.

Mace said Wednesday that her first priority will be to save Parris Island. She also said she wants to join the House Transportation and Infrastructure Committee to concentrate on bridge and road needs in coastal communities.

"My job starts right now," Mace said. "I want to unite the Lowcountry and rebuild the Lowcountry, South Carolina and the nation."