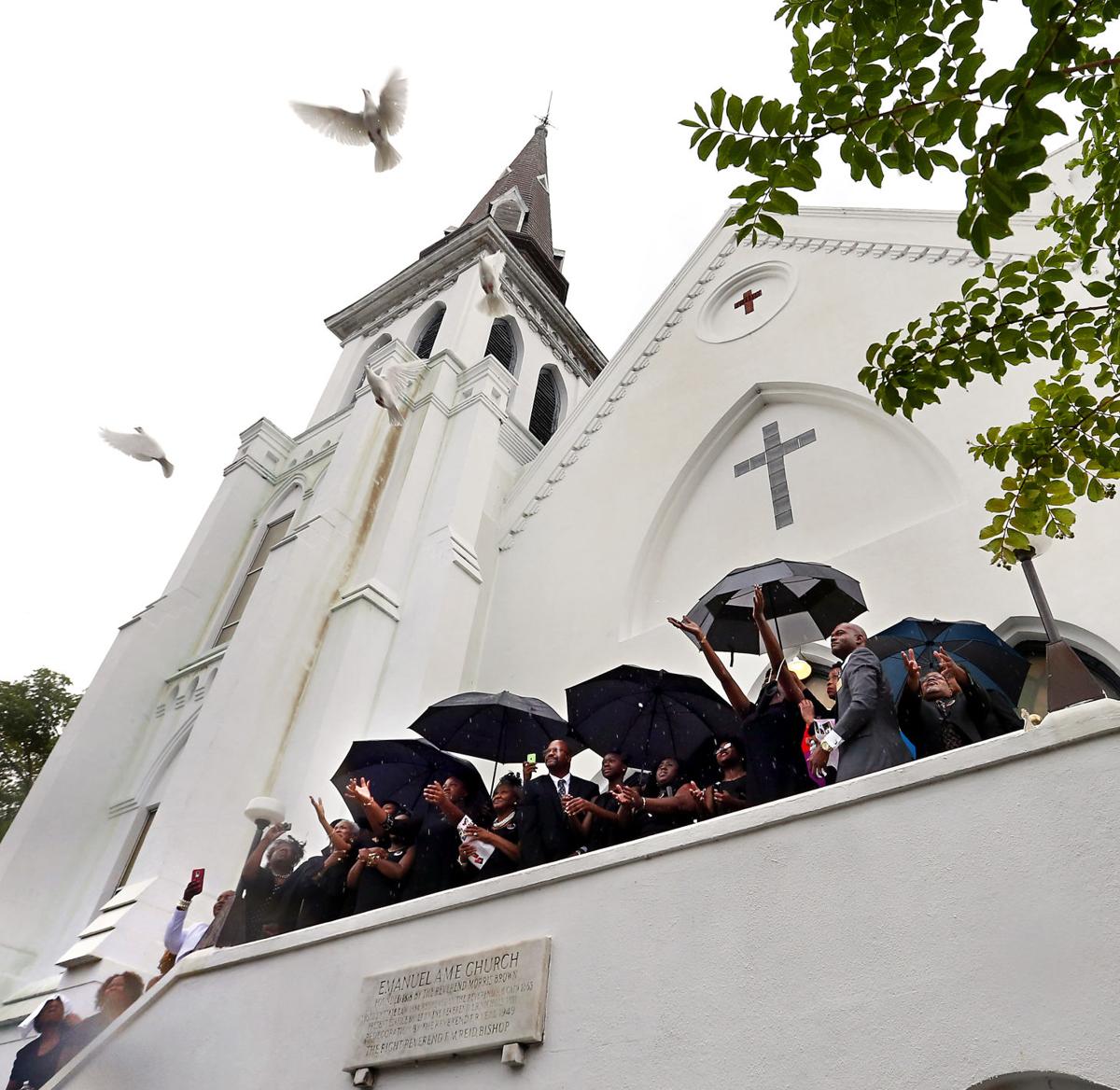 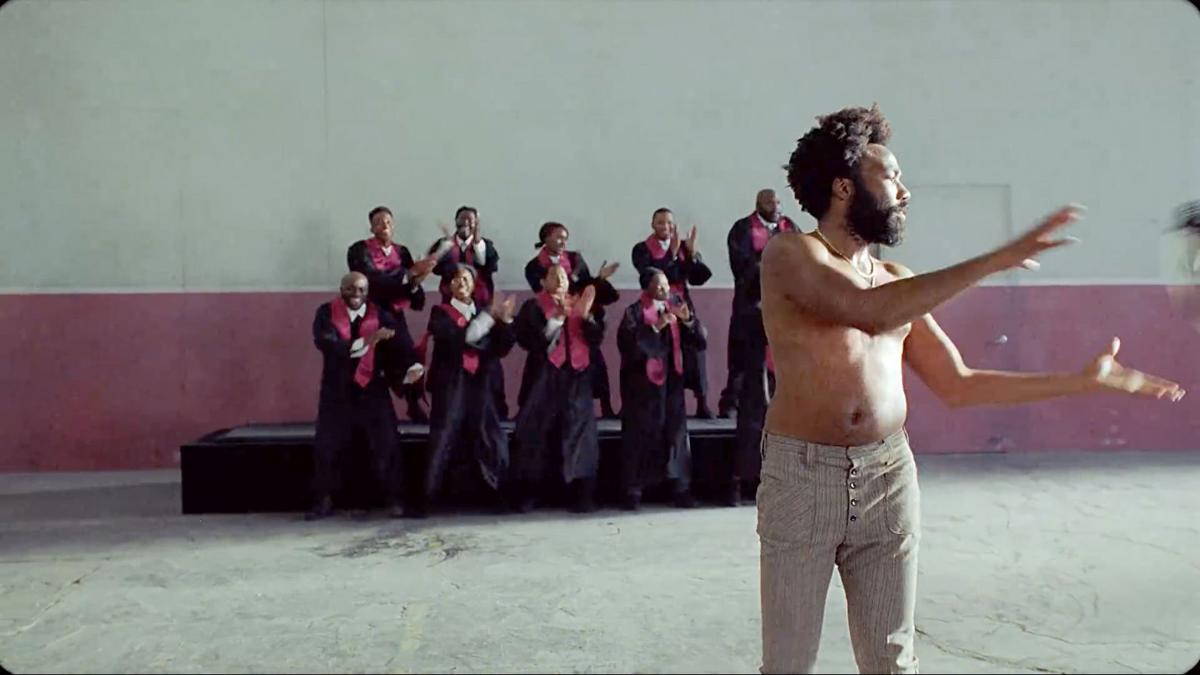 A still image from the video of "This is America" by Childish Gambino featuring a violent scene that evokes the mass shooting at Emanuel A.M.E. Church in Charleston. 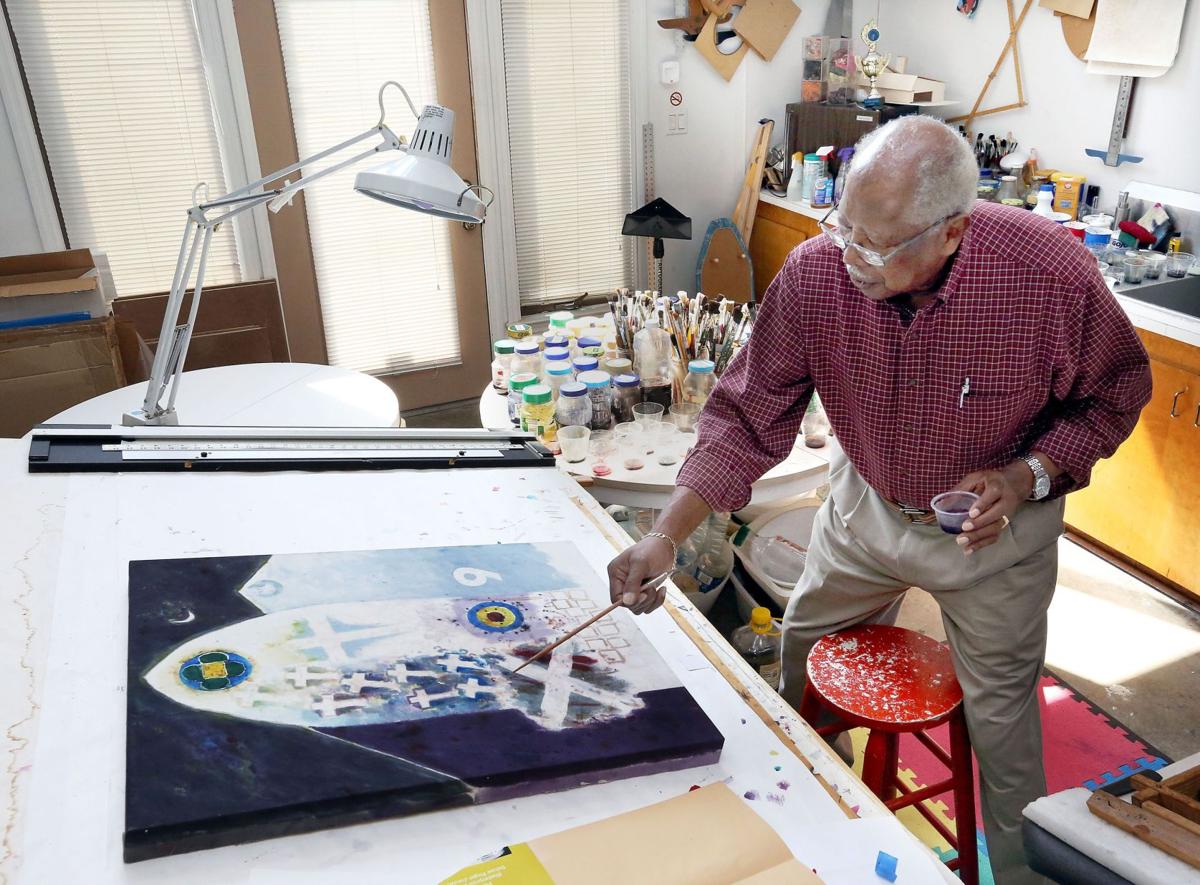 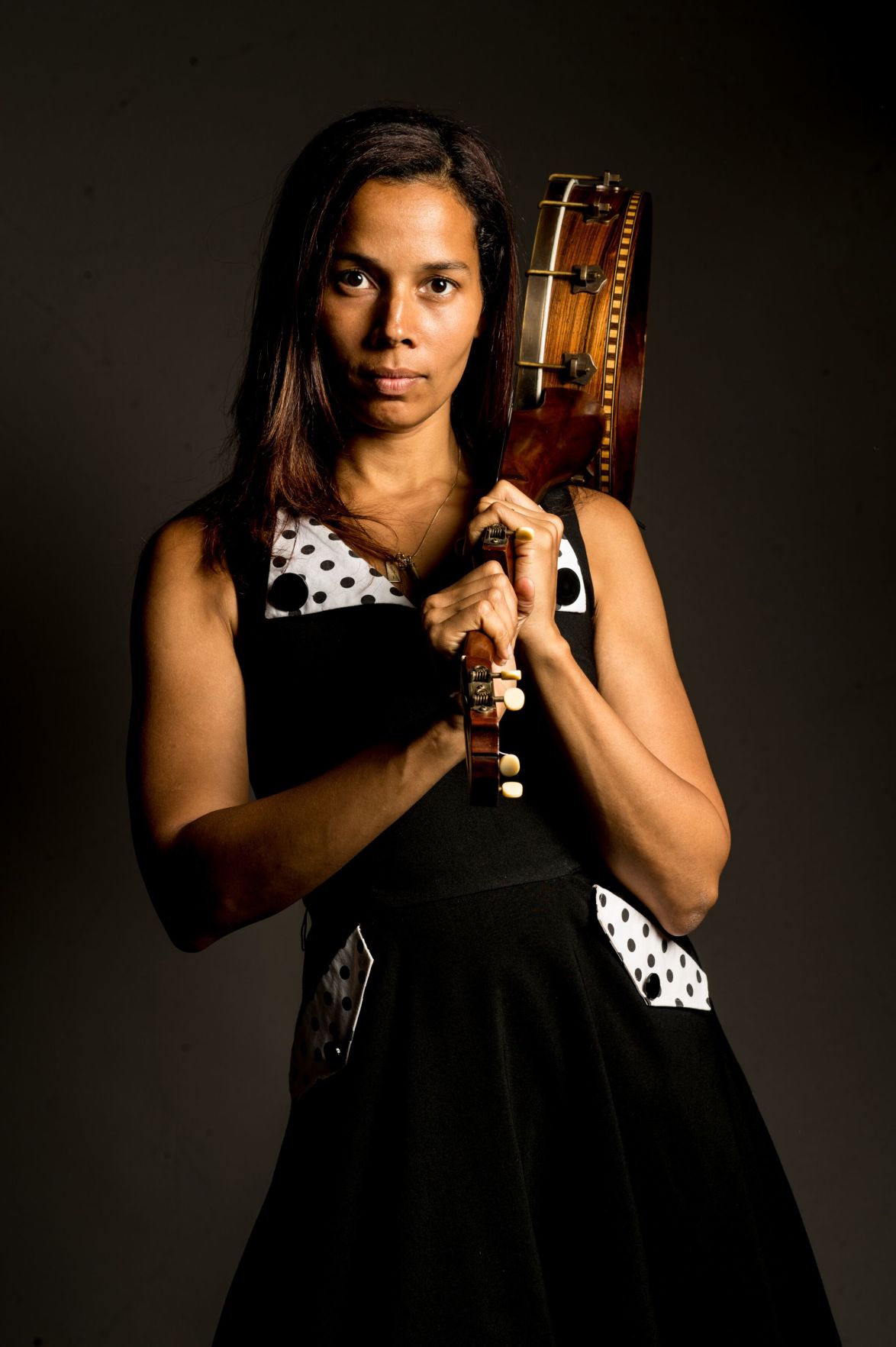 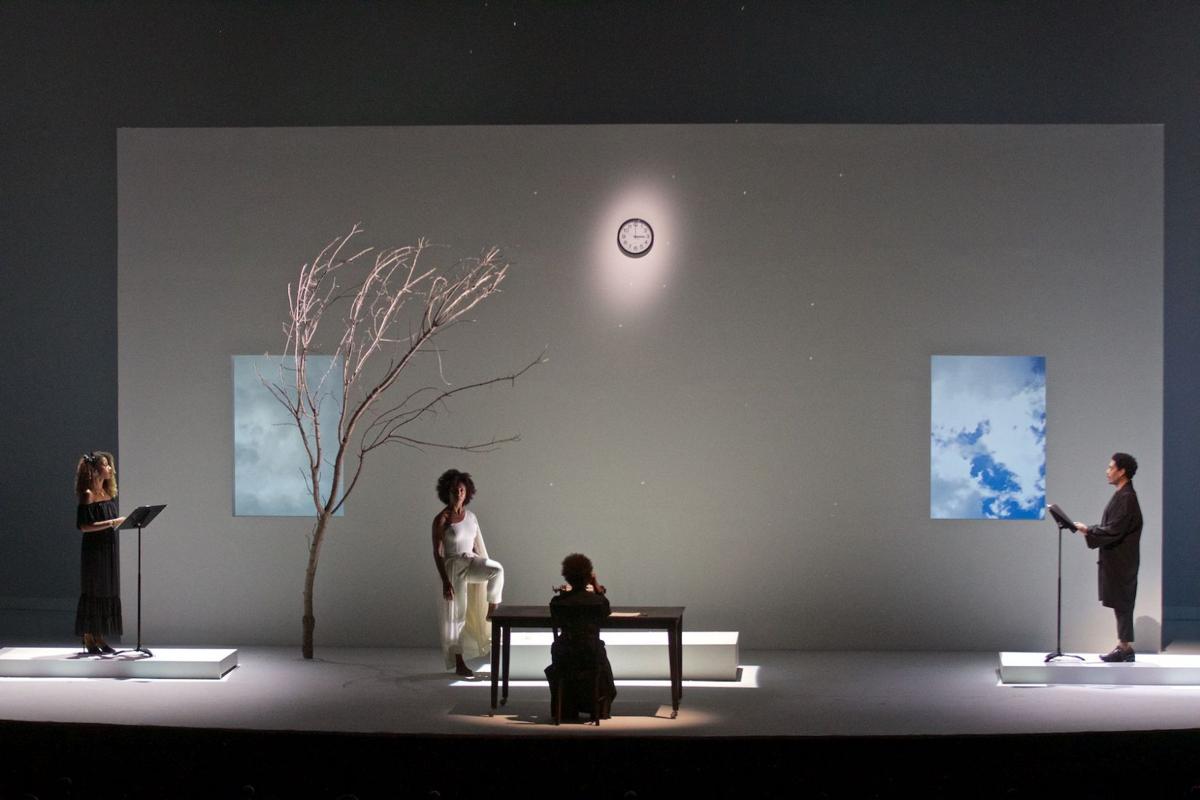 A scene from Carrie Mae Weems’ “Grace Notes: Reflections for Now,” inspired by the church shooting. 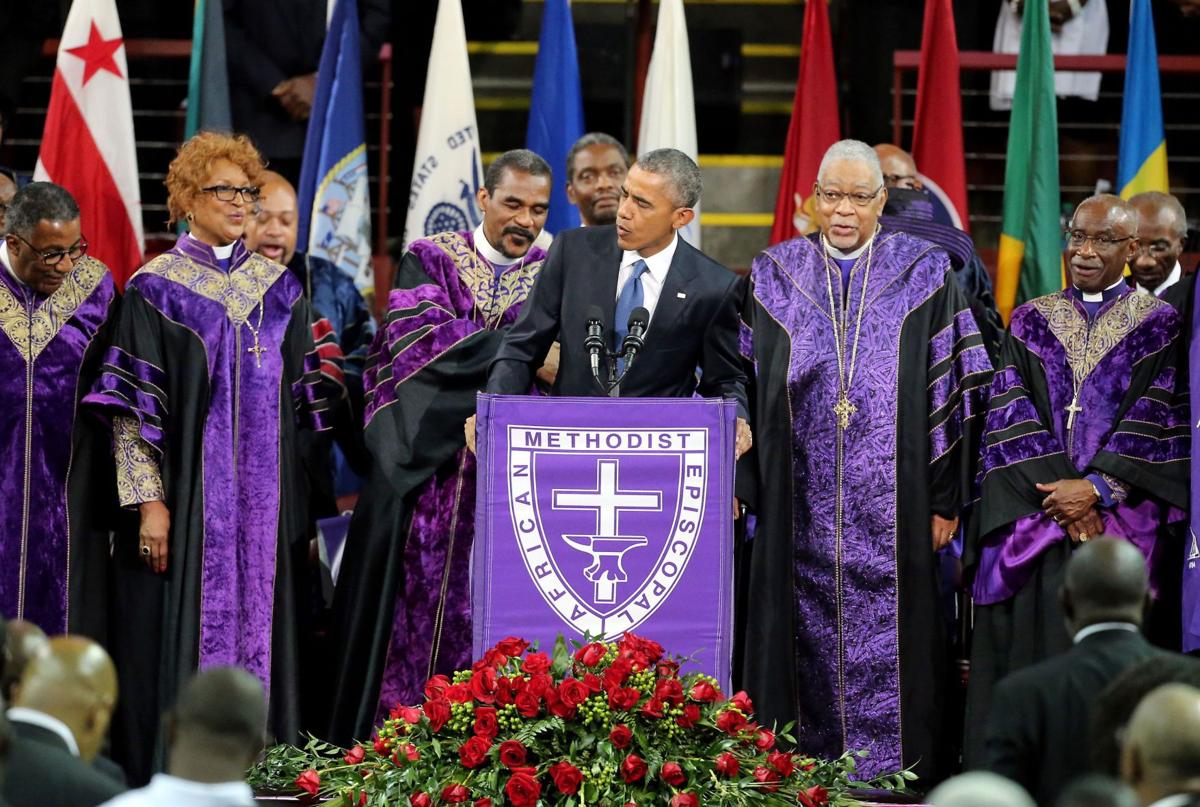 President Barack Obama sings "Amazing Grace" during a service honoring the Rev. Clementa Pinckney on June 26, 2015. Pinckney was among those killed in the Emanuel AME Church shooting. File/Grace Beahm Alford/Staff 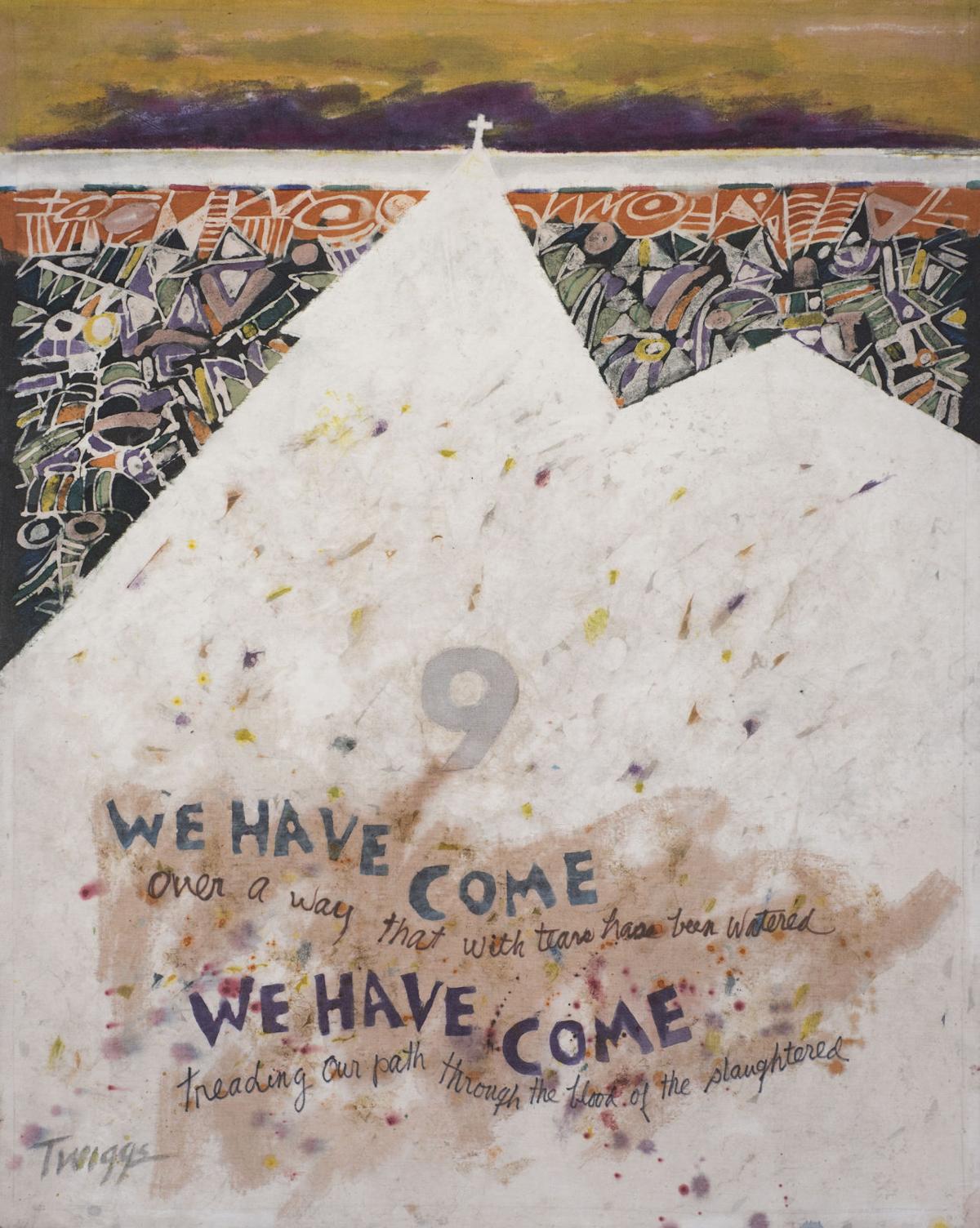 A still image from the video of "This is America" by Childish Gambino featuring a violent scene that evokes the mass shooting at Emanuel A.M.E. Church in Charleston.

A scene from Carrie Mae Weems’ “Grace Notes: Reflections for Now,” inspired by the church shooting.

President Barack Obama sings "Amazing Grace" during a service honoring the Rev. Clementa Pinckney on June 26, 2015. Pinckney was among those killed in the Emanuel AME Church shooting. File/Grace Beahm Alford/Staff

Sometimes an event is so profound, so remarkable, it captures the imagination of many, including those who were not impacted directly.

Sometimes such an event is so traumatic that it ruptures the collective psyche and causes a whole nation to wonder about itself.

The Triangle Shirtwaist Factory Fire of 1911 did this. The 1963 bombing of 16th Street Baptist Church in Birmingham, which left four little girls dead, did this. Columbine did this, and then Sandy Hook, then the Pulse nightclub, and later Parkland. 9/11 did this.

And the Emanuel AME Church shootings did this, too.

"Some events are so egregious, so in opposition to social morality, that they became symbols of the need for social change," said Von Bakanic, a sociology professor at the College of Charleston. And it's often the artists who first offer "a set of ideas about why this is wrong and what happens if we don’t stop it."

When the tension between a dangerous ideology and the values of a just society becomes intolerable, artists take charge, Bakanic said. "They set up the direction of a new ideology."

That tension has caused many social eruptions. Women garment workers locked inside a dangerous building with no way out except through the windows to their death shocked the nation. Four young lives destroyed by those who viewed African Americans as the enemy shocked the nation. Young men with minds so twisted they chose to fire semi-automatic weapons at students in school shocked the nation. Terrorists who perverted Islam and believed that mass murder would bring them a heavenly reward shocked the nation.

How could someone welcomed into a Bible study class shoot nine people dead, just like that?

After the fact, we can learn much, we can investigate, gather information, piece together a motive, contextualize the violence. But still, we are left with an essential enigma, an unanswerable question.

And so the artists get to work, for this enigma is part of their domain. The artists write songs and poems and books, they make paintings and sculptures, they peer into the soul of America and depict what they see, they raise more questions, they challenge the rest of us to think deeper, they rant and rave, laugh and cry, and sometimes cause us to do the same.

This is how Emanuel has found its way into popular culture. Four years later, the shooting remains — and will always remain — one of those watershed moments we will forever ponder.

Timing is everything, Bakanic said.

"You have to consider the socio-cultural history at the time of the event," she said. "Emanuel came at a particular moment in history: Obama was president, and there was a tremendous surge in hate groups in response to that.

"And the number of hate groups has been increasing ever since.

The shooting came at a moment when many in the country were debating whether we were part of a "post-racial society," Bakanic observed. Yet large racial issues remained unresolved, and this galvanized the nation's attention and grief, prompting Americans to ponder their condition, and motivating artists to take action.

President Barack Obama pondered the status of the nation when he delivered the eulogy at the Rev. Clementa Pinckney’s funeral and sang a famous hymn.

Childish Gambino seems to have pondered it when he made the video for his hit song “This is America.” In it, he fires a machine gun blast at a church choir, an oblique reference to Emanuel, many have said.

Leo Twiggs, a batik artist in Orangeburg, couldn’t escape it. Here was yet another example of African Americans targeted by an extremist, another set of victims, another consequence of the nation’s failure to reconcile its history with its declared values. Twiggs got to work making a series of nine paintings, partly to work through his distress, partly to depict the power of community, the ways in which the sins of the past can be turned into a cross of redemption — if only we would make the effort.

Rhiannon Giddens was thinking about the shooting when, in exasperation, she recorded “Cry No More” in the sanctuary of United Congregational Church in her hometown of Greensboro, N.C., with help from a choir and a drum. The song recounts all that black people in America have endured over the centuries:

And now, Giddens is telling us, add Emanuel to the list.

"The massacre at the AME church in Charleston is just the latest in a string of racially charged events that have broken my heart," she said shortly after the shooting. "There are a lot of things to fix in this world, but history says if we don't address this canker, centuries in the making, these things will continue to happen. No matter what level privilege you have, when the system is broken everybody loses. We all have to speak up when injustice happens. No matter what. And music is one of the best ways I know to do so."

Artist Carrie Mae Weems responded to the shooting by creating a theater piece called “Grace Notes” that premiered at Spoleto Festival in 2016.

South Carolina Poet Laureate Marjorie Wentworth was driven to her pen immediately after hearing about the crime at Emanuel. She wrote “Holy City,” dedicated to the victims and first published by The Post and Courier.

Charleston Poet Laureate Marcus Amaker also wrote a poem, “Black Cloth,” about racism and intolerance, but also faith and love. So did Nikky Finney, for the Halsey Institute of Contemporary Art's "Southbound" show; it's titled "Miss Polly is Akimbo Underneath the Mother Emanuel Collection Table."

And then there are the books. Wentworth joined Herb Frazier and Bernard Powers to produce “We Are Charleston: Tragedy and Triumph at Mother Emanuel.” Post and Courier reporter Jennifer Berry Hawes wrote “Grace Will Lead Us Home: The Charleston Church Massacre and the Hard, Inspiring Journey to Forgiveness.”

And now there is a documentary film, “Emanuel,” directed by Brian Ivie.

It is a safe bet that much more will follow.

Forgiveness is theme of 'Emanuel' documentary, to be screened in Charleston

'Not a singular incident'

“It shows you a level of impact the event still has,” said the Rev. Kylon Middleton, pastor of Mt. Zion AME Church and a close friend of Emanuel’s pastor, The Rev. Clementa Pinckney, who was among the nine killed. “With some things, the farther you move away from them, the more they fade, but other events last. This remains something that’s fascinating, to the extent that people are trying to find a way to understand how these people can move from a very traumatic moment to lives that are filled with a pursuit for justice, activism that is productive and not destructive, and a hope that somehow the very system that created this evil person can also restore (our faith in it).”

Middleton said these manifestations of the tragedy in popular culture serve an important purpose.

And they force us to confront the horror of it, Middleton added.

“At some point we have to get to the root of the evil, which is hate, and hate steeped in bigotry.”

Maybe that is the artist’s implicit plea: to get to the root of it.

Twiggs would have us do this. He has been getting to the root of it in his art for decades. His “Crossings” series, and “Targeted Man” series, and “Commemoration” series all address the perversions of history and the racism embedded in American culture. “Requiem for Mother Emanuel,” then, was but a continuation of his work.

“Mother Emanuel is not just a singular incident,” he said. “South Carolina is the place where the Civil War began. It was first state to secede from the Union. It has had a raucous past.”

What’s more, the Legislature rarely has passed laws that explicitly benefit black people unless they were forced to do so, Twiggs said. Consider the Confederate Flag debate. Look at the state of public education.

But poor-quality schools don’t often inspire songs and paintings. Emanuel is something else, Twiggs said, something hideous on its face, but also symbolic of generations of cruelty.