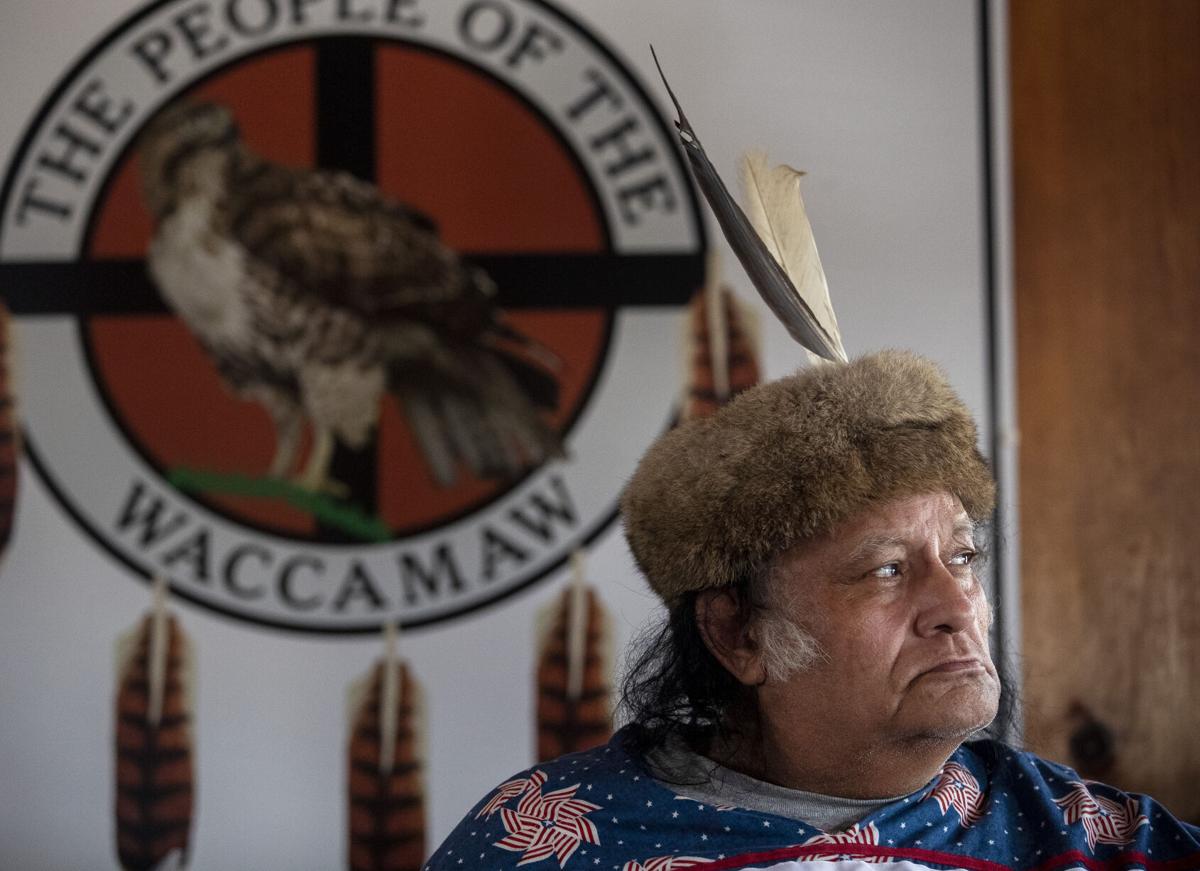 Chief Harold “Buster” Hatcher of the Waccamaw Indian People, is pictured Dec. 19, 2020, in Aynor. He has spent 30 years trying to gain official federal recognition of his tribe. File/Grace Beahm Alford/Staff 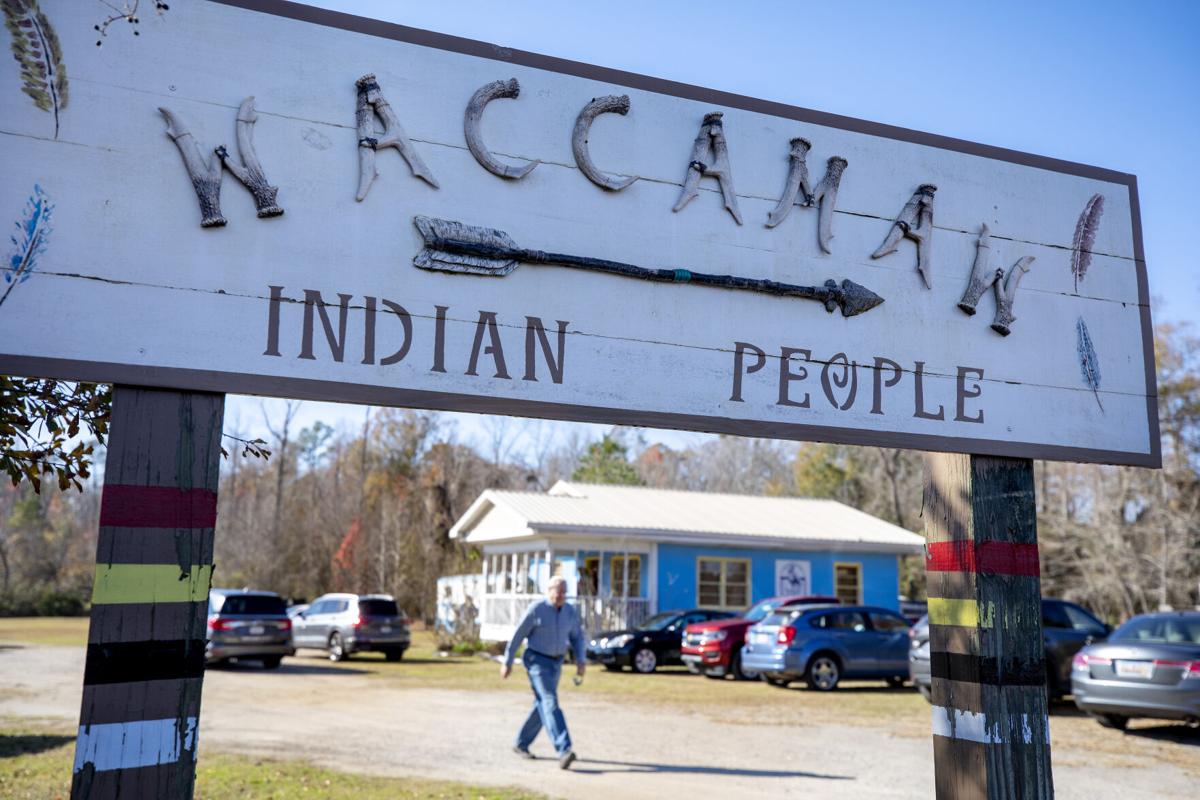 The Waccamaw Indian People have been working for years to gather documentation to support a petition for federal acknowledgment. Recently, U.S. Rep. Tom Rice submitted a bill in the House of Representatives that would grant federal recognition through the legislative process. File/Grace Beahm Alford/Staff 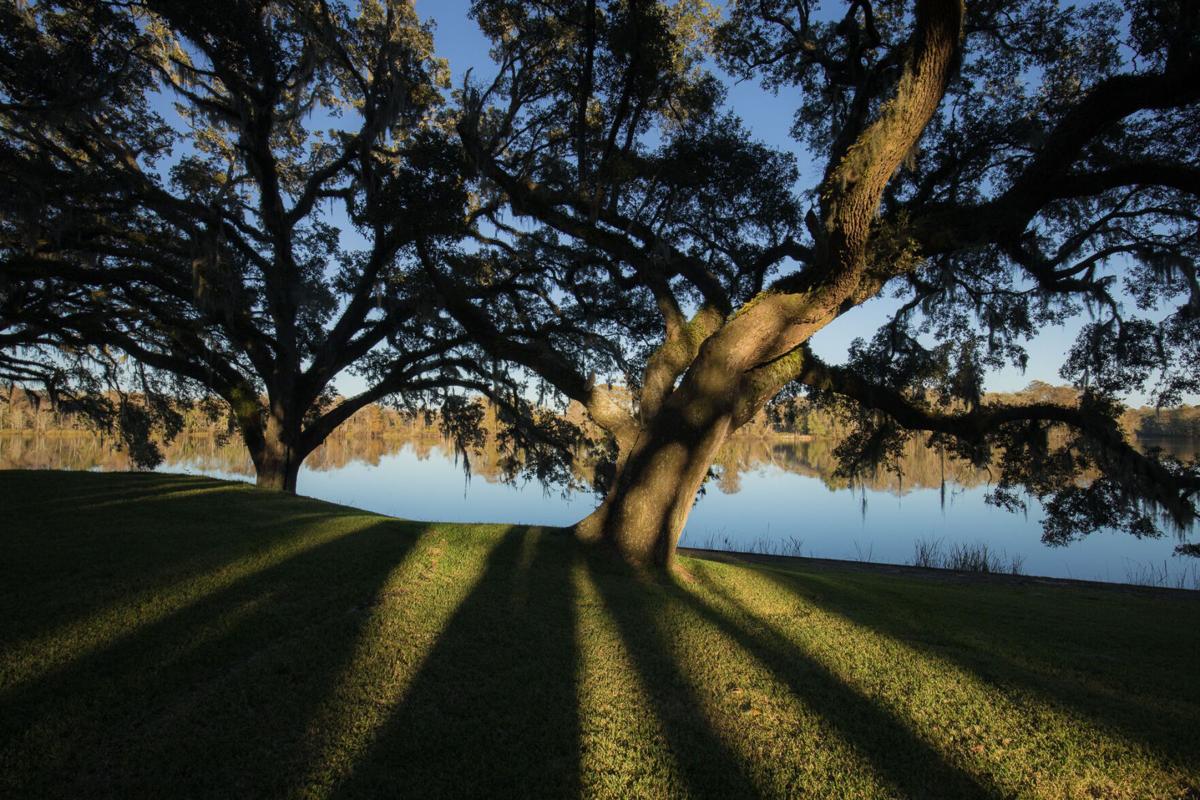 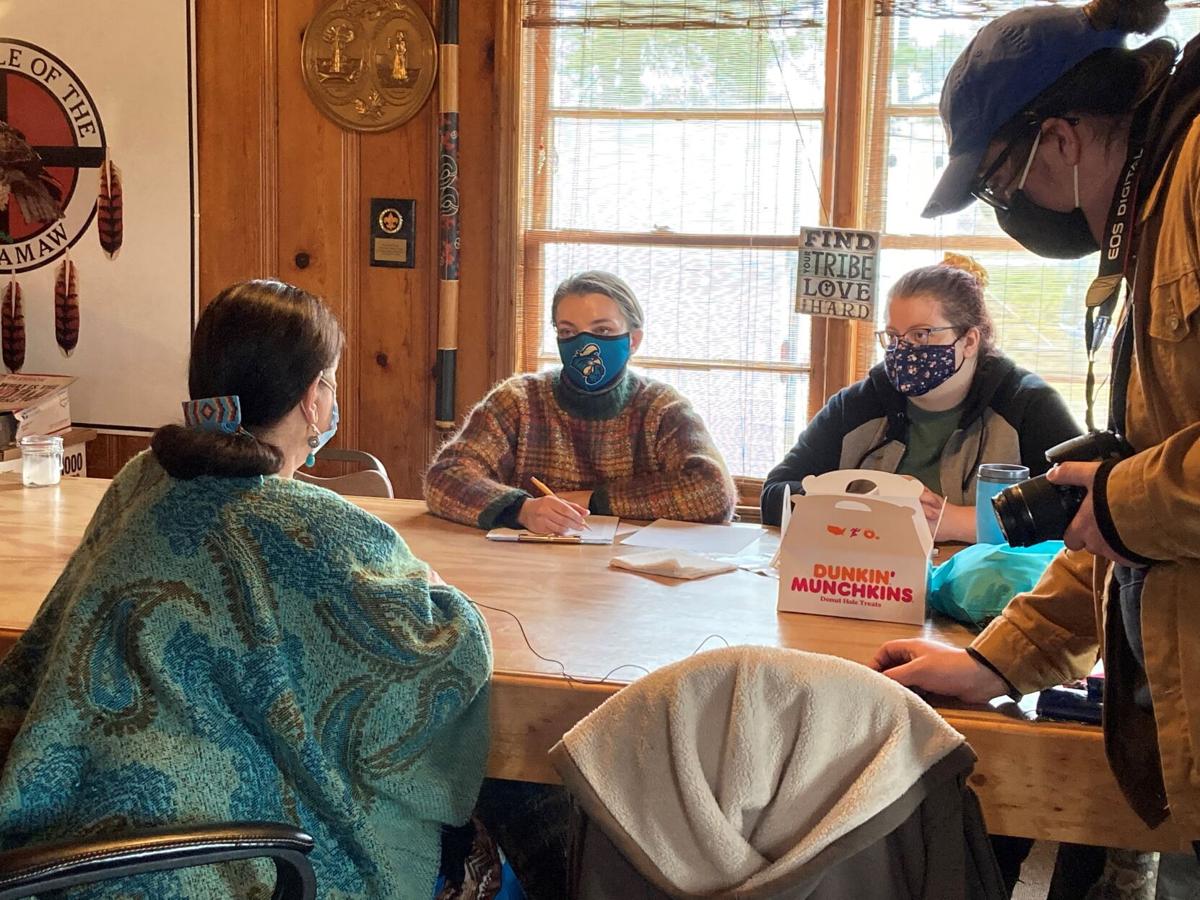 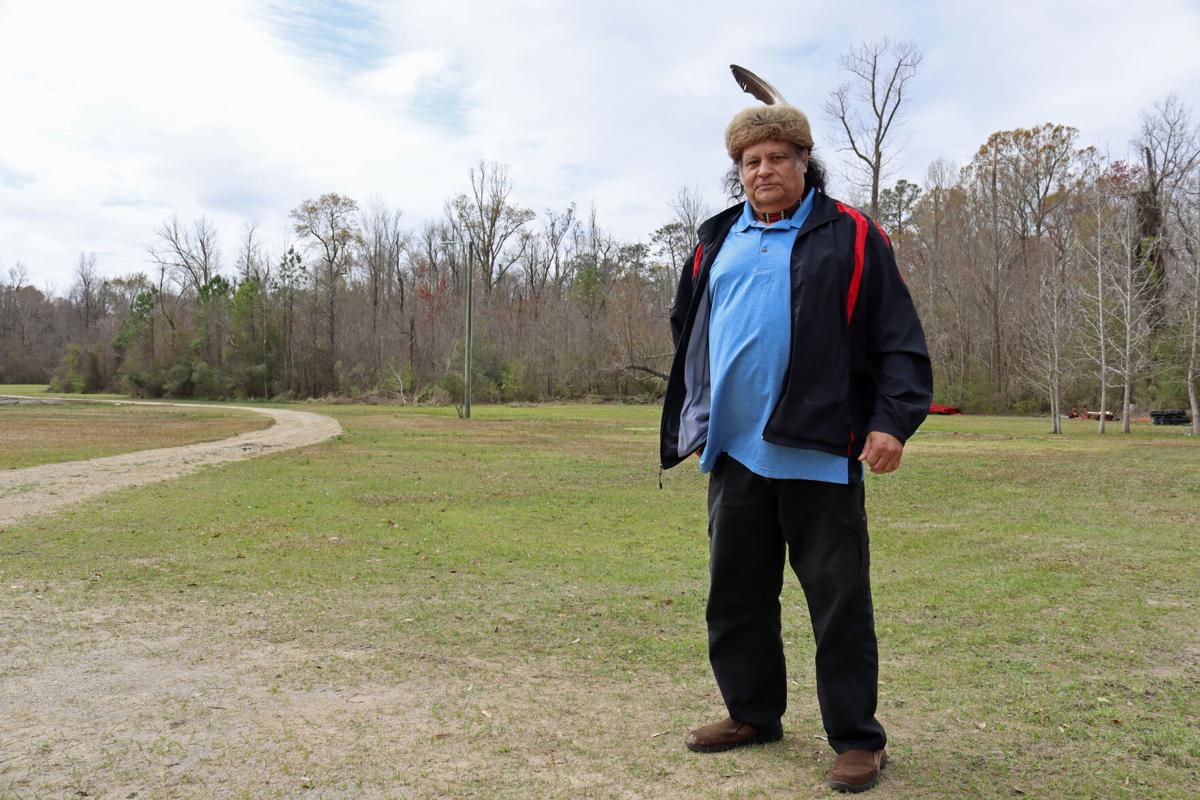 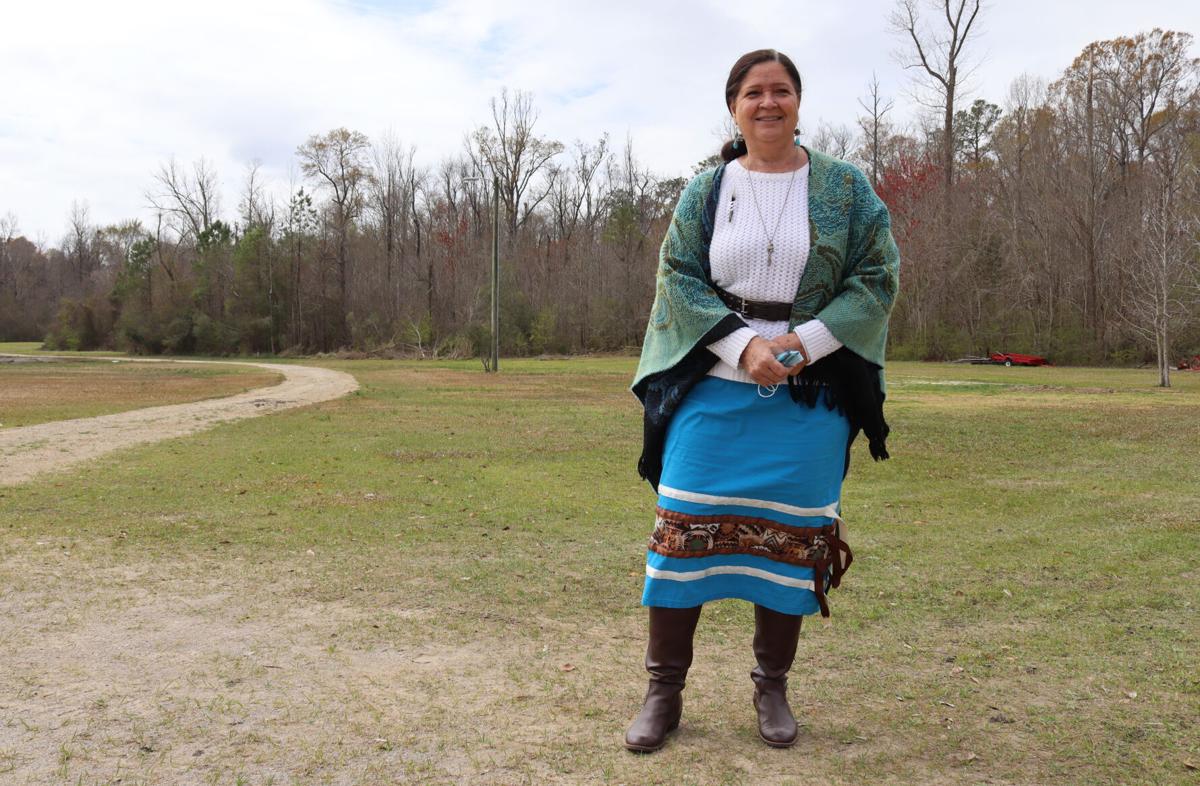 The Waccamaw, who have sought federal recognition for 30 years, have sponsored a task force designed to influence the way public school students learn about Native Americans. By improving public awareness, the tribe hopes to win support for its cause.

Sara Rich, a professor of art history and archaeology at Coastal Carolina University, is among those volunteering to tackle items on a Waccamaw to-do list. She's helping to complement the state’s education standards with information that better represents the Waccamaw and all of South Carolina’s indigenous people.

That task force is preparing materials educators can use to tell a fuller, more equitable story. They want to make it easy — turnkey, really — so teachers already burdened with responsibilities don’t need to do the research themselves, Rich said.

The effort to revise school curricula coincides with a separate legislative initiative sponsored by U.S. Rep. Tom Rice, R-Myrtle Beach, to grant federal recognition to the Waccamaw and Pee Dee tribes. Two bills were introduced in the House by Rice on March 16.

Meanwhile, Coastal Carolina students under the supervision of Carolyn Dillian and Katie Stringer Clary are organizing a special exhibition about the Waccamaw to open April 27 at the Horry County Museum in Conway.

It’s all part of what Native leaders say is a long-overdue reckoning with the role indigenous people have played in the Carolina territories over the course of nearly four centuries, plus the discrimination and marginalization they have experienced and the cultural richness they celebrate.

'Not on my watch'

“First, I researched how indigenous people are being represented in textbooks,” she said. “It was pretty deplorable.”

Native perspectives are almost completely overlooked, Rich said. The textbooks mention the Trail of Tears, a result of President Andrew Jackson's 1830 Indian Removal Act, and that’s about it. They mention the Cherokee and Catawba tribes, both federally recognized, but none of the many other Native American communities in South Carolina.

The general impression among students (and many adults) is that Native Americans were relocated to reservations out West and that’s that, Rich said.

The state’s social studies education standards were updated in 2019 to be more inclusive, said Chris Judge, an archaeology professor at the University of South Carolina Lancaster who was part of a review team.

“The subcommittee I served on examined the K-12 standards considering Native American perspectives,” he wrote in an email. “Instead of using the 2011 version’s tribal names — Catawba, Cherokee and Yemassee (which only names three of the many tribes that called South Carolina home, the latter of which only occupied South Carolina for 30 years), more inclusive terms such as 'indigenous' and 'marginalized peoples' were used in the 2019 version.”

This made it easier to recognize other minority groups, he wrote.

Each year, educators can provide new information or recommendations. Already, the S.C. Department of Education discourages teachers from having their students dress up as Pilgrims and Indians at Thanksgiving, according to Judge. The agency already has incorporated recommendations of the special task force that was formed late last year, and which benefits from the participation of Anne Pressley, the Education Department’s director of standards and learning.

“Now that we have representation from SCDE on the task force, this should prove to make the next round of standards even better when they are revised sometime around 2026,” Judge wrote.

Cheryl Sievers Cail, vice chief of the Waccamaw, said she will no longer tolerate what she considers the deliberate erasure of her cultural heritage and the contributions made by her people.

“It’s not going to happen on my watch,” she said.

Cail has been consulting the documentary record, talking with historians and researching her own genealogy. She includes among her ancestors John Dimery, a “free person of color” who in 1813 purchased land that quickly became known as the Dimery Settlement — today’s Waccamaw tribal land.

The federal census did not categorize non-reservation Native people as “Indian” until 1870. They were often labeled “mulatto” or “black” or “free persons of color,” emphasizing race and helping to shape views of Native people as “other,” Cail said.

It’s time to recognize Native communities for the help they provided settlers, showing them how to navigate the rivers and creeks, plant successful crops, avoid poisonous plants, and hunt game, she said. Native people participated in the fur trade and other economic activities that strengthened colonial settlements and enabled cities such as Charleston to emerge as important urban centers.

But Native Americans had no concept of land ownership, nor the bureaucratic means to secure legal rights to property. They were susceptible to diseases carried by White settlers, and corrupted by alcohol, Cail said. Some assimilated into African American or White communities, losing touch with their cultural traditions.

Browning Michael Neddeau, a professor of American Indian studies and elementary education at California State University in Chico, sits on the Waccamaw’s education task force and shares with colleagues in South Carolina his experiences out West.

Neddeau is a member of the federally recognized Citizen Potawatomi Nation. He’s involved in two tracks of reform, one to bolster ethnic studies at the college level and another to introduce it to K-12 students.

Traditionally, he said, educators have determined curricula without much input from indigenous communities, but that’s changing in California and in South Carolina where Native people now have a seat at the table.

“The Waccamaw people are involved, and it’s at the very beginning,” he said. “It’s a good thing. Part of telling stories is that we have tellers and listeners. It’s interactive. We have to have both.”

A big challenge is to acknowledge the histories and contributions of tribes that are not federally recognized, Neddeau said.

“As Native people, we are citizens of our tribe, and of the U.S.,” regardless of federal status, he said. Native people don’t consider members of unrecognized tribes “less Indian,” Neddeau added. “But that’s something the federal government has done, going back to bloody bloody Andrew Jackson.”

Federal acknowledgement can be obtained in two ways: by petitioning the Bureau of Indian Affairs (and submitting sufficient documentation to show that the tribe has achieved a certain status), or by finding a lawmaker to sponsor legislation.

Federal recognition enables tribes to apply for government funding, but perhaps more importantly, it grants tribes a certain political sovereignty, allowing them to negotiate on a government-to-government basis.

This autonomy comes with new rights, such as greater freedom of religious expression, the ability to reclaim tribal human remains and objects, and the chance to determine how those objects are treated.

The Waccamaw don’t have those rights. But Rice’s bill could change that.

“I was proud to introduce in Congress H.R. 1942, The Waccamaw Indian Acknowledgement Act, which would give well-deserved federal recognition to the Waccamaw Indian people,” Rice said in a statement. “Congresswoman (Nancy) Mace joined me in this effort. I’ve had many conversations over the years with Chiefs (Harold "Buster") Hatcher and (Pee Dee Indian Tribe Chief Pete) Parr about the importance of this status. I stand ready to be a partner to both the Waccamaw and Pee Dee tribes in their decades-long endeavors to gain recognition.”

Rich said students who are not members of a federally recognized tribe sometimes fail to win the acknowledgement they deserve.

“There have been multiple instances when Waccamaw kids in the classroom say, ‘I am Indian,’ but the tribe is not in the textbook, so there’s a lack of awareness. It’s Catawba and Cherokee and that’s it.”

That's one reason why she and the rest of the team are creating instructional resources that inform the standards.

“But if we provide materials in a passive way, they are unlikely to be put to use,” she said. “So we’re also providing training.” And they’re seeking strategic partners, such as SCETV, to help distribute the information.

Later this year, the educational materials will be available to all online, and a social media campaign will raise awareness, she said.

At the Horry County Museum in Conway, Dillian, her colleague Clary, and their Coastal Carolina students are preparing the Waccamaw exhibition, which opens April 27 and will remain on view for about a year.

It’s the result of years of research, interviews and coordination with Hatcher, Cail and other members of the tribe, who have made guest appearances in the classroom, and who have hosted students on Waccamaw tribal grounds.

“Students often get very fired up,” Dillian said. They want to know what they can do to help. Few had learned anything previously about the Waccamaw or other state tribes.

The exhibit is meant to raise awareness, but also to bolster the Waccamaw’s petition for federal recognition, Dillian said.

“We wanted the message to be: These are our neighbors, colleagues, coworkers, friends — modern people who happen to retain cultural traditions that people don’t know about. We didn’t want to ‘other’ them,” she said.

With help from the tribe, students collected a variety of artifacts, personal belongings and narratives to include in the museum show.

“The timing of this was just perfect,” Dillian noted, referring to Rice’s bill on behalf of the Waccamaw. “This is great way to educate the community about the Waccamaw Indian People and heighten their visibility. ... Part of what you need for federal recognition is to have that kind of visibility.”

The students have invited members of the House of Representatives to see the exhibit, Dillian said.

“So when the bill crosses their desks, they can say ‘I’ve heard of this.’”

Cail said recognition without empowerment is little more than a gesture.

Native people have coped with a long history of discrimination and marginalization, and too often they have been stymied when asserting their cultural identities.

They are behind economically, endure problematic health disparities, and lack sufficient agency, she said. Yet their history is worthy of pride and celebration.

“You can’t understand today unless you look back,” Cail said. “The truth is kind of ugly.”

Miniature portraits of Richard Lushington, a captain in the American Revolution who commanded a volunteer militia that included many Jewish merchants from Charleston, and his wife Charity Lushington recently were located. The miniatures were donated by Savannah resident Elizabeth Adams to the Charleston Library Society. Read moreThe miniature man: Richard Lushington, his Jewish militia, and Charleston's high society

Murdaugh's interactions in the days after his wife and son were killed are snapshots of the waning days of his sway in South Carolina. Read moreAlex Murdaugh's last days of influence captured in videos, testimony at murder trial

"Debris should not be touched, moved, or removed," Horry County police tweeted late Feb. 4. "Such items are part of a federal investigation and tampering could interfere in that investigation." Read moreMyrtle Beach authorities warn of possible debris after US military shoots down Chinese balloon

Deon Jackson got good marks for his job leading Berkeley County schools. Then he was fired.

Through a FOIA request, The Post and Courier obtained former Berkeley County School District superintendent Deon Jackson's evaluations. Most of the board members, including two members who voted to fire him in November, had given him a rating of "Proficient" or higher. Read moreDeon Jackson got good marks for his job leading Berkeley County schools. Then he was fired.