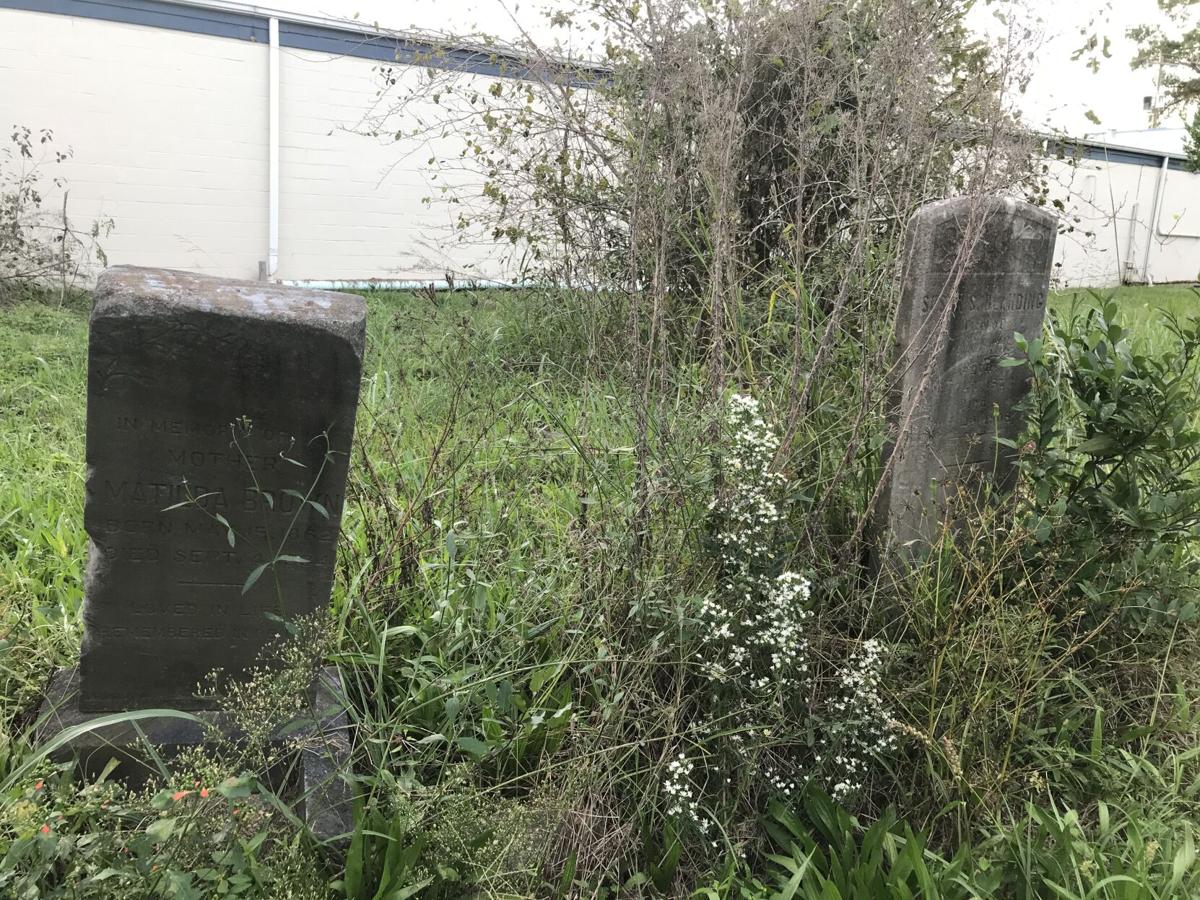 A pair of gravestones in an empty lot off Heriot Street. Few knew this was a significant Black cemetery containing hundreds of remains. Federal legislation meant to better protect Black burial grounds received a major boost this week when the Senate unanimously passed a bipartisan bill expected to benefit at-risk sites in South Carolina. Adam Parker/Staff 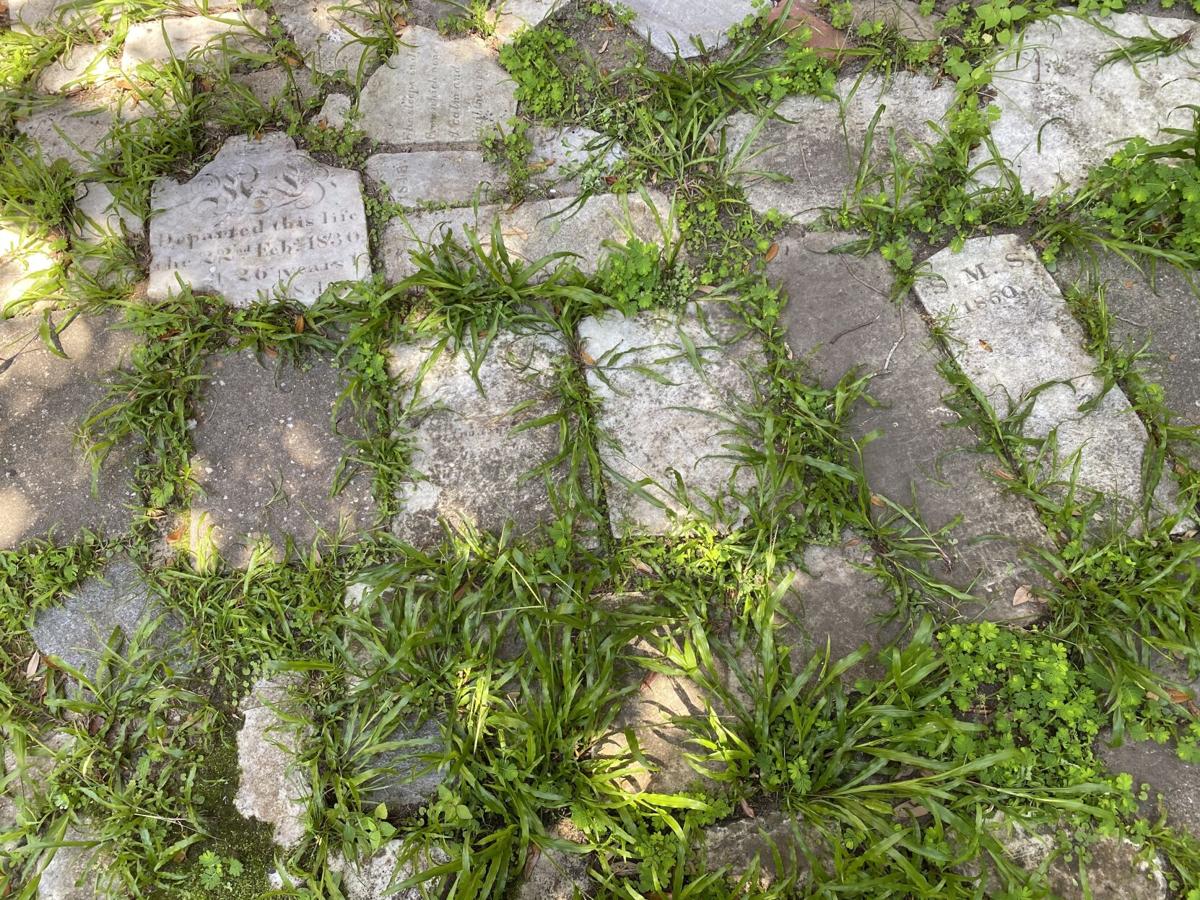 Gravestones at Trinity cemetery near the corner of Calhoun and Smith streets, have been used as pavers. The Gullah Society/Provided 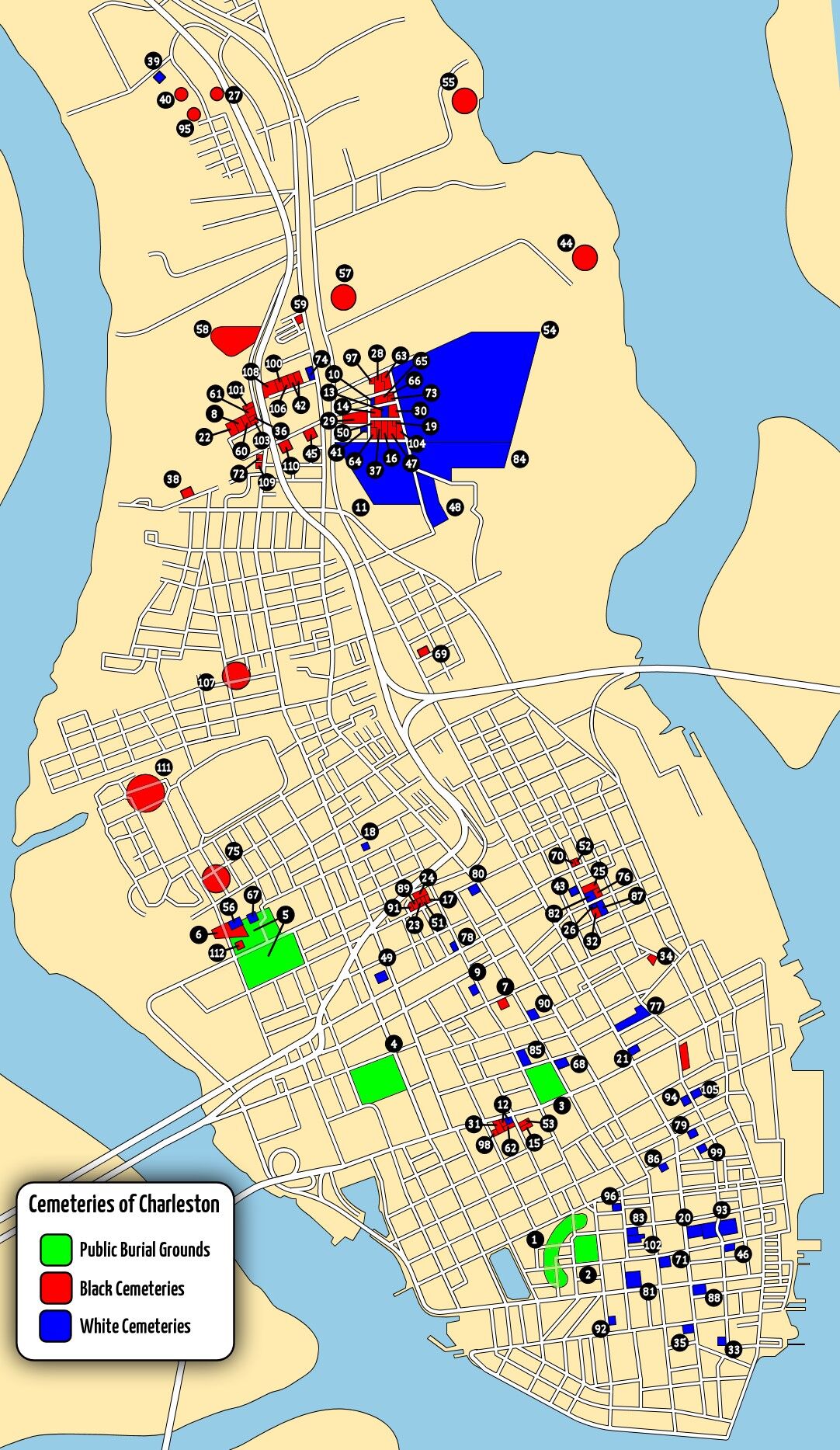 A map of Charleston's many cemeteries and burial grounds, created by Grant Mishoe of The Gullah Society. Grant Mishoe/Provided 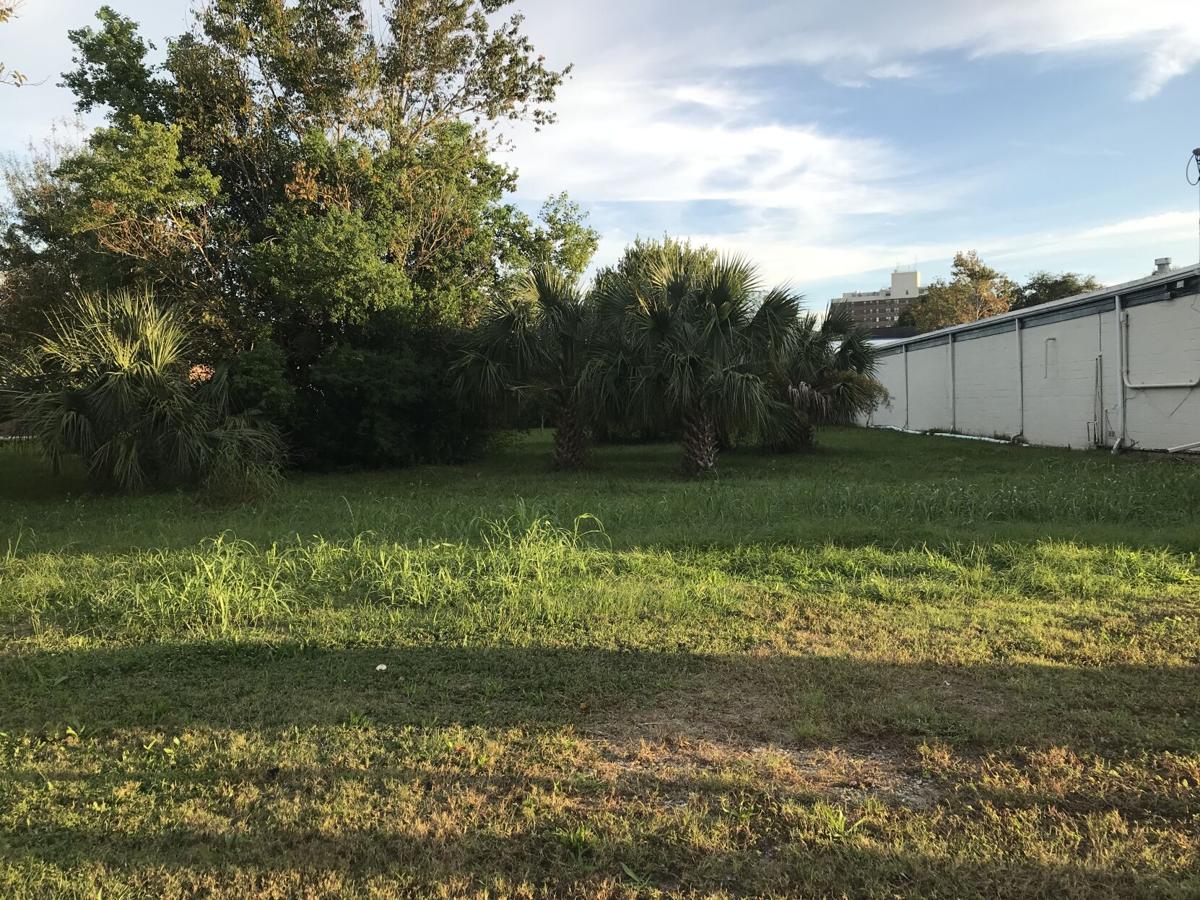 This empty lot on Heriot Street might not look like much, but buried the remains of hundreds of African Americans are buried there. Adam Parker/Staff 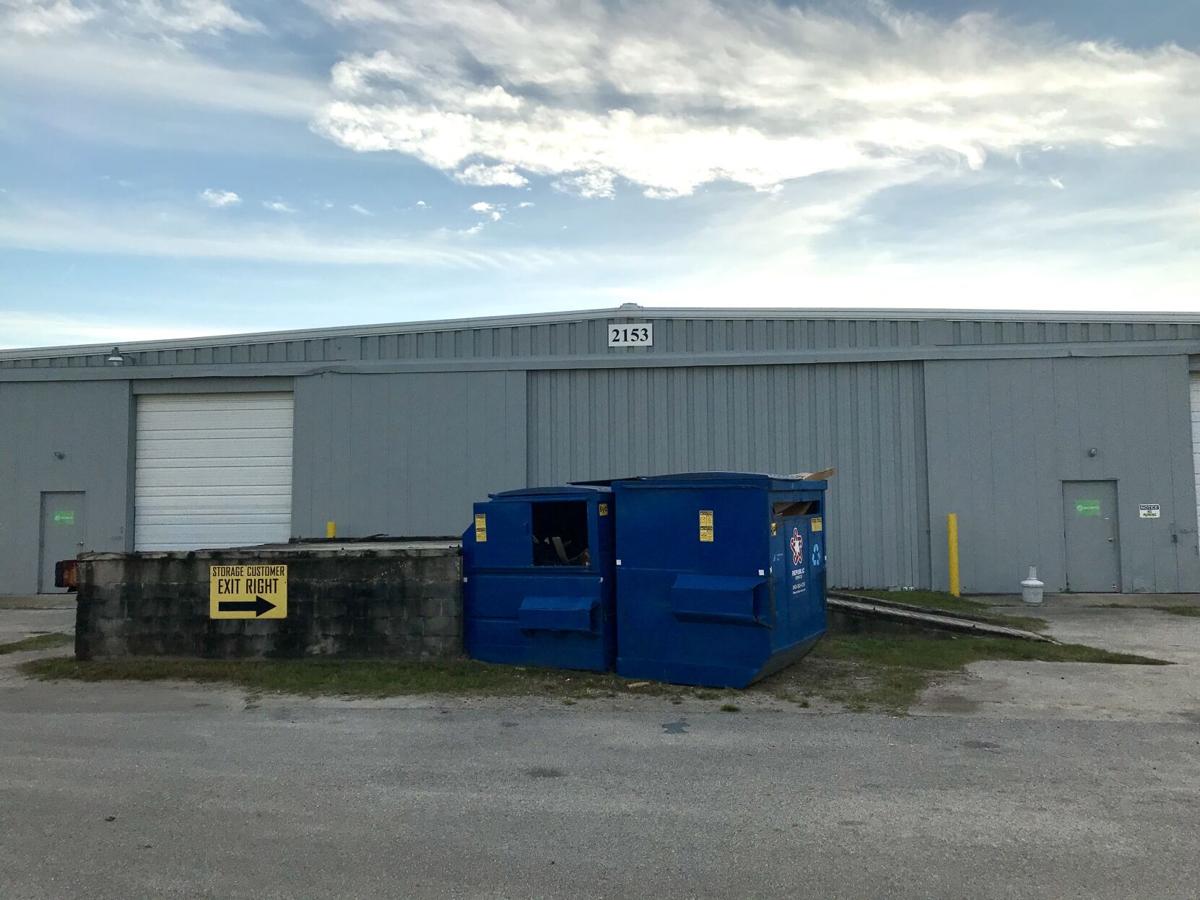 Beneath this warehouse on Heriot Street is a lost Black cemetery, according the Gullah Society, which has mapped most of the Black burial grounds on the Charleston peninsula. Adam Parker/Staff

The bill, which authorizes the Department of the Interior to conduct a comprehensive study of Black burial grounds nationwide, paves the way for Congress to establish the African American Burial Grounds Network — a project that would enable historians, archaeologists and preservationists to coordinate efforts, create a nationwide database, receive grant funding and more.

The Gullah Society was among nearly 60 organizations that submitted a letter of support to House leaders in November last year.

A House bill, introduced in February 2019 by Rep. Alma Adams, D-.N.C., details the project, which would be administered by the National Park Service. It is modeled after two similar projects NPS manages: “We Shall Overcome: Historic Places of the Civil Rights Movement” and “The National Underground Railroad Network to Freedom Program.”

Because of its history, the effort could have a disproportionately helpful impact in the Charleston region, which has layers and layers of buried human stories that local preservationists are hoping to protect by encouraging city officials to pass an archaeological ordinance.

First discussed formally in 2018, the idea gained support from Charleston Mayor John Tecklenburg and others but soon fell victim to budget restraints, said Winslow Hastie, executive director of the Historic Charleston Foundation and a party to those discussions. Given the recent construction boom, it’s more important than ever to adopt measures to protect the city’s historic legacy, he said.

“There are untold amounts of archaeological resources being destroyed, and once it’s done it’s done; you’re never going to recover them,” he said.

The purpose of the congressional consent is to empower the National Park Service to coordinate and facilitate efforts “to identify, interpret, preserve, and record unmarked, previously abandoned, underserved, and other African-American burial grounds,” the House bill states.

“We know that for too long in too many parts of our country, Black families were blocked from burying their loved ones in White cemeteries,” Sherrod said on the Senate floor. “These men and women were freed slaves, civil rights champions, veterans, mothers, fathers, workers in communities. We need to act now before these sites are lost to the ravages of time or development.”

Ade Ofunniyin, founder of The Gullah Society, dies at 67

Once the study is funded, the Department of the Interior would have three years to complete it, according to the bill.

If the burial grounds network materializes, the initiative could provide technical and financial assistance, coordinate and help train interested parties, support the research and documentation of historic sites, assist with preservation and education efforts, and help engage descendant communities.

It also could create an official symbol used to identify burial grounds that are part of the network.

Joanna Gilmore, director of research and interpretation for the Gullah Society, said the potential to receive grant money could help propel the organization into a new phase of operation. To date, its work has been done on a volunteer basis, she said.

The new network project would enable the Gullah Society to create a general database, accessible by the public, that provides information on South Carolina’s many burial grounds — those known and still to be discovered and documented.

The national project also could help the Gullah Society generate educational materials for schools and train local communities how to conserve and maintain these sites, she said.

Hastie said a municipal archaeological ordinance likely would prompt the city to hire a staff researcher (or use a third-party contractor) and add no more than $100,000 to the annual budget.

It would ensure that any proposed new development, especially large-scale development, included formal archaeological surveys, and would likely lead to the creation of a history map that flags sensitive areas of the city, Hastie added.

Initially, the effort would focus on the peninsula, though it should extend to James Island, West Ashley and elsewhere, he said. Many parts of the city contain old earthworks, buried Revolutionary and Civil War installations, lost cemeteries and other sites of historical importance.

Other cities have passed such ordinances. St. Augustine in Florida, for example, enacted its Archaeology Preservation Ordinance in 1987.

“St. Augustine's archaeological heritage is unparalleled in the quantity and diversity of remains buried beneath its buildings, streets, and backyards,” the city declares on its website. “These deposits not only reflect the City's European origins since 1565, but also include a rich and varied Native American heritage that has been in existence for thousands of years.”

The Charleston area, too, contains Native American relics, such as shell middens and buried encampments, as well as a variety of Gullah-Geechee remnants. On the peninsula alone, Black burial grounds number around 100. Many of them already are lost.

The new federal project surely would help, Gilmore and Hastie said. A city ordinance formalizing archaeological research and preservation would ensure that much more than burial grounds is identified and secured.

The coronavirus pandemic and its economic impacts have forced the city to cut expenses and postpone new initiatives, though the ordinance still is on the table, officials said.

“I think it’s important,” Hastie said, referring to other cities that devote public resources to archaeological projects, and have done so for decades. “Here we are, touting our preservation bona fides, yet we don’t do that.”