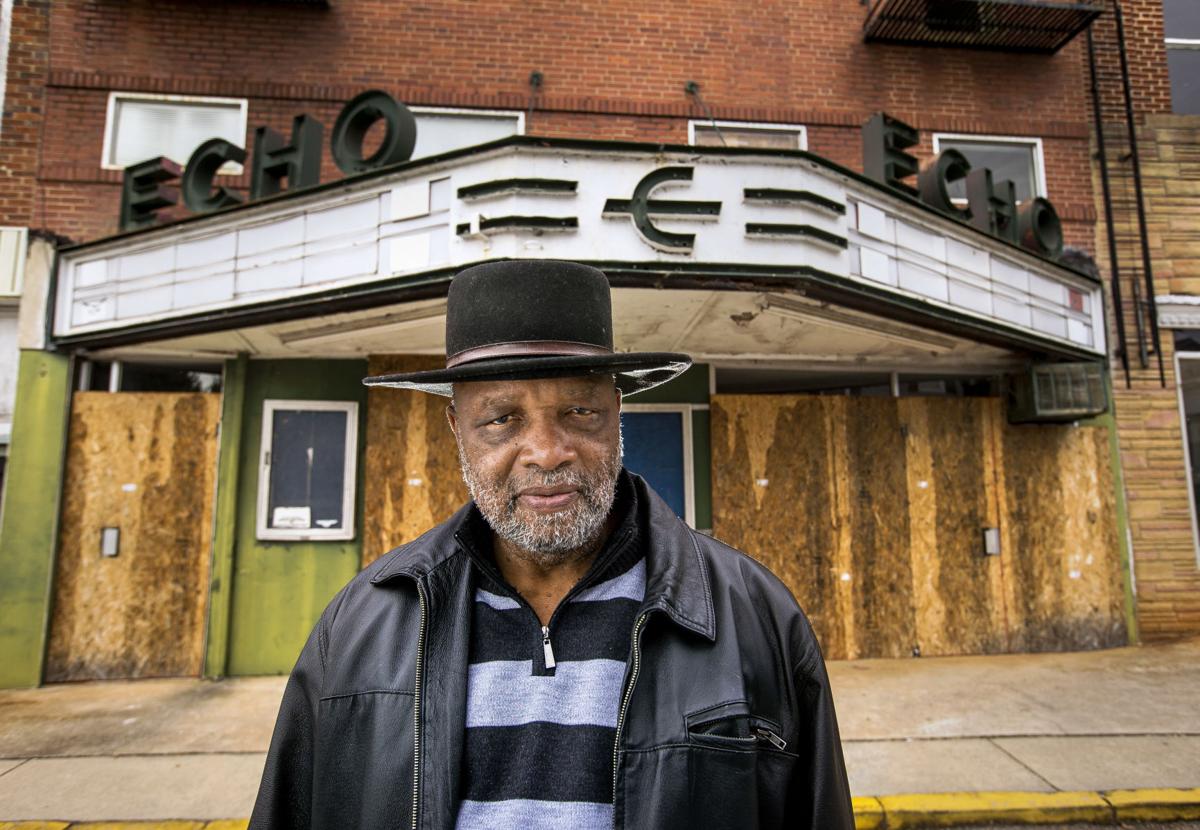 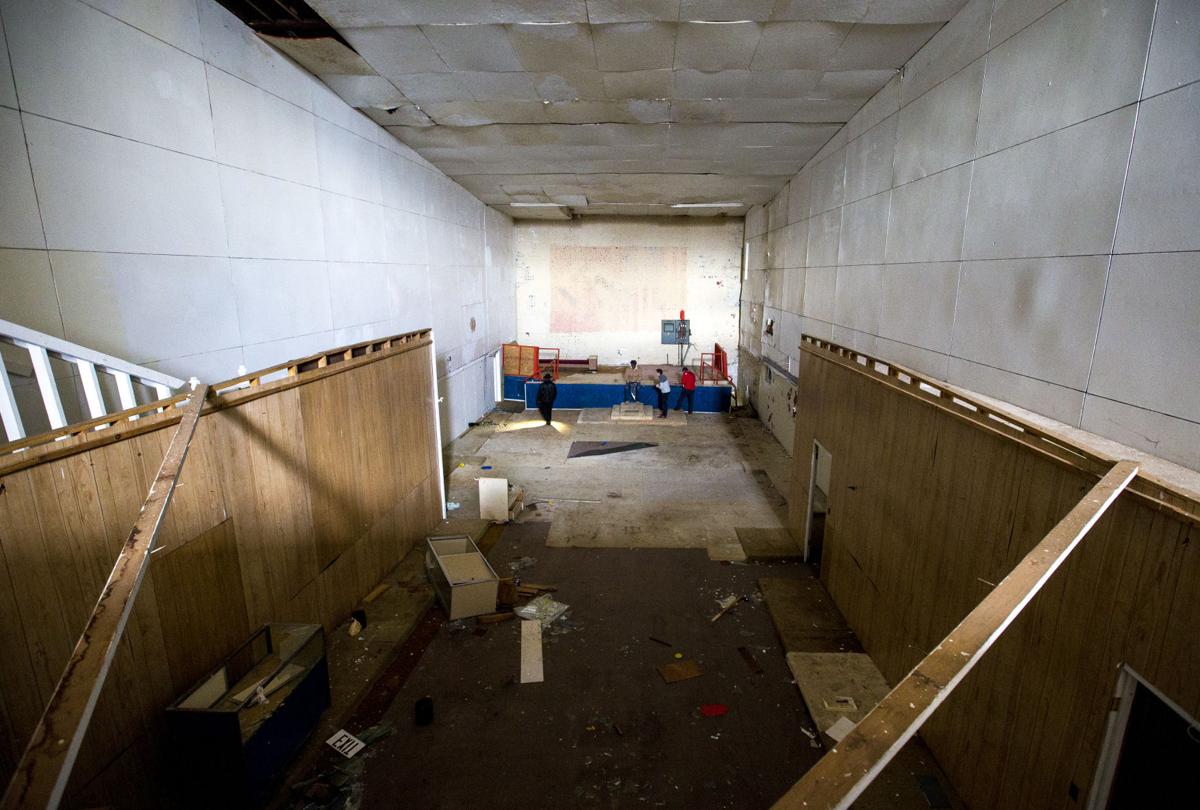 A view of the screening room inside of the former Echo Theater. Out front, the Redneck Shop once sold KKK and Nazi items. In this room, in the late 1990s and 2000s, the Klan and American Nazi Party held their meetings. A faded swastika can be seen on the back wall. Andrew J. Whitaker/Staff 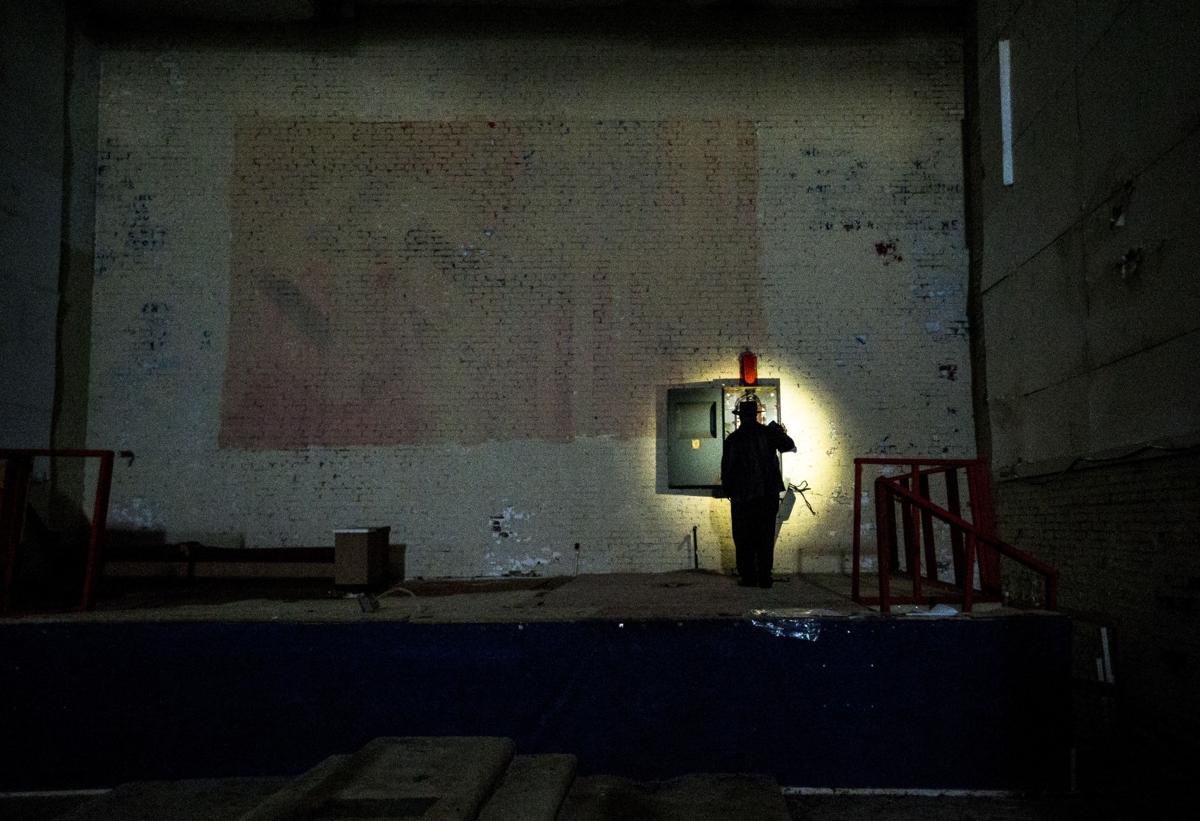 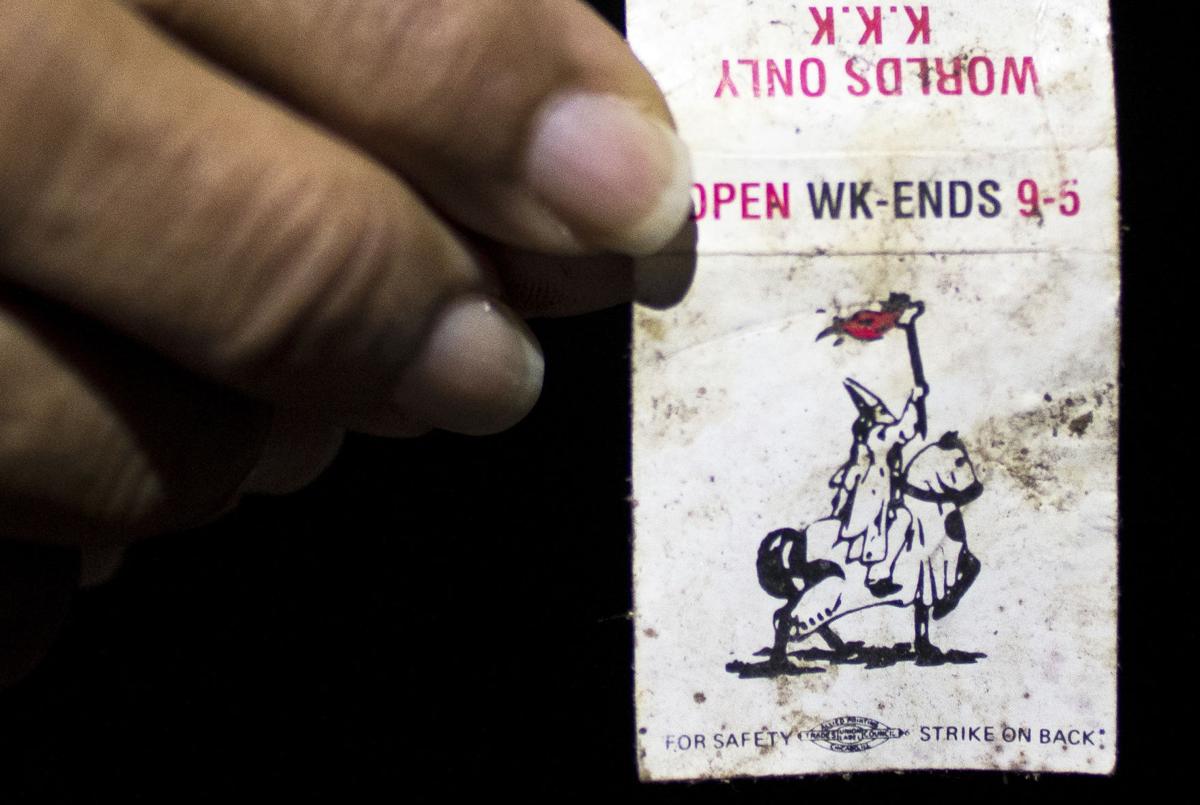 The Rev. David Kennedy holds a KKK matchbook he found inside the former Echo Theater on Thursday, Jan. 23, 2020, in Laurens. Andrew J. Whitaker/Staff 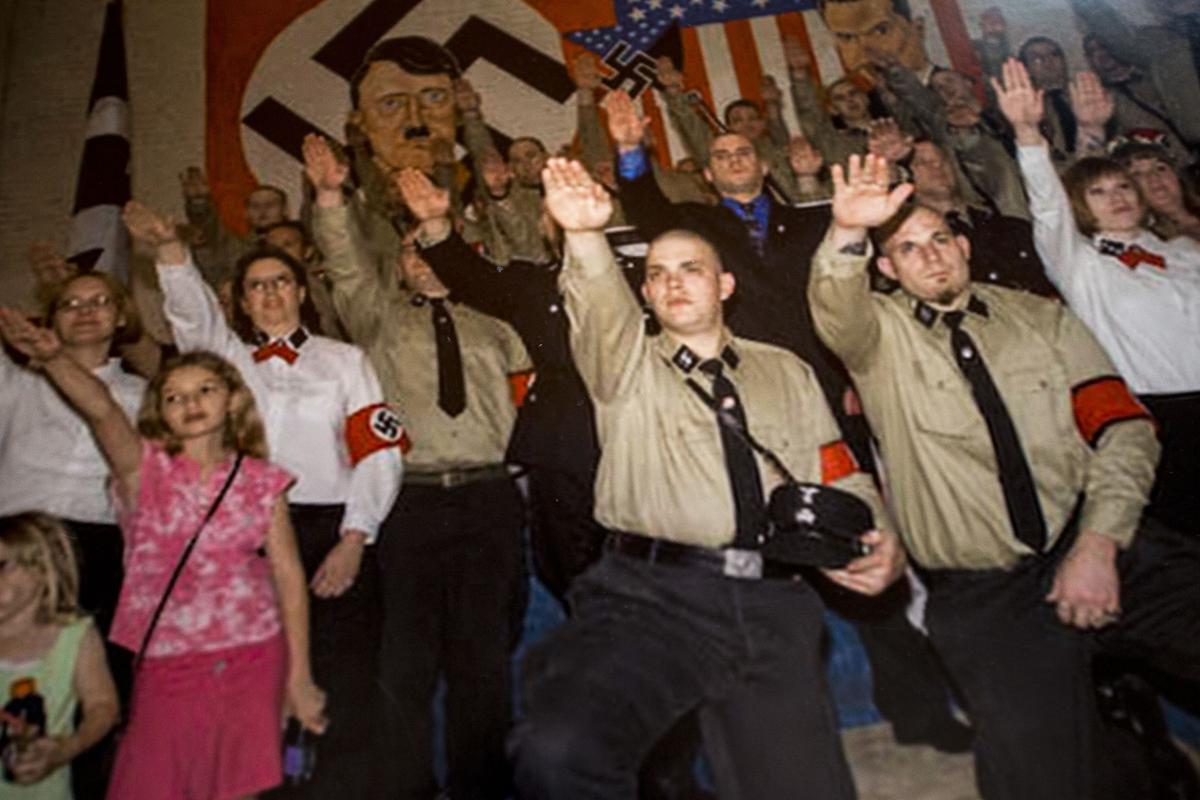 The Rev. David Kennedy keeps a few photos at his church to remind visitors about the history of the Echo Theater in downtown Laurens. This image shows a meeting of neo-Nazis inside the old theater. Provided 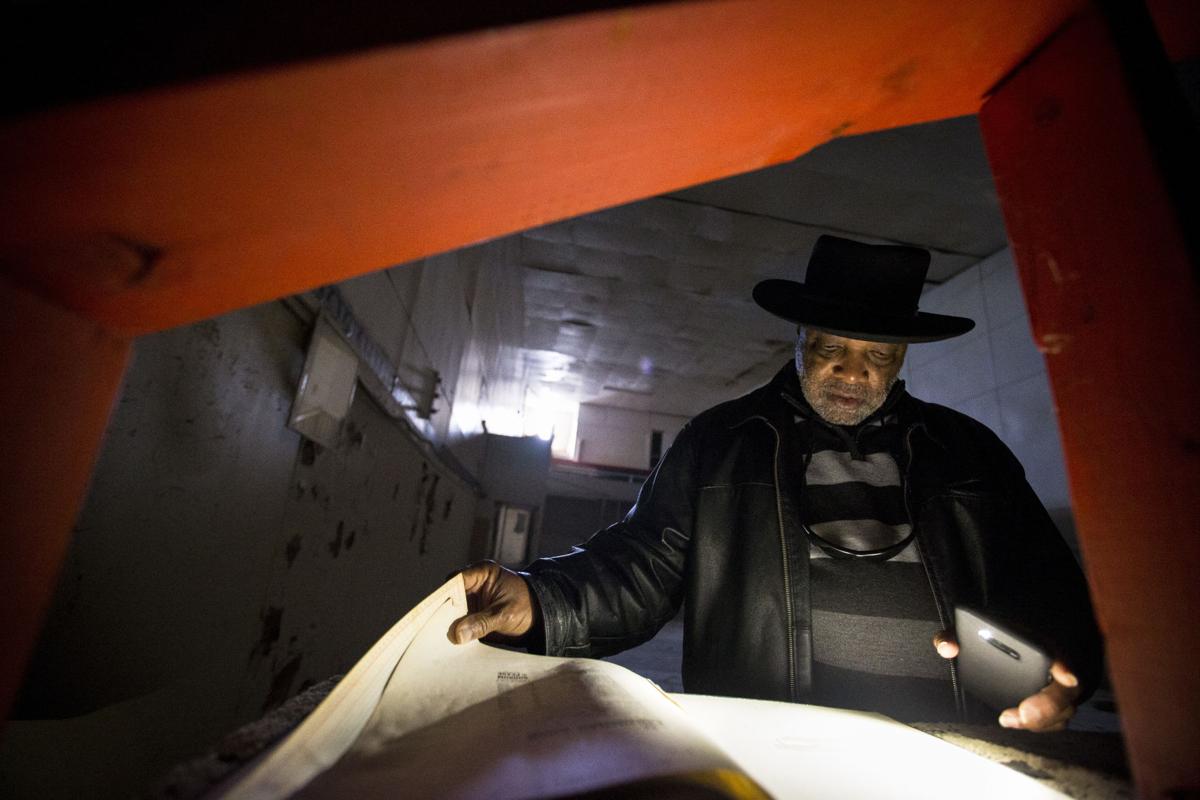 The Rev. David Kennedy uses his phone light to look through old documents and photographs left inside the former Echo Theater on Thursday, Jan. 23, 2020, in Laurens. Andrew J. Whitaker/Staff 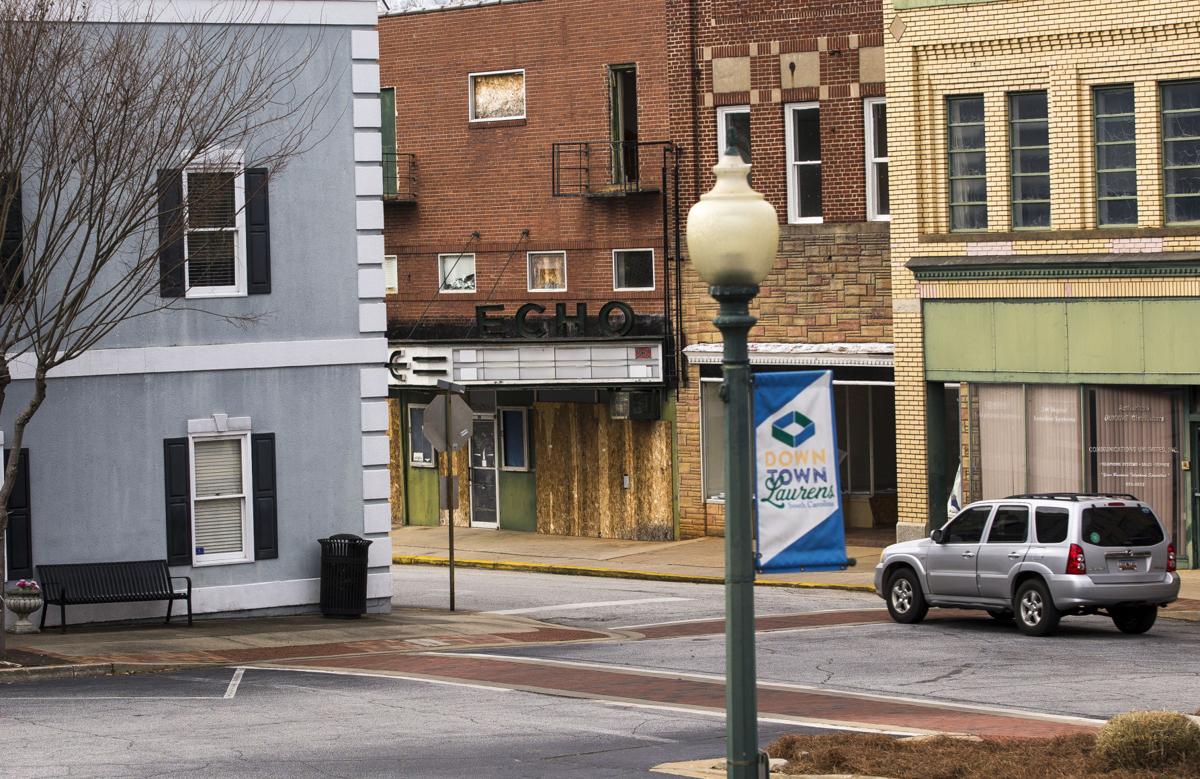 The Echo Theater, seen here on Thursday, Jan. 23, 2020, is located in the historic district of Laurens. Andrew J. Whitaker/Staff 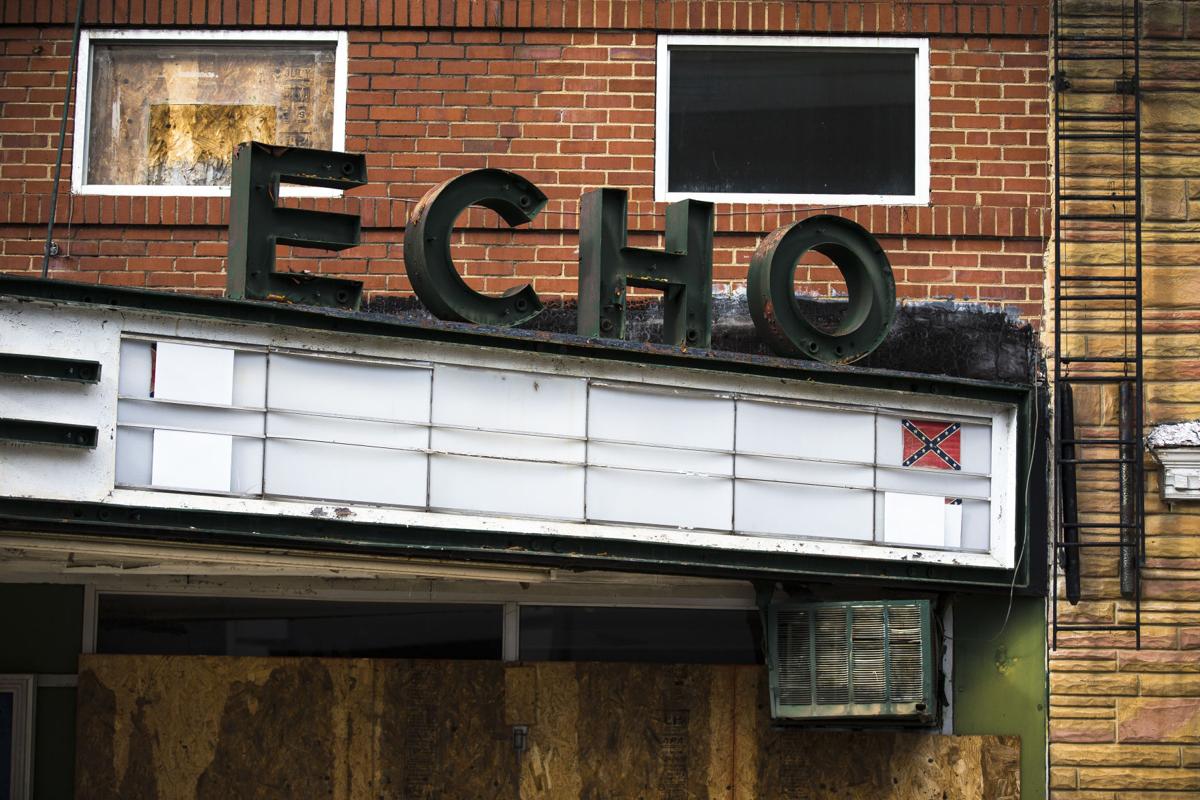 A confederate flag emblem remains on the marquee of the Echo Theater in Laurens. Andrew J. Whitaker/Staff 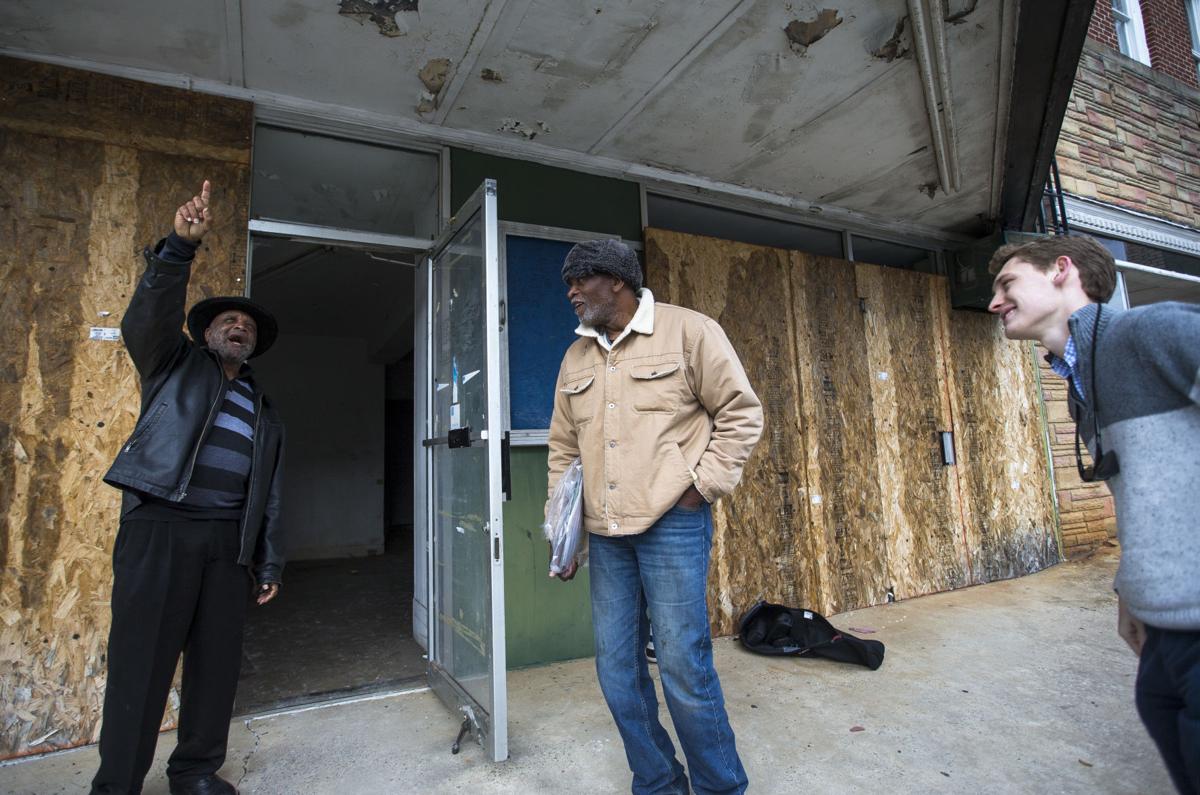 The Rev. David Kennedy (from left), Russel Smith and Regan Freeman outside the former Echo Theater in Laurens, where the notorious Redneck Shop once was located. The rundown building has been closed since 2012. An effort now is underway to renovate it. Andrew J. Whitaker/Staff 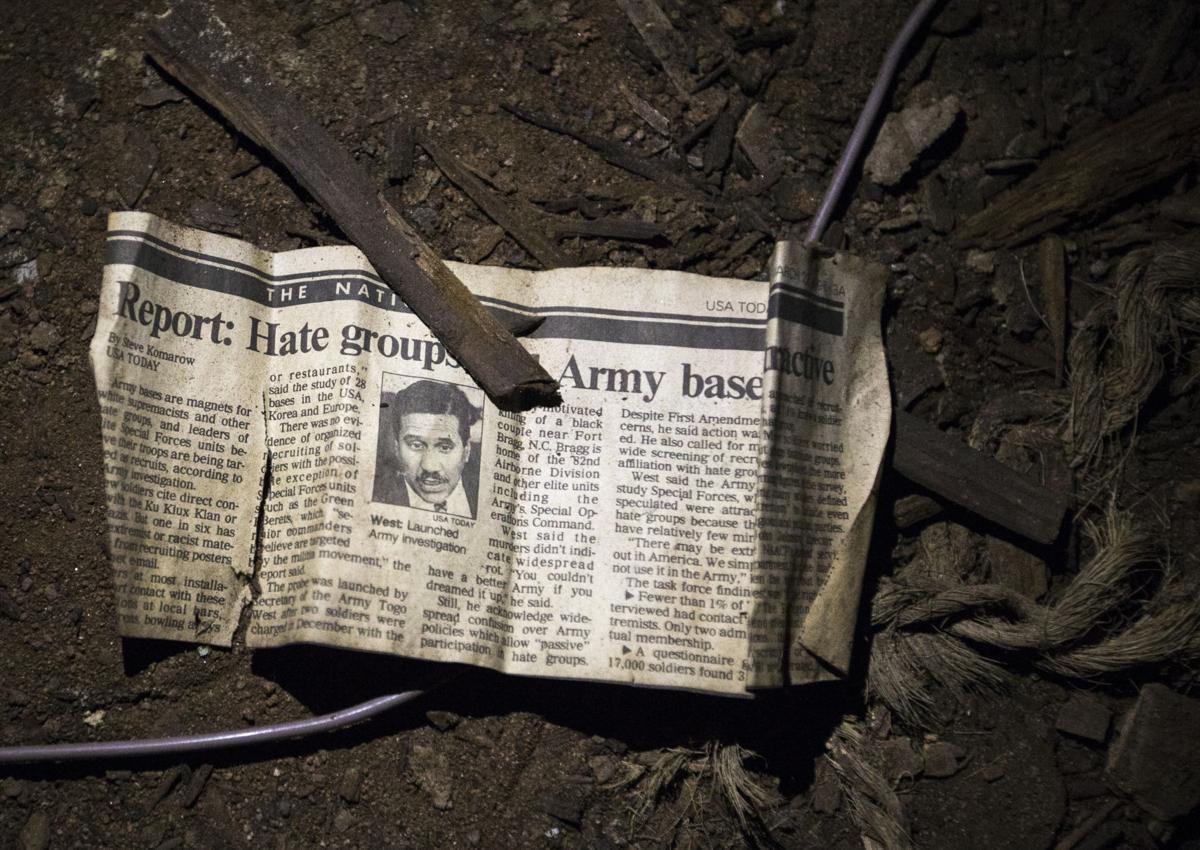 An old newspaper clipping about hate groups found in the basement of the Echo Theater building on Thursday, Jan. 23, 2020. The building in Laurens once housed the Redneck Shop and museum. Andrew J. Whitaker/Staff 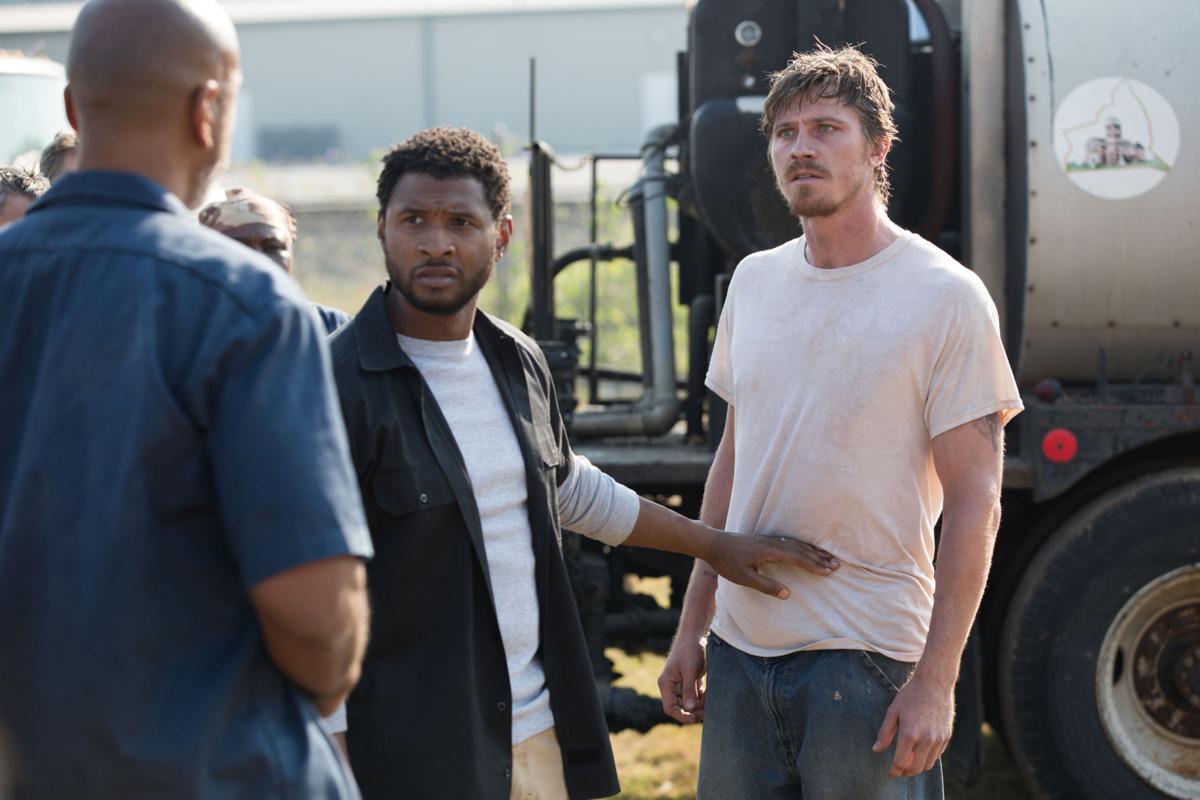 LAURENS — It’s such an unlikely tale, one that reveals the deep racial fault lines of a small Upstate town and reactivates fears of the violence and hate endured by older African Americans in this place.

It's a remarkable journey that conveys the power of faith and reconciliation.

This strange story about the Klansman and the black preacher — still unfolding today — has angered many in Laurens and has thrilled them, too.

It's about how love vanquished hate and how a troubled young man found redemption, a story that achieves the status of myth. Michael Burden’s journey is the stuff movies are made of, and it caught the imagination of a filmmaker.

The feature film “Burden” will have a limited national release Feb. 28, and it will be part of the Charleston Film Festival at the Terrace Theater, screened on March 6.

The Echo Theater in downtown Laurens, where John Howard ran his Redneck Shop museum and meeting place for white supremacists, could soon become a community center focused on racial healing. The property is at the center of the story about Michael Burden and his transformation.

The deed to the building first was bequeathed to Burden by Howard, then transferred to the Rev. David Kennedy and his New Beginning Missionary Baptist Church. For years, the black church owned the Redneck Shop where Howard sold Nazi, Confederate and Klan paraphernalia, and where the American Nazi Party held meetings in the old theater space behind the store.

Today, the Echo Theater, which sits on Laurens’ main square, is in terrific disrepair. Scattered throughout the property — in the lobby, in the main hall, in the basement — are reminders of its recent racist activities: photographs of Nazi Party leader and presidential candidate John T. Bowles and his family, an empty matchbook used to solicit new Klan members, a collection jar for the American Nazi Party, a couple of images of the Confederate flag and a faded swastika still visible on the wall behind the stage.

A nonprofit, the Echo Project, was just established so Kennedy and his team could raise money to renovate the theater and generate public programming that recalls the history of the Redneck Shop and of Laurens — a town named for the slave trader Henry Laurens — while looking ahead to a better future.

The project has backing from the movie production company 101 Studios, the city of Laurens and individual supporters. It has attracted the attention of presidential candidates Bernie Sanders, Elizabeth Warren and Pete Buttigieg. It has found an ally in rapper Killer Mike.

The nonprofit’s staff and board of directors now are seeking corporate donations in an effort to raise about $500,000.

Myths are stories distilled to explain mystery and convey universal truths. As with all such stories, the reality that informs them is far more complicated.

In 1994, Burden was like a son to Howard, who provided the troubled young man with a tribe to which he could belong. Their relationship was close and conflicted, according to Michael’s ex-wife Judy Burden, Kennedy and others in Laurens. Howard gifted Burden the deed to the Echo Theater in what was perhaps a gesture meant to elicit loyalty or express trust and affection.

In 1996, Howard opened the Redneck Shop, which immediately drew protesters, including a white man who drove his car through the front window. Kennedy and other black residents of Laurens and the surrounding area often demonstrated in front of the shop.

Michael and Judy Burden lived in the basement. They had met at a Klan event. Judy Burden, who is part Native American, grew increasingly uncomfortable with the group’s explicit racism and decided to quit, convincing Michael to do the same. Howard, furious, threw them out onto the street.

The Burdens were rescued from their homelessness by Kennedy and his congregation. They moved into a trailer owned by the Rev. Clarence Simpson, a member of New Beginning Church, who charged no rent.

“Why? The teaching of my pastor, and wanting to go to heaven,” Simpson said.

Before long, Burden needed money and sold the deed to the Echo Theater to Kennedy and his church for $1,000. That’s how, on April 22, 1997, the Redneck Shop and Klan hall in Laurens' historic downtown district became the property of a black preacher and civil rights activist with a reputation among whites in town for confrontation and, as some have complained, “race-baiting.”

Some African Americans were uncomfortable with Kennedy’s charity toward Burden but provided cautious support nevertheless.

The deed came with a condition: Howard could operate the shop, rent-free, until his death. In 2006, he tried to sell the deed and lost the ensuing court battle. He was forced to abandon the building in 2012. Five years later, Howard died.

The friendship between Burden and Kennedy would not last. Burden resumed his relationship with Howard, got in trouble with the law, spent time in prison, separated from his wife and left the state.

Today, Michael Burden is doing OK, earning a living, making his way through the world, according to Heckler, who has remained in touch with the man with an irresistible life story.

The older African American residents of Laurens remember well the Jim Crow laws that sustained segregation and imperiled their young lives. Kennedy recalled stories about poisonings and other attacks against black people. Simpson reminisced about the days when he sold life insurance and once entered the home of a Klansman who graciously served him coffee then demanded to know whether he approved of interracial marriage.

“Oh, I feel the same way as you!” the salesman responded in an effort to extract himself quickly from an uncomfortable situation. When he saw fire along the side of the road as he drove away in his Oldsmobile Cutlass, Simpson imagined it was a cross burning at a Klan rally.

The two men spoke of the generation gap: the fear that lingers in the bones of the old and the irreverence shown by many young black people unwilling to tolerate overt racism.

It was perhaps this lingering fear that prompted many African Americans in Laurens to avoid the protests in front of the Redneck Shop in the late-1990s and 2000s.

But Kennedy, leading the demonstrations, was adamant: “No! They are recruiting!” he argued. This wasn’t some neutered visitation of an ugly past; this was racism alive and well.

This is why the community center is needed, they said.

Regan Freeman, a young, white University of South Carolina graduate from Clinton who sits on the nonprofit board, is helping to coordinate the effort. He has met with city officials, community leaders, representatives of 101 Studios, potential corporate donors and members of the press to muster support, and he has overseen the construction a fundraising site, charity.gofundme.com/echoproject. The movie production company has launched a website in support of the project: rehabhate.com.

“The goal is to foster dialogue and reconciliation in Laurens County,” Freeman said. “We have momentum now.”

Once the renovations are complete, the center will have classrooms downstairs, a large event space and a lobby display. The project is meant to help revitalize the historic district and has city support.

“We would look forward to a dilapidated building made into a viable and suitable venue,” said City Administrator Gary Coleman, who added that Laurens officials are standing by to review and approve submitted plans.

Harry Agnew, a Laurens-area developer and member of the Echo Project board, said he hopes the center can launch an oral history project so older residents have a chance to record memories of their experiences over the years.

“Diversity” often is a stated goal, but the term means nothing unless people come together across racial and ethnic lines, share their stories and find ways to empathize with others, said Agnew, who is white.

“Sometimes a conversation has to be uncomfortable in order to be constructive,” he said.