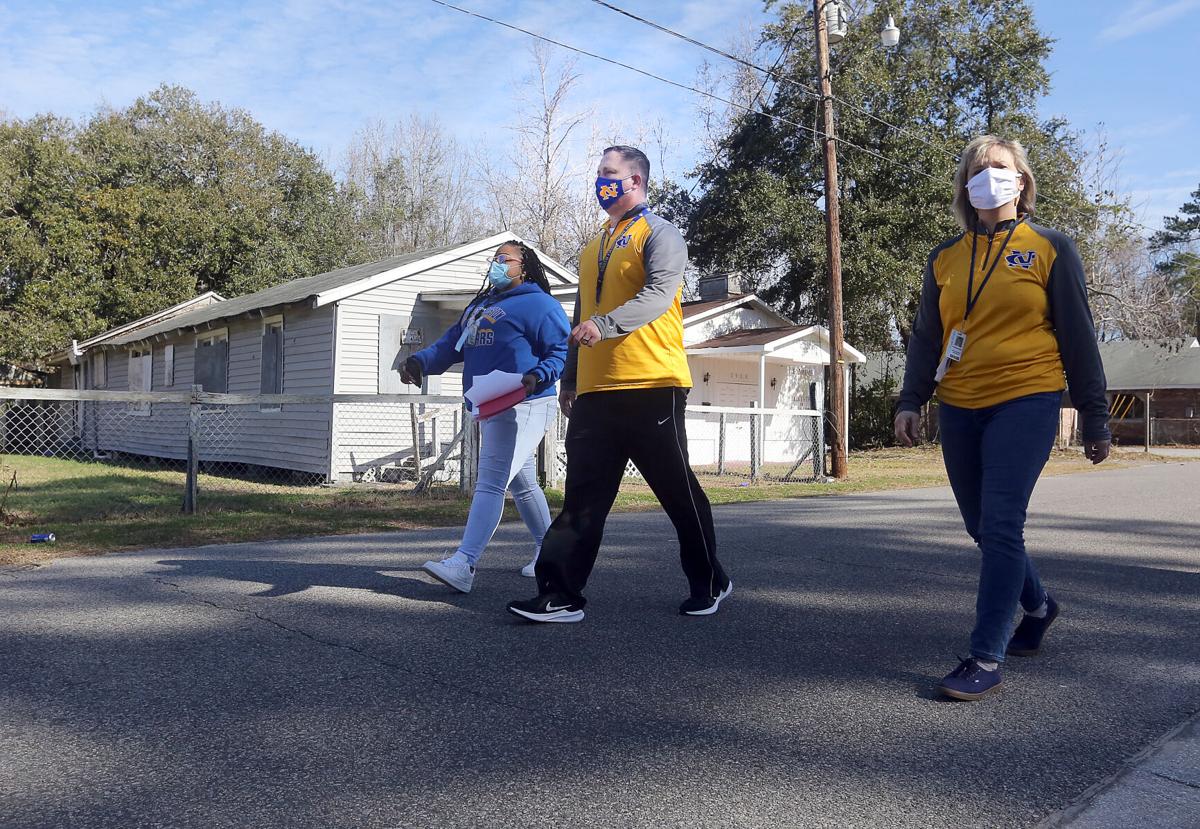 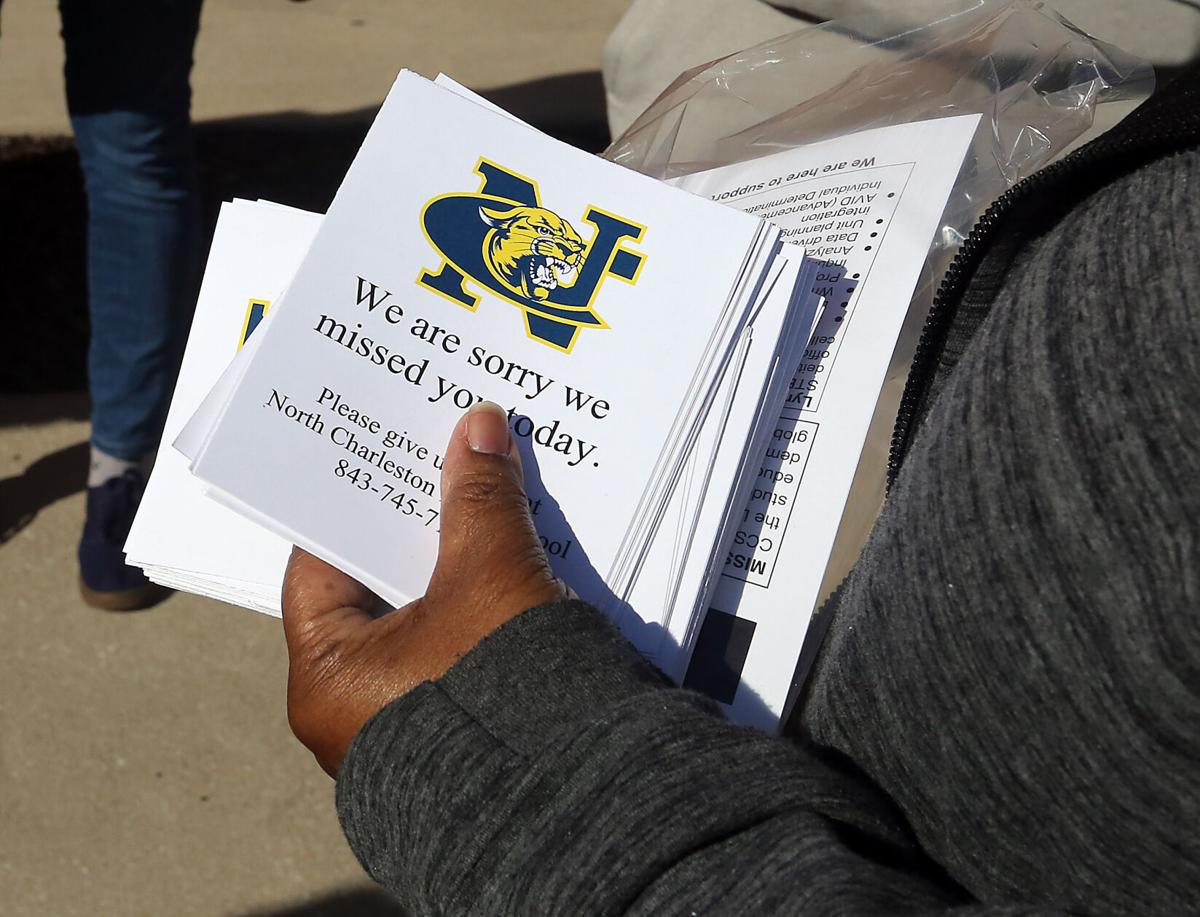 If the North Charleston High School team finds no one home, they leave a card wedged in the door. Brad Nettles/Staff 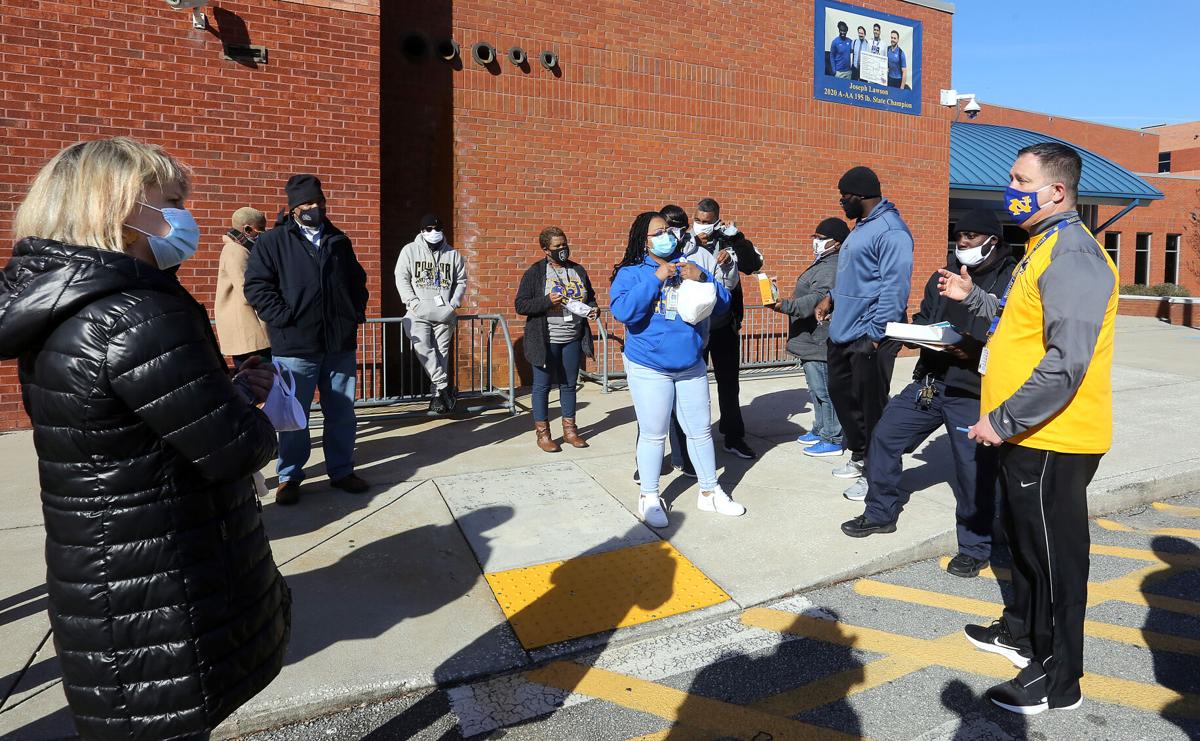 North Charleston High School Assistant Principal Tony Boyer talks to teachers and  other volunteers before they head out to check on students Saturday, Jan. 30, 2021. Brad Nettles/Staff 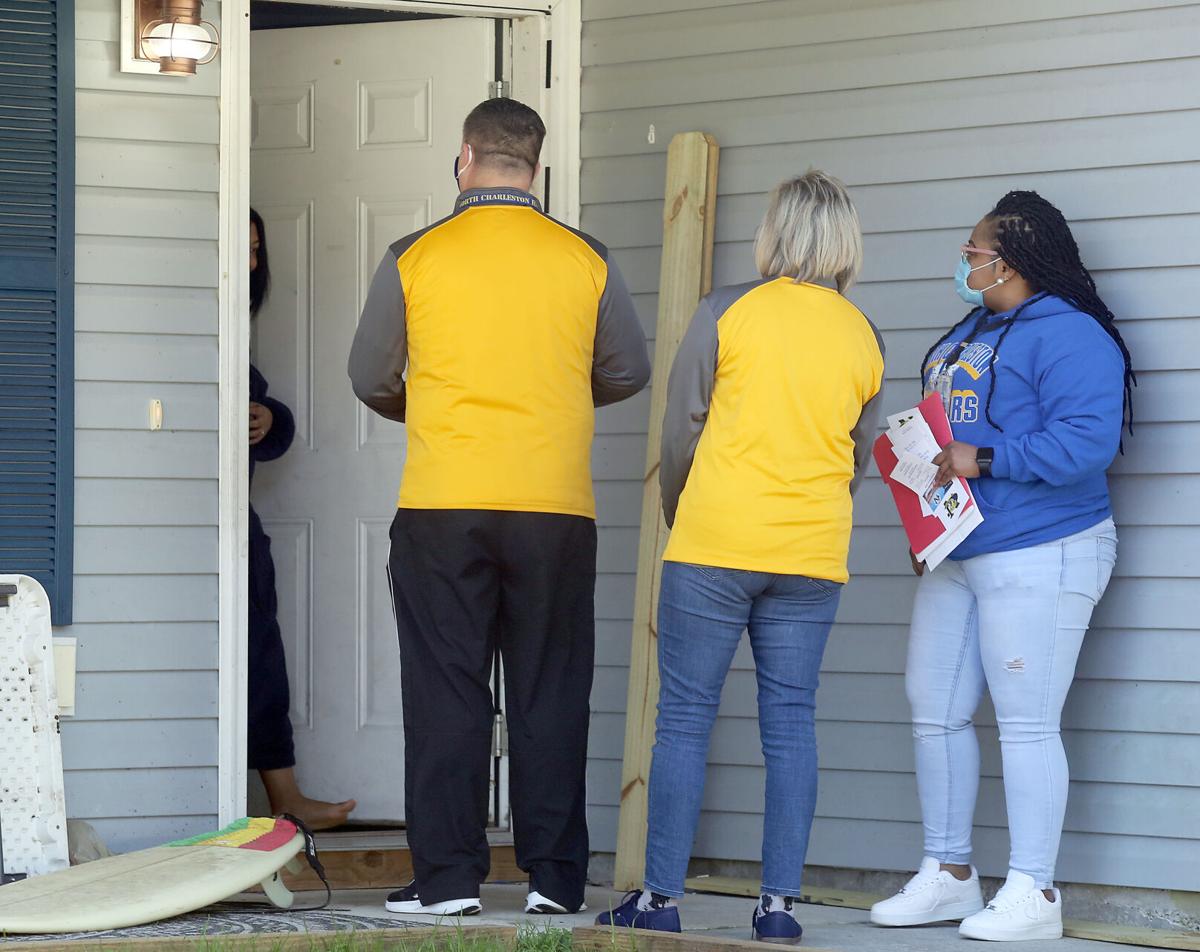 It’s hard enough to teach kids from high-poverty communities in normal times, but add a pandemic into the mix and the challenges multiply.

At North Charleston High School, whose student body is predominantly African American, teachers and staff no longer can concentrate solely on in-school learning; they must reach out beyond the walls of the building if they are to keep their students engaged.

So on Saturday morning, taking a cue from Principal Henry Darby, about 20 assistant principals, teachers and staff volunteered to go door to door to visit more than 100 kids struggling academically.

The foot soldiers dispersed in seven teams with a simple message: You will not be left behind.

This was the first time this crew had been assembled for this purpose, said Assistant Principal Tony Boyer, who coordinated the whole thing. It probably won’t be the last time, he said. The high school staff of about 50 are determined to be helpful.

“There’s a relentless attitude here that I’ve never seen before,” he said.

Boyer, joined by special education teacher Arian Rollerson and Assistant Principal for Instructors Hannah Studemeyer, first drove into the Ferndale neighborhood. At the door of one home, their reference to low grades prompted a student to smile in embarrassment, but Boyer was quick to make clear that this was not about admonishment.

“We just want you to know we're here to support you,” he said. “You’re part of our family.”

A couple more addresses in this part of town, then it was off to the Russelldale neighborhood and others.

Each team had a list of 15-20 homes and hit the street armed with mobile hot spot devices, in case families needed a way for their kids to connect to the internet for remote learning. If no one answered the door, they left a card emblazoned with the school logo: “We are sorry we missed you today,” it reads on one side. “Please give us a call.” On the other side there’s a photo of the school building, the names of staffers and another message: “We are here for you!”

Darby became principal of North Charleston High School in 2017. He has developed a reputation for tough love, determination and commitment. When The Post and Courier reported that he had taken a night job at Walmart stocking shelves to earn money he could use to assist families in need, the story went viral, prompting donations from readers and attracting the attention of NBC’s “Today" show.

His colleagues at Walmart didn’t know Darby was a school principal. When they understood what was going on, the company wrote a $50,000 check in support of the school and its families.

Darby said he knows that such charity, however sincere and generous, can be short-lived, that families in need will continue to struggle long after the news headlines disappear.

He also knows that his commitment would mean nothing if he decided now to stop stocking shelves from 10 p.m. to 7 a.m. It would be “ethically dishonest,” he said. “I am loyal to whatever organization I work for.”

This is the leadership that has inspired the school’s teachers and staff, Boyer said.

“He definitely brings out the best in us.”

North Charleston High has 800 enrolled students. About 600 of them are attending classes online only, mostly using Zoom, Boyer said.

Boyer said learning becomes more difficult without the traditional structure, schedule and physical safe space that schools provide. It requires that all involved — students, teachers and administrators — step up.

So teachers spend time online after school hours tutoring kids. Darby reaches out to families. At the beginning of the academic year, about half of the school's students were not checking in regularly or were failing, but school officials managed to connect with three-quarters of the missing and struggling kids.

Even district officials, such as Kala Goodwine, get involved in the effort.

Goodwine, a former principal, now is a director of student services working on the student engagement team. She was there Saturday morning armed with boxes of the mobile hot spot devices and a full supply of goodwill.

She and her team know that successful schooling is hindered by social and economic problems, including inadequate housing, food deserts, unemployment and the lack of pre-K and day care, she said.

Her job, in part, is to connect these dots and advocate for social equity and opportunity in order to better serve students from low-income neighborhoods.

Darby, who also has a seat on Charleston County Council, said his experience as a longtime educator informs his approach to politics. He has worked with council on a summer jobs program, on providing students with free bus passes, and other initiatives, he said.

He’s also rolled up his sleeves and embarked on one-man recruitment campaigns, hoping to convince White families to send their kids to North Charleston High School. When he arrived, the student population included just 20 White kids. Today, the number has increased to 51, Darby said.

North Charleston High is an example of a traditional neighborhood school that has been on the losing end of the school choice equation. The district long has encouraged families to apply each winter to send their children to affiliated magnet and charter schools. (The deadline is Feb. 26.) But this tends to direct talented and ambitious students away from neighborhood schools, exacerbating racial and economic segregation.

Diminished student populations often mean less money is flowing to schools that most need it. Historically, North Charleston High has suffered from lots of staff turnover, and this has added to the challenge of motivating its students to perform well.

Darby, who grew up nearby, said he is striving to combat some of the effects of this dynamic, conveying a sense of stability and purpose, setting high standards, and enjoining students, staff and teachers to do well. When he became principal at the high school, many students were ill-behaved and required discipline — even, in some cases, expulsion. He did not hesitate, he said.

But he also made it clear that he and his staff were there to help. Today, the solidarity is tangible, he said.

Studemeyer said the pandemic learning curve has been steep for all involved. And the kinks still are being worked out. Instructors are figuring out how to teach online, and how to solicit feedback from students in an effort to fine-tune the process, Studemeyer said.

Far more attention must be devoted to each student in a virtual environment compared with the classroom environment because of distance, isolation and non-academic impacts on students’ lives.

The kids are learning how to write emails and otherwise speak up — which is inadvertently teaching them a few key life skills, she added.

“It’s made people want to be more innovative,” she said.

The pressures on low-income families and their kids can be enormous. It doesn’t take much — the loss of a job, a broken-down car — to put a family into dire financial straits, and this can distract young students trying to push up their grades, Boyer said.

“If you are going to be an educator, you’re going to have to be part of the solution to poverty,” he said.