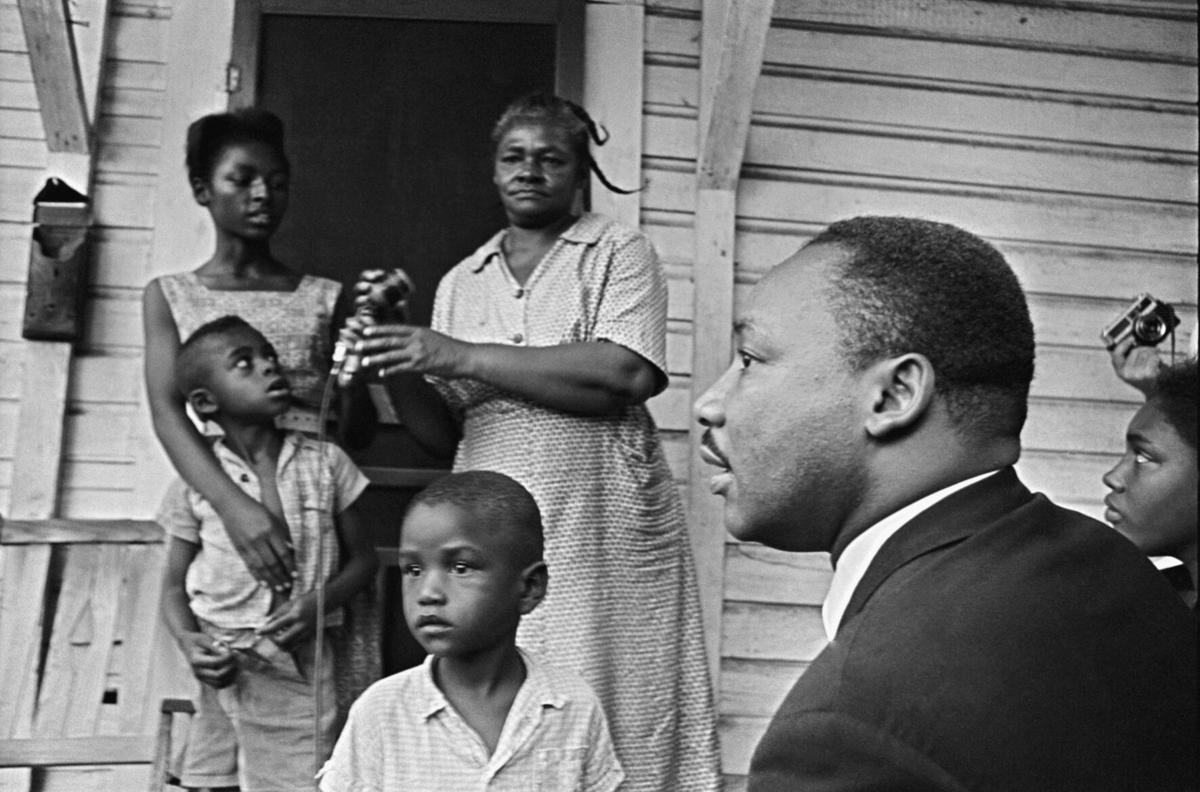 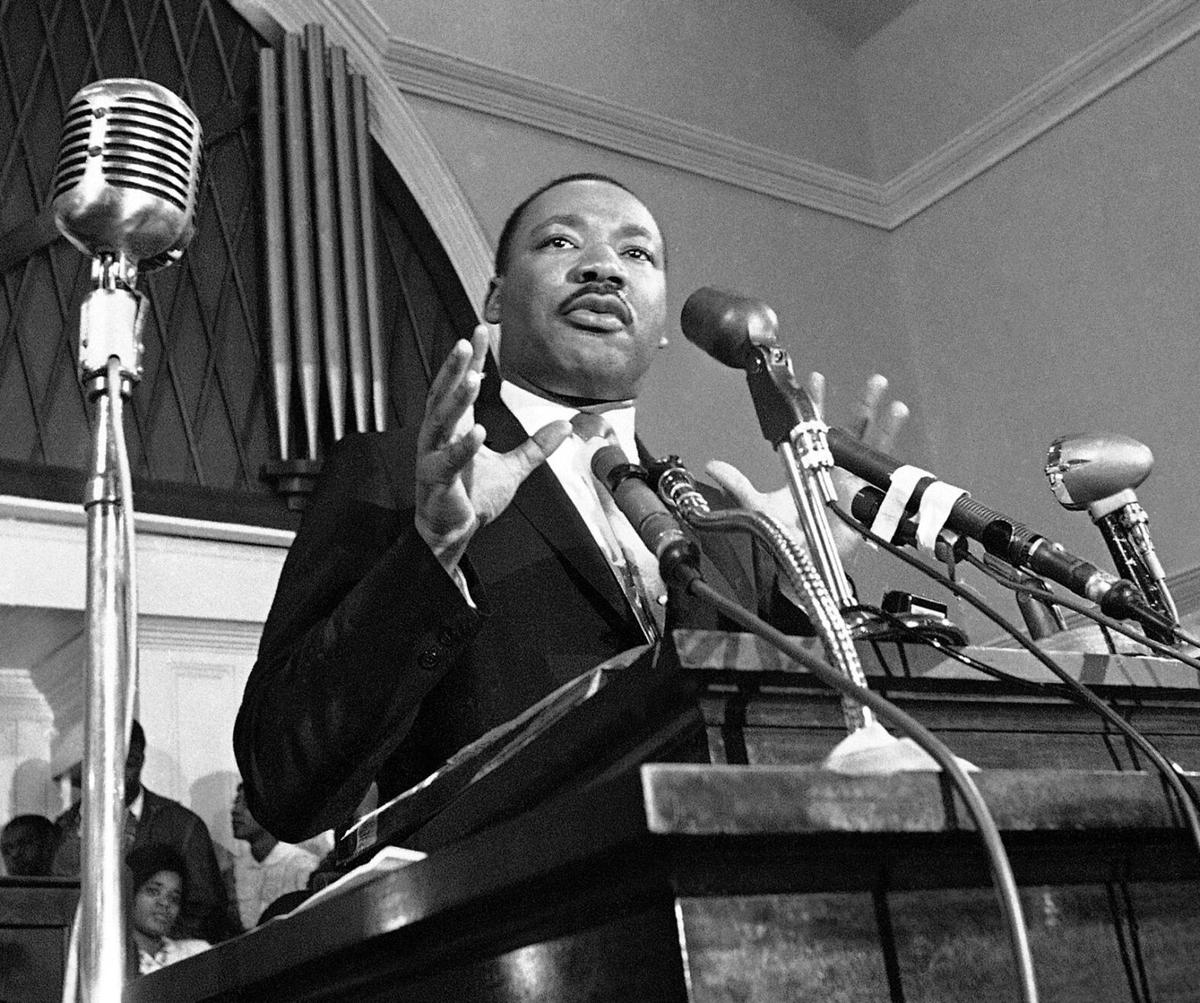 In this 1960 file photo, Martin Luther King Jr. speaks in Atlanta. The civil rights leader had carried the banner for the causes of social justice — organizing protests, leading marches and making powerful speeches against segregation, poverty and racism. File/AP 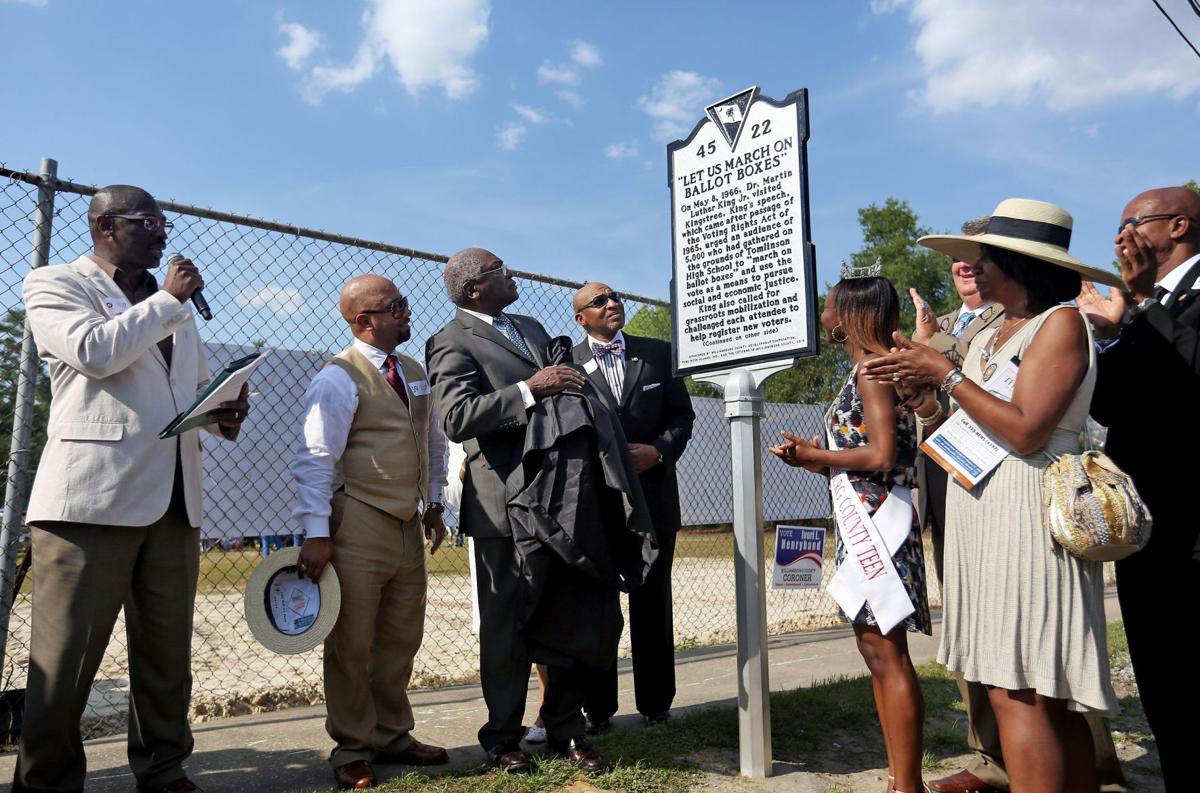 Rep. Jim Clyburn surrounded by several other state lawmakers and local dignitaries unveiled in 2016 a historical marker by the field in Kingstree where Martin Luther King Jr. delivered his "March on Ballot Boxes" speech of May 8, 1966. File/Grace Beahm/Staff 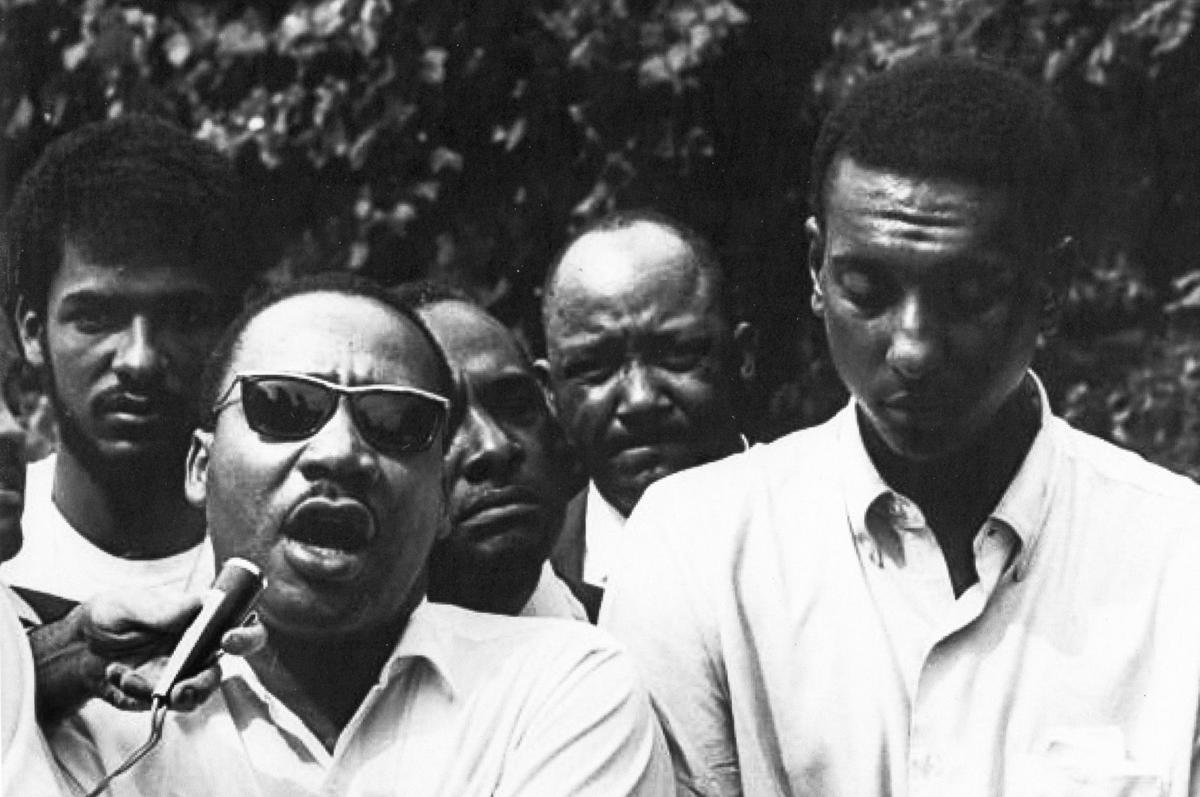 After Martin Luther King Jr.’s now-famous “I Have a Dream” speech, delivered at the March on Washington for Jobs and Freedom in 1963, FBI Director J. Edgar Hoover called King “the most dangerous Negro of the future in this Nation from the standpoint of Communism, the Negro and national security."

At the time, most Americans, including many Black Americans, disapproved of King. They considered him too aggressive, too demanding, too radical.

Today, some 53 years after his assassination in Memphis, King is remembered as an incrementalist who wanted, and secured, White allies. He was a leader who rejected calls for racial separation in the late 1960s, preferring instead to advance his concept of the “beloved community.”

But this characterization of King falls short, scholars insist. In fact, King was an intellectual, open to ideas from around the world, a student of history and politics and religion who was eager to absorb and process information he gathered from a variety of sources, including his more radical associates in the movement.

And he changed over time, said Bobby Donaldson, director of the Center for Civil Rights History and Research at the University of South Carolina. King began his career in political activism, almost reluctantly, as a young preacher who helped organize a protest against segregated busing in Montgomery, Ala., but became a renowned advocate for systemic reform.

“As long as he’s a civil rights leader, people can deal with it,” Donaldson said. After all, he was arguing, initially, that Black people should be able to gain access to the existing system. But once he turned his attention to the causes and consequences of economic injustice, concluding that a wholesale restructuring was needed, he was perceived by upholders of the status quo as a serious threat.

Black Lives Matter: What it is, what it does and how it fits in the history of civil rights

King was always thinking on his feet, always curious about what motivated others, said Cleveland Sellers Jr., an activist with the Student Nonviolent Coordinating Committee who knew King personally.

When students joined the struggle against segregation, starting in 1960 with the lunch counter sit-ins, King suddenly became (at age 31) an “elder” of the movement. Now there was a generational divide. King and his colleagues in the Southern Christian Leadership Conference and in the NAACP were playing a long game; young people, though, had had enough and adopted a more confrontational approach.

King watched and learned and saw opportunity to widen the movement and make it more impactful. He adapted.

By 1962, SNCC workers were in Mississippi registering Black people to vote. The young activists preferred community organizing over protest marches. This effort culminated in 1964 with Freedom Summer. King watched and learned, Sellers said.

In 1965, the Selma-Montgomery March again revealed to the nation the brutality of legal segregation, and it helped convince President Lyndon Johnson and members of Congress to pass the Voting Rights Act. But it also revealed the limitations of mass protests, for they did not benefit local communities very much, Sellers said. They did not change the condition of the poor.

In 1966, there was a split within the ranks of the movement. The March Against Fear, inspired by James Meredith, was the last big march of its kind during this period, and it included several civil rights groups whose agendas and tactics did not always align.

But this was more than a march. Along the way, activists registered voters, and each evening speakers discussed key issues, such as the philosophy of nonviolence, the notion of “Black Power,” and whether true integration was really possible.

One evening in late 1966, King surreptitiously invited Sellers and Stokely Carmichael and their SNCC colleague Willie Ricks to his house in Atlanta for dinner and conversation. King wanted the three young men to explain “Black Power.” He listened sympathetically.

By 1967, King was developing the idea (first proposed by Marion Wright of the NAACP) of a Poor People’s Campaign, which would involve grassroots community organizing in major cities, such as Chicago and Washington, D.C.

King wanted to find a “middle ground between riots on the one hand and timid supplications for justice on the other.” He wanted to pressure policymakers to address unemployment, an inadequate minimum wage, substandard housing in Black neighborhoods, and education disparities. He wanted African Americans to stand tall and speak loudly, to assert their pride and worth.

Nonviolent demonstrations were fine, to a point, but now more was needed. If the U.S. ever was to achieve true racial equality, it would have to address the inequities built into the superstructure of American democracy.

His rhetoric echoed that of Carmichael and Malcolm X — and he knew it, Sellers and Donaldson said.

King had taken a page out of SNCC’s book.

Back in 1963, King wrote his much studied “Letter from Birmingham Jail.” In it, he bemoaned the calls for moderation issued by eight White religious leaders in the South, liberal allies of the movement, who had argued that nonviolent civil disobedience was not “timely,” that it would only exacerbate political divisions, that patience was required.

King’s response: “Frankly, I have never yet engaged in a direct-action movement that was ‘well timed’ according to the timetable of those who have not suffered unduly from the disease of segregation. For years now I have heard the word ‘wait.’ It rings in the ear of every Negro with a piercing familiarity. This ‘wait’ has almost always meant ‘never.’”

“You get to 1967, and he’s calling for boycotts of white businesses in the South. From the perspective of 2021, that’s pretty radical stuff.”

In the letter, King defends nonviolent direct action as a middle way between two opposing forces within the Black community, complacency and bitterness.

“I have tried to stand between these two forces, saying that we need not follow the do-nothingism of the complacent or the hatred and despair of the black nationalist,” he wrote. “There is a more excellent way, of love and nonviolent protest.”

Yet the way of love is, as Christians know well, the most radical of all.

So King admonishes his critics who have accused him of “extremism”:

“I must make two honest confessions to you, my Christian and Jewish brothers. First, I must confess that over the last few years I have been gravely disappointed with the white moderate. I have almost reached the regrettable conclusion that the Negro’s great stumbling block in the stride toward freedom is not the White Citizens Councillor or the Ku Klux Klanner but the white moderate who is more devoted to order than to justice; who prefers a negative peace which is the absence of tension to a positive peace which is the presence of justice; who constantly says, ‘I agree with you in the goal you seek, but I can’t agree with your methods of direct action’; who paternalistically feels that he can set the timetable for another man’s freedom; who lives by the myth of time; and who constantly advises the Negro to wait until a ‘more convenient season.’”

Magid said radical movements, even those committed to nonviolence, seek systemic change and are motivated by a loss or denial of agency — when forces beyond your control determine your fate. And when change is resisted, some feel as if they have no choice but to lash out violently.

Rare recording of MLK speech made in Charleston sells in $68,000 civil rights auction

The civil rights movement was (and still is) an effort to claim agency. The radicalism of white nationalists today is, in some ways, similar, Magid said. These are people who believe “the country is being taken away from them,” who feel they are losing control over their fate.

“In some ways, they’re right,” he said. Demographic changes, advances in technology, globalization, growing sympathy for the Black Lives Matter movement, and a shift in values toward inclusiveness and diversity all threaten the hegemony of Whites in the U.S. Some degree of resistance is inevitable, Magid said. The difference, of course, is that civil rights activists seek social and political improvements; in a word, progress. White nationalists seek to prevent such progress. It’s part of a familiar cycle, he said.

“We’re experiencing a period of radicalization,” he said. “The liberal middle doesn’t really know what to do.”

During the 1950s and ’60s, it was King and Malcolm X who most prominently embodied the two forms of radicalism embedded in the freedom movement. King believed in and fought for racial harmony (or at least cooperation), while Malcolm preached separatism.

The two men’s ideological trajectory intersected and crossed. By the end of Malcolm’s life, he had rejected the extremism of the Nation of Islam and, informed by his world travels, embraced the possibility of racial cooperation and brotherly love. He had tempered his rhetoric accordingly, though added a new internationalist idea: the Black freedom struggle in the U.S. was inseparable from Black struggles elsewhere in the world. This practical awareness suddenly made him more dangerous, Donaldson said.

King, too, began to connect the dots and assert publicly the idea that capitalism itself — at least the way it was structured in the U.S. and elsewhere — was the problem. He showed how the fight for freedom and equality could not be separated from economic practices and even foreign policy, that solutions to the problems Black people faced required systemic reforms, Donaldson said. A court decision declaring segregation unconstitutional was important but insufficient.

In 1967, King argued (against the advice of his associates) that it was immoral to spend huge sums on a war in Vietnam when there was so much suffering at home in the U.S. The Poor People’s Campaign was his effort to address these intractable problems, and it frightened many in power.

“King was not just about civil rights,” Donaldson said. “He was about consciousness-raising. Part of what made him dangerous is that he was so charismatic and gifted that he was actually compelling people to think differently about themselves and encouraging them to question the nation.”

King the dreamer could be tolerated, he said. King the revolutionary was another matter altogether.