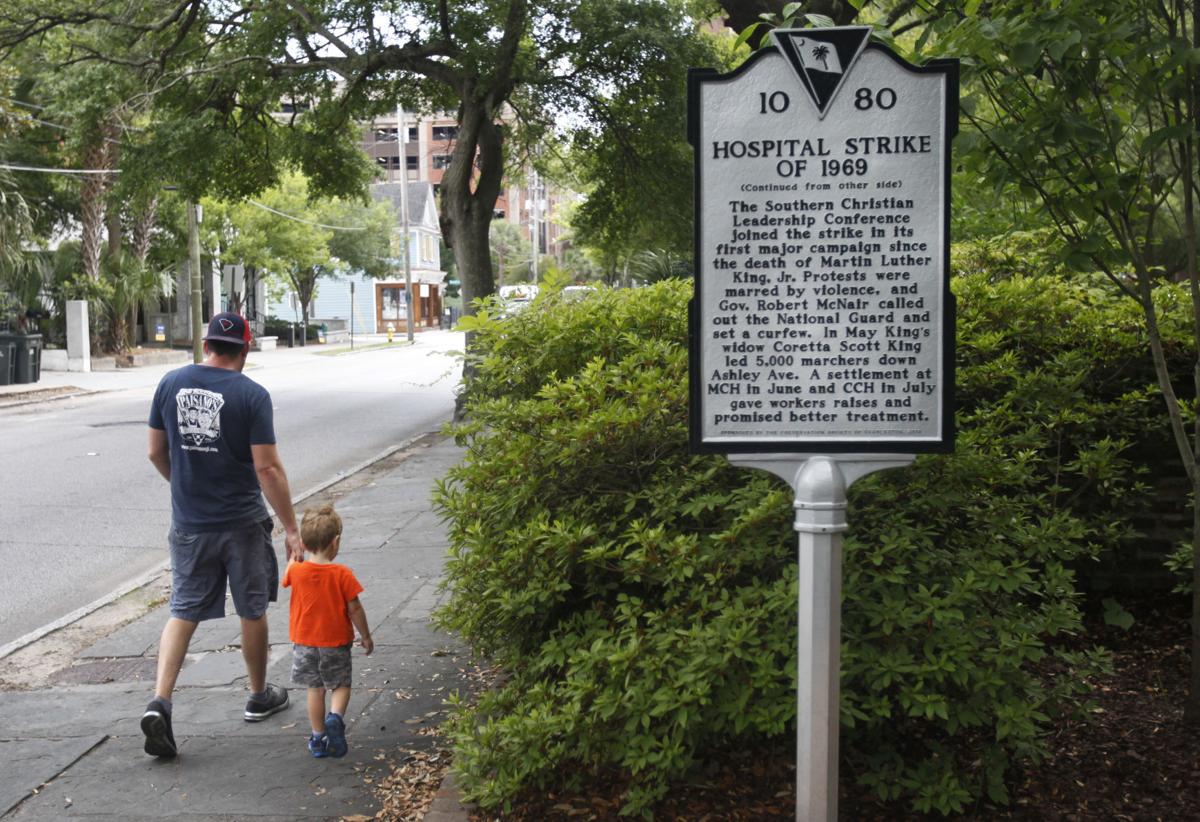 Few pause to read the Hospital Strike historical marker by the campus of the Medical University of South Carolina. Mary Alston Herres/Staff 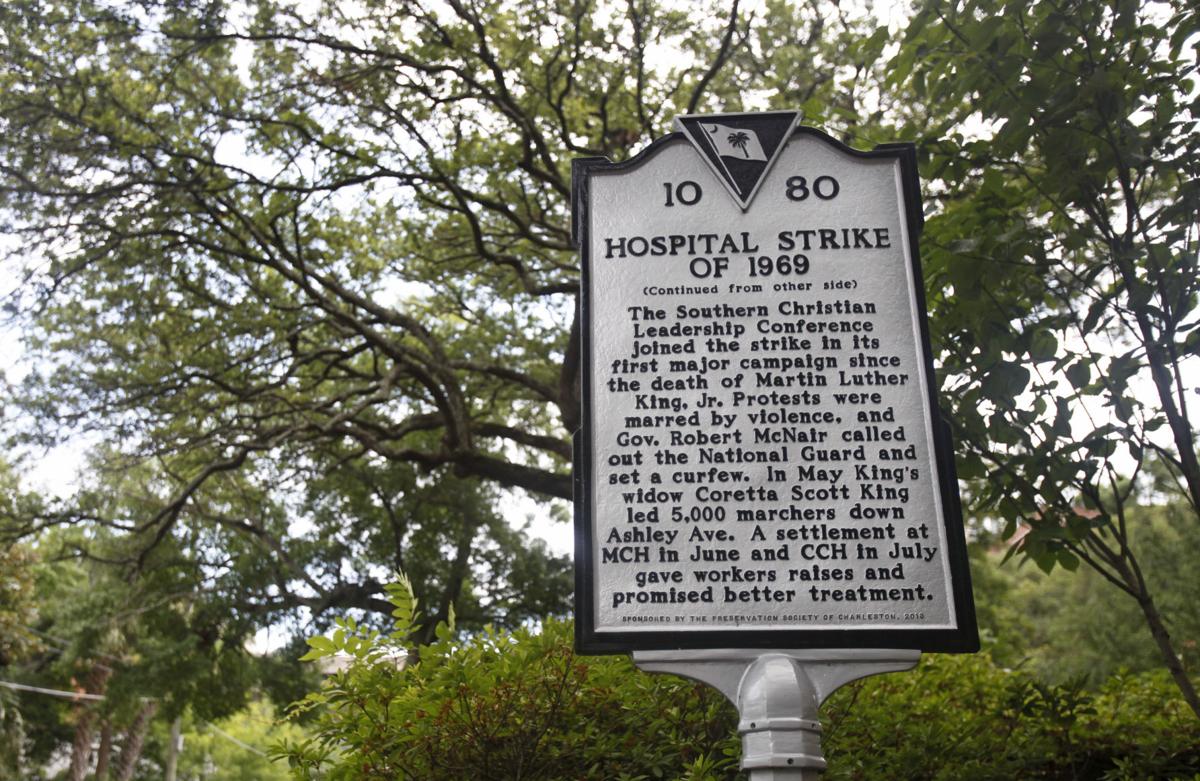 Few pause to read the Hospital Strike historical marker by the campus of the Medical University of South Carolina. Mary Alston Herres/Staff

The only physical remembrance at the Medical University of South Carolina of the 1969 hospital workers strike is a silver-and-black historic marker that stands modestly along a pedestrian entrance to the campus.

It describes, succinctly, what happened that spring. But on a recent weekday afternoon, few stopped to read it, few used this entrance, few walked along this stretch of Ashley Avenue where the marker, nestled in some foliage, is visible in front of the College of Dental Medicine.

On this particular day, only one or two employees sat nearby on a bench to eat lunch, lost in their private thoughts, seemingly unconcerned about an event that took place 50 years ago.

Nevertheless, the strike was one of the most significant episodes of the civil rights movement. It was the last large-scale civil rights march of the 1960s. It came in the wake of Martin Luther King Jr.’s assassination a year earlier and revitalized King’s Southern Christian Leadership Conference. It helped extend King’s Poor People’s Campaign, which focused on economic justice issues. It galvanized Charleston's health care workers and put their supervisors on notice.

"It began as a dispute between employers and employees but became an international issue," said the Rev. William Barber during a recent visit to Charleston where he honored strikers and called for a renewed Poor People's Campaign. "(The workers) didn't just protest, they won."

The strike marked a major turning point not only for SCLC and the civil rights movement, then in its mature “Black Power” phase, but for what at the time was called the Medical College of South Carolina — and, by extension, all of South Carolina. The discrimination of Jim Crow would no longer be taken lying down. Even middle-age black nurses were standing up and speaking out.

"What they did then is still impacting us today," said Millicent Traeye Middleston, daughter of County Hospital striker Hermina Traeye.

For years, the freedom movement mostly had been led by educated young people who had organized voting drives, lunch-counter sit-ins, mass marches and other forms of direct-action protest. By 1969, though, older African Americans in Charleston, simultaneously proud of the young agitators and worried about their safety, were taking note of the “unfulfilled promises of the movement,” and they decided to take matters into their own hands, according to Bobby Donaldson, history professor at the University of South Carolina and director of the Center for Civil Rights History and Research.

Today, the faculty, staff and students at the MUSC are beneficiaries of the efforts and sacrifices made by the black nurses who went on strike, and by the men and women in the community who rallied support for them, Donaldson and others said.

“This strike’s significance and place in history is often overlooked,” he said. “The assumption is that the civil rights movement comes to some sort of conclusion in 1968 with death of Dr. King. If anything, the strike could be seen as the culmination of the work Dr. King did.”

It closed a circle, coming six years after the 1963 March on Washington for Jobs and Freedom which, earlier in the movement, was concerned with economic disparities, Donaldson said.

The history of the strike is not formally taught to students at MUSC today, though the topic sometimes comes up.

“All students received communications and were invited to attend on-campus events and retrospectives about the strike this year as part of the 50th commemoration programming during the week of May 6th, so when appropriate we are providing opportunities to review and learn from that specific moment in time for our students,” wrote Heather Woolwine, director of MUSC public affairs and media relations, in an email.

Students at the Medical University are naturally occupied with the study of medicine and related subjects and are not offered history or civil rights courses.

“The University’s focus has been on the broader importance of diversity and inclusion as (students) move forward in their studies to become health care providers,” Woolwine wrote.

The hospital workers strike also is not often taught in the Charleston County public schools, according to former and current history teachers. It is not mentioned in the social studies standards and therefore not typically cited when educators discuss the civil rights movement.

“I wish it was something that was brought up,” said Christine Lloyd, who taught social studies for three years at Laing Middle School until taking maternity leave in January 2017. “I think you feel such pressure to cover certain standards, for some reason or another by the time you get to the 20th century, you feel pressed. It’s hard to cover it like you want to.”

When she took students on a downtown walking tour, she would refer to the 1960 Kress lunch counter sit-ins led by Burke High School students, and she would mention the 1968 Orangeburg Massacre at S.C. State College when highway patrolmen fired lethal buckshot into a crowd of unarmed students on campus, killing three and injuring at least 28.

“I never thought to bring up the hospital strike, which makes me sad,” Lloyd said.

Heath Orvin teaches ancient history at Charleston County School of the Arts and prepared his own curriculum that includes some contemporary events, he said. Around Labor Day each year he devotes a whole session to the topic of workers’ rights.

“Recently, I brought up the hospital strike,” Orvin said. He mentions to students what he sees as the hypocrisy of state officials who pay tribute to the black nurses of 1969 trying to secure better wages and better treatment but condemn school teachers who walked off the job on May 1.

Orvin said he cites the hospital strike as an example of labor unrest in South Carolina, along with the longshoremen’s strike of 1999 that resulted in violent confrontation between dock workers and police and the arrest on felony riot charges of five men.

But the hospital workers strike was different, he said.

“This was racially charged, it became a black and white issue,” Orvin said, adding that too few of his fellow teachers in South Carolina draw adequate attention to the event in their classrooms.

Mothers of the movement

The Rev. Nelson Rivers III, pastor of Charity Missionary Baptist Church and Charleston native, was an 18-year-old finishing his freshman year at Wilberforce University when the hospital workers strike began. That summer, armed with a taxi license his father had arranged to secure for him, Rivers spent much of his time downtown.

Workers and their supporters often met at Emanuel AME Church, Morris Street Baptist Church, Morris Brown AME Church and others to strategize and support one another. Many ensured financial strain during the months of the strike and depended on the social safety net these churches provided.

He witnessed the harassment of strikers by the police, and was not immune to such treatment himself, he said.

“I was stopped three times because of that hat,” he said. “One police officer stuck his billy club in my chest and warned me not to come around here.”

But too few people know about this episode now, Rivers said.

50 years after Roper Hospital was forced to admit black patients, a black CEO is in charge

“The hospital strike was a great opportunity to watch (labor) organization become effective against the odds,” he said. “If it were not for the mothers of the movement — those women, those black women, their courage, their sacrifice, their fierce commitment to being treated like a human being — the movement in Charleston would not have existed. ... They ignited a radical new approach that was more confrontational than the approach before.”

That legacy must be honored with action, Rivers said, acknowledging MUSC’s successful diversity efforts but insisting that much more should be done.

“Because of the strike, MUSC has an obligation today to be a leader. It’s so big, so powerful, has so much money, they can do more than others. They can do the right thing without concern for retribution. They’re too big to fail.”

“The assumption was that people should now be reaping the benefits of the movement, but in Charleston, respect and fair wages were not there,” he said. “This was the period of Black Power and black pride. The rhetoric is changing. Before, it’s ‘We Shall Overcome’ nonviolent direct action, and Charleston strikers believed in nonviolence, but the tone was (changing).”

“This was a year after the tragedy of Orangeburg, and the last thing anyone wants is for South Carolina to get another black eye because of some unwieldy protesters who now have to be checked by law and order.”

Suspicions of black agitators generally ran high during this period, but in Charleston the agitators — mostly middle-aged black women — undermined assertions by the authorities that protesters represented a danger to society.

These are important lessons that have value today, Donaldson said.

“Part of the challenge at the 50th anniversary (of the strike) is filling in the gaps,” he said.