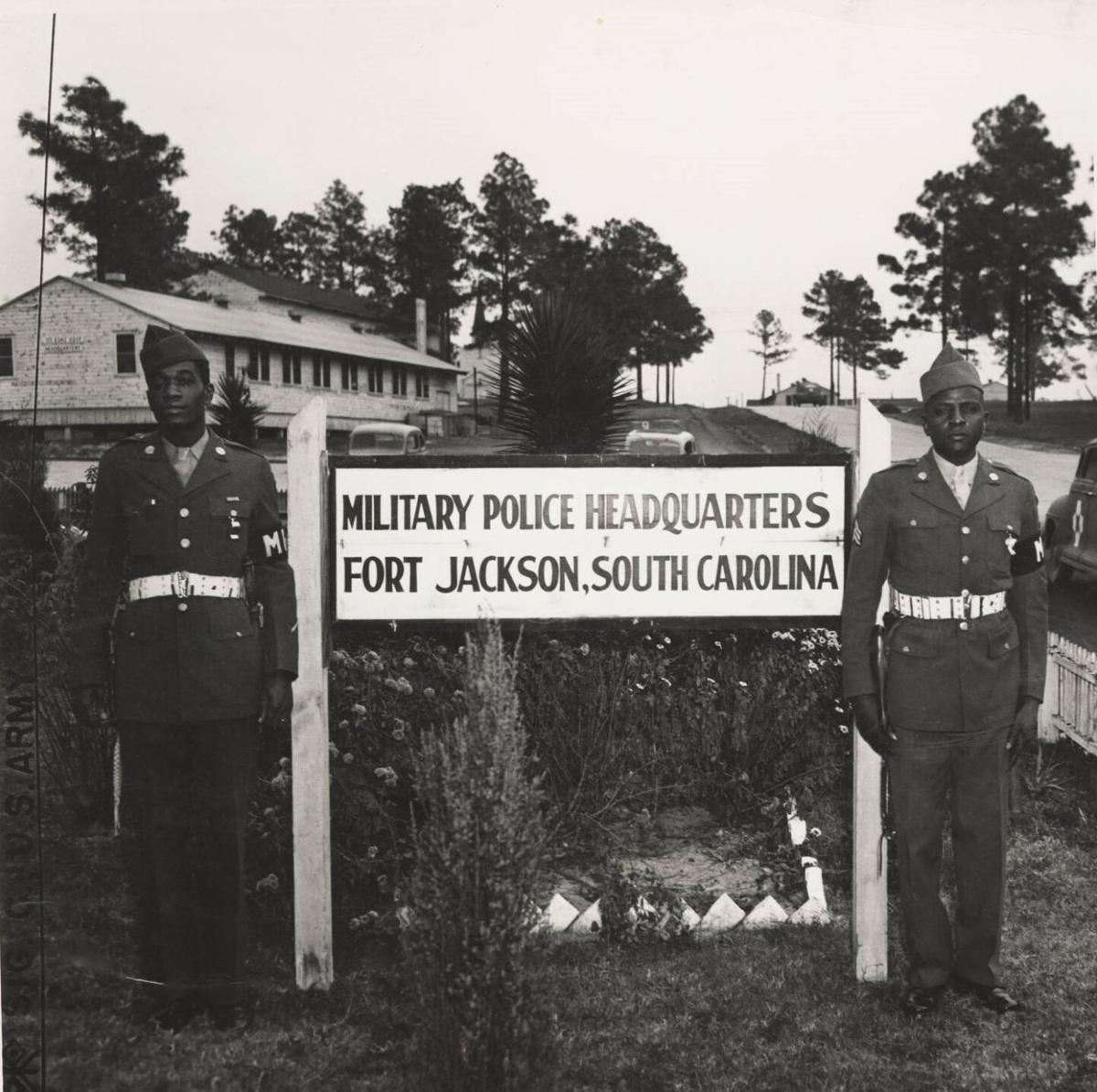 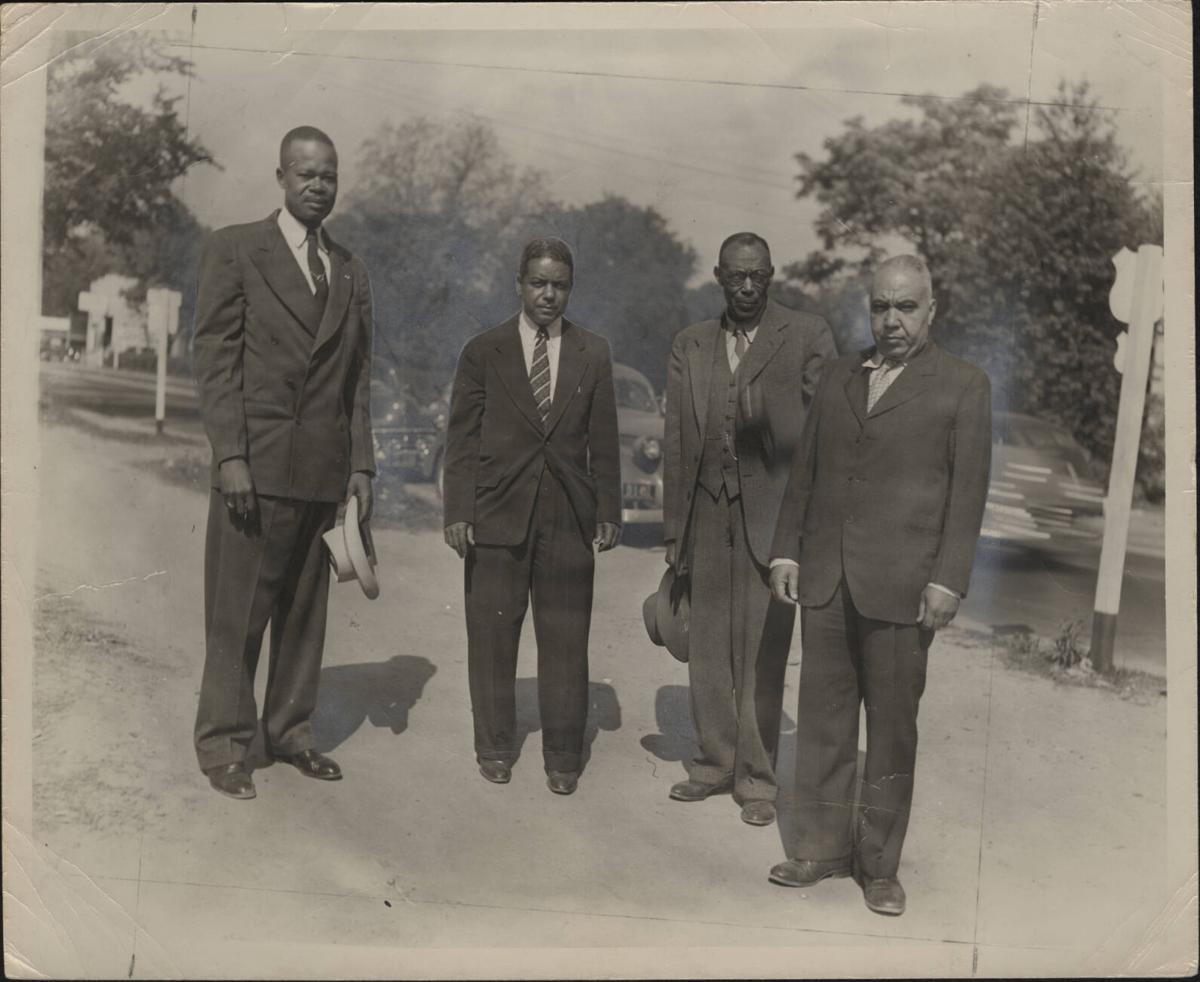 John H. McCray (from left), Peter Ingram, J.C. Artmus and James M. Hinton are pictured together in 1948. McCray was publisher of the newspaper The Lighthouse and Informer and an ally of the NAACP. Hinton was president of the South Carolina NAACP conference at the time, and active in pursing legal remedy for institutional discrimination. John McCray/University of South Carolina, South Caroliniana Library/Provided 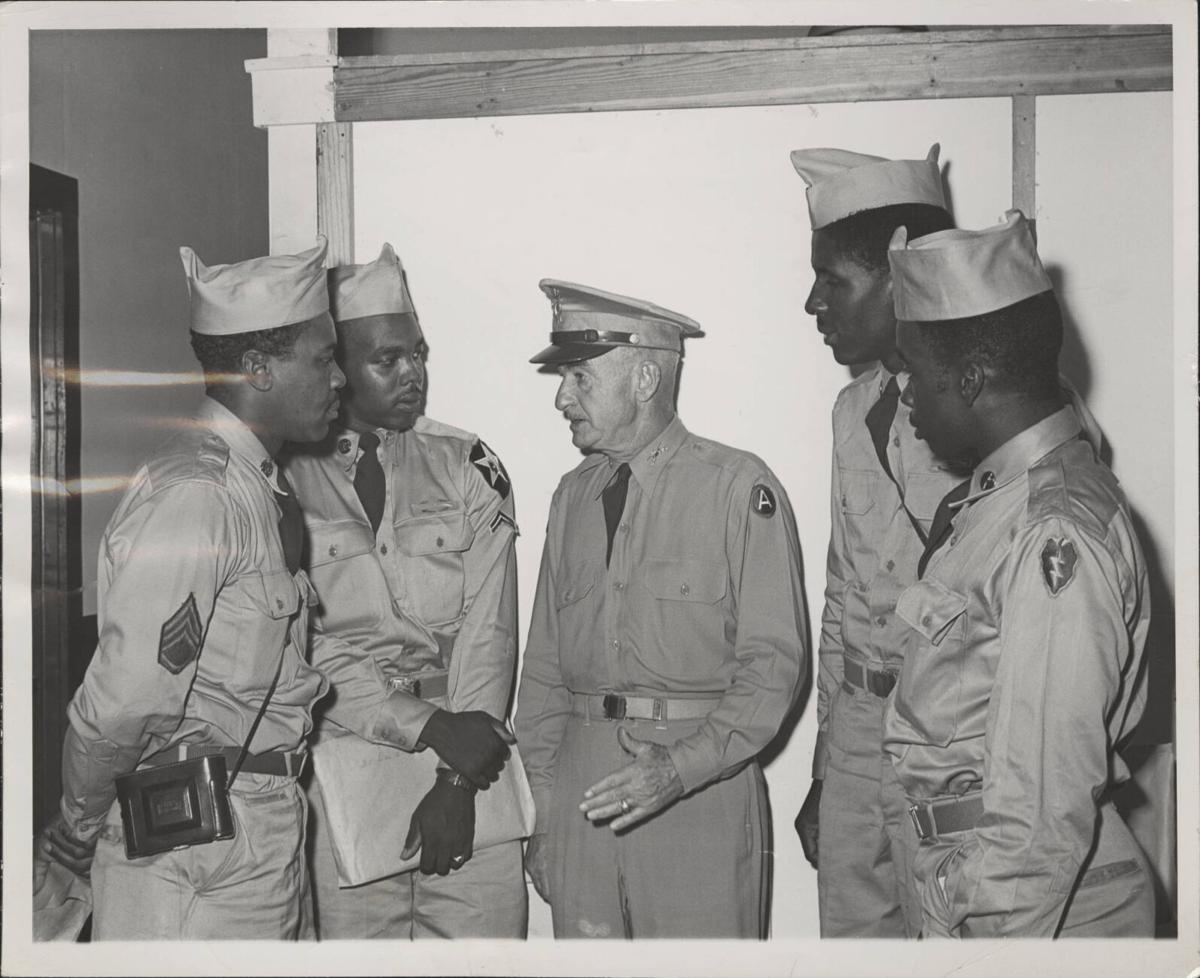 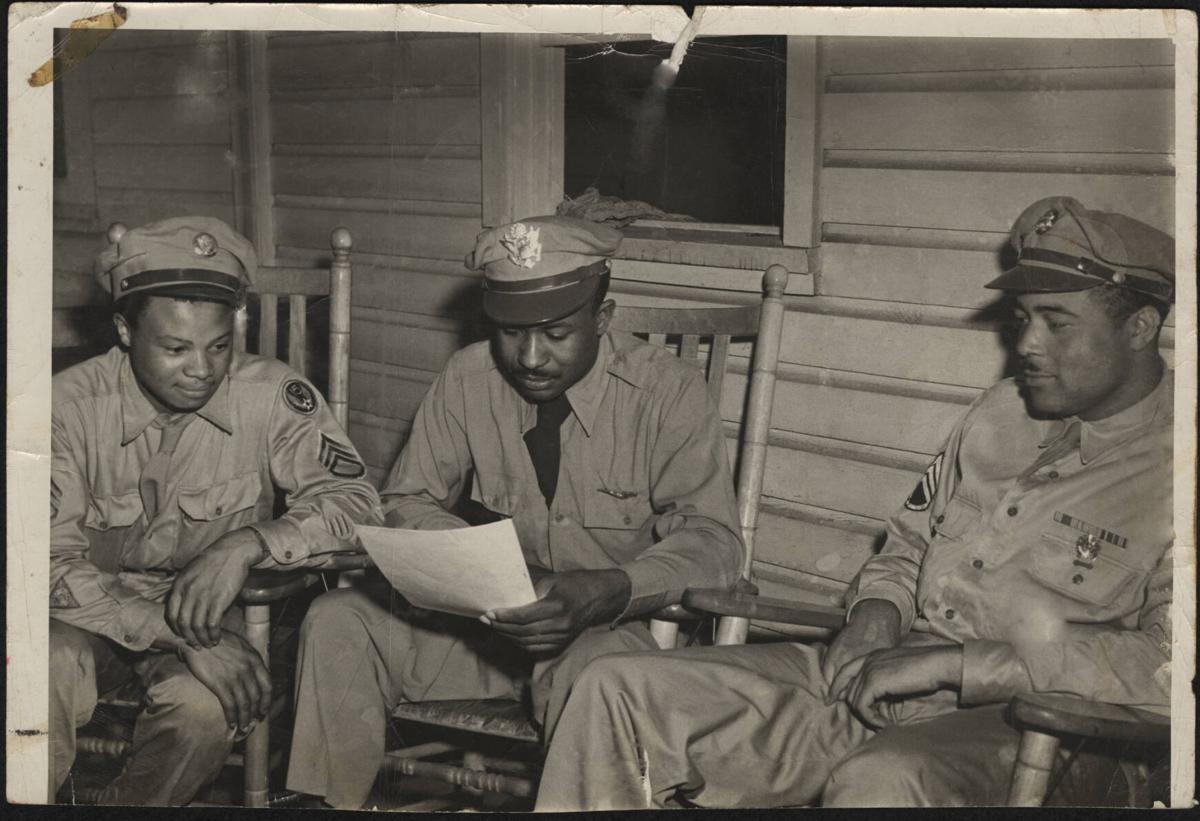 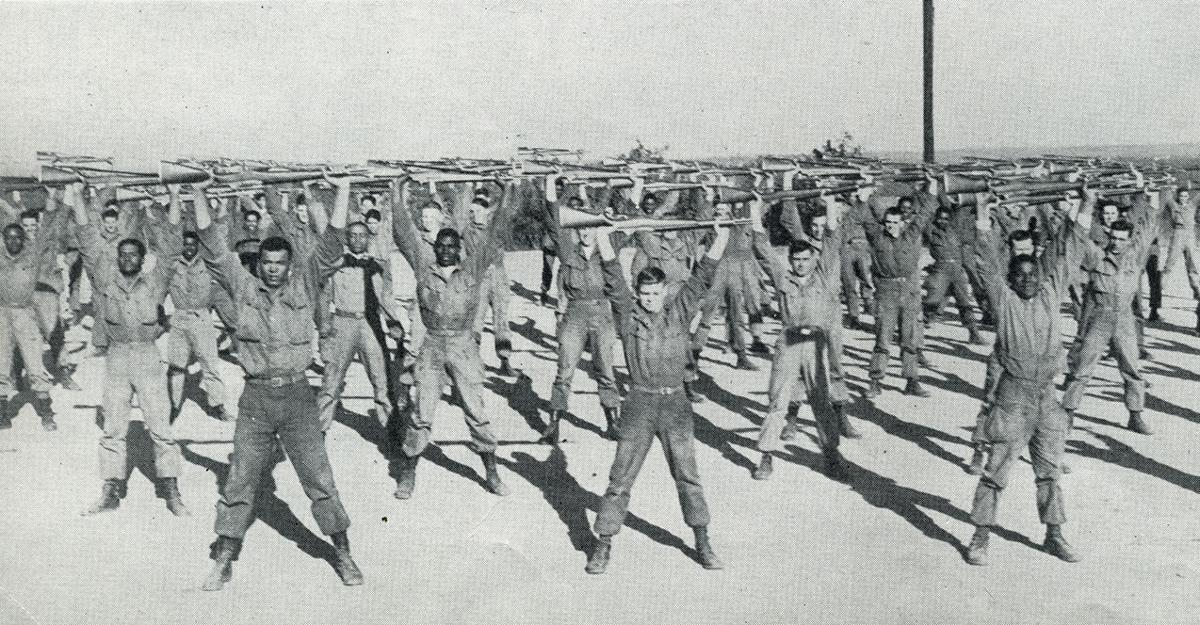 COLUMBIA — On Thanksgiving 1953, Robert Green was 18 years old, nearly finished with basic training at Fort Jackson and looking forward to a day off in Columbia. The highlight of the urban adventure was a USO event and a little dancing.

But the holiday didn’t end well.

When Green and 49 other African American soldiers loaded onto a crowded bus that would take them back to their barracks, one of the men sat next to a White woman.

She complained, setting in motion a sequence of events that quickly led to mass arrests and a vindictive judge’s bad judgment.

It was an example of injustice common at the time, and it was eventually forgotten. Green went on to a productive career as a letter carrier in Atlanta and a talented bridge player.

On Oct. 29, he received the key to the city from Columbia Mayor Steve Benjamin. And the story of that distant Thanksgiving Day — a reminder of the perils Black people faced during that long period of legal segregation — was unlocked from its memory vault.

When the group of soldiers boarded the bus, one of them found an empty seat next to a White waitress. Across the narrow aisle sat a White couple with a young child. President Harry Truman had desegregated the military in 1948, so the soldiers were accustomed to interactions with White comrades.

The waitress admonished her seatmate, insisting that, in Columbia, the races don’t mix, but the Black man had nowhere to go. So the woman complained to the driver who maneuvered the bus in proximity of a police officer.

The patrolman tried to arrest the Black soldier, but 2nd Lt. Austell O. Sherard intervened. Sherard was a S.C. State College graduate and Iva native who had just returned from a tour in Korea, where he had been wounded in the leg, earning him a Purple Heart and Combat Infantryman’s Badge, according to research conducted by Andrew H. Myers, author of “Black, White, and Olive Drab: Military-Social Relations During the Civil Rights Movement at Fort Jackson and in Columbia, South Carolina.”

The only officer on the bus, Sherard felt it was his duty to defend his Army colleague, even as other soldiers began to protest. The patrolman called for backup, then ordered the driver to take the bus to the city jail, where the Black men spent an uncomfortable night.

Mostly, they did not know one another, Green told The Post and Courier. The soldiers served in a variety of units at Fort Jackson and happened to find themselves together on this bus.

Sherard was there because he had been visiting his fiancée, who lived near the Taylor Street USO, Myers said.

The next morning, Fort Jackson officials asked Judge John Rice to release the men to the Military Police or, at least, treat them with leniency. But Rice would do no such thing.

This was the man who, in 1946, refused to comply with the U.S. Supreme Court’s decision that declared segregated primary elections unconstitutional. The NAACP and Black activists in South Carolina, including Modjeska Simkins and newspaperman John McCray, had formed the Progressive Democratic Party to challenge the state’s established Democratic Party and its systematic voter suppression of African Americans.

This was the man who denied George Elmore, a light-skinned Black man who had succeeded in registering, access to the ballot.

This was the man who the NAACP sued in federal court and who lost his obstructionist battle in 1947 when Judge J. Waties Waring ruled in favor of the plaintiffs.

“It is time for South Carolina to rejoin the Union,” Waring said at the time.

Elmore had mustered the courage to challenge established white supremacy. He won his case but paid dearly, according to Bobby Donaldson, director of the University of South Carolina’s Center for Civil Rights History and Research, which has archived an interview with Elmore’s son, Cresswell Elmore.

Elmore was forced to declare bankruptcy. The family moved from house to house. In 1959, at the age of 53, Elmore died.

When Rice confronted the Black soldiers, he showed no mercy, fining nearly all of them $25.50 (equivalent to about $250 today). The lieutenant who stepped forward to protect the others, was fined $200 (nearly $2,000 today).

None had legal representation.

Green said that each time Sherard tried to address the judge, Rice ordered him to be quiet, told him he was out of order and increased the fine.

The NAACP quickly became involved, filing an appeal as well as a lawsuit against the city of Columbia. They notified President Dwight D. Eisenhower and Pentagon officials, increasing the pressure campaign against the city.

The military brought the matter to a quick end, though not without a degree of cynicism. “This will get them off our backs,” remarked a Pentagon official in reference to the NAACP.

An agreement was reached between Fort Jackson leaders and Columbia officials. The Army determined not to reprimand the soldiers. And the charges against Sherard and one other were dropped — though the incident permanently stalled Sherard’s military career, according to Myers.

The fines paid by the enlisted men (or their Army overseers) were never refunded.

Over the next three decades, Green didn’t think much about that Thanksgiving Day. He went on to train as an airborne infantryman at Fort Bragg in North Carolina and Fort Lee in Virginia, completed his three-year commitment to the Army, then returned home to Tuscaloosa, Ala., where he enrolled at Alabama State University, met his wife and, in 1960, started playing bridge competitively.

Soon after, the Greens relocated to Atlanta, where he found reliable work as a letter carrier and she became a school teacher.

In the 1980s, JET Magazine ran a feature about the bus arrests, noting that Sherard got his money back. It was an unexpected reminder of that long-ago episode which had put human dignity and social justice on the defensive.

Now 85, Robert Green continues to play bridge with friends. Retired for 28 years, he has earned “life master” designation from the American Contract Bridge League (desegregated in 1967) and he has often participated in events sponsored by the American Bridge Association, whose membership is predominantly Black.

One evening in the spring of 2019, months before the COVID-19 pandemic forced him to shelter in place, Green was playing bridge at an Atlanta club. At the table sat Henrie Monteith Treadwell. Green did not know that Treadwell was among the first three Black students to enroll at the University of South Carolina. He did not know that she grew up immersed in the civil rights movement, that one of her aunts was Modjeska Monteith Simkins, and that she maintained ties to her alma mater.

All he knew was that she was from Columbia, the city in which he had been arrested in an act of collective punishment, the city that was supposed to provide him with a fun day off, the city that instead revealed itself as a place that did not welcome Black people in 1953 or treat them with respect.

So he told her the story, wondering aloud, and with a glint in his eye, whether he’d ever get his $25.50 back.

Treadwell contacted Donaldson, who in turn did some research, assisted by doctoral student Christopher Frear. Together they reconstructed the events of that unfortunate episode and found some small way to repair the damage.

"For decades, 'Robt. Green' was simply a name on a frayed 1953 arrest log," Donaldson said. "I am delighted that we are able to assist him in sharing his story of service and sacrifice. ... I am hopeful that this recognition and the documentation of this critical but overlooked chapter in the struggle for civil rights are important steps in correcting this injustice."

Green said he never received an apology, or a refund.

But he did discover a different Columbia — a city run by an African American mayor who bequeathed Green a special key of perennial welcome.