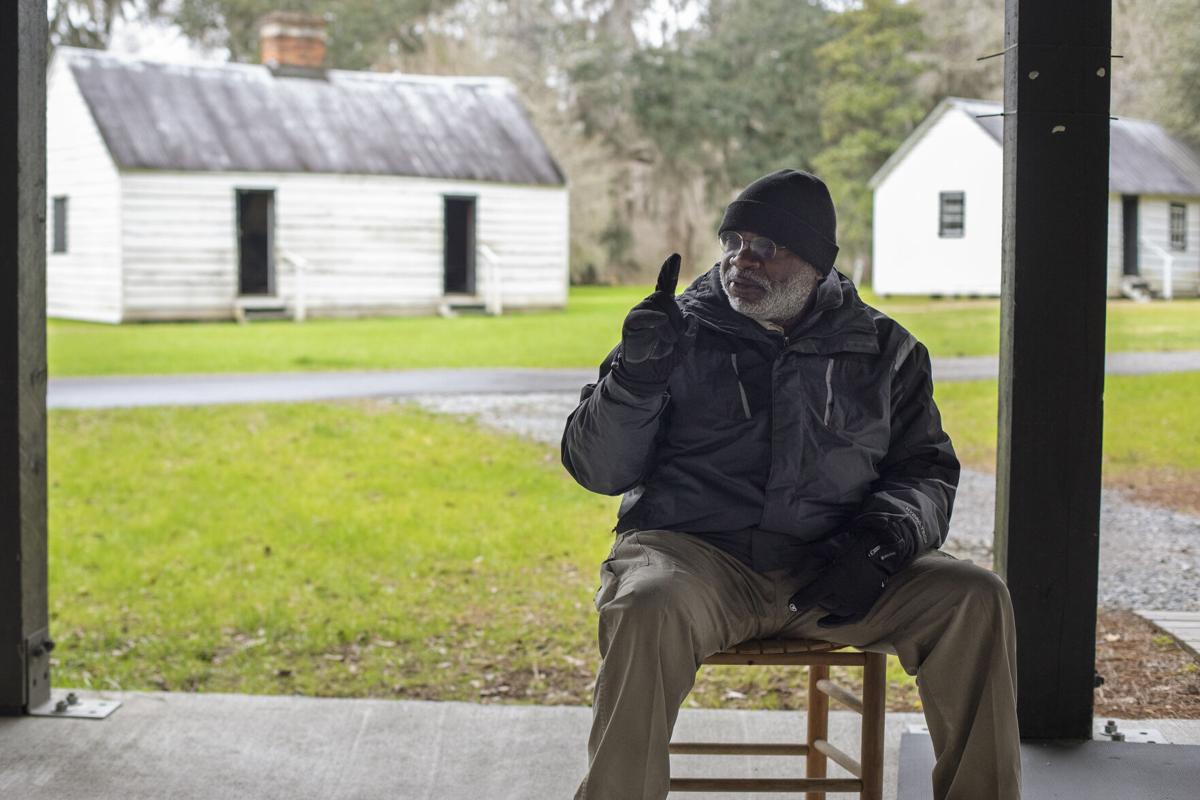 Joseph McGill leads the Slavery to Freedom tour at Magnolia Plantation and Gardens on Feb. 5, 2021. McGill told people on the tour that if they visit any other plantations and hear that the people who were enslaved were happy or treated well, they should ask for a refund because they were lied to. Lauren Petracca/Staff 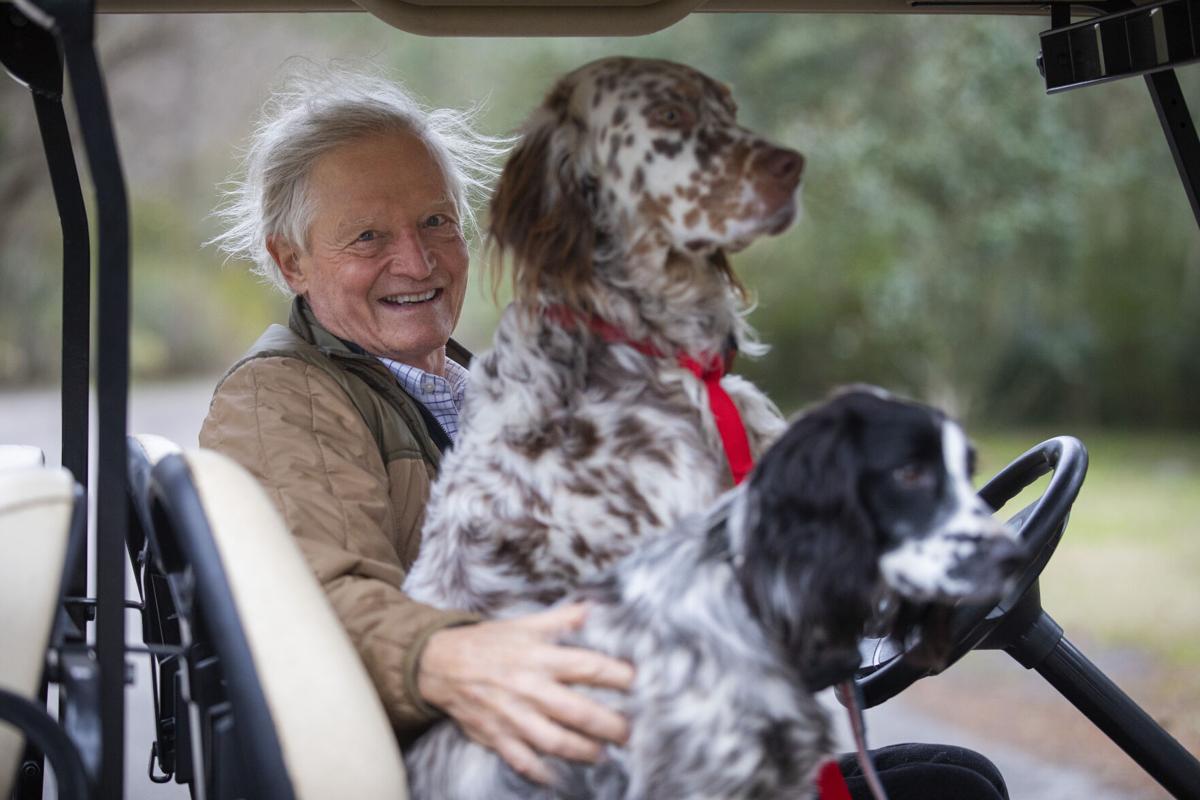 Drayton Hastie Jr. is pictured at Magnolia Plantation and Gardens with his dogs, Ace and Belle, on Feb. 5, 2021. Lauren Petracca/Staff 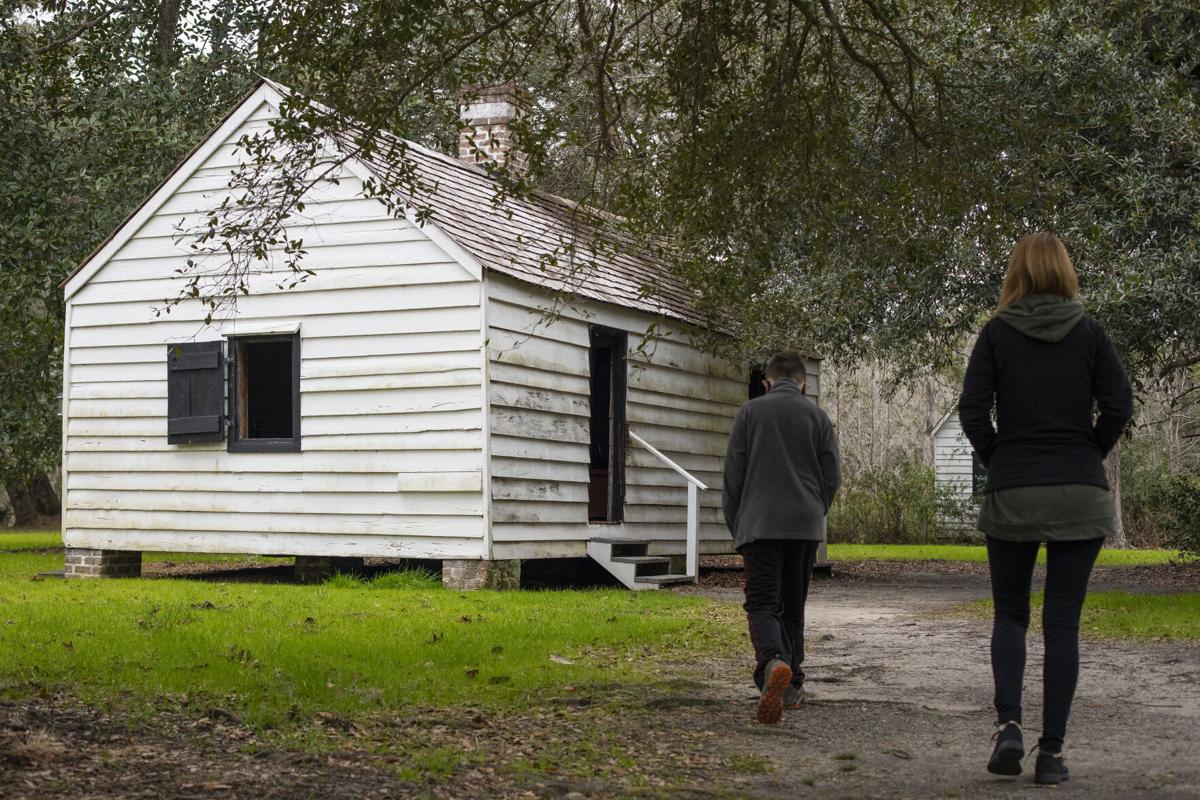 Courtney Westlake and Evan Westlake, 11, of Sherman, Ill., walk toward a slave cabin while on the Slavery to Freedom tour at Magnolia Plantation and Gardens on Feb. 5, 2021. Lauren Petracca/Staff 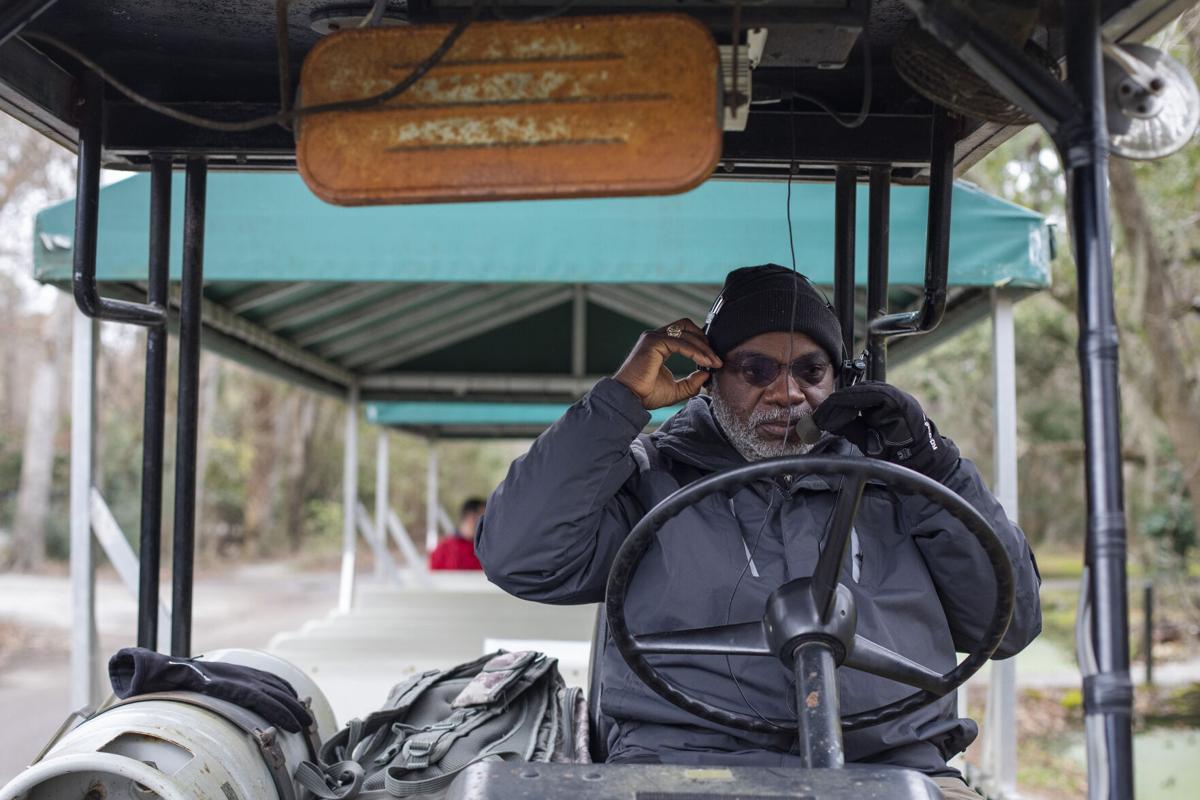 Joe McGill puts on his headset and microphone while leading the Slavery to Freedom tour at Magnolia Plantation and Gardens on Feb. 5, 2021. Lauren Petracca/Staff 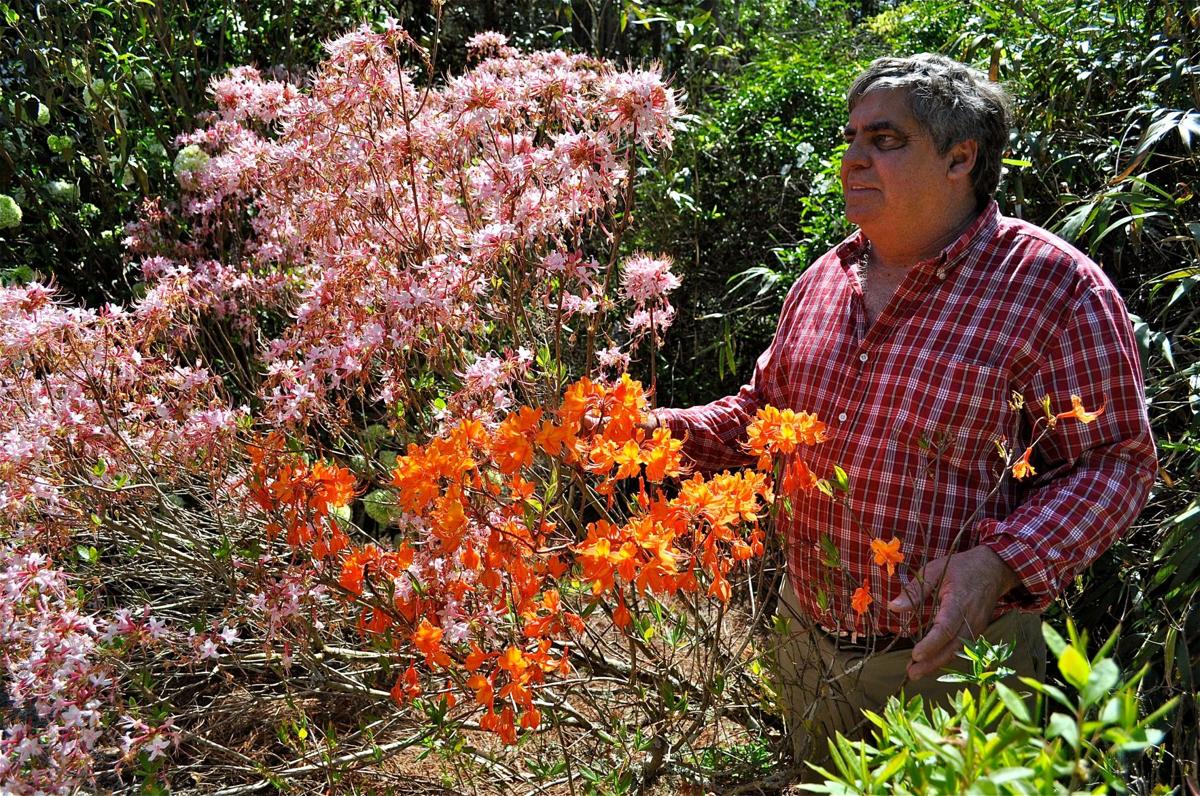 Tom Johnson, former executive director of Magnolia Plantation and Gardens, among the native azaleas, which play a central role in the historic site's romantic garden. File/Staff

After 14 years at the helm of Magnolia Plantation and Gardens, the Johnsons are back in Georgia.

In January, the executive director and operations manager of the historic site returned to their home state to settle into semi-retirement.

The privately owned site also ramped up its community engagement, forging relationships with the Make-A-Wish Foundation, Lowcountry Food Bank and other charities.

“When we came in, we had two directives,” Tom Johnson said. “Restore the gardens (and) never run away from the slavery issue again, deal with it head-on.”

Now, the Johnsons are pursuing other interests in Hamilton, Ga., a tiny community in the Appalachian foothills about 17 miles from Columbus. They live in a modest dwelling along Lake Harding they purchased years ago as a vacation home.

Magnolia Plantation is in flux. It’s in search of a new director, even as the COVID pandemic continues to cause financial and logistical challenges. It’s a transitional moment for the historic site, fraught with opportunity and risk. How it navigates the next several months could determine its course for the future.

Across the South and beyond, as Americans increasingly reckon with a history stained by slavery and segregation, historic sites like Magnolia are striving to figure out how to remain relevant, how to balance beauty and truth-telling, how to attract tourists and advance an honest narrative.

They are also trying to manage a cascade of suggestions and criticism, from all quarters. Some White tourists have complained about what they perceive as an overemphasis on slavery. Some Black visitors have argued that the cruelty of slavery is not emphasized enough. Others want such institutions to expand their historic interpretation to include aspects of Western colonialism, West African kingdoms before the advent of the transatlantic slave trade and Black contributions to agriculture, foodways, politics and art produced in slaveholding regions.

Magnolia and other old plantation sites, such as Middleton Place just to the west and Drayton Hall just to the east, want to strike an appropriate balance. Many of the White planters who managed these sites were historical figures themselves and worthy of acknowledgement. The Rev. John Grimke-Drayton revitalized Magnolia’s romantic gardens, which today are famous around the world for their camellias and azaleas.

Those gardens had fallen into disrepair by the time Tom Johnson arrived. His research, travel and enterprise resulted in a magnificent restoration — a garden replete with historically appropriate plants.

Historic authenticity — and honesty — is essential if Magnolia expects to be taken seriously, said Joseph McGill, history and culture coordinator at Magnolia and founder of the Slave Dwelling Project.

“But that’s not enough,” McGill said. “That story shouldn’t be isolated. People shouldn’t have to make a choice in hearing that part of the story.”

'Charleston History Before 1945,' where debate on Facebook is respectful and facts rule

He incubated his Slave Dwelling Project at Magnolia, with support from the Johnsons, owner Drayton Hastie and the board. What began as a night spent in a slave cabin turned into an ongoing effort to highlight the experiences of enslaved people at plantations across the South, and at other sites associated with this history.

Now, McGill said, Magnolia should find ways to acknowledge the Black experience even for those just strolling the gardens or admiring views of the Audubon Swamp or Ashley River. Doing so will help to keep the tourist site relevant as the country continues its racial reckoning.

“We have neighbors to the east and west moving forward,” he noted, referring to Drayton Hall Plantation and Middleton Place. “That could pressure Magnolia. In 2022, the new (International African American Museum) is going to open. If you’re not on the list (of sites) that the museum can recommend people to go, then you’re not in a good place. I certainly make that point every chance I get.”

Museum officials have expressed their intention to collaborate with local institutions and historic places. The goal is to present a far more encompassing history than the romanticized version that was long a mainstay of the local tourist experience, and to highlight the depth and breadth of that history in the Lowcountry.

Under scrutiny, historic Lowcountry plantations consider their role in dialogue on race

Tracey Todd, CEO of Middleton Place Foundation, said the two rice plantations are intrinsically connected. They share similar histories and both now strive to educate visitors. And the families that once operated them — the Draytons and Middletons — often interacted, beginning in the 18th century.

When Charles Duell inherited Middleton Place in 1969, he turned to Norwood Hastie (Drayton Hastie’s uncle) for advice, Todd said. Hastie was a mentor who helped Duell find his footing.

The connections among African Americans whose ancestors lived and worked on the plantations along the Ashley River, during and after slavery, also are extensive, Todd said.

“Ashley River was a community,” he said. “I think the sites today should be a community.”

During a period of flux and uncertainty in the tourism market, because of the ongoing dialog on race and because of the coronavirus pandemic, it’s more important than ever for such organizations to forge compatible missions and partnerships, he said.

“We do that better if we’re all working together and we all have similar educational outlooks,” Todd said.

A 2020 tourism survey conducted by the Gullah Geechee Cultural Heritage Corridor revealed that around 20 percent of prospective visitors to the Lowcountry said African American culture is an important factor in their choice of destination and a motivation for travel.

Unlike McLeod Plantation on James Island, which opened as a museum in 2015 and focuses exclusively on the history of slavery, or the Whitney Plantation in Louisiana, which opened in 2014 and similarly focuses on the experiences of enslaved people, Magnolia Plantation traces its origins as a tourist attraction to the 1870s. Until relatively recently, the history of slavery was deemphasized in favor of promoting the natural beauty of the gardens.

The Gullah Geechee Cultural Heritage Corridor report noted that about a third of those surveyed knew about Magnolia, compared with an average of 23 percent of people familiar with “Gullah Geechee destinations” in general.

Magnolia is one of three historic plantation sites in the Charleston area that functions as a museum and also a wedding venue. Boone Hall in Mount Pleasant has also made weddings a key part of its business model. Middleton Place hosts weddings, too, but caps how many it allows in a year. Drayton Hall and the Charleston County Parks-managed McLeod Plantation allowed weddings in the past but have since changed their policies.

The revenue generated by these private events helps to fund general operations and historic interpretation. Nevertheless, some have criticized these sites for capitalizing on a painful history.

'Part of the community'

Before he came to Magnolia, Johnson was landscape manager at the Jimmy Carter Presidential Library in Atlanta. Mary Ann Johnson was its florist. His keenest interest then was growing native plants. At Magnolia, he became obsessed with camellias — hunting for historic species and growing some himself in a large greenhouse on the grounds.

He resisted Hastie’s offers at first.

“I turned the job down for two years,” he recalled. “I’m a Georgia boy. I thought South Carolina was a foreign country.”

But he couldn’t resist Hastie’s call for help, and he quickly fell in love with Magnolia Plantation’s spectacular landscape. He knew that restoring the gardens would consume nearly all of his time, but he was up for the challenge, he said. He was the first long-term director of the business who was not part of the family that has controlled the property for generations.

After a while, the Gardens of Versailles in France approved Magnolia as a site abroad where its interns could work. And the International Camellia Society named Magnolia an “International Garden of Excellence.”

Johnson met famous gardeners from around the world. He traveled through parts of Europe, to Barbados, to Cuba.

He got to work with Herb Frazier, who was in charge of marketing and communications, with McGill, who bolstered historical interpretation, and with Kirk Brown, national outreach coordinator for Magnolia and former president of the Garden Writers Association.

He channeled the Rev. John Grimke-Drayton, who inherited the property in the 1840s, devoted himself to improving the gardens and remained active in a ministry that catered to working people.

Johnson led campaigns to collect goods for the Lowcountry Food Bank, donate blood to the Red Cross, and find homes for shelter dogs.

“We became a vibrant part of the community,” he said.

In the months before COVID hit, the Johnsons organized “Lights of Magnolia” in partnership with the Zigong Lantern Group in China. It was a risky maneuver but worth it, Johnson said. The site attracted many visitors through the winter — and enough income to cover operational costs. Normally, the organization would tap into reserve funds to get through the leaner winter months. Not this time.

“I saw Magnolia through three hurricanes, the hundred-year flood, then the pandemic,” Johnson said. “When we opened back up, we were back in the black every month.”

Drayton Hastie, 78, said he’s eager to get past the pandemic and find a new director. The combination of revenue declines and repair-and-maintenance expenditures has added unwelcomed financial pressure to the organization.

“We need Charleston to get back to being Charleston so we can have our normal tourism,” he said. “Tom was wonderful with local initiatives. Whoever we get will need to be good with that.”

Hastie also said he and the board were open to more and better historical interpretation. And it’s essential that the site, which has garnered awards for its spectacular gardens, keep the flora looking its best.

“We want to stay in the limelight that Tom got us into,” he said. But it could take several months before the operation is fully staffed and forging its way into the future.

At their cottage by Lake Harding, the Johnsons are settled in. But it’s hard for Tom to keep his hands clean. A friend hired him to grow native plants and gave him use of a large greenhouse.

The Johnsons are part of the Rosalynn Carter Butterfly Trail, whose purpose is to increase pollinator habitat. And they are thinking about what's most important to them in life after bouts with the COVID-19 virus.

“It’s going to be exciting spending the rest of my life doing what I wanted to do when I started my career,” Johnson said.

Emily Williams contributed to this report.