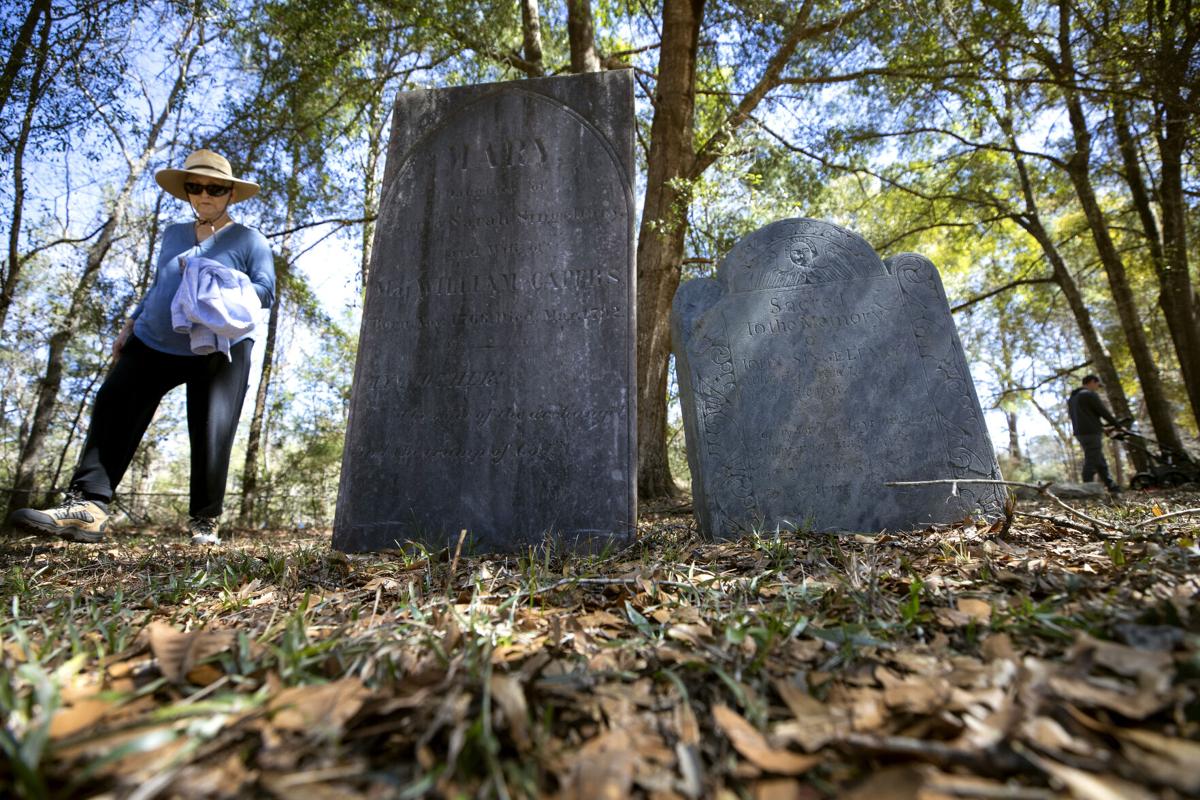 MaeRe Skinner on March 10 walks past the graves of Mary Singletary Capers and Mary's father, John Singletary, who are buried in McDowell Cemetery off Clements Ferry Road in Cainhoy. Most of Skinner's ancestors are buried here. Just outside the fence is an African American burial ground. Grace Beahm Alford/Staff 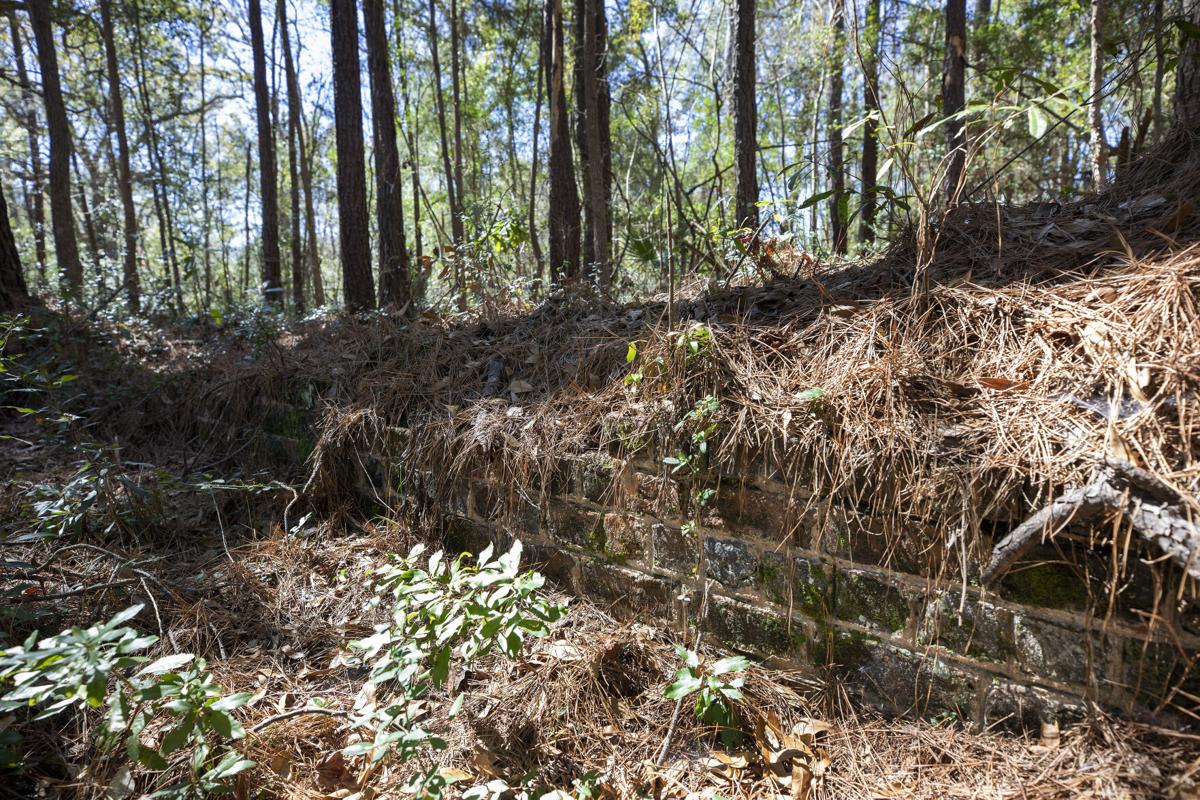 The foundation footprint of the Cainhoy Meeting House can be seen March 10 in  McDowell Cemetery, off Clements Ferry Road. Grace Beahm Alford/Staff 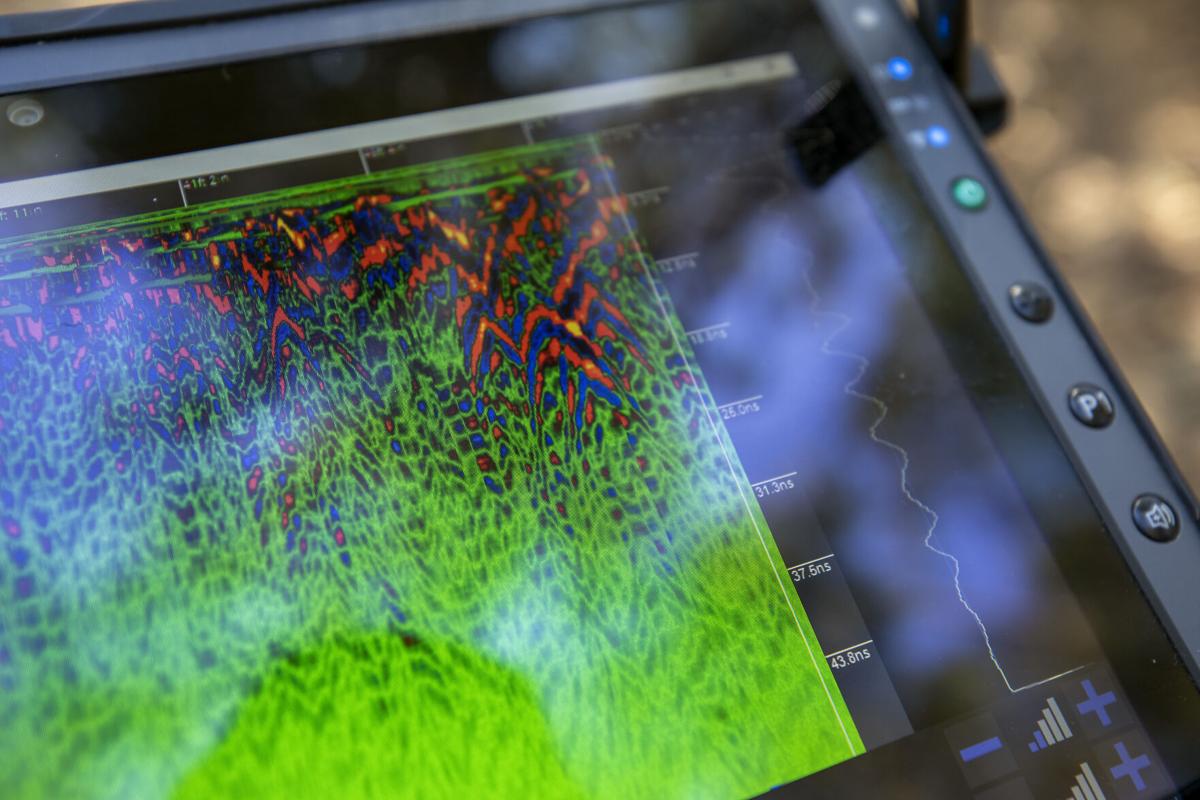 Marks on the screen show an object nearly 5 feet below the surface on the site of the Cainhoy Meeting House off Clements Ferry Road. Ground-penetrating radar detects underground anomalies that could indicate the presence of graves. Grace Beahm Alford/Staff 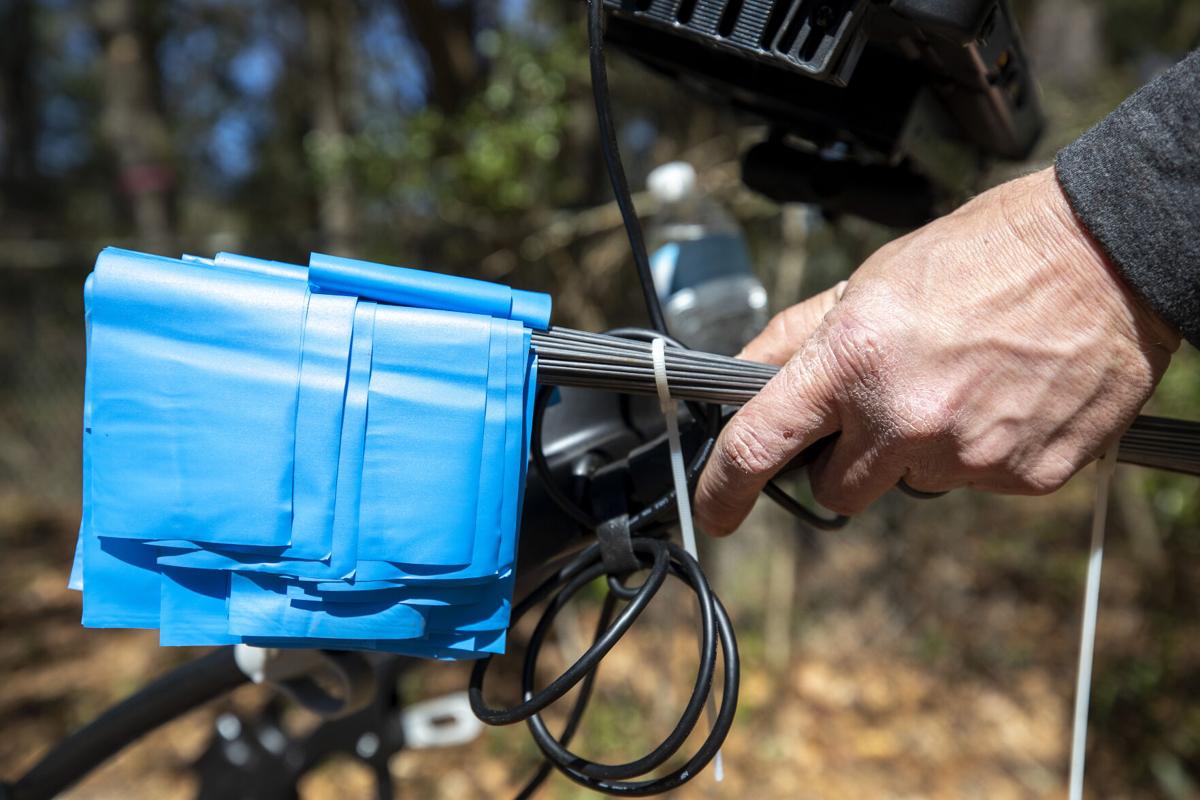 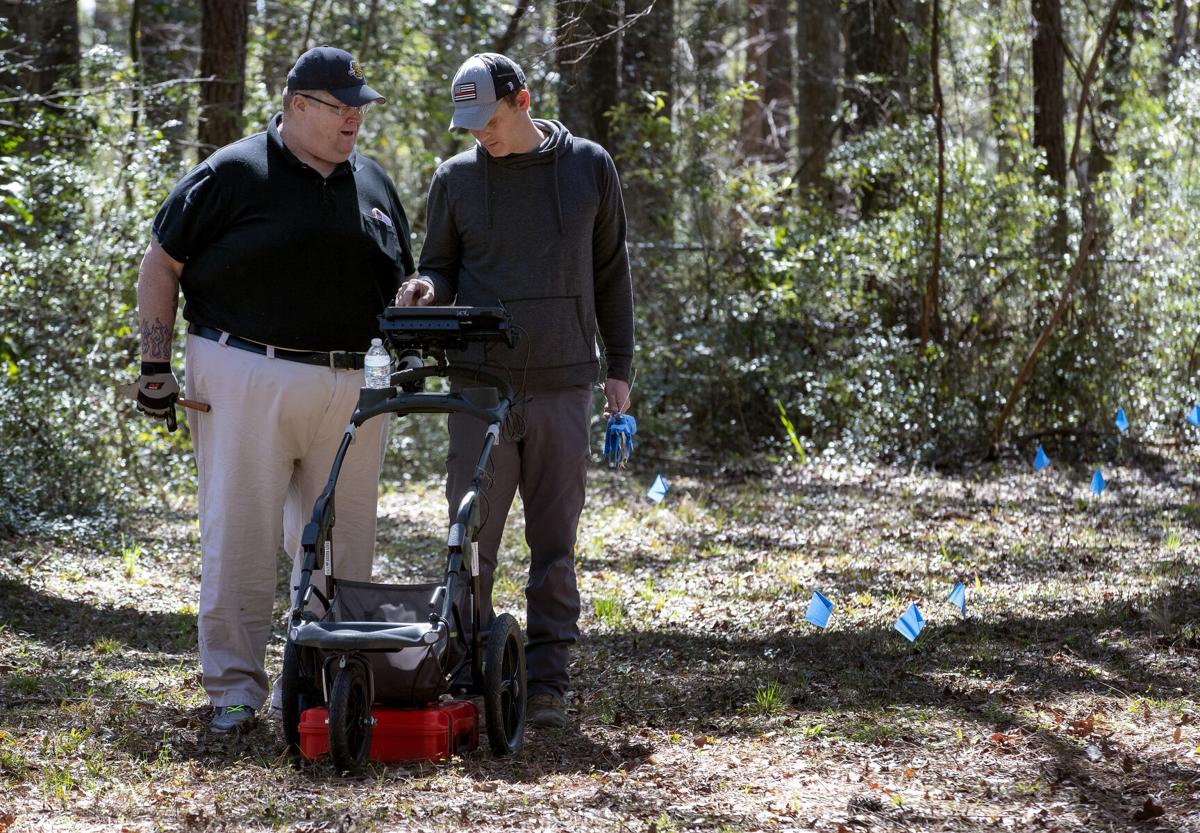 Grant Mishoe, of The Gullah Society, and Mat Lomas use ground-penetrating radar on March 10, 2021, to find possible unmarked graves at the site of a White cemetery and Black burial ground in Cainhoy. Grace Beahm Alford/Staff 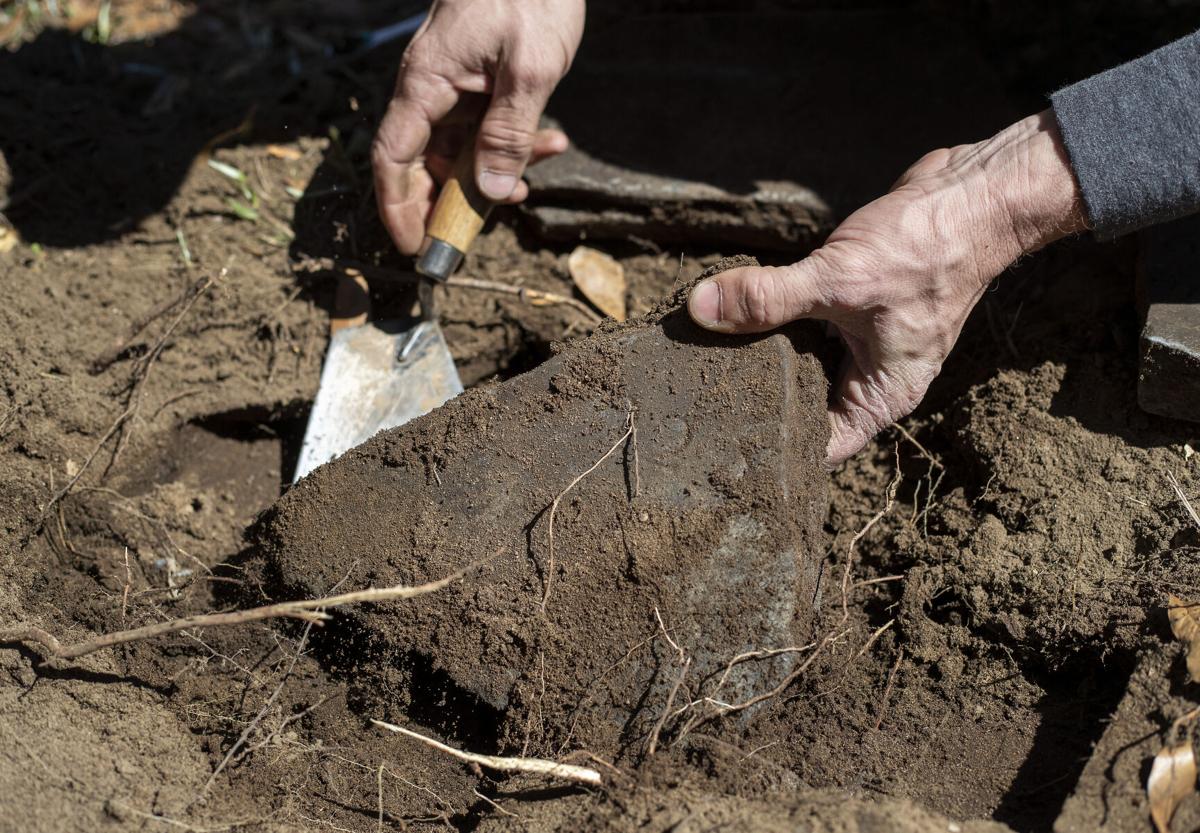 Mat Lomas unearths a buried gravestone on March 10, 2021, at McDowell Cemetery in Cainhoy. As many as 50 people are buried here. Several known graves containing the remains of African Americans have been identified just outside the fence, and the total number could be significantly higher. Grace Beahm Alford/Staff 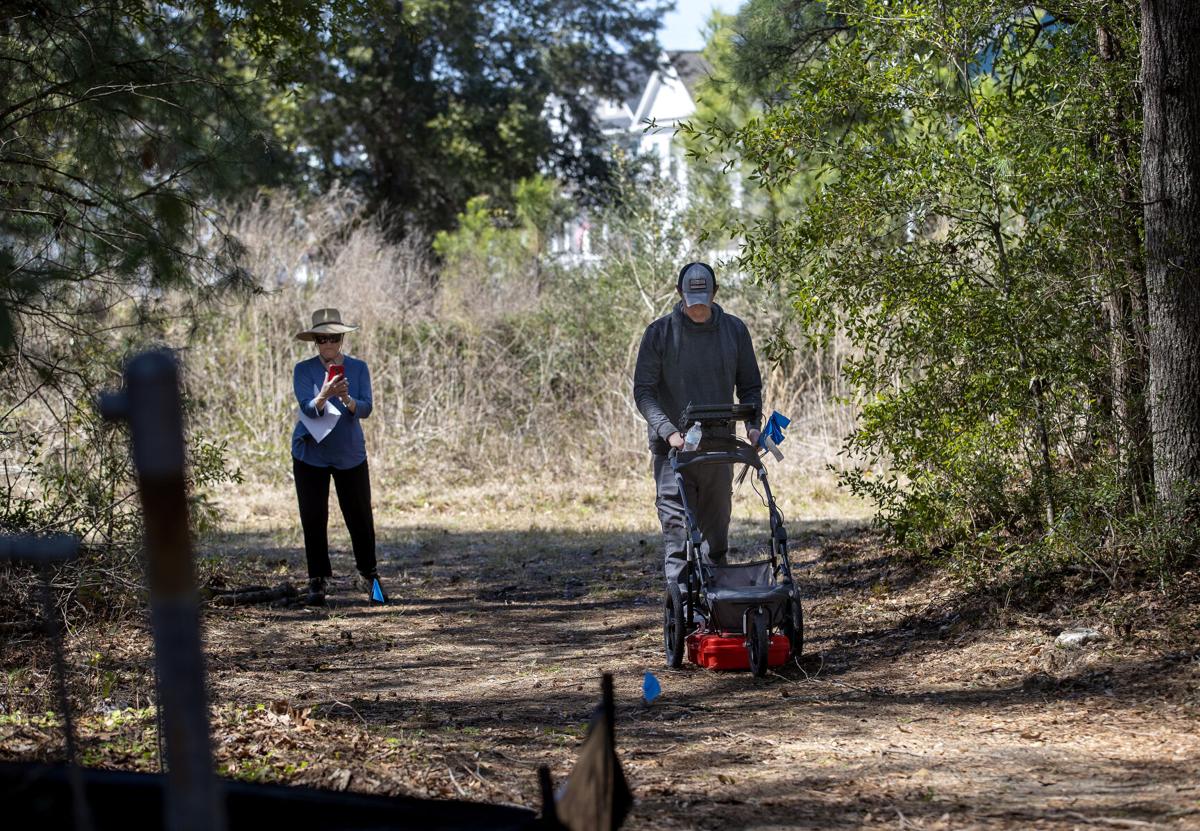 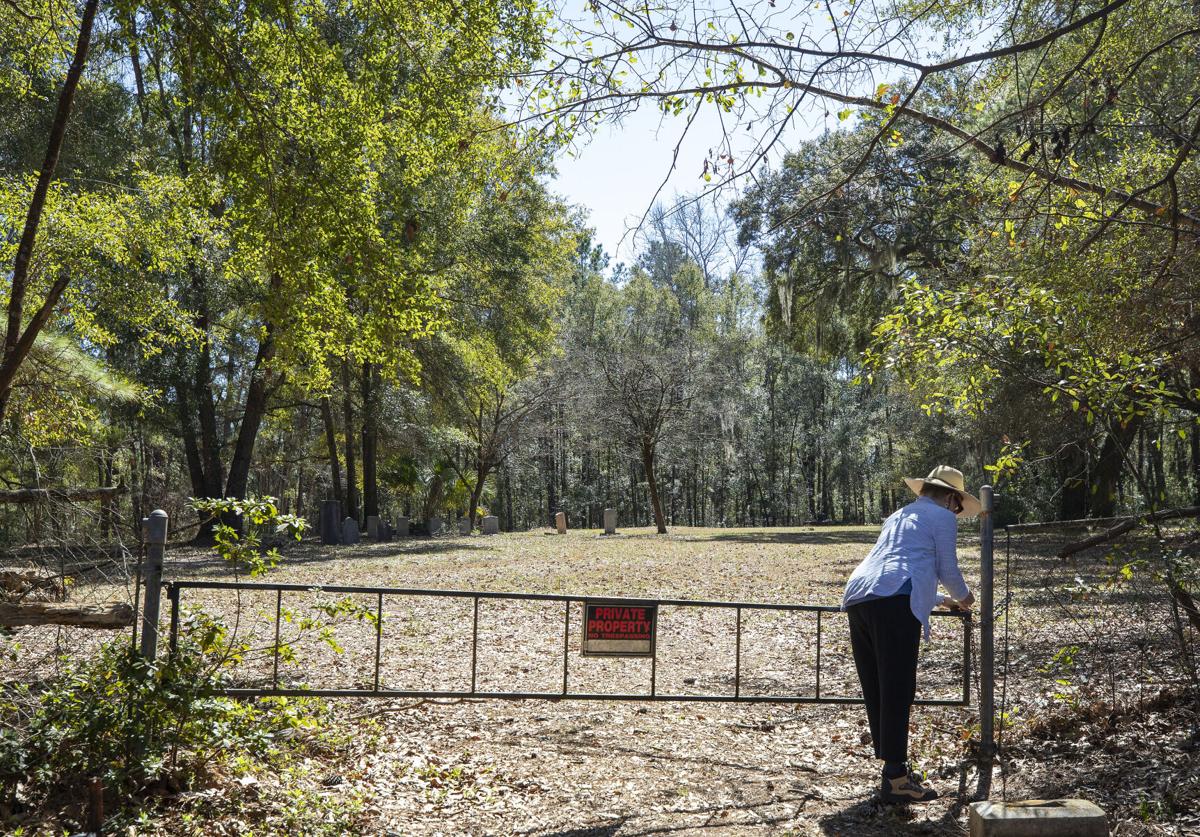 MaeRe Skinner opens the gate to McDowell Cemetery on March 10, 2021. Beyond the cemetery fence to the left is an African American burial ground. Grace Beahm Alford/Staff 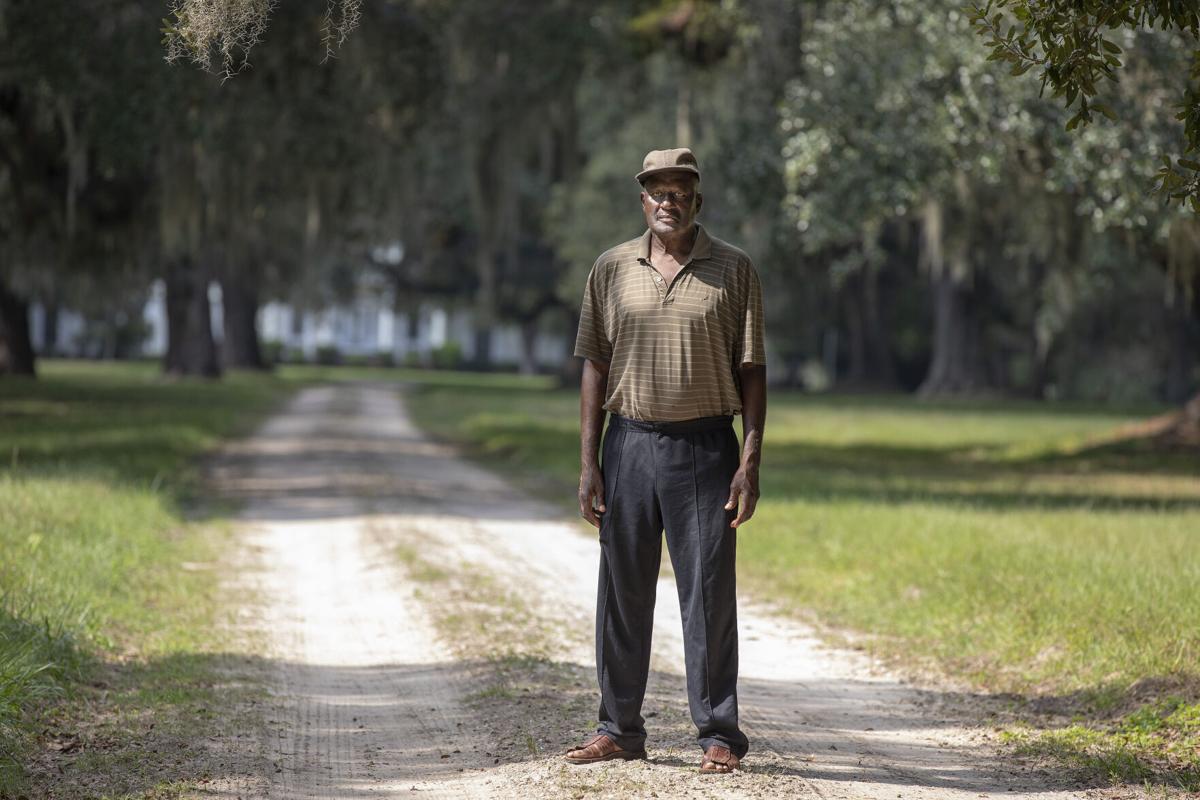 Fred Lincoln lives in the Jack Primus community of Cainhoy. Lincoln and other residents want to protect the African American burial ground where a new subdivision is being built. File/Lauren Petracca/Staff

CAINHOY — This place along the Wando River once was remote. Millennia past, it was inhabited by native tribes. In the late 1600s, it was colonized by Europeans. In the early 1700s, Presbyterians called this area home and established their Dissenter Church.

The McDowell Cemetery, located on a bluff overlooking a salt marsh, included a Meeting House that was converted into a hospital during the Revolutionary War. By the early 1800s, Methodists had settled the area. Enslaved laborers worked on nearby plantations.

An active White cemetery controlled by the Cainhoy Methodist Church and Cemetery "Old Ruins" Corp. and an adjacent Black burial grounds located on private property are the focus of community leaders seeking to preserve and improve the site, and ensure easy public access to it. 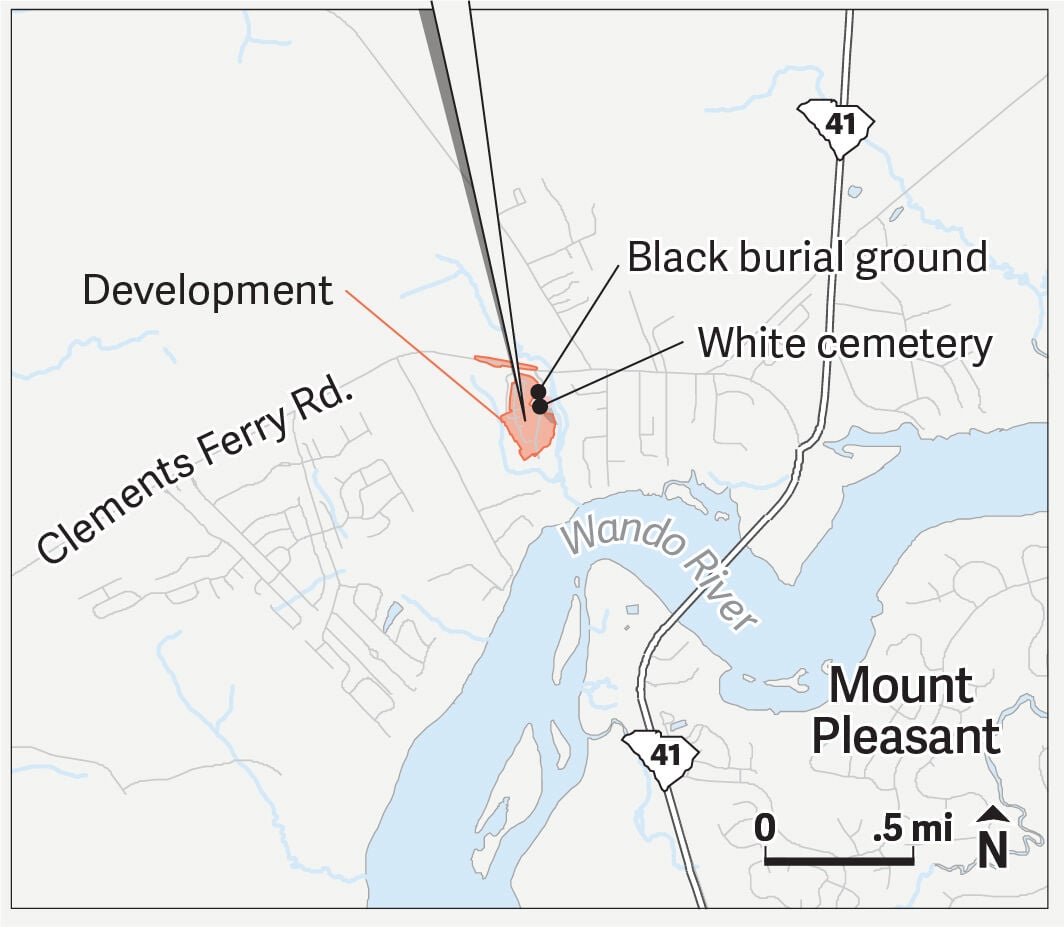 After the Civil War, many of Cainhoy’s formerly enslaved people established the Jack Primus community. They buried their loved ones on the bluff adjacent to the McDowell Cemetery.

For 150 years, the dead lay undisturbed. But the land nearby is now transforming into a new subdivision, Oak Bluff, and the development threatens to erase part of the old dirt road that leads to the cemetery and possibly impinge on yet-to-be-discovered remains.

Recent surveys of the property conducted on behalf of local residents hoping to protect the graveyards have identified several visible African American gravesites just outside the fence delineating McDowell Cemetery. Dozens of below-ground “anomalies” detected by ground-penetrating radar suggest additional graves, as many as 40 or so, according to Grant Mishoe, a historical researcher for The Gullah Society.

While the White graves inside the defined cemetery are part of a property now deeded to the Cainhoy Methodist Church and Cemetery “Old Ruins” Corp., the Black graves are located on private property that now belongs to Crescent Homes.

What’s more, the dirt access road leading from Clements Ferry Road to the graveyard is identified in the cemetery property deed as under easement, but its legal status was not known by the developer before the neighborhood was permitted and designed. Now a few houses to be built during Phase 1C could interfere with the road unless last-minute changes are made.

Complicating matters is the possibility that some African American graves also might be located very near the dirt road and by the current entrance to the White cemetery where the road terminates. Originally, the path continued past the cemetery and around the old Meeting House, leading into the graveyard from the south, according to MaeRe Chandler Skinner, chairwoman of the Old Ruins Corp.

A 2015 archeological study by Brockington and Associates, done for the previous property owner, did reveal the African American burial ground but not its potential scale or boundaries.

Skinner and several other community members, including Black leaders in Cainhoy, are hoping to merge the two burial grounds in order to better manage and maintain the gravesites. They are petitioning the developer to make changes to well-established and approved plans in order to safeguard the remains of African Americans buried outside the fence.

The Preservation Society of Charleston has asked the S.C. Department of Health and Environmental Control, which has jurisdiction over burial grounds, to intervene. In a March 10 letter, Preservation Society Director of Advocacy Brian Turner wrote: "We believe there to be a strong likelihood that the current owner will encounter this burial ground should it receive permits for excavation and grading of Phase 1C."

Bob Pickard, vice president of land development for Oak Bluff Development LLC, a subsidiary of Crescent Homes, wrote in an email that his company carefully followed permitting guidelines spelled out by the city of Charleston and DHEC.

“The permitting process took over three years and included an extensive archeological study of the site,” Pickard wrote. “This study was incorporated into the site design to ensure there were no adverse impacts to sensitive areas, including burial sites. The plans were reviewed and approved by multiple agencies, and their relevant departments, including the state Historical Preservation Office.”

In a letter to Crescent Homes in September, Skinner asked for the road to be left “as it is” to ensure easy access. She requested that a professional archaeologist use ground-penetrating radar “to locate the many African American graves that we know are just north of the fenced-in area before any homes are planned on or near that section of the Cemetery.”

Citing a 2015 agreement between the developer and the corporation, she also asked for a new fence to encompass not only the White cemetery but also the Black burial ground.

Skinner and other local residents, including African Americans living in the Jack Primus community such as Fred Lincoln, are concerned about getting in and out, stormwater runoff, vandalism, safety, funeral parking and processions, and other issues that have not been adequately addressed, according to the letter.

“We need DHEC to intervene so we can investigate the private property (where Black graves are located),” Lincoln said.

Excavation equipment, hearses and other vehicles need to be able to move in and out of the cemetery area, said Lincoln and Skinner. Should they do so through the new residential neighborhood?

The disputes over the property could be because it is subject to multiple jurisdictions. It's located in Berkeley County but part of the city of Charleston. State agencies such as the Historical Preservation Office and DHEC assess such sites, determine their environmental and historical significance and oversee any impacts to burial grounds.

Even the federal government could get involved should the Old Ruins Corp. or others petition for the site’s inclusion on the National Register of Historic Places, something surveyor Brockington and Associates did not rule out.

Skinner said she’s been trying to get help from the city of Charleston for three years. City officials defer to DHEC whenever human remains are involved in any dispute.

“Oak Bluff Development, LLC has been a good faith partner in this process and stands by its commitment to develop this site responsibly and in accordance with applicable regulations,” Pickard wrote in his statement.

This is hardly the first time new development has pushed up against a historic site. On the Charleston peninsula and beyond, many old burial grounds have been lost to time, change and real estate development. Others survive, though they are neglected or forgotten.

Ade Ofunniyin, founder of The Gullah Society, dies at 67

The Gullah Society has identified dozens of Black burial grounds up and down the peninsula. Some lie beneath parking lots and buildings, others are hidden in empty lots. And discoveries continue. In 2013, the remains of 36 Africans were found during renovation of the Gaillard Center. That’s why advocates want the city to hire a full-time archeologist who can oversee field investigations and research as part of any new development project.

And that’s why lawmakers are considering a bill that would authorize the Department of the Interior to conduct a comprehensive study of Black burial grounds nationwide, paving the way for Congress to establish the African American Burial Grounds Network. The project, if enacted, would enable historians, archaeologists and preservationists to coordinate efforts, create a nationwide database, receive grant funding and more.

Today, graveyards in rural parts of the state are increasingly at risk as suburbs and exurbs spread. Development on Daniel Island and upper Mount Pleasant now is reaching Cainhoy and nearby Wando, raising tensions among local residents.

Widening projects for Clements Ferry Road and S.C. Highway 41 are underway in response to growth. What was once considered far away from the urban center is quickly becoming within reach.

Michael Trinkley, director of the Chicora Foundation in Columbia, said it’s typical to find a scenario like the one in Cainhoy, with African American burial plots located outside the boundaries of a larger, better-maintained White cemetery.

The Black graves adjacent to McDowell Cemetery are located within a wooded thicket, while the fenced-in White graveyard is mostly clear of trees and foliage. African Americans began using this area for burials in the late 1800s, according to the archaeological studies.

When such discoveries are made late in the process, it can mean that project managers end up with an unanticipated bill to pay. It can cost up to about $2,500 to responsibly remove and relocate a single grave, Trinkley said.

“I don’t think removal ought to be the first option," he said. “There ought to be a sense of finality when someone has died and is buried. They ought to, in fact, rest in peace. I’m not inclined to find economic concerns to be a good reason to remove a grave.”

The property owner also must allow access to family members and descendants, or their authorized agent, to cemetery plot owners, genealogy researchers and anyone participating in a burial or maintaining the site.

When investigating a site, no single tool is perfect. Ground-penetrating radar, for example, can be thrown off by tree roots, Trinkley said. That’s why shovel tests and the use of a penetrometer, which measures ground compression, can help.

The best approach for developers, he said, is to include funding for archaeological research in the planning budget, and to ensure that sufficient research is conducted before laying out a new neighborhood or determining the position of a particular building structure.

Lincoln said he is eager to protect the African American burial ground by combining it with the White one, and by determining conclusively how many graves are located in the area slated for homes, yards and driveways. If the number is low, then surely a compromise can be reached, he said.

Lincoln’s cousin Ulysses Vanderhorst said his parents and grandparents are buried at the site.

Both men said encroaching development is placing stress on their community. Black property owners have been approached by people seeking to buy their land, but most are trying hard to hang on, they said.

Owning property whose value is appreciating with each passing day means these families potentially can generate wealth and pass it on to younger generations, they said. But it’s a struggle that’s intensifying.