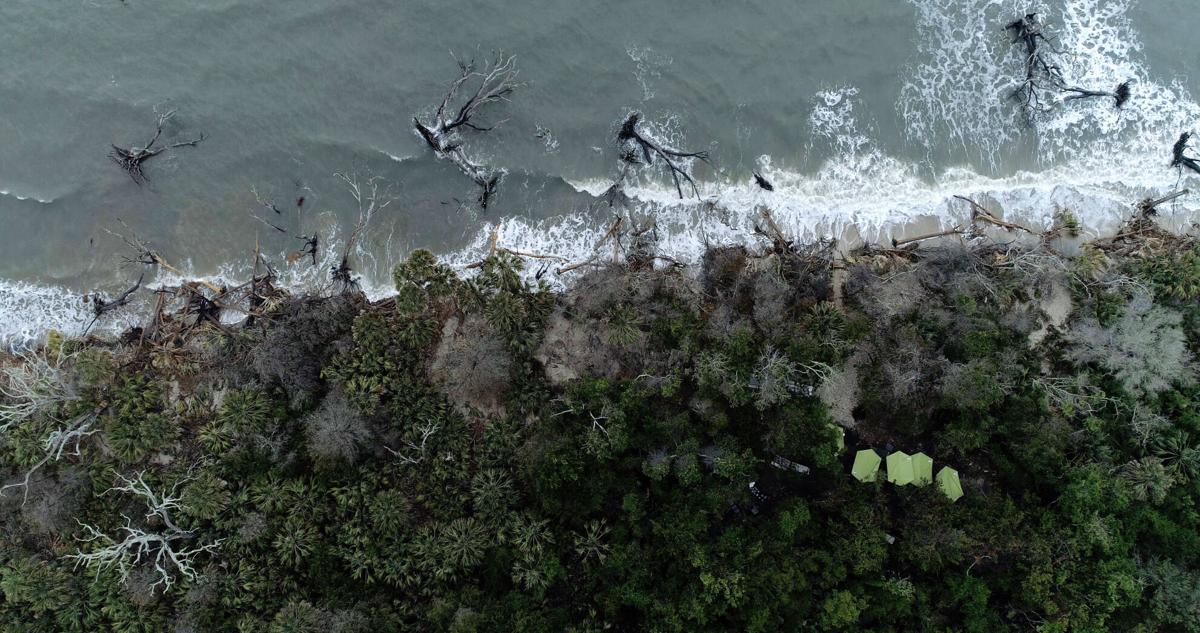 Pockoy Island, photographed during the May 2018 field season. Erosion is threatening the shell middens found on the island. Jamie Koelker/SCDNR/Provided 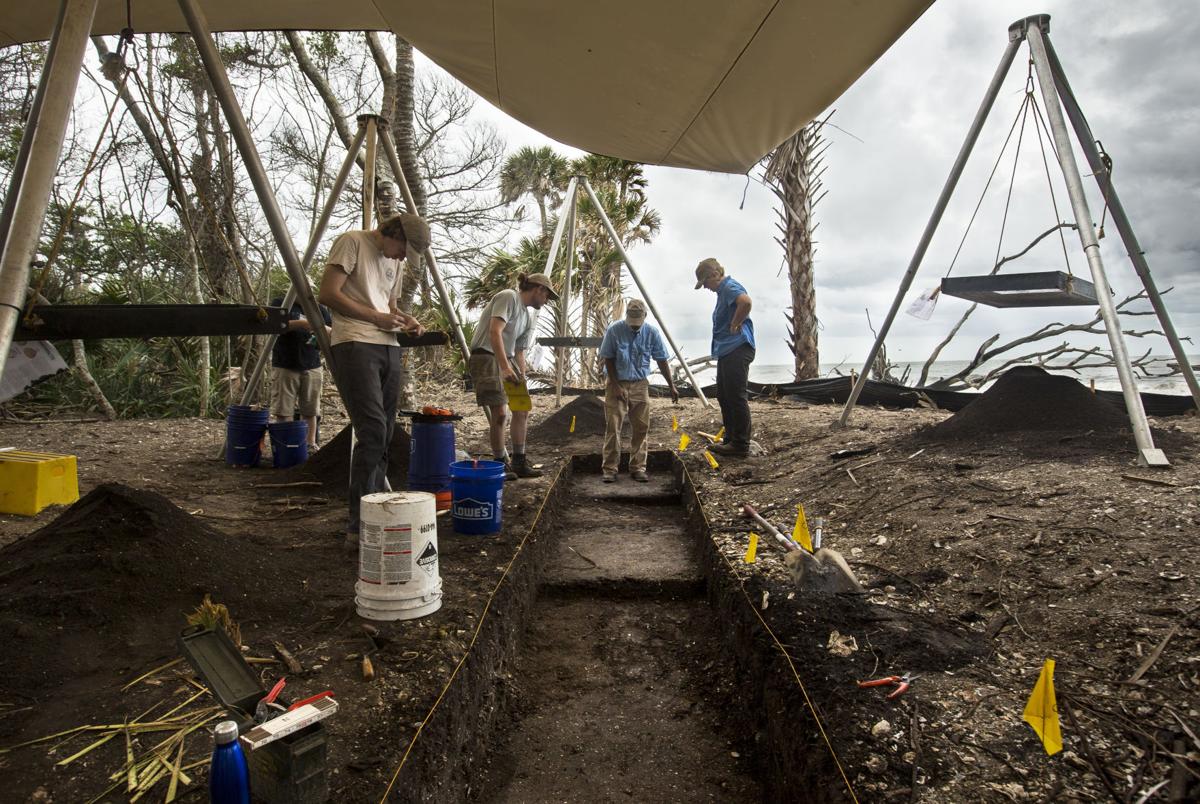 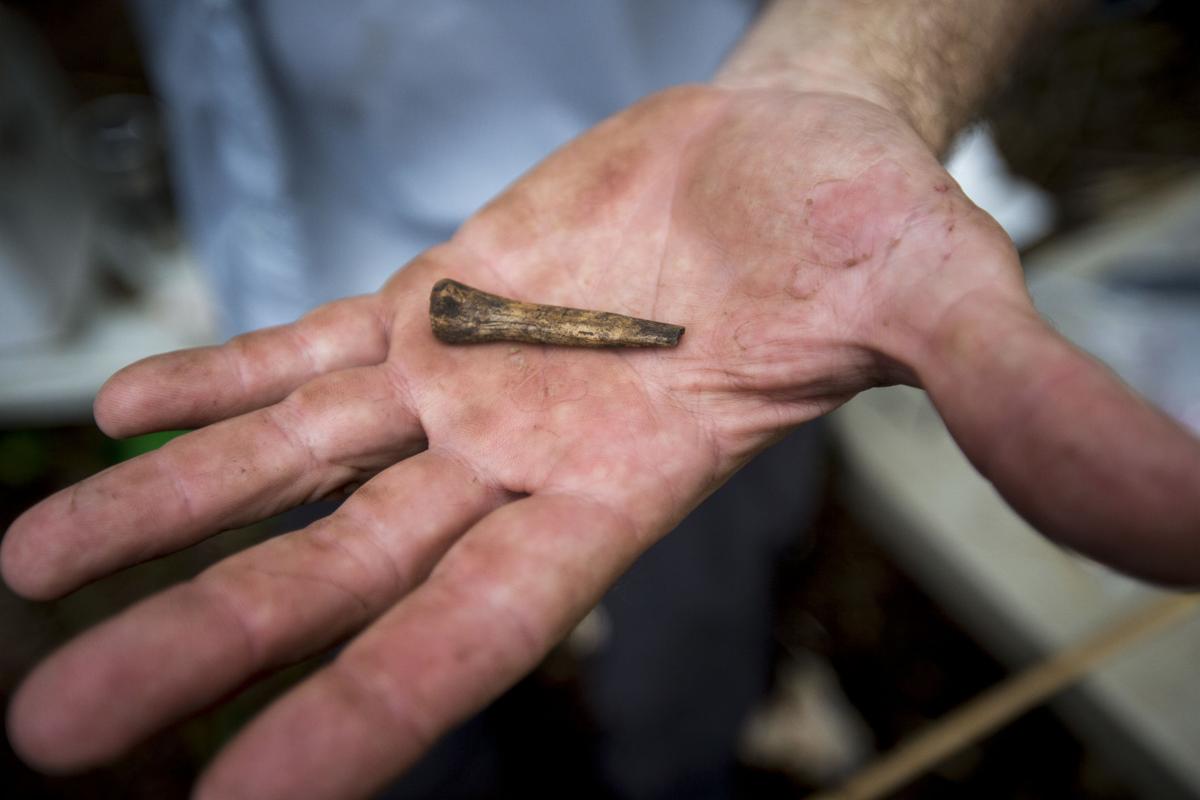 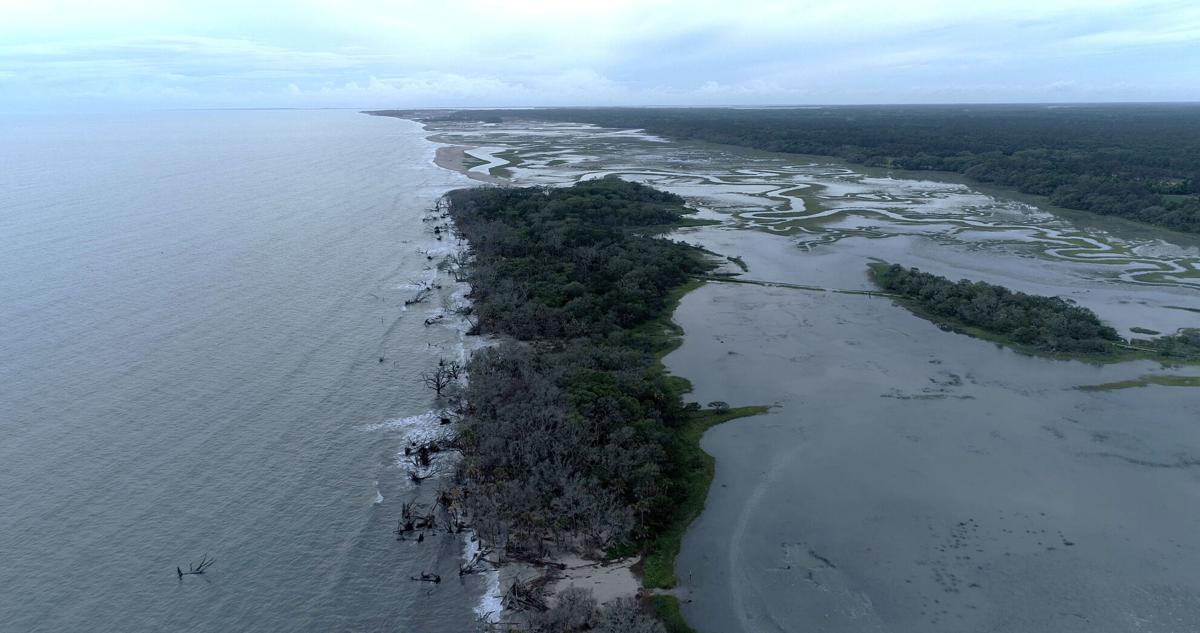 Erosion can be seen on both sides of Pockoy Island in May 2018. Jamie Koelker/SCDNR/Provided 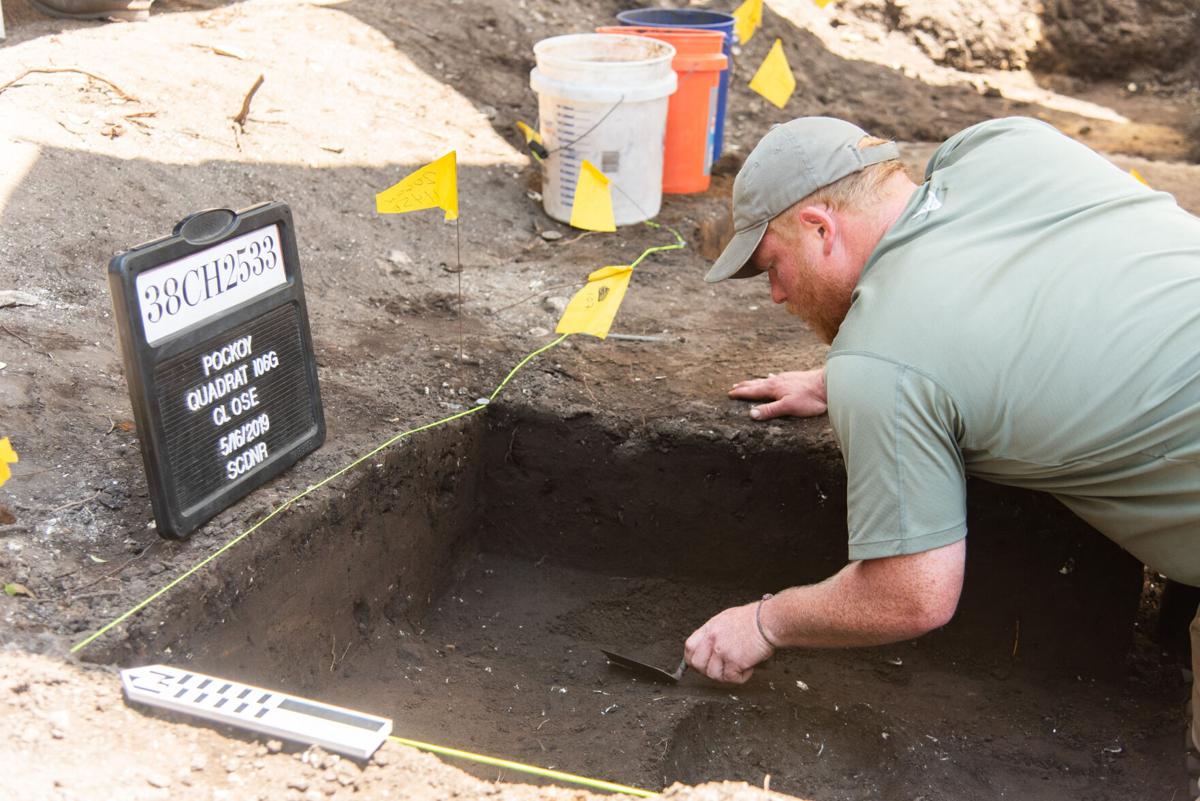 SCDNR archaeologist Will Britz cleaning a unit at Pockoy Island Shell Ring 1 during the May 2019 field season. Taylor Mai/SCDNR/Provided

Pockoy Island, photographed during the May 2018 field season. Erosion is threatening the shell middens found on the island. Jamie Koelker/SCDNR/Provided

SCDNR archaeologist Will Britz cleaning a unit at Pockoy Island Shell Ring 1 during the May 2019 field season. Taylor Mai/SCDNR/Provided

POCKOY ISLAND — Take a football field, reshape it from a rectangle into a circle, and you’ve got something about the same size as an ancient coastal shell midden.

Two of these middens, about 4,300 years old, can be found on Pockoy Island, which is part of the Botany Bay Plantation Heritage Preserve. They are unusually low to the ground, invisible really.

The island, part of the Botany Bay Plantation Heritage Preserve, includes shell middens that archaeologists estimated to be more than 4,000 years old. Shell middens are primarily a collection of discarded oyster shells.

“These we think were beaten down from farming during plantation era,” said Michael Russo, acting director of the Southeast Archeological Center in Tallahassee, Fla., who has lent his expertise on shell rings to the Pockoy Island project and others in South Carolina.

In recent decades, erosion of the sandy maritime terrain has accelerated because of climate change, and this has lent some urgency to the effort.

The S.C. Department of Natural Resources has sent its archaeologists and teams of volunteers to the site to conduct research while the shell circles are still accessible. This fall, DNR received more than $650,000 from the Hurricanes Harvey, Irma, and Maria Emergency Supplemental Historic Preservation Fund to help with three ongoing projects at two Lowcountry locations that share a common denominator: they all are imperiled by the impacts of global warming.

These emergency funds were awarded by the S.C. Department of Archives and History, which manages the funds for the National Park Service:

The coronavirus pandemic has put work on hold, but the research effort must be finished and a report submitted by the end of September 2022, said Meg Gaillard, Heritage Trust archaeologist with DNR.

Excavation work started in July 2017 on the Pockoy Island site. The shell rings are from the late Archaic period and are roughly contemporaries with the first great pyramid of Egypt and Stonehenge in England.

Most shell middens are made of discarded oyster shells, but one finds cockles, periwinkles and arcs mixed in, Gaillard said. The Pockoy Island structures were discovered in 2016, after Hurricane Matthew tore through, using LiDAR — light detection and ranging technology that measures laser reflections.

It’s likely that the midden itself was part of a larger complex, and archaeological digs raise intriguing questions about their use. One thing seems certain: these were more than mere garbage dumps.

And now the pressure is on to discover as much as possible as quickly as possible, Gaillard said.

“Since it’s a Heritage-at-Risk site, we’re doing rapid large-scale excavations, much more than we would at other sites,” she said. “We’re going to lose it to the Atlantic Ocean, there’s no way around that.”

Russo said it had been assumed that the middens were created by people visiting the site once in a while to eat. Kind of like a big beach party. But that doesn’t explain why these structures are circular.

Fifteen years ago, when Russo began investigating shell rings, he was almost singularly focused on this question. In the years since, he and other archaeologists have rejected old theories (such as flood control, fresh water collection or wartime fortification) and come up with various new, more plausible ideas.

In fact, the middens once were located in the midst of the maritime forest, on relatively high ground. It’s possible people lived nearby, or held rituals there, or created a marketplace or played games. It’s easier to eat by the ocean: food is more plentiful. So perhaps these ancient communities gravitated to the sandy sea islands for this reason.

Maybe the shell circles were akin to stadiums, with participants occupying the inside space and spectators gathered around the perimeter.

Why oyster shells? Because oysters were ubiquitous and easy to gather. They were the rice and beans of the day, the staple food. It’s thought that perhaps large fish and other substantial sea animals were savored mostly during special occasions, Russo said.

Desperate dig for the past under way on disappearing SC island

Archaeologists once thought that these were special sites visited only once in a while, but an examination of the middens shows they were in use during every season. Did people live there full time? Was this a vacation home, a timeshare where everyone had to contribute something to the collective?

As he and his colleagues dig, they find a few posts — remnants perhaps of housing structures. Often a plaza is located nearby. Maybe that served the purpose of a town square or public gathering place or market.

In any case, Russo is pretty sure the middens were — or became with use — ceremonial.

“They became monumental after a while,” he said.

The Pockoy Island site is DNR’s most popular archaeological project, Gaillard said. During excavation work in May 2019, it drew more than 1,000 visitors and 400 volunteers.

DNR also is focused on a 19th century Gullah-Geechee fishing village located in the Yawkey Wildlife Center Heritage Preserve just south of Georgetown, working with experts in the Gullah community to investigate its structures and history.

In their effort to get a handle on the impacts of climate change and sea level rise on the state’s oceanfront land and nearby historic sites, the agency’s scientists are conducting a survey of the preserve’s shoreline, too.

Saving it all likely is impossible, Gaillard said.