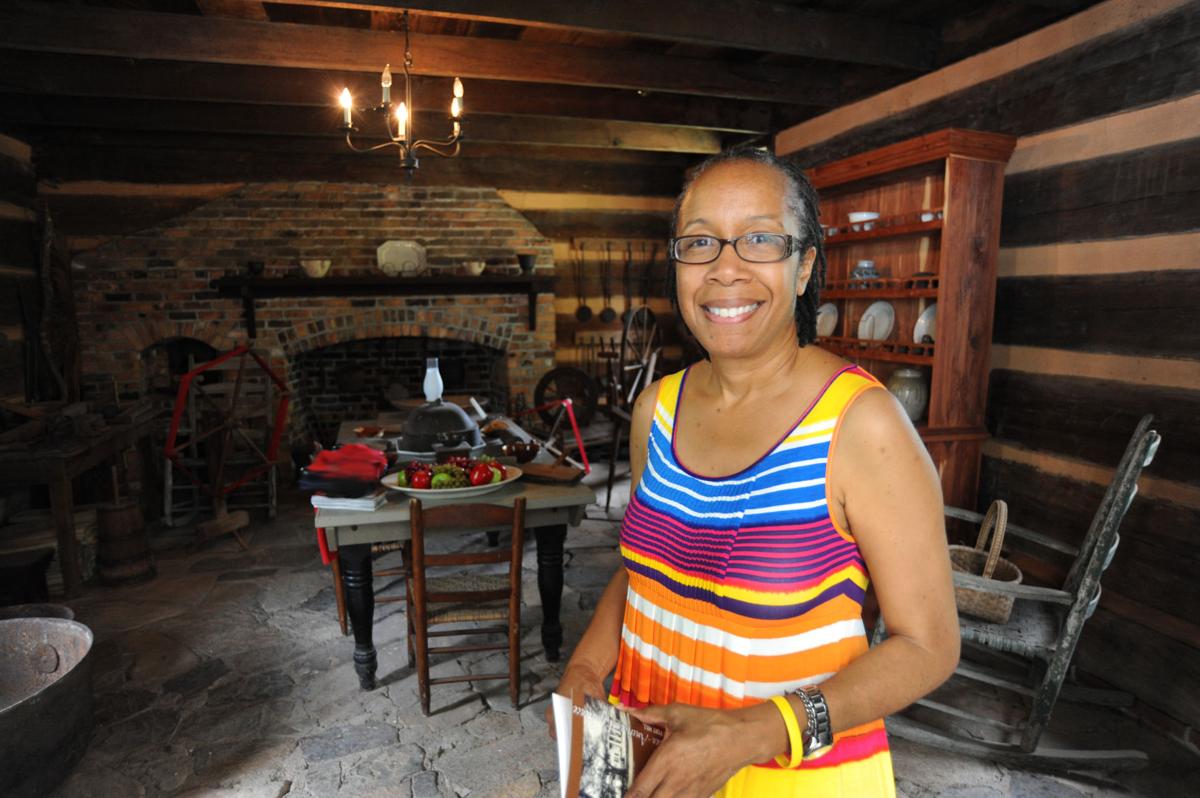 Rhondda Robinson Thomas in the reconstructed kitchen adjacent to the Fort Hill plantation house in 2013. Thomas' project, "Call My Name: African Americans in Early Clemson University History," is a long-term effort to document the contributions of six generations of free and enslaved people of African descent. Provided/Patrick Wright 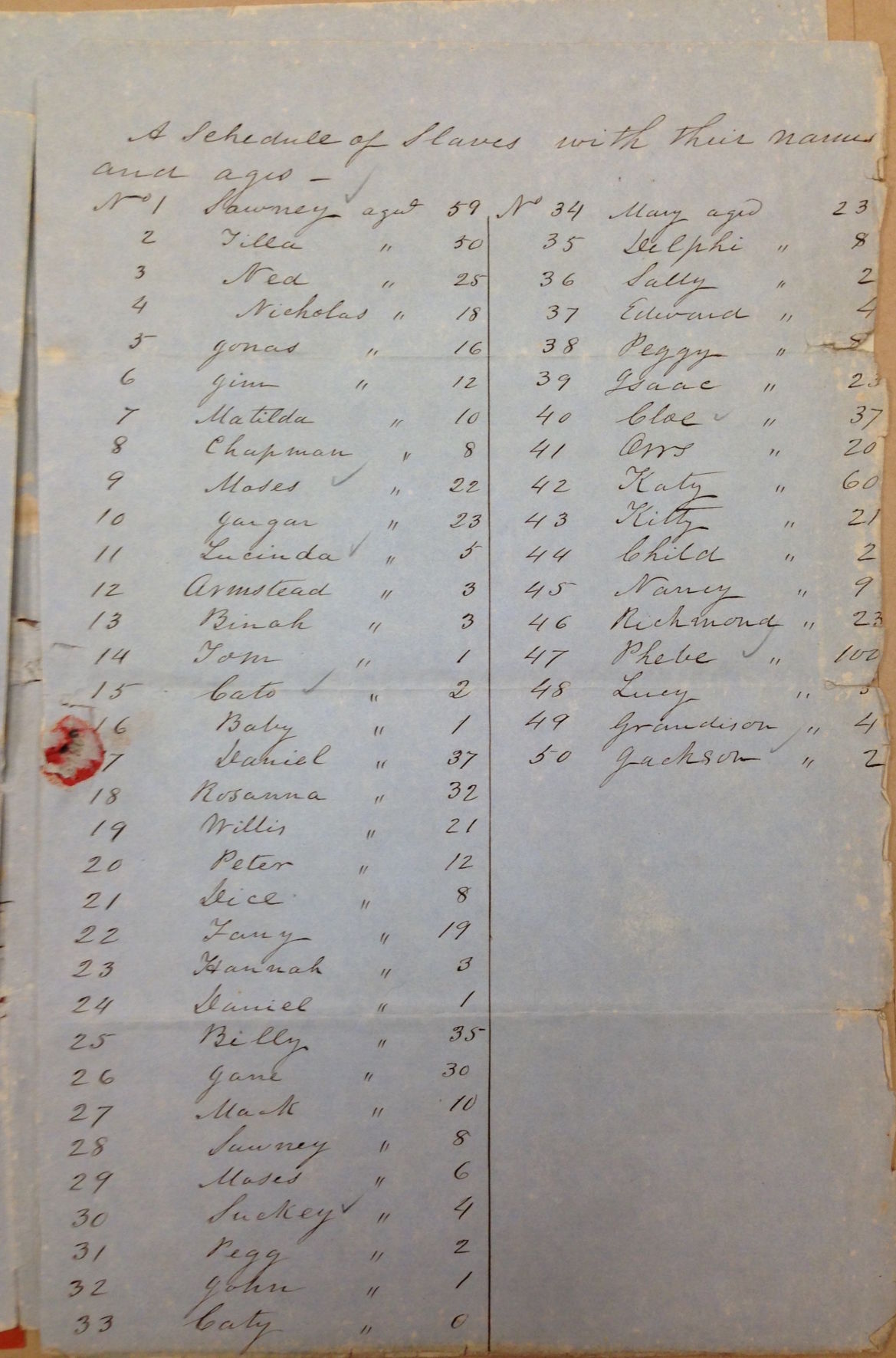 An inventory of enslaved people from the 1854 Fort Hill deed of sale. Provided/Clemson University Libraries' Special Collections and Archives 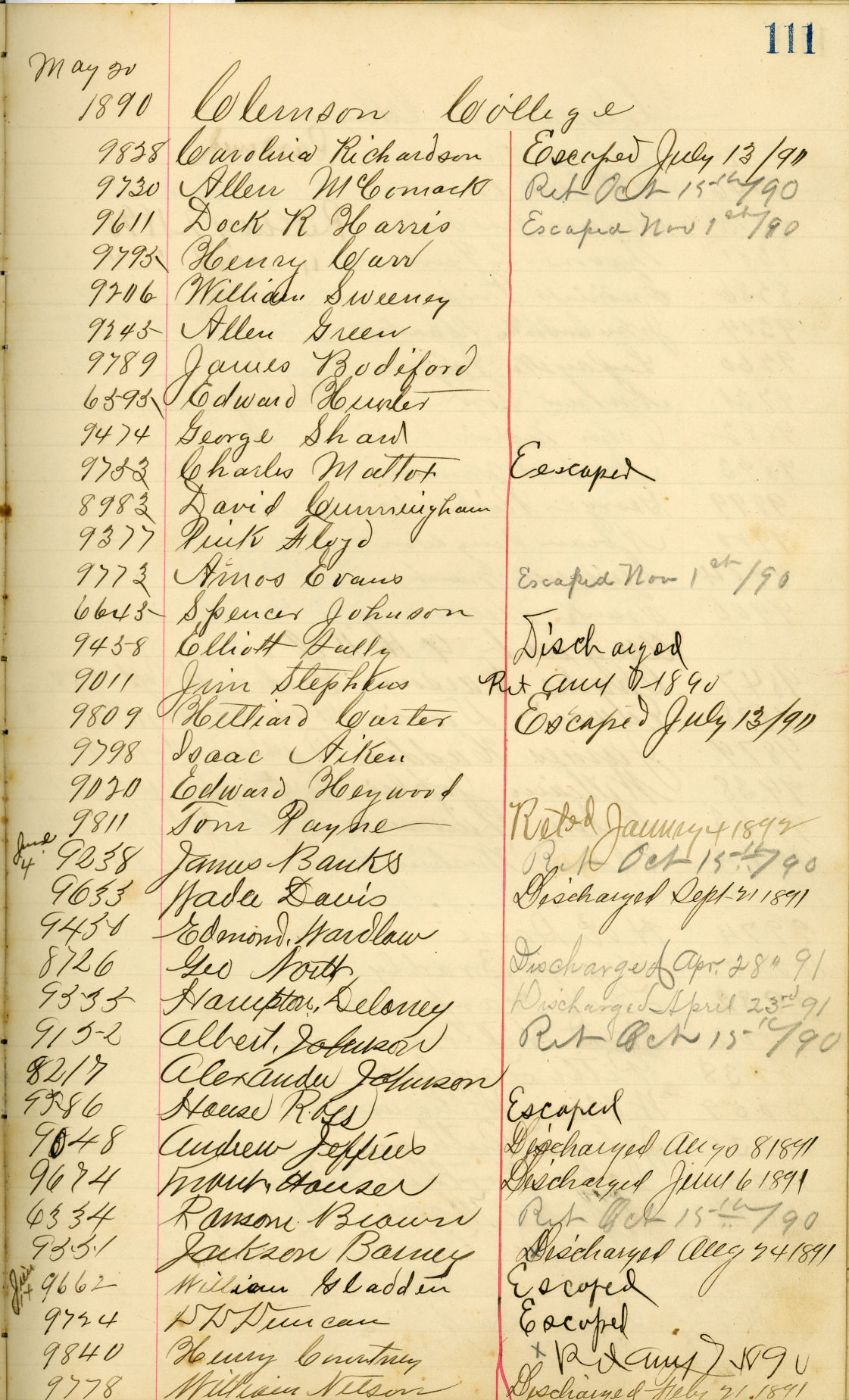 Farm and Contract Register, Volume 3, page 111, listing convicts who were assigned to work at Clemson College. Provided/South Carolina Department of Archives and History 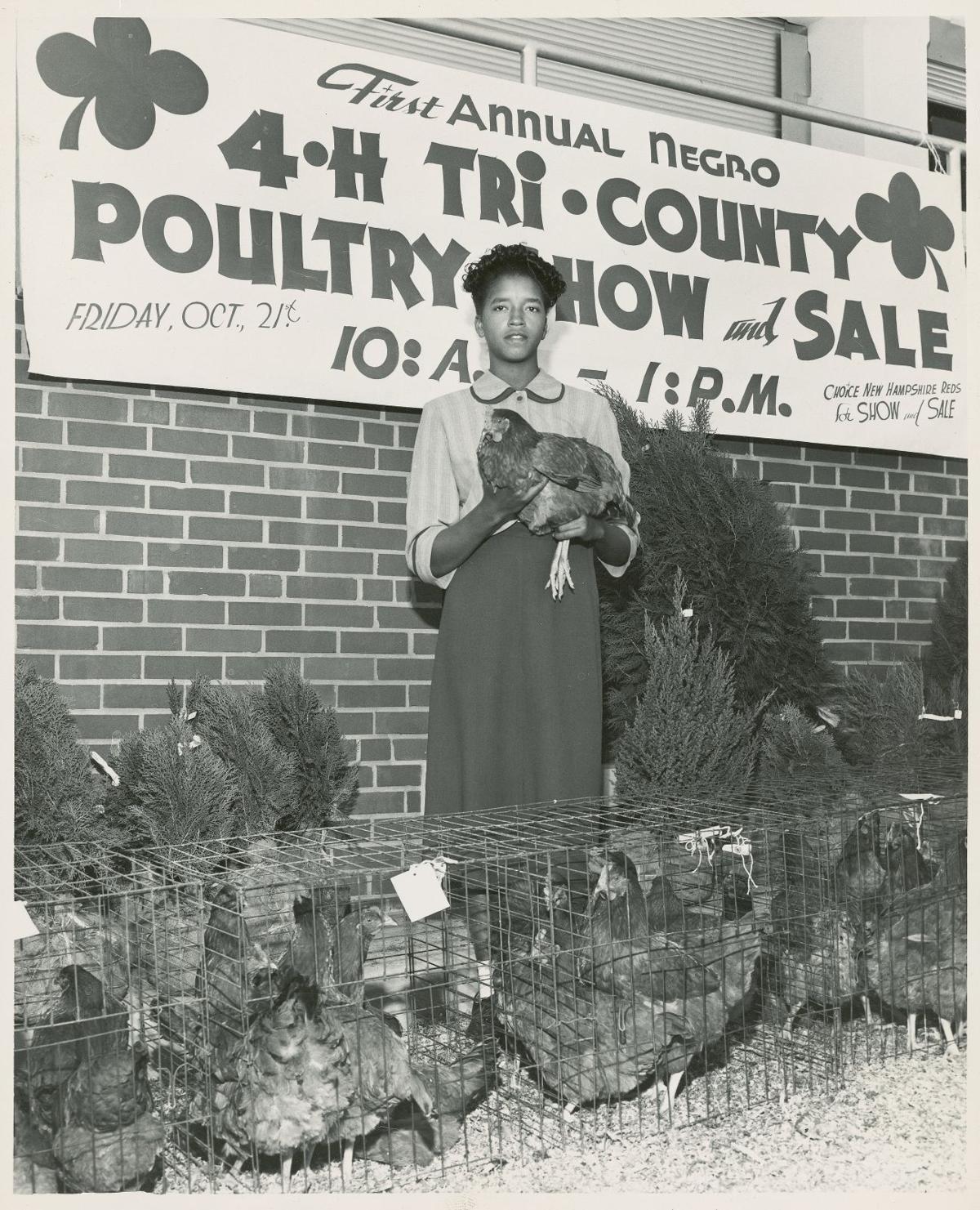 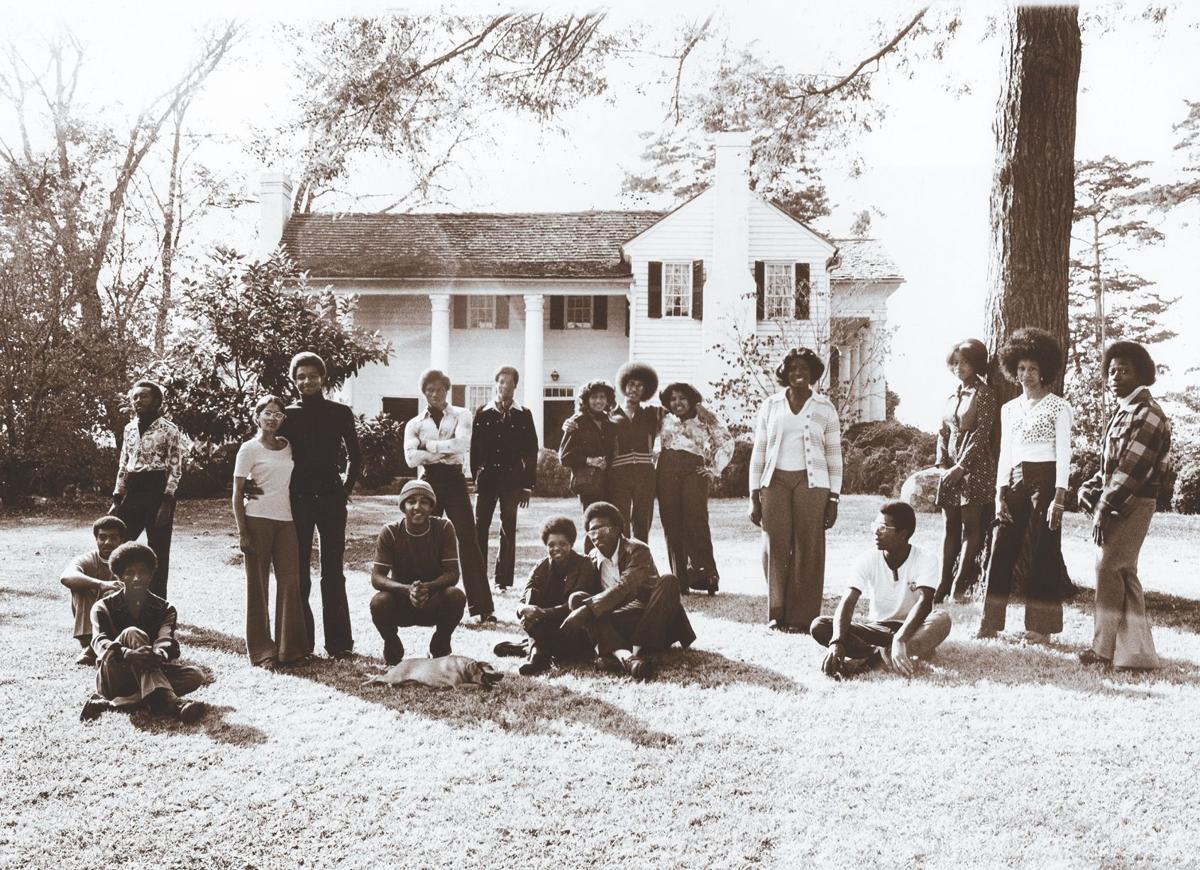 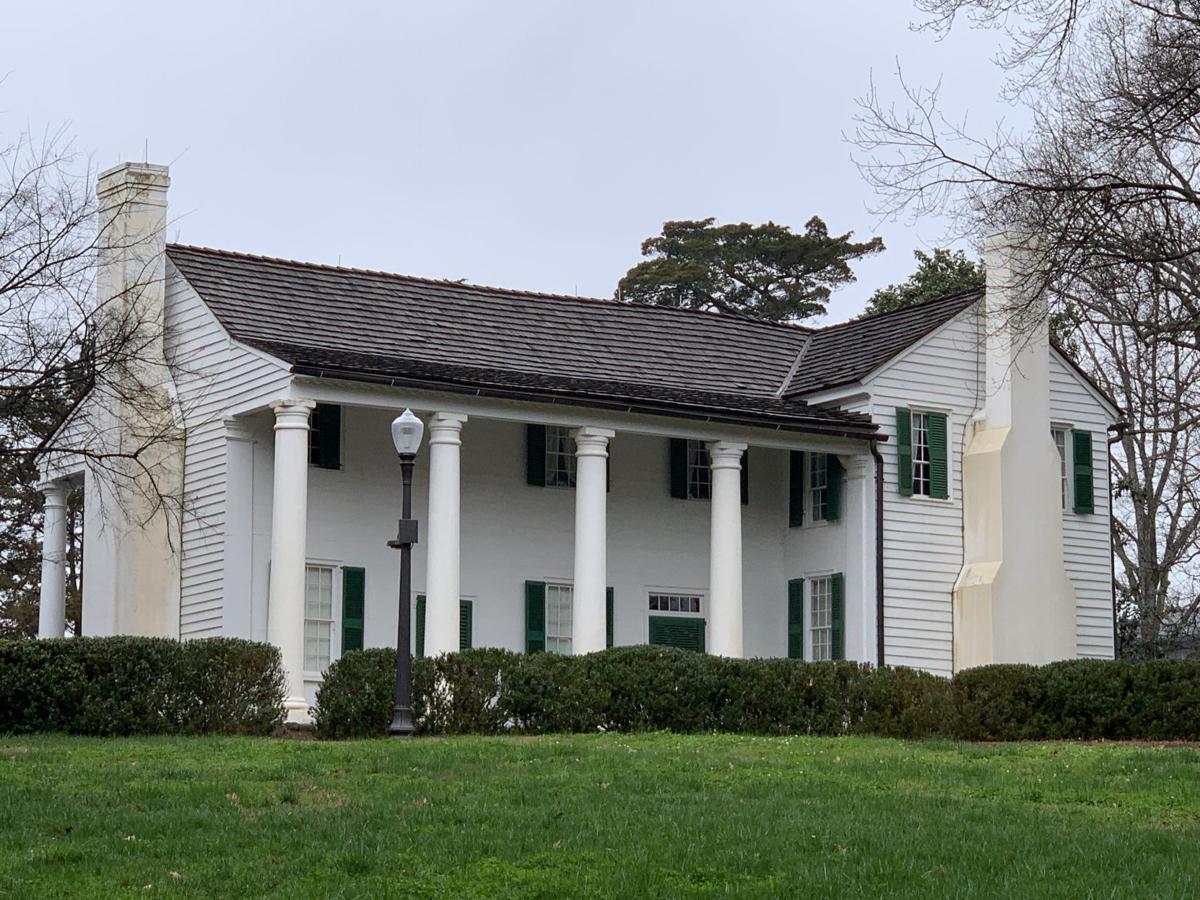 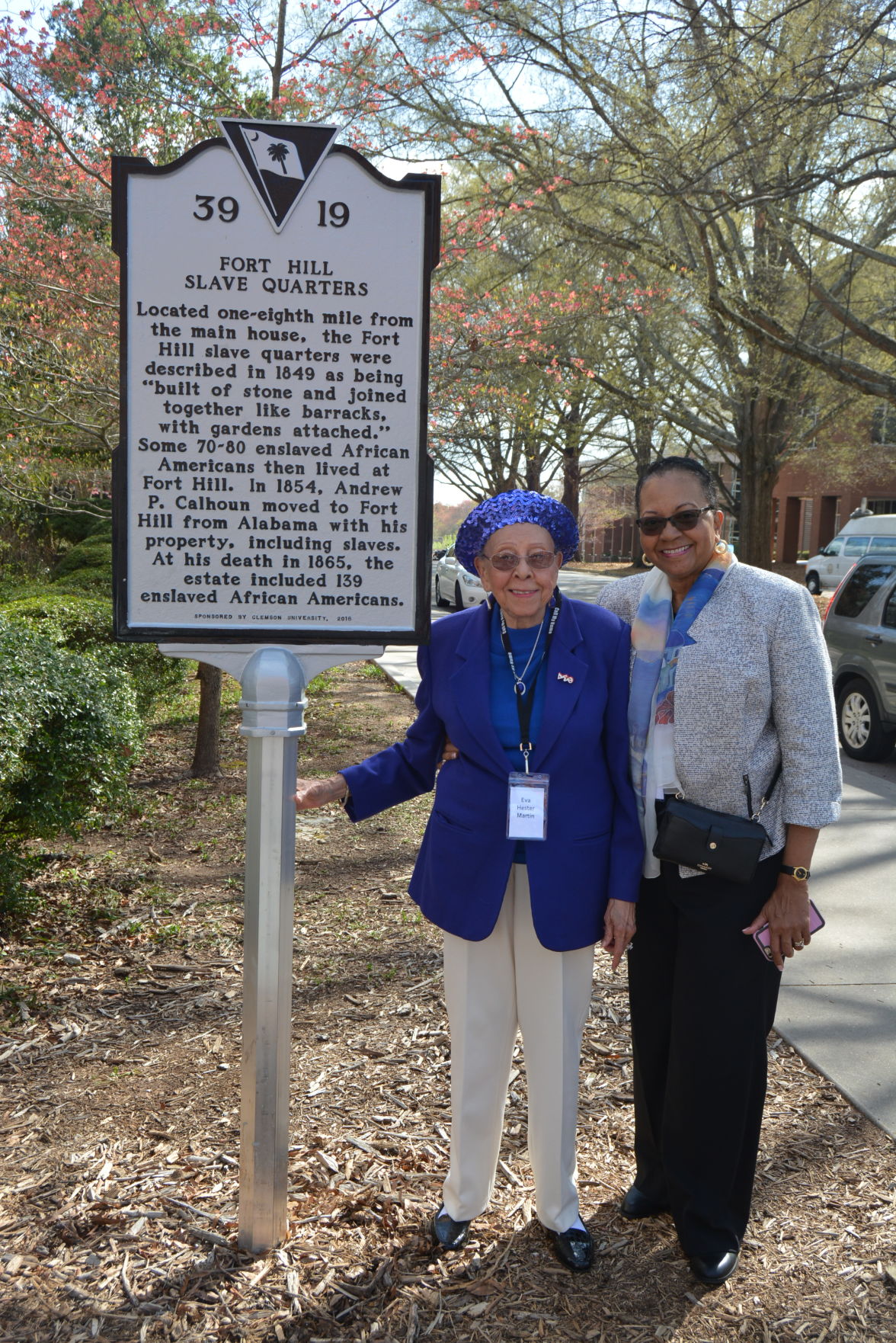 Eva Hester Martin and her daughter Valerie Martin-Lee, descendants of Sharper and Caroline and their daughter Matilda, who were enslaved on Fort Hill Plantation. The South Carolina historical marker is located at the former site of the Fort Hill slave quarters. Provided/Rhondda Thomas 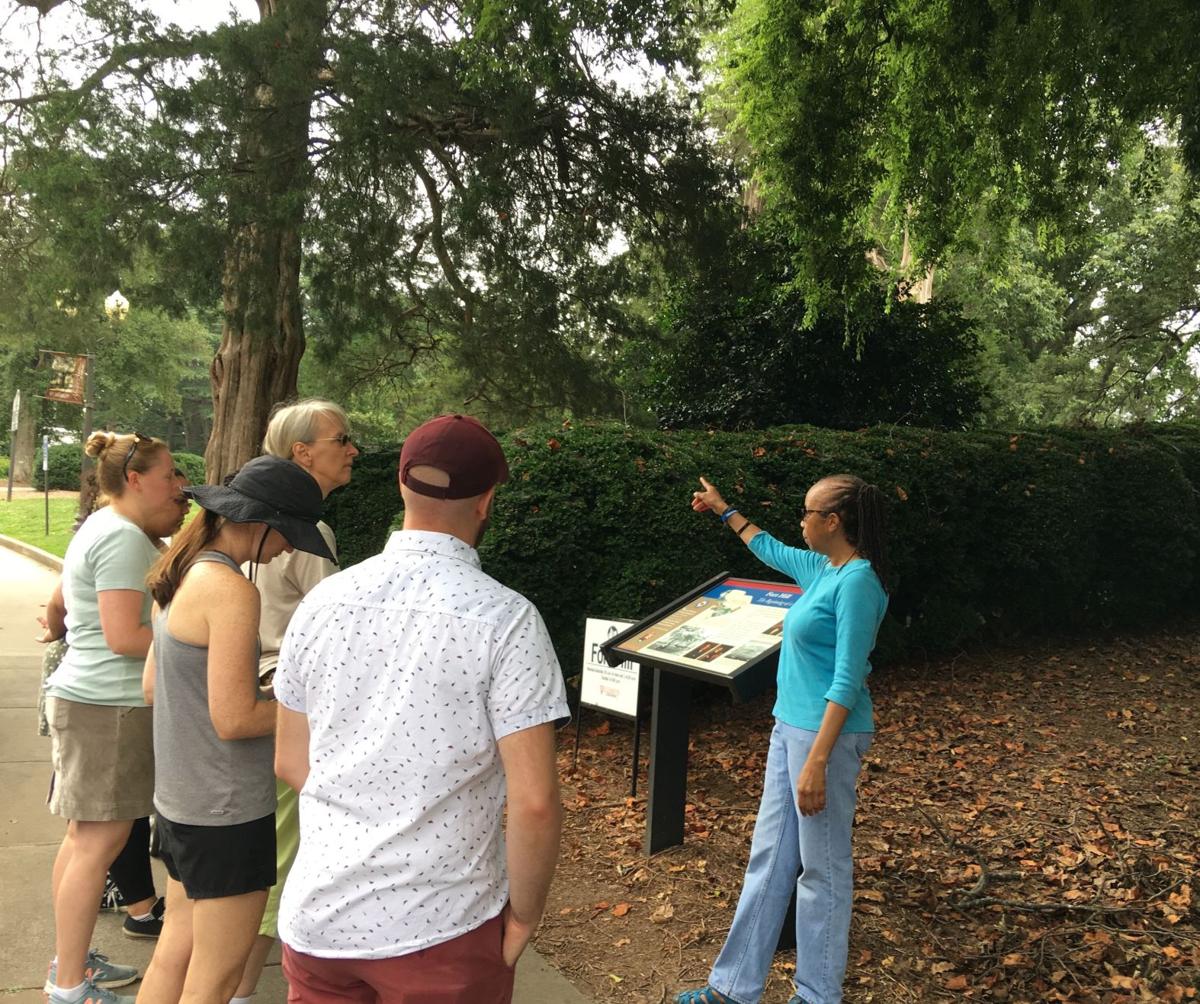 Rhondda Robinson Thomas arrived at Clemson University in 2007, filling a post-doctorate position in the English Department faculty. A colleague took her on a tour of the place, ending within a grove of trees at the heart of the campus.

Nestled there was Fort Hill, the former plantation home of John C. Calhoun.

“I was pretty astounded,” she said. “No one had told me.”

No one had told her that Clemson stood on the site of a former plantation where enslaved Africans toiled.

Almost immediately, she took her students to visit the historic old house, built in 1803 for the pastor of a Presbyterian church. It was then purchased by Calhoun in 1825, expanded and renamed. It became the epicenter of a sprawling plantation. Upon Calhoun’s death, ownership of the property transferred to his wife Floride and three of their children, Cornelia, John and Anna Maria, who was married to Thomas Green Clemson.

After various transactions, legal proceedings and an auction, the Clemsons ended up with the estate.

Thomas Clemson’s 1888 will stipulated that the state of South Carolina would inherit the 800-acre property for the purpose of establishing an agricultural college, and that the old house would never be demolished or altered and remain open to the public.

Touring the house museum with her students, Thomas heard no mention of slavery and asked the docents why.

“They said the subject was too controversial,” she recalled.

So she took it upon herself to figure out who exactly labored on this former plantation and what their contributions were.

Her efforts slowly gained momentum. She was uncovering a buried history. She was tracing a historical arc. She was giving credit where credit was due.

Then something happened that transformed what was essentially a self-directed informal effort into an official, funded, campuswide project.

She found the names.

Fifty names. There they were in Thomas Clemson’s papers, these inventories, kept in the school’s special collections and archives. The enslaved people of Fort Hill.

“That’s a starting point to piece together stories,” Thomas said. You begin with a name and, if your research is fruitful, if you are lucky, maybe you can determine more, maybe you can figure out what labor he performed, whose mother she was.

Little by little, Thomas was filling in the blanks, reclaiming lost lives.

She came upon more records — of sharecroppers and convicts leased to Clemson College, hundreds of them over the years.

These were black men and boys mostly arrested for petty theft (and sometimes for no good reason at all) and imprisoned in order to furnish free labor for farming, mining, road building, the construction of college campuses and more.

At least 75 of the 700 or so Thomas identified had clear links to Clemson.

“Slavery and integration were the bookends,” Thomas said. In between, during the course of a century, injustice persisted. And even after the civil rights movement, black students on campus were few. Harvey Gantt of Charleston was the first African American to enroll at Clemson, in 1963, and James Bostic Jr. of Bennettsville was the first to earn a doctorate (in chemistry) from the institution, in 1972.

What happened in the intervening years? And what has happened at Clemson since then?

Thomas’ “Call My Name” project seeks to answer those questions. One thing is certain, Thomas said: Clemson’s racial history is “part of a global narrative, a narrative rooted in the African diaspora.”

'Build on the legacy'

“Call My Name: African Americans in Early Clemson University History” is a long-term, long-range effort to research and document the contributions of six generations: free and enslaved people of African descent, sharecroppers, convict laborers, wage workers, musicians, and the students, faculty and staff of recent decades.

At least 129 enslaved people worked for the Calhoun and Clemson families at the Fort Hill Plantation as domestics, field hands, valets, gatekeepers, gardeners, blacksmiths, carpenters, carriage drivers and weavers, according to Thomas’ research.

“Between 1890 and 1915, Clemson College trustees successfully petitioned the South Carolina State Assembly at least three times for permission to lease incarcerated boys and men from the state penitentiary in Columbia to help build Clemson Agricultural College of South Carolina,” she wrote. “The men and boys assigned to the Clemson College convict detail hailed from nearly every county in the state and ranged in age from 12 to 67 when they were processed into the penitentiary. ... The majority of convicts assigned to work at Clemson College were under the age of 25.”

The convict workforce cleared land, made bricks, erected buildings and a dike, farmed crops, and built an extension station for Clemson College, a land-grant military institution for white cadets founded in 1889.

Wage workers were employed as domestics, cooks, farmhands, barbers, garbage collectors, groundskeepers, construction workers and butchers. They helped with the operation of the institution.

The project encompasses much more than history; it’s meant to foster conversations about Clemson and its priorities today, said Lee Morrissey, an English professor and founding director of the Clemson Humanities Club.

Should the school change the names of buildings, such as Tillman Hall (which had been called “the Main Building” until 1946)? Should more historic markers go up? Should the university do more to diversify its faculty, staff and student body?

“It hit a ceiling with the numbers of African American students,” Morrissey observed. “We’ve got to address this if the campus is to become more attractive to prospective students. We’ve got to build on the legacy of Harvey Gantt.”

Several years ago, after Thomas found the convict records, she and a few colleagues started a campus lecture series, endorsed by the administration, called “Race and the University.”

For more than 15 years, various colleges and universities — such as Brown, Georgetown, Harvard, William & Mary and Princeton — have delved into their history, acknowledged their role in sustaining and exploiting the institution of slavery and sought to find ways to make amends. With an eye toward improving African American enrollment numbers, the College of Charleston recently produced a short documentary, “If These Walls Could Talk.”

In early 2017, Yale changed the name of its Calhoun College, named for the same South Carolina slaveholder and white supremacist associated with Clemson, to Grace Murray Hopper College. (Hopper was a computer scientist, mathematician and Navy veteran who earned two degrees from Yale in the 1930s.) In late 2017, the University of South Carolina unveiled two prominent plaques recognizing the role of slave labor on campus.

“This is a national thing,” Morrissey noted. “‘Race and the University’ was one way that Rhondda helped Clemson join that national conversation.”

And that has led to related campus discussions, conferences and events, as well as partnerships with the Bertha Lee Strickland Cultural Museum in Seneca, Clemson Area African American Museum and other organizations, he said.

The project has received robust institutional support from the English Department, provost’s office and board of trustees, Morrissey said.

“I was department chair for seven years, and I never heard from anyone saying this needs to be reined in, or, ‘What’s Rhondda doing?’” he said.

In February, Thomas will spend an $11,000 National Endowment for the Humanities grant on a two-day event called “Documenting Your Roots.” The grant is part of the Common Heritage program, meant to help preserve aspects of America’s cultural legacy. Members of the public will be invited to bring documents and other materials for free digitization, and to donate items to Clemson for safekeeping in the special collections archives.

Paul Anderson, part of the history department faculty for 20 years, was hired as Clemson’s full-time historian in May. It was a “pretty significant move,” he said. His mission, in large measure, is to examine the university’s entanglement with slavery and its treatment of black people, he said.

“There are something like 250 archaeologically significant sites that we could, if we choose, begin developing,” Anderson said. “It’s a rich, rich history and not exclusive to this very troubled past of slavery and race. A lot of these issues have been percolating for a good decade.” He said the “Call My Name” initiative can help “to reconcile some things that have not been talked about.”

Thomas Green Clemson’s mandate for the institution he founded was to prepare students for the future while preserving the legacy of Fort Hill, he noted.

“That means we have to engage with the university’s past,” Anderson said. “In that sense, Clemson is fulfilling its obligation.”

Thomas said the dozen years she has spent on the project has been rewarding in a scholarly sort of way, but occasionally she encounters something that shocks her.

At reparations forum in SC, a descendant of American slaves leaves with questions

“I was not expecting to find boys on the convict crew,” she said. “The registry only had prison numbers and names and notes, but looking at the archives with that demographic information, I discovered men of all ages. Then one day I came across the name of Wade Foster, a farmer. I got to the age column and it said 13. ... I couldn’t believe I was looking at the number 13. I couldn’t work, I had to take a break. That was a pretty sobering moment.”

“A little while later, I came across a 12-year-old, Simon Davis, from Abbeville County, where the Calhouns were from,” she said. “It made this story more important, and resonate more with me.”

And then there was the time Thomas met an elderly woman who lived about 20 minutes from campus, a descendant of one of Clemson’s black laborers.

“When I walked into her house, she had set up a family tree of photographs on her dining room table. The photograph at the top of the tree was a woman named Mathilda, and I had seen that picture, and now I was standing in the room with her granddaughter.”

Soon after, Thomas discovered her own family connection to the school — a great-great-grandmother with the last name of Wannamaker who shared her name with an early school trustee, and with a building on campus.

“Every time one of these things happen, it reminds me that this is not just a Clemson story,” Thomas said. “It’s a story that reaches across the oceans.”