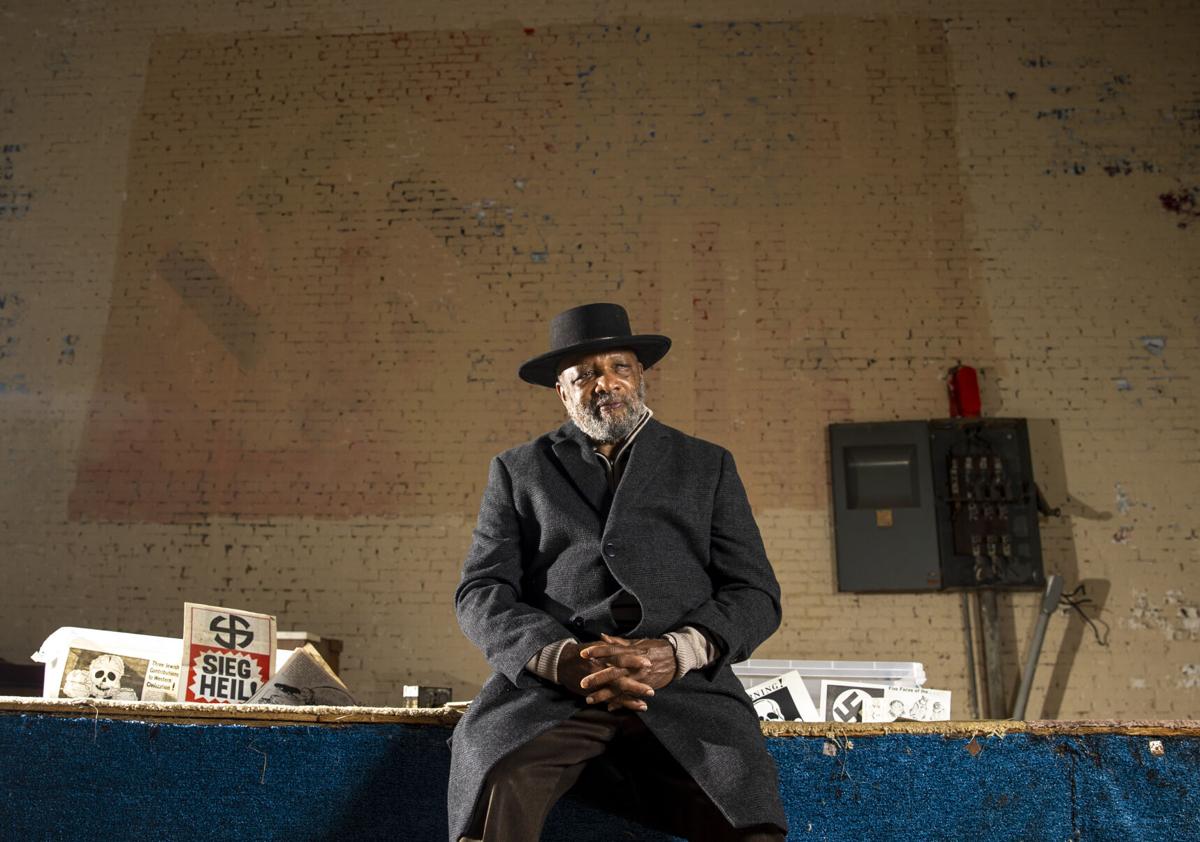 The Rev. David Kennedy sits with recently obtained Ku Klux Klan and American Nazi propaganda on the stage of the old Echo Theater. Behind him on the wall is a faded swastika. The theater will be transformed into a multicultural community center and museum. Andrew J. Whitaker/Staff 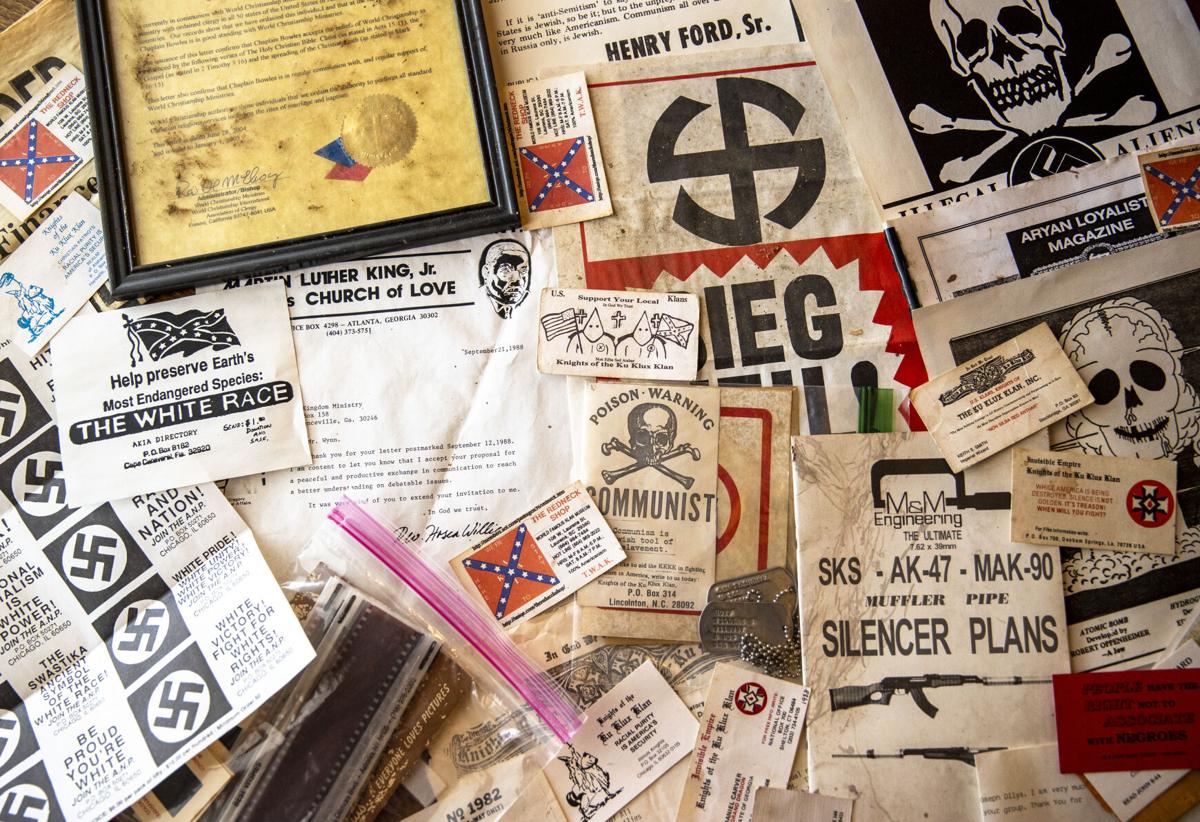 Echo Project Executive Director Regan Freeman recently happened upon a huge cache of Klan and Nazi materials that had been collected by the late Klansman John Howard, operator of the former Redneck Shop in Laurens. Freeman wants to use the materials to help tell the story of the Echo Theater and its history, and to spark dialogue and reconciliation. Andrew J. Whitaker/Staff 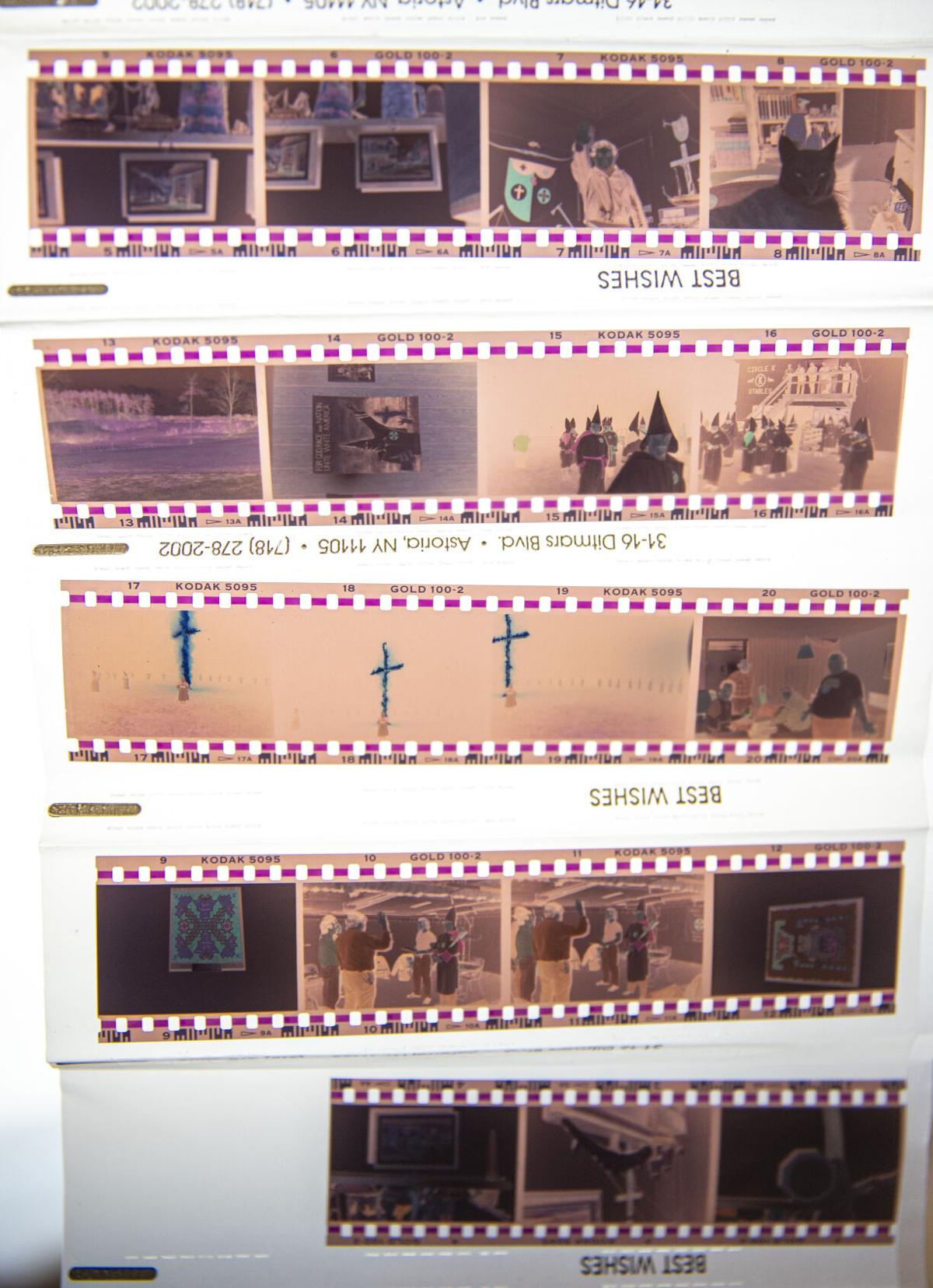 Film negatives of Ku Klux Klan meetings and cross-burnings are part of the collection of materials secured by Regan Freeman of the Echo Project. He is intent on engaging historians, educators and civic leaders in the enterprise, developing a school curriculum and provide a safe space for dialogue. Andrew J. Whitaker/Staff 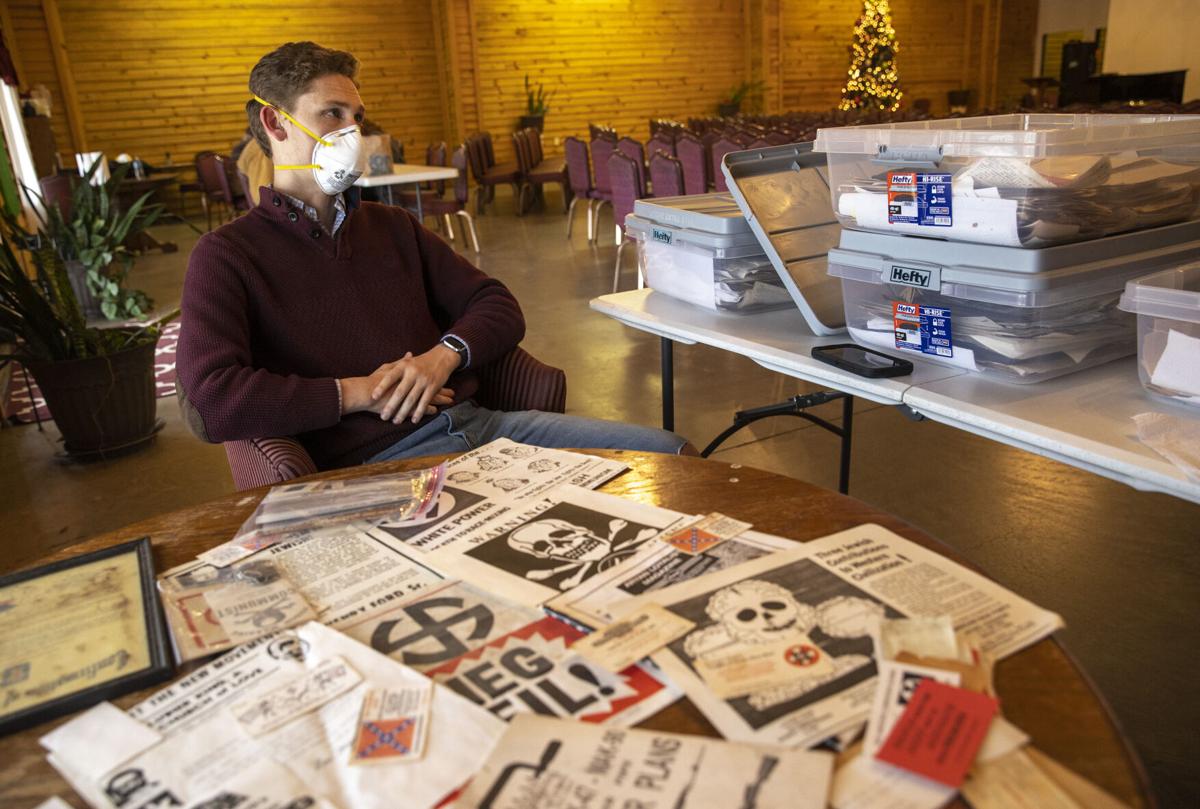 Echo Project Executive Director Regan Freeman sits among recently obtained documents, news clippings, flyers and other propaganda that had been stored at the property of John Howard, former operator of the Redneck Shop in Laurens. Freeman intends to engage historians and educators in an effort to contextualize the materials and develop a school curriculum. Andrew J. Whitaker/Staff 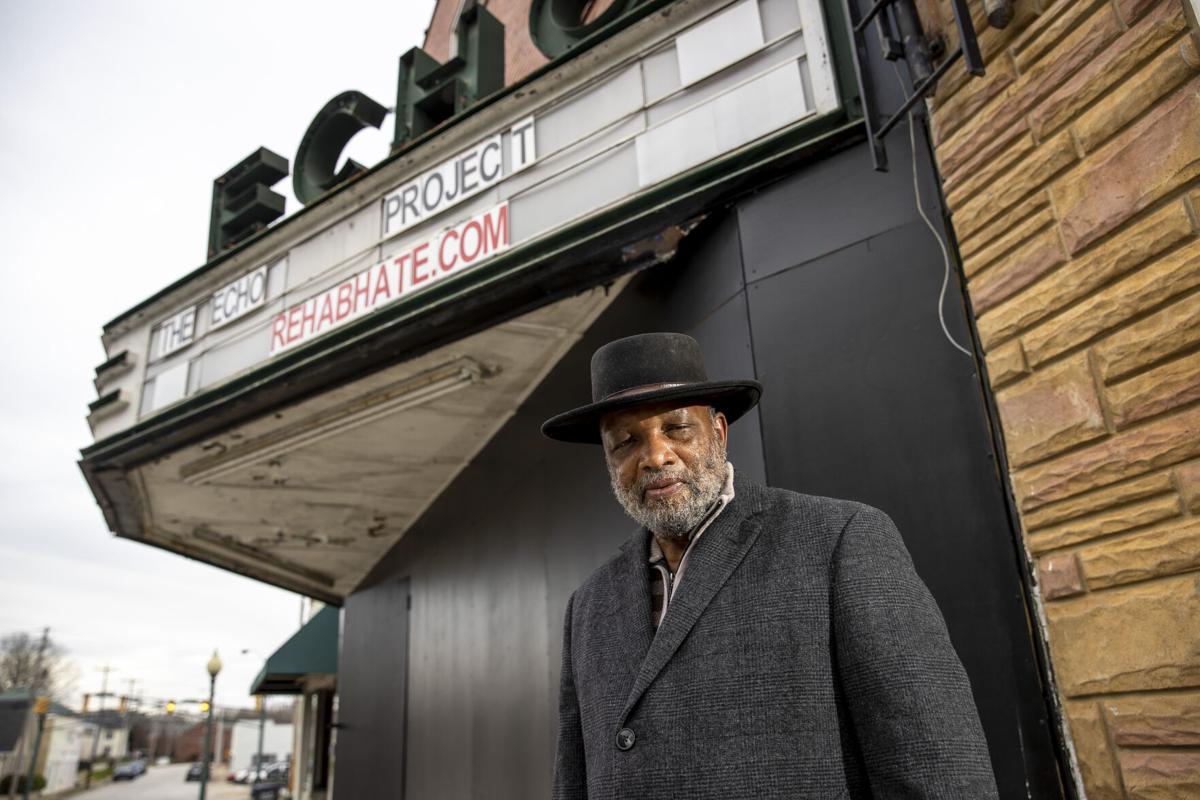 The Rev. David Kennedy in front of the Echo Theater in Laurens, which once housed the Redneck Shop and hosted Klan and Nazi meetings. Kennedy, pastor of New Beginning Missionary Baptist Church in nearby Clinton, spent years protesting the shop. The theater is being transformed into a multicultural community center and historic site. Andrew J. Whitaker/Staff

LAURENS — The old Echo Theater in this small Upstate town started out as a segregated movie house. Black people entered through a side door and were relegated to the balcony. From 1996 until 2012, the building housed the infamous Redneck Shop in the lobby and a cavernous gathering hall in the former theater space where the Ku Klux Klan and American Nazi Party held meetings and parties.

Now, it's on the cusp of a major renovation. It will soon become a public center of racial reconciliation featuring a museum, learning space, and meeting room.

This collection, evidence of Howard’s racist obsessions, helps show how the hatred we witness today is connected to the political ideology espoused at the Redneck Shop, an ideology rooted in America's original sin.

It’s a disturbing historical throughline that is too often dismissed or distorted, noted Freeman and the Rev. David Kennedy, who are spearheading the theater renovation efforts.

The common denominators are hatred of Blacks and Jews and fear of race-mixing, as the materials Freeman found demonstrate. The rhetoric, then and now, is about taking the country back, saving America from a conspiracy of non-White reformers and their liberal allies.

“It blows my mind that this (legacy of racism) is not taught in South Carolina schools,” Freeman said. “The people now online are the ideological descendants of these (propagandists). You have got to know about this to combat that. You have got to tell the truth.”

Kennedy and his young protégé are hoping to confront these issues head-on by transforming a story of personal redemption into an ambitious civic project that might just help redeem a whole city, draw visitors to Laurens and, perhaps, play a larger role in fostering productive dialogue statewide.

They have raised nearly $400,000 for the renovation of the Echo Theater.

In a fascinating twist of fate, ownership of the theater property passed in 1997 from Howard to his young protégé, Michael Burden, who later repudiated the Klan and, desperate for money, sold the deed to Kennedy and his New Beginning Missionary Baptist Church.

The deed came with a stipulation that the Black preacher could do nothing with the property until Howard died. In 2012, Howard closed the Redneck Shop for good. On Sept. 6, 2017, the Klansman entered the annals of history, though it was apparent to anyone paying attention to news headlines that the hatred he espoused was deeply embedded in the fabric of the country.

So Freeman, Kennedy and their collaborators made plans to turn the former theater and meeting place of the Klan into a community center that celebrates diversity, confronts history honestly and fosters dialogue.

Early last year, the team set up a nonprofit, which Freeman runs, then secured corporate funding from Walmart and Boeing, launched a GoFundMe campaign and website (rehabhate.com), signed on Michael Allen of Greenville-based MOA Architecture and created a historical advisory committee chaired by Orville Vernon Burton of Clemson University.

On June 1, the feature film “Burden” by Andrew Hacker was released on DVD. It includes information about The Echo Project and encourages viewers to make a donation. That’s when some money started to flow in, from people in every state and 20 countries, Freeman said. More than 4,000 individual donors so far have made contributions.

Then, a couple months ago, Freeman on a whim paid a visit to Howard’s home and met the woman now living on the property. She handed over garbage bags full of material she was about to throw away.

Inside the bags, Freeman discovered an enormous cache of Klan and neo-Nazi items, evidence of Howard’s activities over the years. Apparently, he saved just about everything, Freeman said.

Plans for the center include some kind of display that will contextualize this material. The Echo Project also will develop a school curriculum and possibly offer diversity training to businesses. It is modeled after the Anne Frank House in Amsterdam and Emmett Till Interpretive Center in Mississippi.

“This is literally the embodiment of hate not winning,” he said.

Freeman is astonished by the sheer volume of hate that Howard compiled, and its reach. The collected items reference many places, not just South Carolina, revealing a vast network that extended across the country, up and down the East Coast and even to Germany.

The Redneck Shop was a hub for the dissemination of this propaganda, but the building served a greater purpose: It was the headquarters from 2007 to 2012 of the American Nazi Party, from which John Taylor Bowles ran his 2008 campaign for president of the United States.

This hub has been cited on Stormfront, the white nationalist and anti-Semitic internet forum favored by racists and murderers. Freeman shivers when he thinks about the Confederate battle flag that served as a backdrop for the photo of Dylann Roof, a Stormfront user who killed nine Black members of Emanuel AME Church in Charleston in 2015.

Kennedy, who grew up contemplating the noose from which his great-great uncle Richard Puckett was lynched in 1913, set forth to protest the Redneck Shop as soon as he heard about it in 1996. He became a thorn in the side of Howard, who had signaled to Burden that it sure would be nice if the young man could eliminate the irritant.

He was there to protest the 2006 rally at the old Echo Theater at which North Carolina Klansman Virgil Lee Griffin spoke. In 1979, Griffin led a caravan of Klan members and American Nazis into the heart of Greensboro, N.C., triggering a shootout with labor organizers and workers that left five dead. He and the rest of the white supremacists involved in the Greensboro Massacre were enabled by police and acquitted in federal court by an all-White jury.

Kennedy was there in 2007, when, on Hitler’s birthday, Bowles announced his candidacy for president. And he was there to confront Howard in his shop, to stand in the street in defiance, to mobilize the Black community of Laurens, to organize demonstrations.

Year after year, Kennedy was there, preaching love, protesting racist division. Some in Laurens thought he was a provocateur upsetting the calm of this otherwise quiet Upstate community. He has been threatened, his property destroyed. But Kennedy would not relent and, eventually, he gained important allies in Mike Burden and his girlfriend Judy.

His persistence took a toll, but he prevailed. And now — he really didn’t think he’d ever see the day, he said — his dream of transforming the old Redneck Shop into something positive is about to come true.

Those stories of resistance also will be part of the new enterprise, and help is coming from the historical advisory committee led by Burton, which is now being assembled. The committee will include Nicholas Gaffney, director of the Center for African American Studies at the University of South Carolina Upstate, and other scholars so that the history of the Redneck Shop in Laurens can be told with honesty and academic rigor.

“I believe in redemption,” Burton said. “I think it’s an extraordinary opportunity, if it’s done right, to preserve things, to remind us of how we can go wrong.”

The committee will find and frame stories to be told at the new center, and work to describe a long continuum of white supremacy that has been at the root of the country’s politics. By Burton’s count, 12 generations have endured the brutality of legal slavery and segregation; just two generations have navigated a political and social system that was not explicitly based on racist laws and policies.

The recently uncovered cache of Klan and Nazi materials is “part of the larger narrative of who we are,” Burton said. “It’s been too easy all our lives, particularly for White Southerners, to know what African Americans faced.”

For Freeman, telling the full story is essential and, in so doing, asking big questions, such as “What is justice?” and “How can a community move forward?”

That will require difficult conversations over time, an abundance of good faith, and genuine concern for one’s neighbors. That’s what the new center is there to champion.

“Truth and reconciliation here in Laurens, that’s Priority One,” he said.