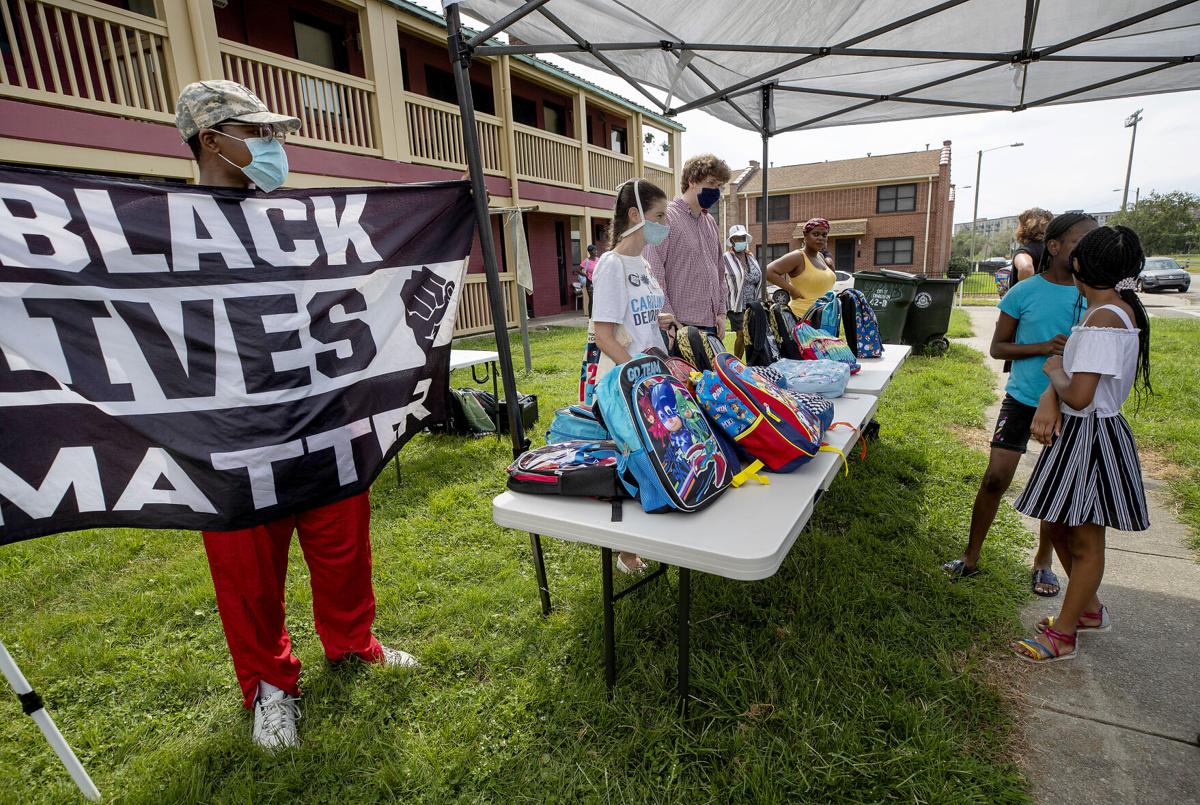 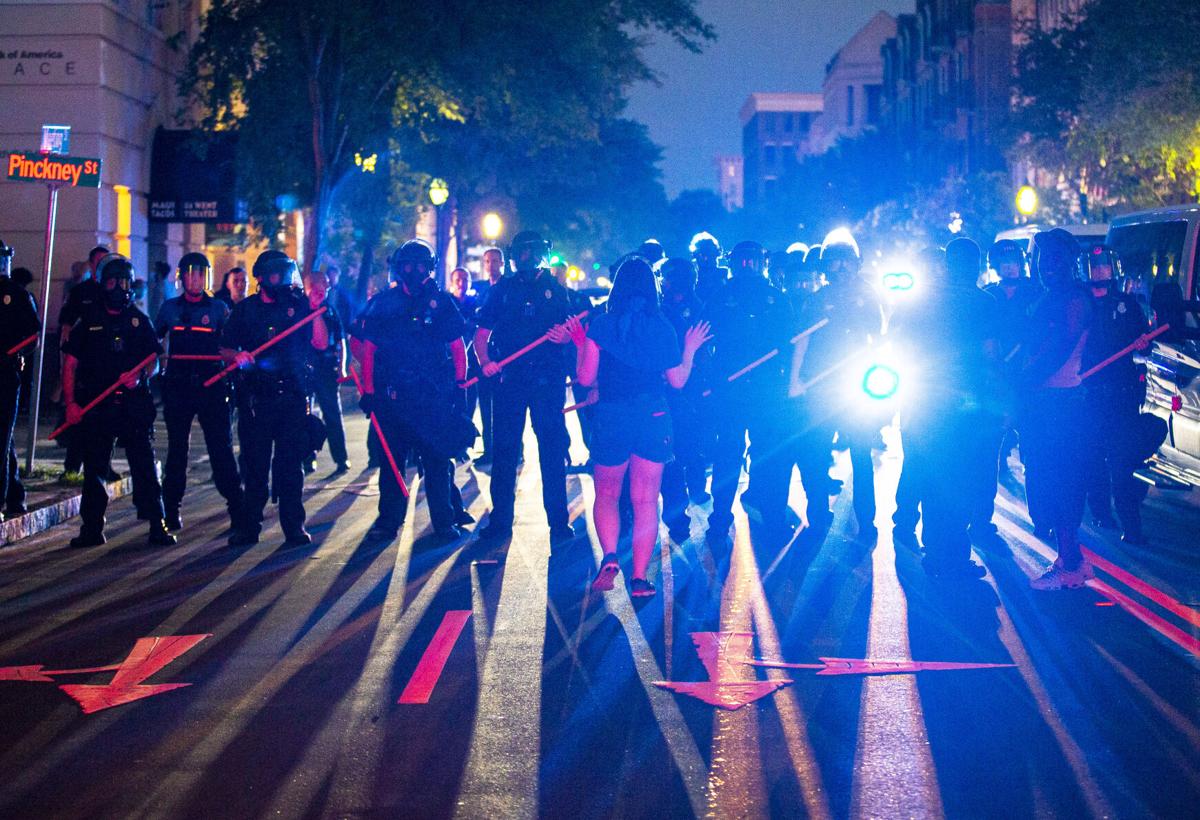 Demonstrators are confronted by police on Saturday, May 30, 2020, in Charleston. File/Andrew J. Whitaker/Staff 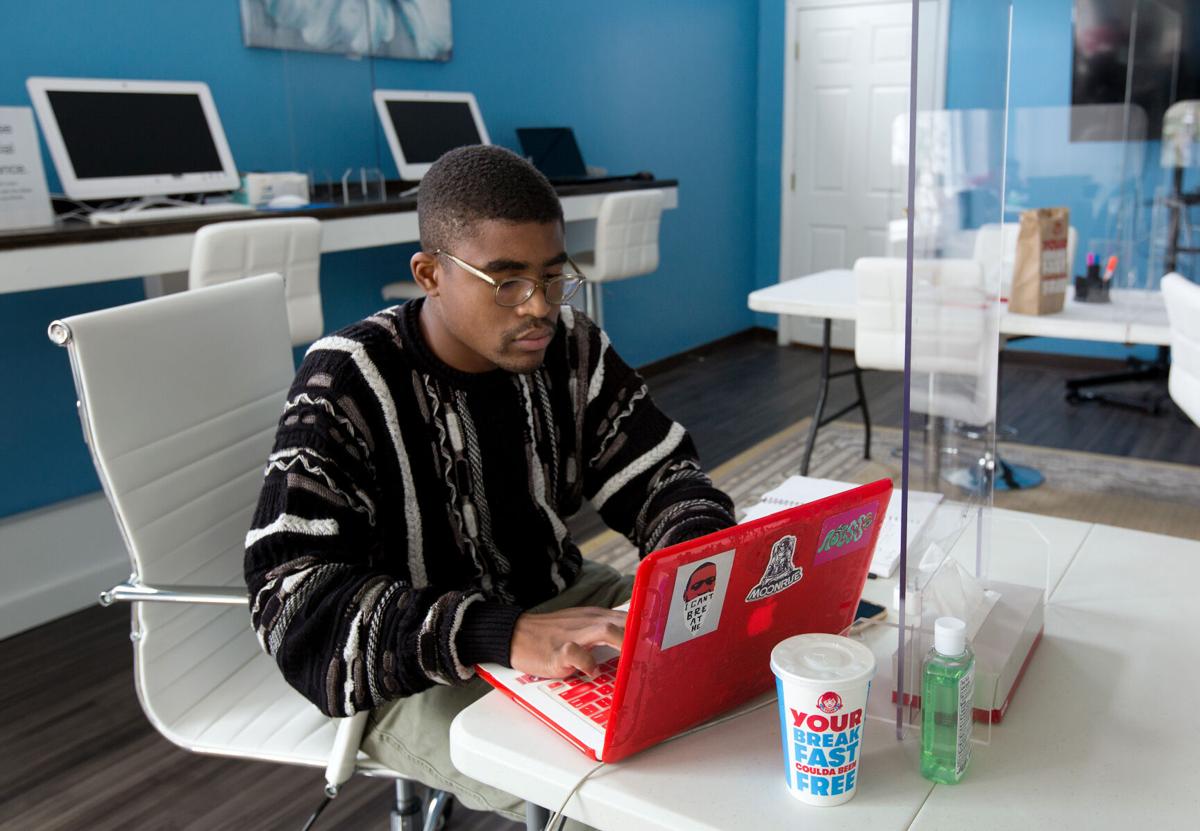 During the last few months, Marcus McDonald helped set up the internet cafe in the East Side Development Corporation building. It is used by K-12 students from the neighborhood. McDonald leads the Charleston chapter of Black Lives Matter. Grace Beahm Alford/Staff 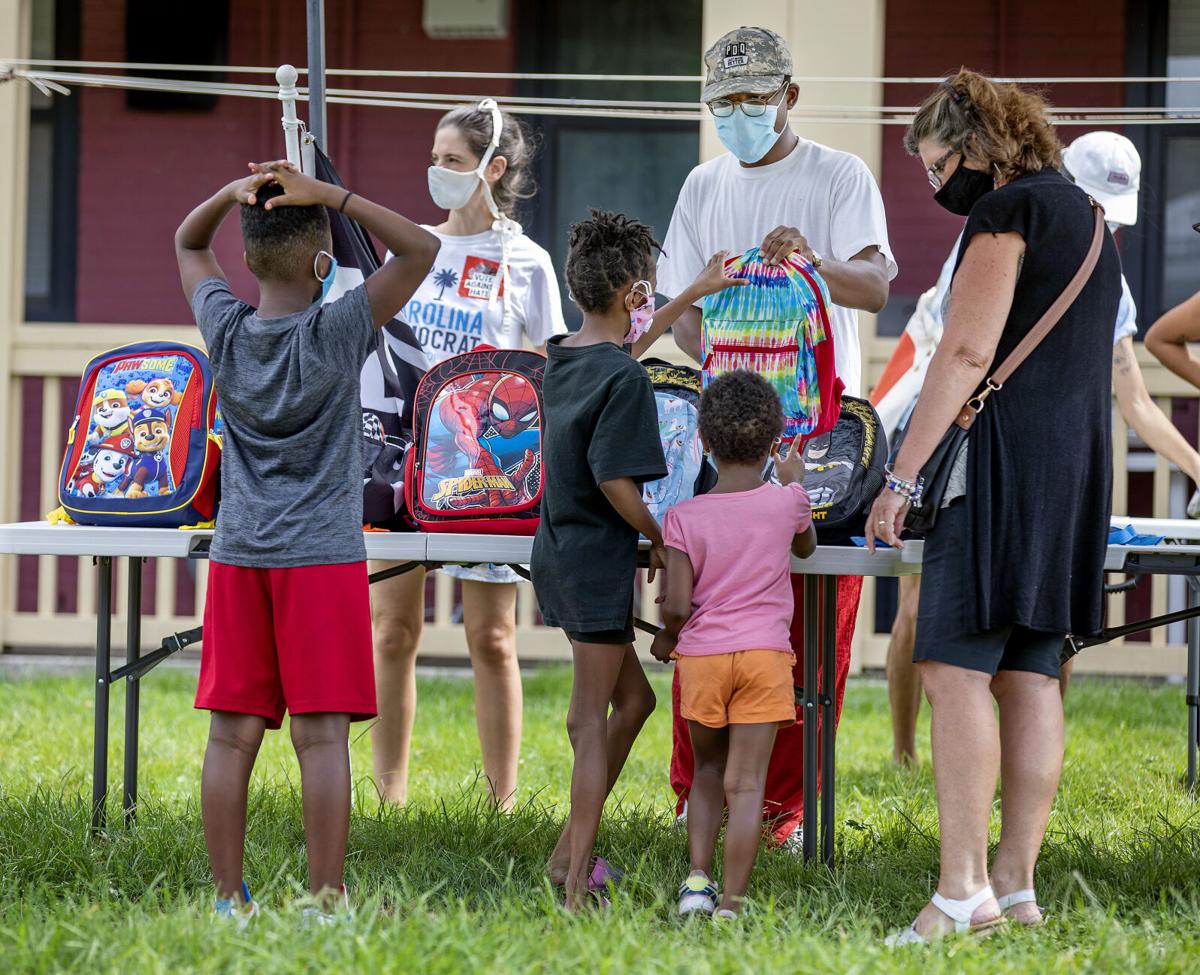 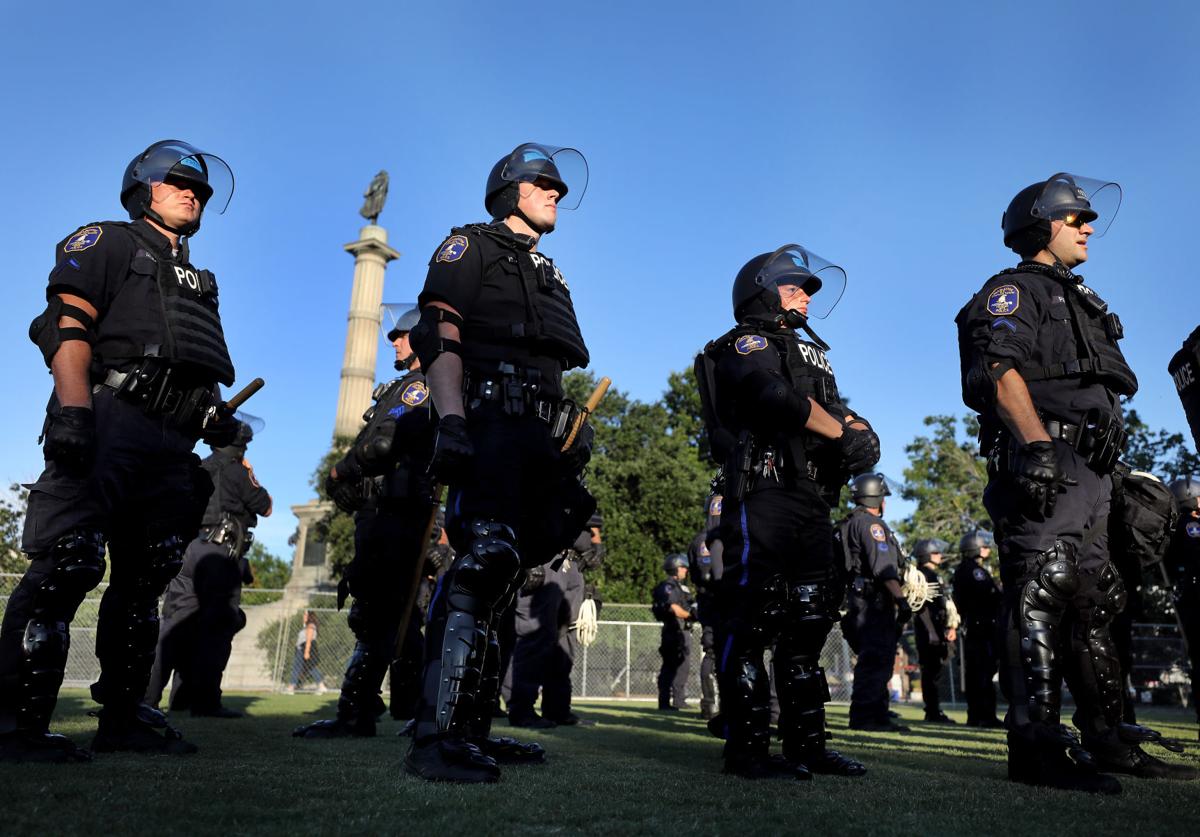 Police in riot gear arrive in Charleston's Marion Square to shut down the park on June 22, 2020. File/Grace Beahm Alford/Staff

At the East Side Community Development Corporation, Marcus McDonald is helping to set up the internet cafe and game room. He has spent many hours here over the summer and into the fall helping Latonya Gamble prepare the space — an old first-floor storefront with big windows facing tiny America-Amherst Park.

McDonald does more than move the bright new furniture around. He recruits supporters and tutors the children who have started to use the cafe to do school work, assisting them with math or social studies assignments.

When he’s not at the cafe, McDonald, 23, is coordinating with an inner circle of colleagues, attending public meetings about civic issues, promoting criminal justice and education reform, and registering voters. Sometimes he leads a local protest, using his trombone as a beacon of dissent.

McDonald is the leader of the Charleston chapter of Black Lives Matter. It’s difficult to pin down the local group. It’s not an organization in the traditional sense. It isn’t incorporated. It doesn’t have a bank account. It has no formal budget. Not yet, anyway.

Really, it’s just a group of people, around 15, who work together on social justice issues, McDonald said. They’re joined by many others for public rallies. BLM Charleston is one of hundreds of groups nationally that operate under the Black Lives Matter banner.

This is a loose coalition of activist groups, and the decentralized structure means there is no clear hierarchy, no single leader, no uniform ideology. There is only a basic agreement that the slogan is necessary because of institutional racism in the U.S. and that the fight for justice is a grassroots endeavor.

“Mostly, it’s a bunch of people working towards the same goals,” McDonald said.

And those goals can differ, to a degree, depending on each community’s particular circumstances, he said. In Charleston, BLM works on three main issues: education reform, economic development and criminal justice reform.

“We like to focus on things we can feasibly change,” he said.

Not all BLM chapters receive funding or other forms of support from these two organizations. Many of the chapters find support from local nonprofits and activist networks.

The Black Lives Matter Foundation traces its origins to the 2013 acquittal of George Zimmerman, who fatally shot 17-year-old Trayvon Martin.

Three Black women — activists Alicia Garza, Patrisse Cullors and Opal Tometi — began to post #BlackLivesMatter on social media and to call for a mass action that affirmed Black lives and confronted institutional racism. The hashtag quickly caught on, providing the growing movement with its battle cry.

“The slogan they came up with is genius,” said the Rev. Isaac Holt of Royal Missionary Baptist Church in North Charleston. “The slogan is bigger than the organization. ... It’s a no-brainer to many.”

The phrase, quickly embraced by many other social justice advocates, also brought about comparisons and echoes of the past.

The phrase is so positive and true that it disarms those who seek to defend the systems and institutions that create and sustain racial injustice, said the Rev. Nelson Rivers III, pastor of Charity Missionary Baptist Church in North Charleston and vice president of religious affairs and external relations of Al Sharpton’s National Action Network.

“The way folks are going after Black Lives Matter, to demonize them, to dehumanize them, is a page from an old playbook,” he said. “The NAACP was outlawed in the ’50s, especially in the Deep South. They linked the NAACP to communism.”

In 1956, the South Carolina Legislature passed a law forbidding state employees to become involved with the NAACP and other civil rights organizations. Educator and activist Septima Clark, who had just become vice president of the NAACP’s Charleston branch and who was employed by the Charleston County School District, was fired from her job after 40 years of teaching and lost her pension.

And the civil rights organizations of the 1950s and ’60s, such as the Student Nonviolent Coordinating Committee and Martin Luther King Jr.’s Southern Christian Leadership Conference, were accused by the FBI of having communist ties.

King was not a popular figure, especially during the last years of his life, nor were other civil rights activists we recall favorably today. They were demonized by the FBI and often viewed with skepticism, concern, even alarm, by members of the public.

“In my mind, Black Lives Matter is a continuation of the struggle for justice,” Rivers said.

That "struggle" has widened to include LGBTQ, immigrant and women’s rights. Just as the Student Nonviolent Coordinating Committee in the 1960s aligned with the labor movement, anti-Apartheid movement, anti-Zionist movement and anti-colonialist movement, so has Black Lives Matter embraced causes other than combatting police violence against Black people.

“We are a collective of liberators who believe in an inclusive and spacious movement,” states the Black Lives Matter Foundation. “We also believe that in order to win and bring as many people with us along the way, we must move beyond the narrow nationalism that is all too prevalent in Black communities. We must ensure we are building a movement that brings all of us to the front.”

Holt, of Royal Missionary Baptist Church, said the decentralized and informal nature of the BLM movement means it’s a big umbrella that welcomes many people, which is good, but that same openness also means bad actors can exploit it.

The movement has been repeatedly accused of fostering violence during protests.

“We’ve got all kinds of people shouting that don’t have any connection whatsoever to organized movements for justice,” Holt said. “It keeps a lot of people away from organized action.”

It’s important that Black people lead the movement for racial justice, he said. And it’s critical for movement leaders seeking to recruit activists to declare loudly their embrace of nonviolence — something allies in the church community can amplify. A manifesto that includes adherence to the principle of nonviolence could help, he said.

A study conducted by The Armed Conflict Location & Event Data Project, a non-governmental organization that tracks conflict around the world, examined 7,750 demonstrations linked to the BLM movement in more than 2,400 locations in all 50 states and Washington, D.C., from May 24 to Aug. 22. The study concluded that the protests were part of “an overwhelmingly peaceful movement.”

“The vast majority of demonstration events associated with the BLM movement are non-violent,” the ACLED report states. “In more than 93% of all demonstrations connected to the movement, demonstrators have not engaged in violence or destructive activity.”

When violence does erupt, it is often triggered by law enforcement or “non-state actors,” mostly right-wing infiltrators, according to the study.

A rising number of counter-protests have turned violent, the report shows.

During the period under review, "over 360 counter-protests were recorded around the country, accounting for nearly 5% of all demonstrations. Of these, 43 — nearly 12% — turned violent, with clashes between pro-police demonstrators and demonstrators associated with the BLM movement.”

Rivers said this is not a new phenomenon. Demonstrations in the 1960s — lunch counter sit-ins, the Freedom Rides, the Birmingham protests of 1963, the Selma-Montgomery March — all were subject to violence at the hands of White citizens and law enforcement.

And most of the civil rights organizations — including SNCC, SCLC and the Black Panthers — were infiltrated by FBI agents and their co-conspirators, he said.

“There are co-opters on both sides,” Rivers said, referring to bad-faith infiltrators and good-faith allies who used the BLM movement to advance other agendas. “Not everybody who is with you is with you,” he tells local young leaders.

On Thursday, Charleston Police released its preliminary report "Strengthening Charleston," an assessment of the police response to the protests and riots of May 30. That afternoon, Black Lives Matter demonstrators took to the streets in protest of the killing of George Floyd by police in Minneapolis; most dispersed as rain came through the area.

"The protests remained generally peaceful throughout the day; however, a criminal element entered the Peninsula in the evening, and took the opportunity to destroy property and engage in wanton violence, both against their fellow citizens and the police," the report noted.

'In the right place'

“We were blamed for the local riots,” McDonald said. “But every single one of my members wasn’t out there that night.”

He said a strictly law-abiding protest is not really a protest, it’s more like a parade. Historically, effective protest involved nonviolent civil disobedience — a purposeful challenge to laws and rules considered unjust.

“I can’t tell anyone how to protest — people express their anger in different ways,” McDonald said. “But if it’s led by me, you’re going to have to do it my way. We have guidelines.”

The protests are the most visible part of the local Black Lives Matter movement, he said. But much effort is devoted to education and economic issues.

McDonald, who majored in finance at the College of Charleston, has participated in food distribution and voter registration drives, and he is scrutinizing high-interest title loans and cash loans that leave African Americans in debt that can ruin them financially, making them ineligible for regular loans.

He is hoping that history curricula in the schools can be transformed and diversified so students learn about far more than slavery and segregation, but also about Black Wall Street, the Haitian revolution and Black entrepreneurship.

He said the food distribution program was modeled after a similar initiative managed by the Black Panther Party in California during the late-1960s and early 1970s.

The BLM Charleston chapter, McDonald said, is linked to chapters in Greenville and Columbia. Together, they are pushing for statewide legislation that would make racial bias audits of police departments mandatory.

“That won’t solve the problems, but at least we’ll know where the problems are, and how to address them,” McDonald said.

Addressing them should include funding cuts, he said. The Charleston Police Department has an annual budget of more than $50 million. Some of that money, McDonald said, could be redirected to address underlying problems that destabilize communities of color.

When Holt hears the phrase “defund the police,” he bristles; he prefers the term “reform,” he said. Good cops should be empowered; bad cops disciplined.

“Even Black people need the police,” he said. “We can’t do what the police do and paint a broad brush.”

Tamika Gadsden, a social justice advocate who leads the Charleston Activist Network, noted that McDonald was building on the work of his predecessor, the late Muhiyidin D’Baha, and that he has the support from a variety of allies, including several Black female civic leaders.

“His ambitions are in the right place,” she said. “He’s still finding his footing, which he should be afforded to do.”

Rivers, who remembers the days of legal segregation, said he has enjoyed meeting with McDonald, Gadsden and other young activists, including Jason Jones of The United Front, Shamekei Gray of the Waylyn Heart Team. Rivers considers himself an experienced elder ready to provide guidance and to avoid getting in the way, he said.

“I really was impressed with their sincerity and the amount of work they’ve done to understand the problems,” Rivers said. “I’m so encouraged. I don’t recall a time since (the 1960s) that so many young people are 'woke'.”