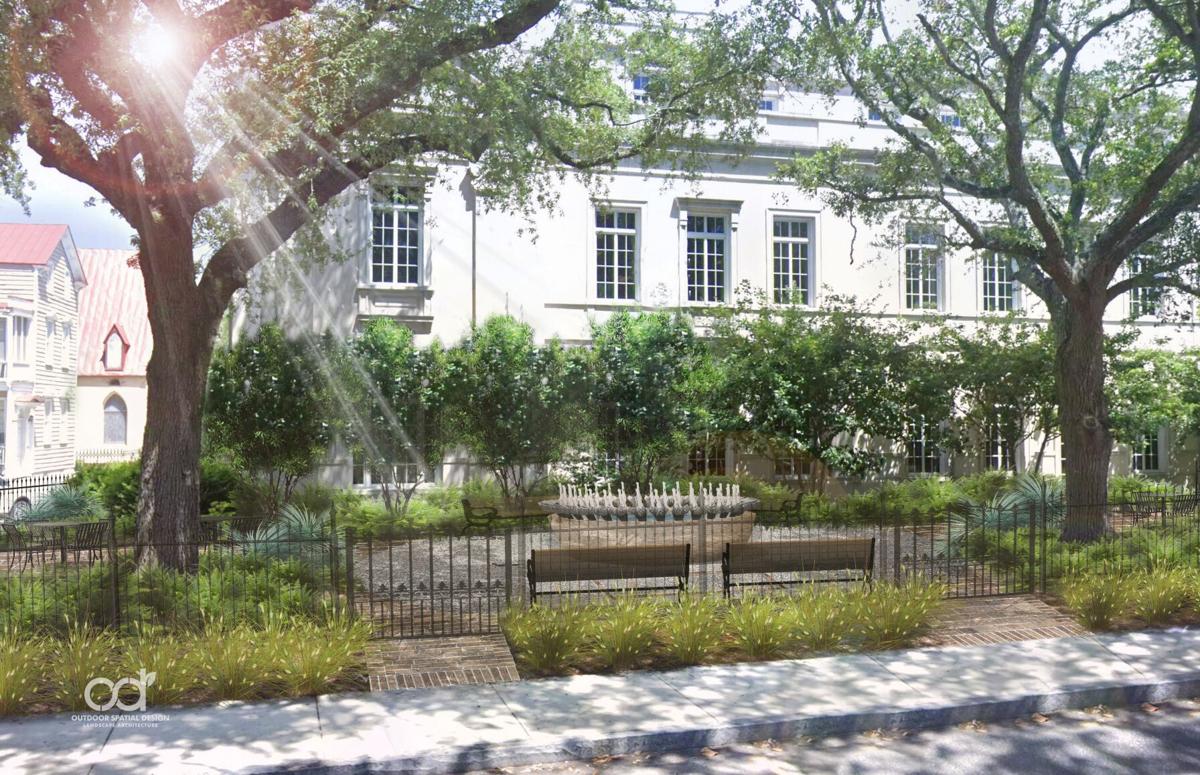 Currently, the site of the Anson Street African Burial Ground, discovered in 2013 during construction of the Gaillard Center, is marked with a temporary plaque. In 2023, a landscaped memorial site, to include a fountain designed by artist Stephen L. Hayes Jr., will become available for public use. This rendering shows the site, located at the southwest corner of the Gaillard Center. Outdoor Spatial Design/Provided 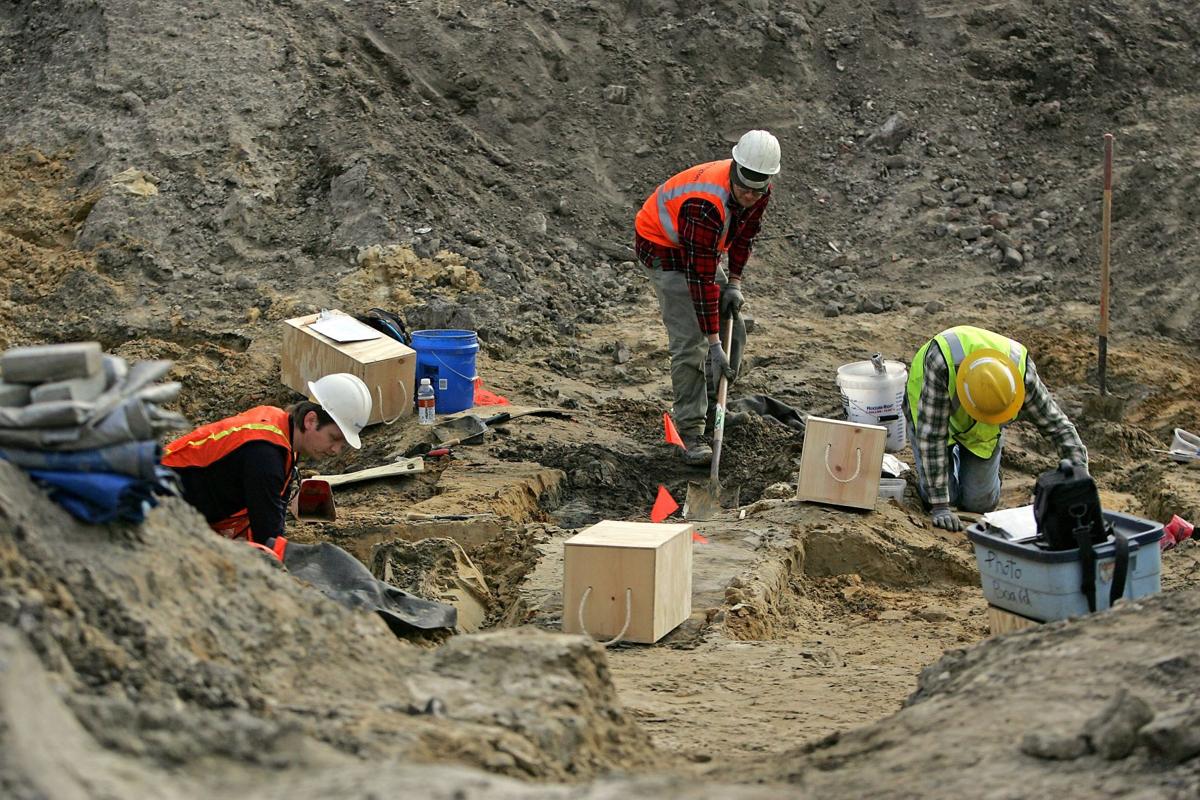 Archaeologists remove human remains from a previously unknown cemetery discovered during construction of the Gaillard Center in 2013. File/Staff 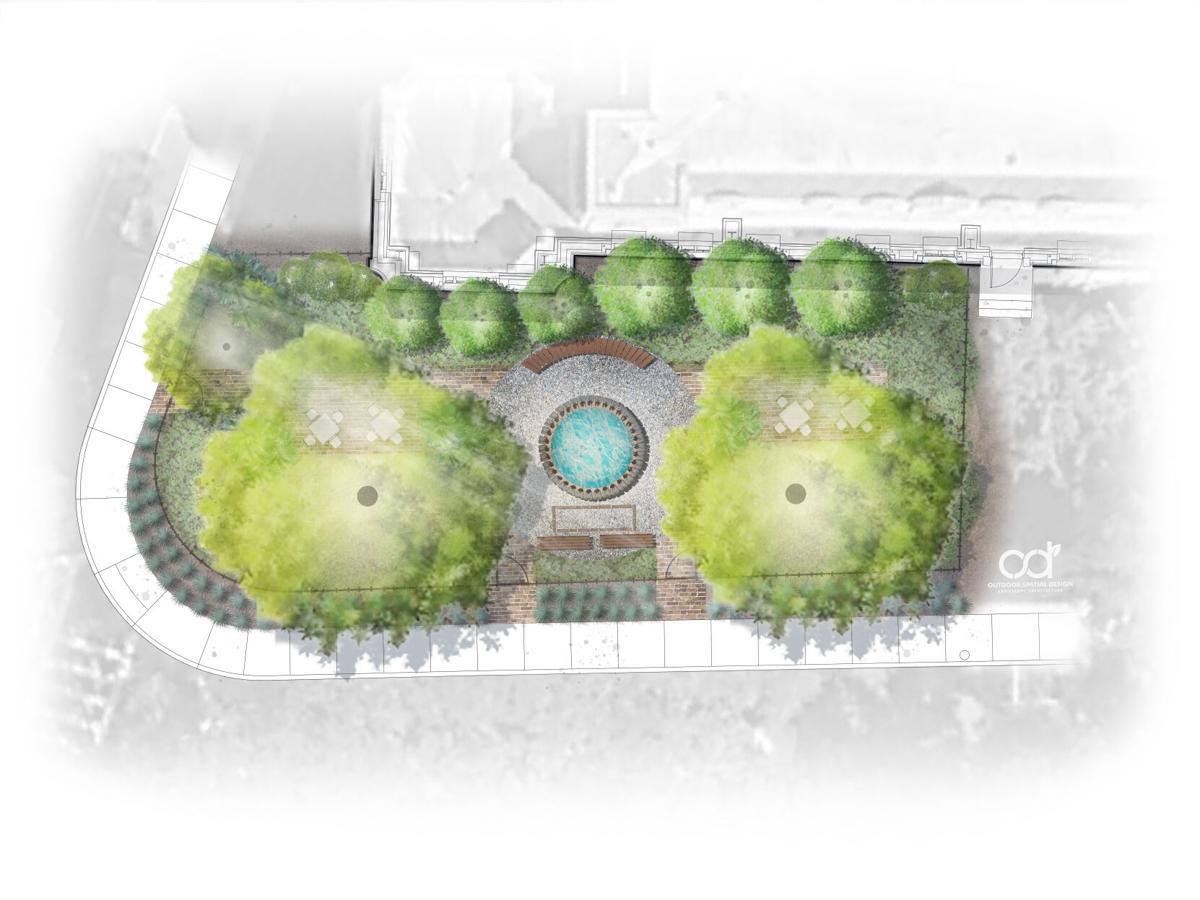 A bird's-eye-view rendering of the Anson Street African Burial Ground memorial site near the Gaillard Center, which is expected to be finished in 2023. Outdoor Spatial Design/Provided 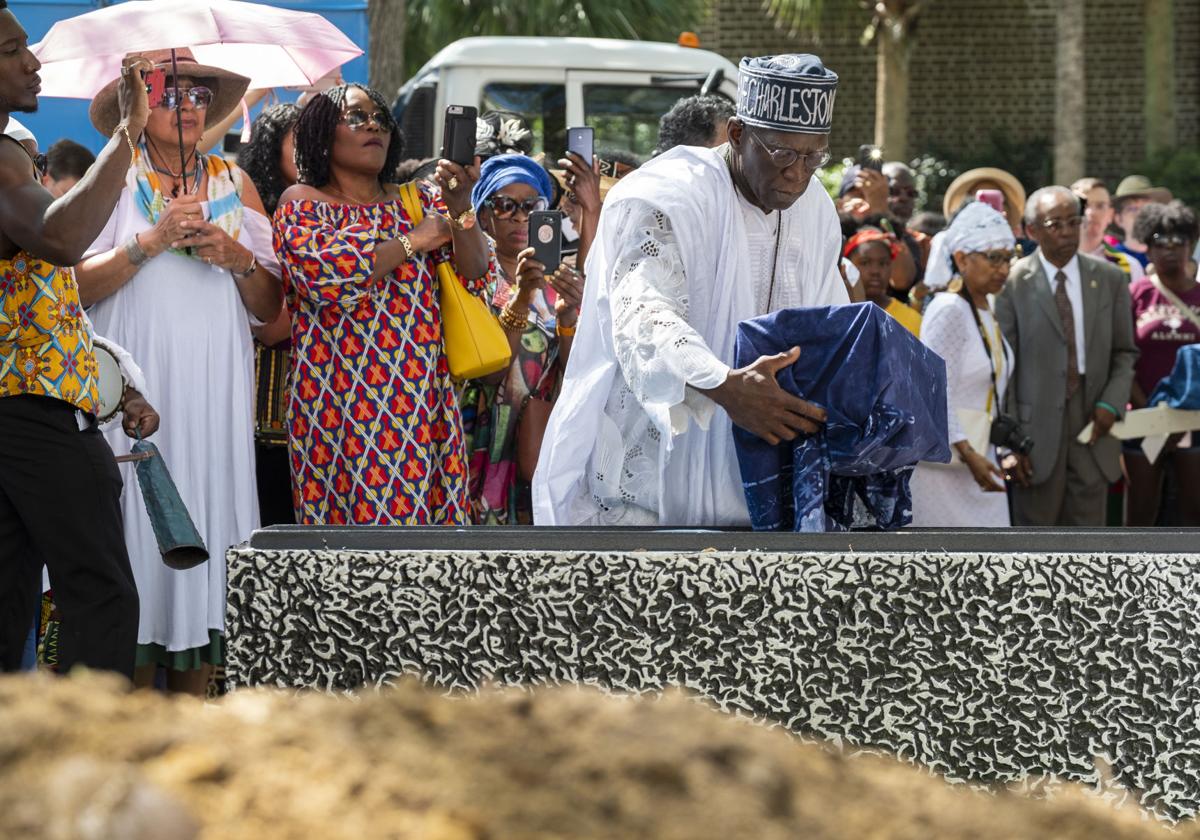 The late Ade Ofunniyin places the remains of enslaved people who were reburied during a solemn ceremony on May 4, 2019. File/Matthew Fortner/Staff 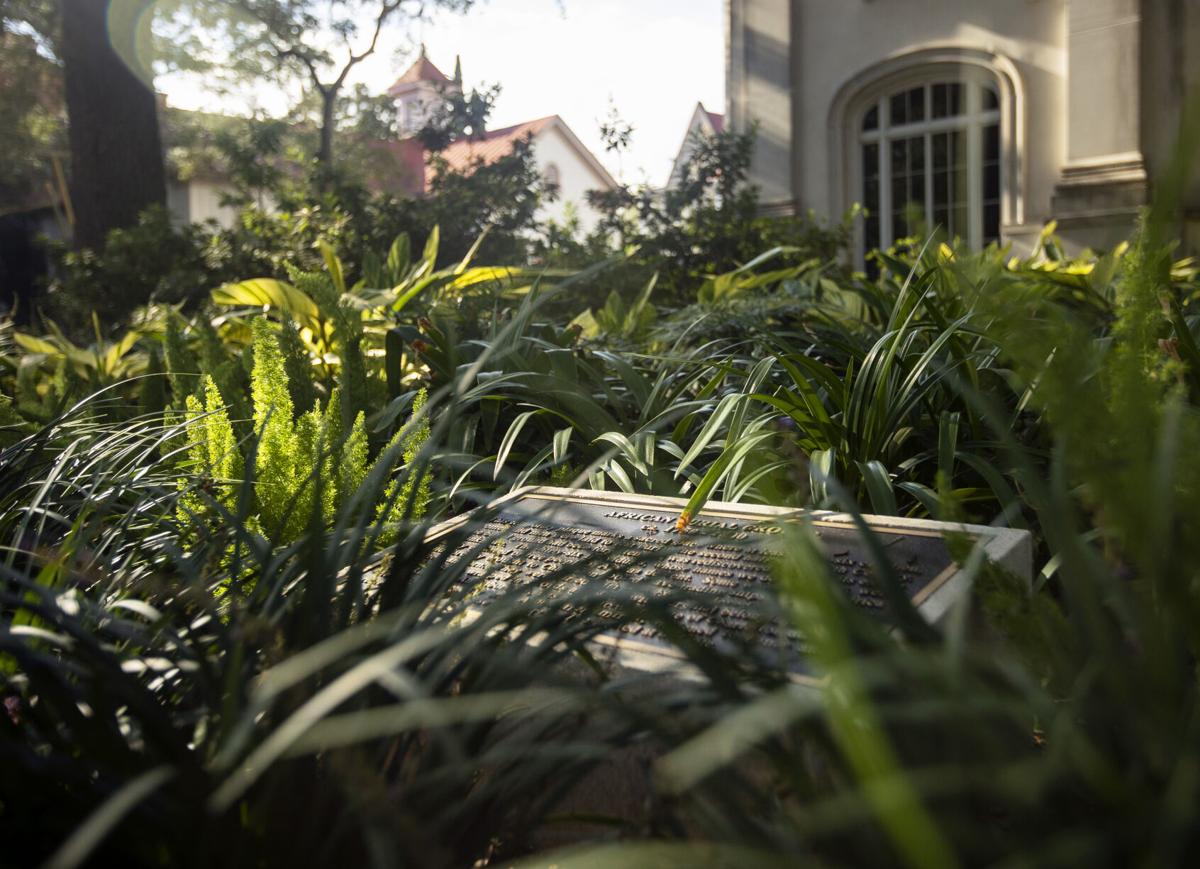 A temporary plaque marking the space where 36 children, men and women were buried sits behind the Gaillard Center on Tuesday, Oct. 11, 2022, in Charleston. The people found were likely enslaved or free people of African descent. The city announced that a memorial will be built to remember them. Gavin McIntyre/Staff 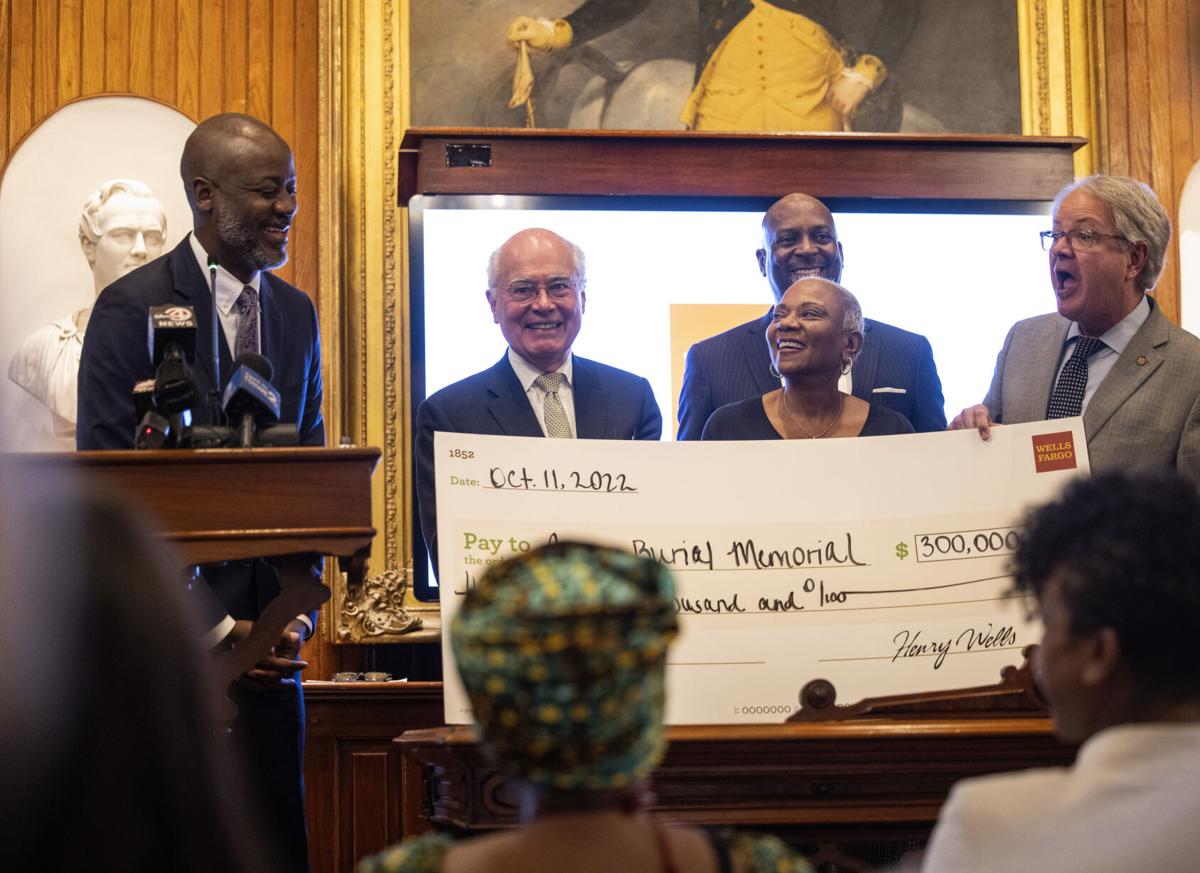 Otis Rolley, president of the Wells Fargo Foundation and head of Philanthropy and Community Impact (left), presents a check worth $300,000 to former General Director of Spoleto Festival USA Nigel Redden, Denny’s Chairman Brenda Lauderback and Mayor John Tecklenburg to go toward the building of a memorial for the 36 people buried at Anson and George streets on Tuesday, Oct. 11, 2022, in Charleston.

A new fountain soon will memorialize 36 people interred between 1760 and 1790 in a small burial ground near what now is the Charleston Gaillard Center.

The memorial fountain, designed by North Carolina-based artist Stephen L. Hayes Jr., is a culminating moment in a decadelong effort to protect and honor the remains — and the legacies — of these enslaved people, six of whom were born in Africa. Twenty-nine were Black people born in the Lowcountry. One has Native American ancestry.

Spearheading the effort is Brenda Lauderback, chairwoman of the board of Spartanburg-based Denny’s Corp., and Nigel Redden, former general director of Spoleto Festival USA. But the collaborative project involves several key partners, including the Anson Street African Burial Ground Project, the city of Charleston, the Gaillard Center, the Gullah Geechee Cultural Heritage Corridor, St. John's Reformed Episcopal Church, the College of Charleston, the Gibbes Museum, the Association for the Study of African American Life and History, and the Preservation Society of Charleston.

City officials and civic leaders shared details about the project during a public announcement on Oct. 11.

Mayor John Tecklenburg said last week the fountain will be "a real tribute to our ancestors, the ancestors of Charleston," and a powerful way to create a connection to early generations of enslaved people in the city.

The sculpture will include 36 pairs of hands cast in bronze around the rim of a concrete basin formed by creating a bowl-shaped depression in the soil near the Anson Street burial ground. A jet of water will project from each pair. The hands will be cast using living models — people from the community selected by Anson Street African Burial Ground Project leaders La’Sheia Oubré and Joanna Gilmore.

Oubré and Gilmore also will coordinate the collection of soil from each of the known and accessible African-descendant burial grounds in Charleston, they said. The soil incorporated into the memorial will symbolize the toil of enslaved and free Africans who were eventually buried in the earth upon which the city was built.

Preservation Society of Charleston gets support for documenting Black cemeteries

The hands will help humanize the monument as well as reference the labor enslaved people were forced to endure — labor that often involved rice fields and flowing water, Hayes said.

“Hands tell so many stories,” he said. And water refers to the cycle of life. It penetrates the ground, then covers the surface, then is absorbed once again.

The memorial fountain, therefore, is a little like a sapling that has erupted from 36 seeds planted deep in the earth long ago, Hayes said.

The idea for a memorial was first introduced soon after the remains had been discovered in 2013. The late Ade Ofunniyin led the initial effort to identify the dead and protect the site, encouraging archaeological and scientific research and conducting ceremonies to pay respect to those lost to time and history.

After pandemic-related delays, the effort was rejuvenated, thanks in part to a committee led by Lauderback, a Charleston resident.

About $800,000 has been raised toward a goal of a little more than $1 million, Spoleto Festival's former General Director Nigel Redden said. Wells Fargo Bank kicked in $300,000 of that this month. An effort is underway to establish an endowment to help with ongoing maintenance costs. The setting for the fountain, a gracious miniature park located at the corner of Anson and George streets, was designed by Steve Dudash of the Navy Yard Charleston.

Those who stroll through the historic part of the Charleston peninsula are likely to admire the beautiful homes, churches and storefronts, but they are not likely to think of the African Americans who built them, often under duress, Redden said.

The Black hands that did the hard work of making the city too often are forgotten, just as the 36 people buried near Anson Street were forgotten.

“These people worked all their lives and at the end they had nothing,” he said. “I hope that this fountain becomes a place of contemplation. ... I think this memorial will be provocative in some way to people just walking through the city.”

Oubré said she hopes to find people who roughly match those whose remains are interred in the burial ground. The hands to be positioned around the fountain basin will reflect the characteristics of the dead, and some will hold replicas of objects found buried with them — coins, pottery shards, beads and buttons.

Hopefully, the people drawn to the memorial will step foot in the Gaillard Center to read about this history, and then show interest in some of the Gaillard’s programming, she said.

“It’s a great way to bring the community into these art locations,” Oubré said. “The community needs to be part of the story.” For details on the effort, visit https://www.asabgproject.com/.

Sterling deVries, the Gaillard Center’s director of education, said her organization is working with the Anson Street African Burial Ground Project to create educational materials for patrons, residents and the 10,000 students who visit the Gaillard each year.

A looping information video, positioned in the lobby, will feature interviews with people involved in the project, such as Oubré and Gilmore.

And the Gaillard will focus on the burial grounds in various education and community programs, including its “Raising the Volume” series hosted by Charlton Singleton and Marcus Amaker as well as its Arts Literacy Pilot Program for middle and high school students, which supplements regular texts and lesson with information about the arts.

All of this is to spur honest and direct conversations about Charleston’s history of slavery and discrimination, deVries said.

“We’re just here to support them,” she said of the burial project leaders. “We can’t take ownership of that space, but we want to take responsibility for it.”

For many African Americans who remember the Ansonborough neighborhood of the 1940s, ’50s and ’60s, when it was predominantly Black, the Gaillard Center is a symbol of discrimination and displacement. Around 100 homes occupied by African Americans were demolished in the mid-1960s to make way for the original Gaillard Municipal Auditorium and nearby structures. Gaillard staff are aware of this history, deVries said. Yet they are committed to inclusiveness and community outreach.

That’s why the Gaillard hosted the Denmark Vesey Bicentenary commemoration, partnering with the International African American Museum and Emanuel AME Church. That's why its website includes this statement: “The Gaillard Center is committed to elevating local and regional voices and partnering with Charleston institutions to reflect the city’s diversity, both on stage and off.” That’s why it seeks to foster “essential dialogue” through its education initiatives.

“When it comes down to it, our institution is for the community, but only a few feel welcome,” deVries said. “We’re trying to change that.”

Lauderback said she hopes the new memorial will draw attention to more than the Anson Street burial ground. The city has many other known and unknown Black graveyards.

“This can represent so many whose stories have never been told,” she said. “It’s important ... to celebrate the people on whose backs the city was built. To have so many unmarked graves and mass graves is part of the history that we don’t love, but we need to bring attention to the truth.” Telling the truth about the past, one project at a time, is how we move forward, she said. “That’s the way you heal, that’s the way you become better.”

Once the memorial is finished, it will become the property of the city.

Tecklenburg said the city is coordinating with the International African American Museum to direct visitors to notable sites of African American history, including the Anson Street memorial, and perhaps to develop a walking tour. For those who embark on a self-guided tour, materials online and in print could soon be available, he said.

The number of sites is growing, he noted. They include the new museum and its outdoor space; Emanuel AME Church and its future memorial to the victims of the 2015 mass shooting; the Susie Jackson Freedom Memorial Garden at the Charleston County Public Library; the old Charleston Work House; the Old Slave Mart Museum; the Robert Smalls historical marker on East Battery; the former Kress building on King Street, which was the site of a 1960 sit-in; the Denmark Vesey statue in Hampton Park; and various cemeteries and burial grounds, such as the one on Heriot Street, that are part of a preservation effort now underway.

The city also hopes to promote minority-owned businesses on the Charleston peninsula, Tecklenburg said. Not many of those are left.

Nearly forgotten Catholic cemetery in Charleston to be protected and renovated

Hayes, who is an art professor at Duke University, and who in 2020 won the Gibbes Museum’s 1858 Prize for Contemporary Southern Art, has designed other memorials, including one called “Boundless,” a monument to the U.S. Colored Troops who fought in the Civil War. The installation features 11 life-sized figures and is located at the Cameron Art Museum — which sits on the site of the 1865 Battle of Forks Road in Wilmington, N.C.

Hayes said he found descendants of the soldiers and Civil War reenactors to serve as models.

“I like to use the body — people — as part of the work,” he said. “It brings in the past with the present, and also the future.”

The children and grandchildren of these models can visit the memorial years from now and see something of their own lives in the work.

Thus the generations are connected by history, and by art.

A new partnership between the Medical University of South Carolina and a national violence-intervention nonprofit is betting on insiders to leverage their credibility on the streets of Charleston and North Charleston to help young people escape the cycles of violence, trauma and retaliation. Read moreMUSC extends violence intervention program beyond hospital's walls

Researchers made their first sighting of a mom whale and new calf at the endangered species' calving grounds in Georgia. The news was met with celebration and dread. On Tuesday, a group petitioned the U.S. government to recognize the deadly impact of boats on the year's calving whales as a legal "emergency." Read moreRight whale 'emergency' in court as researchers spot first mom and calf this season, in GA