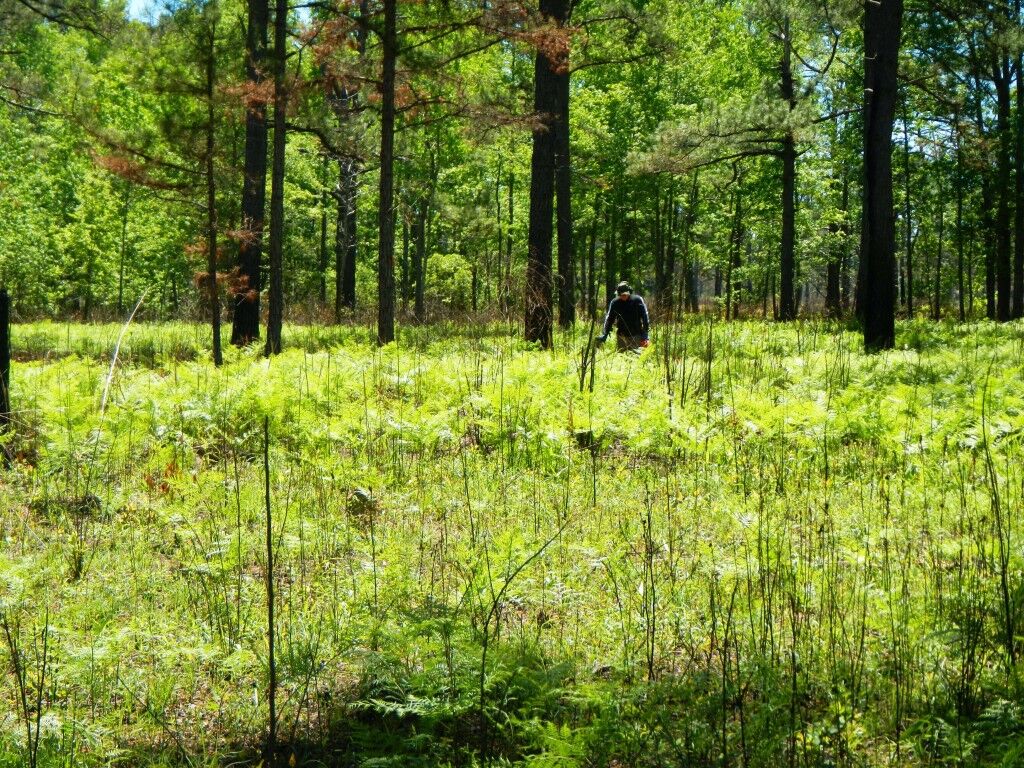 In search of the Battle of Beaufort. South Carolina Battleground Preservation Trust/Provided 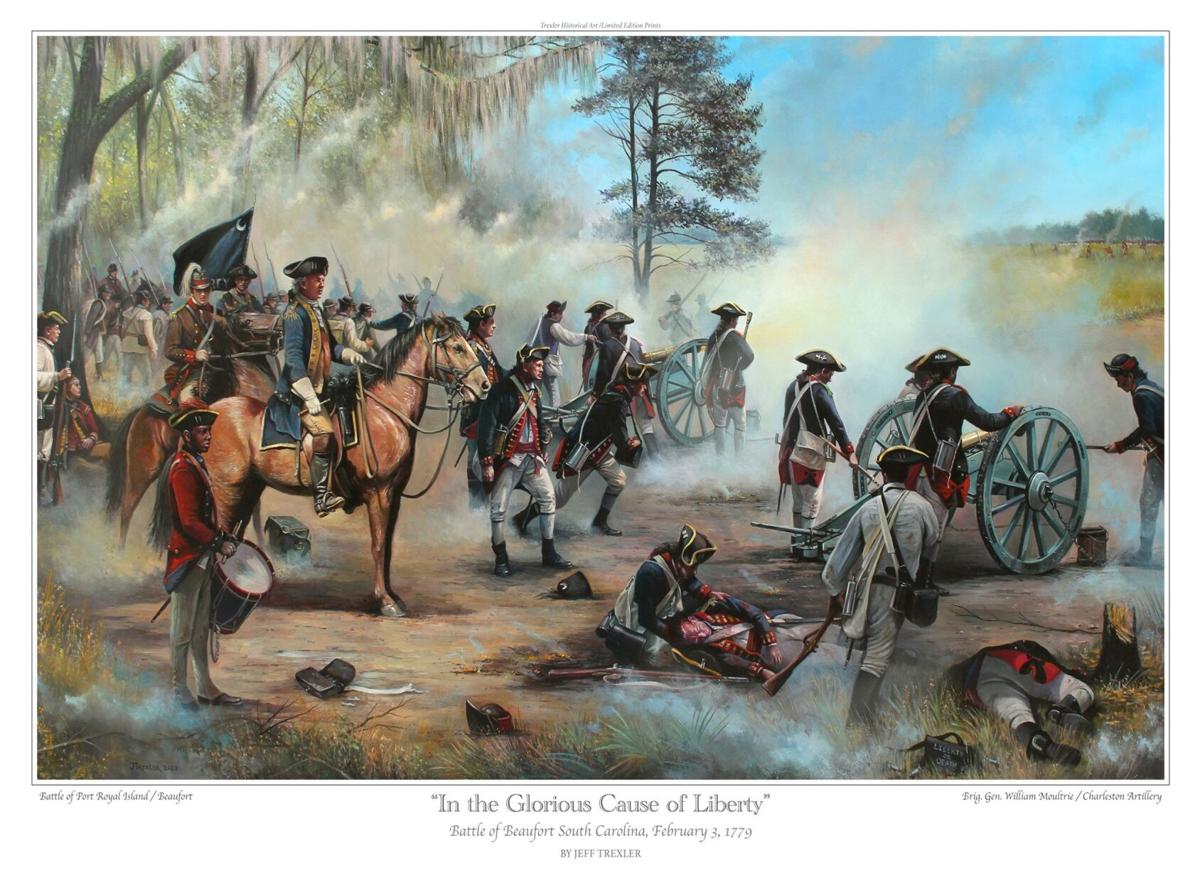 The Battle of Beaufort was an effort by British forces to gain control of a deep-water port and the main thoroughfare from Port Royal to Charleston. This 2020 painting, "In the Glorious Cause of Liberty," is by artist Jeff Trexler. S.C. Battlefield Preservation Trust/Provided 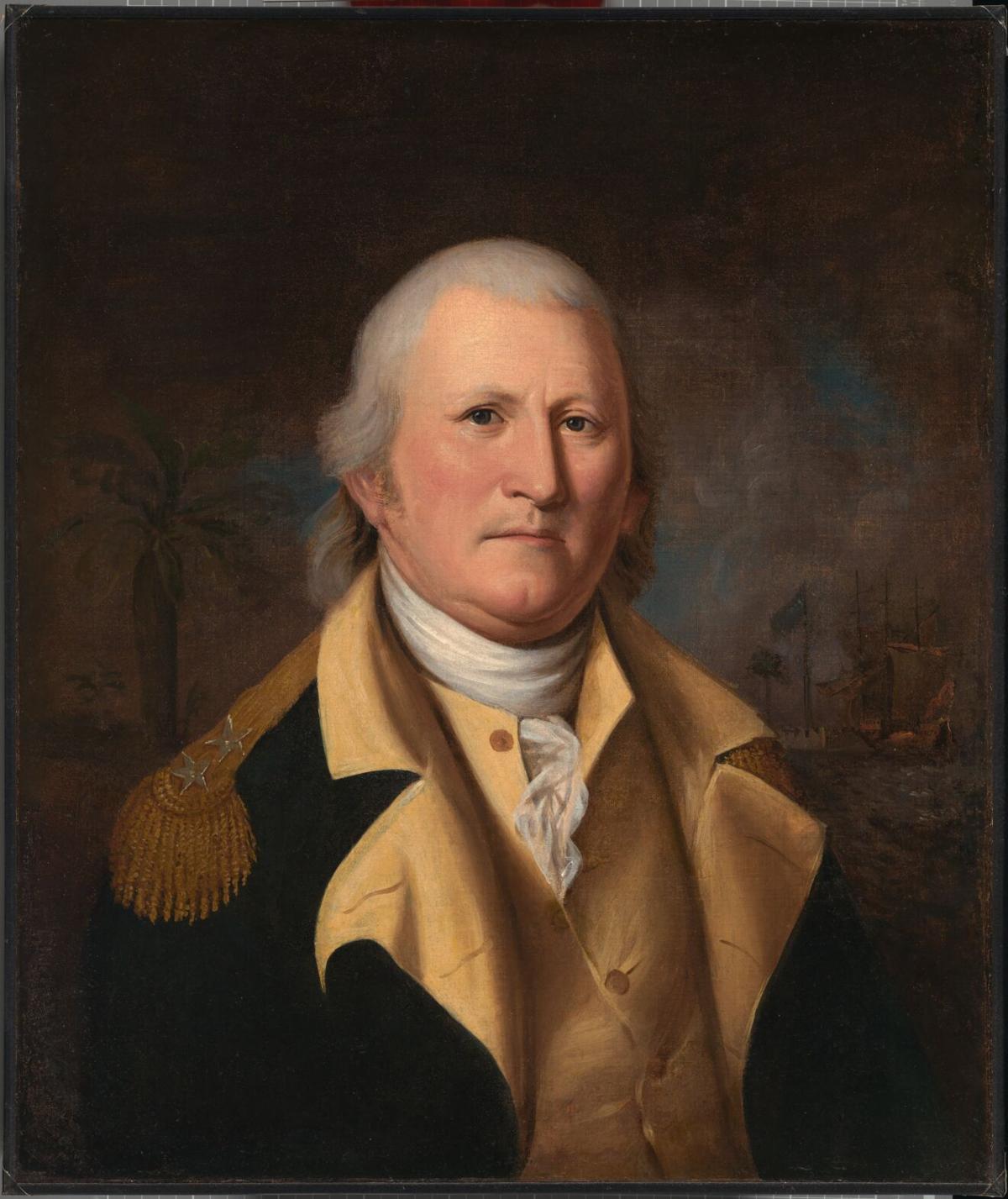 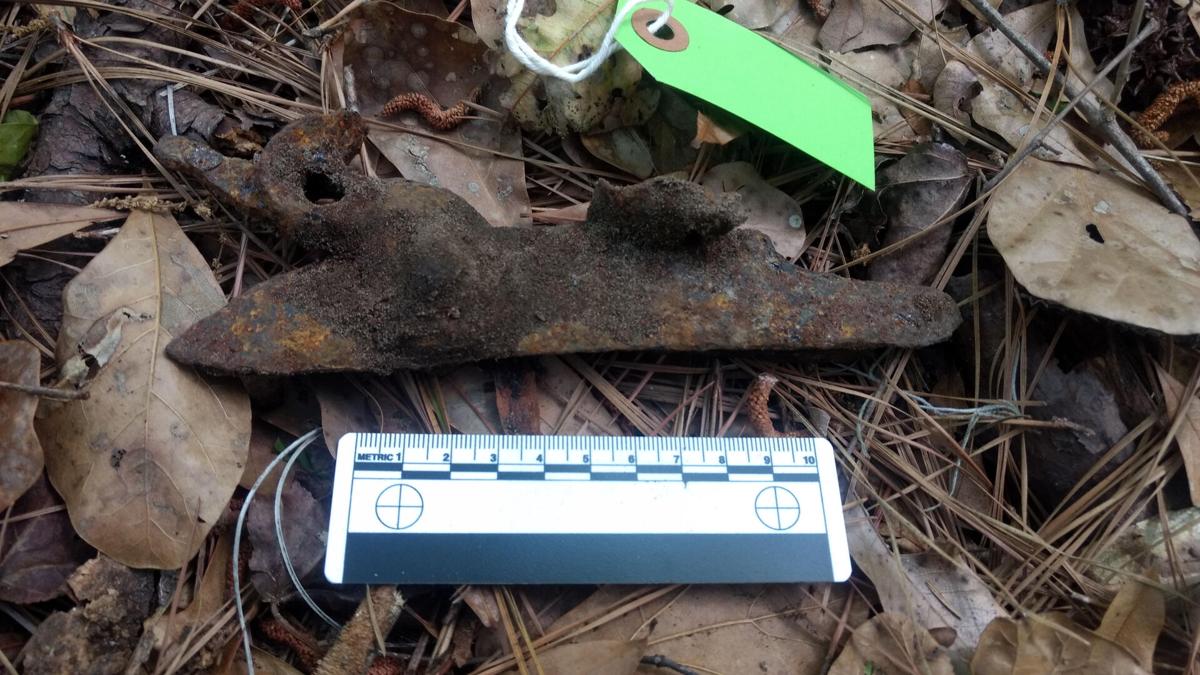 A musket lockplate with the hammer still drawn back in the firing position, found on the site of the 1779 Battle of Beaufort. Daniel Battle/South Carolina American Revolution Preservation Alliance 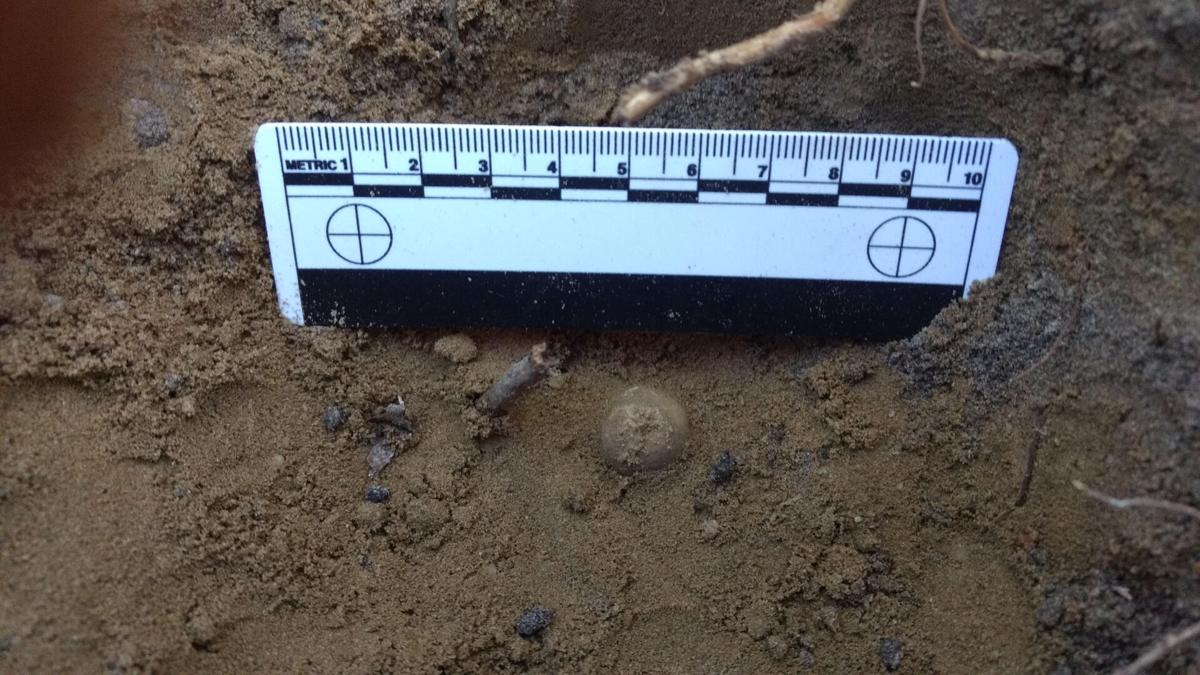 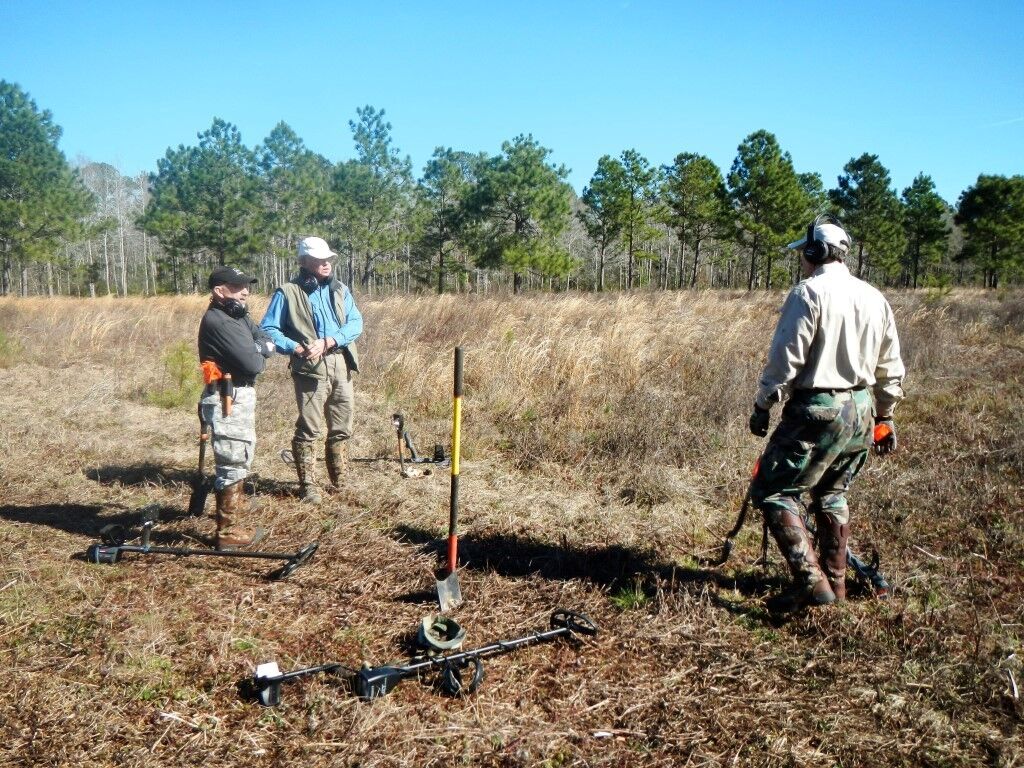 Archaeologists and volunteers in search of artifacts and other evidence that will help them locate the boundaries of the Revolutionary War's 1779 Battle of Beaufort. South Carolina Battleground Preservation Trust/Provided 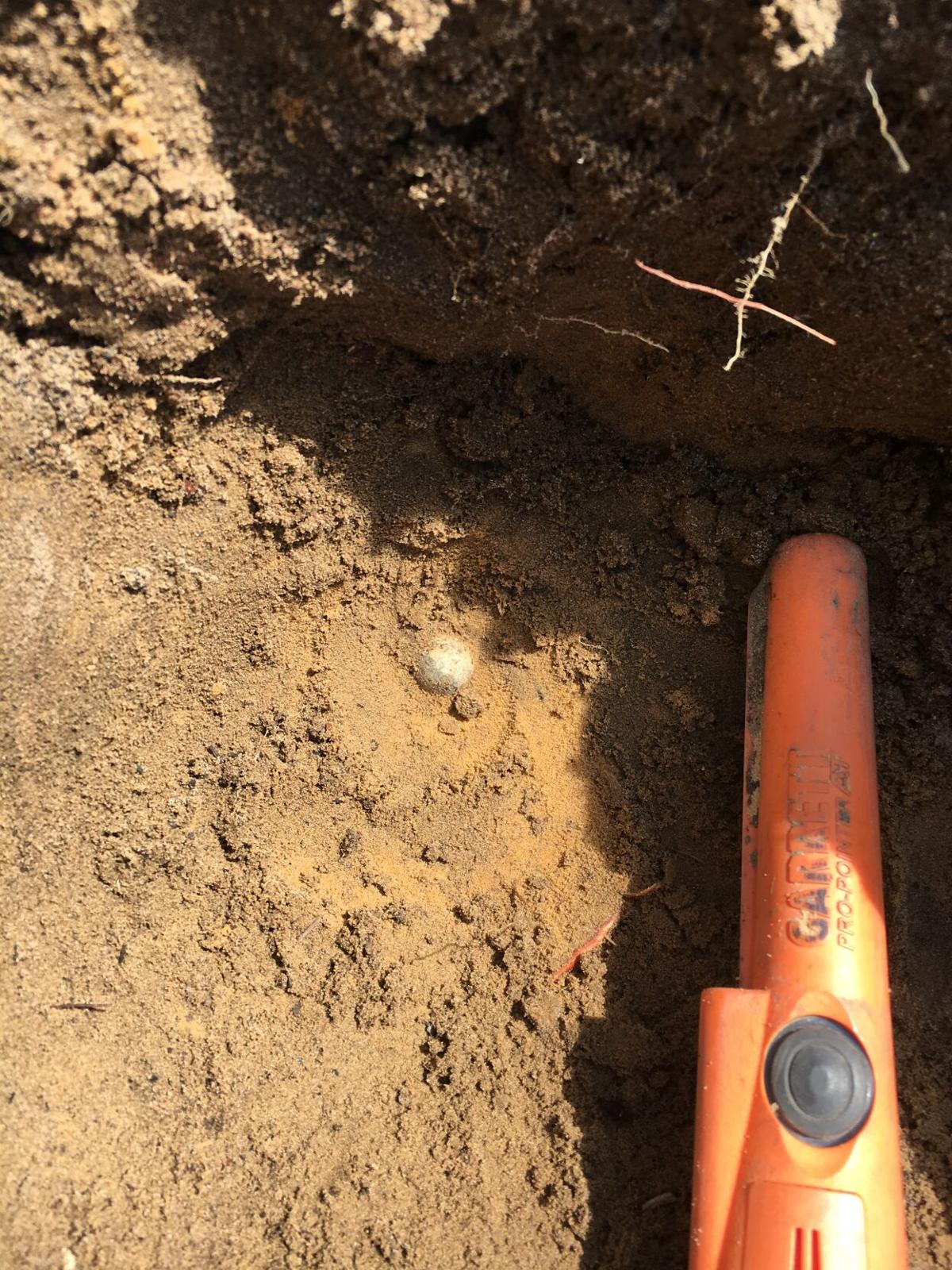 A bit of digging turns up a musket ball fired during the 1779 Battle of Beaufort. South Carolina Battleground Preservation Trust/Provided

In search of the Battle of Beaufort. South Carolina Battleground Preservation Trust/Provided

Archaeologists and volunteers in search of artifacts and other evidence that will help them locate the boundaries of the Revolutionary War's 1779 Battle of Beaufort. South Carolina Battleground Preservation Trust/Provided

A bit of digging turns up a musket ball fired during the 1779 Battle of Beaufort. South Carolina Battleground Preservation Trust/Provided

BEAUFORT — The first big battle of the Revolutionary War between Southern Patriots and British naval forces preserved Fort Sullivan thanks to the strategic use of palmetto tree trunks and sand that neutralized the king's cannonballs.

The British had hoped to quell the Colonial uprising by seizing control of major coastal cities, but Col. William Moultrie’s successful command of his 400 fighters resulted in heavy damage to the warships at Charleston Harbor’s entrance, causing the fleet to retreat.

It would be nearly three years before the British tried again in the South. They were determined to take Charleston but by a less direct path.

That second attempt would succeed but not before an important land battle — the Battle of Beaufort at Port Royal Island — pitted British forces against their old nemesis, Col. Moultrie. This was the first serious land battle of the war in South Carolina and its first American victory.

Recent fieldwork led by Daniel Battle of the S.C. American Revolution Preservation Alliance has enabled the archaeologist to determine the exact site of the fight, prompting the S.C. Battleground Preservation Trust to secure a portion of the property for future historic interpretation and inclusion in its “Liberty Trail” project.

The old battlefield straddles S.C. Highway 21. The Marine Corps Air Station Beaufort occupies a big chunk of the historic site. The portion on the other side of the highway, which includes a shuttered pillow factory, now is protected by a conservation easement held by the Trust. Beaufort County, which helped purchase the land, controls the deed.

The Navy and the S.C. Conservation Bank, and a grant from the National Park Service’s American Battlefield Protection Program, provided additional funding for the project, the first to dig deep into the history of this fascinating 1779 confrontation.

“Protecting the (Battle of Beaufort) site is an important step toward the goal of securing our state’s Revolutionary War legacy and making our history available for the public,” said Raleigh West, executive director of the Conservation Bank.

That’s the precise mission of the Battleground Preservation Trust.

“It needs to be a passive park, with outdoor site interpretation,” Executive Director and CEO Douglas Bostick said. “But we’ll complement that by tying it into the Liberty Trail app that we’re working on for entire trail.”

The app allows users to access all kinds of information about a variety of Revolutionary War and Civil War battles in the state. It’s meant to be a portable, electronic guidebook, replete with histories, biographies, maps and other information.

“It’s an important battle,” Bostick said. “We want people to come there and have an appreciation for why it matters.”

Lawrence Rowland, professor emeritus of history at the University of South Carolina Beaufort, said the first two years of the Revolutionary War were almost entirely fought in the North. The British, who maintained a large garrison in Florida, expanded their efforts to quell the Colonial uprising in 1778. Their forces moved up the coast, first taking Savannah, then searching for a deep-water port they could control. From there, they would approach Charleston by sea and by land.

Along the way they looted and burned properties and encountered some resistance, but nothing the British couldn’t overcome.

Until they came to Port Royal.

British Brig. Gen. Augustine Provost knew that the King’s Highway (today, Savannah Highway) was the most direct route to Charleston, but he and his forces of about 250 men ran up against Moultrie and a militia infantry with an advantage: it possessed more manpower, two 6-pound cannons and one 2-pound cannon with 40 rounds.

A single British howitzer cannon was insufficient against such firepower, and was disabled early in the confrontation. When the smoke cleared, 40 British soldiers were dead or wounded; eight Patriots were killed and 22 wounded.

Rowland said Patriot militia forces typically adhered to a form of guerrilla warfare, relying on surprise and seeking geographical advantage in the woods or on high ground, for example. This was the first time they faced off with British regulars in a set-piece battle. And they won. 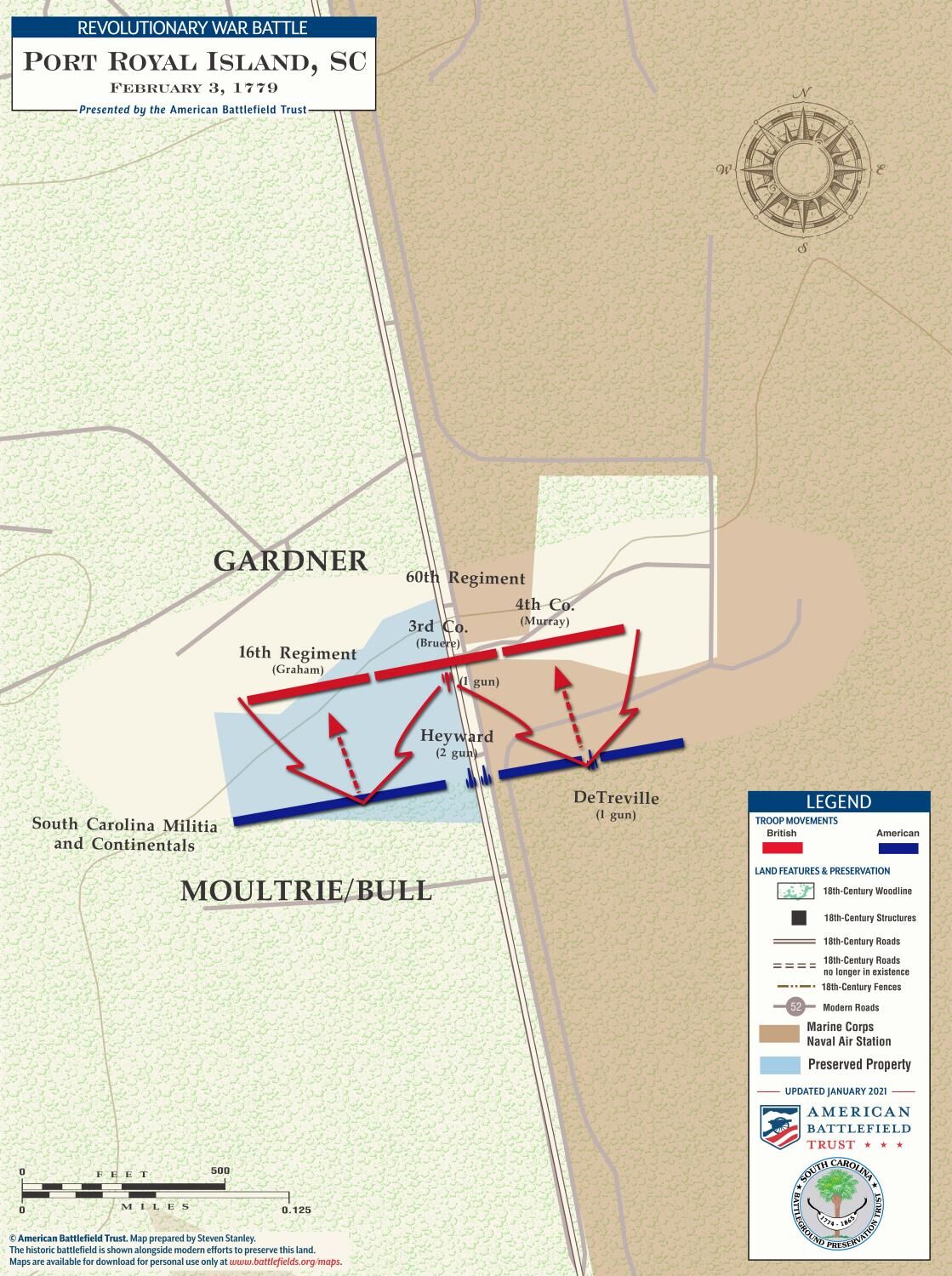 The fight only delayed the British, who soon would force their way north and lay siege to Charleston at the end of March 1780. But it's important from a military standpoint, Rowland said. And it surely boosted the morale of the Americans, who gained a small taste of victory.

Among the Patriots were two signers of the Declaration of Independence: Capt. Thomas Heyward Jr. and Capt. Edward Rutledge, both of whom commanded artillery. John Barnwell, who would go on to serve in the state Senate, and eventually get a county named for him, also was there.

Lushington Company, named for Capt. Richard Lushington, was a volunteer infantry corps organized to defend Charleston. It joined the fight near Port Royal, too. The regiment first was formed in 1738. By the time of the Revolutionary War, it consisted of 80 to 100 men, including many Jewish volunteers, according to Dale Rosengarten, director of the Jewish Heritage Collection at the College of Charleston Library, who cited James William Hagy’s 1992 book “This Happy Land: The Jews of Colonial and Antebellum Charleston.”

They left Charleston on a Saturday — Jan. 23, 1779 — met the British that Wednesday, and quit the battleground on the following Saturday, having suffered some casualties, including the death of Joseph Solomon.

It’s thought that about 4 percent of all country militia members in South Carolina were Jewish.

Battle said he began his archaeological work more than three years ago, first identifying the roads used in the late 1700s and referring to the historical record to zero in on a possible location. Before long, he found debris typical of a battlefield of that period: musket shot, canister shot and more.

Then he recruited colleagues to spend a day on the wooded property in search of the battle’s boundaries, he said.

John Allison, a money manager by day and accomplished amateur archaeologist in his spare time, joined the effort.

“We finally decided that U.S. Route 21 was in fact the old road during the Revolutionary War period,” he said. Next was to find the area that was once swampland, according to LIDAR scans, that use lasers to reveal hidden details in the landscape. Then the artifacts started to turn up.

All of this scanning and searching helped the archaeologists determine not only the site of the battle but also where the two sides were positioned and where their guns were located.

“Artillery really played a big role in that battle,” Allison said. “We know where people stood (and) what kind of weapons were used.”

Battle said he re-created lead-shot explosions from canisters in a successful effort to match materials and refine the team’s understanding of the weapons used. A careful examination of the debris field suggests the British and Americans stood about 250 yards apart when the first shots were fired.

Among the Patriot fighters during the Battle of Beaufort were several Black people, including a 36-year-old enslaved man who had labored on a plantation near Bull’s Island, then served throughout the American Revolution as a drum major. Jim Capers enlisted in the 4th Regiment of the South Carolina Militia, commanded by Francis Marion, in 1775, and saw action at the battles of Savannah, Port Royal/Beaufort, Camden, Eutaw Springs, and Biggins Church, Rowland said. He was at Yorktown to witness the surrender of Lord Cornwallis.

His role was essential. Drummers conveyed military commands, directed troop movements and issued rhythmic warnings and other signals. They were located in the thick of the action, within earshot of the officers. They had no access to muskets or cannons to defend themselves. Enemy forces were eager to disable them.

Capers was no stranger to injury. At the Battle of Eutaw Springs, he endured saber cuts to his face, a sword strike to his head and the burning pain of a musket ball passing through his body and killing the drummer next to him, according to information provided by the Battleground Preservation Trust.

After the war, Capers returned to Christ Church Parish and found freedom. He moved with his wife to Alabama where he died in 1853 at age 110.

“I hope to see a monument to Capers out there,” Battle said of the secured historic site. “He deserves one.”

Too few people appreciate the diversity among Patriots who fought in the American Revolution, he said.

“This bridges the gap,” Battle said. “I’m hoping that he will be the diplomat that helps bring people to the table, to feel included.”

For all Americans have a stake in this history.

The S.C. Department of Health and Environmental Control reported fewer than 6,000 new cases of COVID-19 and 58 new deaths the week that ended Feb.4.  Read moreSC reported COVID-19 cases continue to decline but deaths from the virus persist