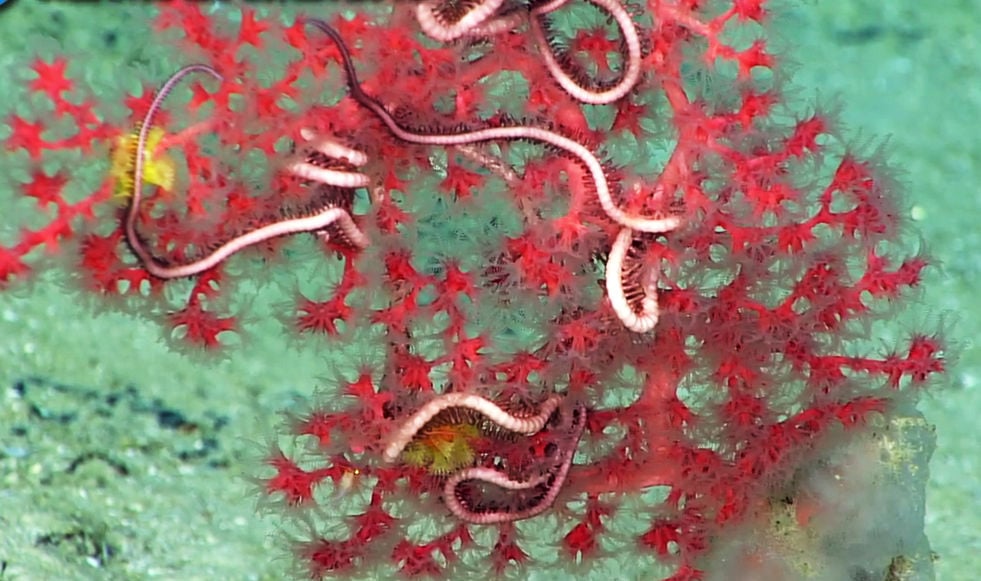 Vividly colored sea stars and sponges have been found on a bottom too dark for colors to be naturally seen, two miles deep more than 100 miles offshore Charleston. NOAA Office of Ocean Exploration and Research, Windows to the Deep 2018. 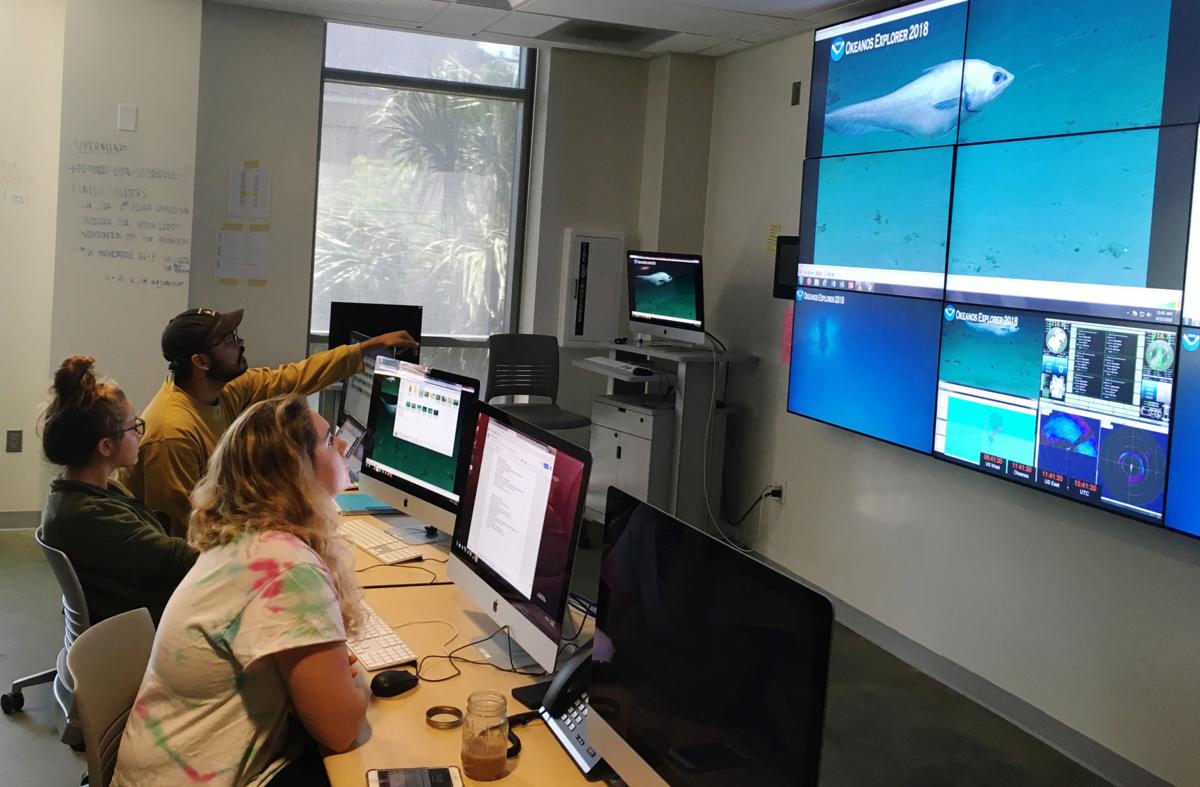 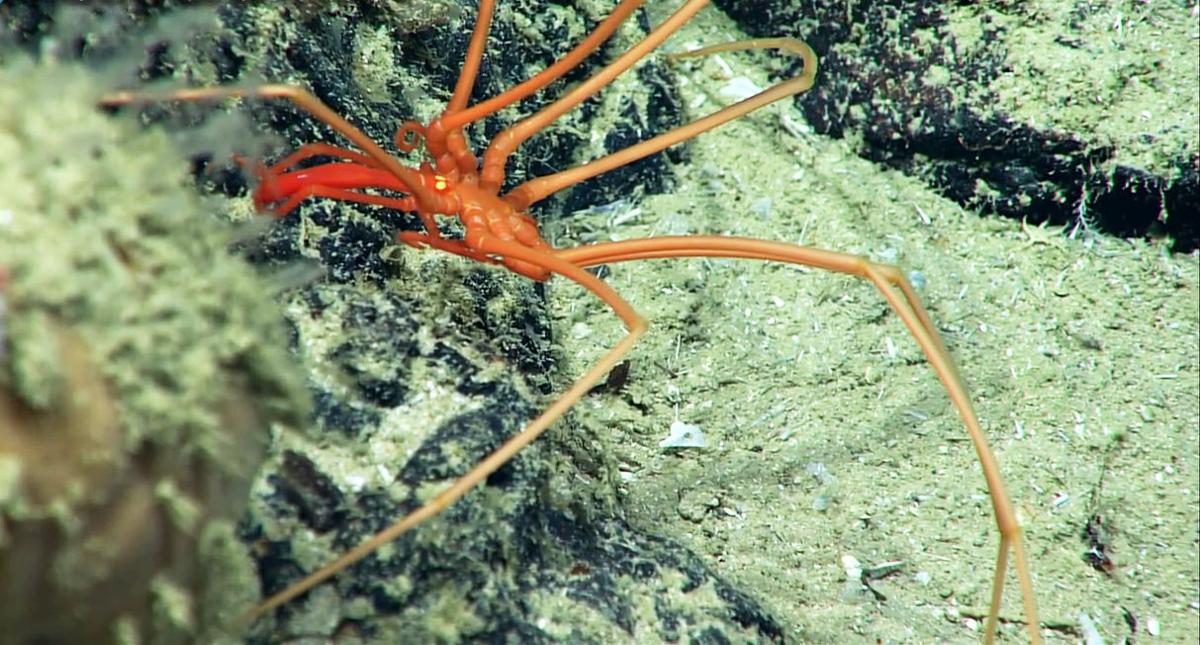 Spidery looking creatures comb the bottom two miles deep in the ocean off Charleston. NOAA Office of Ocean Exploration and Research, Windows to the Deep 2018.

Vividly colored sea stars and sponges have been found on a bottom too dark for colors to be naturally seen, two miles deep more than 100 miles offshore Charleston. NOAA Office of Ocean Exploration and Research, Windows to the Deep 2018.

A Brittle Starfish suddenly appeared, swimming just off the seafloor more than a mile deep and 100 miles off South Carolina, pumping its octopus-like arms.

The gasp from around the world was audible. None of the leading researchers watching on the interactive feed had ever seen a Brittle Star swim before.

That was just one surprise last week from the first day's dive by a robot sub aboard the Okeanos Explorer.

"No one's ever seen this. It's never been videoed. Some of this stuff has never seen light," said Trey Gillespie, the College of Charleston senior who is running a video hub at the school to collect images, video and data for studies.

The Okeanos, a National Oceanic and Atmospheric Administration research ship, is offshore the Southeast coast until the end of June on a three-week exploration of exotic creatures, striking rock formations and spewing methane vents.

The ROV's camera feed is being live-streamed when it is operating, tentatively between 8:30 a.m. and 4 p.m. each day, for the world to watch.

On Friday, the sub was 2 miles deep and 200 miles offshore on a ridge of the Blake Escarpment, possibly as deep as an ROV has ever gone off the Southeast coast.

Saturday, the ROV was scheduled to explore megaripples, a series of dunes 100 feet high and 200 feet long piled by swift bottom cross-currents from as far as the Arctic and Antarctic that wash into each other there. Later in the trip, the sub will explore canyon cliffs and a suspected World War II shipwreck site.

The ROV has a found world richer than even the researchers expected, studded with exotic anemones, hermit crabs, sponges that appear like tiny orange trees wrapped in the red tentacles of sea stars, tri-pod fish standing with three fins on the sand, and cod-like rattail fish that are some of the oldest species on the planet.

The video images are so sharp you feel like you are crawling across the bottom. The colors are vivid at a depth so dark they would seem unnecessary. Even the veteran scientists were reduced to wows.

"Hopefully, this dispelled any myths about the barren, lifeless seafloor," said Leslie Sautter, a geology professor at the college who is aboard the Okeanos as the marine geology leader. Invertebrate animals were found attached to nearly every exposed rock surface the sub closed in on, she said. And they often had several organisms living on them.

"I didn't know something like this existed," said Sophie Alpert, a hub team member, who is a graduate of the college now researching water quality by remote sensing.

It fascinated Gillespie, who was aboard the Okeanos earlier this spring mapping from the surface the bottoms the sub is exploring.

"Until you see something like this, it's not real, and it goes against what you imagine the bottom would look like," he said. "The collaborative science at work here, we're watching a live feed that's being broadcast all over the world."

Gillespie's group at the college is a BEAMS research team. BEAMS stands for Benthic Acoustic Mapping and Survey Program.

From 10 a.m. to 2 p.m. each day, the team will be in Room 207 of the School of Science and Mathematics at Calhoun and Coming streets. The conversations among the scientists aboard and researchers around the world is being texted and played audibly. The sessions are open to the public.

The "Windows to the Deep 2018" expedition by the Okeanos is estimated to cost $600,000, paid from the budget of NOAA's Office of Ocean Exploration and Research.

To watch the robot sub in action, visit https://oceanexplorer.noaa/okeanos.