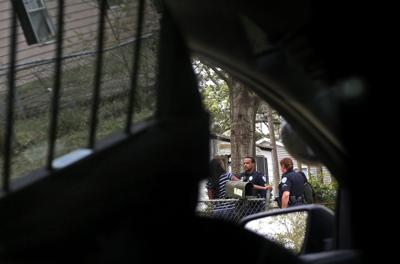 One morning in July, children as young as 5 arrived at summer camp and found their path blocked by a string of yellow tape and police cruisers.

The body of a 17-year-old boy lay crumpled about 200 feet away in the front yard of a home. He’d been shot dead in a robbery attempt.

The young campers couldn’t contain their curiosity. "Who was killed," they asked. "Do I know him?"

Many probably did. The camp sits in an urban swath of North Charleston defined by its reputation for drugs and violence. These kids call it home. They and their families try to lead normal lives amid such abnormal circumstances.

The area lies on the southern end of the state’s third-largest city, just beyond the din of Interstate 26. Here, an industrial stretch of Dorchester Road separates two sprawling neighborhoods. Tucked behind a smattering of car repair shops, convenience stores and extended-stay motels, Dorchester Waylyn and Dorchester Terrace are home to more than 2,000 families.

Predominantly black and working class, the Waylyn and Terrace neighborhoods are lined with simple, single-story houses built in the 1940s for Navy Yard workers. The homes sit close to one another, their small yards sectioned off by chain-link fences. It’s often in the streets outside that things go wrong.

Four people died here in homicides in 2016. Eight more have been shot and killed so far this year.

The two neighborhoods are home to more than 2,000 families. 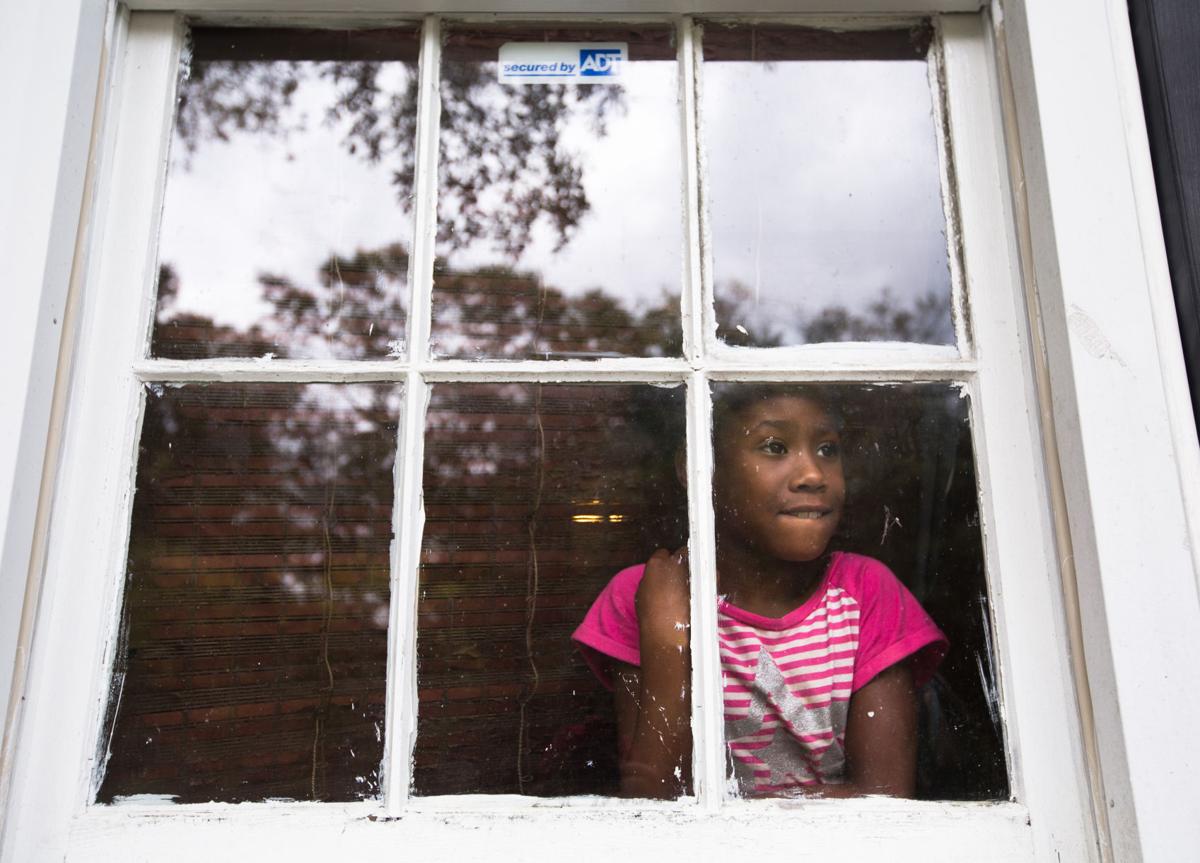 Shamariah Jones, 8, looks out a window in her stepmother Tanang Williams' home in the Dorchester Waylyn neighborhood in July. Shamariah spends her summers in North Charleston and lives in Columbia. Michael Pronzato/Staff 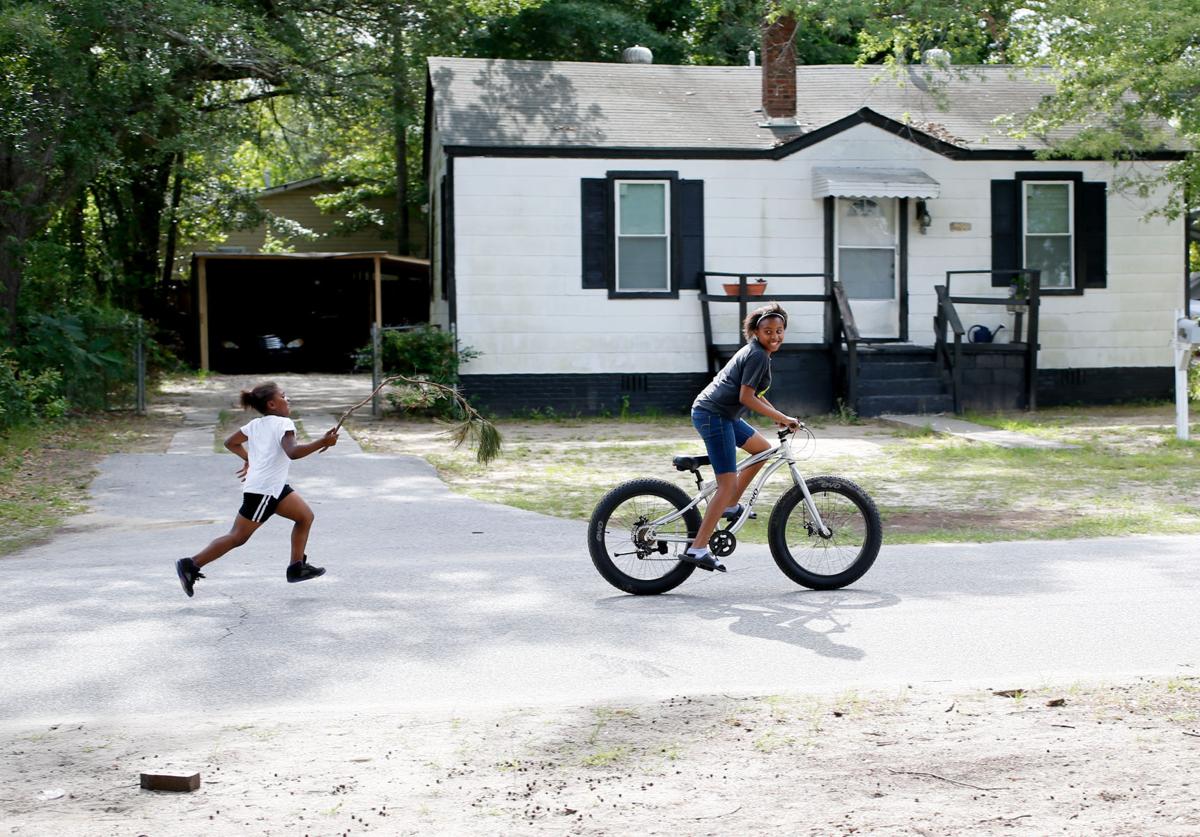 Madison White chases her stepsister Cristina on a bike in the Dorchester Waylyn neighborhood in May. Michael Pronzato/Staff 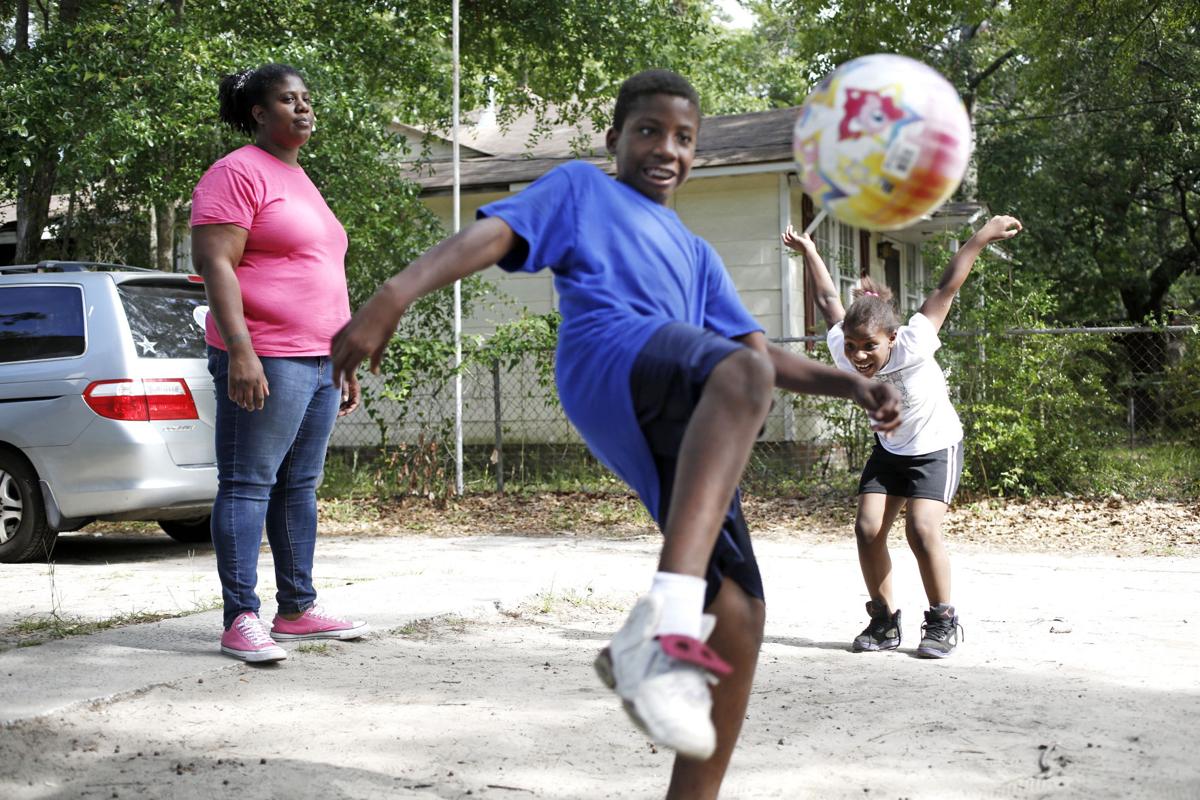 Jessica White watches her children Tra'Sean and Madison play in their front yard in the Dorchester Waylyn neighborhood in May. Michael Pronzato/Staff 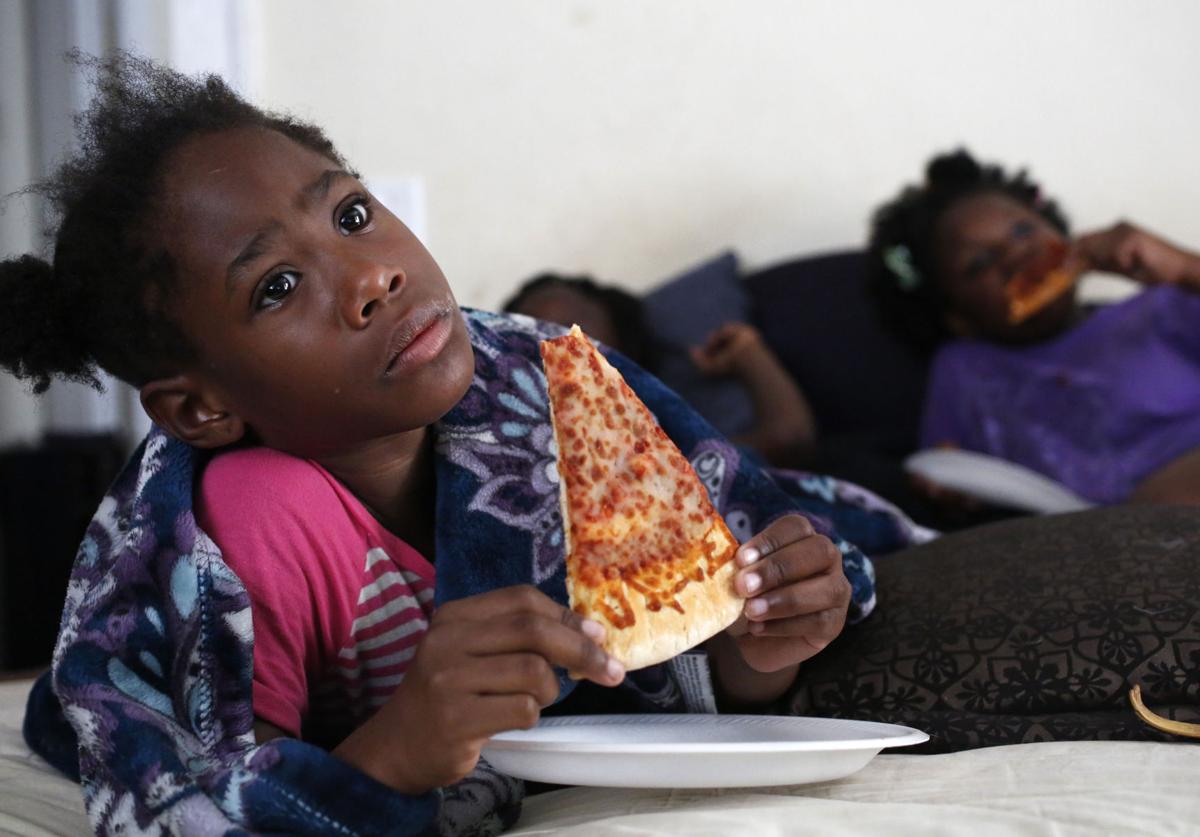 Shamariah Jones, 8, eats pizza for breakfast, which she also had for dinner the previous night, as she watches "Smurfs: The Lost Village," in her stepmother Tanang Williams' bed with her brother Sheldon Muse, 12, and friend Mackenzie Page-Prizzie, 10, in July. Michael Pronzato/Staff 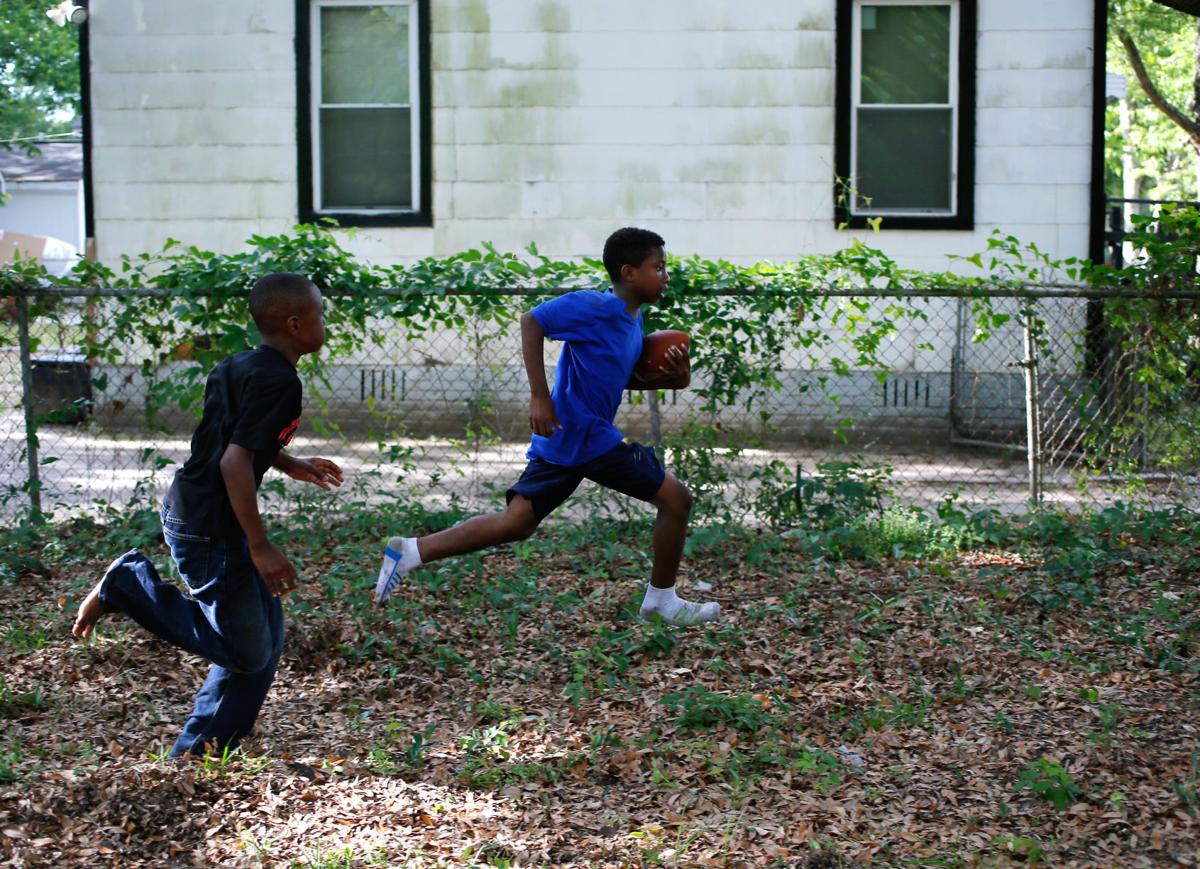 Tra' Sean White, middle, plays football with his friends in a vacant lot across the street from his home in the Dorchester Waylyn neighborhood in May. The city plans to build a playground and basketball court on the lot. Michael Pronzato/Staff

Many residents say the area is unfairly judged by this bloodshed, that the violence overshadows the good that strives to blossom here. But most folks also have a story about how gun violence has affected them, either directly or indirectly. Their testimonies are reminders that the toll of shootings ripples and reverberates, leaving collateral damage in its wake.

The fatal shootings here came amid one of the deadliest stretches on record for North Charleston, a leader of homicides in a state that ranks among the nation’s worst per capita for gun deaths. Thirty-two people have been slain across North Charleston so far this year, tying a record set last year for the most killings in the city’s history.

A quarter of this year’s killings occurred in the Waylyn and Terrace neighborhoods. The city’s first killing of 2017 came just an hour into the new year when a 21-year-old man was gunned down outside a brick convenience store on the edge of the Terrace.

In the months that followed, The Post and Courier regularly visited these two communities to find those who live in the shadows of such headlines. Residents shared stories of transience and loss, grief and determination, hope and survival.

A grieving mother trapped in a bullet-pocked home after her son’s death. An aspiring rapper counting on music to lift him from the streets. A determined leader working to turn her neighborhood around. An ex-con trying to move beyond the dangers his generation helped create.

Their stories and others form a patchwork that knits these neighborhoods together even as gun violence threatens to pull them apart.

The ones who have lost children.

After her son is shot and killed, grieving mother's home bears constant reminders of tragedy

Paint peels around a hole in the kitchen wall beside a bottle of syrup and a bag of flour. T…

The ones who lead.

The house reeks of smoke. A thick film of soot coats the walls. The oak cabinets above the s…

The ones who navigate staying on the right path.

Carolina Kutz buzzes with activity on a summer afternoon.

Aspiring rapper hopes music can lift him from the streets