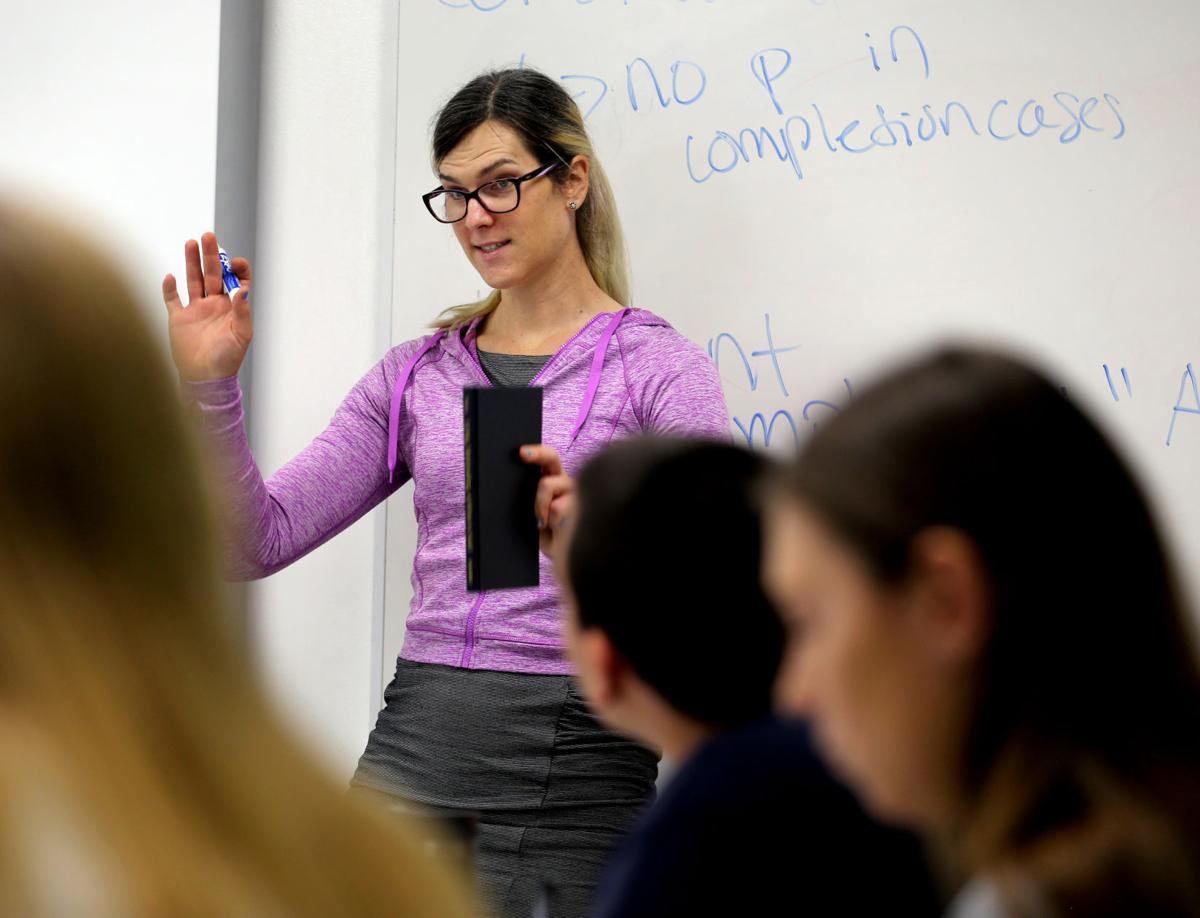 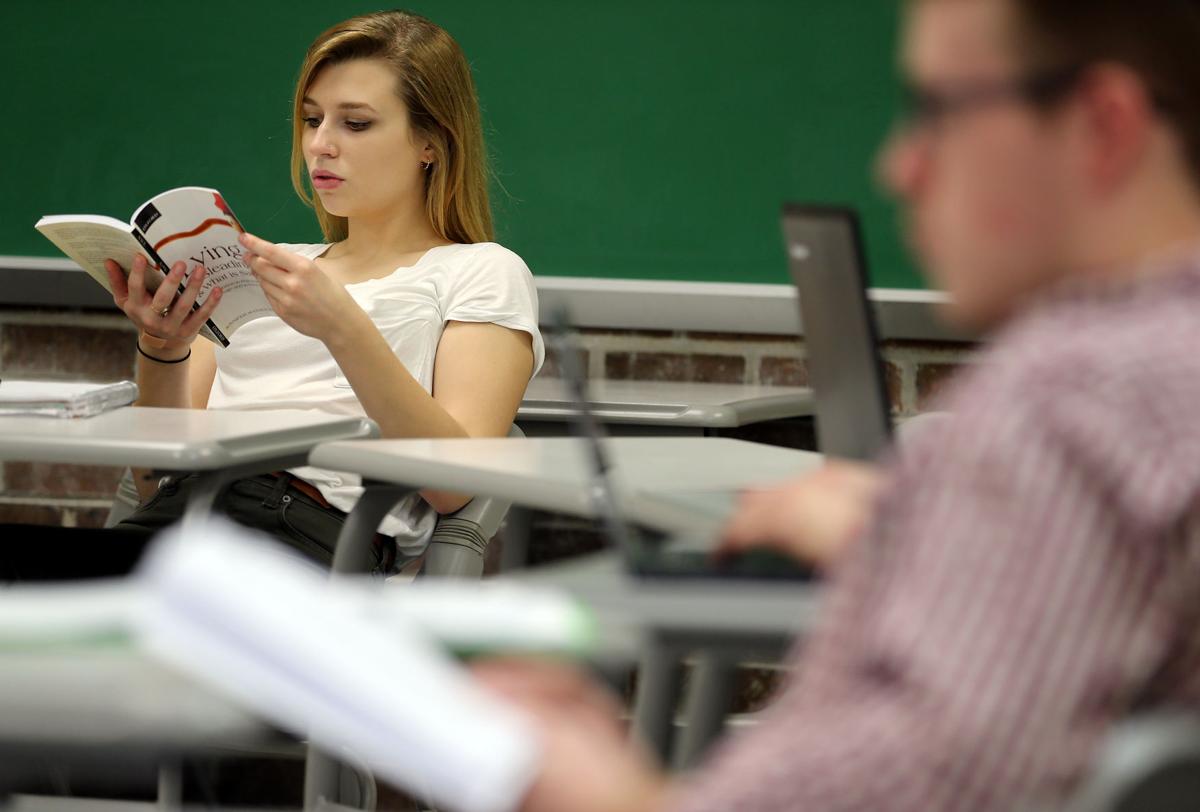 Meredith Jackson studies her book on lying during Rachel McKinnon's philosophy class at the College of Charleston. Grace Beahm/Staff 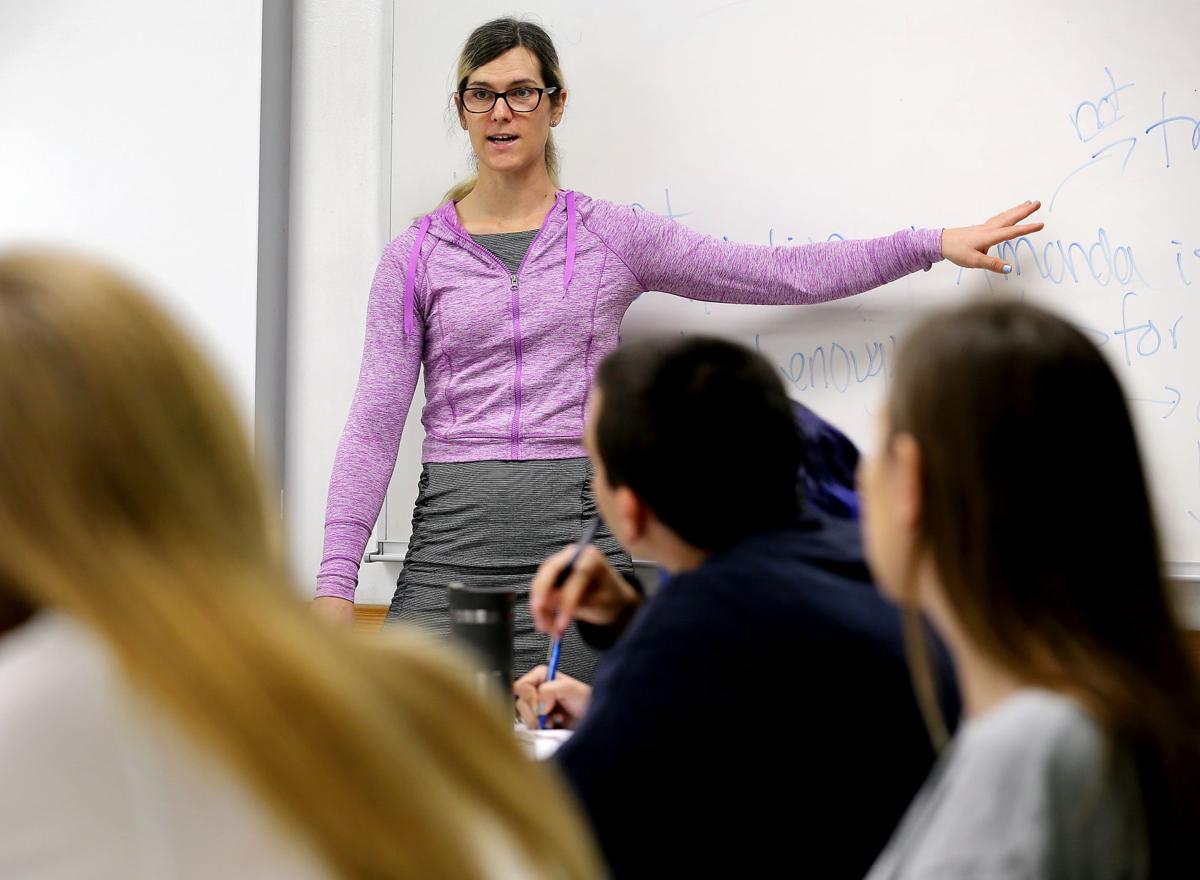 Meredith Jackson studies her book on lying during Rachel McKinnon's philosophy class at the College of Charleston. Grace Beahm/Staff

Emotions were running high on the College of Charleston campus after Donald Trump won the presidency. Some of her students were on the verge of tears. And McKinnon, an assistant professor of philosophy, was also shaken.

So in the first of half of her Introduction to Philosophy class, McKinnon allowed her students to vent over candy about their fears of a Trump presidency. At one point, McKinnon said, she slammed her hand against the lectern after a student suggested South Carolina's deeply conservative Legislature would protect gay, lesbian and transgender rights if the new administration attempted to yank them away.

"Where do you think we are?" she snapped.

About 20 minutes after class ended, the philosophy department chair approached McKinnon. A mother of one of McKinnon's students had apparently called President Glenn McConnell’s office, accusing McKinnon of having a mental breakdown and silencing conservative students in class.

McKinnon, a self-identified queer woman and an expert in the philosophy of language, is used to student criticism. Her politics swing firmly to the left and her courses are unapologetically controversial.  Inevitably, her classes make some students uncomfortable, even angry. She’s writing a book about lying and misleading, and teaching a senior seminar based on her work. By sheer coincidence, her research has converged with one of the most tempestuous political climates in recent memory, where even the notion of truth is up for debate.

But since the election, she's noticed a measurable increase in student complaints. In their class evaluations, students have impugned McKinnon for political bias, for being unfair to Trump in discussions about lies and propaganda, for being racist against white people. McKinnon, by the way, is white.

A nontenured professor, McKinnon fears repercussions for her job and her residency as a Canadian immigrant if she continues to, as she puts it, "speak the truth" as she sees it. She's not the only one.

The fractious national debate, pitting liberals and conservatives against one another in the wake of Trump's ascension, has spilled over into colleges and universities across the country, including the College of Charleston, where progressive professors feel stifled and conservative students, silenced.

The website Professor Watchlist, founded by conservative nonprofit Turning Point USA, catalogs more than 150 U.S. college and university professors who supposedly “discriminate against conservative students and advance leftist propaganda in the classroom.” Its directory includes three professors from South Carolina — two from Clemson University and one from Coker College in Hartsville. On the website, their "radical agenda(s)" are described as lecturing on white supremacy, supporting the construction of a new campus multicultural center and travelling to Ferguson, Missouri.

College of Charleston professors could be next.

"There was palpable emotion on campus right before and after the election on all sides," said Jon Hale, a history professor at the college. "Some people are nervous to speak out on particular issues, some feel motivated to speak strongly on certain issues and some feel strongly to call those out who are using the classroom to discuss issues they feel should not be in a classroom."

At a forum Monday night, organized by Hale and other faculty members, multiple professors challenged Provost Brian McGee about the administration's position on academic freedom. Their fears were compounded, they said, by a series of emails sent by the administration soon after the election. In one email to department deans and chairs, McGee warned of reports of students' complaints regarding “inappropriately one-sided” and “crudely partisan” class discussions. In another, President McConnell reminded the campus community, "no matter the political divide, we must always be tolerant of each other's views."

Then in December, McConnell announced the creation of an online complaint system for students to express their concerns. At the forum, McGee assured faculty that the administration would protect them from potential interference from the Legislature, such as the 2014 incident in which lawmakers threatened to pull the college's funding for assigning "Fun Home," a gay-themed graphic novel in its “College Reads!” program.

The forum didn't assuage McKinnon's fears. As a professor, she said her duty is not to indoctrinate students, but to challenge power structures. She also wants her students to feel free to openly express their views, so she uses an anonymous grading policy, in which each student is assigned a number, to ward off any unintentional biases on her part. "It's deeply frustrating," she said, that some students in her classes still feel unsafe.

'We all have to respect each other'

But some students say campus has become hostile to those with conservative politics. On Facebook, C of C's College Republicans urged members to use the new student complaint tool "to report any misconduct or violations from professors."

"As we become more diverse, a lot of people don't agree with each other and instead of having universities where people meet other people and hear diverse opinions, it’s like opinions that differ from theirs are not even allowed to be heard. They're silenced," said Charleston County Republican Party Chairman Larry Kobrovsky, who's heard from right-leaning C of C students complaining about bias against Republicans on campus.

"I believe college campuses are probably the least diverse places in terms of thought," he said.

Zalirah Robinson, a 20-year-old junior, believes most students and professors aren't even willing to engage with conservative opinions. One of her history professors last semester, she said, spoke openly about voting for Hillary Clinton, called Trump a rapist and encouraged students to go to Planned Parenthood for birth control. Robinson didn't feel comfortable. But speaking out, she feared, would lead to "complete isolation."

She dropped an African-American literature class this semester after a professor laughed at a student who tried to argue the federal government's slow response to Hurricane Katrina wasn't about racism.

"I feel like if the class has anything to do with (politics), then we should be allowed to openly discuss politics, but in a safe environment where everyone can freely express their opinions without someone hurling insults at them," Robinson said. "We all have to respect each other."

Justin Yarbro, a 22-year-old senior, takes McKinnon's senior seminar on "Lies" on Tuesday and Thursday afternoons. Before the start of class Thursday, inside a stark white classroom on the second floor of Maybank Hall, Yarbro chatted with another student about Kellyanne Conway, a top Trump adviser.

How does a journalist interview a person, like Conway, he wondered aloud, who doesn't acknowledge the questions asked?

"Someone could write a paper on that," McKinnon remarked. "Wouldn't that be cool?"

This is Yarbro's second class with McKinnon. Although he cast his ballot for Trump in November, he doesn't count himself among the new president's supporters. His vote, he said, was a vote against Hillary Clinton. Still, it's not easy for reluctant Trump voters to admit their political preferences on campus.

"Everyone hates him," Yarbro said. "It seems to me to be the typical and usual opinion...that if you voted for Donald Trump, if you support any of his policies, then you support all of them. And that you're racist."

But in McKinnon's class, Yarbro said he's never felt singled out or belittled by his professor even though his views likely diverge from hers. On the Tuesday after Conway's now-infamous interview with NBC's Chuck Todd, their class discussed "alternative facts" — the phrase coined by Conway — and White House Press Secretary Sean Spicer's spurious claim that Trump's inauguration had "the largest audience ... period" despite evidence to the contrary.

An enthusiastic Trump supporter might have felt angry in McKinnon's Tuesday's class, Yarbo said, but not uncomfortable.