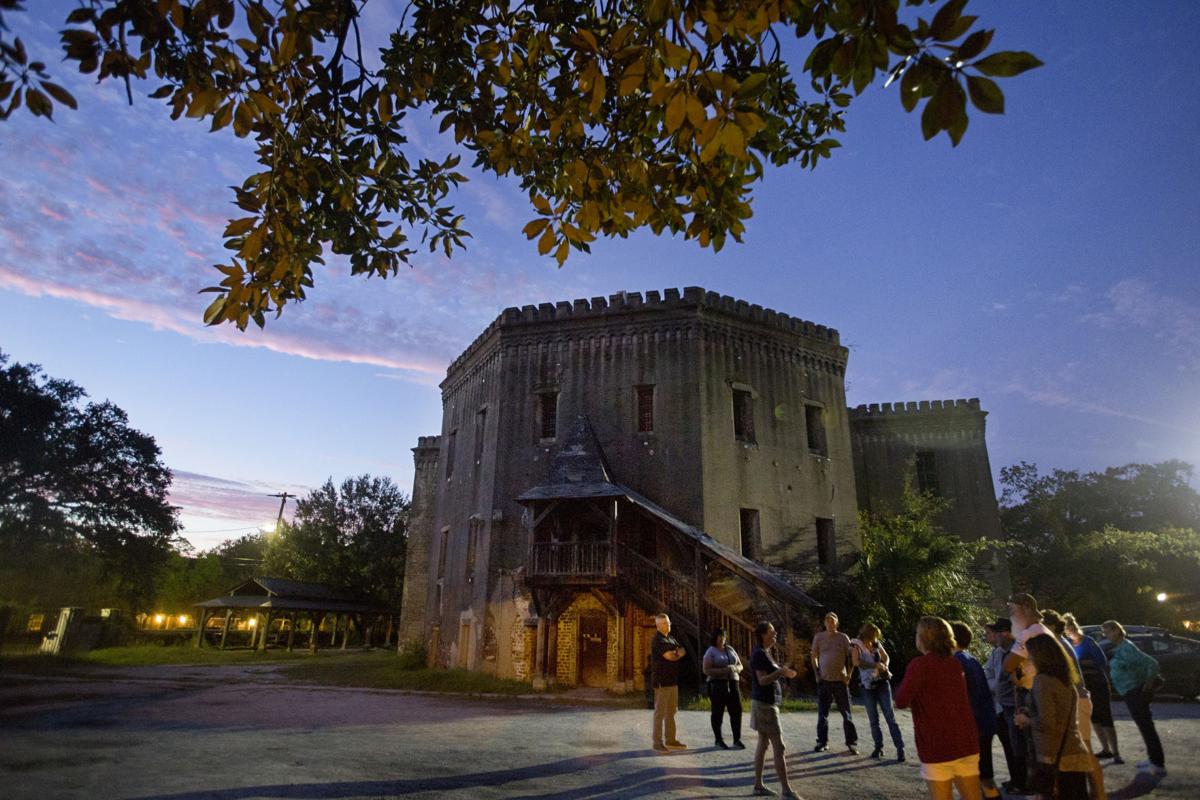 A group of visitors listen to Joy Watson of Bulldog Tours before a Haunted Jail Tour of the old City Jail in Charleston. Alleged serial killers John and Lavinia Fisher were housed there before they were hanged for highway robbery. Grace Beahm Alford/Staff 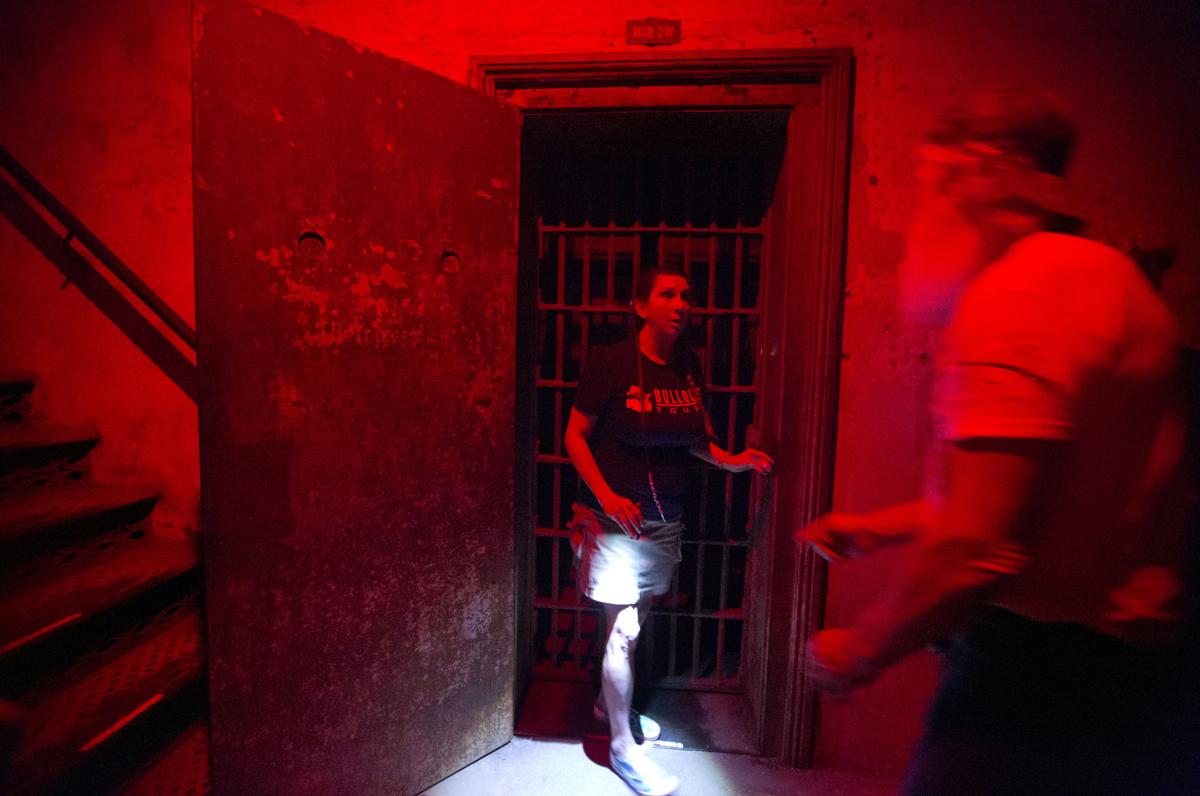 Joy Watson of Bulldog Tours leads a group of visitors on a Haunted Jail Tour during October in Charleston. Alleged serial killers John and Lavinia Fisher were housed in the old City Jail before they were hanged for highway robbery in 1820. Grace Beahm Alford/Staff 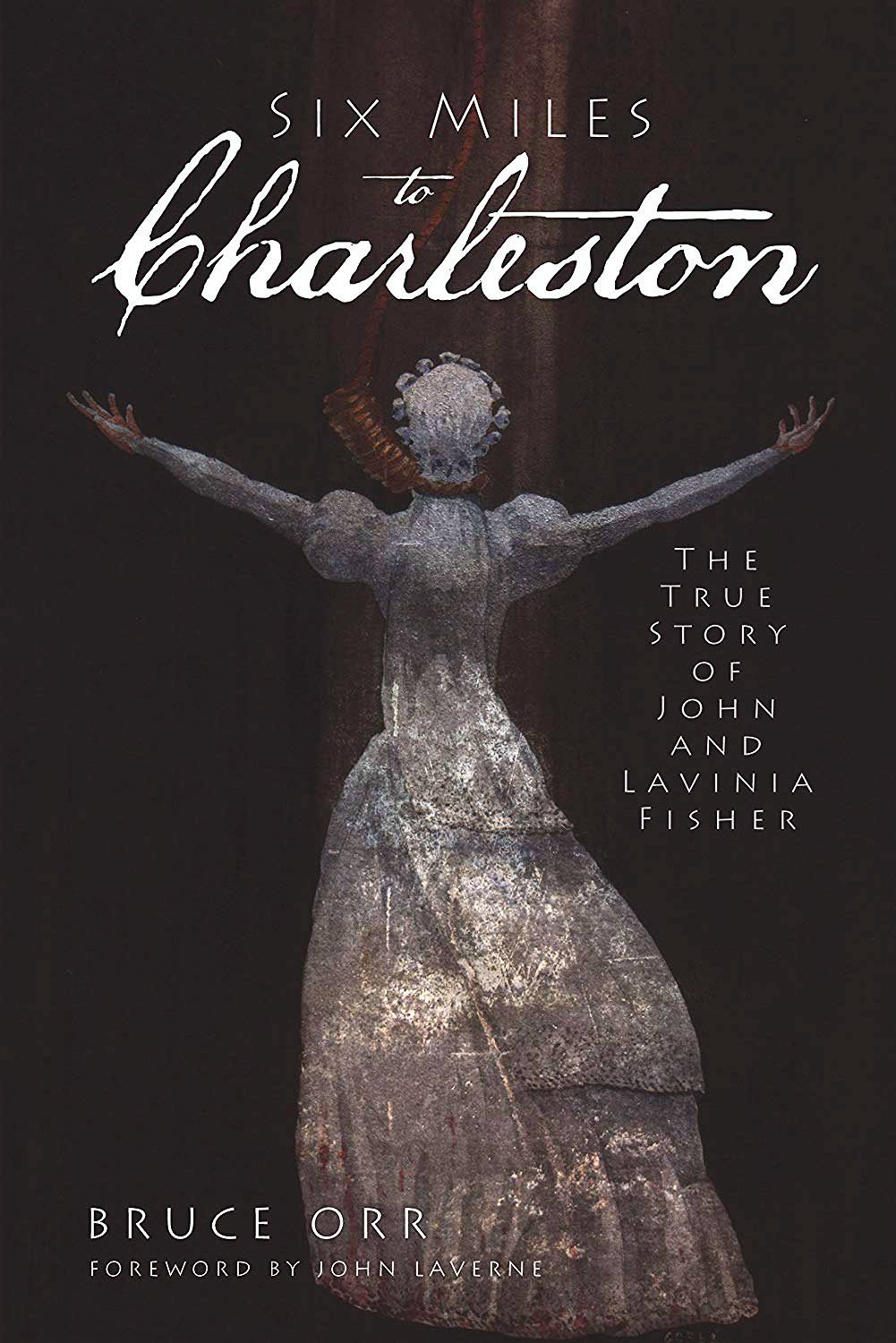 "Six Miles to Charleston: The True Story of John and Lavinia Fisher," was written by former police officer Bruce Orr and published in 2010. It dispels many of the myths about the alleged serial killers who were hanged for highway robbery, not murder, in February 1820. 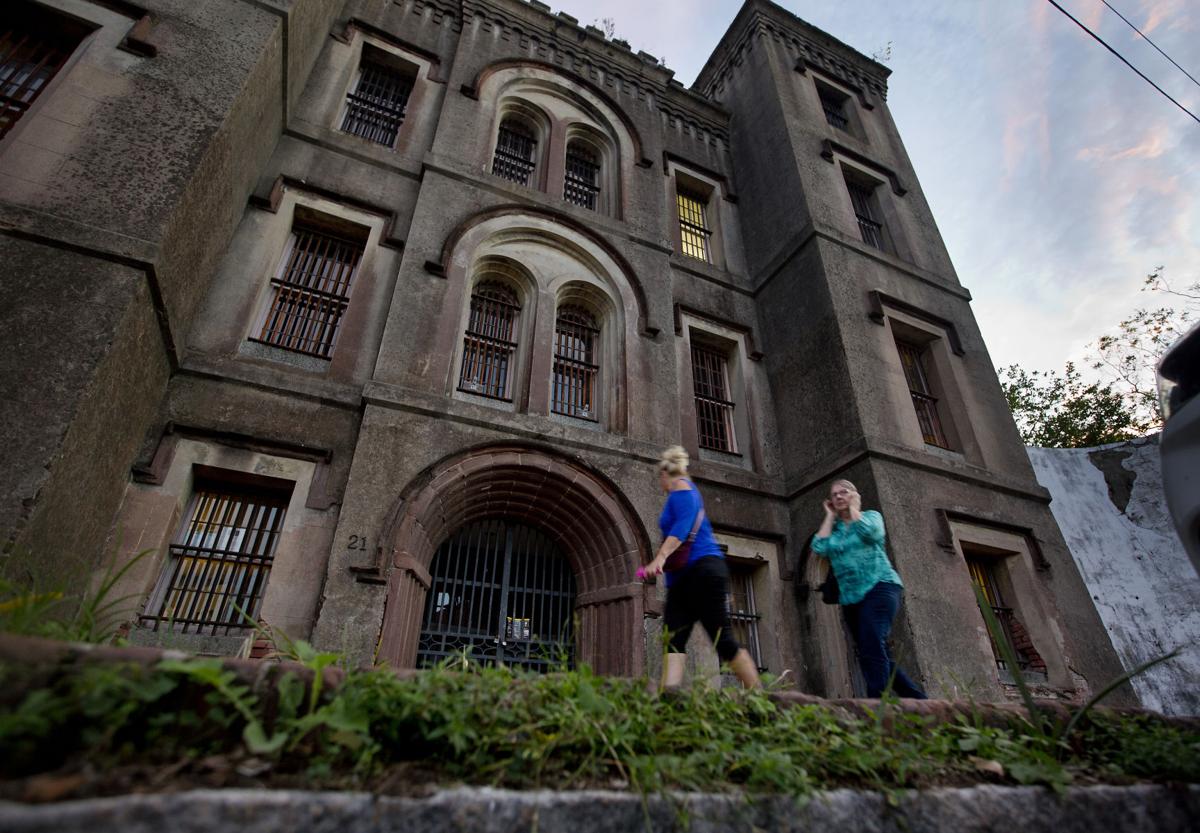 Visitors arrive for a Haunted Jail Tour at the old City Jail in Charleston. Alleged serial killers John and Lavinia Fisher were housed there before they were hanged for highway robbery, not murder. There is no evidence they ever killed anyone, though the legend has grown that they poisoned and butchered their victims. Grace Beahm Alford/Staff 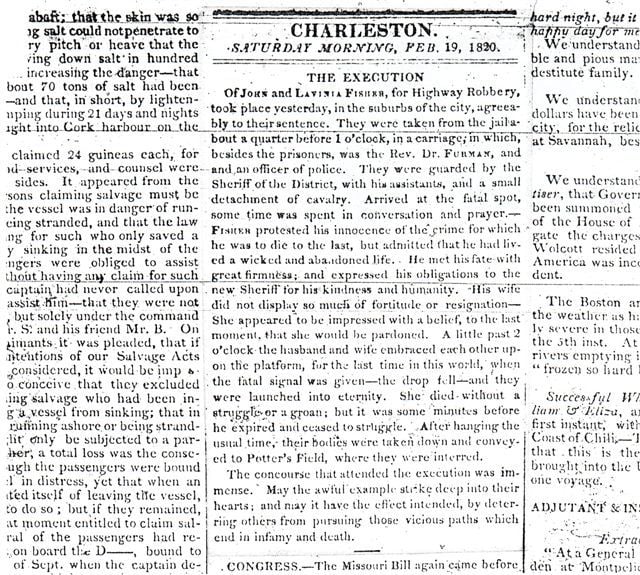 The notice of the execution of Lavinia and John Fisher appeared in a Charleston newspaper in 1820 after they were hanged for highway robbery. File

"If you have a message you want to send to hell, give it to me; I'll carry it."

Those are the now infamous last words of the first alleged female serial killer in the U.S. just before a ranting and unrepentant Lavinia Fisher was hanged in Charleston along with her husband, John, in February 1820, nearly 200 years ago.

But the criminal duo weren't strung up for murder. The charge against them was highway robbery, a capital offense at the time.

The story goes that backcountry travelers bound for Charleston to sell hides, cotton, tobacco and other produce could stop at any of a series of boarding houses set up at different mile-named intervals up the peninsula along what is known as Meeting Street Road. Flush with cash, traders leaving the city would take the same route.

At Six Mile House, located where the old Navy hospital now stands in North Charleston, Lavinia lured in guests with her seductive wiles, fed them a home-cooked meal and sedated her victims with a warm tea, poisoned with oleander. Her husband then robbed them while they slept, murdered them, butchered them and disposed of their bodies in the cellar.

There are even stories that a trap door would open and the victims would fall through the floor.

Over time the story of the Fishers' purportedly garish undertakings has become legend, growing more colorful as storytellers multiplied their misdeeds.

One account, published 10 years after the hanging, says "a great number of skeletons were found." At one point, it had grown to between 20 and 30 victims found in different states of decomposition.

Actually, only two bodies were unearthed at Six Mile House a few days after the Fishers and others had been arrested Feb. 18, 1819, according to author and former Charleston-area homicide detective Bruce Orr in his book "Six Miles to Charleston: The True Story of John and Lavinia Fisher." It was published in 2010 and dispels much of the myth about the tempting Lavinia and her "butchering" husband.

Haunted Holy City: Some of Charleston's famous ghosts and their stories

One body of a white male was found in a freshly dug grave in the woods near the Six Mile House. The victim had been shot around the time the sheriff and a lynch mob raided the Six Mile House. He was buried next to the remains of a young African American woman, whose body was placed in an unmarked grave there two years earlier.

Hers is the only skeleton ever found near the house. It is not known if the man buried there was a gang member shot during the raid or a victim of robbery.

"There are no accounts of trap doors, poisoned tea or a cellar full of skeletons," Orr said.

If all those bodies were there, the media would have reported it or someone would have smelled the decaying flesh, he maintained.

"That never happened, and the reason it never happened is because the story of a cellar full of corpses, just like the oleander poisoned tea, is fabrication and fiction," Orr wrote.

No murders were ever attributed to the Fishers, and the two bodies that were found — and never tied to the Fishers — are not enough to fit the FBI's serial killer definition of three or more people murdered over a period of more than 30 days, according to Orr's book.

Some accounts say Fisher was wearing her wedding dress when she met the hangman, but Charleston historian Nic Butler says it most likely was a white shift or smock-type garment that prisoners wore at the old City Jail where the pair were housed for nearly a year.

Butler said he had not delved into the Fisher story because so much of the tale has been distorted over time.

Orr maintains the likelihood of Lavinia wearing nuptial attire can be cast aside since the local citizenry, fed up with what they had heard about people being roughed up and robbed or even worse by backwoods ruffians at the boarding houses, formed a mob and burned the Six Mile House to the ground, along with all of the Fishers' possessions, after they were arrested.

The Five Mile House also was burned, but the Four Mile House, often confused with the Six Mile House, remained standing until 1969 when the abandoned and rundown building was demolished near where Charleston meets North Charleston close to the Neck Area. A gas station sits on the property south of Pittsburg Avenue.

Other accounts say Lavinia Fisher, who proclaimed her innocence to the end, eschewed repentance and blurted out profanities on the gallows, haunts the old jail but didn't die there and she was buried in a potter's field with her husband, where the Medical University of South Carolina now cares for the living.

Her ghost, if there is one, could be at the old jail because the Fishers, him 29 and her 28, endured a harsh last full year of their lives in what was most likely unbearable conditions by today's prison standards.

The jail, built in 1802 over a potter's field of slaves, vagrants and derelicts to hold 130 people, often housed 300 or more. The barred windows did not keep out the cold, heat, insects and rodents. Whippings, beatings and physical and sexual assaults were common. A debtors' section often built coffins, since so many people reportedly died there.

It had no running water, and wood chips on the floor often served as bedding and the toilet. Filth was common.

The Fishers were indicted for assault with intent to murder and common assault for the attacks on two men at Six Mile House on the same day. The charge was later changed to highway robbery. Others were involved and arrested, but the Fishers paid the ultimate price for the attacks along with William Heyward, who was tried separately and hanged later.

The couple was convicted of the charges in May 1819, when their attorney motioned for a rehearing. That didn't happen until January 1820, so the Fishers went back to jail to endure the long, hot summer in a single isolation cell on the lower level, separate from the general population.

On Lavinia's pleadings, they were later moved to a less secure section on an upper level.

It was here that John Fisher and another prisoner created a hole under a window on Sept. 13, 1819, and began lowering themselves down the prison wall with knotted-together blankets.

The first man made it out, but as Fisher, who went second, made his way down the wall, the makeshift rope slipped loose and Fisher fell to the ground. Lavinia could not escape, and the two men fled into the darkness.

Devoted to his wife, John Fisher didn't want to leave her behind, so the two escapees stayed around trying to devise a plan to free her. They were found hiding under an overturned boat on the wharf the day after their escape and rejoined Lavinia behind bars.

In January 1820, a new trial was denied, and the Fishers were convicted of highway robbery and condemned to hang the next month. The charges were inexplicably changed from the attack on one man to the circumstances surrounding the attack on a trader who had stopped at Six Mile House to water his horse. The outcome was no less the same.

The original date for the sentence to be carried out was Feb. 4, but it was pushed back to Feb. 18 by the governor over the insistence of some of the townspeople that the couple be given time to make peace with God.

Nearly one year to the day after their arrest, Lavinia and John Fisher were transported from the jail in a carriage to the gallows on the city's edge near where Line and Meeting streets are today.

Reconciling himself to his fate, John climbed the scaffold, but Lavinia, believing she would not be hanged because she was a woman and a governor's pardon would be delivered at the last minute, resisted.

Constables dragged her to the stand, where she professed her innocence, begged pity from the crowd, cursed repeatedly, stomped her feet and damned the governor.

Her husband pleaded with her to make peace with her maker, but she remained defiant.

Some accounts say Lavinia cheated the hangman by jumping off the platform before the floor fell beneath her, but that didn't happen, based on eyewitness accounts.

The "jumping off the platform" story is probably related to the fact that Lavinia noticed the sheriff examine a written document and she believed it was the pardon she was going to receive. In her excitement, she was about to leap from the platform for her expected freedom, but the sheriff quickly assured Lavinia no pardon would be coming and she would be put to death.

In her final moments, Lavinia calmed down and made her peace.

The caps were placed over the couple's faces. The sheriff gave a private signal to the hangman, and the platform gave way.

Lavinia died without a groan, but it took her husband a bit longer as he struggled on the noose, according to a newspaper account the next day.

Orr goes on to say their deaths may have been part of a government conspiracy to seize the lands for a naval base then-Gov. John Geddes wanted in Charleston at a time when President James Monroe visited the city while on a Southern tour of port cities. The president was looking for a site for a new Navy base.

An unimpressed Monroe left the city, and the Navy base didn't materialize for another 80 years.