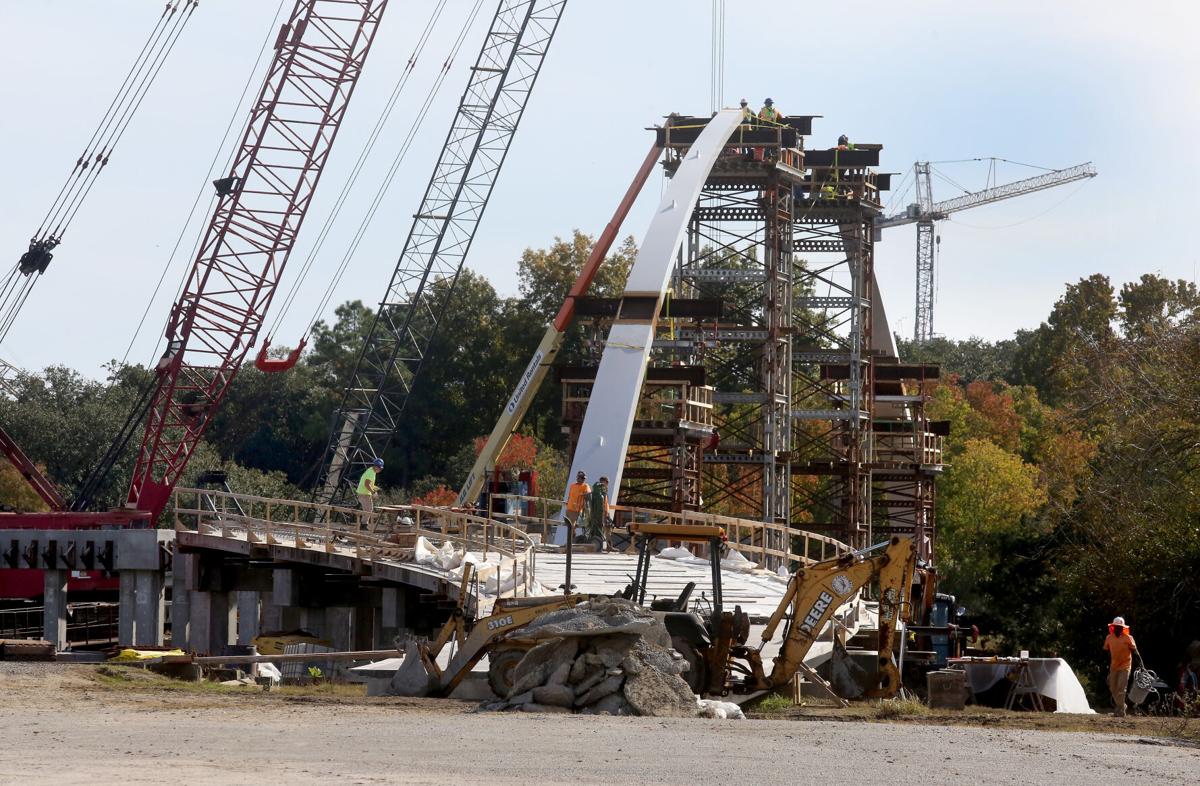 Construction crews continue to work on the new pedestrian bridge that will double the size of North Charleston’s Riverfront Park November 12, 2021. Brad Nettles/Staff 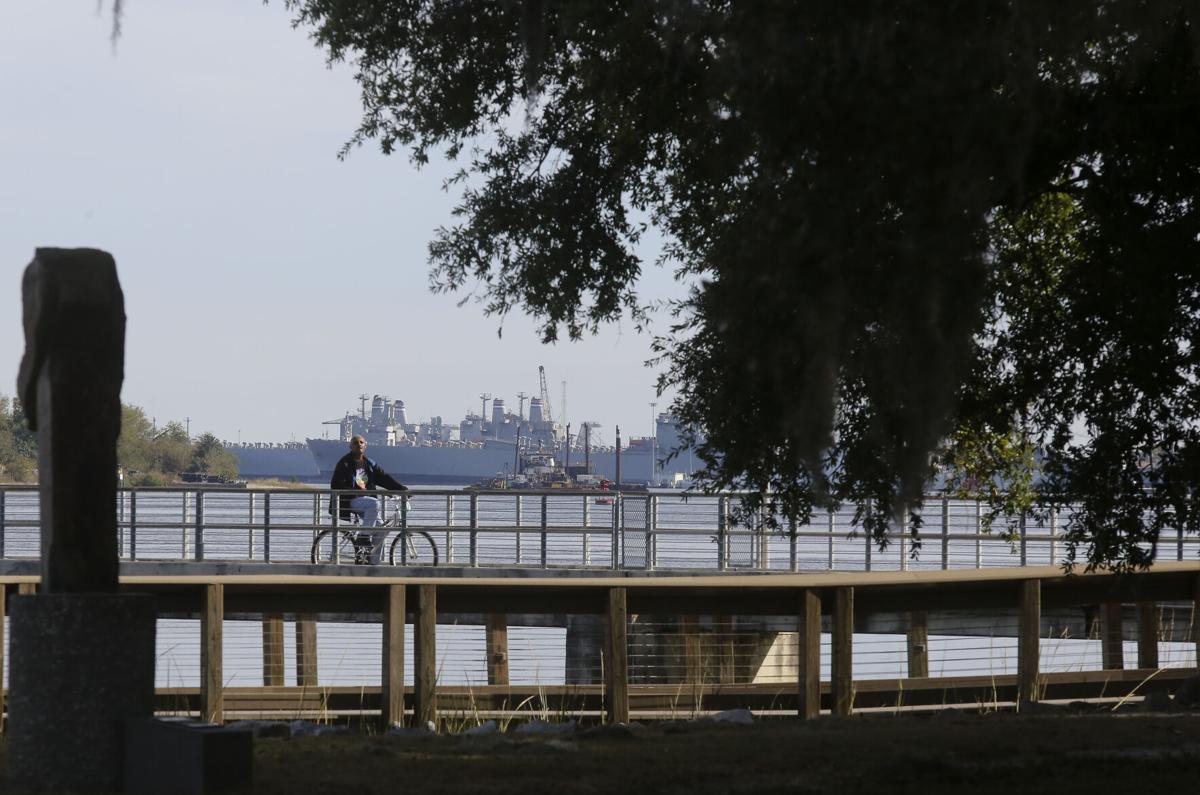 A guest at North Charleston’s Riverfront Park rides his bike on a dock with the old naval shipyard in the background Nov. 12, 2021. Brad Nettles/Staff 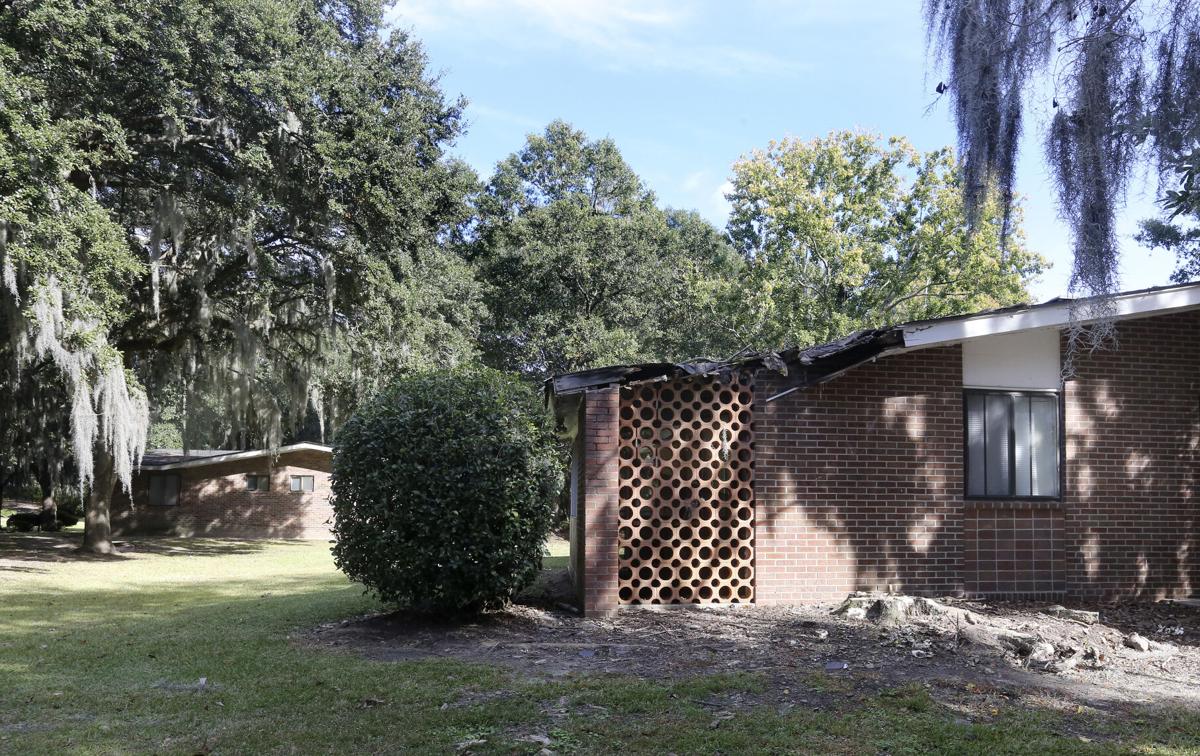 North Charleston plans to tear down single-story base housing and build new homes at the old Charleston Naval Base Nov. 12, 2021. Brad Nettles/Staff 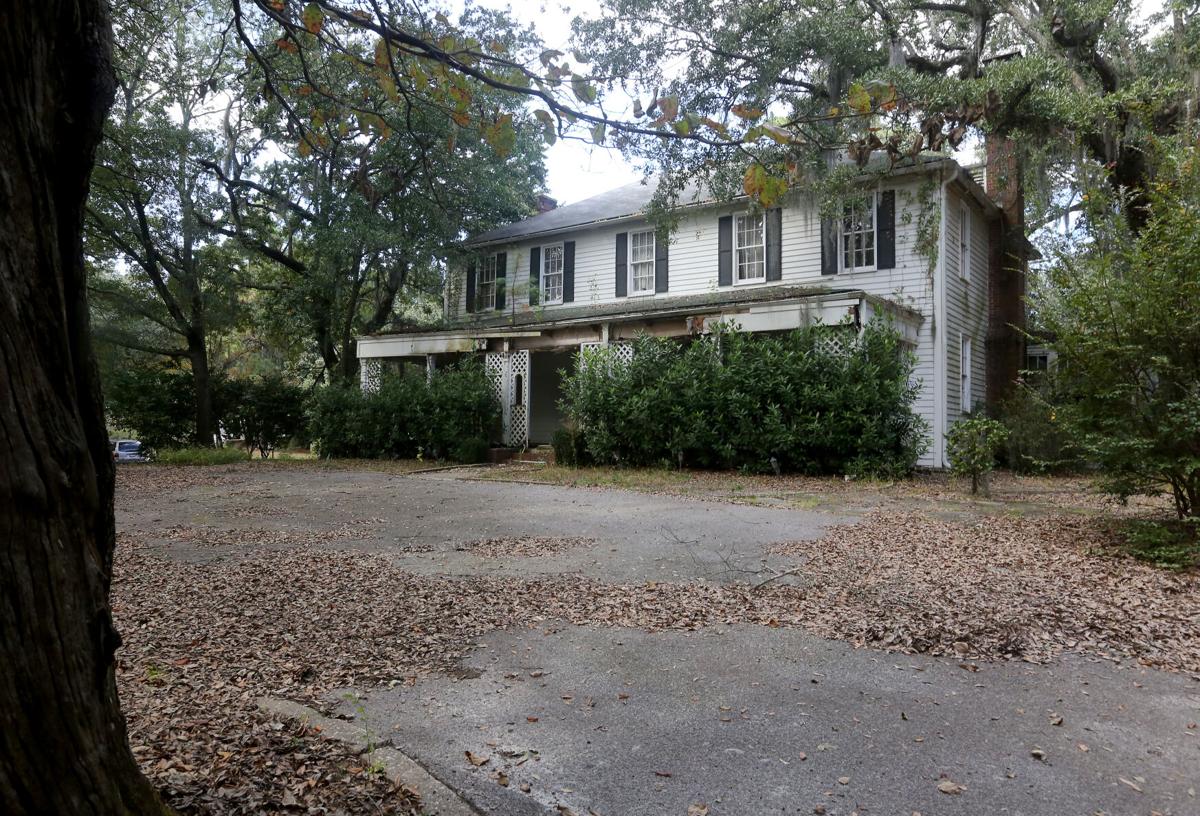 North Charleston plans to remodel and fix up the older wooden officer homes at the old Charleston Naval Base. Brad Nettles/Staff 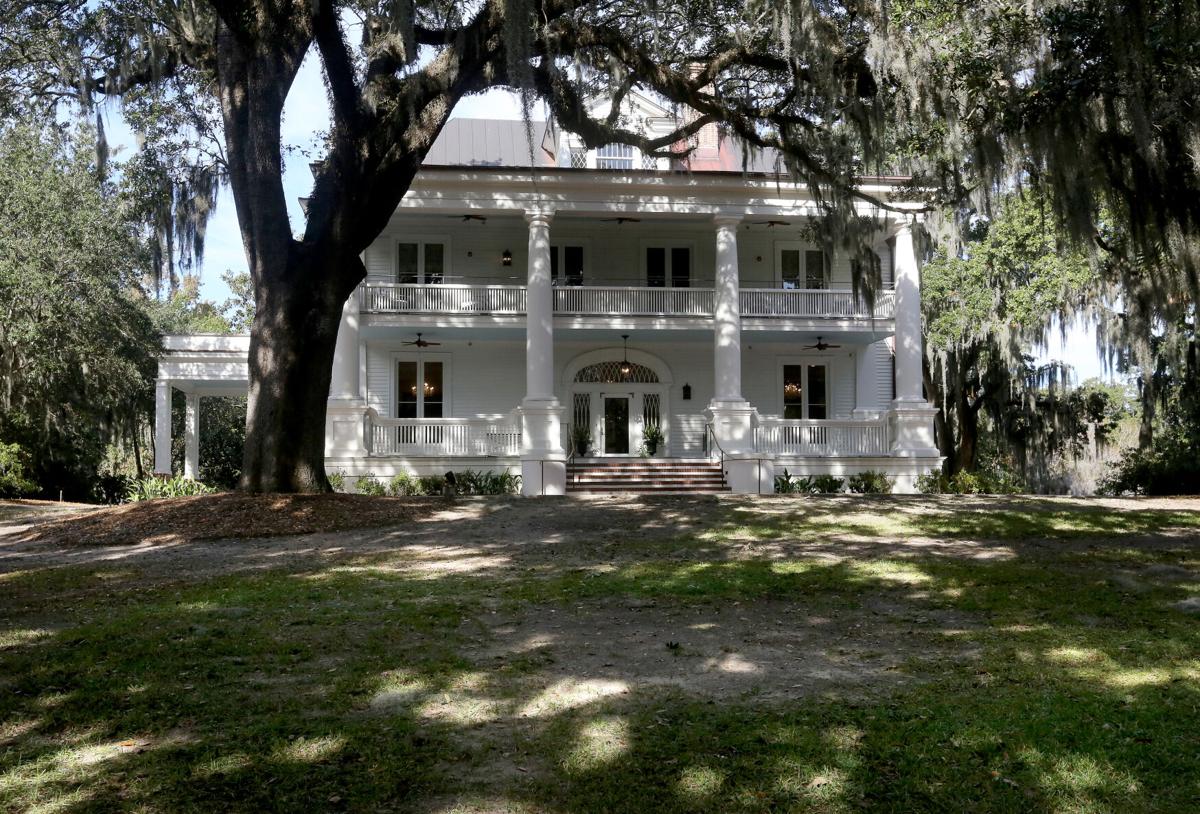 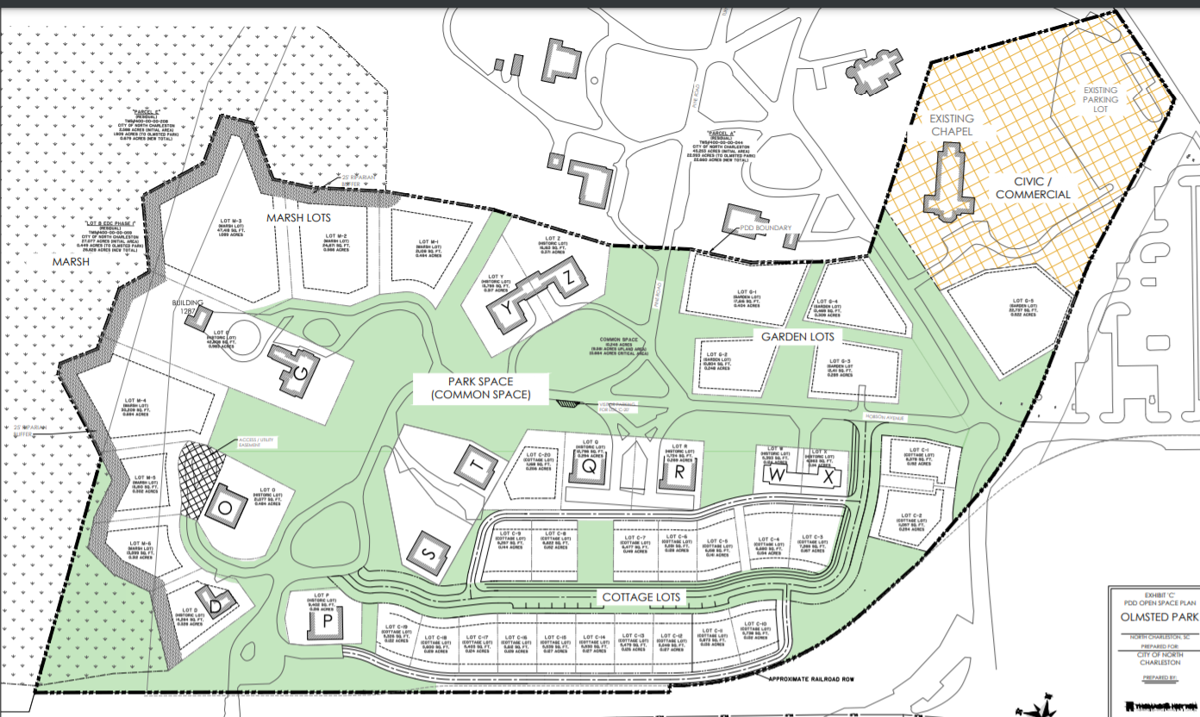 The Olmsted Park plan calls for up to 84 single family and multi-family residential units on property surrounded by Noisette Creek and the Cooper River. There's also 10 acres set aside for trails and open space, and three acres for commercial use. Provided. 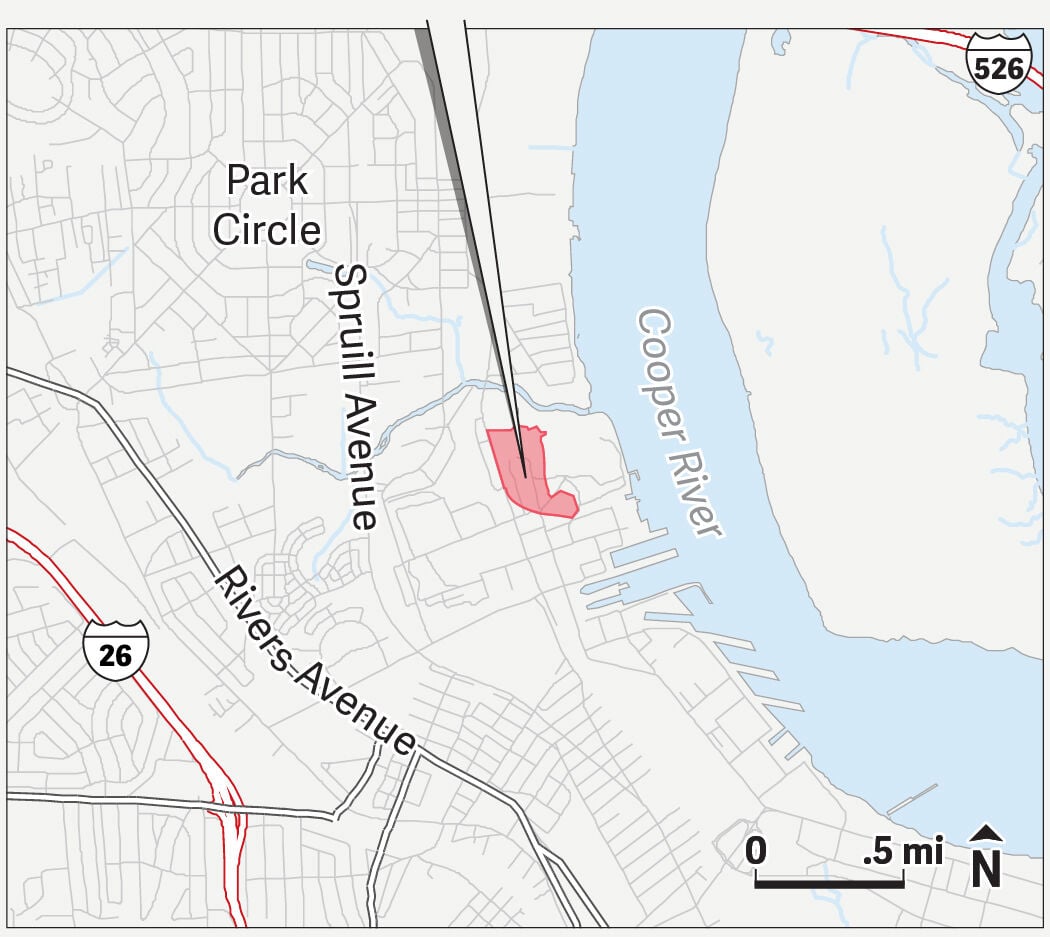 PROPOSED PARK: North Charleston plans to use about 28 acres of the naval base to build its proposed Olmsted Park. SOURCE: ESRI

Construction crews continue to work on the new pedestrian bridge that will double the size of North Charleston’s Riverfront Park November 12, 2021. Brad Nettles/Staff

North Charleston plans to remodel and fix up the older wooden officer homes at the old Charleston Naval Base. Brad Nettles/Staff

NORTH CHARLESTON — Though the full vision won't be realized for many years, the city is making noticeable progress in its attempt to transform 70 acres at the northern end of the old Charleston Naval Base into a waterfront community with single-family homes, condos, parks and businesses.

At Noisette Creek, construction crews are installing an 800-foot-long pedestrian bridge, a project that will double the size of Riverfront Park, which sits just off the Cooper River.

At the foot of the bridge, the city intends to put a central business district near the creek.

Farther north, where massive oak trees shade historic buildings that once housed military personnel, North Charleston City Council is expected to soon rezone 25 acres to pave way for a neighborhood that blends in with the area's setting and scenic landscape.

There's a long way to go. Challenges on the horizon include working with the federal government to have some of its activities relocated, as the uses don't fit within the city's overall vision for the space. North Charleston is also trying to strike a balance between development and preserving the area's historic feel.

City officials are optimistic about the work being done.

“Our desire up on the north end is to create an urban environment that can handle anything from commercial to office to residential," said Ray Anderson, special assistant to Mayor Keith Summey. "We see the light at the end of the tunnel."

A neighborhood in the park

In 2001, Summey and developer John Knott unveiled the Noisette project, a plan to revitalize thousands of acres, while the company would play a more hands-on role in redeveloping the 350 acres at the former base’s northern tip.

That project was expected to take at least 15 years and $1 billion or more of public and private money.

While much of the city’s Park Circle area has been revitalized with new homes, new schools and new businesses, the Noisette Co. lost most of its holdings on the northern end of the base to foreclosure several years ago.

Still, city officials continued to believe in the ideas behind the plan.

Olmsted Park is North Charleston's latest plan that details the city's vision for the area.

The city has been working with engineering and design firm Thomas and Hutton on the project, which draws its name from the Olmsted Brothers, a famous architectural firm established in 1898.

That year, two plantations were purchased by the city of Charleston to create Chicora Park, designed by the Olmsted Brothers.

The vision was to create a destination for Charlestonians seeking respite from everyday life in the city. The original Olmsted plan included a series of ponds, trails, two great lawns, a railway station, a boathouse, a bamboo garden, and a collection of exotic trees and shrubs.

Little of the original Olmsted plan was realized because, in 1900, Chicora Park was purchased by the Navy, and the Charleston Naval Base was established in 1901.

The base closed in 1996. The city intends to re-envision the original Olmsted plan with a neighborhood where houses are spaced out in a park setting. The plan calls for up to 84 single-family and multi-family residential units on the property. There's also 10 acres set aside for trails and open space, and three acres for commercial use.

The plan involves demolishing brick duplexes built after World War II as part of the Capehart Housing Act of 1955. The structures, owned by the city, are dilapidated and of no historical significance.

After demolition, the city would sell the lots to individuals who'd then develop houses that mirror the southern, historic architecture of the nearby officers' buildings.

"We'll ask them for timeframes for when they'll have to either renovate the homes or resell them back to the city so we can find somebody to do it," Anderson said.

The city anticipates these new houses will be begin construction mid-2023.

The city has already been getting some interest from potential buyers. Anderson has been receiving inquiries from interested parties for the past 10 years, he said.

He anticipates there will be more interested people than available lots.

"Our next goal is to figure out what is the mechanism to sell," he said. "We may have to do some sort of lottery."

The Olmsted Plan seeks to maintain the historic and scenic character of the area. Olmsted is within the Charleston Navy Yard Officers’ Quarters Historic District, and 12 of the 28 historic quarters will be included within the Olmsted plan.

Approval from the Olmsted Park Design Review Board will be required prior to any permits being issued for exterior alterations, additions and signage. Additionally, consideration from the the state's Historic Preservation Office and Ocean and Coastal Resource Management is required for exterior modifications of historic structures. Paved streets and sidewalks will not be required in the neighborhood so as to minimize impact to the existing nature of the community.

One challenge will be to keep the properties affordable. It's important for the plan to keep in mind the region's workforce and help to keep people close to where they work as opposed to commuting from the fringes of the tri-county region, Anderson said.

"I feel comfortable that we'll be sympathetic in working with master developers on affordability," Anderson said. "There are hundreds of wonderful examples out in the country where there has been some mixed income housing that has worked very well."

Other work shaping up

Similar work has been shaping up around the base.

Several of the homes adjacent to the proposed Olmsted Park area have been rehabilitated into private businesses along the waterfront. Also, the Eternal Father of the Sea Chapel was moved to its current site to avoid demolition by Palmetto Railways, and it now serves as a wedding venue.

A couple of the historic homes are used as bed and breakfast inns. The Charleston Naval Complex Redevelopment Authority has also renovated several of the homes and is using Quarters H and I, formerly the Commandant’s Headquarters, for its offices.

While the city is prepared to provide the necessary zoning for the Olmsted plan, its ideas for city-owned property farther south are largely conceptual, save for the pedestrian bridge that is expected to be completed in June.

The bridge will be 800 feet long and 20 feet wide, featuring two steel arches. It's main goal is to expand Riverfront Park, which has grown increasingly popular for large events. Charleston Wine + Food Festival recently announced the park will serve as the event's 2022 location.

The structure will also provide additional transportation options to the park, earning it a nod from the Coastal Conservation League.

The bridge will be a great asset for the community, which currently doesn’t have a particularly safe way to walk or bike to Riverfront Park, said Jason Crowley, senior program director.

At the foot of the bridge, the city owns several acres that it wants to eventually transform into a park and central business district similar to those in Vancouver, Canada, and Washington, D.C, said Steve Dudash with Thomas and Hutton. That would be accompanied by the 30-acre Battery Park near the creek.

"There's nothing like this in South Carolina," Dudash said.

Councilman Bob King said limited parking is a main concern. He said that the city is looking into possibly using some city-owned property to address the problem.

"They see the wisdom of moving those facilities behind a more secure station," he said.

To read more stories in the series about growth and development, go to postandcourier.com/boomandbalance/.