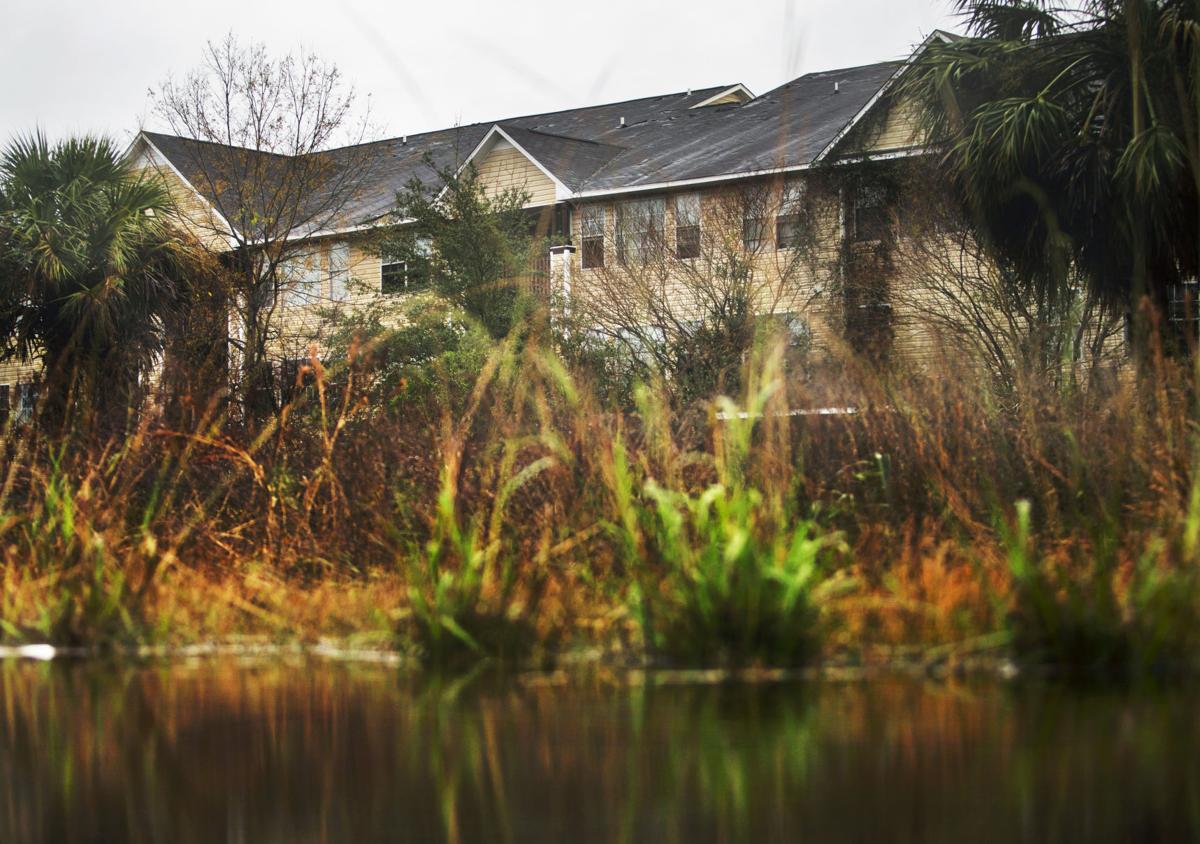 Osprey Pointe, a 72-unit apartment building for seniors, was left vacant after being found unfit to live in a decade ago in North Charleston. Gavin McIntyre/ Staff 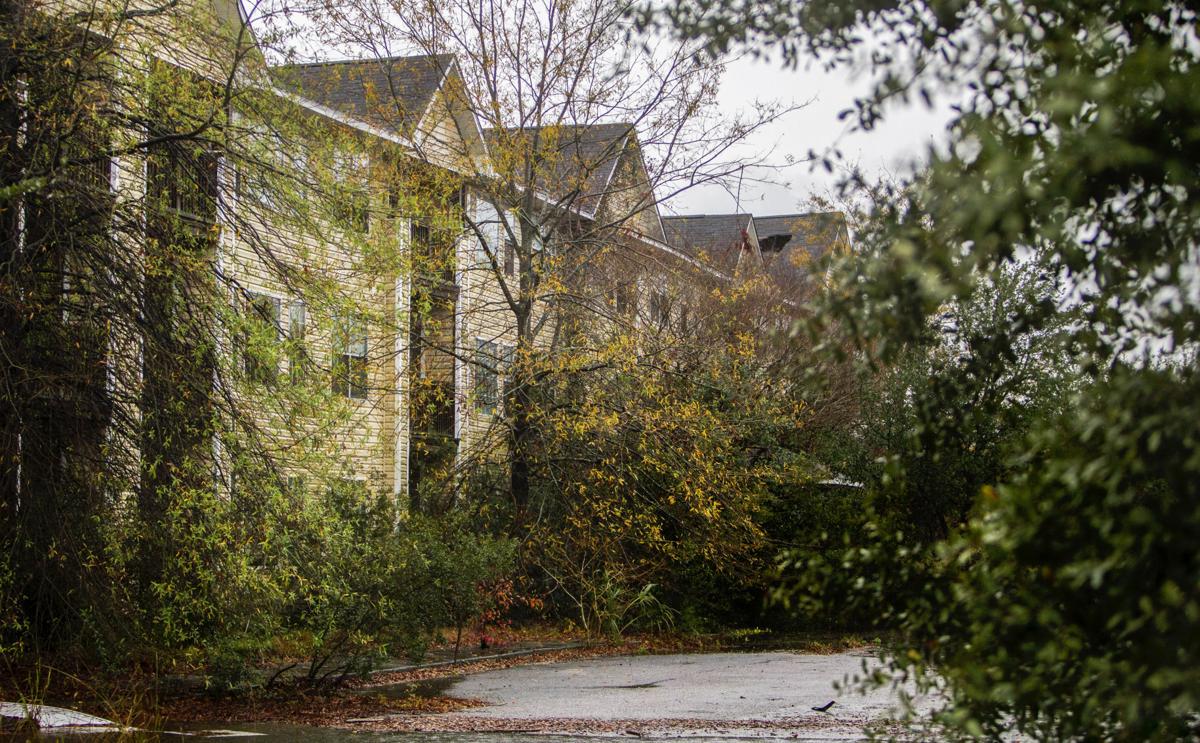 Overgrown trees surround Osprey Pointe, a 72-unit apartment building for seniors, after it was left vacant a decade ago in North Charleston. Gavin McIntyre/ Staff

The Charleston region continues to face an affordability crisis as organizations and government agencies seek ways to offer residents places to live at reasonable costs.

Residents and nonprofits have worked to bring affordable housing to historic communities threatened by new development, and land trusts have been formed to keep properties affordable in places that could gentrify.

The region has seen challenges, however, including a 72-unit apartment complex in North Charleston built for senior citizens that has been sitting vacant for more than a decade. The Osprey Pointe buildings on Baker Hospital Boulevard haven't been torn down due both to high demolition costs and property owners hoping to lure developers with tax incentives aimed at redeveloping abandoned buildings.

Patrick Hill, a broker with Harbor City Real Estate Advisors LLC who is leading the potential sale of the site, said the property could soon see some big changes.

The structures, which rest on 11 acres near the Ashley River, were acquired by Osprey View LLC for $350,000, according to Charleston County property records. The property is for sale for $4.5 million.

Changes could be coming to the Osprey Pointe apartment buildings in North Charleston.

Hill said the site has gotten letters of intent from three companies, two in state and one out of state, which hope to establish mixed-use buildings, including residential, commercial space and a hotel.

The finalization of those plans largely depends on the details surrounding the adjacent property, where the Charleston County Parks and Recreation Commission plans to establish indoor sports facilities and an athletic campus, Hill said.

“We don’t want to have someone go in there and put up a structure that really isn’t going to benefit the community," Hill said.

The buildings, located between Interstate 26 and the river, have seen a variety of uses over the years.

State documents show the property was first developed in the 1880s as a phosphate fertilizer production facility before operating as a staging area in the 1960s during construction of the interstate.

During that time, some areas were excavated to 30 feet deep, after which Charleston County used the burrow pits as a landfill from late 1960 to 1980, and the site accepted construction and demolition debris, tires and other waste materials.

In 2007, seven years after the apartments opened, city officials condemned them due to structural issues, forcing the elderly residents to find somewhere else to live.

Changes could be coming to the Osprey Pointe apartment buildings in North Charleston.

Councilman Michael Brown, who represents the district containing the property, said the foundation of the building was sinking. He wondered whether those involved in the development properly examined the land before breaking ground.

"I guess they didn’t pay attention to what they were building on, or didn’t do proper investigation," he said.

The city ordered the complex to be demolished after it went before the city's Public Safety and Housing Committee in 2017. But tearing down the buildings would have been a costly endeavor for the city, said spokesman Ryan Johnson, who noted North Charleston would have had to pay $250,000 to have the abandoned apartments demolished.

That price tag has likely increased since then, he added.

"It's not an ideal situation," Johnson said. "We don't want any abandoned properties in North Charleston."

One could utilize the S.C. Abandoned Buildings Revitalization Act, the site's Opportunity Zone designation and possibly other incentives to offset development costs.

Regarding environmental assessments into the site, shortly after Osprey View LLC purchased the property, the owners worked with the S.C. Department of Health and Environmental Control on a voluntary cleanup in 2018. In-ground wells were installed on the site, and construction guidelines were established, which prohibits the construction of single-family homes on the property.

Regarding demolition, Hill noted he's gotten three quotes to get the buildings torn down. He said plans to bulldoze them will likely begin sometime this year, after someone has bought the property.

"I foresee that something will be happening in 2020 that will be really exciting for the site,” Hill said.

Hill said he's been in communication with CCPRC regarding their plans to bring recreational activity to the area.

CCPRC announced in 2018 that a 50-year lease had been reached with the United States Performance Center to bring athletic amenities to the North Charleston property.

On the site, indoor facilities will have space for tournaments, schools and recreation departments for sports such as basketball, volleyball, gymnastics, cheerleading and karate. There will also be multi-purpose trails, green space, picnic tables and benches, and outdoor volleyball courts.

A spokeswoman with the commission said CCPRC doesn't have concerns about the site of the future park being near abandoned buildings.

"Currently our new park is still in the conceptual planning stage; therefore, we don’t have any immediate concerns over the nearby private property," said Renee Dickinson, director of marketing with CCPRC.

Changes could also be coming to the occupied apartment complex nearby. North Charleston City Council members recently received a letter from Standard Communities, which identifies itself as one of the 50 largest affordable housing owners in the nation. It announced plans to purchase the nearby Osprey Place Apartments and spend $4.5 million to rehabilitate the affordable housing subdivision.

"Standard Communities was founded to create, preserve, and improve affordable, workforce, and mixed-income housing nationwide," wrote Thomas Attridge, head of the company's Southeast operations. "Standard is committed to investing in communities both physical and social, to improve quality of life and provide residents with stability and opportunities for upward mobility."

Attridge confirmed to The Post and Courier that he had sent the letter but would not discuss specific plans.

“We hope that area continues to grow and do well," he said.

The now-abandoned Osprey Pointe development was built using federal tax credits approved by the state. When the development was condemned, the S.C. State Housing and Finance Authority placed the property in permanent noncompliance status and notified the IRS.

Such situations usually then become a matter between the IRS and local municipalities for code enforcement, said Clayton Ingram, a spokesman for the housing agency.

"Fortunately, this seldom happens," Ingram said. "But as administrators for the tax credits, our ultimate penalty is to place them in permanent noncompliance."

A spokesman with the IRS cited federal law in stating that the agency cannot discuss specific tax cases.

The empty structures have raised safety concerns considering its location near an apartment complex that contains units for 100 families as well as a nursing home.

In past years, vandals and thieves have stolen scrap materials from the abandoned site.

Hill said property owners have met with fire and police officials at the property and noted that valuables, such as copper, are no longer in the abandoned buildings.

They city also says it has been monitoring the area and is ensuring the buildings stay boarded up to prevent criminal activity.

Dennis Schimpf filed a defamation and negligence lawsuit in Berkeley County this week, alleging the website inaccurately reported that his Woodford Street home was in foreclosure.

Plans for a 149-unit senior living facility on a busy thoroughfare in North Charleston is moving forward after being stalled for a decade.