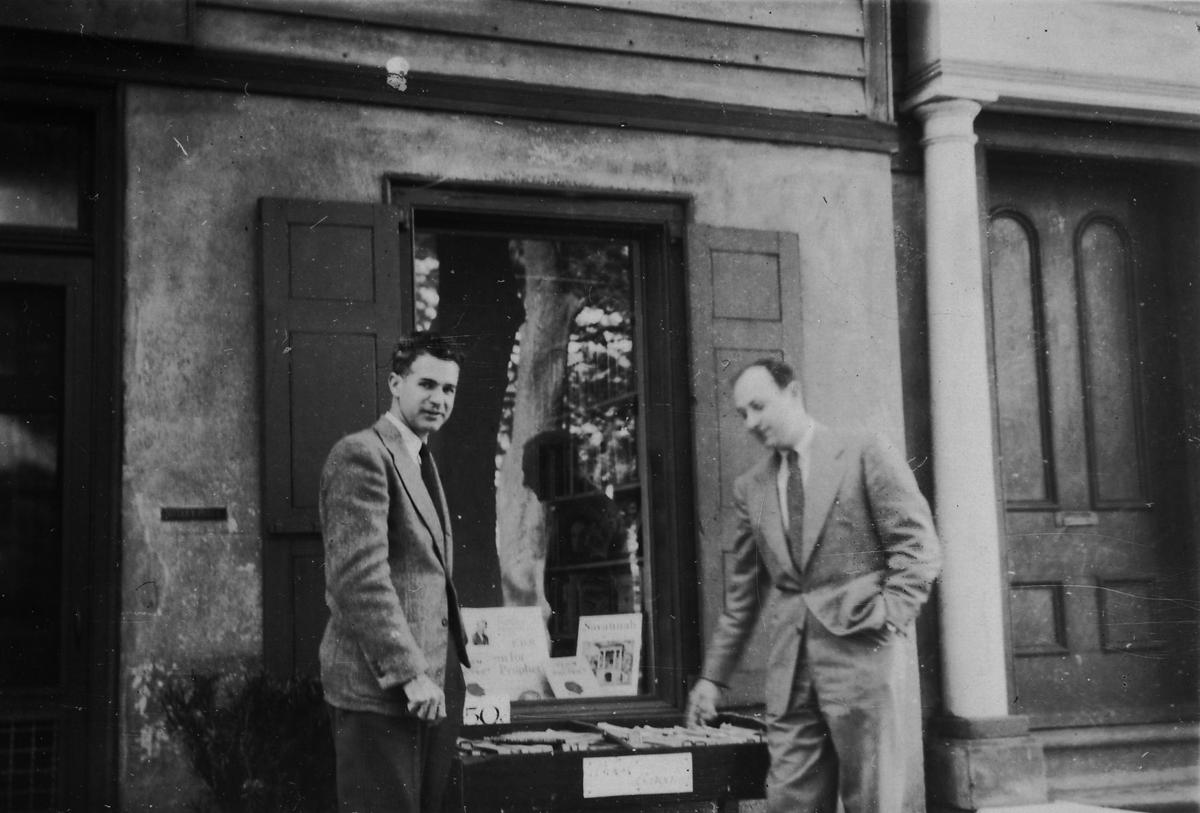 Edwin Peacock (left) and John Zeigler (right) stand in front of the bookstore they ran from 1946 into the 70s. Zeigler and Peacock were partners for 49 years. The pair made significant contributions to Charleston's social and cultural scene. Their shop, the Book Basement, was on the corner of Green and College Streets. Now, the building houses the college's communication department. Provided 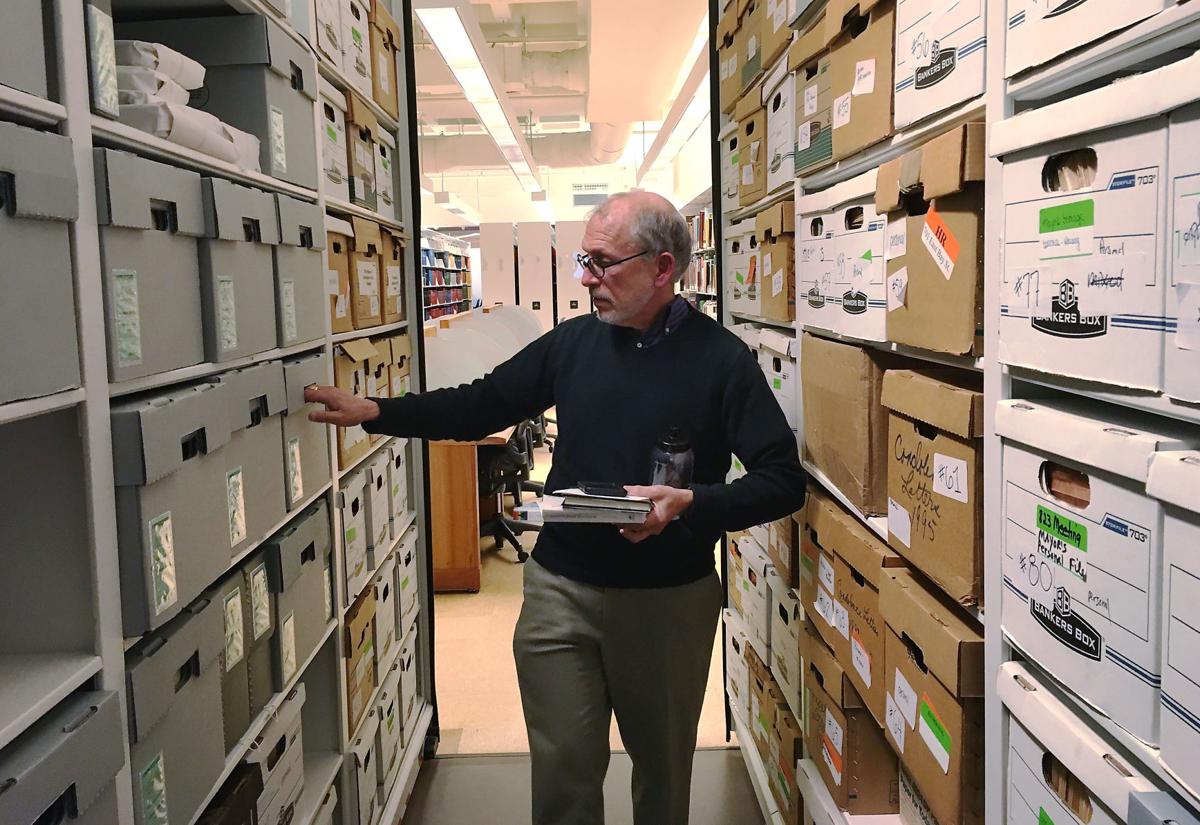 Harlan Greene is head of special collections at the College of Charleston. File/Adam Parker/Staff 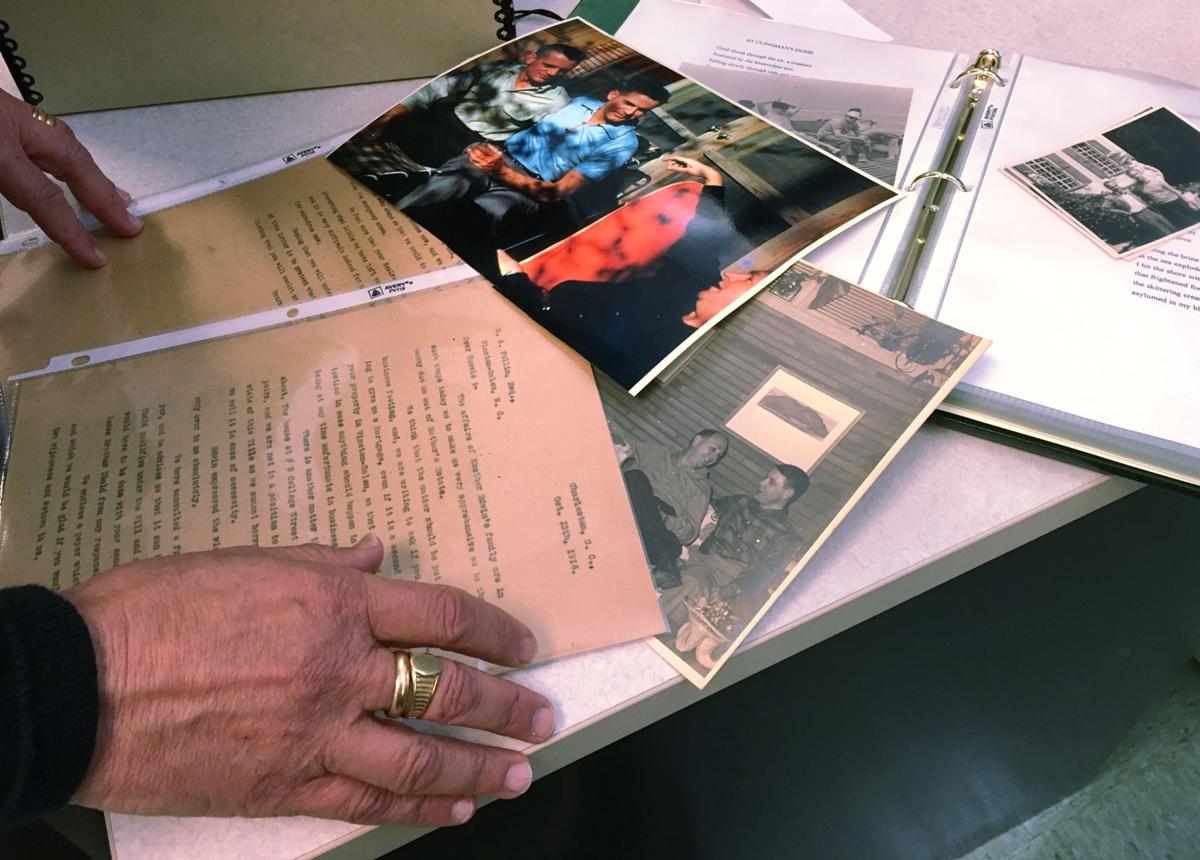 Edwin Peacock (left) and John Zeigler (right) stand in front of the bookstore they ran from 1946 into the 70s. Zeigler and Peacock were partners for 49 years. The pair made significant contributions to Charleston's social and cultural scene. Their shop, the Book Basement, was on the corner of Green and College Streets. Now, the building houses the college's communication department. Provided

Harlan Greene is head of special collections at the College of Charleston. File/Adam Parker/Staff

The phrase is one of Harlan Greene’s favorites.

Greene, the special collections scholar in residence at the College of Charleston, knows how empowering history can be — especially for the communities that have been systematically erased from past historical narratives.

For decades, the stories and documents of lesbian, gay, bisexual and transgender South Carolinians have been overshadowed and overlooked, as librarians and historians largely prioritized records from the lives of wealthy, elite white men.

The College of Charleston is hoping to change that.

Just a few years ago, evidence of LGBTQ programming at the college was scarce. In 2016, a graduate student walked into the special collections library hoping to find information and resources on local LGBTQ history.

That realization is what eventually led Greene to apply for grant funding to establish the Documenting LGBTQ Life in the Lowcountry Project, one of the only initiatives solely dedicated to preserving and documenting lesbian, gay, bisexual and transgender histories in South Carolina.

Without an organized effort to preserve these histories, the stories of older members of the community often die with them, Greene said, resulting in an urgent need to preserve LGBTQ culture and records from the past before they disappear.

The LGBTQ archive project has two major components: an oral history initiative and an effort to collect physical records and documents cataloging gay history in the Lowcountry.

Experts agree that preserving the history of this community is crucial, but funding hurdles and a lack of widespread institutional support mean that the future of the project, much like the stories and documents it hopes to preserve, is in jeopardy.

Since it was founded, the project has been supported financially almost exclusively through third-party grants and community fundraising.

The project’s primary donor, The Gaylord and Dorothy Donnelley Foundation, provided a $200,000 cash infusion in 2017, allowing the project to employ a full-time archivist and part-time oral history specialist. Last year, the project also raised $50,000 from two philanthropic donors. An additional $30,000 or so was raised from the community.

But with funds running out, the team is working against the clock to collect and preserve as much as it can before it's too late.

“Our archivist is planning to leave in September, because we don't have the funds to keep her on board,” Greene said. “I can keep our half-time person on for maybe eight or nine more months.”

If a lack of funding causes the project to be sidelined, Greene said, the physical records could at least be collected and processed at a later date. Oral histories are harder to capture, since the generation of community elders will continue to get older and older.

Even if the project is eventually revitalized later on, he said, its existing momentum will be lost, not to mention the project’s larger connection to the community and the college itself.

Earlier this year, Greene was gearing up to lobby college officials to support the project financially. Then, in mid-March, South Carolina began to grapple with the impacts of the coronavirus pandemic. Colleges and universities statewide were forced to close their doors, putting all talk of additional funding on hold.

He remains hopeful that he’ll eventually be able to apply for additional grant money in the fall once the Donnelley Foundation starts a new funding cycle, but there aren’t any guarantees.

But in recent weeks, a CofC alumnus has stepped forward to create a new philanthropic fund dedicated to the project.

“This will be the first time that the college actually has a named fund for LGBTQ archives, and that might help us to fund things and bridge us to keep us going so that we have not lost our momentum,” Greene said.

Still, he said, the fund and the possibility of more grant funding “would all be stopgap measures to try to keep us going until maybe the college made a commitment to actually sustain us.”

The College of Charleston’s Dean of Libraries, John White, said the school has taken steps in recent years to become a more inclusive and diverse institution and sustaining the work spearheaded by the Documenting LGBTQ Life in the Lowcountry Project remains a top priority.

Over the past two years alone, the college has dedicated almost $60,000 to purchase additional LGBTQ databases and materials within the college’s library system, he said. The college is also actively seeking to recruit a new director of special collections who understands the significance of highlighting the stories of minority communities that have been overlooked in the past.

And, he said, “We've gone from this not being written into any of the permanent staff responsibilities in the library to making it a core function for two full-time permanent faculty positions within the department,” adding that it’s one of the college’s long-term goals to incorporate the project’s directives across multiple divisions.

“We have a population of students who, at times, perhaps felt unheard or unrecognized by the college,” White said. “I hope this makes them feel more comfortable at home on the campus and more importantly, I hope it sends the message to our current students and community that their stories matter.”

Working against the clock

If the project had only been established a few years earlier, historians could have captured the story of John Zeigler, a gay Charleston resident who opened an inclusive bookstore with his longtime partner in the 1940s, before he died in 2015.

“It's unfortunate that it's taken this long, because we have lost so many people,” said Brandon Reid, the project’s oral history coordinator.

Many of the individuals Reid hopes to interview for the project’s oral history component are older members of the community, the ones who remember what it was like when homosexuality was still illegal. Because of their age, these are the same people who are at an increased risk of contracting and dying from the COVID-19 virus.

“Not only are they at a much higher risk when it comes to COVID, they’re not as equipped to handle the new technologies,” he said.

Still, he said, work on the project is continuing. It just looks a little different.

Rebecca Thayer, the project’s archivist, has been preparing for an event next month that aims to improve Wikipedia’s grasp on the subject of LGBTQ history in the Lowcountry.

“There's not a lot about local LGBTQ history on Wikipedia. And what there is are very short articles that haven’t been developed in years,” she said. “Because it’s user contributed and people aren’t paid, unless you have someone really interested in a topic area, it's not going to be on Wikipedia.”

The project has been in contact with professors, scholars and students who will be provided with the digital resources they need to effectively flesh out stories on prominent gay figures in Charleston.

A catalyst for change

There’s still work that needs to be done within the project and within the field of archival studies as a whole to capture the stories of traditionally underrepresented minority communities, especially people of color, Reid said. He hopes that in the future the project will be able to hire more staff members who have connections to these communities.

But since the project was formed in 2018, it has served as a catalyst for change on campus in more ways than one.

The program's staff did not just stay in the library, but began joining in student-led activities, bringing LGBTQ topics to the forefront, sponsoring programming and raising visibility on campus.

“Because our program ostensibly focused on the past, we are actually helping to change the present as well,” Greene said.

This is essential, he said, especially because nearly one in five students at the College of Charleston self-identify as LGBTQ.

“This is not just a historical project," he said. "We're helping raise the visibility of the college and the LGBTQ community.”