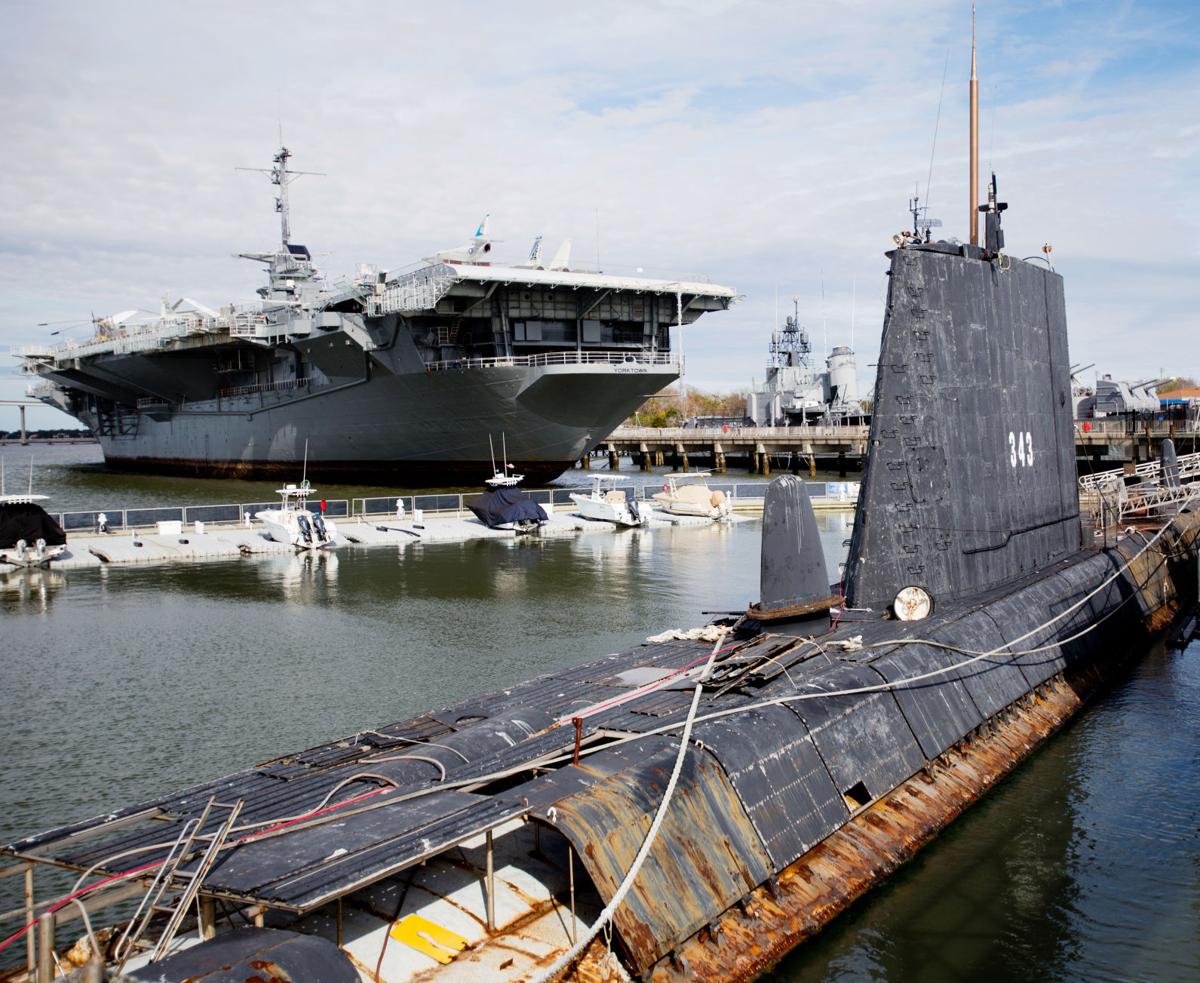 The submarine Clamagore decays while docked at Patriots Point beside the aircraft carrier Yorktown on Wednesday Dec. 11, 2019, in Mount Pleasant. Gavin McIntyre/Staff 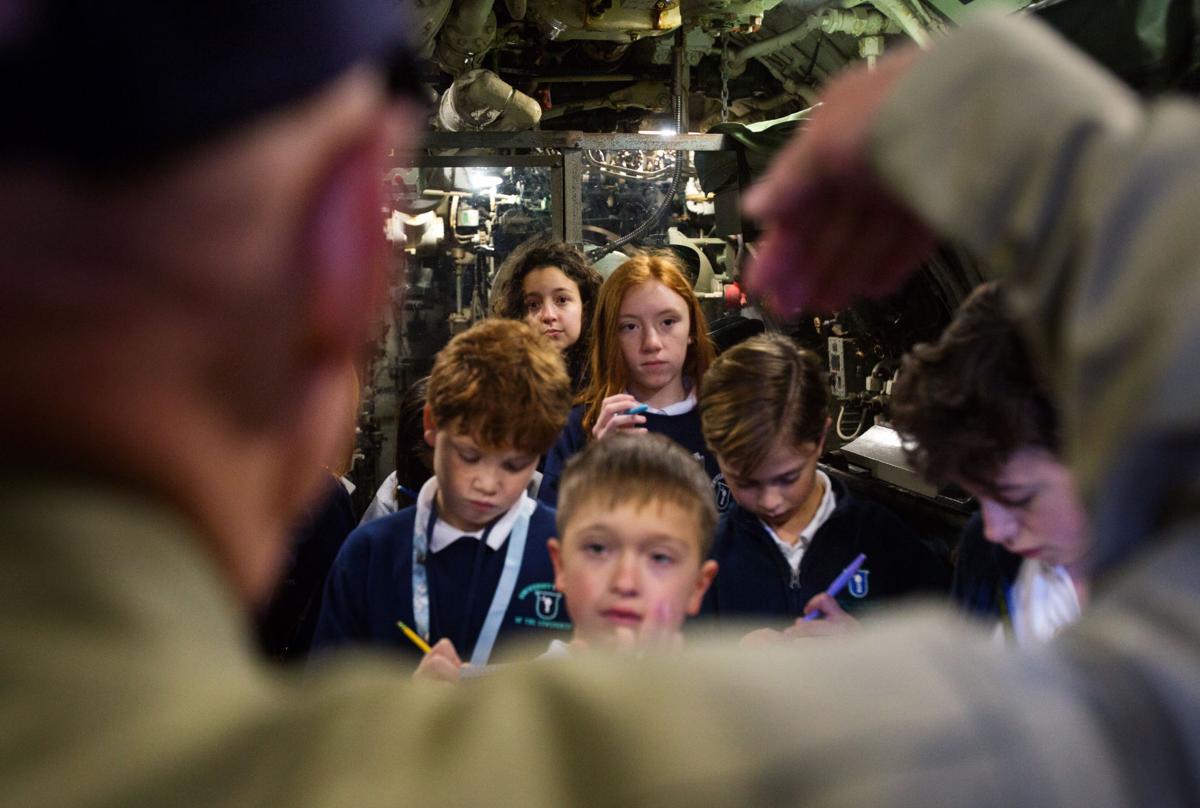 University School of the Lowcountry students to listen to Sid Busch describe the forward torpedo room on the submarine Clamagore at Patriots Point on Wednesday Dec. 11, 2019, in Mount Pleasant. Gavin McIntyre/Staff 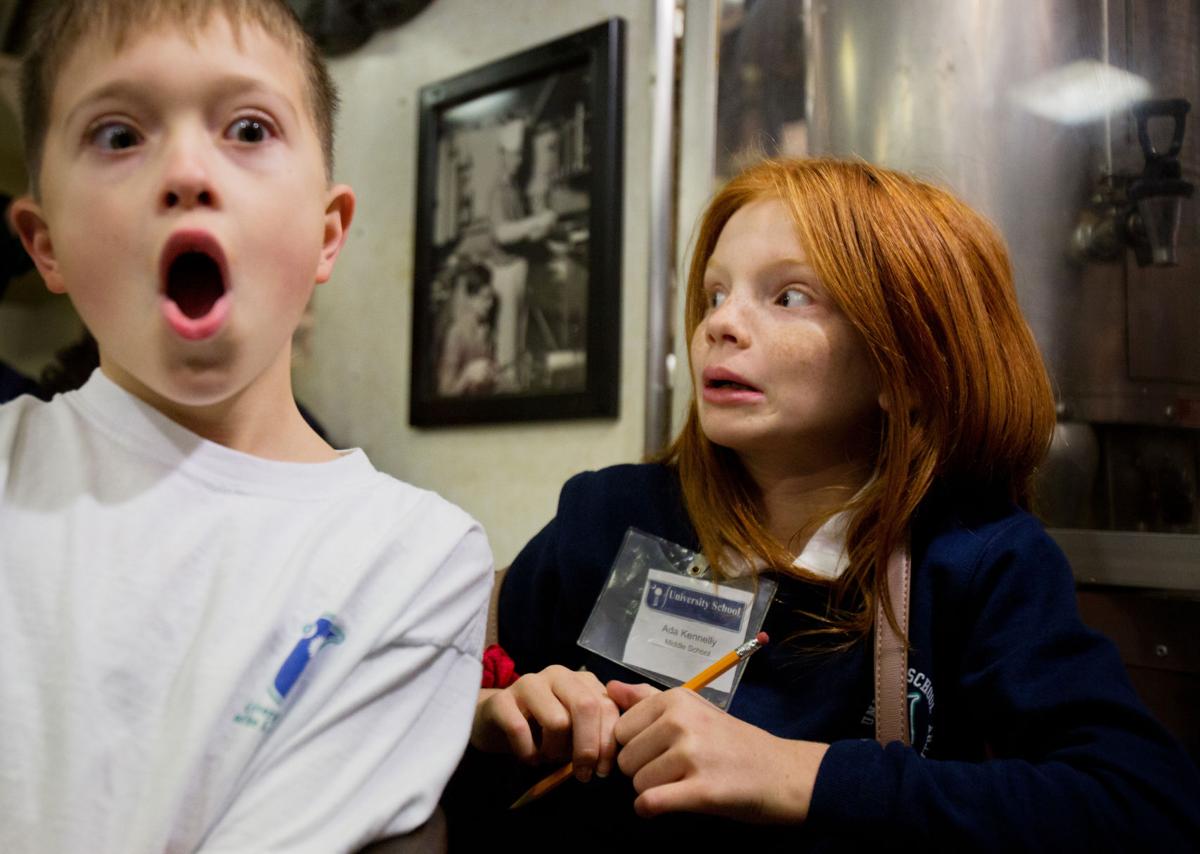 Maxwell Manchester, 9 (left), and Ada Kennelly, 12, react with surprise after hearing 84 people served on the Clamagore during a tour with their class from the University School of the Lowcountry at Patriots Point on Wednesday Dec. 11, 2019, in Mount Pleasant. Gavin McIntyre/Staff

Sid Busch was standing near the ticket office at Patriots Point two weeks before Christmas, not far from the submarine he once served on, awaiting dozens of students he would take on a tour.

Time is getting short to tour the USS Clamagore. The sub at the Patriots Point Naval & Maritime Museum is expected to be permanently closed to the public in late spring.

That's when the museum expects to begin work cleaning and preparing the 1945 submarine to be "reefed" — taken offshore and sunk to become a home for sea creatures.

"Sometimes it's depressing, like watching your favorite dog get put to sleep," said Busch, who volunteers at Patriots Point.

The 322-foot diesel submarine built during World War II was in the Panama Canal headed for action in the South Pacific when the war ended.

The Clamagore patrolled off the Florida coast during the Cold War and was upgraded twice before being decommissioned in 1975 and retired to the military museum at Patriots Point in 1981.

The Patriots Point website describes the Clamagore as "the only GUPPY III submarine preserved in the U.S." and an "iconic Cold War submarine."

For those who were in the Silent Service, and those who recall the days when Charleston was the second-largest submarine base on the East Coast, the Clamagore is an important part of history. In 1989 it was designated a National Historic Landmark.

For Patriots Point, however, the decaying submarine has become an expensive burden that the maritime museum estimates would cost more than $9 million to restore. Even cleaning and reefing the Clamagore would cost millions.

“Having three ships to maintain is just too expensive," said Chris Hauff, spokesman for Patriots Point. “The (aircraft carrier) Yorktown is our flagship, and we have a lot of repairs to make."

Patriots Point still owes the state $8 million from a $13 million repair project on the World War II destroyer Laffey. To finance ship maintenance and repairs, Patriots Point has agreed to lease much of the waterfront land it controls to a developer.

A lawsuit aimed at saving the sub, filed by the USS Clamagore SS-343 Restoration and Maintenance Association, is still working through the court system. Barring an injunction, Patriots Point plans to keep on with the fishing reef solution.

“The lawsuit is there, but until we’re told we can’t go forward we will continue with our plans," Hauff said.

Supporters of the Clamagore are frustrated that somewhere in Charleston an $80 million museum to showcase the Confederate submarine H.L. Hunley is planned.

"If I could somehow prove the Clamagore went back in time and participated in the 'war of Northern aggression' we'd get all the money we need," said Busch.

On Dec. 11 he led students from University School of the Lowcountry on tours of the sub. They went in small groups and some gasped when they learned her cramped quarters were once home to 84 submariners.

The school's students are known for conducting exit polls during local elections and, because Head of School Jason Kreutner is a Clamagore supporter, they have asked voters in the past several elections if they would like to see the Clamagore saved at Patriots Point. Consistently, about 70 percent have said "yes" in those polls.

Although the lawsuit over the reefing plan continues, Busch is prepared for the day when the Clamagore could be towed out to sea and sunk.

"I'm going to come down to see her off, then I'll go home and cry a lot," Busch said.