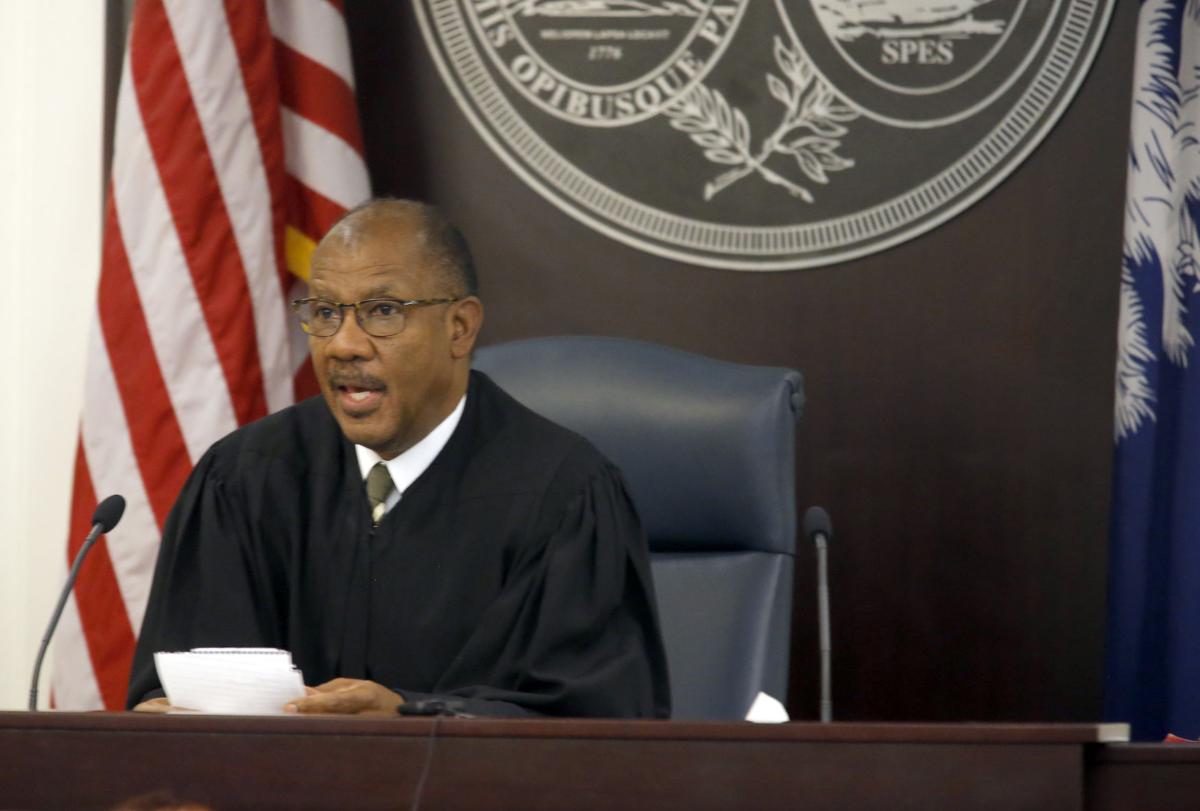 Judge Clifton Newman reads requests from the jury for copies of testimony as they spend the day in deliberations for the Michael Slager murder trial Thursday, Dec. 1, 2016, in Charleston, S.C. Grace Beahm/Staff 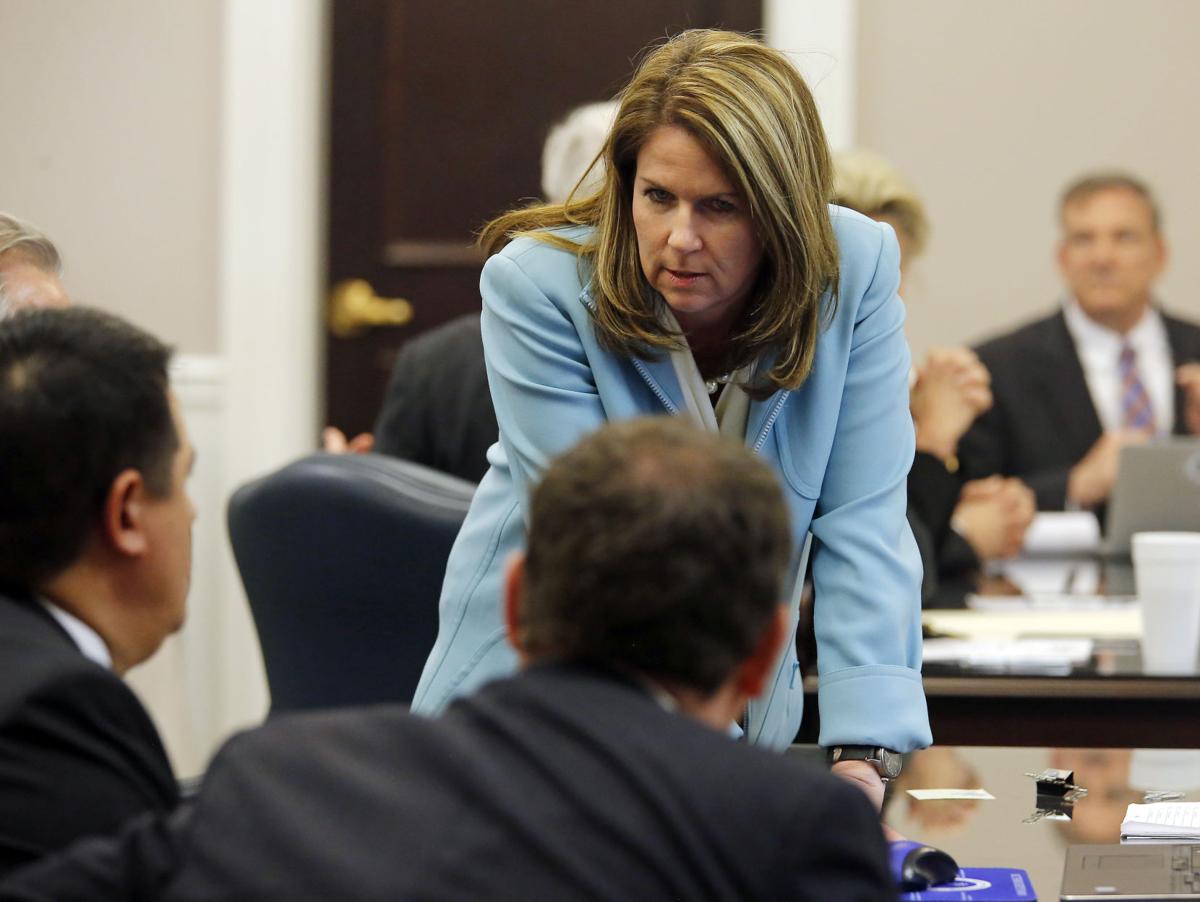 Ninth Circuit Solicitor Scarlett Wilson discusses the jury's request with her team as they spend the day in deliberations for the Michael Slager murder trial Thursday, Dec. 1, 2016, in Charleston, S.C. Grace Beahm/Staff 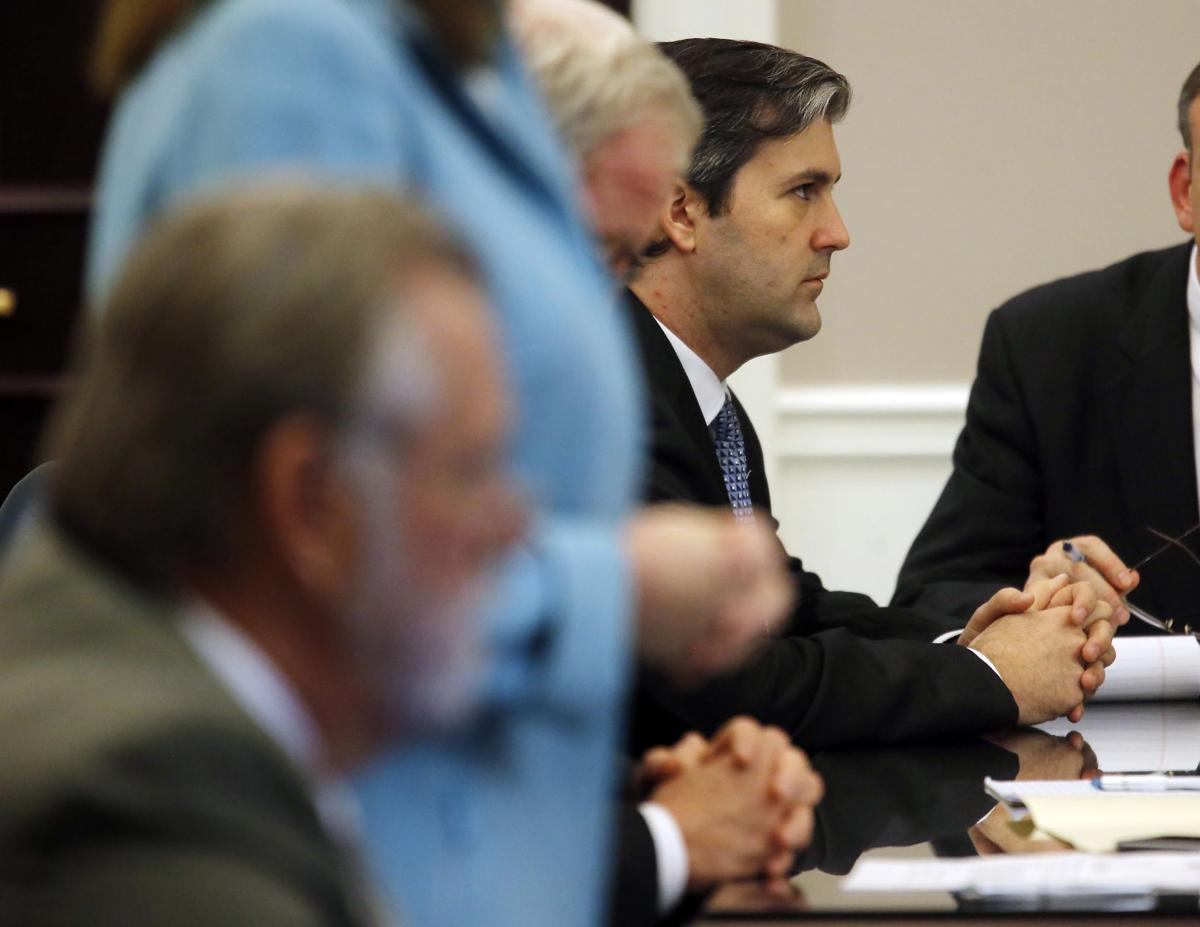 Former North Charleston police officer Michael Slager listens to the requests from the jury for a written copy of his testimony and of SLED Agent Angela Peterson as they are in deliberations for his murder trial Thursday, Dec. 1, 2016, in Charleston, S.C. Grace Beahm/Staff

Judge Clifton Newman reads requests from the jury for copies of testimony as they spend the day in deliberations for the Michael Slager murder trial Thursday, Dec. 1, 2016, in Charleston, S.C. Grace Beahm/Staff

Ninth Circuit Solicitor Scarlett Wilson discusses the jury's request with her team as they spend the day in deliberations for the Michael Slager murder trial Thursday, Dec. 1, 2016, in Charleston, S.C. Grace Beahm/Staff

Former North Charleston police officer Michael Slager listens to the requests from the jury for a written copy of his testimony and of SLED Agent Angela Peterson as they are in deliberations for his murder trial Thursday, Dec. 1, 2016, in Charleston, S.C. Grace Beahm/Staff

Nine hours into their verdict deliberations Thursday, jurors sent a note to a judge presiding over the trial of the former North Charleston policeman who killed Walter Scott: They asked for the difference between "fear" and "passion."

The judge didn't immediately answer, but the question made it apparent that they were torn over voluntary manslaughter, the lesser of the charges that Michael Slager now faces at the end of his month-long murder trial.

While Slager said he feared for his life when he fatally shot Scott, killing someone in the "heat of passion" is the central element of manslaughter under South Carolina law.

"This question isn't artfully worded," Circuit Judge Clifton Newman said, "but I think you get the gist of what they're pondering."

Slager, 35, was arrested on a murder count last year after an eyewitness video showed the white officer shooting Scott, a black man, in the back. It wasn't until his trial neared an end this week when prosecutors proposed that the jury also consider the lesser crime that carries between two and 30 years in prison, opposed to murder's 30 years to life. The judge agreed.

In dispute over what any response to the question should say, defense attorneys and prosecutors are expected to propose options to the judge Friday morning. At the same time, the jury's deliberations will resume. The judge could decide not to answer it.

Assistant Solicitor Chad Simpson, on the four-member prosecution team, suggested that fear and passion are synonymous. He cited a 2010 ruling by the S.C. Supreme Court, which said in State v. Starnes that "where there is an intentional killing based on fear alone, a defendant would be entitled to a voluntary manslaughter charge." But the same decision cautioned courts not to blend the elements of manslaughter and self-defense.

For manslaughter, the officer had to have been provoked into opening fire "in the heat of passion," or an emotion that bubbled to the surface during his confrontation with Scott, driving him to uncontrollably pull the trigger.

But a successful self-defense argument could defeat both allegations. Slager testified that Scott grabbed his Taser during a fight and tried to use it against him. In "total fear" for his life, Slager said, he shot Scott, who was running away, until the threat subsided.

To overcome his self-defense claim, prosecutors had to prove that Slager's fear of imminent danger wasn't reasonable.

"They're focusing in on the manslaughter possibility, but they're unclear, if they accept (Slager's) testimony that he was in fear, whether that qualifies as passion," said Charlie Condon, a Mount Pleasant lawyer and former state attorney general who has followed the trial. "It's a fair question for them to ask."

The jury's question was its second of the day. Three hours earlier, the jurors had asked to read the courtroom testimony from Slager and the state agent who interviewed him after the shooting. Normally, they must rely on their notes or memory about the 55 witnesses who testified in the trial, but opposing attorneys and the judge agreed to have transcripts readied for them.

Slager testified in his own defense earlier this week, and case Agent Angela Peterson of the State Law Enforcement Division took the stand for the prosecution earlier in the trial. Peterson wrote notes about her interview with Slager. She testified about what Slager said, but the defense contended that key details about the rookie agent's documentation were wrong.

Scott's family members and their attorneys left the courtroom and walked out into a dark night in downtown Charleston. The loved ones, investigators, a local activist and Feidin Santana, the man who filmed Scott's death, had spent most of the day lounging on wooden benches outside the courtroom, waiting and hoping for a verdict. Outside, they passed a line of TV cameras and reporters also anticipating some news. The lawyers shook their heads, unwilling to hazard a guess about what the jury's latest query might mean.

One of the half-dozen alternate jurors, who were dismissed once the deliberations began, also had waited there. As the judge remarked a day earlier, when he sent the alternates home, that he understood how invested in the case they had become, the woman nodded her head in agreement.

The former juror sat in a spectator pew behind Slager's family. She felt obliged to the see trial through its end. The jurors had not talked about the case before deliberations, she said, so what they are thinking is anyone's guess.

Any verdict — guilty or not — must be unanimous. The jurors would resort to the manslaughter charge if they could not agree on murder. A unanimous not-guilty vote on both charges would acquit Slager.

A plea for prayer

Since the video of it surfaced last year, Scott's shooting has raised ire among local community advocates who called the killing the latest in a long line of unfair practices by officers from the North Charleston Police Department.

But local authorities joined advocates in calling for calm as the trial neared a close. And calm has prevailed.

"We just continue to believe in God," Anthony Scott, a brother of Walter Scott's, said this week, "and ask for your continued prayer for the city, the state and the country."

The shooting came amid a string of police-involved deaths nationwide that prompted close scrutiny of officers' use of force against black people. But many of the others have not brought criminal charges.

Slager was jailed three days after the slaying, when the footage emerged publicly. Scott's family praised the swift response.

Still, such charges are not the norm. On the day the jury started deliberating in Slager's murder trial, a prosecutor in Charlotte announced that no charges would be filed in the September shooting of Keith Lamont Scott, the Charleston native whose death sparked violent protests in North Carolina. He was not related to Walter Scott. The prosecutor said that he had a gun and that the policeman was justified for shooting him.

Video of that encounter wasn't as clear as the one that landed Slager in jail and served as the key piece of evidence for prosecutors in his trial.

The footage is why local communities never spiraled into unrest as residents opted for a constructive push for change, said Muhiyidin d'Baha, a leader of the area's Black Lives Matter movement. They knew the truth, he said, before the police knew the truth.

D'Baha milled outside the courtroom Thursday with Santana, who filmed the shooting. The SLED agent lay on a wooden bench outside the door.

"Right now, we have a lot of indictments and not a lot of guilty verdicts," he said. "This is a huge opportunity for the nation and for the movement, for us to actually be able to get ahead."

'Trust in the police'

To prove murder against Slager, prosecutors had to show that he acted with malice, or ill will, when he killed the 50-year-old Scott on April 4, 2015. That Slager shot Scott in the back as Scott ran away was cited as key evidence of malice.

The patrolman stopped Scott's car for a broken brake light, then gave chase once the motorist ran. A confrontation ensued about 200 yards later when Slager used a Taser on Scott. Soon after the men stood, Scott turned away and started running.

Slager has said that when he started pulling his pistol from its holster, he was still facing Scott, and they were touching. It took him about 1.5 seconds to pull the gun out and fire. Five of the eight shots hit their target. Scott died there.

The jury had visited the site briefly before they heard closing arguments and started deliberations. Much is riding on its decision, D'Baha said.

He noted North Charleston Citizens' Advisory Commission on Community-Police Relations, a board created in the wake of Scott's death. Local activists this week distanced themselves from the effort, expressing lingering concerns over the extent of the commission's authority. It's expected to review complaints about police, but it would have no power to fire officers or force them to speak.

D'Baha said a conviction would give the board's detractors a better argument because it would show how community members like Santana can serve as a check and balance.

"It will make a much stronger case that this kind of power of the community to hold officers accountable will be able to keep the city a lot safer," he said, "to help the community have trust in the police."

Brenda Rindge contributed to this report. Reach Andrew Knapp at 843-937-5414 or twitter.com/offlede.