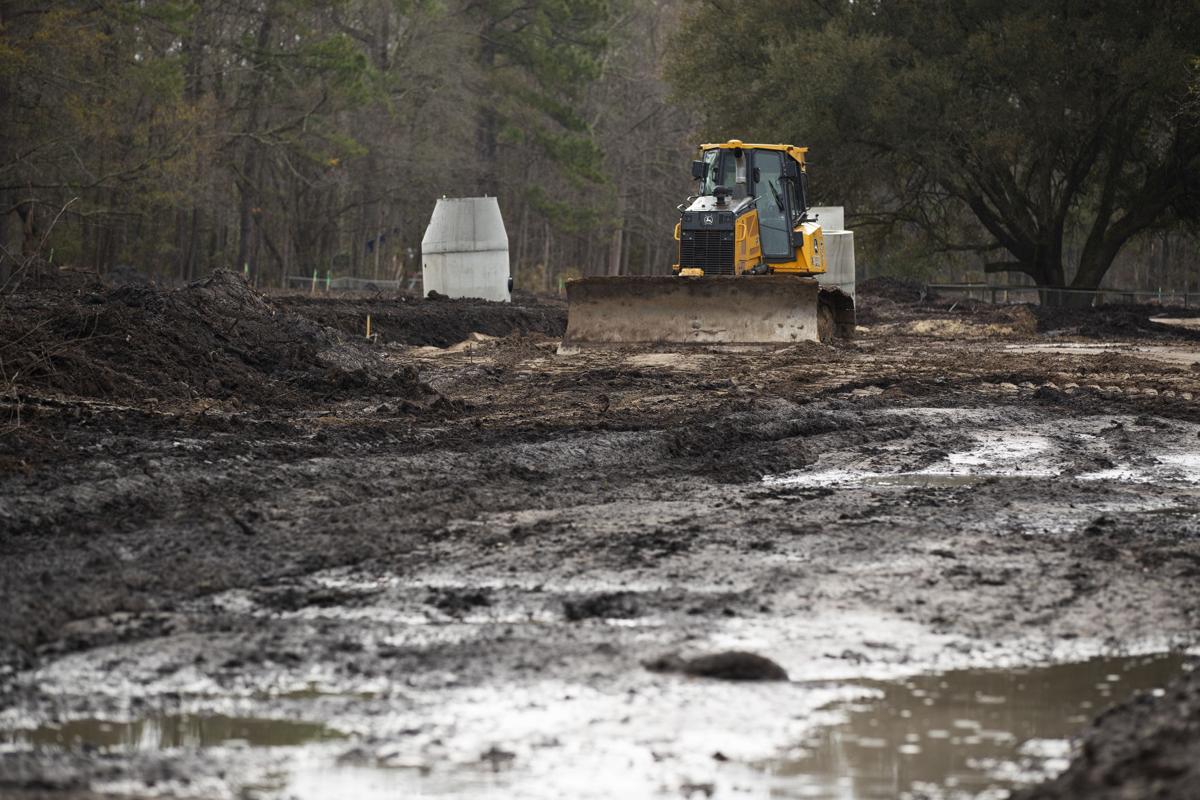 Machines used to move dirt around are parked on a vacant lot slated for development near the intersection of Maybank Highway and River Road on Johns Island on Tuesday, Feb. 18, 2020. More than 6,000 housing units on the island have gotten approval, but have not yet been built. Lauren Petracca/Staff 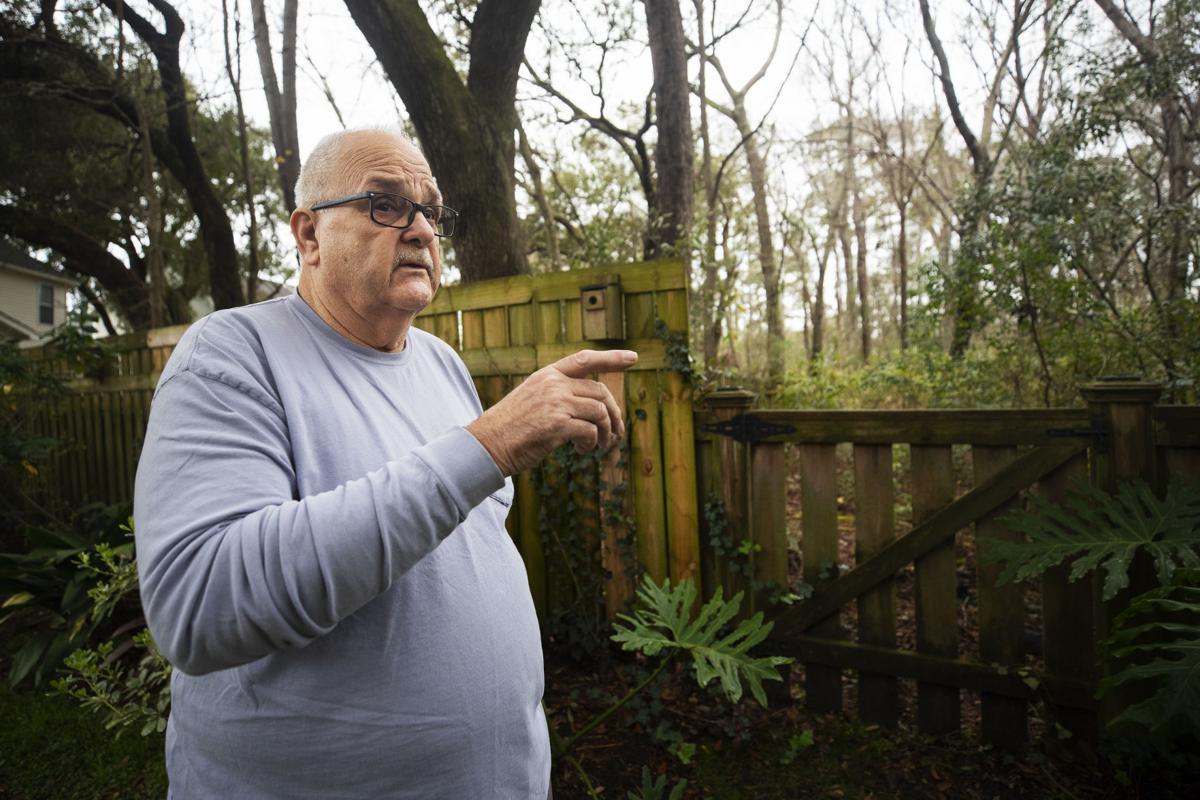 Thomas Haylash points to a strip of wetland and a newer housing development behind his property on Johns Island on Wednesday, Feb. 19, 2020. Haylash has added dirt and resodded his lawn in order to increase the elevation to fight back against flooding. Lauren Petracca/Staff

JOHNS ISLAND — One of the fastest-developing areas of Charleston has no end in sight for new building. More than 6,000 housing units are coming but not yet built.

At the same time, island residents have watched with worry as development pushes waters higher during rainstorms. Some feel the next time a serious storm comes, they'll be swamped.

One man has watched the strip of wetland between his house and a newer, higher development overflow into his backyard repeatedly. He's using sandbags and a pump to keep water away from his doorstep. Another woman had a stream run through her yard in a hard rain. That was after a builder cleared a nearby lot that used to be forested.

The sea island that for now is still a mix of commercial strips, suburban tracts, heirs property and family farms is Charleston's primary frontier of growth. Efforts to stem the rush there haven't gained traction: an attempted building moratorium flopped after being floated in 2019.

Residents worry that the island may fall victim to flooding issues that have happened elsewhere in the city. The Dutch Dialogues, a long-running effort to study how the region handles water and flooding, suggested limiting the use of trucked-in fill dirt used by many developers to lift housing lots. In some of the most vulnerable areas, the Dialogues report suggested nixing fill dirt entirely and building roads elevated on pilings so water could flow underneath.

While the city’s new regulations do create special standards for the areas of “known flooding,” and make developers create buffers around fill dirt, there is no area where they ban the dirt entirely.

"We know that this (building) process is unsafe, we know that it’s destructive, so why should we allow it to continue?" said Phil Dustan, an ecologist at the College of Charleston who has studied the island's watersheds.

Charleston's history of development-driven flooding issues has played out already in outer West Ashley. There, neighborhoods along Church Creek have been repeatedly flooded, and city consultants have said fill dirt was a major cause.

Charleston has already bought and demolished dozens of homes there. The city briefly paused building that area of West Ashley and later developed aggressive rules requiring builders that use fill to create extra water storage.

Charleston's Stormwater Program manager, Matt Fountain, said the watershed on Johns Island is different from that of Church Creek and requires a different approach. The city's new stormwater rules will make developers plan their retention systems to handle stronger storms and factor in an additional 2 feet of sea level rise in the future.

The idea is to make builders store the water that falls on their developments, Fountain said.

Meanwhile, Charleston County, which governs most of the land on the island, is looking to the city for inspiration. Spokesman Shawn Smetana said county officials are constantly tracking areas of possible flooding, and said "staff will continue monitoring initiatives and recommendations such as the efforts the city of Charleston has underway."

Activists have signaled alarm before over the pace of development on the island, including Dustan, who has described the island's native vegetation as "sponge forests" adapted to soak up water. He said clear-cutting forests is "an irreversible process, and it leaves everybody more vulnerable."

But in some cases, the drainage pipes and storage ponds developers have put in to compensate for drainage simply didn't account for all the water that was to come. The Barberry Woods neighborhood, built in 2001, was designed to assume only 2.4 acres would drain water to the tract; in reality, more than 280 acres drain there.

Issues there were compounded as new neighborhoods were built nearby over the next couple years. It came to a head in 2008, when a heavy rainstorm swamped streets for days, Fountain said. Charleston is now embarking on a study of how to retain water around the site.

Echoes of these problems are starting to bubble up elsewhere. Johns Island resident Tom Haylash of Maple Grove Drive, near Maybank Highway and Main Road, has watched water rise into his yard multiple times in the decade he's owned his home. It's gotten worse, he said, since a new housing development was built across the narrow strip of wetland across his backyard. The homes, which sold in 2017, are noticeably higher than his lot.

Haylash said he's reached out to the state and the city of Charleston and was told by a city engineer a drainage fix for his lot could cost tens of thousands. He used a pump in the past to move water to the street in front of his house, where it will drain to a retention pond, but a flood in December swamped his back yard anyway, wiping out $700 of sod he'd laid himself after the flood before.

He fears the flooding will only get worse and said he couldn't sell his house and move on without telling the new owner about the vulnerabilities.

'All over the place'

Paulette Golden is similarly worried that nearby building will create an increased problem on her land. She owns two lots next to her home on Hobson Drive, and the same December storm that made water rise in Haylash's yard sent a small creek of water flowing through her side lots.

Golden said the water was coming from the other side of her back fence where a new heating and air-conditioning business is being built. The previously forested lot had always retained water in large storms, Golden said, but much of the vegetation there was ripped out.

She called Charleston County and told them about issues she'd had. Smetana, the county spokesman, said stormwater inspectors visited the site and determined work had been done out of order. The county ordered builders to erect a sediment trap along the property line.

Richard Lingle, the owner of the HVAC business, said contractors didn't have time to bring in dirt to construct a retention pond before the rains hit in December. He asserted his builders were doing their job correctly.

Regardless, Golden now worried about what will happen to the yard, where she previously spent much of her time growing vegetables for her family. The family might one day sell the land, and like Haylash, she worried about selling property with flooding issues.

She said her problems were relatively small in the scheme of what's going on in the region, and water hasn't directly threatened her house. But she worries the problems will only increase.

"This is going on all over the place on this island, and it doesn't have to," Golden said.

Mikaela Porter contributed to this report.

EDITOR'S NOTE: This story has been clarified to add more detail on the city of Charleston's proposed stormwater rules.