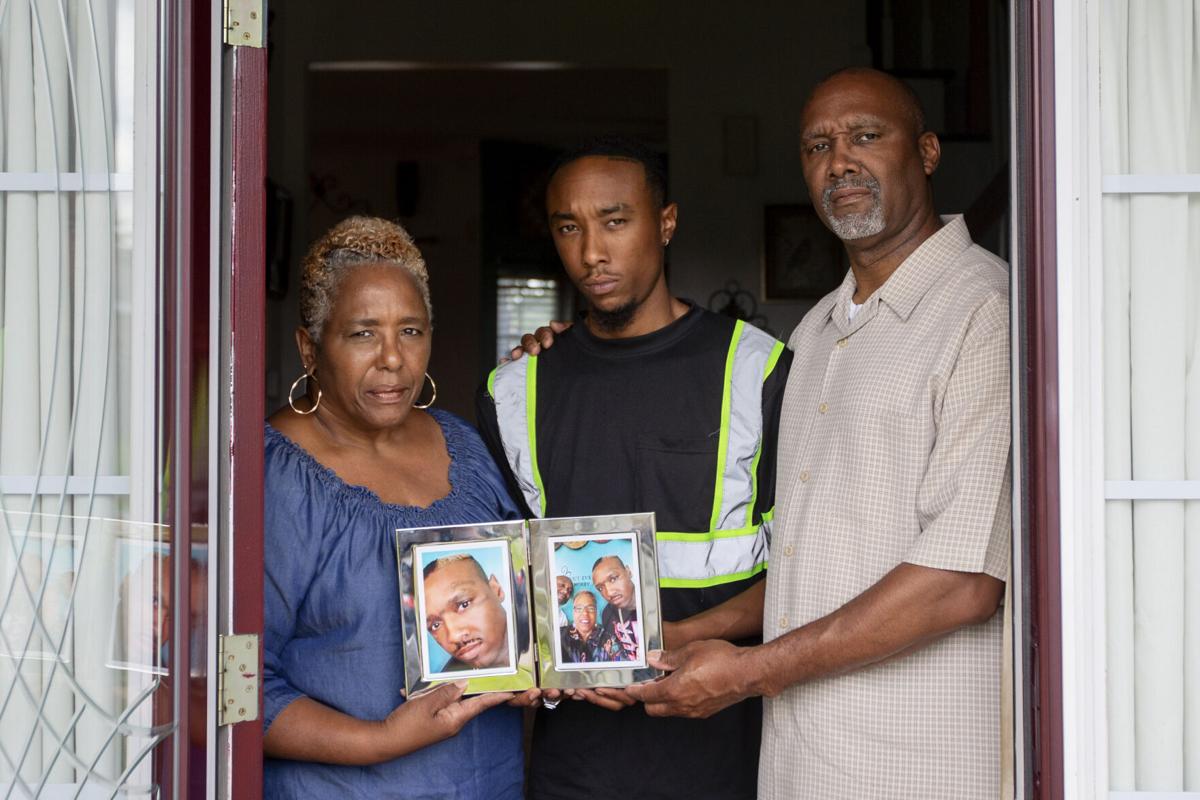 Amy Sutherland, her husband, James Sutherland Sr., and their son, Jamar, stand with photos of their son and brother, Jamal, at their home on June 23, 2021, in Goose Creek. Jamal Sutherland died at the Charleston County jail after sheriff's deputies forced him to the ground on his stomach and repeatedly used stun guns and pepper spray against him in January. File/Gavin McIntyre/Staff 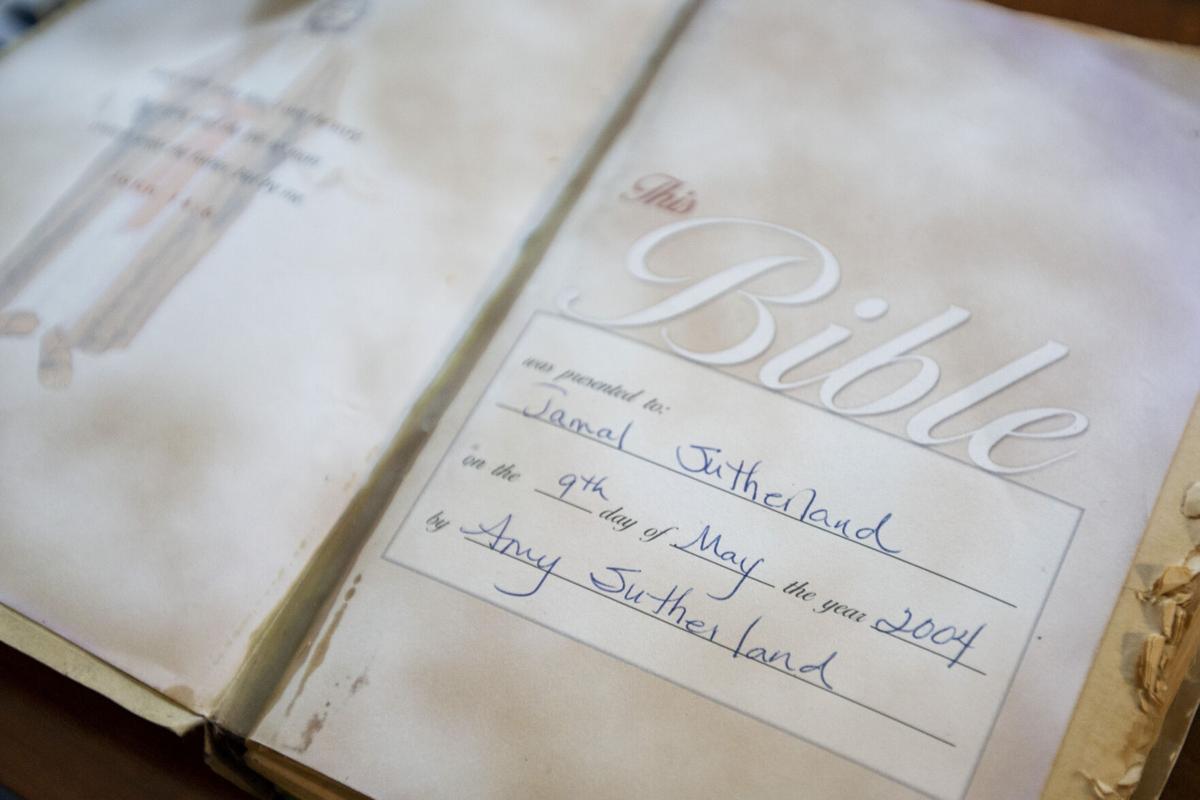 Jamal Sutherland's family describes him as a deeply spiritual individual who would keep a Bible in his car. Gavin McIntyre/Staff 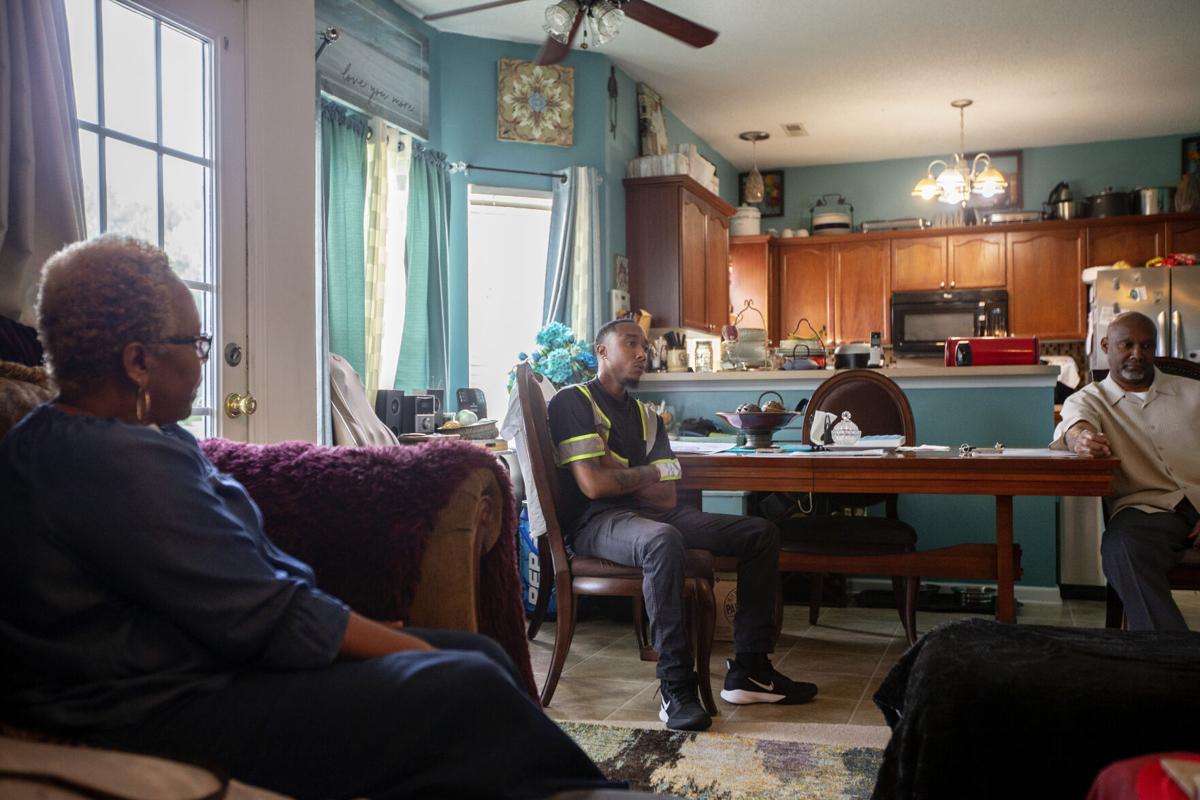 Amy Sutherland, her husband, James Sutherland Sr., and their son, Jamar, speak with Post and Courier reporter Gregory Yee about their son and brother, Jamal, at their home on June 23, 2021, in Goose Creek. Jamal Sutherland died at Charleston County jail after sheriff's deputies forced him to the ground on his stomach and repeatedly used stun guns and pepper spray against him in January. Gavin McIntyre/Staff 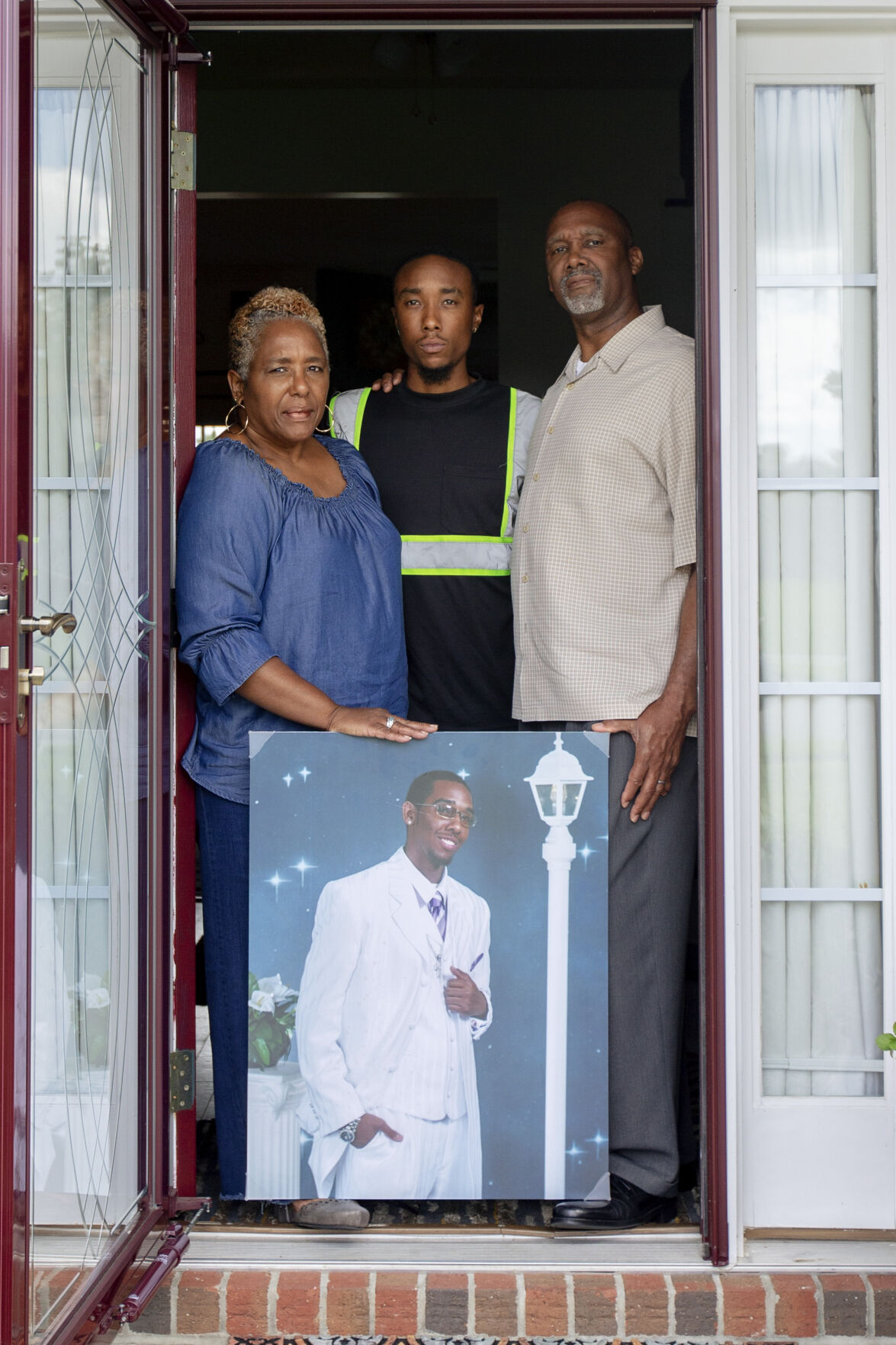 Amy Sutherland, her husband, James Sutherland Sr., and their son, Jamar, stand with a photo of their son and brother, Jamal, at their home on June 23, 2021, in Goose Creek. Jamal Sutherland died at Charleston County jail after sheriff's deputies forced him to the ground on his stomach and repeatedly used stun guns and pepper spray against him in January. Gavin McIntyre/Staff

GOOSE CREEK — The room is frozen in time, a reminder of the night everything changed.

There's a fresh spread of sheets on the bed, a brand-new pair of Nike Jordan shoes, new clothes and a new microphone. Nearly seven months later, they remain as they were, unused, final gifts for the departed.

Jamal Sutherland's faith stayed with him, his family says, even when the voices and visions started; even when the teachers and counselors didn't believe him; even when people judged him for the tattoos on his face or the way his hands curled up like claws from his medications; even, they believe, years later, when he was pepper-sprayed, shackled and shocked in a cell; even when the end was near.

Sutherland died on Jan. 5 while in custody at Charleston County's jail, arrested the previous night  after authorities said he got into a fight at the North Charleston mental health facility where he was being treated.

His family disputes he was involved in a fight at Palmetto Lowcountry Behavioral Health, saying he never showed a propensity for violence or for resisting authority. They continue to question why he was arrested and why deputies used so much force against him. They wonder why no one intervened to stop the fatal encounter.

Investigators and medical examiners have probed the 31-year-old's history of mental illness. The Charleston County sheriff released videos showing the actions of jail deputies, who have since been fired. There's been a legal settlement with county agencies and the city of North Charleston; and the 9th Circuit Solicitor is trying to decide whether to charge the two deputies involved in his death.

The Sutherlands' search for answers and justice is far from over.

Above all else, they want the world to see Jamal as they knew him.

The boys were inseparable.

They moved to Goose Creek from Norfolk, Va., in the summer of 1989 after James Sr., the boys' father, was transferred to the Lowcountry while serving in the Navy. Their mother, Amy, had retired from the Army and spent her time raising the growing family.

By the time he was 4, his parents enrolled him in Little League, where the energetic boy jumped around more than he played baseball.

He and his brother also played soccer. They stayed out until dusk riding bikes. They were best friends.

"We were military, so between my dad going around on Naval bases, we didn't have a lot of friends early on," James Jr. said. "We hung out a lot as kids. … My mom dressed us similar. I started making friends and he'd come hang out. We pretty much did everything together."

Jamal's sweet nature shone even brighter when his younger brother, Jamar, was born.

"The day I went to have Jamal's brother … he said, 'That's my baby,'" Amy said. "Jamal was super, super protective. When he got to be older, Jamal thought he was his brother's dad."

But the boys wanted for nothing, their parents said.

Jamal, in particular, was spoiled, his mother said. He loved playing Nintendo and collecting Teenage Mutant Ninja Turtles toys. The family took trips to Six Flags Over Georgia and to the boys' paternal grandparents' home in Kentucky.

By the time Jamal was 7, he'd grown to be as big as his older brother. Everyone thought they were twins.

The boys were smart, with Jamal in particular showing an aptitude for math and reading. He loved phonics and challenged his parents to see who could speak more properly.

The family attended Canaan Missionary Baptist Church in North Charleston, where Jamal sang in the choir, was on the usher board and went to Sunday School.

At school, he enrolled in classes for gifted students, his parents said.

The first signs came when he was 13.

Jamal told his mother he was having visions and hearing voices, but they had difficulty getting him treatment at first.

"Because he was in the gifted class, they told me nothing was wrong with him even though he kept saying, 'I'm seeing and hearing things,'" Amy said. "They go, 'Oh, they don't do it that young,' but he was."

By the time Jamal turned 16, his mother took him to see a counselor through James Sr.'s job.

The sessions helped him feel better, but he was not put on medication right away, she said.

The following year, she took Jamal for treatment and doctors put him on lithium, a commonly prescribed mood-stabilizing medication.

"That was the end of his life," his mother said. "He was never, ever the same."

The lithium caused his hands to claw up. His eyes twitched. He felt ashamed to be in public, said his younger brother, Jamar.

As he grew older, people would ask his mother why Jamal didn't work.

Amy Sutherland would reply that her son was doing the Lord's work.

"He was more spiritual than 90 percent of people, but they didn't understand," she said. "Nobody knew he was sick, so they thought he just didn't work."

Jamal's intelligence shone when he was well, but when symptoms of his bipolar disorder and schizophrenia surfaced, they took a major toll, his family said.

"Jamal didn't need a lot of anything," his mother said. "He just needed somebody to tell his life to. He told his brothers, but there were some things he just wanted to see a professional for."

By the time he was a teenager, Jamal found a creative outlet in music.

He produced beats and composed rap.

Once, while on a cruise with the family, his mother heard someone playing a piano aboard the ship. It was some of the most elegant music she'd ever heard.

"I was like, who can do that," Amy said. "I look over and, oh my God, it was Jamal. Nobody ever taught him. He just sat down and started playing."

Over the years, Jamal would incorporate images of angels onto album artwork. He wrote more than one song about his death, his younger brother Jamar said.

About two months before his death, the family started seeing ravens around the house.

Jamal told his mother he saw the birds as a sign of his impending death. She said she told him he wasn't going to die, but the birds kept coming and Jamal insisted that his mother watch as they flocked.

The ravens clustered outside his bedroom.

For the family, Jamal's visions were not simply symptoms of his condition.

They got him excellent medical treatment and he was never without care from certified professionals. But they also believe he had a deep connection with God and believe part of his story can't be explained by science alone.

A search for justice

The Sutherlands have no doubt about that spiritual connection.

After his death, neighbors, friends, church members and others told them stories about how Jamal helped with issues they were having, about how he gave them the exact advice they needed.

"It's hard for an angel to fit in on Earth," his brother Jamar said. "It's the same thing with him."

The family hopes Jamal's story can help other families to be more open about mental illness, a subject that remains taboo across many cultures, and will spark leaders to take decisive action to ensure nothing like Jamal's death happens again.

If Jamal were still alive, his mother knows he'd be telling the community to change their hearts if they want to see change in the world.

"There's so many people that don't want to change, but they wanna see change," Amy said. "We need to get back out on the streets and start to talk about our community."

In the weeks before he died, he was trying to figure out his place in the world, James Jr. said.

Jamal flew to San Antonio, Texas, and stayed for two weeks. His older brother was stationed there with the Air Force at the time.

"At the time, he was trying to figure out whether he wanted to move (here)," his older brother said. "We just talked about life and what was going on, what he had going on and where he wanted to go."

Like his parents and youngest brother, James Sutherland Jr. hopes people realize people with mental illnesses are anything but helpless.

His brother lived a full life, he said.

"My brother was my brother," James Jr. said. "I'd talk to him literally every day. I was taking his advice until the last days. I talked to him the day before he died."

He said he hopes those responsible for his brother's death are charged and get their day in court. He prays no other family has to suffer what his has.

In the weeks since authorities released body camera video showing deputies use pepper spray and Tasers on her son, Amy Sutherland said she's watched the footage four times, searching for answers no one has been able to provide.

She's shut her eyes and concentrated on what police and deputies said about her son.

She's zeroed in on the moments deputies grappled with him after deploying the pepper spray and Tasers.

Every viewing seems to lead to more questions, like when Jamar, her youngest son, spotted bandages on Jamal's legs as deputies moved in on his cell.

She wonders how he received those injuries. She knows her search for accountability isn't over.

Amid the questions and the grief, amid the loss of the son who clung closest to her side, Amy Sutherland takes comfort in one fact — her son's final moments were spent calling out to his Lord.

"Hallelujah," he could be heard in deputies' body camera video. "Hallelujah."