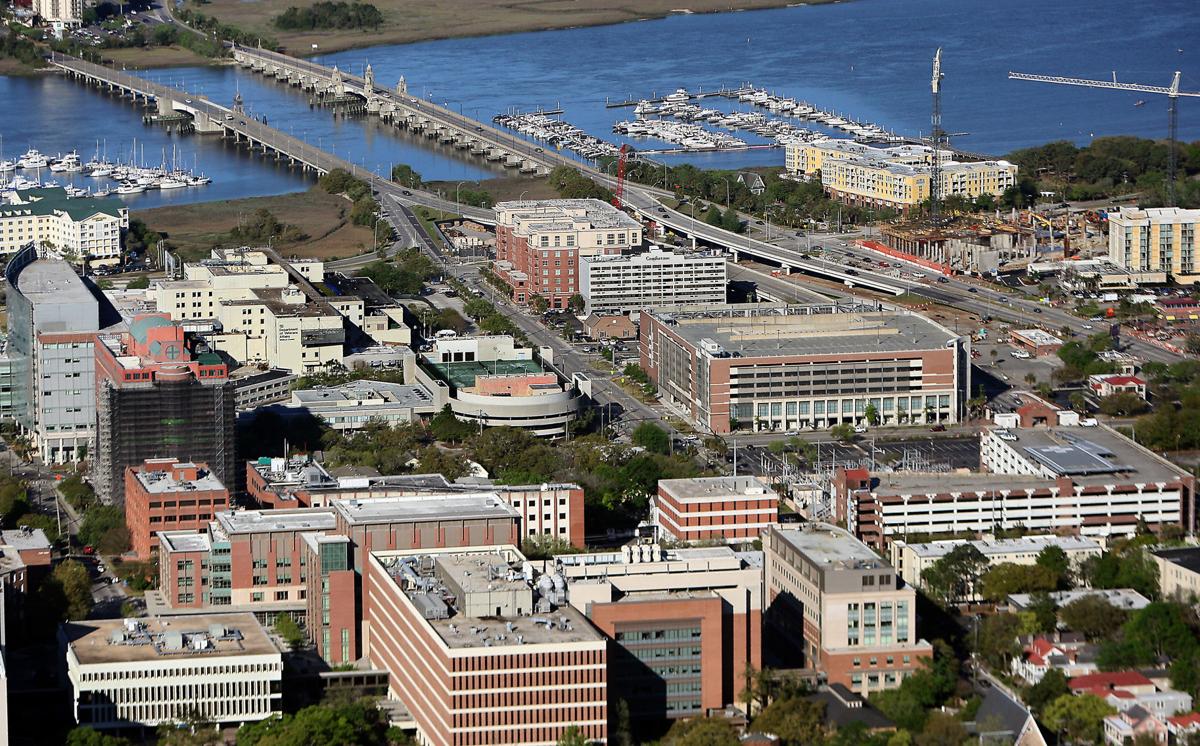 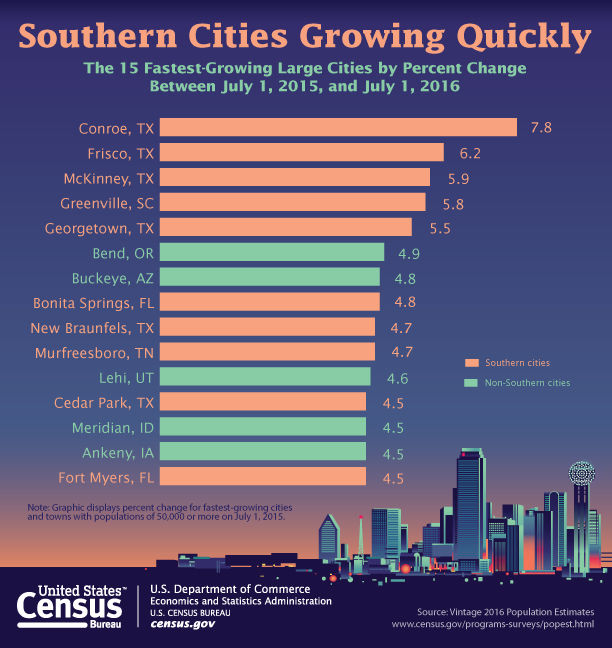 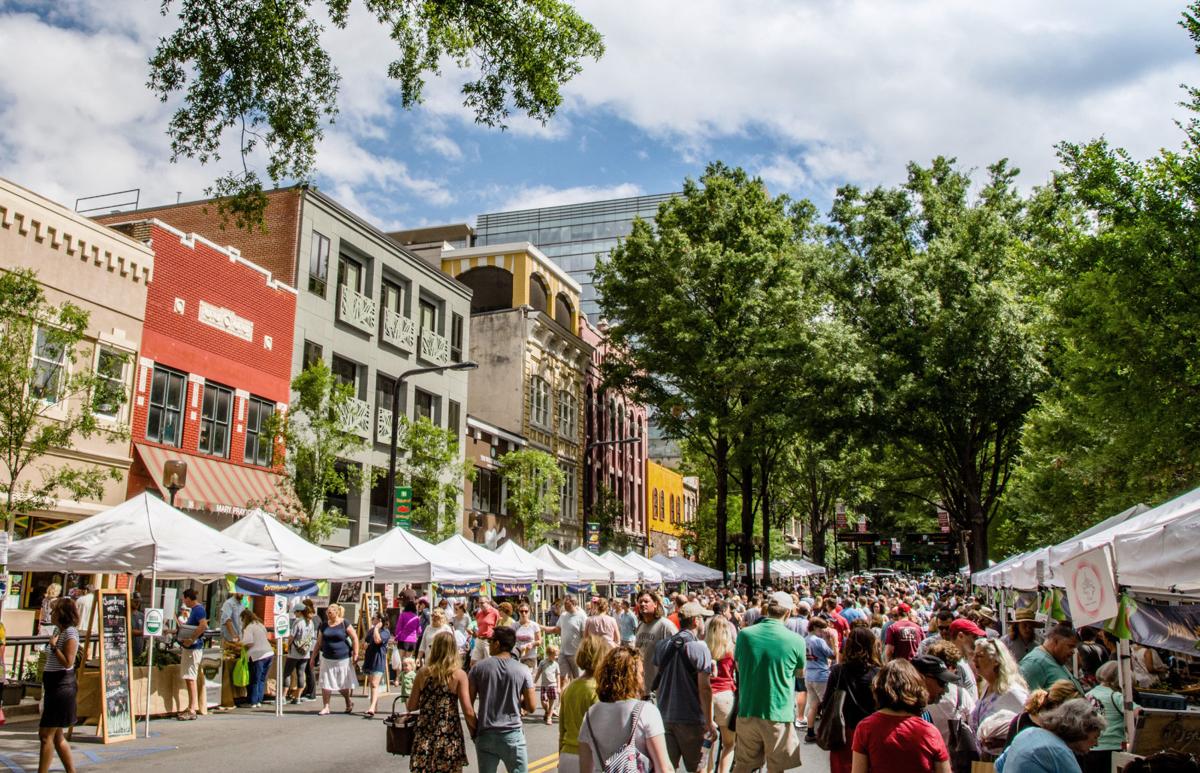 Visitors fill the street for Greenville's recurring TD Saturday Market. The Upstate city is ranked as the fourth-fastest in growth nationally. Provided

Visitors fill the street for Greenville's recurring TD Saturday Market. The Upstate city is ranked as the fourth-fastest in growth nationally. Provided

Charleston's recapturing of the title was anticipated because the city has been adding far more residents than Columbia every year. Charleston's estimated population for mid-2016 was 134,385, which was 76 more than Columbia's.

"I don’t look at it as bragging rights at all," Charleston Mayor John Tecklenburg said. "The challenge is not to be the biggest city but the best city, and I believe we are."

"Everybody in the region now comes to downtown Greenville for everything," said Mayor Knox White, who learned of the city's national ranking from The Post and Courier. "The entire downtown on a Sunday afternoon, it looks like a festival is going."

Like the Charleston peninsula, Greenville has become a city where construction cranes dot the skyline, visitors fill the main streets and parks, and new hotels and apartment buildings have been rising fast.

A year ago Mount Pleasant was the fastest-growing municipality east of the Mississippi and ninth fastest-growing in the nation. But the East Cooper town didn't scratch the nation's top-growth list this time. One-year growth rates can vary considerably.

"We’re having a similar conversation (about growth concerns), but not like you’re having in Mount Pleasant or Charleston," said White. "We’ve always talked, in Greenville, about how to balance growth with quality of life."

Mount Pleasant has twice put moratoriums on apartment projects due to growth and traffic concerns, and Charleston recently approved an apartment moratorium on James Island. Those would not have impacted growth rates covered by the Census estimates because those cover the 12 months through July 2016.

"I think it is a big deal that Charleston is the largest city," said Mary Graham, chief advancement officer at the Charleston Metro Chamber of Commerce. "It’s certainly a bragging point — one of many for the area.

"I think that has a lot to do with what’s going on in the region," she said. "There’s been a lot of job growth, and we were the top tourist destination for several years."

Coastal metropolitan areas have led South Carolina's growth, but Greenville's ranking as one of the fastest-growing cities in the U.S. with at least 50,000 residents reinforces the fact that metropolitan areas in general have been thriving.

The Palmetto State's largest cities and towns, with the exception of Columbia, have far outpaced the statewide population gains seen since 2010. Half of the state's 270 towns and cities have fewer than 1,500 residents, and most of those have populations the same or smaller than in 2010.

In Columbia, city leaders have decided to get more aggressive about annexation. That's when a city expands its borders to cover a larger area, typically with the permission of current residents.

Without annexation, the city of Charleston's population would have peaked in 1950, when about 70,000 people lived on the peninsula, which at the time was the entire incorporated city. The peninsula has fewer residents now, but Charleston's city limits currently extend across West Ashley and from the western edge of Johns Island to the Francis Marion National Forest in Berkeley County above Daniel Island.

Columbia created an "annexation coordinator" position last year, and Andrew Livengood has the job. He said the city is focusing on the largely unincorporated area between Interstates 26 and 77, below Interstate 20.

However, some of the largest approved developments in the tri-county Charleston area, including Cainhoy Plantation and Long Savannah, sit within the Charleston city limits. Those two developments alone could become home to tens of thousands of Charlestonians, so population-wise, Columbia appears likely destined to remain number two.

"We’re always number one, in our hearts," Livengood said.

Oh no, not again: Charleston tops yet another list, in this case, South Carolina's largest cities

Cities with at least 50,000 residents that experienced the nation's most rapid population increases in 2016, according to the Census Bureau:

Population growth estimates are for the 12 months ending July 1, 2016.