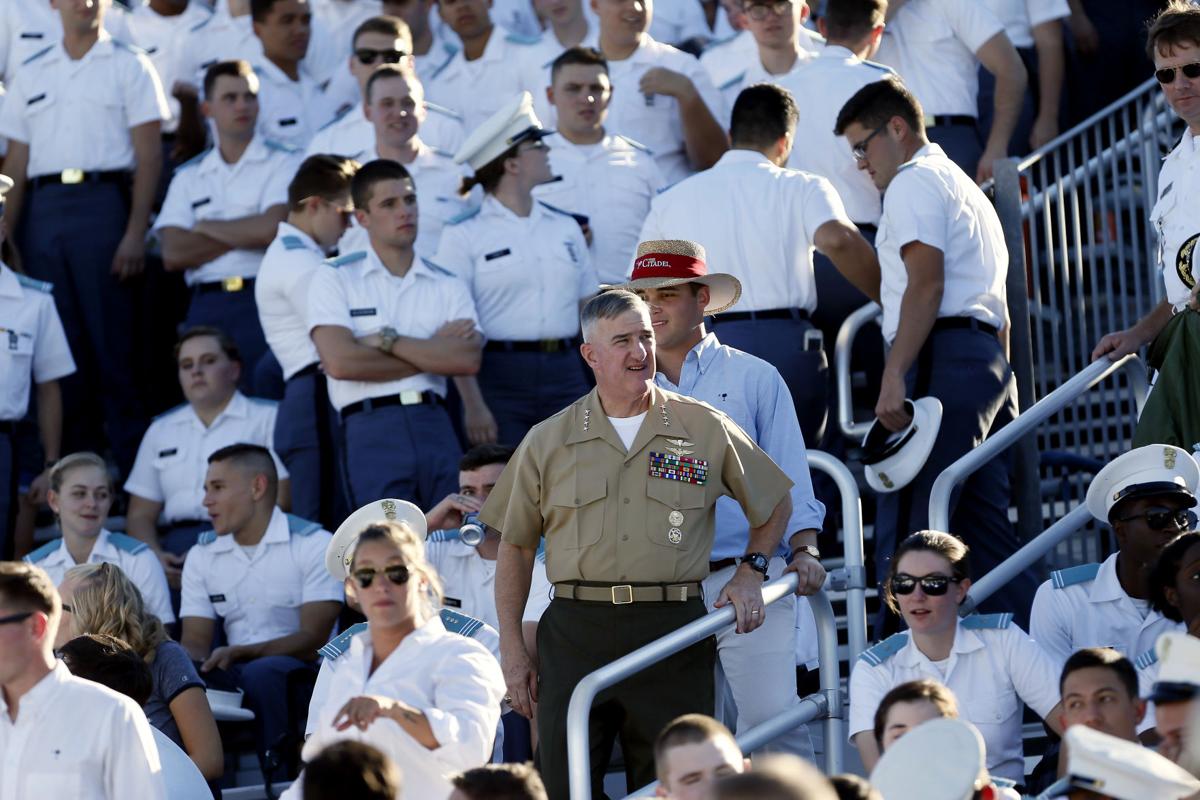 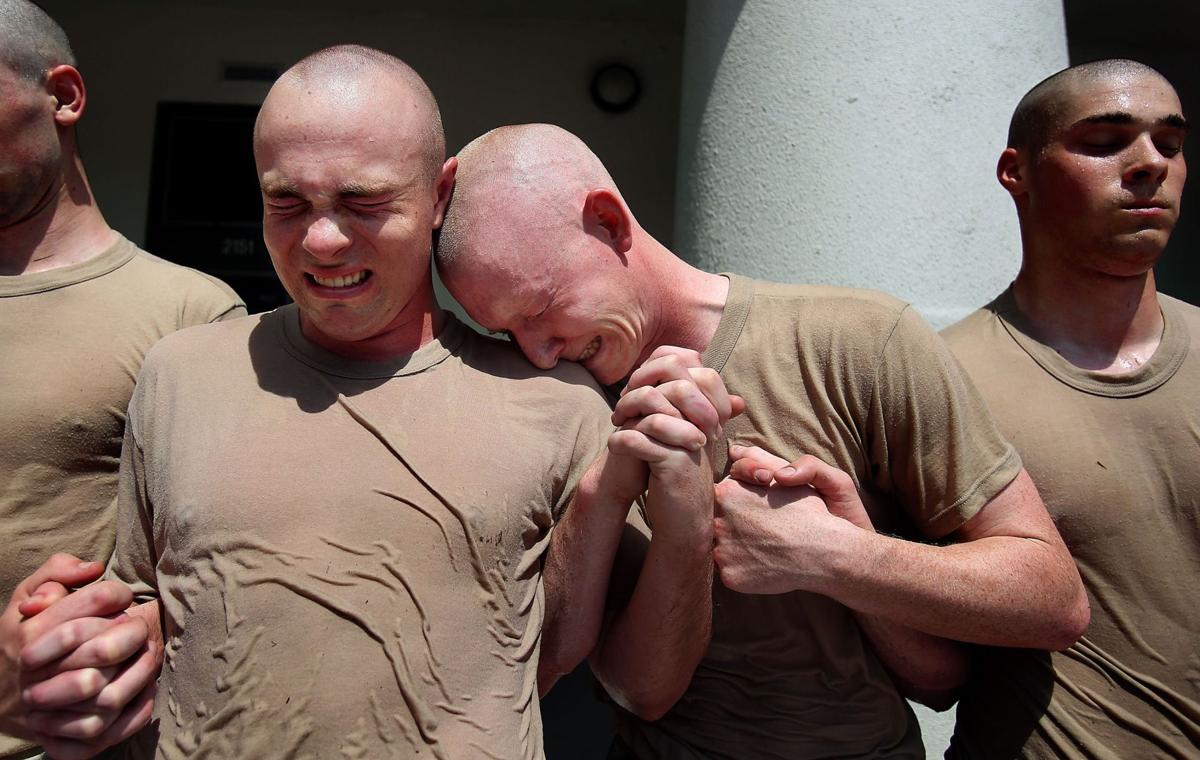 Male freshman cadets have traditionally been required to keep the signature "knob" shaved scalp throughout their first year, but now the college will allow the cadets to shave their hair once and then let it grow back. In this file photo, exhausted knobs Sam Bonner of Mount Pleasant (left), Jake Barker of Edisto Island (center) and Adam DeGenova of New Orleans brace together with Golf Company moments before their intense Recognition Day morning ended April 12, 2014, at The Citadel.  File/Grace Beahm/Staff

Change doesn't always come easily at The Citadel, but a newly installed president has announced a policy he hopes will curb hazing and improve leadership training at the public military college.

Retired Gen. Glenn Walters announced this month that starting in the 2020-21 school year The Citadel will assign all rising sophomores to a different company than the one they were in freshman year.

"This 'cross-pollination' between companies keeps cadets focused on the traditions of the college and prevents dysfunctional norms from taking root at company level," Walters wrote in a Feb. 7 letter to cadets and alumni. "Cadets will benefit from the fresh start serving a different company’s chain of command."

Under The Citadel's longstanding system of discipline, most cadets have spent all four years living in barracks and training with a close-knit group of about 100 classmates known as a cadet company.

The sophomore shuffle will help the college balance the number of cadets in each company, as freshman attrition rates tend to vary from one company to the other. According to Walters' letter, evening out the company sizes will give every student an equal opportunity to advance in the ranks of the Corps of Cadets.

Walters, a 1979 Citadel graduate and former second in command of the U.S. Marine Corps, became his alma mater's 20th president last fall. In a December Post and Courier interview, Walters said he had no intention of scrapping the college's "fourth-class" discipline system, which requires freshman cadets to obey the lawful orders of any upperclassman.

But Walters also indicated he wasn't afraid to part with tradition. In November 2018, when Commandant Capt. Geno Paluso announced a change in the college's haircut policy that rubbed some alumni the wrong way, Walters said in a press release he supported the decision "wholeheartedly."

Traditionally, male freshman cadets have been given stark bald razor haircuts upon entering the college and have been required to maintain the haircut throughout their first year. The freshman nickname "knob" came from the cadets' distinctive dome-top look.

Now, male freshmen still get clean-shorn on their first day, but in keeping with Department of Defense standards, they may grow their hair back out to the same length as upperclassmen. Female cadets, who were previously required to keep a short-cropped "pixie" haircut, will no longer have to get a haircut when they start at the college.

Retired Lt. Col. Kevin Dopf, a former assistant commandant who left The Citadel in 2015, wrote a blistering doctoral dissertation in 2014 that called for sweeping changes in the fourth-class system. He pointed to a long history of abuse, hazing and racist incidents, as well as a series of leaders in The Citadel's own ranks who had tried and failed to overhaul the adversarial discipline model that he said bred such problems.

Dopf said in a phone interview Thursday he was excited to see changes taking place under Walters' leadership. The shuffling of companies, he said, could help root out longstanding patterns of abuse.

Even the change in haircut policy is a step in the right direction, Dopf said. When cadets were required to keep the close shave all year, he said upperclassmen would sometimes order the knobs to return to the barbershop day after day, for no apparent reason, in an arbitrary exercise of power.

"We’re here to learn good leadership, not just to harass somebody to get haircuts and look weird by normal standards," Dopf said.

But some cadets and alumni aren't as enthused by the changes. Missy Franklin, a Newberry resident whose son is a sophomore at The Citadel, said cadets, parents and alumni had just stopped talking about the haircut policy when the announcement about cadet companies came down. While current cadets are grandfathered in and won't be affected by the sophomore shuffle, she said many were upset by the change in tradition.

"I just know that once you start with your group, those are your brothers, those are the people you want to finish with," Franklin said. "As a parent, I feel the same way. I’ve gotten to know the majority of those knob cadets. You build a bond with those people and their parents."

In one concession to tradition, "legacy" cadets whose parents attended The Citadel will still be allowed to request a specific company assignment, according to Walters' letter. Those cadets will have the option of picking a company to be assigned in either their freshman or sophomore year.