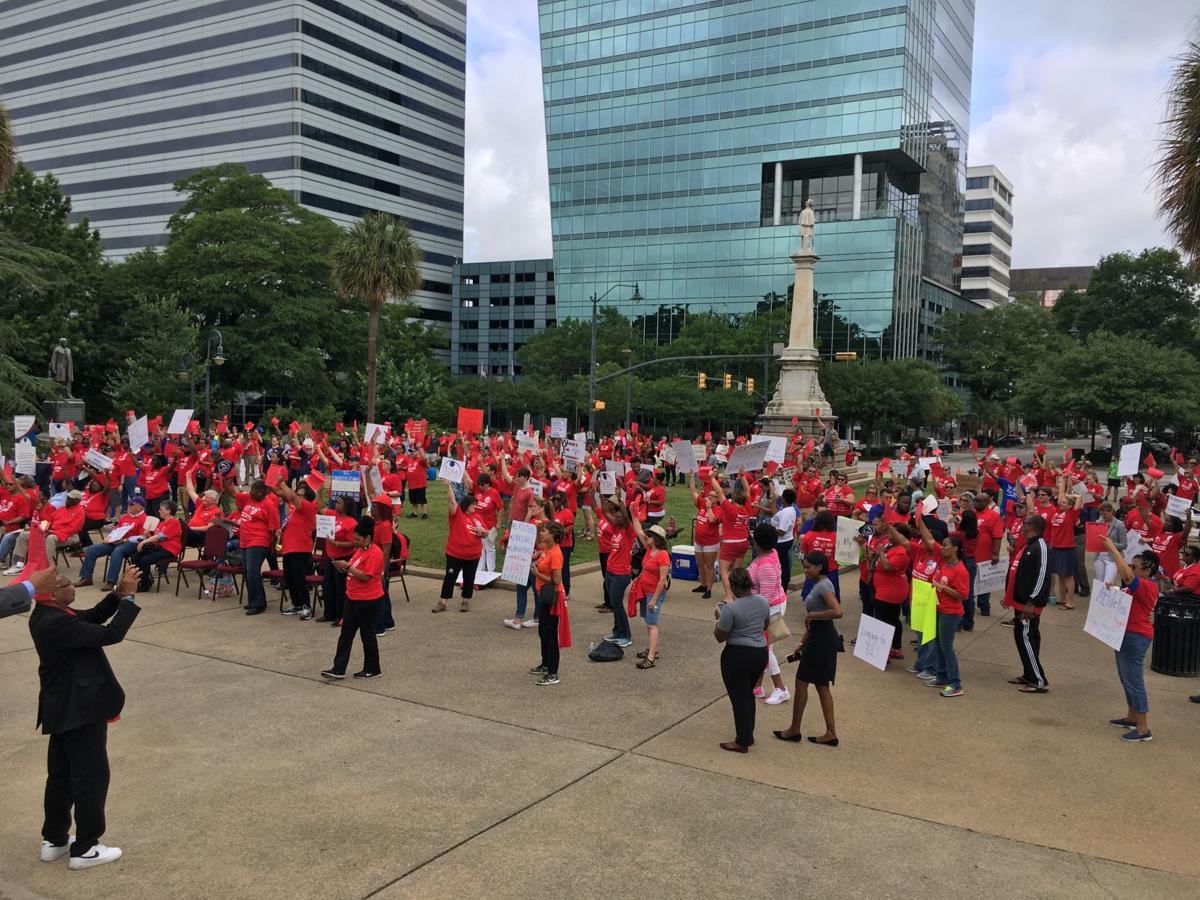 South Carolina teachers and state employees hold up copies of letters to GOP leaders demanding better pay during a rally at the Statehouse in May 2018. File/Seanna Adcox/Staff 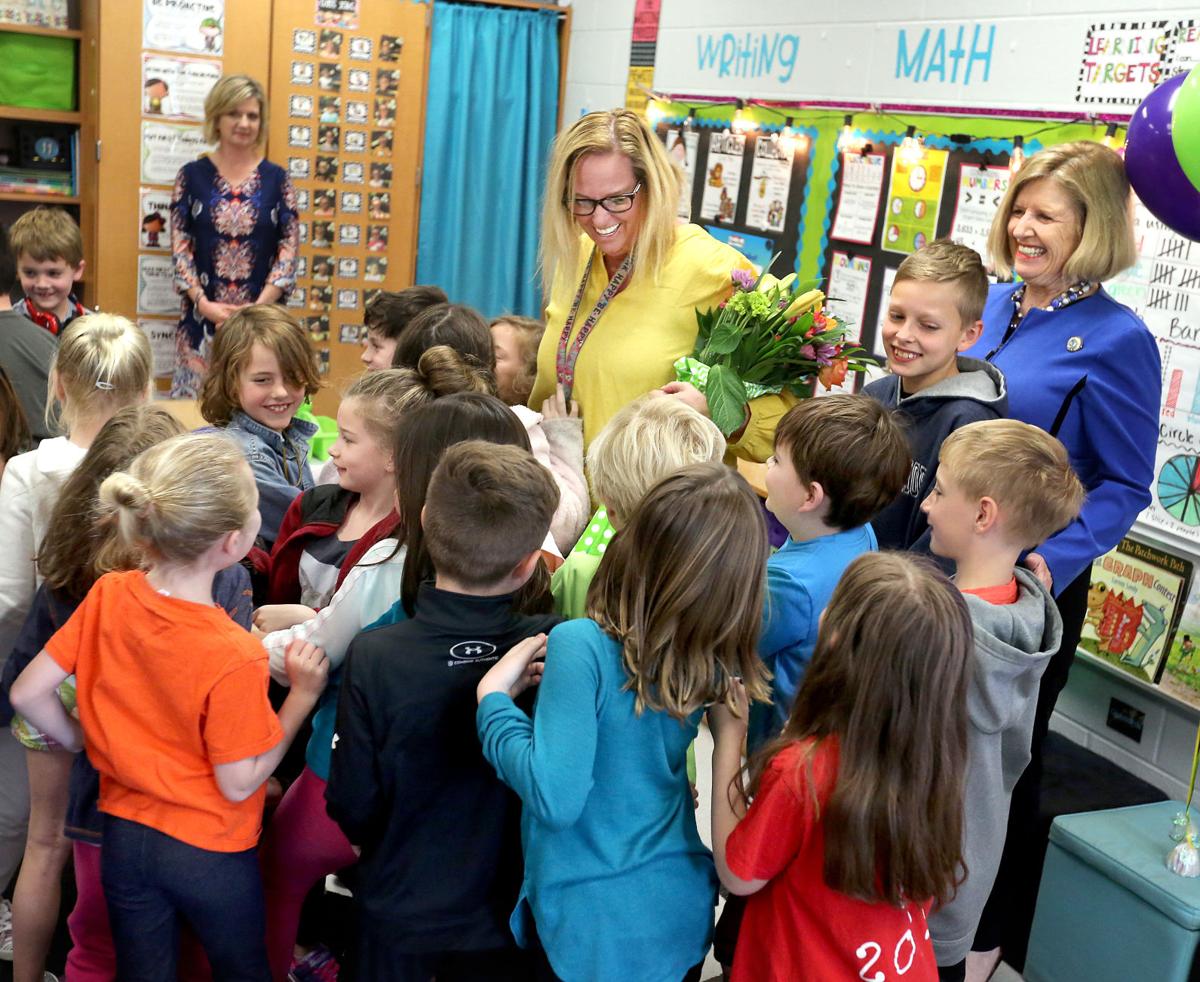 Whitesides Elementary School second-grade teacher Stephanie Haecherl receives hugs from her students after being surprised by State Superintendent of Education Molly Spearman (right) Thursday, March 14, 2019, as one of five finalist for South Carolina Teacher of the Year. Haecherl will travel to Columbia to protest for improved teacher working conditions Wednesday. Spearman has publicly opposed the protest. File/Brad Nettles/Staff

Defying the wishes of the state education superintendent, top Republican politicians and some of their own school board members, thousands of educators have planned one of the largest teacher protests in South Carolina history Wednesday in the state capital.

Teachers who have never participated in public protests have grown increasingly bold, frustrated by stagnant wages and a fractious debate over a 2019 education overhaul bill that stalled out in the Senate last week.

"As a representative of teachers, my district and state, I feel strongly that teachers should be advocating for educational reform," said Stephanie Haecherl, a teacher at Whitesides Elementary and current finalist for state teacher of the year.

"While it appears teachers have been provided with more opportunities to share educational concerns, the outcomes of the most recent bills do not reflect that those making educational decisions are truly listening," she added.

This year's protest action was organized by the teacher activist group SC for Ed under the title "#AllOutMay1: A Day of Reflection." Amid a state political climate that has long stymied labor organizing, the teachers have maintained that all participants will be taking a legally allowed personal leave day, as opposed to simply walking out or striking.

Top-level elected officials are not pleased, and have continued to characterize the protest as a walkout. South Carolina's Republican governor, Republican Senate majority leader and Republican education superintendent have all come out against it.

"I cannot support teachers walking out on their obligations to South Carolina students, families, and the thousands of hardworking bus drivers, cafeteria workers, counselors, aides, and custodial staff whose livelihoods depend on our schools being operational," Superintendent Molly Spearman said in a statement Monday.

A spokesman for Spearman said she will be filling in as a substitute teacher at a Midlands area school. The spokesman declined to say which school.

Former state Superintendent Jim Rex said Spearman’s statement uses “poor wording.” Were he superintendent today, he said, he would have at least remained neutral and said nothing at all.

Considering the decades of unmet obligations from state officials, teachers should not be lectured about meeting their obligations, he said.

“We’ve tried the Supreme Court. We waited for decades and watched how it amounted to nothing even though we knew for generations we weren’t doing what needed to be done, so it’s not surprising to me teachers are making this step. It’s only surprising they haven’t done it earlier,” said Rex, the last Democrat to hold statewide office in South Carolina, which he did from 2007-11.

A Post and Courier analysis of historic teacher salary data provided by the S.C. Department of Education dating back to 1986 indicates the decline of teacher pay is a long-term problem. The state periodically raises the minimum salary for all full-time teachers. But the figure has not kept up with inflation since 2003, the year Republicans consolidated a trifecta of power by winning the governor's office and majorities in the Senate and House.

The current state budget proposal would bump the minimum up to $35,000, nearly catching up with inflation as calculated by the Bureau of Labor Statistics.

As in many politically conservative states, South Carolina's government has pummeled labor unions through legislation and court decisions since the mid-20th century.

Public employees are barred from collective bargaining, which means they may not negotiate as a group for higher wages or better benefits.

County-level education associations, which led a number of picket lines and teacher strikes in the 1970s and '80s, have declined in power since a 1979 attorney general's opinion prompted school districts to halt voluntary deductions of teachers' membership dues from their paychecks.

Still, teachers have a long history of political activism to draw on, according to Jon Hale, an associate professor at the University of South Carolina whose research focuses on student and teacher activism.

Septima P. Clark, a black Charleston teacher who was active in the civil rights movement, was known to Martin Luther King Jr. as the "Mother of the Movement" after she fought for an integrated and equally paid teacher workforce.

"The numbers on Wednesday are unprecedented, but the actions aren’t," Hale said. In the late 1970s, with public-sector unions on the rise, Hale said it was not uncommon to see as many as 300 teachers protesting for higher pay and other issues around the state.

South Carolina's public school teachers have won some protections over the years. They are among the only sectors of employees in the state whose bosses must fire them "for cause," providing them an opportunity to protest their firing in a hearing. Most workers in South Carolina are hired "at will," meaning their bosses may fire them without providing a reason.

One area of the law remains "ambiguous" regarding teachers, according to Hale: the right to strike.

South Carolina was one of only three states that never passed a law specifically banning or allowing teacher strikes (along with Utah and Wyoming), according to both an October 2012 policy analysis by the conservative-leaning Thomas B. Fordham Institute and a March 2014 policy analysis by the liberal-leaning Center for Economic and Policy Research.

"The status is ambiguous, but I always look in these cases to the culture, and teachers have continually reported feeling threatened even for speaking out at school board meetings," Hale said.

"The sleeping giant is waking up." Forty years after teachers threatened to strike for better working conditions, a new wave of teacher activists is preparing to march on the Statehouse Wednesday.

The formation of the teacher-led SC for Ed group in 2018 could be a major development, Hale said. While the group planned its rally for May 1, a date dubbed "Red for Ed" and promoted by the NEA in other states, including North Carolina, SC for Ed has sought to distance itself from SCEA. In turn, SCEA has denied that it organized the protest, as has the PSTA.

"Obviously, the teachers felt that the current structures weren’t working for them," Hale said.

SC for Ed organizers have said that they expect more than 4,000 participants at the Statehouse protest, although that figure includes both teachers and supporters.

Seanna Adcox contribute to this report.