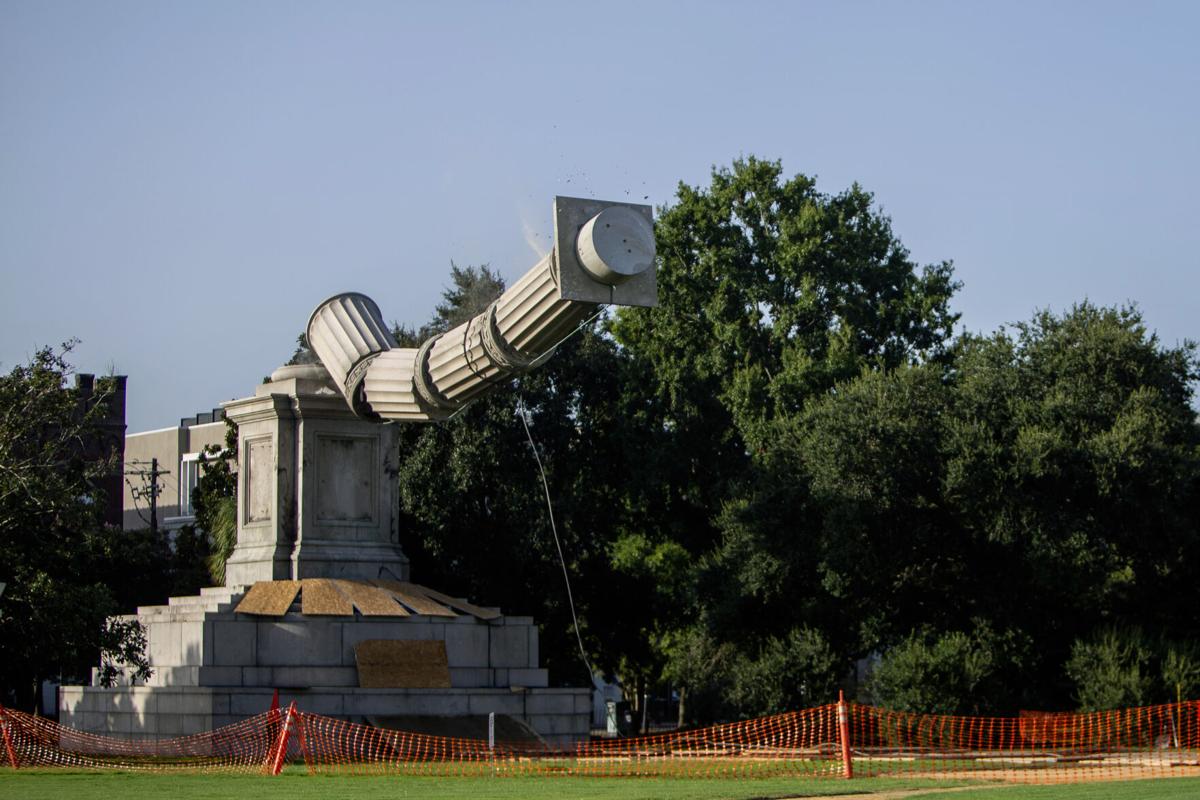 Workers pull down the pedestal of the John C. Calhoun monument at Marion Square Wednesday morning, Aug. 26, 2020, in Charleston. The city removed the statue in June, after City Council voted unanimously for its relocation. Gavin McIntyre/Staff 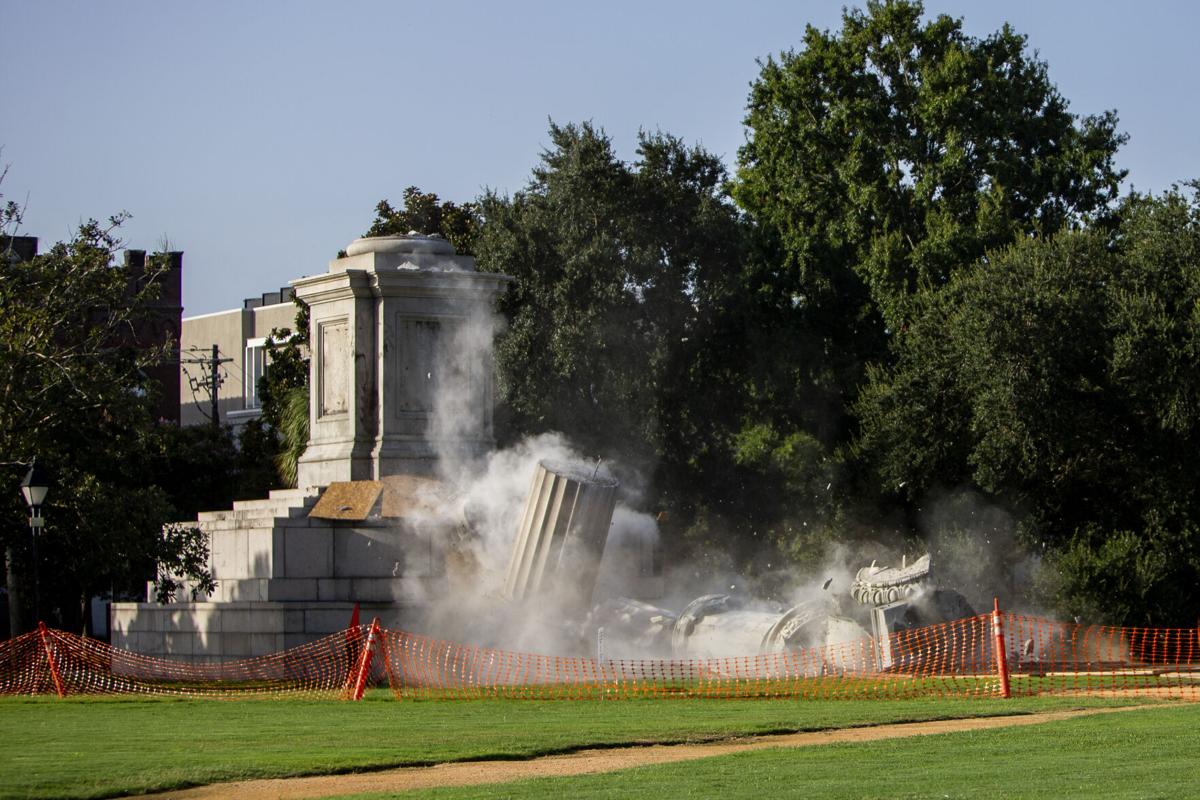 A crew pulls down the pedestal of the John C. Calhoun monument at Marion Square on Wednesday morning, Aug. 26, 2020, in Charleston. Charleston removed the statue in June, after City Council voted unanimously for its relocation. Gavin McIntyre/Staff 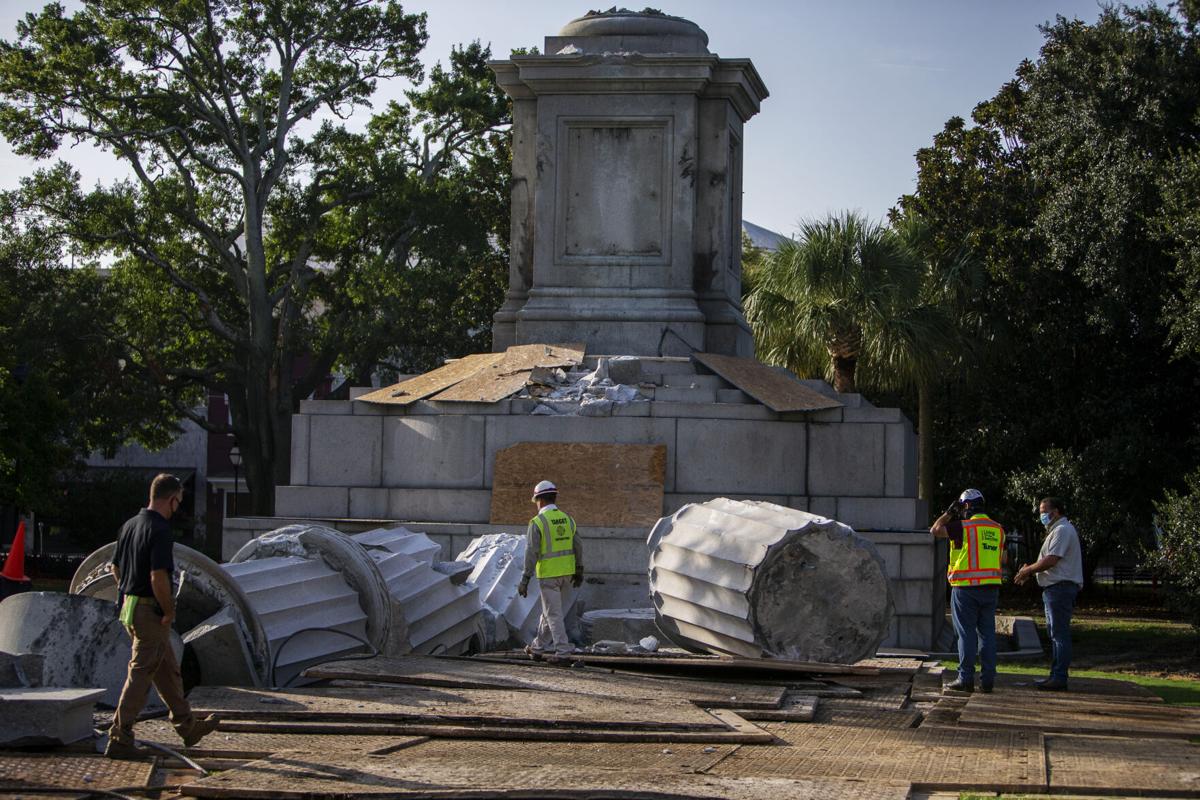 A crew of workers surveys the debris from the pedestal of the John C. Calhoun monument after it was pulled down at Marion Square Wednesday morning August 26, 2020, in Charleston. The City of Charleston removed the statue in June, after they voted unanimously for its relocation. Gavin McIntyre/ Staff 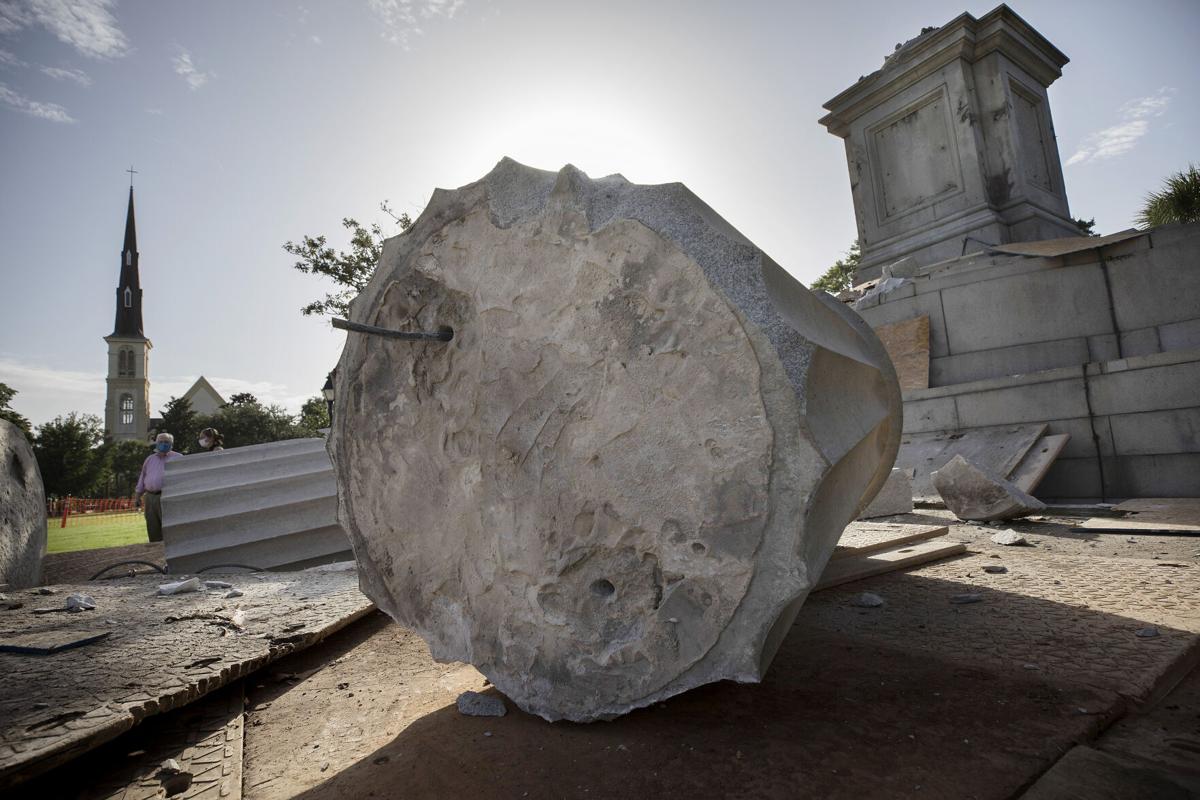 Remnants of the pedestal from the John C. Calhoun monument after it was pulled down at Marion Square on Wednesday, Aug. 26, 2020, in Charleston. File/Grace Beahm Alford/Staff 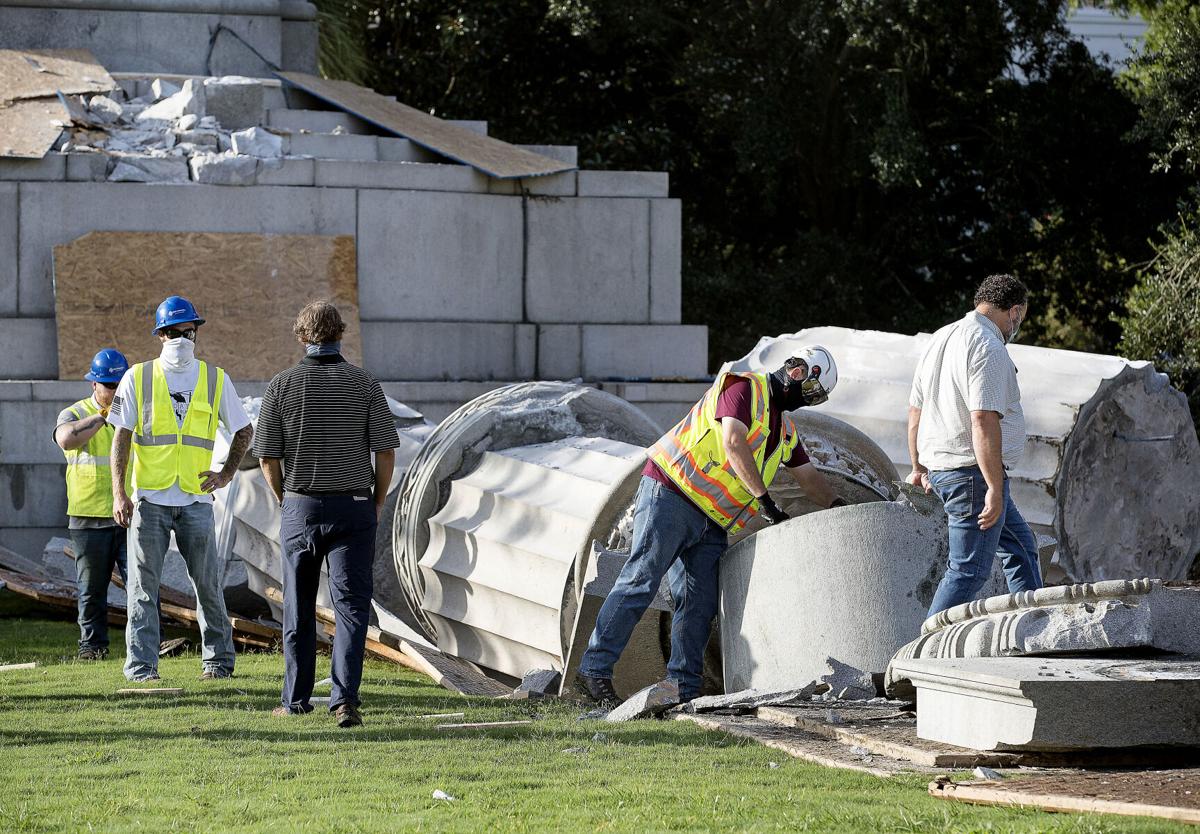 Remnants of the pedestal from the John C. Calhoun monument after it was pulled down at Marion Square on Wednesday, Aug. 26, 2020, in Charleston. Grace Beahm Alford/Staff

Workers pull down the pedestal of the John C. Calhoun monument at Marion Square Wednesday morning, Aug. 26, 2020, in Charleston. The city removed the statue in June, after City Council voted unanimously for its relocation. Gavin McIntyre/Staff

A crew of workers surveys the debris from the pedestal of the John C. Calhoun monument after it was pulled down at Marion Square Wednesday morning August 26, 2020, in Charleston. The City of Charleston removed the statue in June, after they voted unanimously for its relocation. Gavin McIntyre/ Staff

Remnants of the pedestal from the John C. Calhoun monument after it was pulled down at Marion Square on Wednesday, Aug. 26, 2020, in Charleston. Grace Beahm Alford/Staff

Marion Square shook Wednesday morning as a demolition crew pulled down the massive granite pillar that held a statue of John C. Calhoun over Charleston for over a century.

In 21 seconds, Target Construction backhoe operator Chris Rainey pulled down the column that was there for 124 years.

Metal plates placed in front of the statue to protect the grass and walkways did little — in some spots, the more than 100,000 pound pillar was embedded nearly a foot into the ground.

The original square-shaped base remains, though the northern side was damaged during Wednesday demo. In the coming weeks, the city will look for a team to remove it.

Kelly Rainey, Chris' wife, drove up from Adams Run with their three young children to watch as her husband pulled down the column, a tradition they've made of watching their dad work "unusual" projects, like toppling water towers.

They were the only ones to watch, aside from two city workers and a small media presence.

As the demo dust cleared, Chris walked over to his children with small pieces of granite for them in hand. While some people walked away from Marion Square on Wednesday morning with shards of granite, city officials said the contractor, Turner Construction, will be recycling it.

"That's 100 percent pure Portland cement with 18 inches of solid granite around it," Rainey said. "That's what they used in Rome."

Unlike the 17-hour removal of the 12-foot Calhoun figure that was atop the column until the afternoon of June 23, the pillar came right down at 8:22 a.m.

The Calhoun statue, which survived the destructive winds of Hurricane Hugo in 1989, was affixed to the base like a puzzle piece in a hole on the top of the column. Workers found the statue secured by a deep layer of epoxy from his right shoe.

Calhoun, a congressman and vice president who died years before Southern states launched the Confederacy, is remembered as a fierce defender of slavery and, to some, a representation of the city's dark past.

The port city of Charleston was a main thoroughfare for the slave trade. The city profited through the punishment of enslaved Black men and women for plantation owners and, later, off the legacy of slavery as a beacon of tourism.

In June, city leaders decided to take the statue down, making an announcement on the fifth anniversary of the Emanuel AME Church massacre of nine worshipers and in the wake of calls for police reform and the removal of Confederate monuments across the country.

For weeks before the announcement, the city saw protests almost daily. One protest on May 30 escalated into a riot that left many nearby King Street businesses and restaurants with a combined millions of dollars in damage.

City Parks and Capital Projects Director Jason Kronsberg said that unlike the statue, the column was only held up with gravity and mortar — it wasn’t bolstered or attached to the base in a substantial way.

Even though the pillar wasn't secured, the process of removing it spanned three days.

On Monday afternoon, crews laid down steel plates in hopes it would buffer the fall of the column. Workers returned Tuesday to continue laying plates and hoped to have the column toppled by the afternoon.

The Calhoun monument featured South Carolina’s most prominent statesman, but it was designed by J. Massey Rhind, a Scottish-American sculptor, and cast in Brooklyn.

According to a Nov. 26, 1894, story in The Evening Post citing The New York Times, Rhind won the competition for the job among four New Yorkers and two Bostonians.

“While this will be an additional honor to Charleston, it will also be an honor to New York City, in that the monument is the work of a well-known New York artist and sculptor.”

Rhind’s work, which appears in cities across the world, including the Grand Army of the Republic Memorial in Washington, D.C. and the William T. Sherman and Ulysses S. Grant monuments in Muskegon, Michigan.

A June 5, 1896, story in The Evening Post citing The New York Sun described the construction of the statue:

“It is by all odds the largest bronze ever cast (in Brooklyn). ... The Calhoun statue was cast in ten pieces, and seven months was consumed in preparing the moulds and doing the casting. The total weight of the statue is nearly 6,000 pounds, and it stands 12 feet 8 inches in height. It is to stand upon a pedestal forty feet high.”

Workers lassoed the base of the column with a 1-inch-thick tension steel cable and spent the afternoon shimmying it two-thirds of the way up.

Unlike the protesting and crowd that gathered to watch the statue's removal, the only protesting came from the thousands of dragonflies disturbed by a city landscaper mowing Marion Square Tuesday afternoon.

Few people walked through the humidity of Marion Square. Dog walkers stopped briefly to look on as the demolition crew set up, but didn't stay for more than a few moments. Bicyclists slowly pedaled through the square.

Of the minimal crowd Tecklenburg said: “Well, the drama is kind of already over since the statue is down.”

Prep work continued, even as light rain fell. With threats of nearby lightning at about 4 p.m., Kronsberg called it a day. The crew would return in the morning and finish the job.

On Wednesday morning, there wasn’t much fanfare, either. Jerue stopped by after someone texted him a video of the demolition to take an up-close look at the column, now in seven large pieces.

A couple staying at the Hotel Bennett just north of Marion Square walked to the demolition crew with coffee cups in their hands, asking if the workers meant to pull the column down. They felt the shake and came down to see what happened.

Workers are expected to clean up the granite column through the week, Kronsberg said.

The same workers who removed the Calhoun figurine, Turner Construction, oversaw Tuesday's demolition work. In June, the construction company covered license plates and the name of the company with tape.

The city signed a roughly $136,000 contract with Turner Construction for the statue's removal, estimated at $100,000, and the column, estimated at about $36,000. A private donor covered the cost to remove the statue, and the city is paying for the column's demolition.

In the next few weeks, the city will put out a request for bids to remove the final base of the statue, Kronsberg said.

It is unclear where Calhoun's next home will be. Officials say it is temporarily being stored in an undisclosed location.