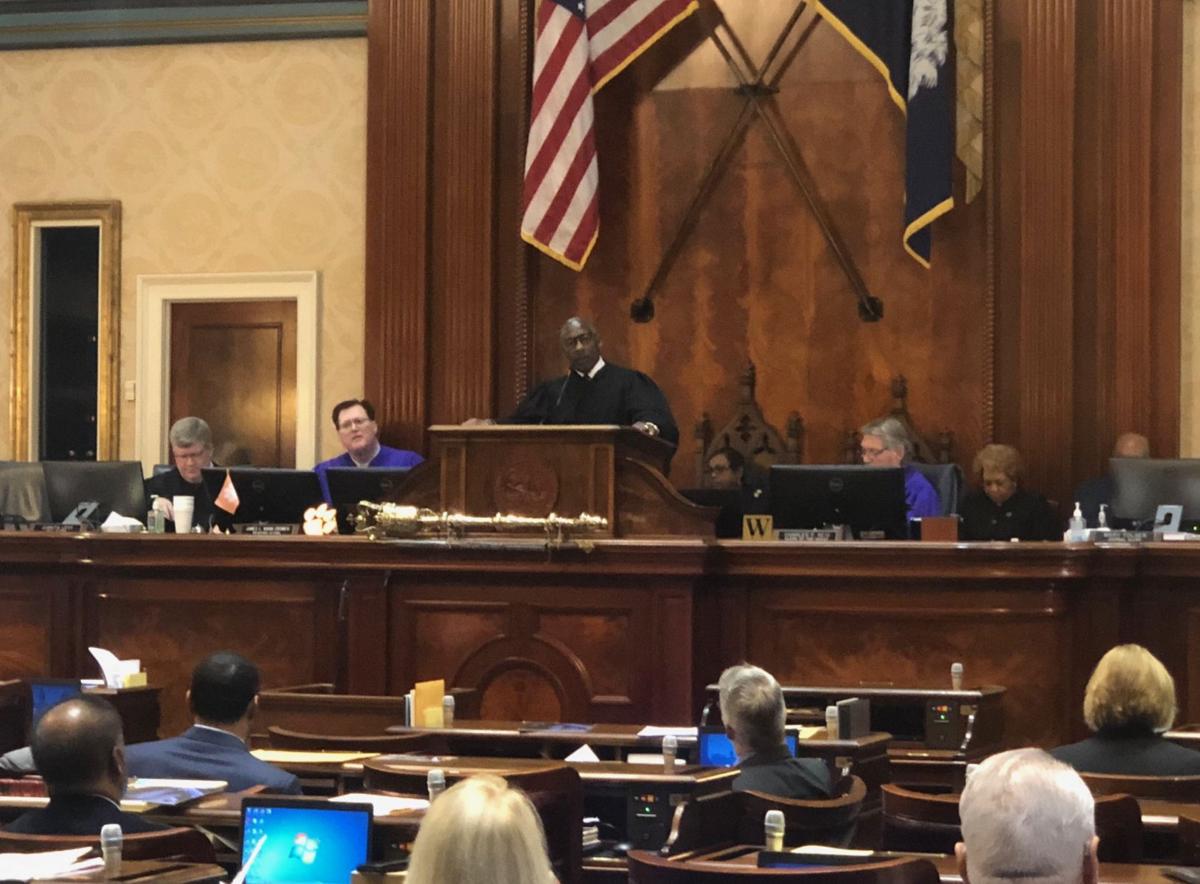 S.C. Chief Justice Don Beatty asks lawmakers for judicial pay raises during his annual State of the Judicial address in 2019. The General Assembly complied, and one result was a more than $100 million funding gap for the pension plan that covers judges and solicitors. File/Jamie Lovegrove/Staff 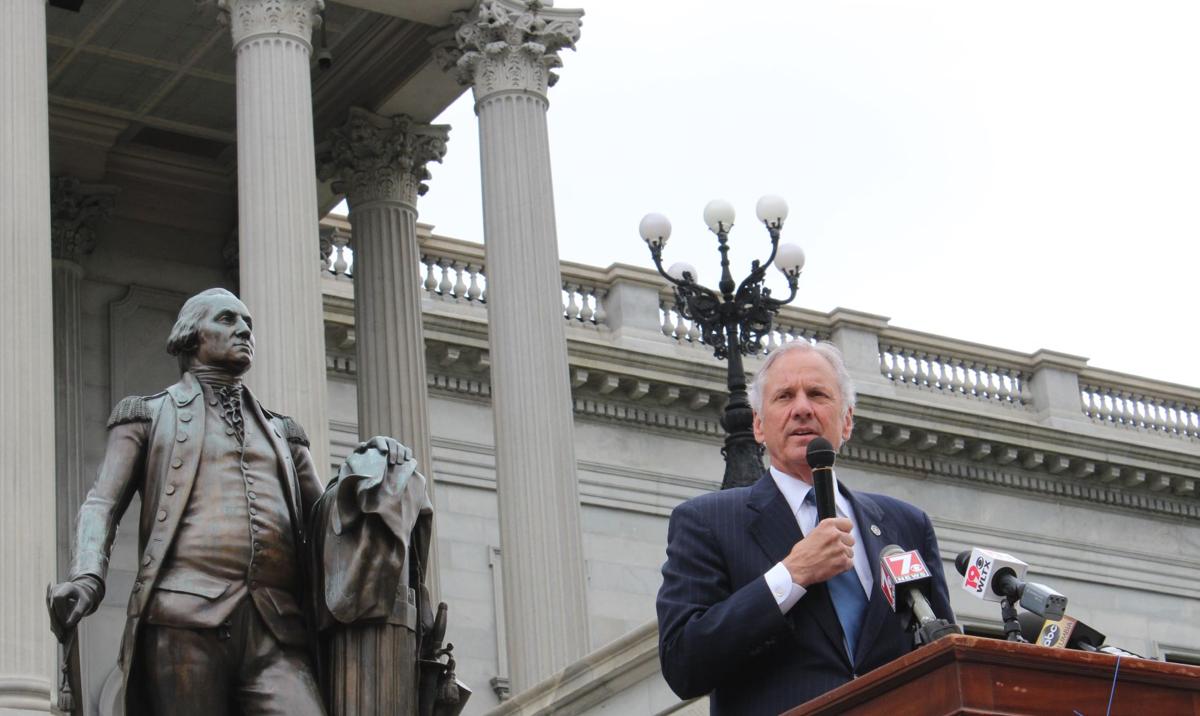 Gov. Henry McMaster signed a bill on Tuesday, April 25, 2017, meant to shore up the ailing state pension system that one in nine South Carolinians rely upon. In 2019, state lawmakers approved large pay hikes for judges and solicitors that added more than $100 million in unfunded liabilities to the pension system. File/Andrew Brown/Staff

South Carolina's retired judges and solicitors saw their annual pension payments soar by an average of more than $37,000 starting in mid-2019, while most state retirees were limited to pension increases of $500 or less.

The 35.8 percent increase in pension payments was due to an equally large pay increase for working judges and solicitors approved by the General Assembly.

Unlike the rest of South Carolina's five state pension plans, benefits in the Judges and Solicitors Retirement System are directly tied to pay raises for working members. As a result, the average retired judge now collects more than $140,000 in yearly pension payments — more than double the income most South Carolina families earn while working.

Because the pay raises hiked pension benefits, that blew a more than $100 million hole in the funding of the JSRS pension plan. Overnight, on July 1 when the pay raises took effect, the plan went from being the second-best funded of the state's five pension plans to being the worst funded.

“That is an unintended consequence. Wow," said Rep. Bill Herbkersman, R-Bluffton, who was co-chairman of the Joint Committee on Pension Systems Review.

South Carolina has been through several rounds of pension reforms aimed at shoring up the underfunded retirement plans that roughly one out of nine state residents rely upon.

Benefits have been tightened, contribution rates for employees are now among the highest in the nation and increases in annual benefits are usually smaller than those received by Social Security recipients — unless the retirees are in the JSRS plan.

Judges and solicitors were already collecting an average of $104,243 in retirement, then received the 35.8 percent increase in July that pushed average annual pensions above $140,000. Unlike most pension-eligible government workers, they can collect up to 90 percent the current salary for the position from which they retired.

That doesn't mean South Carolina has the money in hand to pay those long-term benefits. The JSRS plan, following the pay and pension hike, had less than 42 cents for ever dollar of pension liability, according to the plan's annual report.

One immediate impact was that the amount of money the state must contribute to the plan has soared. For every $100,000 paid to a judge or solicitor, the state was also contributing $52,490 to the pension fund, but that jumped to $62,940 on July 1.

The S.C. Public Employee Benefit Authority, which oversees pension benefits, expressed no alarm about the financial impact on the JSRS fund, and said the raises were approved to attract and retain judges and other JSRS members.

A PEBA statement attributed to Executive Director Peggy Boykin said: "Any additional questions about the intent of the salary increases should be directed to the General Assembly or Chief Justice."

It's not clear the majority of state lawmakers knew what they were doing — that the pay increase advocated by Supreme Court Chief Justice Donald W. Beatty in 2019 would trigger huge pension benefit increases as well and a more than $100 million liability for that pension fund.

Beatty did not respond to repeated phone messages seeking comment. Neither did Rep. Murrell Smith, the House Ways and Means Committee chairman, who supported the pay hike last year.

Last year, Beatty, whose salary was $156,200 at the time, said that unless judges were paid more it would be hard to recruit qualified lawyers to apply.

“We’ve had some outstanding judicial candidates over the years, but I have also observed that they are younger and younger, and the more experienced seasoned lawyers are becoming less available or have less interest,” Smith, R-Sumter, said in 2019. “We have to do something to improve the pool of applicants.”

South Carolina schools, prisons and social services agencies have also struggled to attract and retain workers due to low pay, but the General Assembly has not been as keen on giving them large increases.

“My pleas have fallen on deaf ears," said Rep. Gilda Cobb-Hunter, D-Orangeburg. “They felt it was more important to do that for judges and solicitors than for front-line state employees."

There are far more teachers and prison guards than there are judges and solicitors, so small pay increases for them can turn into large budget numbers, but raises for those front-line workers don't come with costly increases in pensions.

Only the pension plans for judges and solicitors — and for state lawmakers — had the feature linking pay raises to pension benefit increases, and the lawmakers plan closed to new participants in 2012.

Herbkersman said lawmakers needs to take another look at that provision in the JSRS plan.

“We can keep contributing, but we can’t keep digging a hole," he said.

The hole is the massive unfunded liabilities the state's five pension plans are carrying. Together they have tens of billions of dollars in investments, but to fully fund the promises made to retirees, they needed $26 billion more as of July.

The state has long tried to invest its way out of that hole but has had an unfortunate track record of paying higher management fees, and getting lower investment returns, than most other state pension plans.

SC pension fund had a $26 billion deficit, then COVID-19 crashed the market

The JSRS plan is a small one compared to others, covering 160 working judges and solicitors as of July 1 and 197 retirees. Those still working will benefit both from the pay increase approved last year and from the pension increase when they retire.

Some will actually get both — higher pay and higher pension payments — at the same time.

Eligible judge and solicitors can collect retirement benefits in addition to their pay if they are working between ages 60 and 72. Those under 60 can sign up for a deferred retirement option that allows them to collect a payout once they turn 60 even if they're still working.

The JSRS plan covers judges on the S.C. Supreme Court, Court of Appeals, circuit courts and Family Court, plus administrative law judges, solicitors and circuit public defenders. Judges are appointed by the General Assembly, which also approves their pay and benefits.