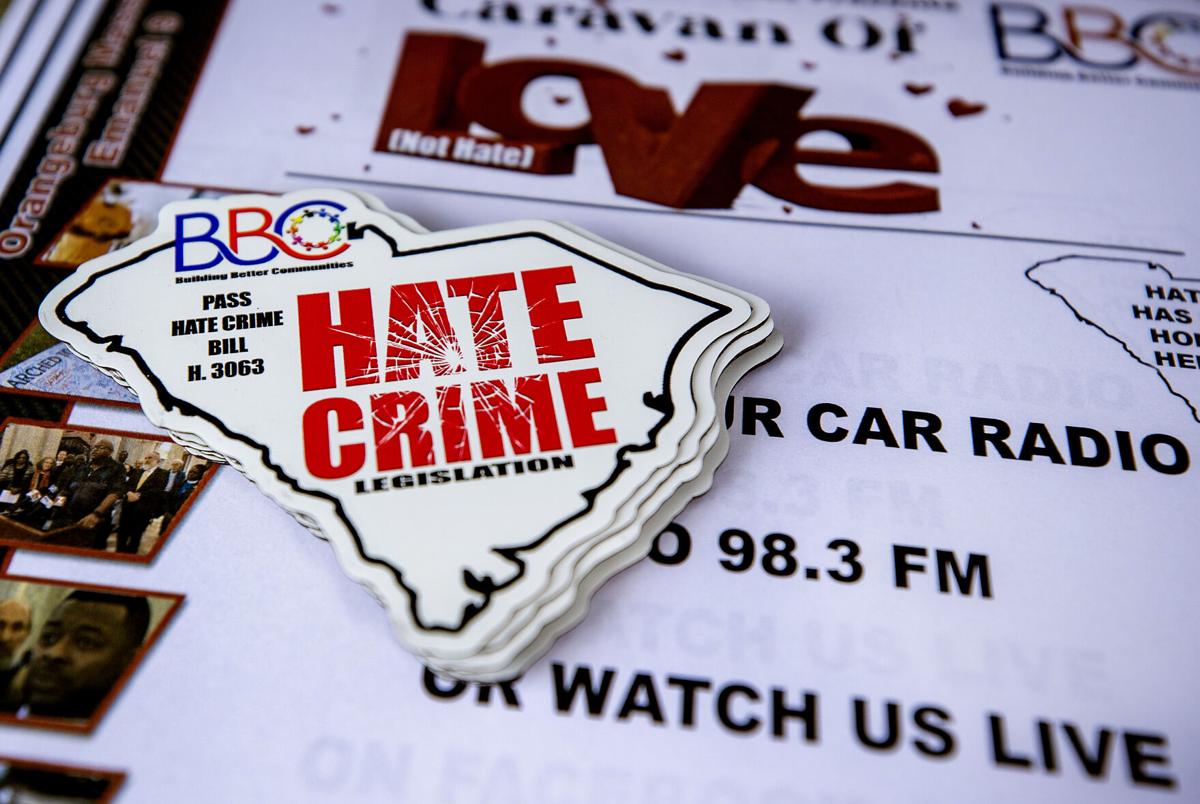 State lawmakers say their chance of passing a hate crimes law in South Carolina are better now than at any time in the recent past. The Palmetto State is one of just three in the nation without such a law. File/Grace Beahm Alford/Staff 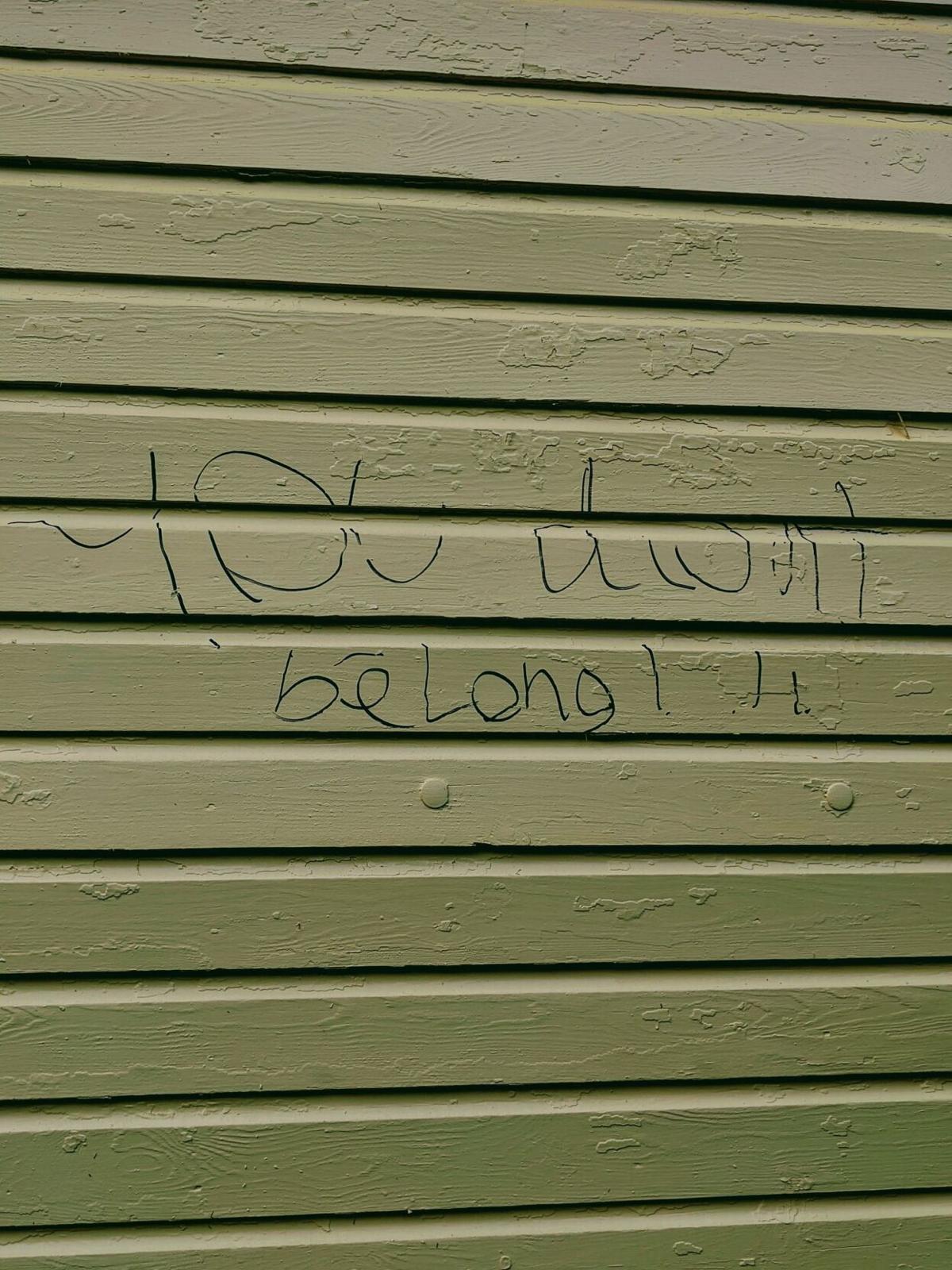 Crystal Stywalt, a resident of Walhalla, found graffiti on a wall of her home that said, "You don't belong," on the morning of Aug. 30, 2020. Stywalt, who is Black, said she hopes sharing her story will inspire more people to take a stand against hate crimes. Provided

Crystal Stywalt was returning home from work early on the morning of Aug. 30 when it caught her eye.

Someone scrawled a message on a wall at her home in Walhalla, which is west of Greenville. It said, "You don't belong."

At first, Stywalt, who is Black, was defiant. She figured the person who wrote those words wanted to intimidate her. She vowed to not let them.

The 44-year-old woman and her boyfriend called police, who took photos of the vandalism and made a report. After officers left, the couple noticed something else, something more sinister.

A drainage pipe below the graffiti was burned. The person who wrote the message on her wall also tried to burn her house down.

Stywalt and her boyfriend called police again. Officers returned with firefighters, who determined the fire was hot enough to set the home ablaze but didn't by some stroke of luck.

"Once I really took it all in, it’s just really hard to believe," she said. "It’s taken me days. I think it’s changed the way I think about this town."

Walhalla police confirmed their agency and the FBI are investigating but could not provide further information, citing the ongoing investigation.

The Palmetto State is one of just three, along with Wyoming and Arkansas, that lack hate crime statutes. Without such protections on the books, experts say police and prosecutors are left with inadequate tools to seek justice in cases in which victims are targeted for their race, religion or sexual orientation.

For several years, S.C. Rep. Wendell Gilliard, D-Charleston, has tried to get a bill officially criminalizing acts of hate passed. Now, he believes momentum is building toward that goal.

A bill he introduced in 2019 was gaining traction during the 2020 legislative session, but the coronavirus pandemic cut short that effort as state officials raced to deal with the disease's impact as the virus spread quickly across the state.

Now, Gilliard again is concentrating on building support for the bill, which he plans to refile in advance of next year's legislative session.

"This has been a long time coming," the representative told The Post and Courier. "My first attempt was five years ago, back when we had the infamous act at Mother Emanuel. Back then we had five states that didn't have a hate crime bill. Now we're down to three."

Gilliard said a wide gap exists between federal hate crime laws and the spotty coverage provided by municipal hate crime ordinances like those passed in Charleston and Greenville.

The federal justice system is faced with a backlog of hate crimes to prosecute, and it can be hard to get more cases into the pipeline, he said. City ordinances only provide limited protection because they are unable to classify the crime as a felony.

Ninth Circuit Solicitor Scarlett Wilson, whose office prosecutes criminal cases in Charleston and Berkeley counties, said she strongly supports passage of such legislation and that the S.C. Commission on Prosecution Coordination has had input into the bill's language.

"Our state has not spoken loudly and clearly about the message we want to send to people who act on hate," Wilson said. "Hate crimes are message crimes. South Carolina needs to have a message of its own in response."

Having a statute would be particularly useful in incidents where the hate-motivation isn't obvious, she said.

Hicks column: South Carolina should be embarrassed it has no hate crime law

In the Emanuel AME Church shooting, Dylann Roof was explicit in his motivation for killing the nine victims: Their race, Wilson said.

But situations like Stywalt's, with no overtly racist symbol used, can prove trickier to pin down.

Authorities could charge someone with graffiti vandalism and arson. While arson carries a stiff penalty, graffiti vandalism is a misdemeanor punishable by a $3,000 fine, up to three years in prison or both, according to South Carolina law.

Wilson said ideally, the bill would make hate crimes a sentencing enhancement rather than a standalone charge.

She believes that setup would be more useful in real-world, courtroom applications.

Regardless of its eventual form, the solicitor said she hopes a bill will be passed next year.

"Crimes based on hate are profound to victims and to community members," Wilson said. "It’s not isolated. When somebody’s house is painted and swastikas are put up, it’s not just that family that’s impacted. South Carolina has a lot of ground to make up in its messaging."

Gilliard said a legislative committee is working to find language amenable to Republican and Democratic legislators and he's optimistic the bill will find the support it needs in 2021.

"To me, that was very encouraging, knowing that we were coming off a year when it actually had a heartbeat," Gilliard said. "Statistics show that hate groups are on the rise in South Carolina. If we had a bill, we would have the authority to keep a record of hate crimes around South Carolina. We shouldn't leave the state waiting. We have to offset the negativity coming from these hate groups."

Pendarvis said the civil unrest that swept the country in the wake of police-involved killings of Black men and women like George Floyd and Breonna Taylor is calling attention to the air of bigotry and racism that exists in the United States, including hate crimes.

"The fact that South Carolina is one of the three remaining states says something," he said.

Pendarvis said he's pleased with the progress he's seen so far on the bill but that he'll need to see it gain measurable traction in the legislature before he's optimistic.

Still, the signs of support are growing.

Building Better Communities, a Columbia-based organization fighting for equity and safety, held the Caravan of Love. More than three dozen people gathered at Emanuel AME Church in downtown Charleston before traveling to Columbia in support of the hate crime bill.

Chase Glenn, executive director of the Alliance For Full Acceptance, and Brandon Fish, director of the Jewish Community Relations Council of Greater Charleston, have been building a coalition of 150 community organizations, businesses and other groups to support the bill.

In the past, groups around the state supported the passage of such legislation, but didn't work together and speak with one voice, Fish said. Now, they aim to remedy those past failures.

"We're getting legislators to work together on a single bill," he said. "On our end, we decided the best thing to do was to get support."

Fish and Glenn have been circulating a petition and gathering signatures from around the state. They plan to present the statement showing broad support for the bill to lawmakers when the session begins next year.

Hate crimes tend to go unreported or underreported, he said. People are fearful to come forward and report these crimes because they're afraid of how they'll be received.

Stywalt, the Upstate woman whose home was tagged with graffiti, said she's heard the same from members of her community.

"Other people have come to me and told me these things are happening to them," she said. "Nobody's reporting this stuff. They don't go to police."

To learn more about efforts to pass a hate crime bill, or to sign on in support, visit stampouthate.sc.