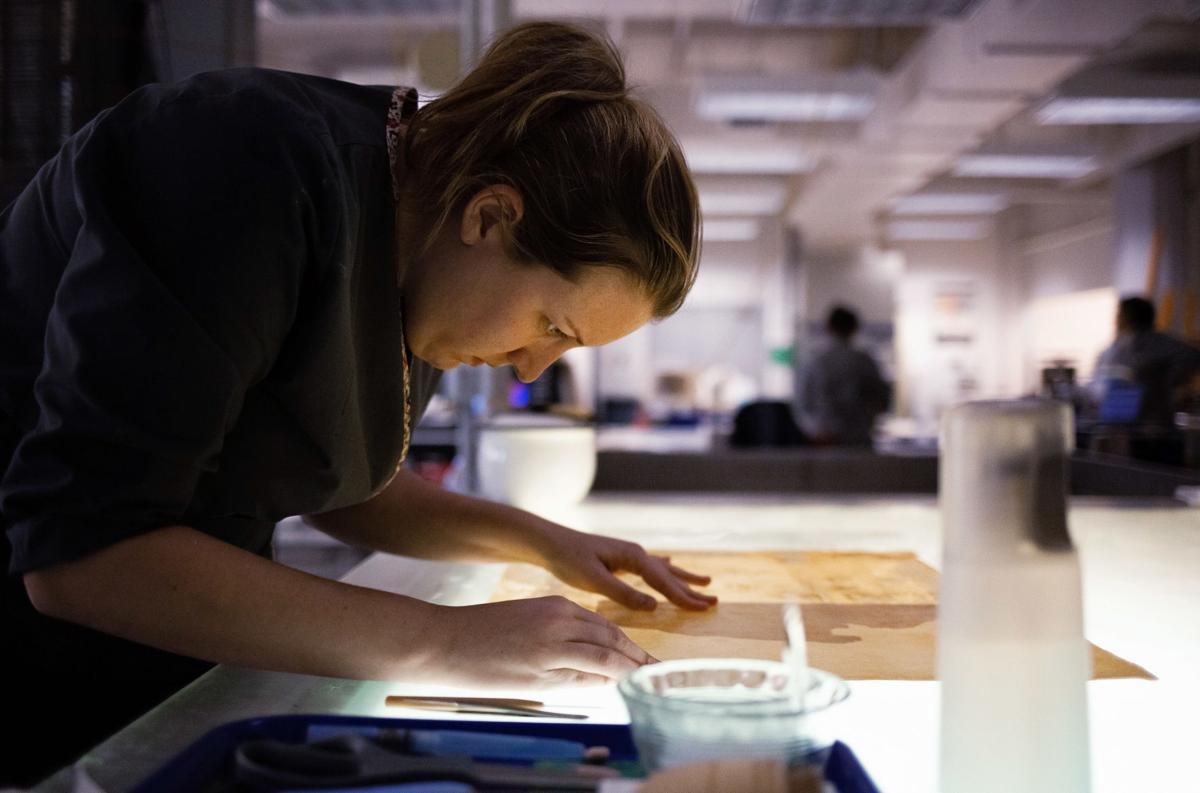 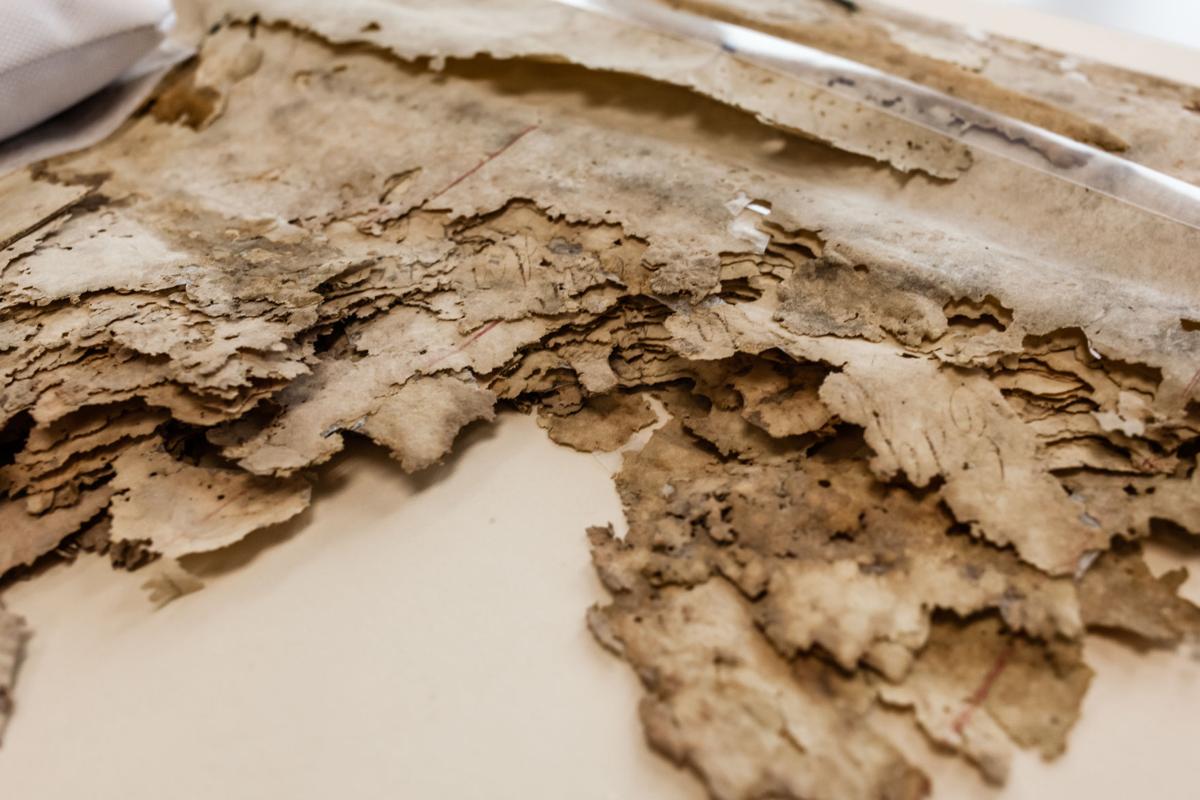 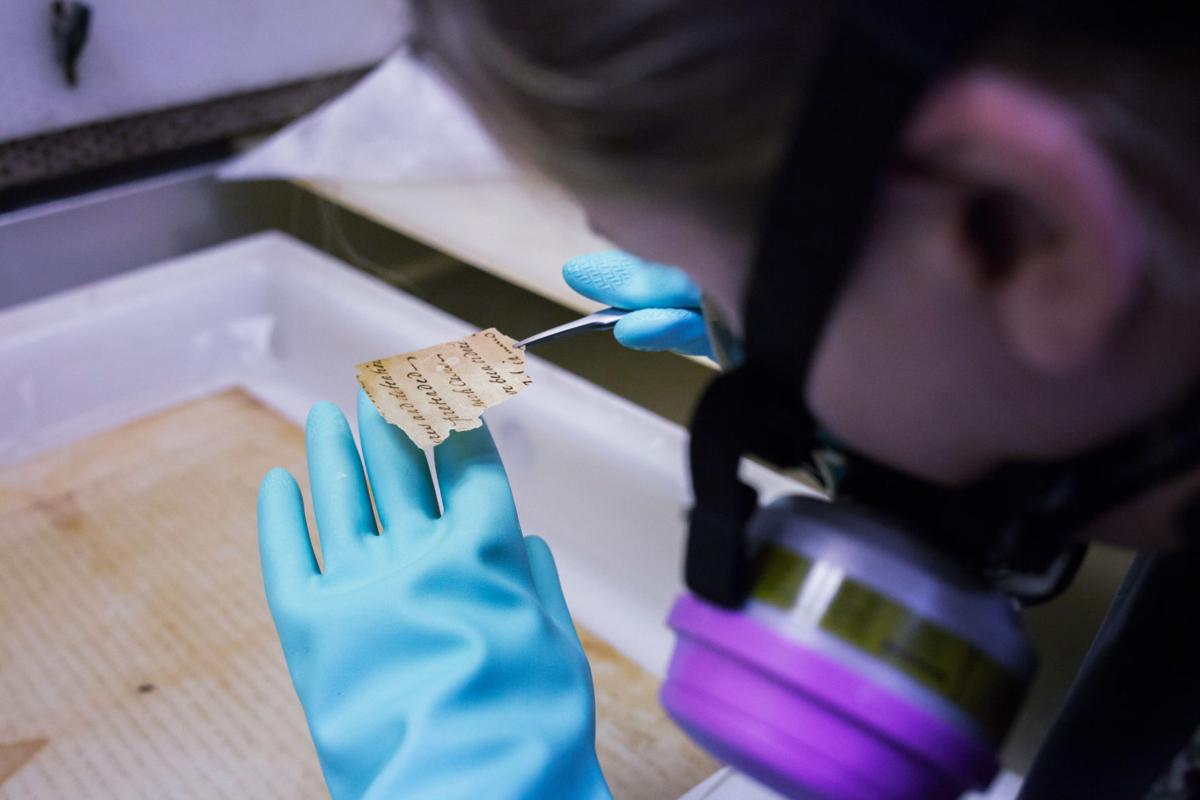 Katie Boodle, associate conservator at the Northeast Document Conservation Center, inspects a small fragment of one of South Carolina's constitutions. Boodle, who served as the project lead, is a Greenville native. NEDCC and SCDAH/Provided 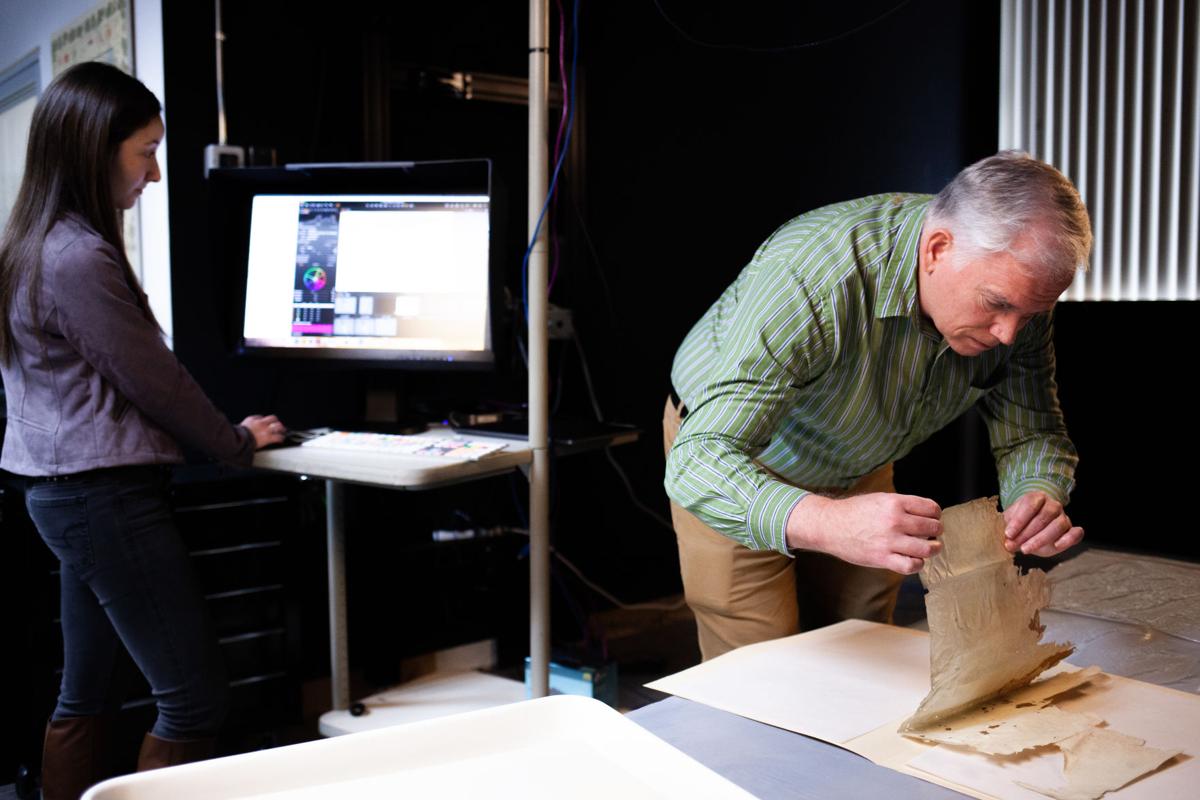 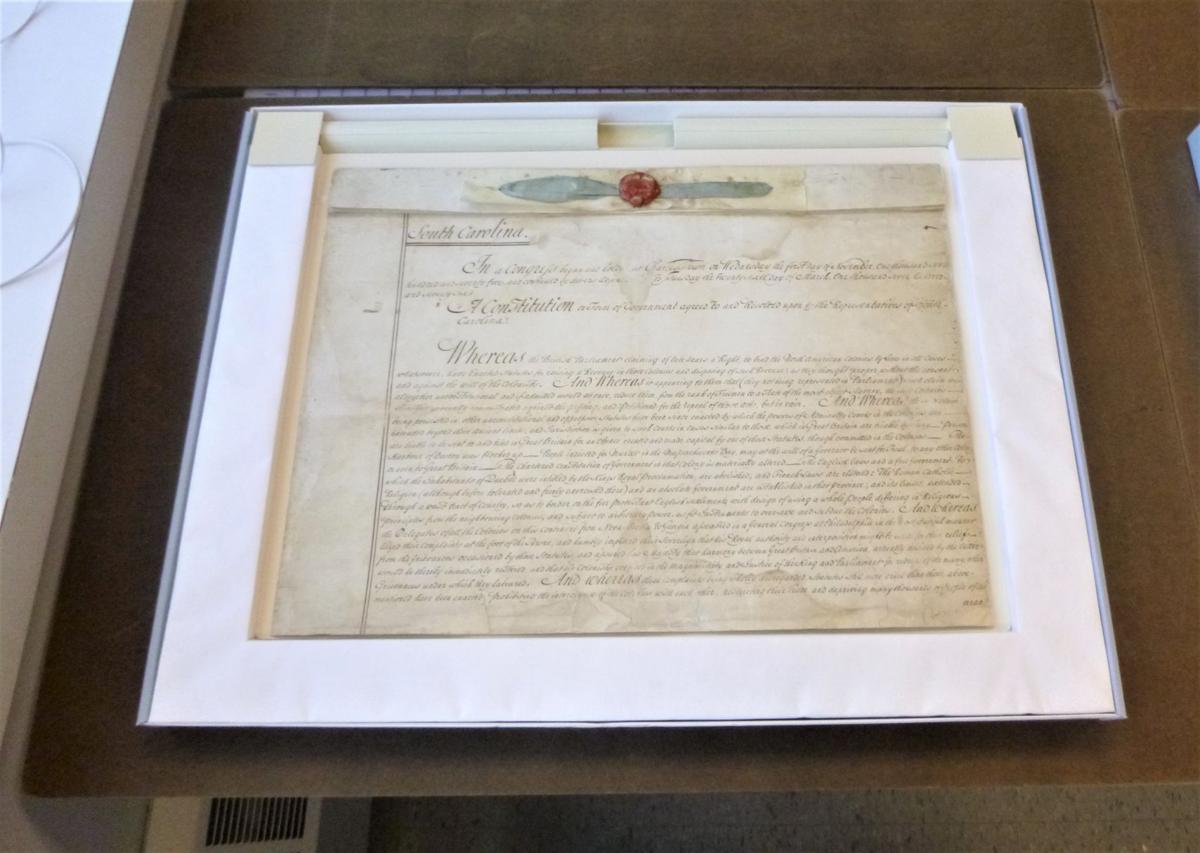 South Carolina's constitution from 1776 in a custom fix box. NEDCC and SCDAH/Provided 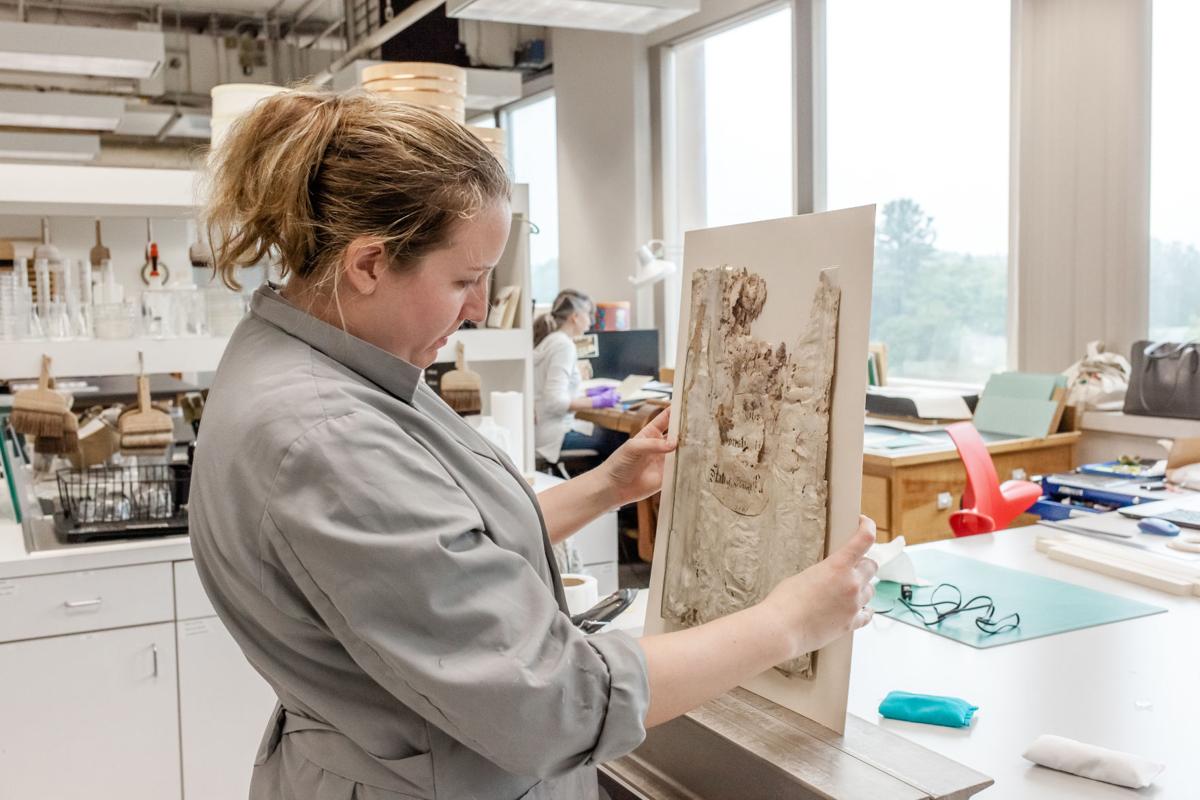 Some of South Carolina's most important documents were in need of repair.

The state's constitutions, which range in age from 125 to 244 years old, hadn't always been treated well.

The oldest ones likely endured sweltering summers in Charleston. Even when state records got a permanent home in Columbia, the storage rooms of years past were often damp, dirty and unorganized.

And preservation techniques employed decades ago to strengthen some of the constitutions actually threatened to cause them lasting damage. Those documents were "potential time bombs," said Patrick McCawley, who oversees records management at the S.C. Department of Archives and History.

So, about a decade ago, the stewards of South Carolina's historic records started discussing what it would take to preserve them.

It took time to plan and more time to secure funding but, by early 2019, they were ready to charge forward with the project.

The documents, packaged in custom-made boxes, were carefully loaded onto a state-owned plane at Columbia's airport one morning in February last year.

When the plane touched down later that day in Boston, the constitutions were quickly whisked away to the Northeast Document Conservation Center, where a team of conservationists would spend months poring over the objects, doing work that would preserve them.

Katie Boodle doesn't play favorites — not when it comes to historic artifacts.

But when the Greenville native and NEDCC associate conservator got the chance to help restore her home state's constitutions, she couldn't lie. It was exciting.

First, the documents had to be thoroughly assessed and tested. They measured the stability of the inks and the pH levels of the paper. The conservation techniques they would use depended on the needs of each constitution.

The precise journey each of the documents took to eventually come into the care of the S.C. Department of Archives and History is unknown, but the evidence of what they withstood is on the pages themselves. The documents have had what Boodle described as a "very hard life."

That's especially true for the 1861 constitution. It was partially eaten away by mold and insects. Other documents showed the kind of the damage that comes from exposure to heat and high humidity — not a surprise, since they spent their years in Charleston and Columbia and, for most of their existence, not in temperature-controlled environments.

But one of the primary concerns the state's archivists had for the constitutions was related to a process that was meant to protect them. It started with the original 1776 constitution, which a state senator discovered in 1940 in a poorly kept, damp storeroom in the basement of the Statehouse.

Editorial: This year's National Preservation Month may be more important than ever

The constitution was sent to Richmond, Va., to William Barrow, who pioneered what was then considered a cutting-edge conservation technique. His lamination process, which involved using heat and rollers to seal paper between sheets of tissue and cellulose acetate, was meant to strengthen and protect the documents.

Eventually, South Carolina got its own lamination machine and used the process on many aging records, including its constitutions.

It wasn't learned until later that the lamination method could actually cause permanent damage to the original paper. The cellulose acetate was degrading, causing the paper fibers of the constitutions to pull and split, creating cracks and breaks.

But the delamination process comes with its own risks.

In the process — which, in this case, involved submerging the documents in a bath of water, acetone and ethanol until the tissue layer floated off — there's a chance certain kinds of ink can dissolve and bleed onto the paper.

Boodle said they went through an intensive testing process to see how the ink would respond, and they decided it was safe to proceed.

After the delamination, more work was done to stabilize and preserve the documents. Dirt was removed and tears mended. The 1861 and 1868 constitutions required special mold treatments.

By mid-July, the constitutions were again carefully packaged and flown back to South Carolina. While they're not on display now, McCawley said they're hoping to show off the newly restored documents in an exhibit at their facility in Columbia, likely sometime next year.

Clues about the past

Each constitution marked a kind of shift in the state's history. Some were more practical. For instance, the first constitution in 1776 was adopted with the intent that it would be a temporary document, McCawley said, which is why they wrote another just two years later.

In 1868, the constitution that was adopted was considered revolutionary: It gave all African American men the right to vote and established the framework for the first statewide public education system.

"Each has their own element of importance to South Carolina history, but, as a whole, they represent the foundation on which our present system of government is based," McCawley said.

Her journey to Charleston began in a slave ship. Her family legacy is a story in triumph.

And it's not just the words of the documents that reveal clues about the state's past, Boodle said.

The later constitutions, 1868 and 1895, are bound volumes, while the earlier documents are more varied in format. Most were sewn together at some point, and some still retain their original sewing.

"Their format speaks to the time," Boodle said.

There was also a back-and-forth on what kind of material was used to record the constitutions. Some used paper and others parchment, which was harder to acquire.

The papers from the 1865 constitution were particularly interesting, Boodle said: They had a specific watermark for the Confederate States of America.

McCawley's favorite detail, he said, is from the constitution signed in 1895.

At that convention, the delegation from Beaufort was led by Robert Smalls, who was once enslaved and famously claimed his freedom by stealing a Confederate ship in Charleston Harbor. He went on to become a prominent politician and a fierce advocate for civil rights.

Smalls strongly opposed the new constitution, which reversed much of the progress made during Reconstruction. It effectively took the vote away from African Americans and laid the groundwork for Jim Crow segregation.

Evidence of Smalls' resistance is still there on the pages of the document that is more than a century old. In the section where delegates from across the state signed their names in approval, there's a space for the delegates from Beaufort County, left blank.