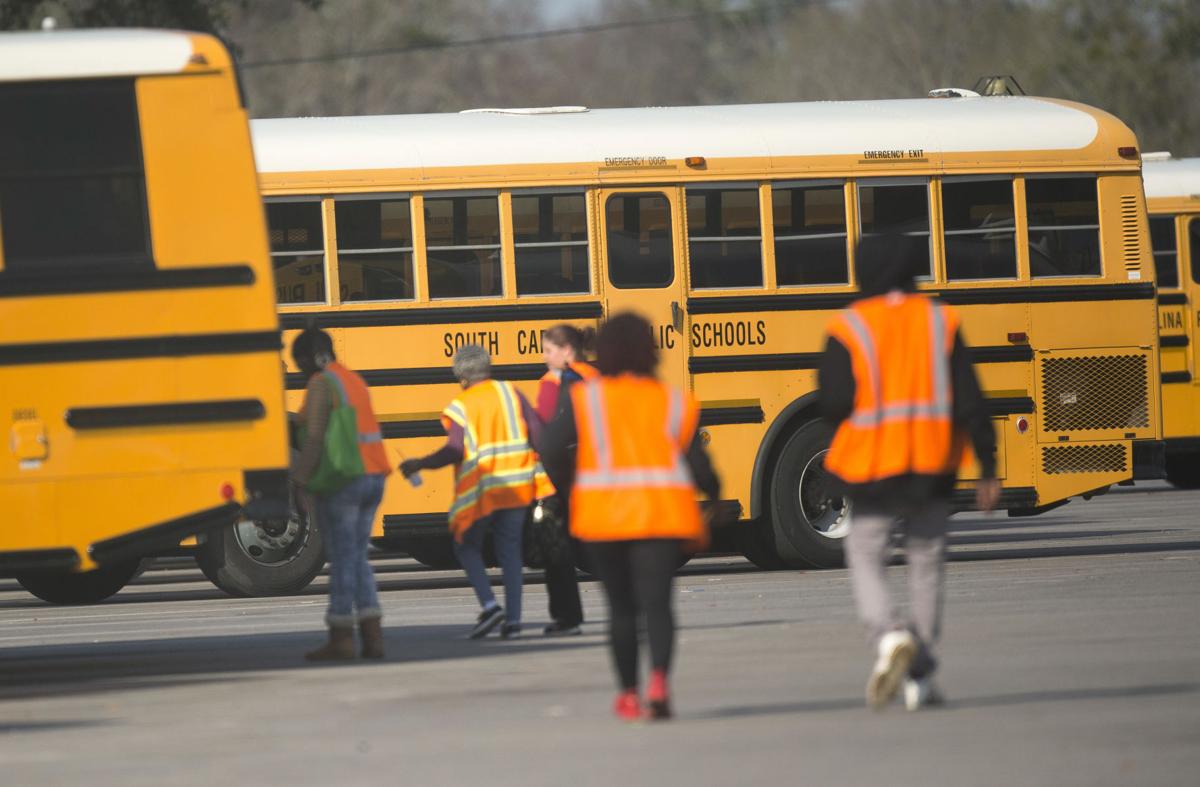 School bus drivers get ready to leave to pick up students at the bus parking lot in North Charleston. Andrew J. Whitaker/ Staff 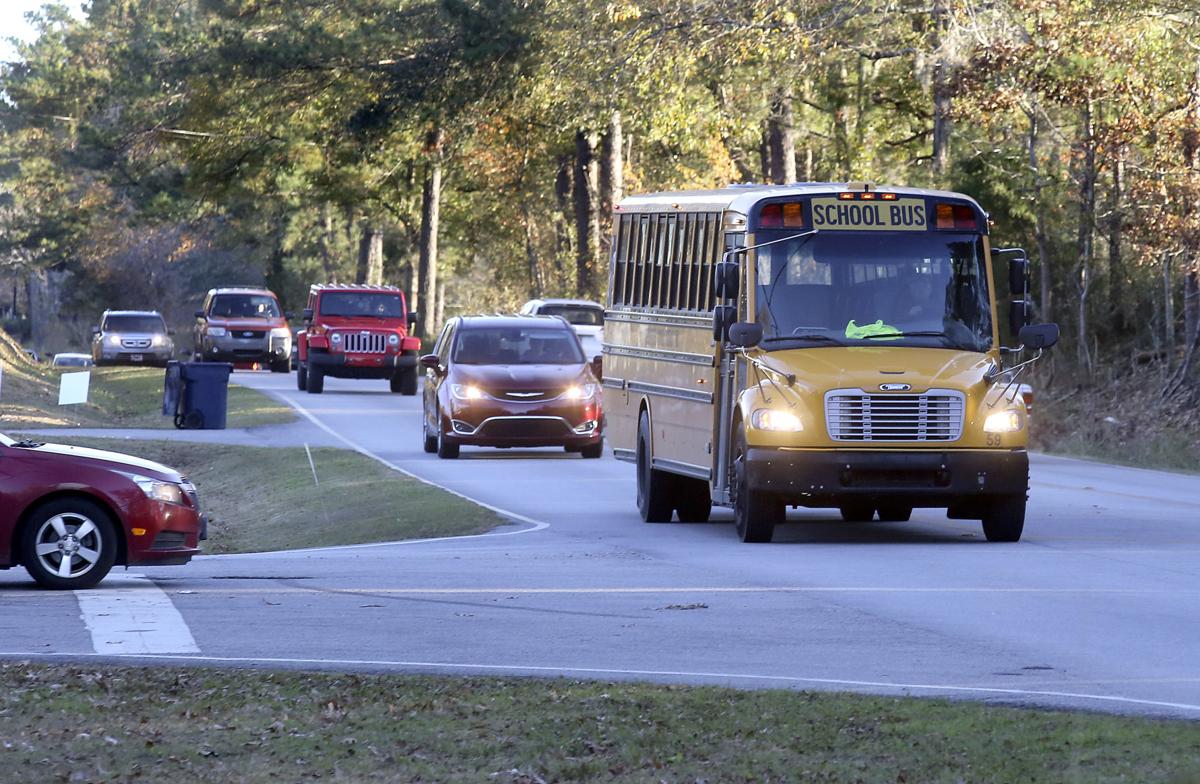 A school bus makes its way down Orangeburg Road the afternoon of Thursday, Dec. 5, 2019. Brad Nettles/Staff

School buses can foster an ideal setting for violence and bullying.

But it’s difficult to find out how common bus fights are in some of South Carolina’s largest school districts.

After a bus fight left one student hospitalized and three others arrested in October, The Post and Courier spent months trying to find out where and when bus violence occurs.

Reports of isolated bus violence often surface in the media, but South Carolina lacks an easily accessible, comprehensive resource for parents who want to know how safe the buses are in their neighborhood or their school district.

Districts are required to maintain a record of behavioral incidents, per S.C. Board of Education regulations. But some of the largest districts repeatedly told the newspaper they did not actively document where those incidents occur.

If this information does exist, it's not easily accessible by parents or the public.

Some school districts, including Charleston, do track this information. It was made available to the newspaper almost two months after it was originally sought via a public records request.

District officials from Horry and Greenville repeatedly told the newspaper that they were unable to distinguish between fights that occurred on school grounds versus ones that happened on school buses.

Richland County School District One did not initially respond to a public records request for information on school bus fights.

More than two months later, the district’s attorney responded but did not confirm if the requested records existed.

When asked if the district could determine how many fights occurred on its school buses from year to year, Kathleen Joye, the district’s director of transportation, responded with one word in an email to the newspaper — “Unknown.”

Cristell Wooten said her son was repeatedly hit, kicked, punched and threatened in the hallways and on his commute back and forth on the school bus to Liberty Hill Academy in North Charleston.

He lasted less than 30 days at that school before Wooten decided to transfer him, fearing for his safety and mental well-being, she said.

"I watched my son get punched in the face when I was on video chat with him. They took his phone and passed it around the bus,” Wooten said. “And all this occurred and the bus driver never even stopped the bus. Never said a word.”

Wooten is in the middle of a lawsuit against the district and Durham School Services, CCSD's longtime transportation vendor. She alleges that CCSD and Durham “failed to prevent and respond appropriately to multiple instances of bullying” her son repeatedly faced.

"I already failed my son by sending him there repetitively. I sent him there every day with the promises that they were going to resolve the issue. And they never did," she said.

Wooten said she believes bus fights happen “way more than they are reported."

“I don’t think they report it enough,” she said. “When it came to my son, I spoke out about it.”

Wooten alleges that there were multiple times when no reports from the school district were generated after her son was assaulted on the bus.

A Durham spokesman said the company does not comment on any pending litigation. A Charleston County spokesman also declined to comment on the allegations.

School bus riders are often confined in a tight space for long periods of time with other students of varying grades and personalities. Students can be tired, wound up, hungry, anxious and eager to release energy during their travel to and from school.

This, combined with a general lack of direct adult supervision, can create the perfect space for teasing, bullying and fighting.

Student misbehavior is a "reality of student transportation," said Josh Hendrix, a research criminologist at RTI International and the lead researcher of a national study on bullying and violence on school buses.

Because it is a separate entity from the school campus, managing student behavior on buses comes with "a lot of really unique challenges."

"It does seem like, compared to virtually any other school setting, this is where kids have the most freedom to act as they wish," Hendrix said.

And most of the time there is only one adult present on school buses — the driver.

"That's one reason we have to call public safety, because we don't have an administrator or two teachers down the hallway that can help," Scott said.

"Even when adults do get there, if it is still an active fight, getting to it quickly is difficult," she said.

And Durham's bus drivers must adhere to a strict no-contact policy, according to spokesman Ed Flavin.

If a fight breaks out on a bus, the driver has been trained to pull over as soon as possible in a safe area and then to call dispatch. Depending on the severity of the incident, they would call 911 or local security agencies, Flavin said.

"A driver is not allowed to intervene or have any contact with the children at all," he said.

'No way of knowing'

Figuring out how common bus fights are can be a difficult task, depending on what school district you live in.

All school districts in South Carolina have access to PowerSchool, an online portal that teachers and administrators use to input behavioral, academic and attendance data, said S.C. Department of Education spokesman Ryan Brown.

The department trains administrators to always enter a location, like bus, cafeteria, or classroom, when they input behavior referral forms into PowerSchool, Brown said.

In Greenville County, the state’s largest school district, district administrators use a different software to input this information, which is later transferred to PowerSchool.

Because of this, the district has "no way of knowing if a fight occurred on a school bus or if it occurred somewhere else,” according to spokeswoman Teri Brinkman.

“Horry County Schools does not break down the location of where a fight may have taken place, i.e. gym, cafeteria, football field, bus, etc.,” Bourcier said.

Bus fights are reported by drivers and logged into PowerSchool by school administrators, but where the incident took place is not recorded, she said.

To complicate things further, the system still allows behavioral incidents to be coded electronically as a generic "Bus Violation," which doesn't break down the incident type. It could cover everything from swearing to acts of violence.

The Education Department did not initially respond to a public records request for five years of data on all fights, assaults and violence on school buses reported via PowerSchool.

The department did provide data for only the last school year Friday afternoon, although Brown said it wasn't "verified by the office responsible for overseeing the incident management system."

There were inconsistencies between this data and what some districts provided. For example, Charleston County reported 363 fights on school buses, but the state reported 231 bus fights for the district.

Across the state, there were more than 3,000 fights that were reported without a location, Brown said. More than 1,500 incidents coded as hitting, kicking or pushing were also missing a location.

"Our data office believes large districts such as Greenville not using the state system and thus having to import data is a large part of the discrepancy," Brown said. "We have added additional training specifically around the coding of location, so hopefully the missing data spots will improve."

2 weeks ago, a SC 5th-grader died after a school fight. Still, nobody knows how or why.

"If you’ve got a student who is regularly partaking in fights, then there’s something going on with that student, and where they occur doesn’t necessarily impact how you will address that student’s individual needs," she said. “It’s not like it's a mystery where you might have behavior issues.”

In addition to tracking the location of fights through PowerSchool, the S.C. Department of Education requests that all school districts in the Palmetto State fill out a certain form to report all bus incidents, including car accidents and fights, Brown said.

Schools fill out this form “pretty much all of the time” for car accidents, but for things like fights, “it’s kind of hit or miss whether or not we actually receive them," Brown said.

He said the state usually finds out about the major fights that happen on its school buses, but added, “Sometimes we find out a little later than we’d like to.”

"In a perfect world, we’d find out news involving our school buses from that reporting mechanism, but again, that’s only in a perfect world," Brown said. "I'd say that probably happens 25 percent of the time.”

Schools use information like this to assess and respond to trends or repeated incidents of violence on certain bus routes, Coker said.

“If we don't know where the fights are occurring, it’s very hard to create a plan to help decrease that or change behavior.”

For example, if a school notices a heavy amount of behavior issues on certain buses, a monitor could be added to the route.

"If we don't have a way to look at it by location, we can't respond," Coker said.

Collecting data on bus fights or misbehavior can be an essential tool for school districts, Hendrix said. "Whoever is overseeing the transportation department, it's smart business practice to know what's going on on their buses.”

This data can help administrators identify problems on individual bus routes or identify large-scale trends. It can also be a tool that districts can use to study the effectiveness of new behavioral practices or technology on school buses.

"I think without that data being captured systematically, you're relying on perceptions or other things to guide you," Hendrix said.