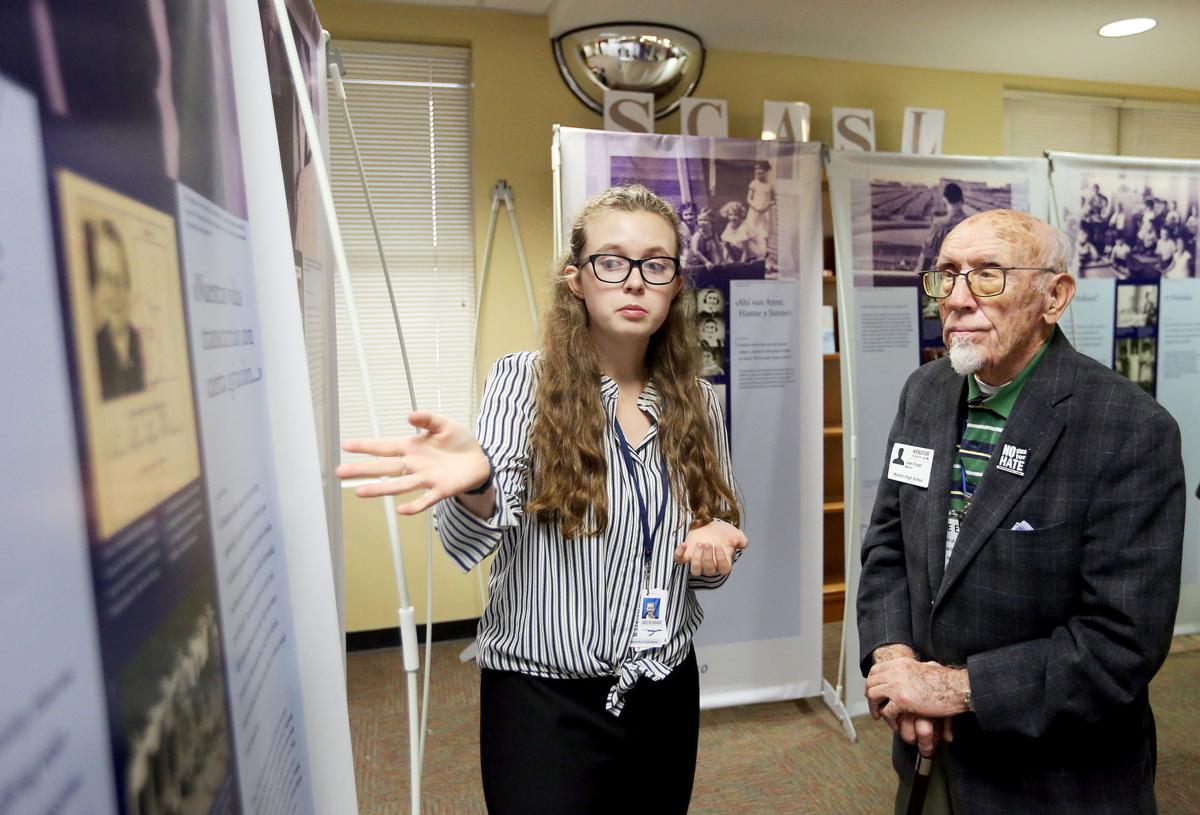 Wando High School freshman Madeline Cahillane along with other students give local Holocaust survivor Joe Engel a tour of the Anne Frank exhibit at the school Wednesday, October 30, 2019. Brad Nettles/Staff 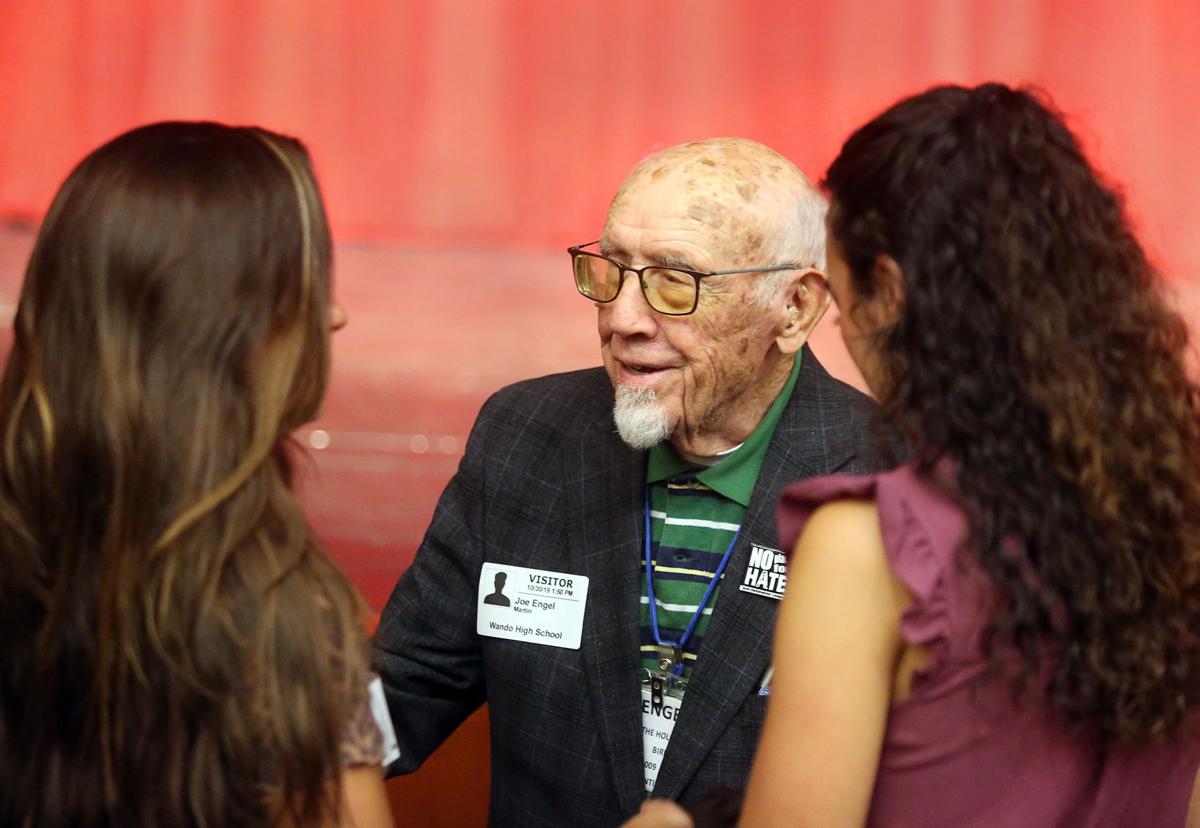 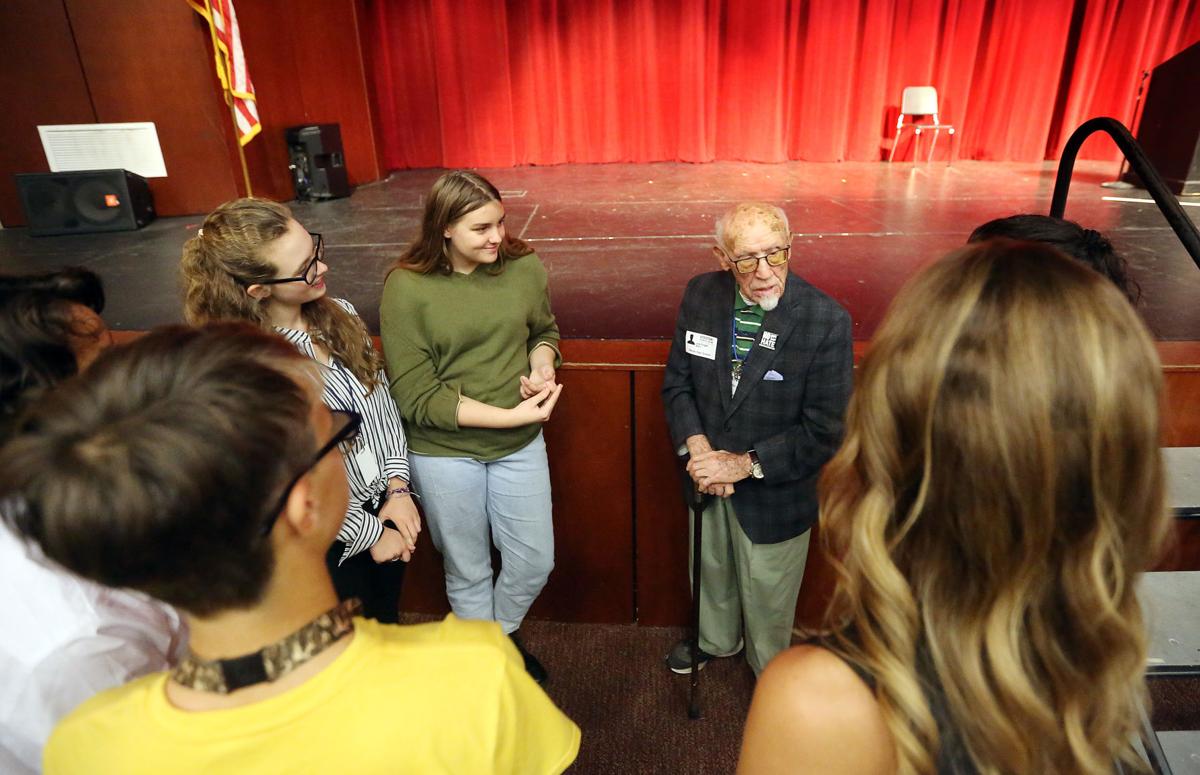 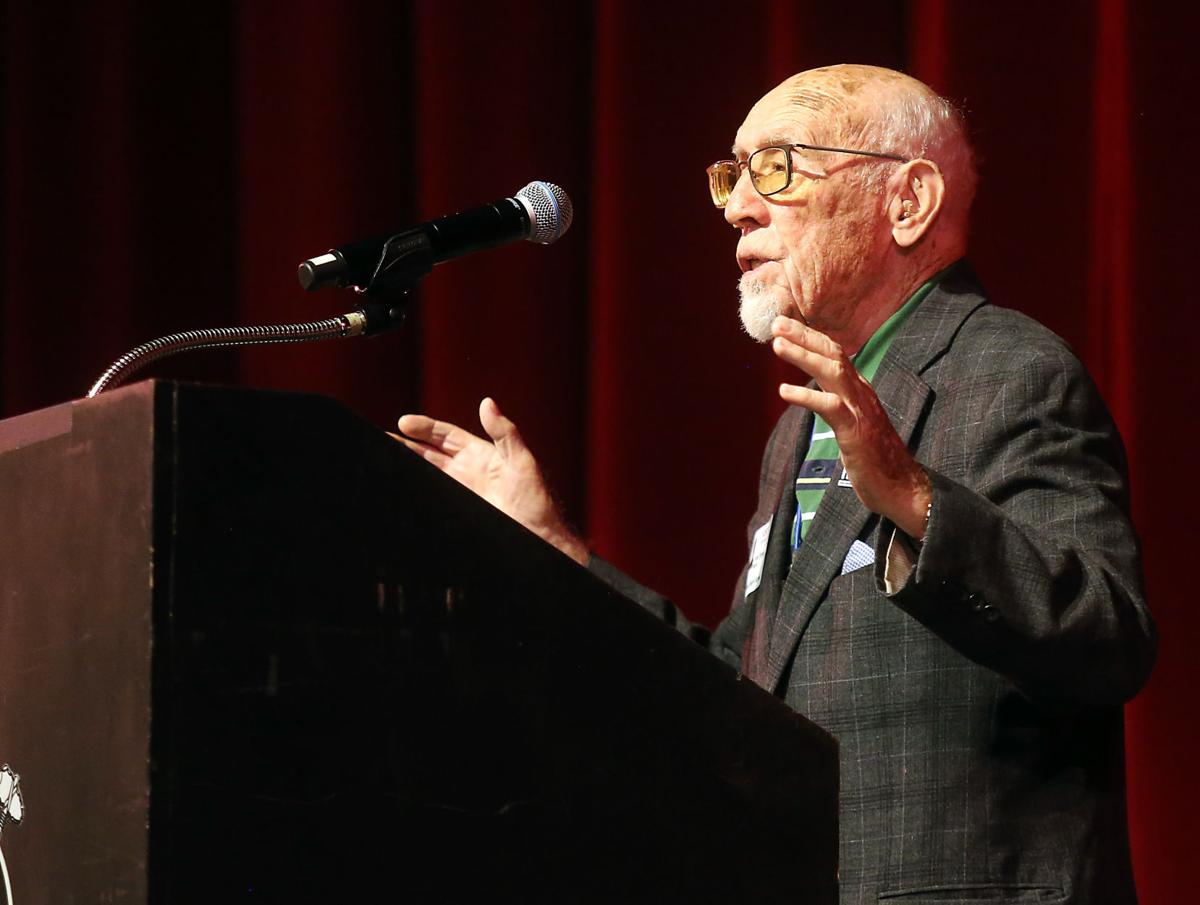 Local Holocaust survivor Joe Engel speaks to Wando High School freshman Wednesday, October 30, 2019, on how he was able to survive the holocaust before touring an Anne Frank exhibit at the school. Brad Nettles/Staff

Nineteen first-year students at Wando High School have spent upwards of 20 hours each learning about the Holocaust and giving tours of an international traveling Anne Frank exhibit to hundreds of fellow students and community members.

After volunteering as docents for almost a month, they had the opportunity to share what they learned with someone who experienced the Holocaust's horrors firsthand. And they had a chance to learn more from him, too.

Local Holocaust survivor Joe Engel visited the school Wednesday to share his story of how he survived Birkenau and Auschwitz concentration camps in Poland as a teenager.

After Engel told his story and answered students' questions, the docents led him on a tour of “Anne Frank — A History For Today,” an exhibit that tells the story of Anne Frank against the background of the Holocaust and World War II.

"There are a lot of books written about it, but I saw it with my own eyes," Engel told students. "Every week they made selections on who should live and who should die."

"Be thankful that you live in the United States," he added.

To Auschwitz and back: Holocaust survivor Joe Engel's story preserved forever on film

The exhibit came to Wando’s English Department through a partnership with the Anne Frank House in Amsterdam and the University of South Carolina College of Education.

On average, each student docent gave two or three 20-minute tours every week. There wasn't a script they had to follow, so each tour was a little different, said freshman Maddie Cahillane.

Cahillane said she toured as many as two or three groups a day.

“I had to skip class sometimes … and that caused a little bit of mayhem, but it was worth it,” she said.

In addition to the full two-day training all docents completed, Cahillane and other students often spent additional time researching the Holocaust.

“It put everything into a different perspective and really showed how lucky you are and how you should be grateful for everything — even the really small things like family dinners or just sitting and talking to your mom,” she said.

For Cahillane, another takeaway from the exhibit was learning about anti-Semitism and its lingering effects.

“It teaches people that even though this happened only a couple decades ago, it's still prominent now,” she said.

Peri Dessner, another student docent, said she enjoyed the opportunity to teach other students.

“A lot of the time, I feel when teachers are talking to kids about the Holocaust, (students) think they know all of this stuff. And it kind of just goes right over their head,” Dessner said. “But I think as a teenager, when we share the information, they have more of a respect for us.”

The exhibit was designed to be peer-led, said Morgan Bailey, the University of South Carolina College of Education's traveling exhibits manager.

“It's not me as a Holocaust educator teaching people. It’s kids that are learning and going out to talk to their peers about it,” Bailey said.

Dessner said she had family members who died during the Holocaust and felt the exhibit opened many students' eyes.

“I think a lot of students don't realize how hurtful like jokes about the Holocaust can be,” she said. “I had a kid actually come up to me and apologize for saying one to me.”

Erica Grohoski, a media specialist at Wando, was impressed by the passion and the dedication the students put into their tours.

“Teenagers usually aren’t really good with explaining things to their peers, they tend to clam up,” Grohoski said. “These guys were just confident, and they just told the story with so much passion that I didn't think was possible from them.”

The student tours ended on Oct. 25, but the exhibit is expected to remain throughout next week, Bailey said.

Daffodils planted at College of Charleston in honor of Holocaust survivors, victims

A modified version of the exhibit aimed toward younger students will come to Westview Elementary School in Berkeley County in late November.