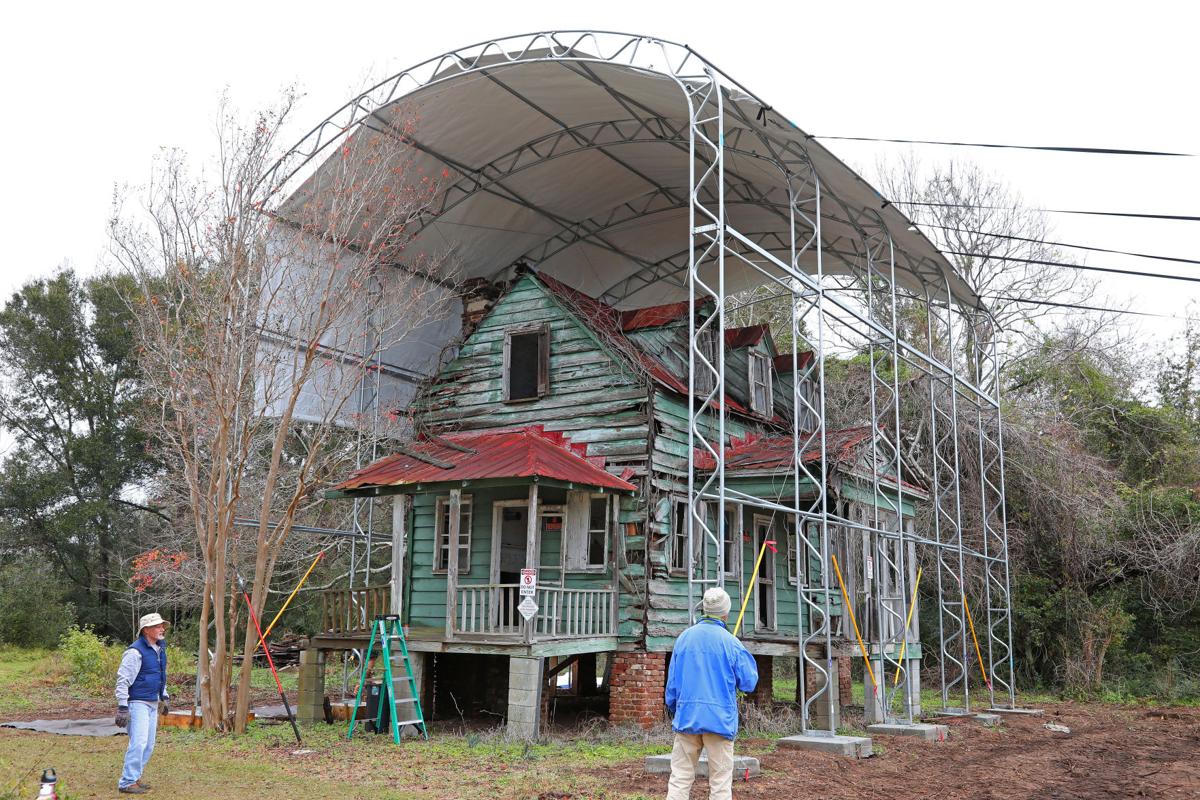 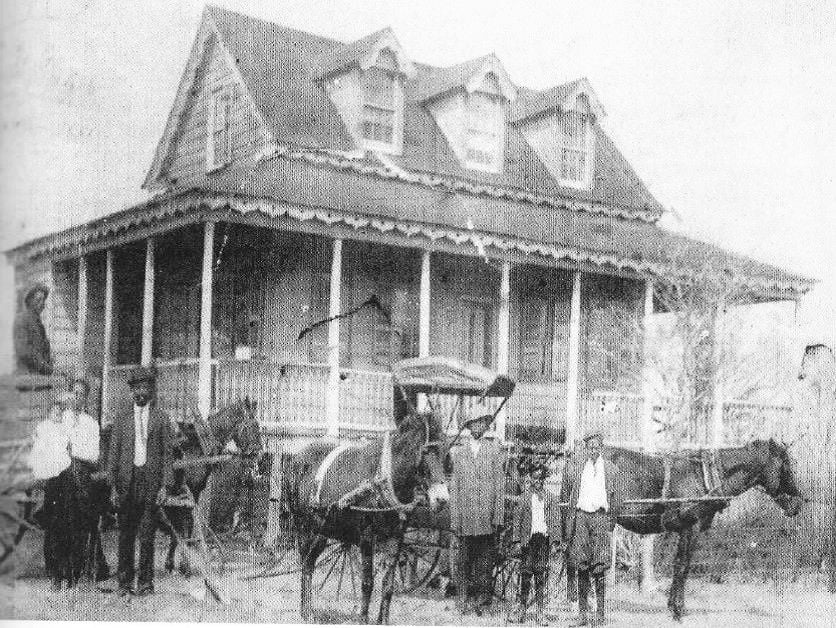 This photograph shows the Henry Hutchinson House on Edisto Island in about 1900, when it was only about 15 years old. The land trust that now owns the home hopes to restore it to this look, mainly by adding back the porch. Provided 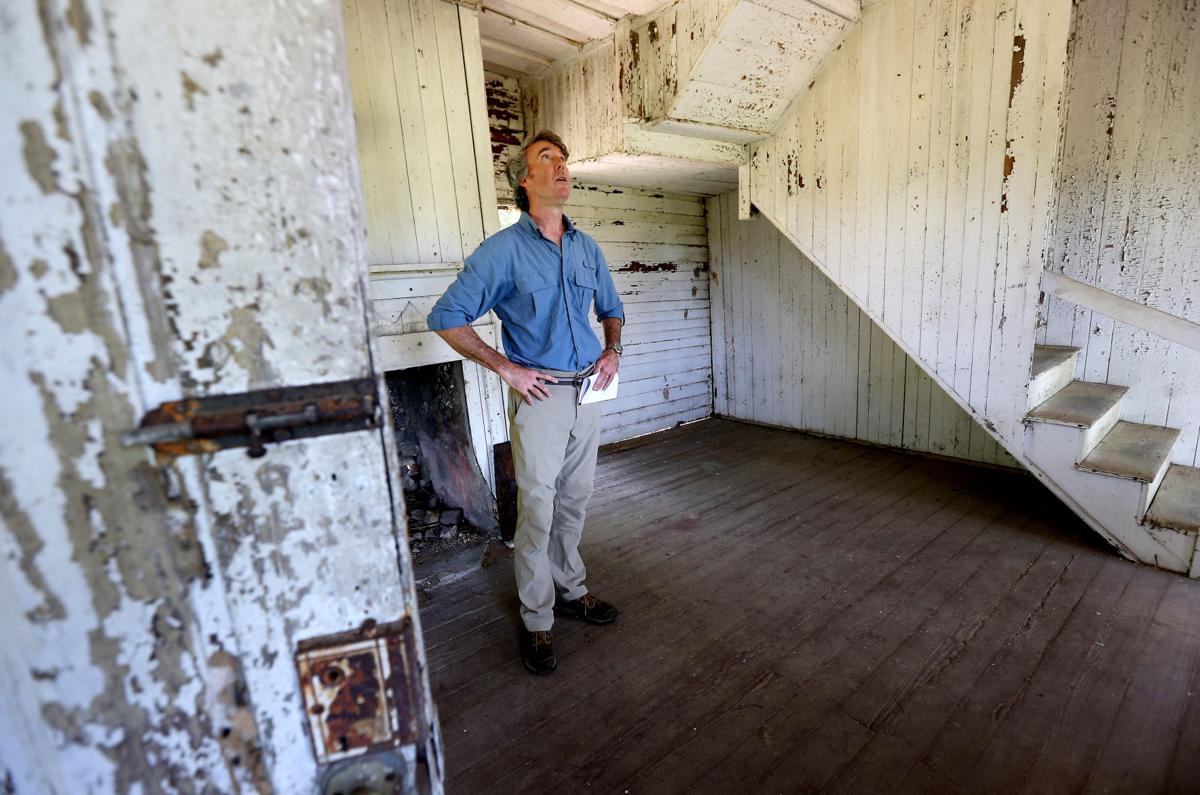 This photograph shows the Henry Hutchinson House on Edisto Island in about 1900, when it was only about 15 years old. The land trust that now owns the home hopes to restore it to this look, mainly by adding back the porch. Provided

EDISTO ISLAND — Houses are built to provide shelter, but one of this island's most historic homes needed — and just received — a shelter of its own.

Earlier this year, the Edisto Island Open Land Trust purchased the Henry Hutchinson House and 10 surrounding acres for $100,000, but trust officials knew they couldn't start repairs right away on the vacant, deteriorating 1885 home.

Instead, it erected a large tent over it to buy time.

"It can't hurt to do this, that's the bottom line," said John Girault, the trust's executive director. "We don't want to see it continue to deteriorate in front of us. We want to take our time."

The massive tent, which cost about $13,000, was installed recently by volunteers. Girault said it was designed specifically to shield the home from most of the rain but not enclose it so much that it holds moisture, which could cause rot.

"It can breathe, but it will stay mostly dry," he said, adding the tent also will make working on the home more pleasant.

The trust hopes to have raised the money to pay for the purchase and the tent by year's end, then future fundraising will focus on paying for its restoration, he said.

That money won't be needed soon. Next year, students with the American College of the Building Arts, working under historic preservation professor Christina Butler, will begin researching the house's history and construction as a school project at no cost to the trust. An archaeological survey also is in the works.

The students' work is expected to create a sort of blueprint about what repairs are most urgent — and what sections of the home are so far gone that they cannot be salvaged.

That preservation plan will help guide the scope of future work. It also could inform the trust's future plans for the property. Girault said the trust's current vision would reopen the house as a largely unfurnished museum piece, like Drayton Hall, but no firm decision has been made.

The trust also has reached out to Hutchinson's descendants. Greg Estevez, who grew up in Charleston County but now lives in Jacksonville, Fla., recently attended a trust fundraiser to talk about the project.

Estevez, one of Henry Hutchinson's great-great-grandsons, said he remembers spending Christmas mornings in the house in the 1970s.

"That was one of our favorite memories as kids because it was exciting. At the same time, as kids it was kind of scary. It had these old pictures on the wall and oftentimes it seems that eyes are following you,” he said. "But we loved it. It gave us a sense of belonging and family."

The house was built about two decades after the Civil War, when some newly freed slaves on this sea island were faring well. Henry Hutchinson was the son of one of the island's most prosperous African-Americans. The house features three dormers and eaves decorated with stylish Victorian detail.

Its importance to the region's African-American history also is underscored by its location just down Point of Pines Road from one of the island's last surviving slave cabins, which recently was removed and placed in a prominent position in the Smithsonian's National Museum of African American History and Culture in Washington, D.C.

Henry Hutchinson lived in the house until his death in 1940. Other family members continued living there until about 1980. It has been mostly vacant since.

Estevez said he is excited about the prospect of its preservation.

“My grandmother’s life wish, her life’s passion, was to see the home eventually become a museum so people can understand that 20 years out of slavery, the blacks then were very industrious and prosperous,” he said.

The house is off-limits to visitors today, but Girault said the trust hopes to build a small gravel driveway and parking area off Point of Pines Road for those who want to view the house from a distance.

Historic gem on Edisto to be restored

The Edisto Island Open Land Trust recently purchased the Henry Hutchinson House and is planning to restore it for public viewing.