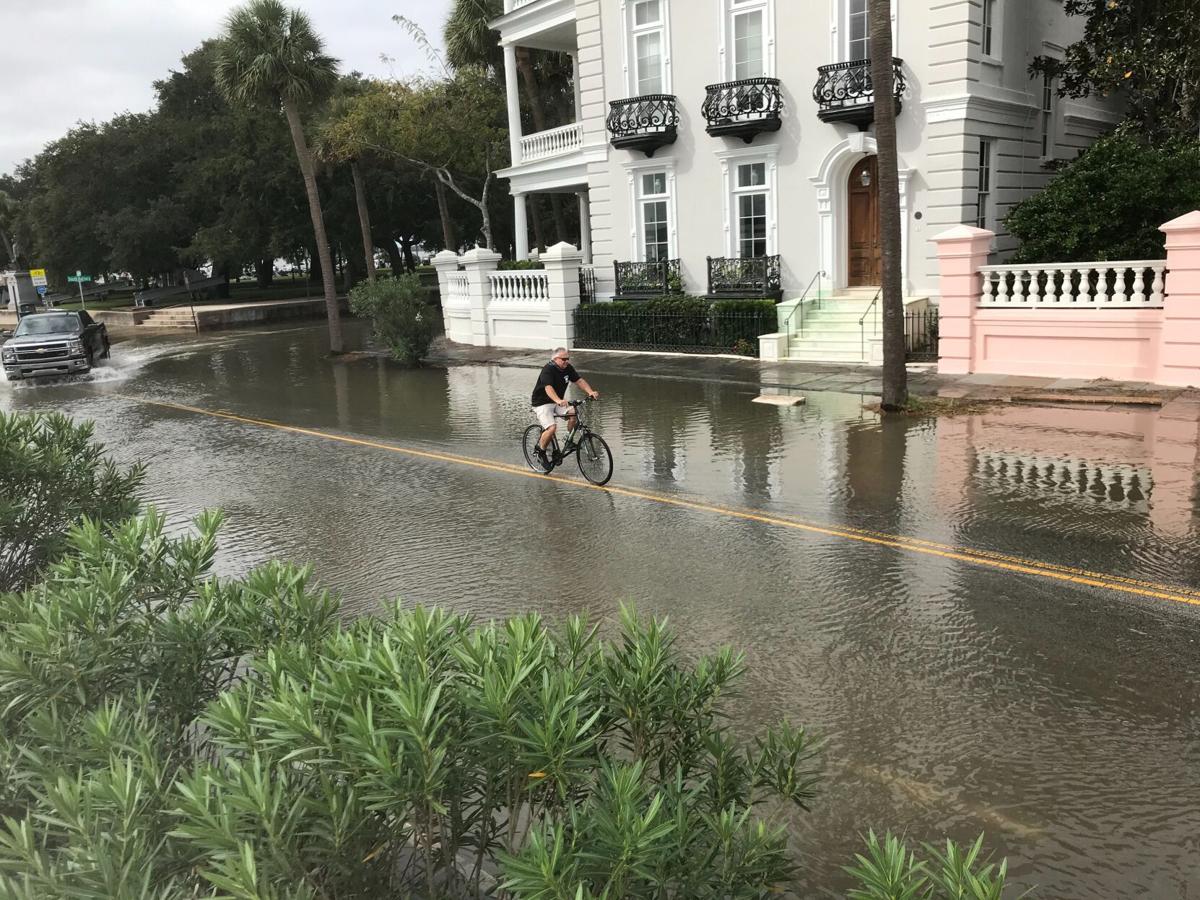 High tide floods the Battery on the morning of Sunday, Oct. 18, 2020. Glenn Smith/Staff 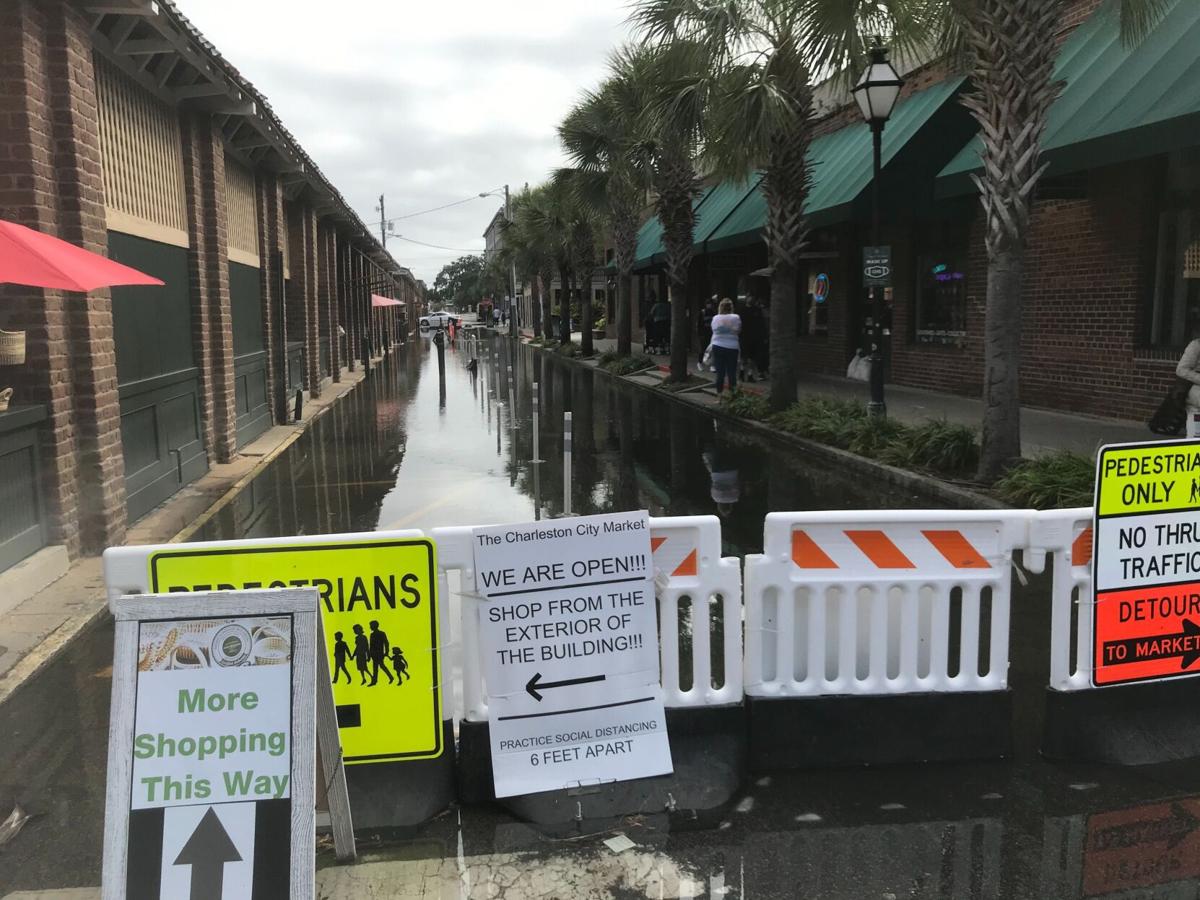 Flooding at the Charleston Market on Sunday, Oct. 18, 2020. Glenn Smith/Staff 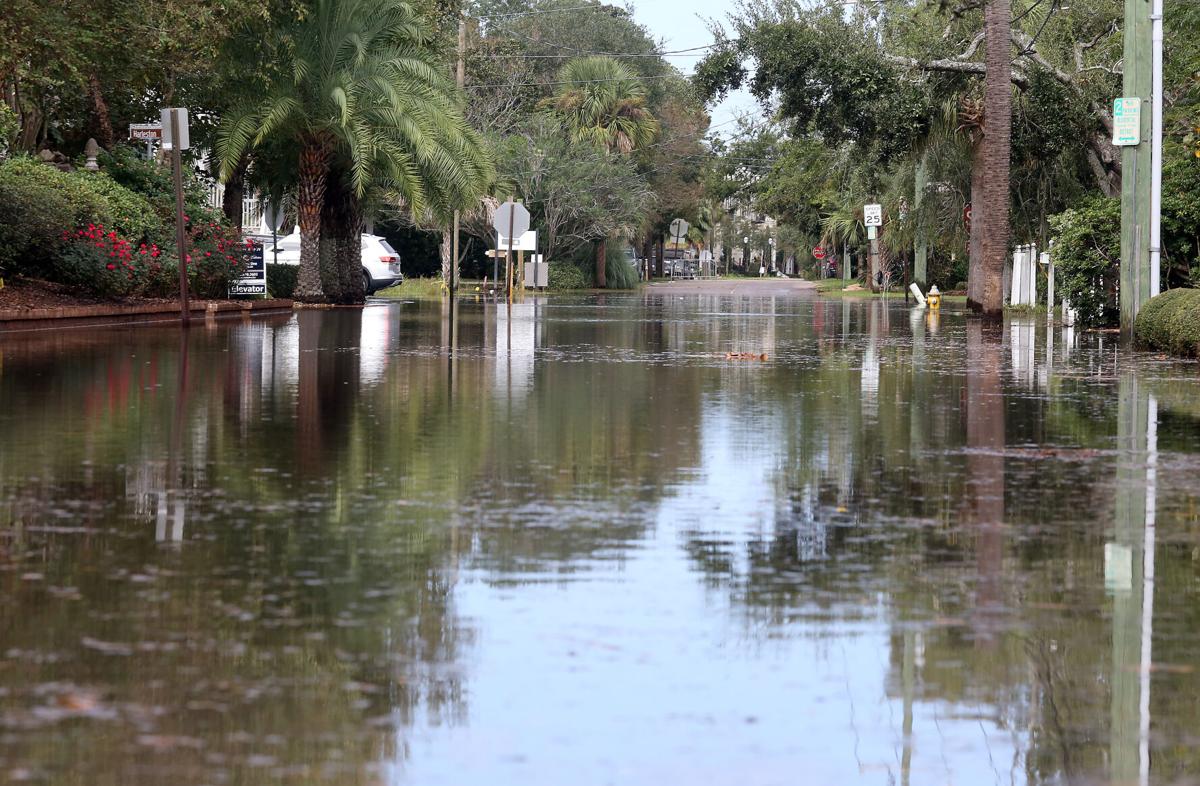 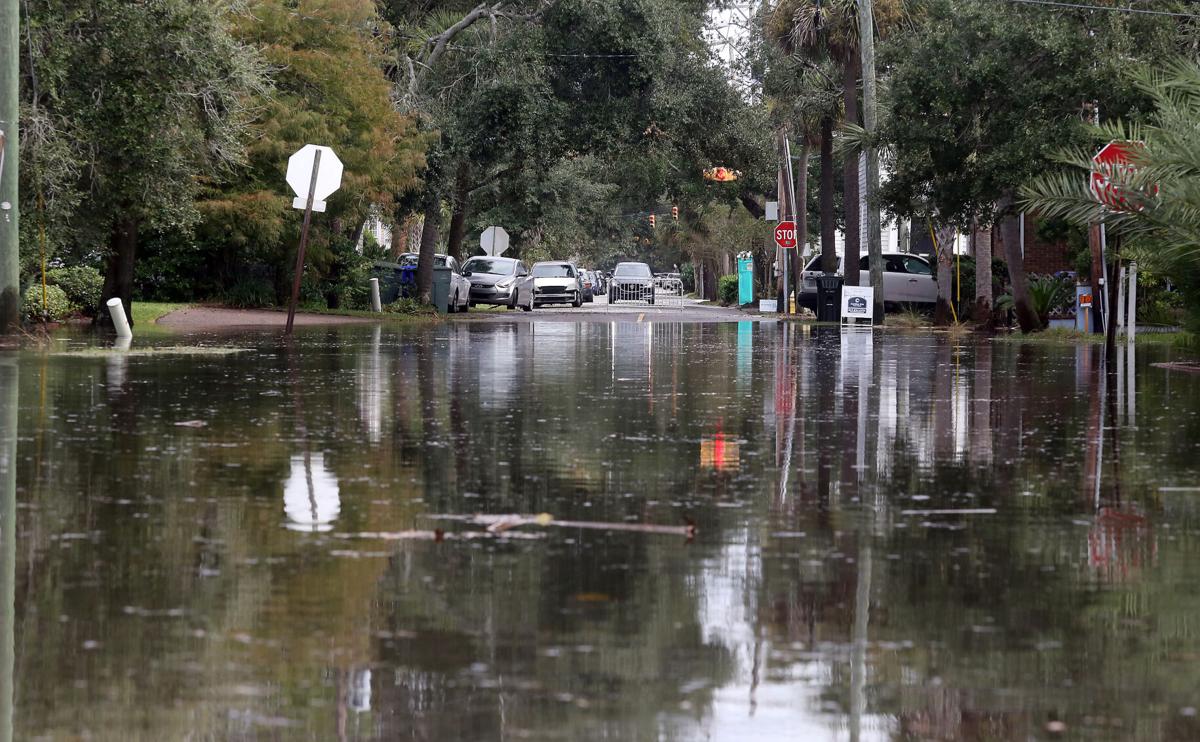 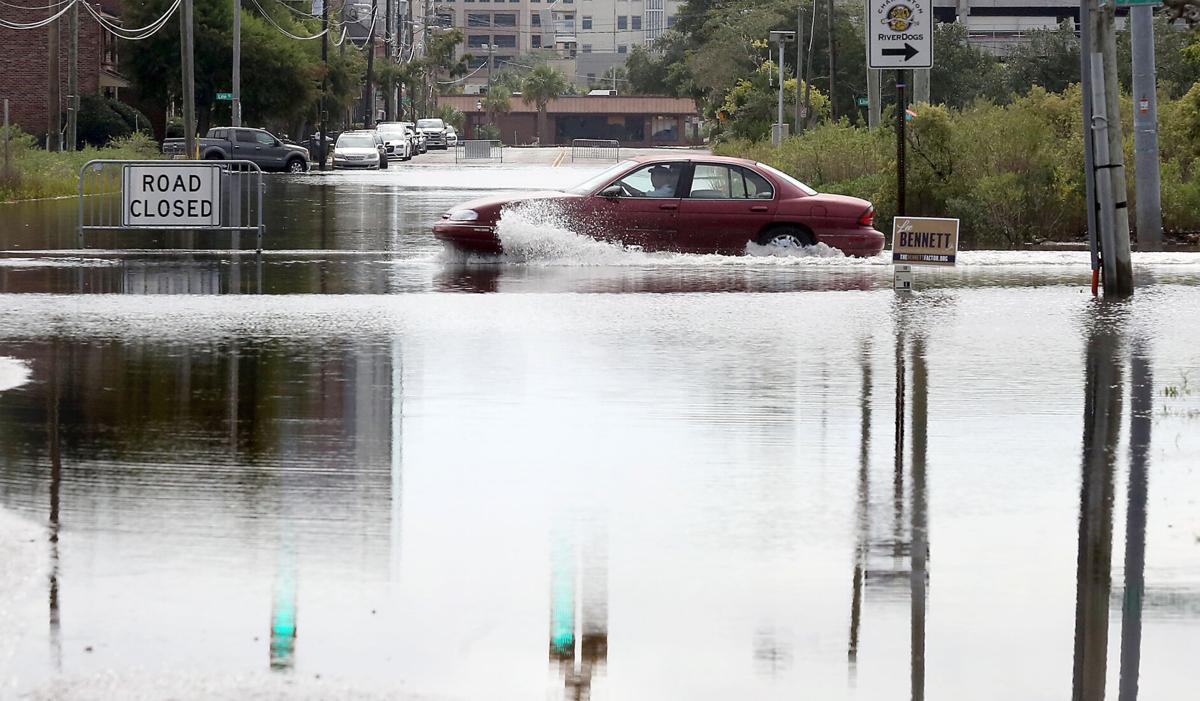 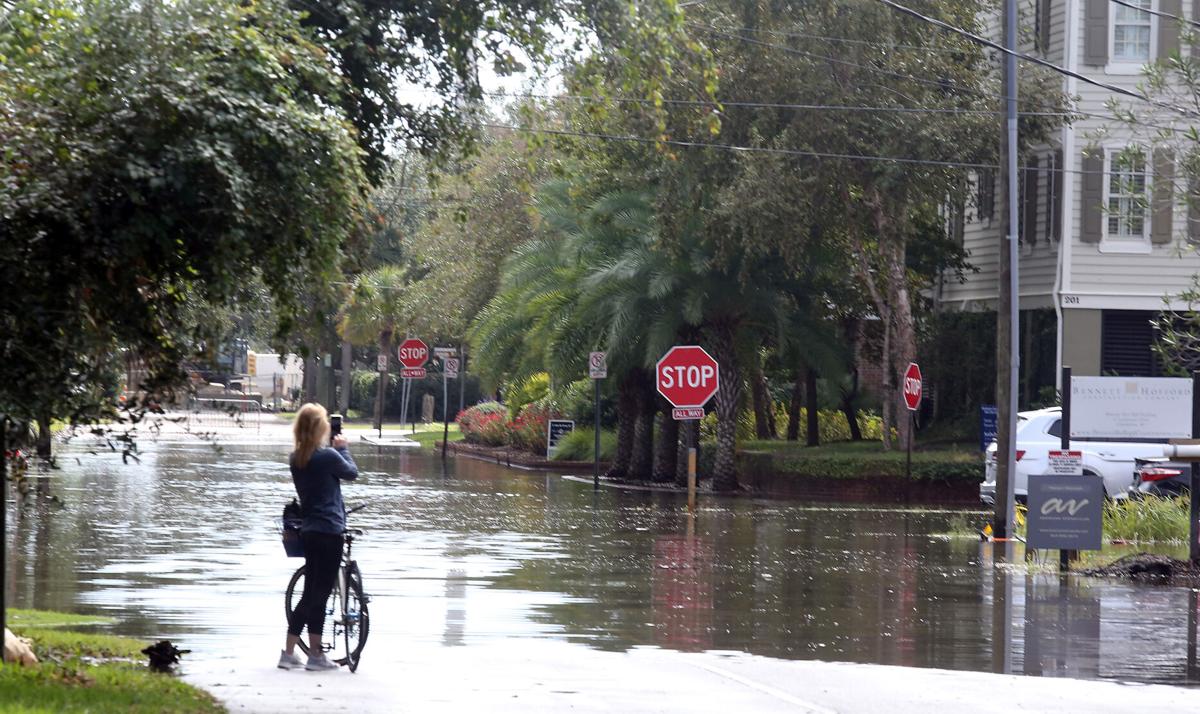 A woman takes a photo of a flooded Barre Street on Sunday, Oct. 18, 2020. Flooding in downtown Charleston was caused by a morning high tide that topped 8 feet. Brad Nettles/Staff

High tide floods the Battery on the morning of Sunday, Oct. 18, 2020. Glenn Smith/Staff

A woman takes a photo of a flooded Barre Street on Sunday, Oct. 18, 2020. Flooding in downtown Charleston was caused by a morning high tide that topped 8 feet. Brad Nettles/Staff

Flooding was more noticeable and prevalent in downtown Charleston on Sunday after the morning high tide topped 8 feet, the point at which major flooding in the city begins.

Tourists in the city Market gingerly stepped over narrow canals that formed along the vendor sheds on North Market Street to buy sweetgrass baskets and other merchandise. South Market was completely submerged, the murky water pooling and draining into the walkways between the sheds.

“What happened here?” one woman asked, looking up at the sunny sky as she skirted a flooded intersection.

Salty water from Charleston Harbor also spilled over onto East Bay Street along the High Battery, making for a soggy passage for cars and tourists alike. One man rode his bike along the road’s center line, the shallowest point, as several motorists turned around, seeking a drier route.

Along the western edge of the peninsula, the Ashley River merged once again with Lockwood Drive as the tide caused the waterway to jumps its banks. Aerial footage showed the S.C. Highway 61 ramp leading into West Ashley completely underwater and closed to traffic.

Abnormally high tides have been swamping the city for several days now. It’s common for these “king tides” to arrive in the Southeast in autumn because of the lunar cycle.

Another one is expected Monday morning, with forecasters predicting the tide will crest at about 7.8 feet. Sunday’s tide reached 8.19 feet, according to the National Weather Service gauge in Charleston Harbor.

Charleston street closures can be check at gis.charleston-sc.gov/road-closures-regional/.