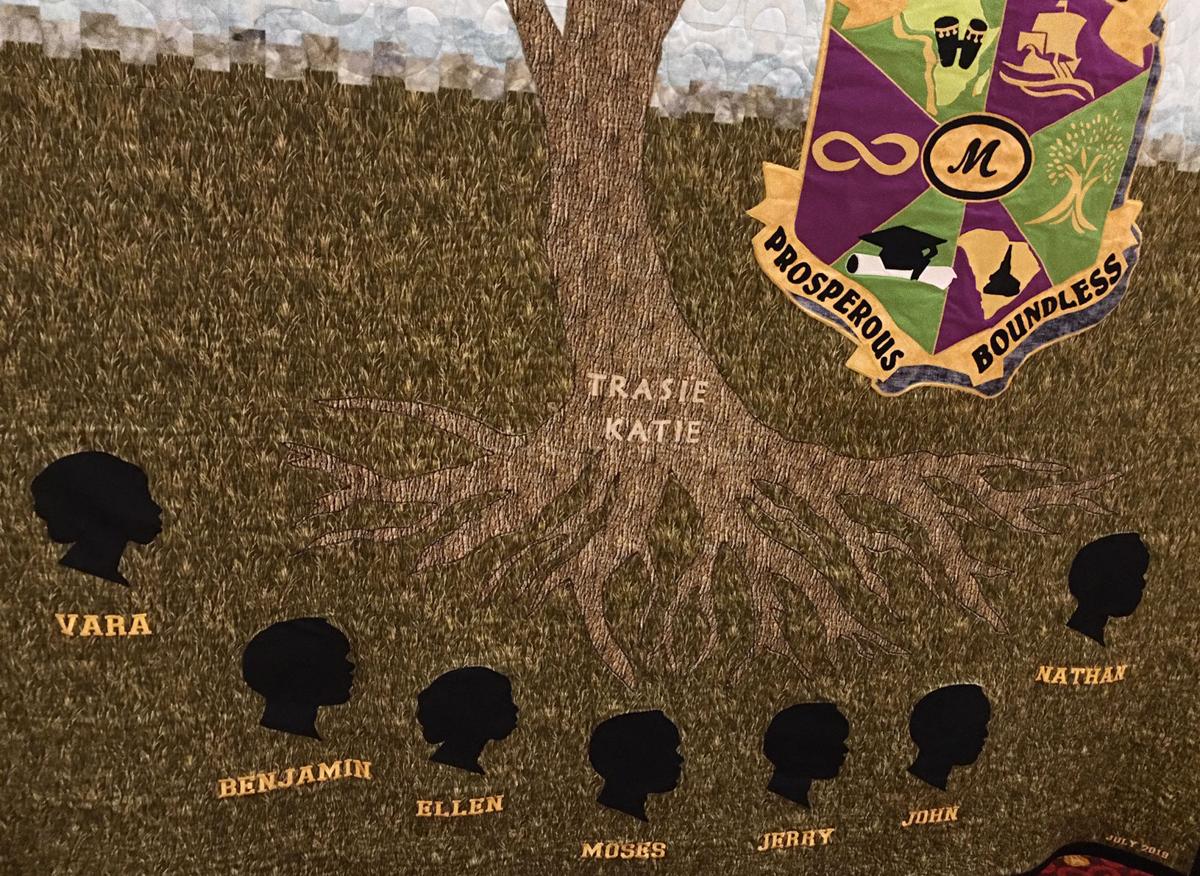 Trasie was the founding matriarch of the Martin family of Jenkinsville, north of Columbia. This quilt illustrating the family tree was presented at the 50th Martin Family reunion in 2018. Provided 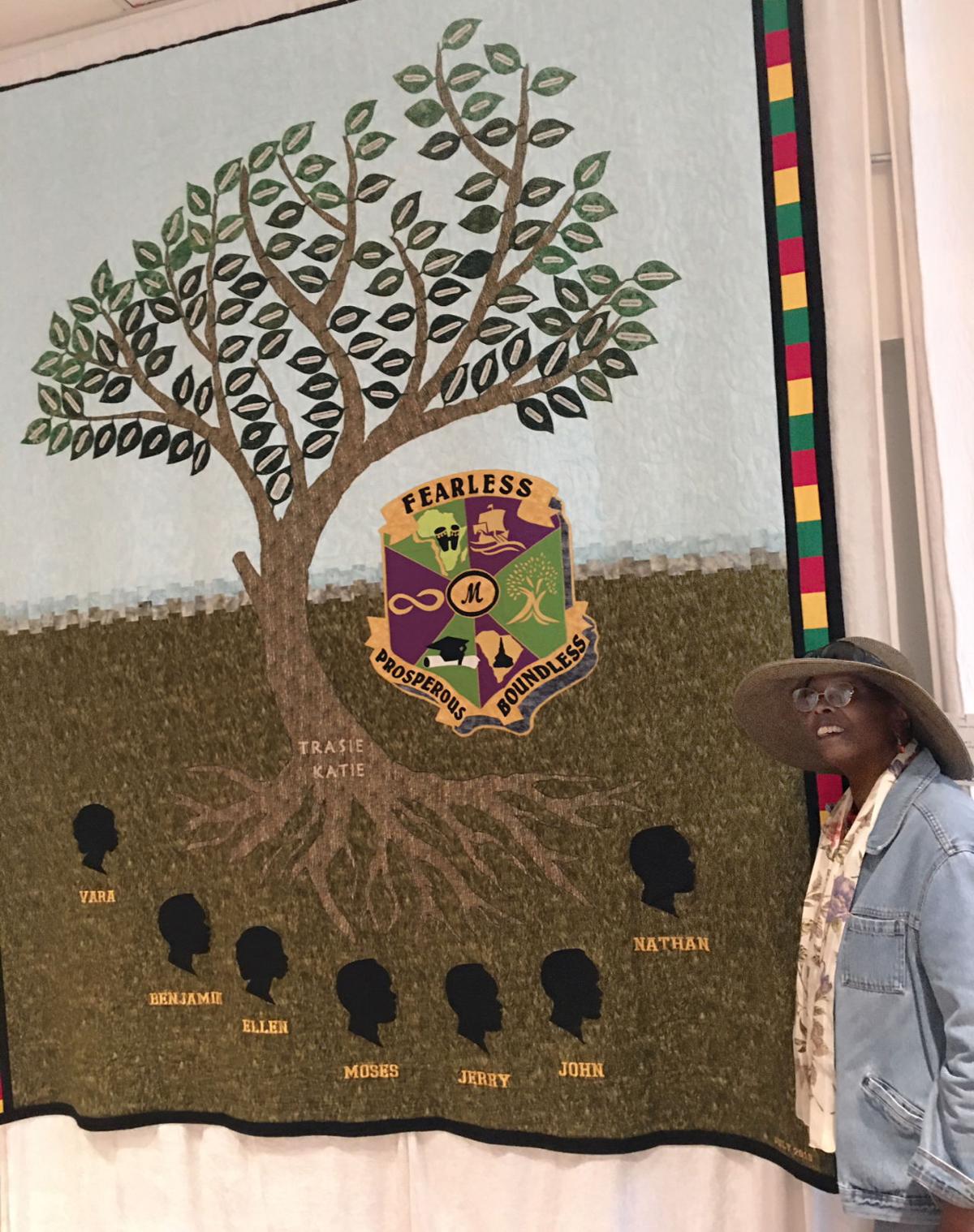 Stephanie Rose Martin-Smith of Michigan, the most recent family historian for the Martin Family, stands alongside the a quilt illustrating the Martin family tree. Martin-Smith can trace her roots back Katie's son, Benjamin. Provided. 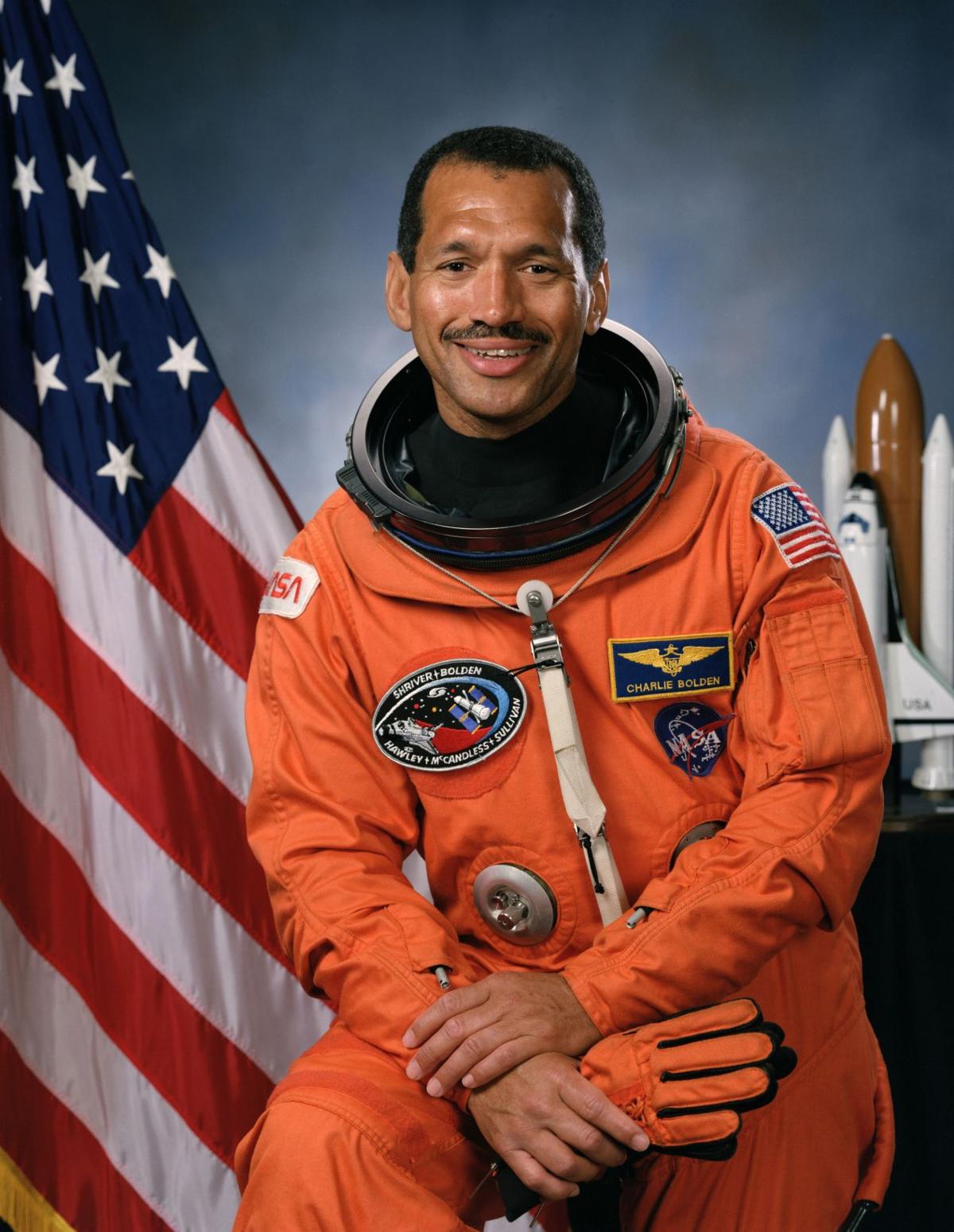 Astronaut Charles F. Bolden Jr., of Columbia, became the first African American to hold the office of NASA administrator. He is one of the most prominent members of the Martin family.  NASA/Provided 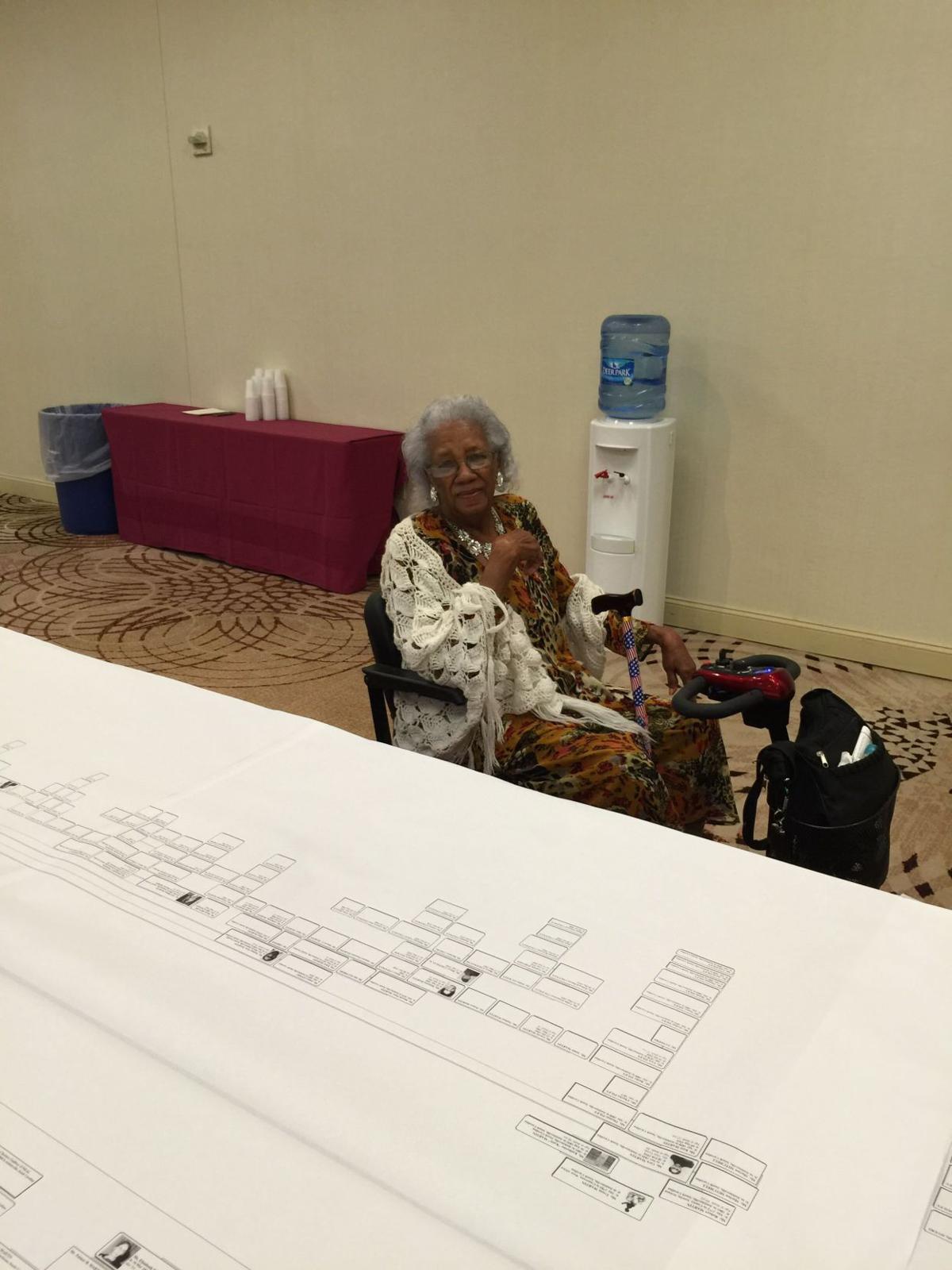 Ruby Thigpen of Connecticut reviews the Martin family tree at the annual United Martin Family Reunion. She can trace her line back to Vara, one of Katie's children. The family tree is a staple of the three-day event, where members are encouraged to find themselves, double-check names and add to it. The list of names is so vast that Martin family reserves an entire hotel ballroom just for it. Provided.

Trasie was the founding matriarch of the Martin family of Jenkinsville, north of Columbia. This quilt illustrating the family tree was presented at the 50th Martin Family reunion in 2018. Provided

Stephanie Rose Martin-Smith of Michigan, the most recent family historian for the Martin Family, stands alongside the a quilt illustrating the Martin family tree. Martin-Smith can trace her roots back Katie's son, Benjamin. Provided.

Stolen from her family and carried across the ocean, the young West African woman arrived in Charleston sometime in the 1790s in the dark bowels of a slave ship.

Shackled in chains and forced onto a strange vessel, no one knows the trauma she witnessed on her journey through the Middle Passage.

It is almost certain no one ever asked.

Her existence lingers in black ink on a bill of sale dated July 1, 1799, a lasting receipt of the day she was given an Americanized name and sold into bondage for $300.

Almost five months later, she would be sold to John Martin, a white planter from Fairfield County.

For her descendants, the bill of sale is a painful piece of proof.

It affirms Trasie as the first line in their origin story, the mother in Mother's Day, the woman who is the founding matriarch of the Martin family of Jenkinsville, north of Columbia.

At reparations forum in SC, a descendant of American slaves leaves with questions

Though little else is known about Trasie, it is her Martin family legacy that endures.

Her descendants now number more than 9,000 and span at least 11 generations. Their contributions shaped both South Carolina and the nation.

They built the first black church in Fairfield County. During Reconstruction, they served in South Carolina’s Legislature — the first in the U.S. with an African American majority.

In an iconic image of the civil rights movement, two Martins can be seen staging a sit-in at a Woolworth lunch counter in Greensboro, N.C.

One of the family’s most famous members is Charles Bolden, who not only went into space but became the first African American to lead NASA.

The first chapter of that history unfolds in Jenkinsville.

After Trasie was sold to John Martin, she gave birth to at least one child, a daughter named Katie.

That daughter later bore at least six children — Moses, John, Jerry, Ellen, Vara and Benjamin — who were fathered by John Martin's grandson, Robert Martin. She may have had a seventh child, Nathan, but his paternity is unclear from records.

Montez Martin, who hails from the Jerry line, said family members he’s spoken to throughout the years have wrestled with the family’s foundation and the painful truths it may reveal.

Among the most troubling questions is whether Trasie or Katie chose to become mothers, or whether the children they raised were conceived through acts of sexual violence.

"There are people in my family who will not acknowledge that there even was somebody named John Martin and that there was a John Martin Plantation. There are other people who would like to go find it so that they can stand there and say, ‘My ancestors came here,’” he said. "And that’s OK. Everybody can have whatever feelings they have about it."

Those mixed emotions, he said, make sense as individuals come to terms with a personal family history that began in human subjugation.

But there were advantages afforded to the Martins. Unlike other black families at the time, the Martins were not sold out of the area or to other plantations.

They were also taught to read and write, and how to manage business affairs.

Stephanie Rose Martin-Smith, of Michigan, and the most recent family historian for the Martin family, said it is not clear why Robert Martin taught her ancestors to read and write, but she said it is a point of pride for many Martins who still view education as the cornerstone of upward mobility.

"They wanted to make sure that we were able to survive on our own," Martin-Smith said.

Three years after the Civil War ended, Robert M. Martin, a descendant of the white planter John Martin, granted about 600 acres of land to Benjamin, Moses, and Jerry for $1,000 each.

With that land, the Martins began to prosper.

During Reconstruction, the Martins “wheeled and dealt” cotton and land until they owned most of the land between the Little River and Broad River. Some of that land would become the foundation for White Hall AME Church, the first black church in Fairfield County.

Bobby Donaldson, a University of South Carolina history professor who leads the school's Center for Civil Rights History and Research, said the Martins were change-makers who regularly appeared in local newspapers.

"They were part of a generation of leaders who, against considerable odds, derision, and attacks, worked to shape the political and economic foundations for African Americans as they faced the arduous transition from slavery to freedom," Donaldson said.

Donaldson said critics of Reconstruction tried and maintain the traditional white-dominated power structure. They pushed back against the majority minority legislature.

To intimidate Martin and his fellow lawmakers, a pamphlet was circulated that portrayed them as so-called "Radical Republicans" and questioned their ability to govern.

"The Martins were among an impressive cohort of African Americans who defied these demeaning and wrong-headed stereotypes," Donaldson said.

At 95, Leon Martin is the great-great-grandson of Moses Martin.

Though he never met Moses Martin, Leon Martin said he learned quickly about what he called a Martin family habit that he imagines was also present in Moses: "Trying to be independent without relying on people to prop you up."

For years, the Martin family knew little of Trasie or her daughter Katie.

Daron-Lee Calhoun II of the Avery Research Center for African American History and Culture calls it "the wall."

As a descendant of enslaved Africans himself, Calhoun said most black families struggle to find documentation that predates the 1870s.

The issue is such an obstacle that Charleston's emerging International African American Museum has made helping African Americans get around or over that wall part of its driving mission. When it opens, visitors will be able to seek advice to help them learn more about their ancestors.

Some of the struggle is due to the way records were kept at the time, when some enslaved people were enumerated rather than named. Sometimes, he said, it comes down to whether or not a slave owner kept strong records.

"For us, we have to turn over every stone to find out who we are," he said.

That the Martin family found Trasie's bill of sale is incredible, he said.

"When you find something like that, it's a gem," he said.

For Delphine Reed, she realized she needed to feel her family history when her heart tugged at her to return to Jenkinsville.

Even now, the 69-year-old resident of Superior Township, Mich., can recall the sweltering summer trip she took there as a child, and what it felt like to bathe in a barrel at her great-grandmother's home.

As a woman of faith, Reed called her April 2019 trip a pilgrimage. She was drawn to the White Hall AME church founded by her Martin family ancestors.

"Perhaps intuitively, I wanted to feel something of what it took to build something that was still standing," she said.

She stood beside the headstone of her great-grandmother, Mamie P. Young, in the family graveyard.

She sat in the pews and opened a hymnal. She played "Blessed Assurance" at the piano.

When one of her cousins heard her singing, she suggested she move to Jenkinsville.

"Truthfully, when she asked, I felt an actual warfare inside of me," Reed said. "I knew I wasn't going to move down there, but at the same time, there was a sense of allegiance, like should I?"