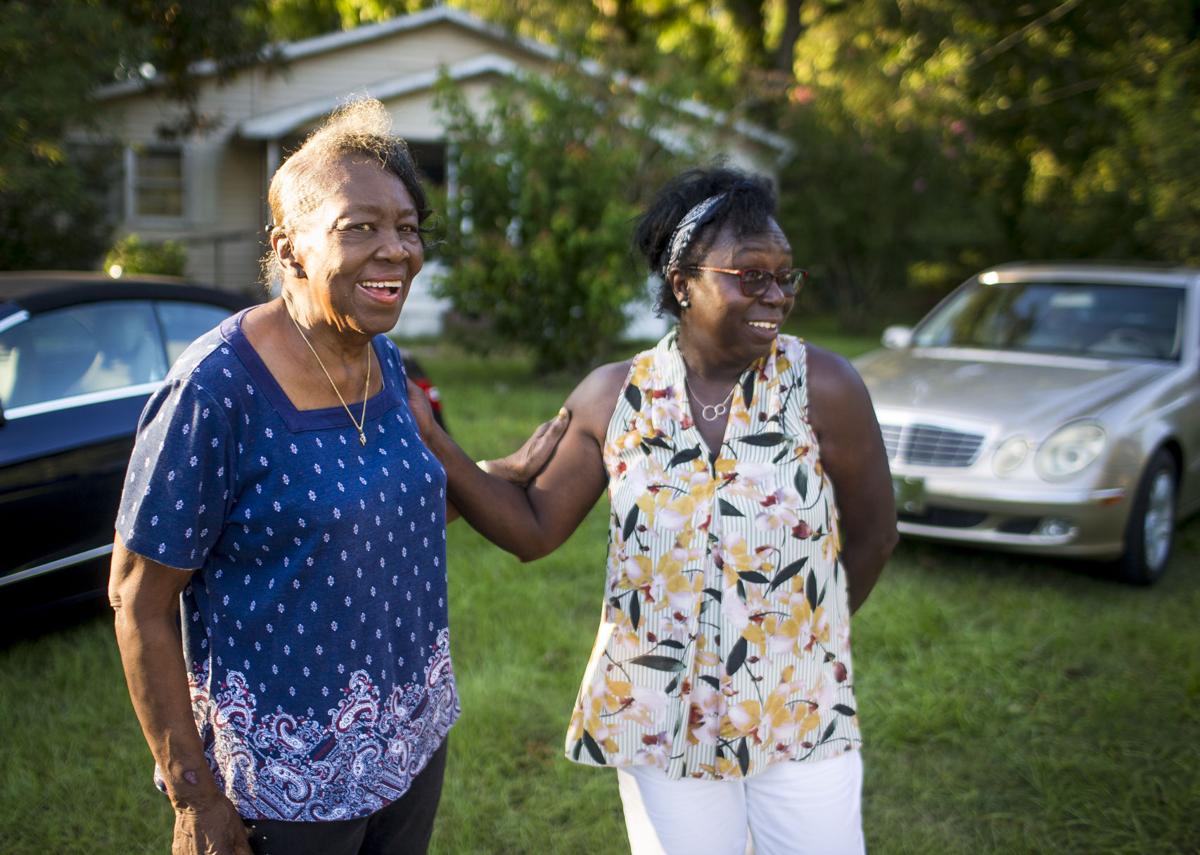 Emma Williams (left), whose husband is a descendant of Cain Bryan, talks with Terry Williams, who with her husband Derrick is developing a tennis club on the East Cooper land Bryan bought in 1875. Emma and her husband Pete Williams lived on the property, in the house in the background where Pete grew up. Thursday, Sept. 12, 2019. Andrew J. Whitaker/Staff 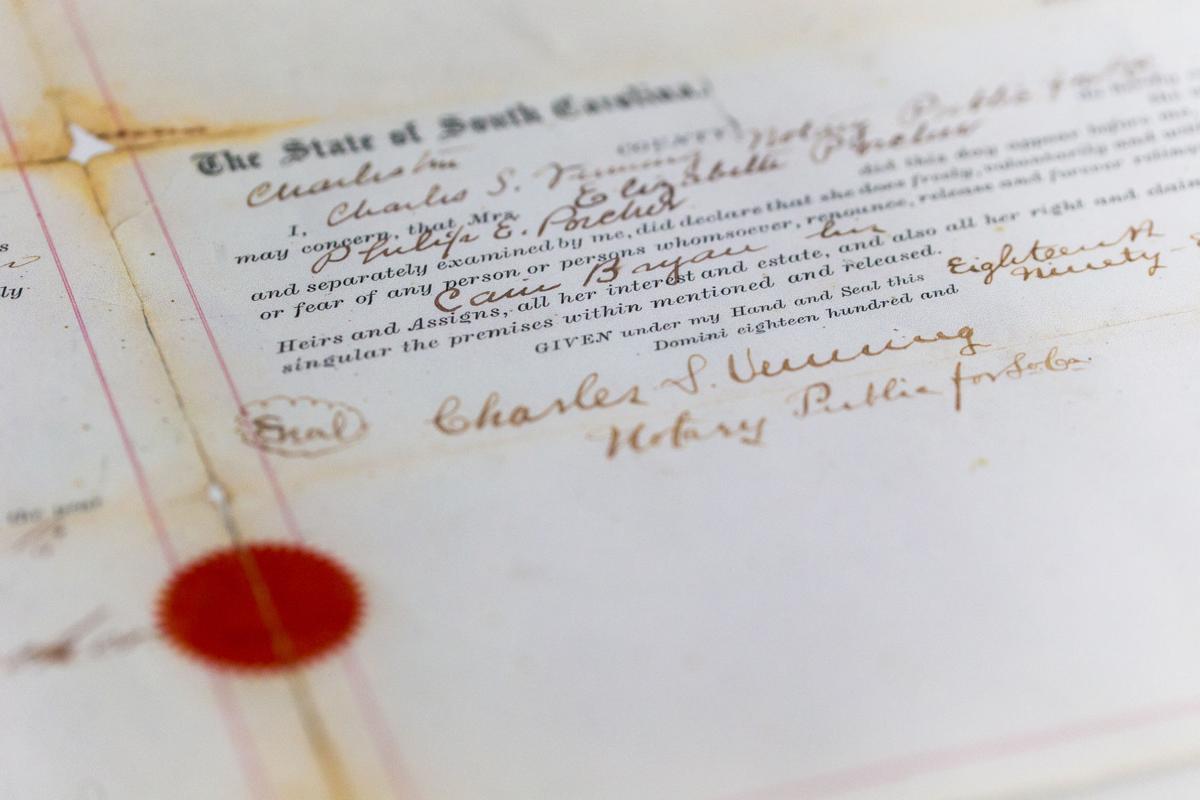 A copy of the original property deed for land purchased by Cain Bryan, on second day of January of 1875 in Charleston County. Andrew J. Whitaker/Staff 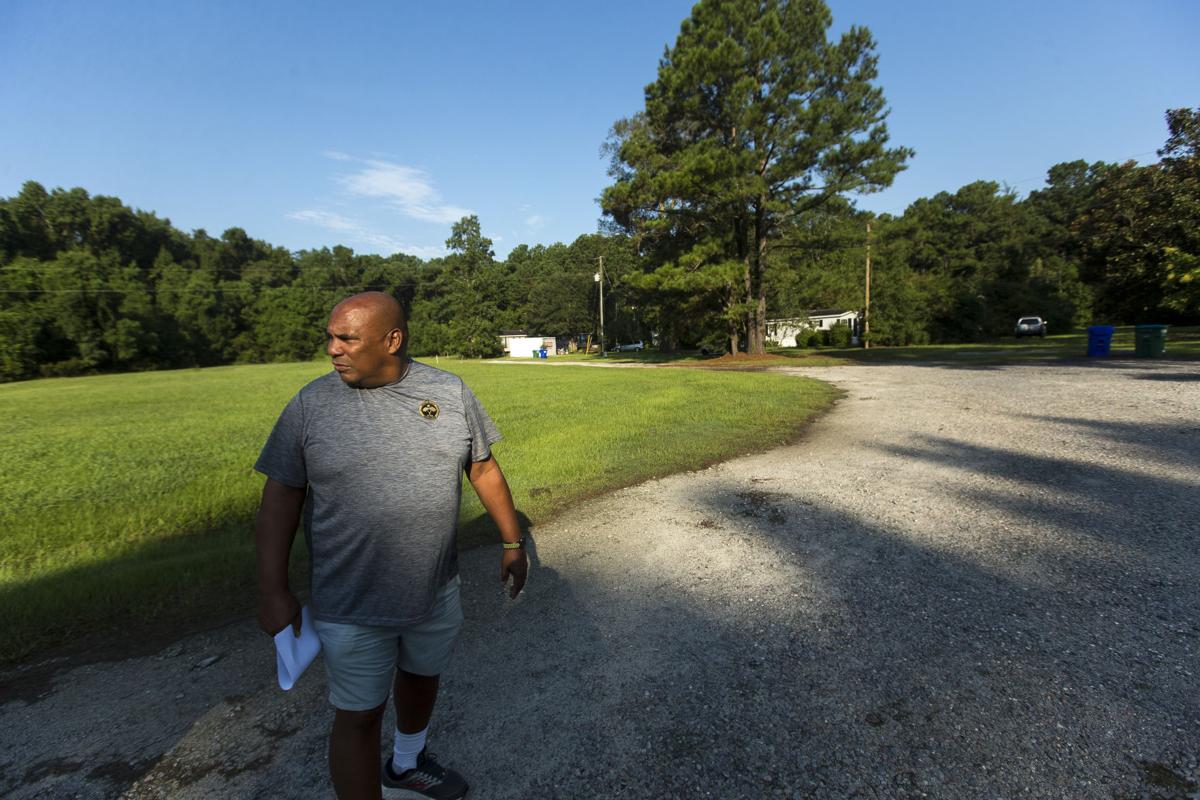 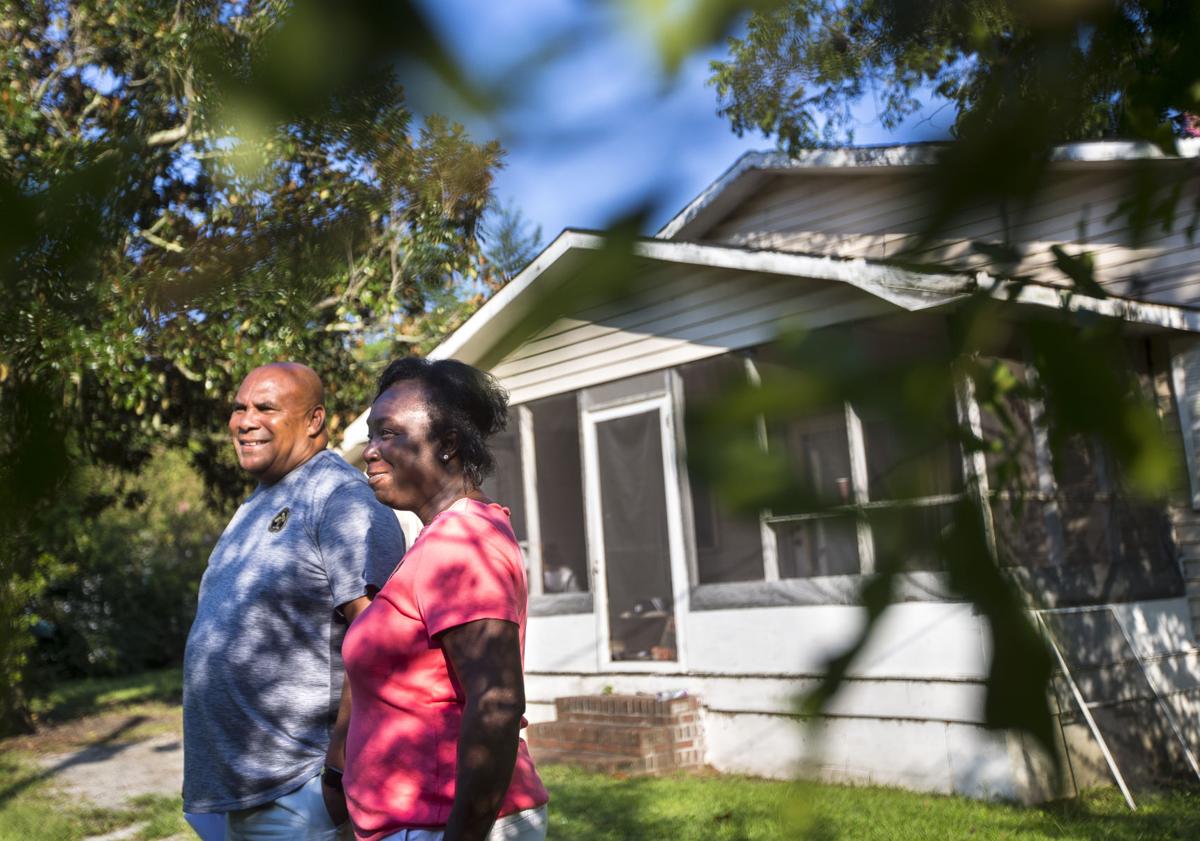 "It's not your typical buyer and seller relationship. We have dinner with them and pray with them." Derrick Williams said with his wife Terry Williams about the family they became close with after purchasing the heirs property land where the Mount Pleasant Racquet Club is planned. Andrew J. Whitaker/Staff 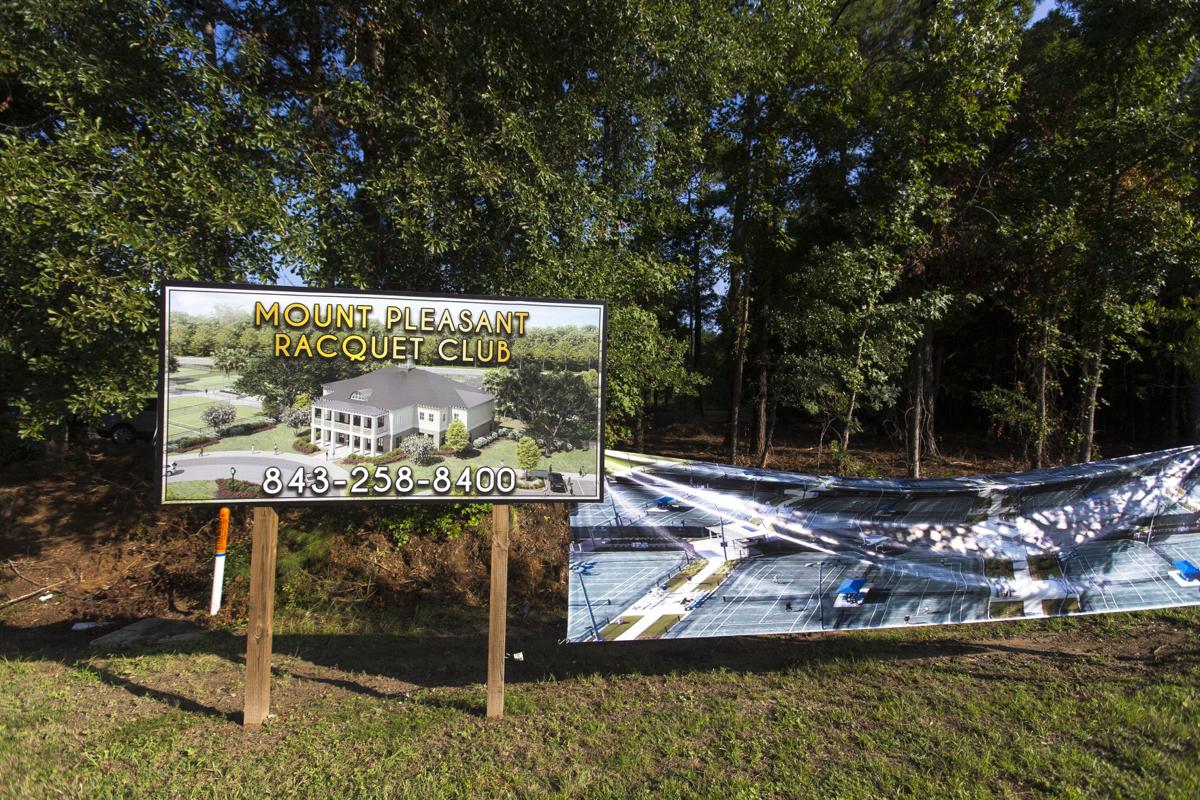 The Mount Pleasant Racquet Club is planned to open around next summer. Andrew J. Whitaker/Staff 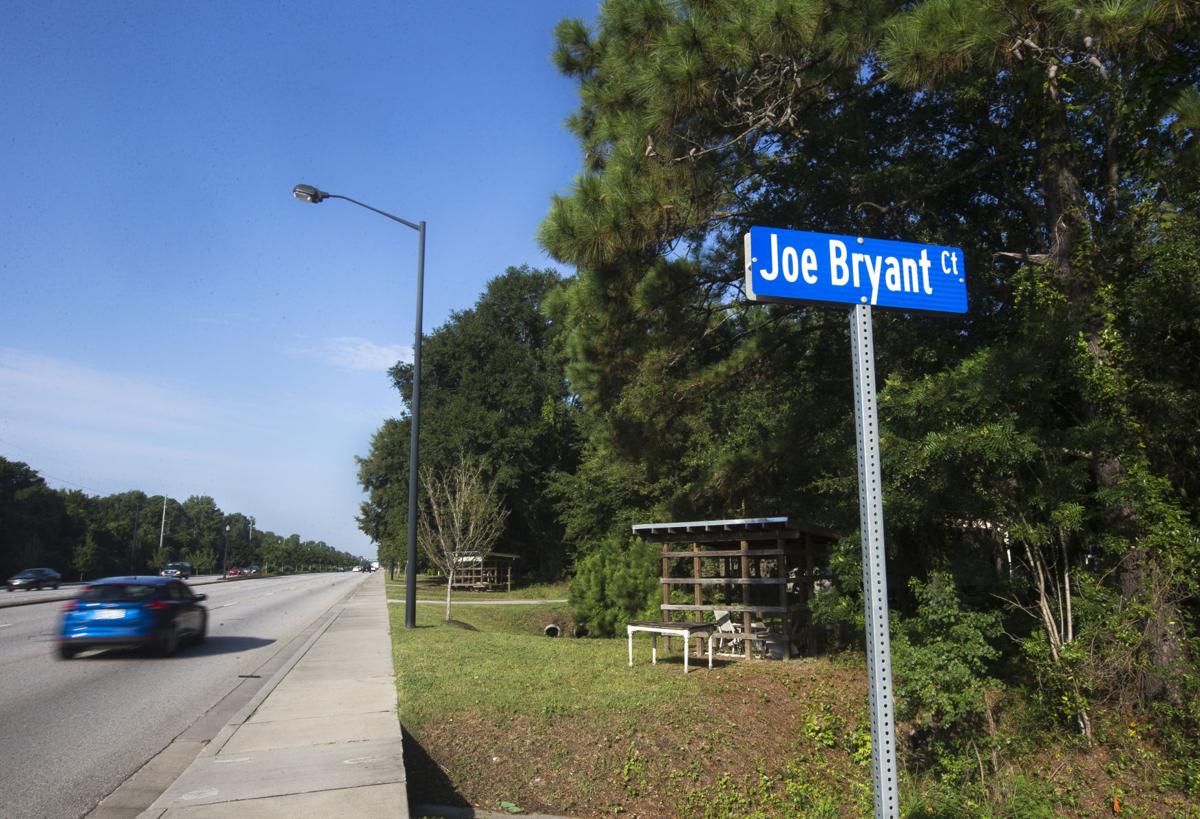 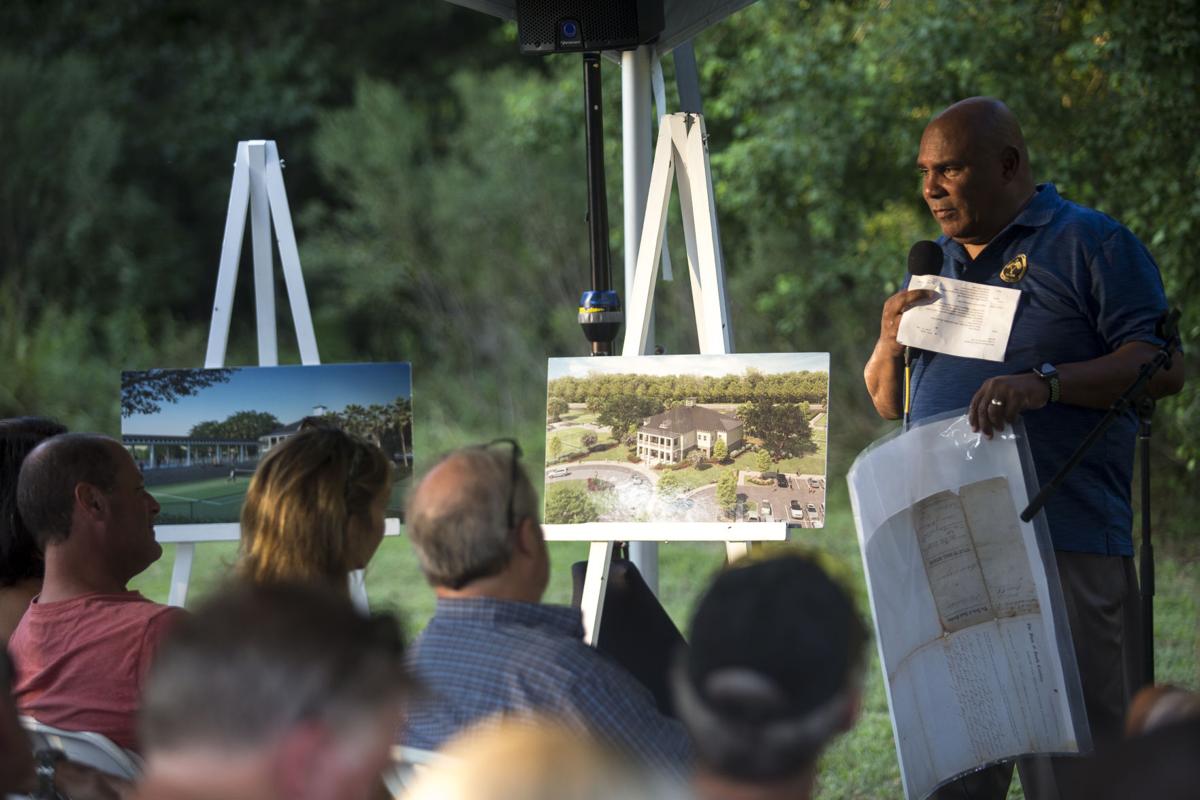 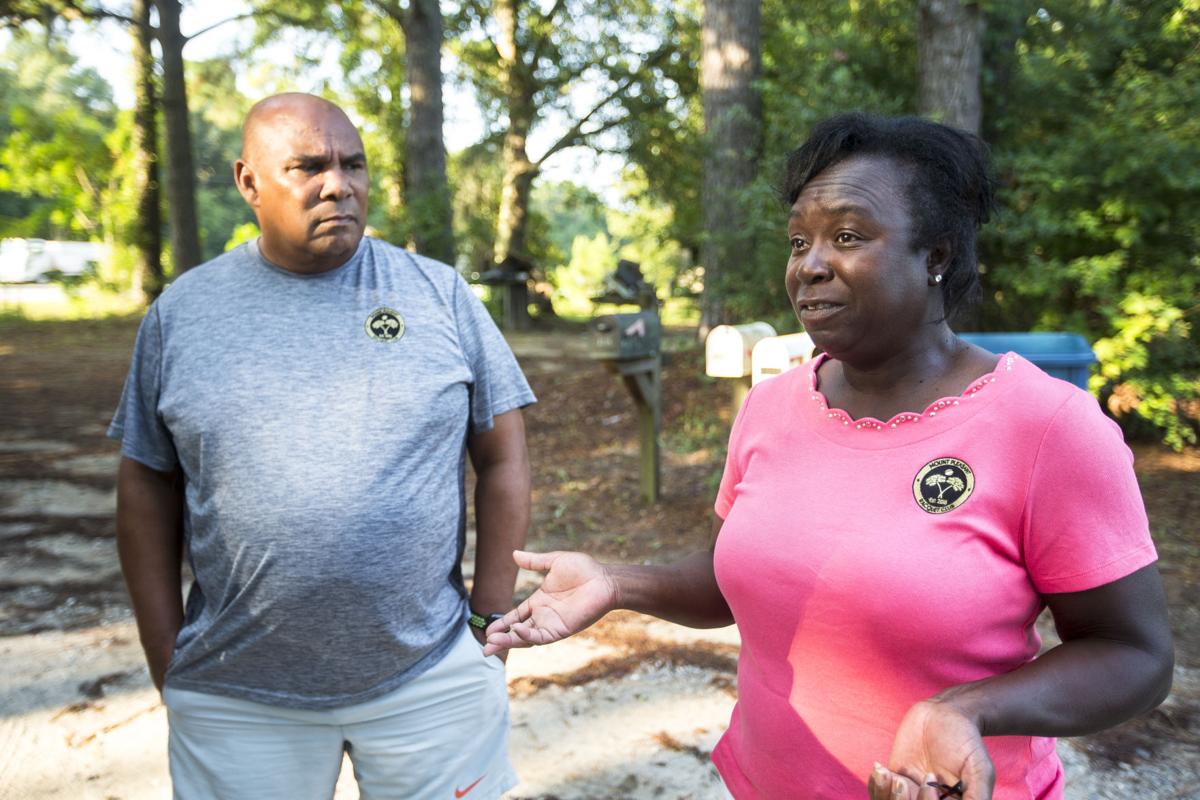 Derrick and Terry Williams finalized their purchase of 15 acres of heirs property on June 28 after about a year of waiting to be finalized for The Mount Pleasant Racquet Club. Andrew J. Whitaker/Staff

Emma Williams (left), whose husband is a descendant of Cain Bryan, talks with Terry Williams, who with her husband Derrick is developing a tennis club on the East Cooper land Bryan bought in 1875. Emma and her husband Pete Williams lived on the property, in the house in the background where Pete grew up. Thursday, Sept. 12, 2019. Andrew J. Whitaker/Staff

The Mount Pleasant Racquet Club is planned to open around next summer. Andrew J. Whitaker/Staff

Derrick and Terry Williams finalized their purchase of 15 acres of heirs property on June 28 after about a year of waiting to be finalized for The Mount Pleasant Racquet Club. Andrew J. Whitaker/Staff

This is not one of those tales.

It begins in February 1875, less than a decade after the end of the Civil War, when Cain Bryan bought 20 acres to farm and homestead in the East Cooper area. He paid $240 — the equivalent of $5,600 in today's dollars.

The nearest town, Mount Pleasant, was a tiny village then with fewer than 800 residents. Travel to the City of Charleston required a boat.

It was a time when black land ownership soared east of the Cooper River, and communities such as Scanlonville, Snowden, Phillips and Four Mile were established by residents who, in most cases, had previously been enslaved.

This year in July, the many descendants of Bryan sold 14 acres along U.S. Highway 17 that remained from his original purchase. The property is a raft of rural land in a sea of suburbia —and contains just a few modest homes and a sweetgrass basket stand.

"It was all farms," said Betty Manigault, 77, who grew up there and is among Bryan's great-great-grandchildren.

"We used to go over there and pick cotton and pears," she said, pointing across what was once two-lane Highway 17, at land that is now home to a KOA Campground, the Charleston Fun Park, and Charleston National golf course subdivision.

Development is also what the future holds for the Cain Bryan estate, in the form of an upscale tennis club planned by buyers Derrick and Terry Williams.

"This is going to be the middle of Mount Pleasant in about a minute," Derrick Williams said of the location. "We drove by one day and saw a sign that was sort of half-fallen down that said 'for sale'."

It was a sale that Bryan's heirs had willingly sought. First, it took years of research and court rulings to determine who all the heirs were — all 144 of them — because Bryan and 42 of his descendants had died without leaving wills.

“A number of the heirs got together, determined to begin the process," said lawyer John Dodds III, who represented the heirs and who went to court to clear the title to the land. “They did a really good job of locating records of lineage, kept in Bibles for generations."

“We’d meet and there would be 30 or 40 people, representing various wings of the family," he said.

As development races ahead, so do efforts to save African-American settlement communities

The many heirs all had varying fractions of ownership in the shared property, too many shares to divide up the land itself. Instead, they divided up the proceeds from the $6.695 million sale, in an example of heirs' property owners overcoming substantial obstacles to sell land on their terms.

"You should have seen the stack of checks," said Emma Williams, who lived in a house on the Bryan property since 1971 when she married Pete Williams, a Bryan heir who grew up there.

Her husband — Mr. Pete, most people call him — is by several accounts the heir who made sure the property taxes got paid and the grass got mowed.

"He told me that when he was young his mother told him: 'pay the taxes until you die'," said Emma Williams, who is not related to Terry and Derrick Williams.

The sale allowed the Emma and Pete, both 80, to buy a house of their own for the first time.

"I was so excited," Emma Williams said. "I loved the (previous) location, but it was time to move on."

With heirs' property, moving on is typically much easier said than done. Without wills or other records of the changes in ownership, properties end up being owned by dozens or even hundreds of people whose names don't appear on the deed.

To sell such a property, all the owners must be identified — some may be distant relatives who have never seen the land or even set foot in South Carolina — and often a multi-year legal process must be satisfied to determine who owns what percentage of the land.

Terry Williams, one of the buyers of the Cain Bryan estate, knows this well. She's a Charleston native who grew up on the peninsula, on Jasper Street, and said her family also had owned heirs property east of the Cooper River.

The couple were not the first potential buyers of the Cain Bryan land, which had been listed for sale since 2010. Pulte Homes had a court-approved contract to buy the three main parcels for $3.36 million in 2015, but that fell through, followed by a contract with Adams Property Group for a higher amount, which also fell through. The deal with the Williams' Mount Pleasant Racquet Club emerged after that.

"It was very odd for them to see a black man come in and make an offer on the property," said Derrick Williams. "I'm from New England, and my accent didn't help."

Williams grew up in Boston but he has been in the Charleston area since before Hurricane Hugo. He owns Centre Court Tennis Pro Shop in Mount Pleasant, and was the city of Charleston’s director of special facilities from 1987-93.

As negotiations went on, there were meetings, often with dozens of the family members representing different groups of the heirs.

"They sat and prayed with us," Derrick said.

Between the time when the Pulte deal fell through and the Mount Pleasant Racquet Club's purchase, the list of heirs of Cain Bryan changed several times as some heirs passed away and other took their place. By the time the deal was done, there were 144 — one for every year since Bryan bought the land.

Derrick Williams said when he walked out of the closing for the property purchase, "there was a line of people, out to the street, waiting for their checks."

He describes himself now as a caretaker of the property, and said that he and his wife plan to commemorate the Cain Bryan heirs' long history on the land.

"We want to spend time with them, for as long as we're on this earth," Terry Williams said.

It’s no surprise a posh tennis club is planned along U.S. Highway 17 in Mount Pleasant on 14 acres across from the Charleston Fun Park and a K…