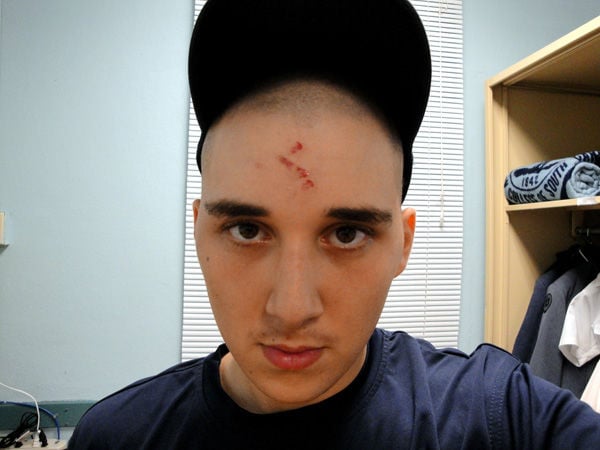 Former Citadel cadet Christopher Kibbee said this photograph was taken in the fall of 2009 soon after an upperclass cadet repeatedly drove an unsharpened pencil into his forehead, a move that sent him to the infirmary. 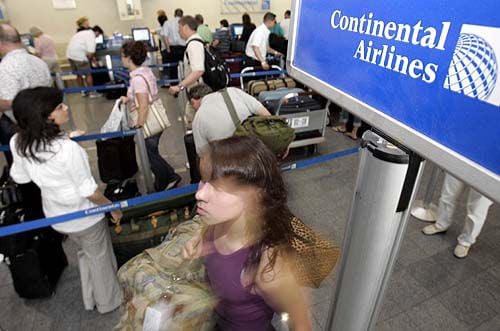 Continental Airlines announced Thursday that it will eliminate the only nonstop flight from Charleston International Airport to Cleveland, beginning in September. The airline is matching its competition to cut expenses by reducing seat capacity.

Former Citadel cadet Christopher Kibbee said this photograph was taken in the fall of 2009 soon after an upperclass cadet repeatedly drove an unsharpened pencil into his forehead, a move that sent him to the infirmary.

Continental Airlines announced Thursday that it will eliminate the only nonstop flight from Charleston International Airport to Cleveland, beginning in September. The airline is matching its competition to cut expenses by reducing seat capacity.

Christopher Kibbee expected The Citadel to be tough.

He didn't expect abuse, harassment and hazing from older cadets who held leadership positions, or the other knobs who were trying to emulate them. That's what the 20-year-old from Saegertown, Pa., said he got when he enrolled at the state's military college in 2009.

Kibbee, who left The Citadel after one semester, said upperclass cadets told him to jump off the top floor of the barracks (which he didn't do), denied him meals, threatened to cut him, trashed his room and glued the pages of his Bible together.

Physical hazing of first-year students, known as knobs for their extremely short haircuts, has been entrenched at The Citadel for decades. The school has made strong efforts to stop hazing among the Corps in recent years, requiring all cadets to take classes on proper behavior.

But Kibbee and some other former cadets question how well those efforts are working.

On one occasion, Kibbee said, an upperclass cadet repeatedly drove an unsharpened pencil into his forehead, a move that sent him to the infirmary and left scrapes and marks. 'People have asked me why I didn't do anything,' Kibbee said. 'I was just shell-shocked.'

He said he had panic attacks and nightmares for months after leaving the school.

Some former cadets and their parents started talking among themselves about troubling incidents at the school after a story ran in The Post and Courier in March about Kelsey Upton, a Georgia high school student.

website next to a photo of a naked woman who resembled her. The cadet's action was not a crime. Kelsey and her father are working to change that and educate others about repercussions of such actions.

Kelsey's father, Randy Upton, a federal investigator who formerly worked for the Georgia Bureau of Investigation, said he received many disturbing calls from former cadets and parents after his daughter's story was published. He helped them get in touch with each other. Those calls included Kibbee's assault with the pencil, and separate accusations of a sword being dragged across a knob's face and another knob regularly being hit with a broom and a rifle butt.

The families engaged in those conversations, some of whom said they were afraid to speak publicly for fear of retribution or consequences in their personal and professional lives, said they think certain students are singled out for harassment.

Col. Leo Mercado, The Citadel's commandant of cadets, said the cadet accused of driving the pencil into Kibbee's forehead was suspended for the remainder of the semester in which the incident happened, and an additional semester.

Hazing is not tolerated at the military college, Mercado said. All reported allegations are thoroughly investigated and handled through the school's disciplinary process.

He also said all freshmen cadets sign a 'Statement Requirement to Report Hazing' form when they enroll, and they are required to keep the definitions of hazing and sexual harassment under the clear plastic of their desk blotters.

The college keeps track of reported cases of hazing,

Mercado said. Eighteen cases have been reported over the past three years: three in the 2008-2009 school year, 12 in the 2009-2010 school year, and three last year. Twenty-eight cadets were involved in those cases.

Mercado told a sophomore class soon after he began his job as commandant in 2009 that tradition is important at The Citadel: 'But some of the things you think are traditions are just bad habits, and most of those bad habits are abuse.' He didn't cite specific examples, but said, 'I'm talking about buffoonery and jackassery.'

Some former cadets and their parents, however, say hazing and abuse continue at the school. They attributed that, at least in part, to insufficient staff supervision, especially in the barracks. The school gives older cadets power over

knobs in an effort to teach leadership skills. It also should be responsible for ensuring knobs' safety, they said.

Mercado this week said that the school provides staff supervision of the Corps of Cadets. Each battalion of about 425 cadets and each company of about 100 has a designated tactical officer, he said. And a staff officer is available in the barracks nearly 24 hours a day.

He also said cadet leaders are available, and that those leaders are reliable. 'They are the good ones. They are hand-picked,' he said. 'We have rules and regulations that govern leaders' conduct' and there are consequences for poor conduct.

Tyler Phillips, 22, of Covington, Ga., attended The Citadel in the 2009-2010 school year. His dream was to have a career as a Navy officer. He performed well in high school, participated in the Navy Sea Cadets program — where he earned awards and honors — and he earned a Navy scholarship to attend The Citadel, for which he was recommended by U.S. Rep. Jim Marshall.

Phillips said he suspects he was singled out by some upperclass cadets for abuse because he refused to haze other cadets, which he thinks is part of the culture of the school, and because he joined the school's cheerleading squad.

On many occasions, he said, upperclassmen would come in his room while he was studying, tell him to turn around and close his eyes. Then, they would hit him with a broom or rifle butt. 'It happened a lot,' Phillips said. 'I couldn't put a number on it.'

Phillips also said some knobs often haze and abuse fellow knobs. He thinks that's because upperclass cadets put them up to it, and the knobs want to gain favor with them.

Phillips said he was spit on, kicked in the back, and an upperclass cadet told him he would light him on fire.

The harassment was constant, he said. They called him 'faggot'

for being part of the cheerleading squad; some of his books disappeared from his room; and other books and some notes were burned.

When Phillips was injured and ill, those same cadets belittled him for seeking medical attention in the infirmary, he said.

Phillips said his grades plunged because of the constant abuse and harassment he suffered. He couldn't find a safe and quiet place to study.

He and his parents, Donna and Tony Phillips, contacted Marshall, their Georgia congressman, about Tyler's experience at The Citadel. The case was transferred to U.S. Sen. Saxby Chambliss when Marshall wasn't re-elected. Chambliss in turn contacted the Navy. Officials with the Navy investigated and found Phillips was a victim of hazing at the school.

The Citadel's John Carter, a professor in the Department of Health, Exercise & Sport Science and the school's ombudsman at the time, gave Phillips a letter of recommendation after Phillips left the school.

In that letter, Carter stated that Phillips' academic problems were 'directly related to being the victim of mistreatment and harassment by a group of immature and misguided cadets at our school.'

Phillips said he has suffered emotional problems since leaving the school. He became withdrawn and angry. 'Little things set me off,' he said. And he continues to have sleep problems, nightmares and anxiety.

He's still working through some of the problems brought on by his experiences, he said, but his condition is improving. 'I'm not 100 percent, but I'm getting better.'

Mercado said six cadets were brought before a disciplinary board for allegations of hazing Phillips. They all were punished.

Three of them were given 60 demerits, 120 tours and were transferred to different battalions.

Those consequences are serious, Mercado said. Cadets can only accumulate a certain number of demerits before the college undertakes a review to determine whether the student is suitable to continue as a cadet. Each tour requires a student to march for 50 minutes carrying an 8-pound rifle.

The three other cadets got 40 demerits and 80 tours.

Stephen Schlegel, 20, enrolled at The Citadel in the fall of 2009 and hoped to eventually becom

e an Army officer. But he left less than a month later after a senior allegedly dragged a sword across his face, telling him he needed a shave, he said. The incident, which didn't cause Schlegel any physical harm, was reported on an El Paso, Texas, TV station's website at the time.

Mercado said the school investigated Schlegel's claim, but two other cadets who witnessed the incident provided written statements that the accused cadet didn't drag a sword across Schlegel's face.

Schlegel said he thinks he was singled out after he went to the infirmary with a knee problem. He suspects cadet leaders thought he was malingering.

Schlegel enlisted in the Army soon after he left The Citadel.

Basic training in the Army was tough, he said, but what he was ordered to do had a purpose.

At The Citadel, he said, the prevailing attitude was, 'This is what was done to us, so we are going to do it to you.'

And their children told them that they were afraid to report incidents to the few tactical officers on duty for fear they would suffer retaliation from certain cadets.

The Phillipses said they saw a dramatic change in their son after he enrolled at The Citadel.

At winter break, Tyler wasn't himself, they said.

They knew his grades had plummeted. He had lost weight and didn't look healthy. He seemed unhappy, hostile even, and he was aloof. And he wouldn't tell them what was going on.

Debby Kibbee thought being accepted at The Citadel meant her son's dream of a successful military career was going to come true.

Christopher encountered many good cadets and helpful staff members at the school, she said. But a handful of abusive cadets ruined his experience.

Citadel President Lt. Gen. John Rosa told parents on matriculation day that as the tough knob year rolls along, their sons and daughters might call them telling them they want to come home,

Rosa told parents that wasn't unusual. They should listen to their sons and daughters, but they should encourage cadets to stick it out, she said.

So when her son told her at Parents' Weekend in October that he wanted to leave, she encouraged him to stay.

When she found out later in the semester the extent of what her son had gone through, 'I was just sick,' she said. 'It makes me sick and it makes me angry.'

Citadel definition of hazing from The Fourth Class Manual, known as 'the red book':

Hazing is a violation of South Carolina law and Citadel regulations and is punishable by expulsion from The Citadel.

Hazing is defined as wrongful striking, an unauthorized laying hand upon, threatening with violence, or offering bodily harm by any student, or any other unauthorized treatment by one student toward another student of tyrannical, abusive, shameful, insulting or humiliating nature; or otherwise requiring any student to perform any personal service for another student except as specifically provided for cadets in the Fourth Class System or Cadet Regulations. Fourth class cadets may report hazing to anybody within or outside of the chain of command.