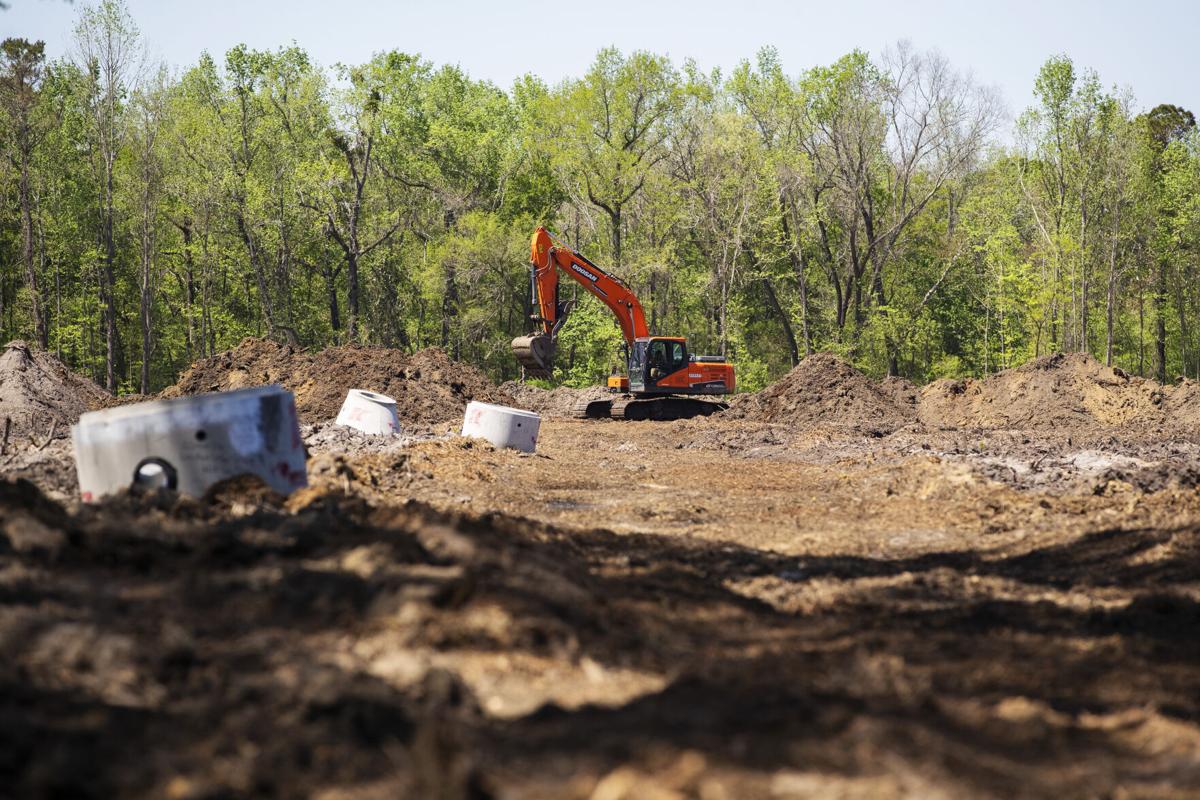 Land is cleared for a new shopping complex off Dorchester Road in North Charleston on Thursday, April 1, 2021. Dorchester Road becomes congested with daily commuters but there is still room for more development, and improvements to the road are being planned.  Lauren Petracca/Staff 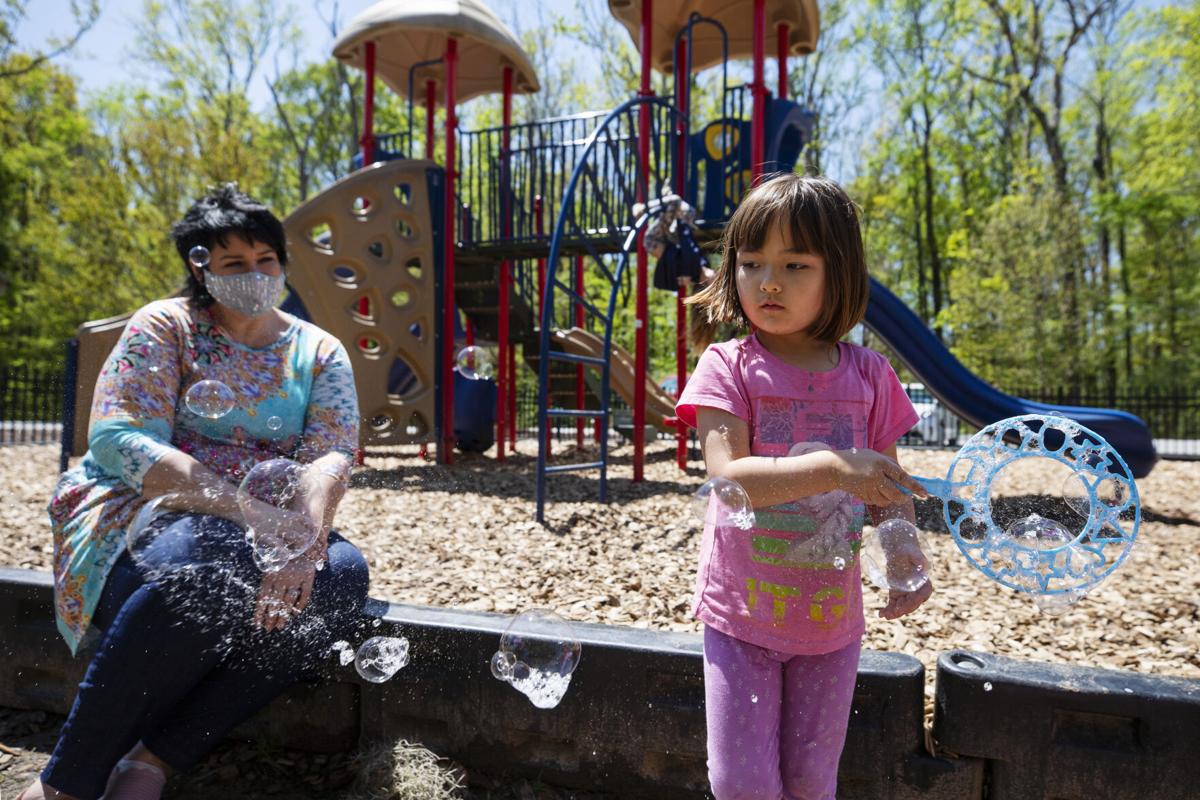 Felicity Chance, 5, makes bubbles near her teacher, Cheron Bryant, while visiting Wescott Park in North Charleston for a field trip on Thursday, April 1, 2021. Chance is a kindergartner at Crown Leadership Academy, a private K-12th grade school that opened in the area last year. Lauren Petracca/Staff 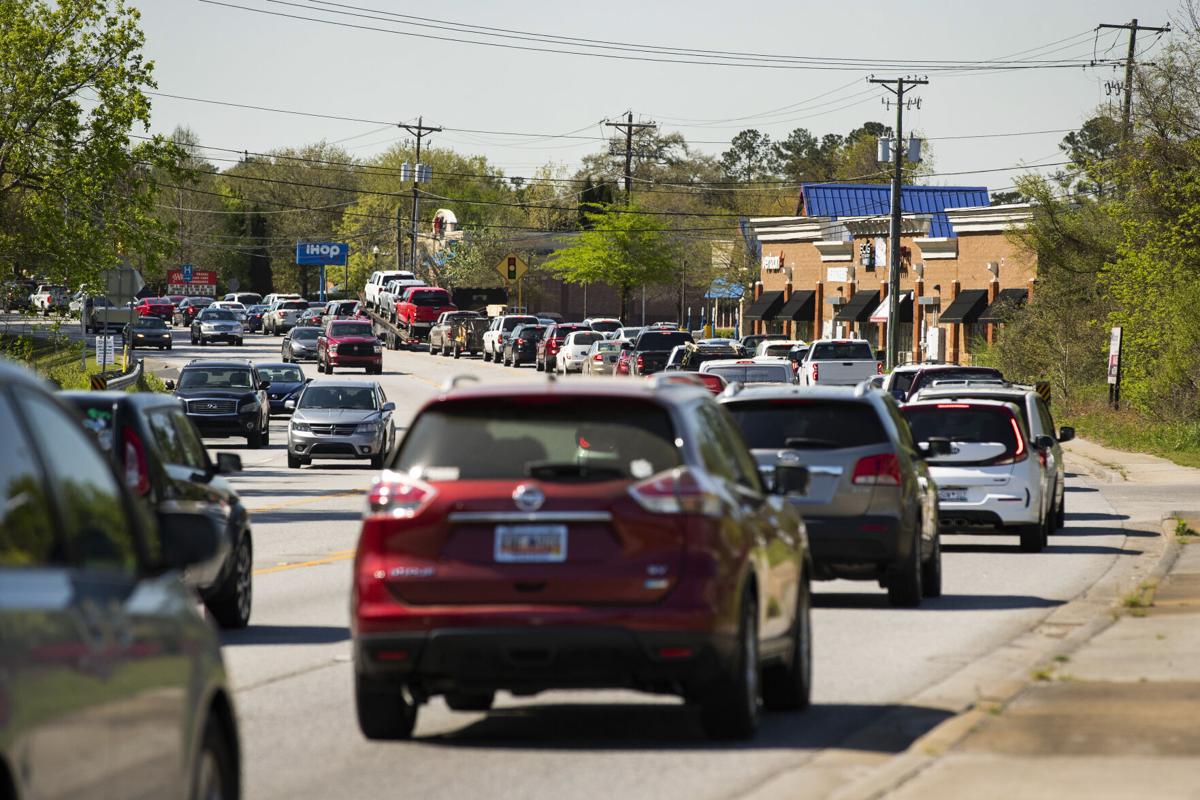 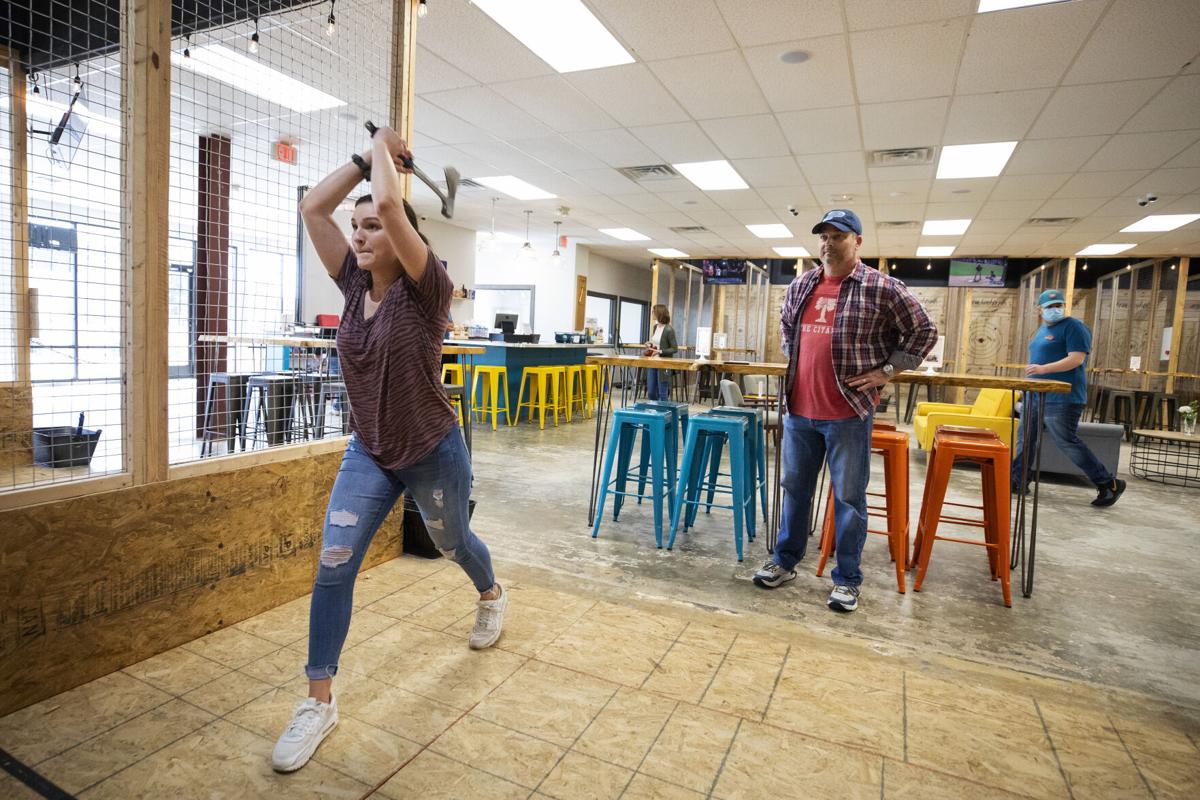 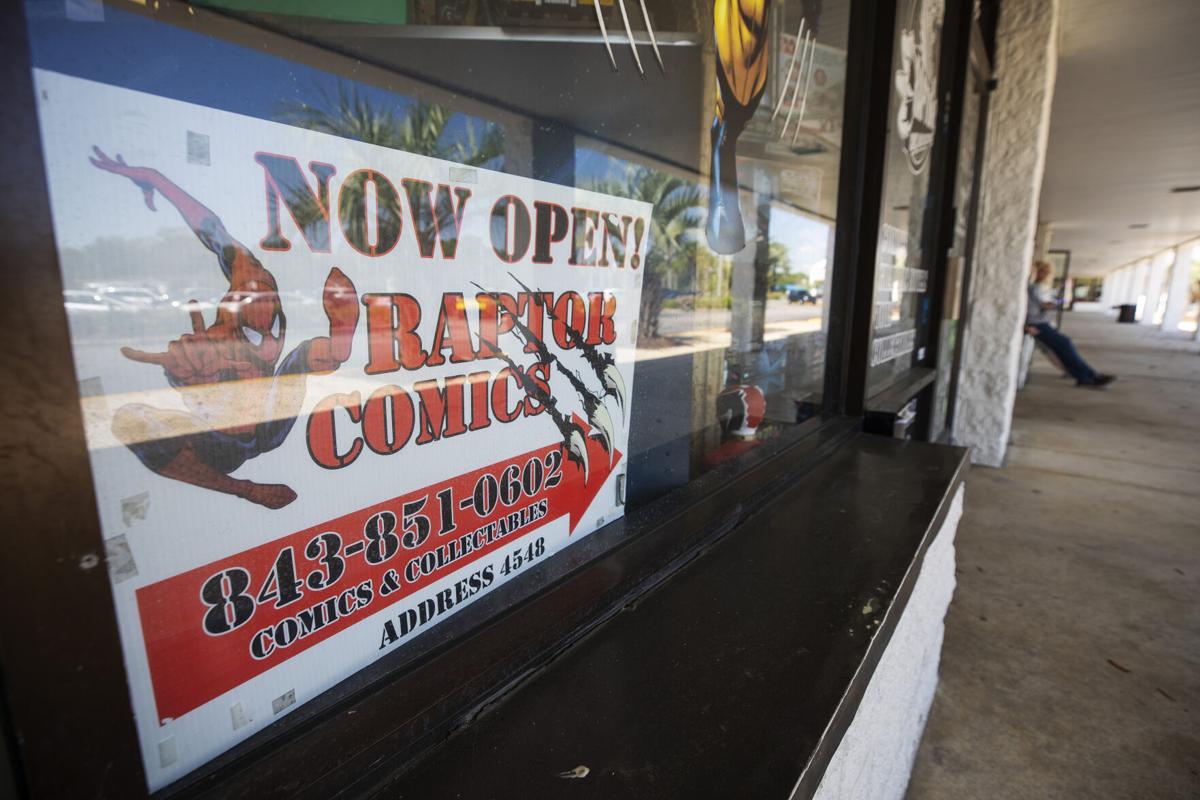 A now-open sign sits in the window of Raptor Comics in the Ladson Oakbrook Shopping Center in Dorchester County on Thursday, April 1, 2021. Lauren Petracca/Staff 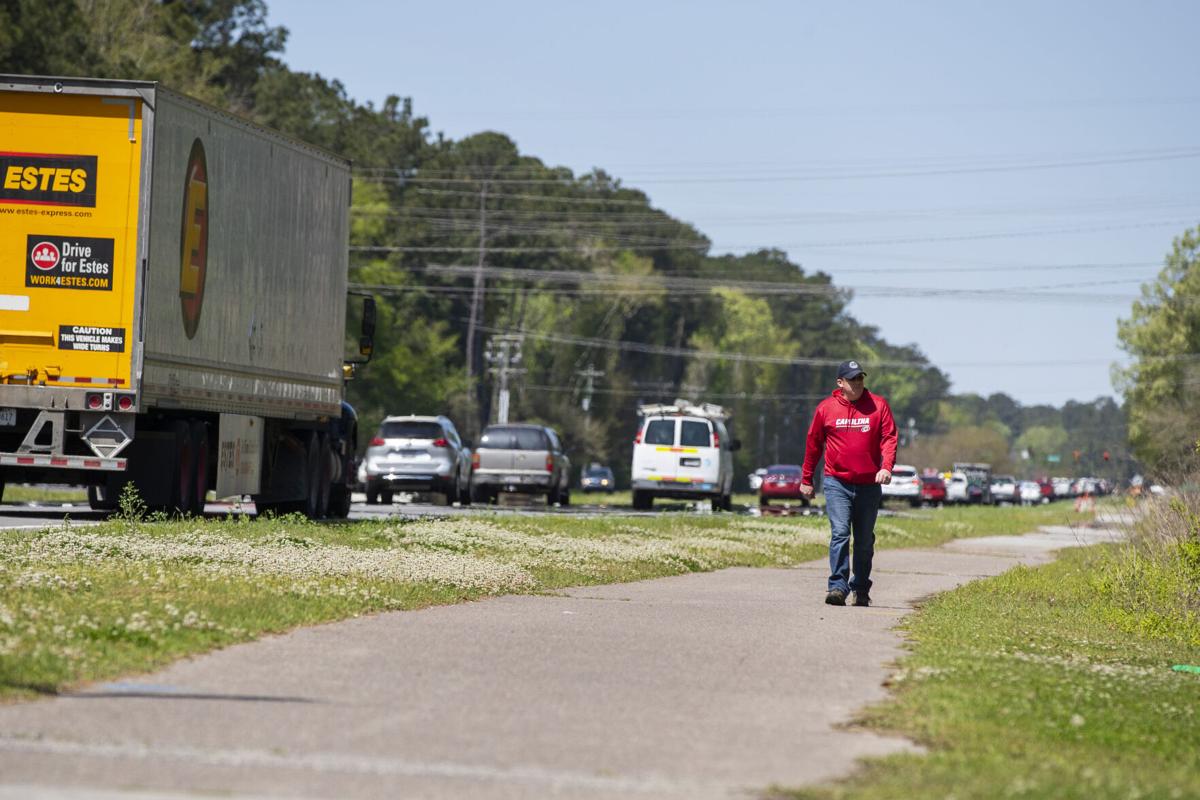 Alex Civils walks on a sidewalk beside Dorchester Road in North Charleston on Thursday, April 1, 2021. Civils was walking home after dropping his vehicle off to get work done at a nearby business. Lauren Petracca/Staff

Land is cleared for a new shopping complex off Dorchester Road in North Charleston on Thursday, April 1, 2021. Dorchester Road becomes congested with daily commuters but there is still room for more development, and improvements to the road are being planned.  Lauren Petracca/Staff

A now-open sign sits in the window of Raptor Comics in the Ladson Oakbrook Shopping Center in Dorchester County on Thursday, April 1, 2021. Lauren Petracca/Staff

Alex Civils walks on a sidewalk beside Dorchester Road in North Charleston on Thursday, April 1, 2021. Civils was walking home after dropping his vehicle off to get work done at a nearby business. Lauren Petracca/Staff

SUMMERVILLE — Between North Charleston and Summerville, traffic along Dorchester Road often comes to frequent standstills as thousands of drivers make their return home after work.

In the next couple of years, there will be even more people and cars here, and even more questions around the future of getting around.

“If they choose not to take the interstate, it’s the only way to come in,” said Stafa Elton, a Summerville resident who frequents the road to get to good fishing locations in town.

Dorchester Road runs for nearly 20 miles and is filled with connections to housing developments, businesses, Joint Base Charleston and the Ashley River. Those who want to avoid Interstate 26 often end up on the parallel road.

Dorchester County has recently flagged the area around Summerville’s portion of the road as a space for reinvestment. The goal is to entice more private businesses and property owners to move to the area.

Though North Charleston said it is pretty much maxed out with planned residential projects around the corridor, the commercial Cedar Grove Shopping Center project is planned along Dorchester Road. The city has also been trying to get a handle on the impacts of cut-through traffic as drivers use shorter streets to avoid Dorchester Road gridlock.

It's all a side effect of a boom in population as more people make the Lowcountry their home. The state Department of Transportation is mapping improvements on Dorchester Road to help with its daily and future traffic issues. Some of the proposed work includes raised medians, left-turn improvements and turning-lane extensions where possible.

Where it gets complicated is having to buy private property for additional lanes. The biggest accident concerns have been around left turns on the road, according to officials.

But driving down Dorchester, there's also still plenty of space and for-sale signs indicating room for even more businesses and housing developments to be considered.

“I’m just so excited,” said Alpa Patel, owner of Glam Salon and Spa just off of Dorchester Road in the Village at Coosaw shopping complex in North Charleston. She recently moved her business to a space in the complex closer to Dorchester Road for more exposure.

“My business has just grown up,” she said.

For some residents, the growth is welcomed. Michael Kahn, a 10-year resident of Summerville, said he hopes it will feed the creation of more local businesses. He lives near Dorchester Road and said he believes growth is going to happen whether people like it or not.

“If some local people want to open something down here, that’s better for us,” he said.

On the Summerville side

Jill and Heath Forbes opened their ax-throwing business — Lumber Jill's — in Summerville's Oakbrook area off  Dorchester Road because they said they saw a need for more family-oriented activities. It sits in a small cluster of various businesses. Next to it is a thrift store and pizza shop. Across the street, there’s the Magnolia Dance Academy and several fast-food chains.

“For us to be in this area it’s been good,” said Emily Lawson, a longtime Lumber Jill's employee. “This area needed something like this."

Dorchester County is looking at the space around the Summerville side of Dorchester Road at Oakbrook as an opportunity for reinvestment. An Oakbrook tax increment financing district was created as a way to fund the redevelopment.

With a TIF district, when property values rise, that change in value is used to pay off all of the bonds used for redevelopment projects. The overall goal is to encourage more businesses to invest in the area following $35 million in development projects.

For example, Dorchester County is using the funds to build a major athletic complex. Ideally it would encourage people like the Forbeses to open more businesses around it because there will be more people moving around in the area to get to the complex.

The town is also planning a more than $6 million park around what is now the Herbert H. Jessen Boat Landing. Around $2 million will come from the TIF. The park will be more than 40 acres and is less than a mile from Lumber Jills.

Some of the new amenities will include an improved boardwalk, restrooms, nature trails and a multipurpose building. The only way to get to the park involves driving down or crossing Dorchester Road.

"There are tons of people who drive down Dorchester Road," she said.

Christopher Davis, owner of Raptor Comics and Collectibles in Oakbrook, said the area was nothing but woods when he was younger. Davis said he appreciates the attention given to the Oakbrook community because it has room for more.

His comic shop is surrounded by open and empty retail space.

"It has the potential, it has the capacity," he said.

Summerville is attempting to pin down a traffic engineer to manage some of the Dorchester Road growth. What makes the street so complicated is that a lot of businesses and food chains sit right next to it.

According to town officials, any widening attempts would mean buying land from businesses such as fast-food chains. Because of this, regulating the traffic is the next option. That involves getting an engineer who can organize advanced traffic signaling to help with vehicle flow.

In order for DOT to install the advanced signaling, an engineer has to be there to maintain it. According to Vance, those advanced signaling improvements on Dorchester Road would be a joint effort between Summerville, the county and North Charleston.

North Charleston has felt the impacts of increased traffic along the Dorchester Road corridor.

An indication of cut-through commuters was shown in a city analysis that revealed 60 percent of traffic in front of Joseph Pye Elementary school, located off Patriot Boulevard, came from Dorchester Road, said City Councilman Ron Brinson. The rush-hour gridlock outside the school was a safety issue because it potentially hindered emergency response vehicles, he said.

Congestion hasn’t been as much of an issue during the pandemic, but the city expects those traffic levels to return at some point as people use alternative routes to avoid the congested Dorchester Road thoroughfare.

“It’s not surprising when you think about it,” Brinson said.

More cars have also increased wear and tear on infrastructure. Wescott and Patriot boulevards, shorter streets near Dorchester Road, were recently repaved by the city earlier than previously expected because of the roads’ high use.

Now, North Charleston is grappling with whether to widen the roads. But instead of improving traffic flow, adding more lanes could have an adverse effect by inviting more cars, Brinson said.

“That’s something we’ve asked the community to give us their thinking,” Brinson said.

More development is underway that could increase traffic along the Dorchester Road corridor.

Just south of Wescott Boulevard near Riverbluff Parkway, land is being cleared for the Cedar Grove Shopping Center that will include several nationally known retailers, including Lidl, PetSmart, Ross Dress for Less, HomeGoods, Five Below and Ulta Beauty.

Ken McCunsey, president of the White Hall Property Owners Association, said the new complex is an encouraging addition to the community.

Though there are some in the neighborhood who’d prefer that the 65-acre tract along Dorchester Road remain undeveloped, McCunsey said he thinks most people in the 750-home subdivision welcome new opportunities for shopping.

“I think the overall feeling is pretty positive,” he said.

The main concern among the community is traffic.

The road gets congested several times during the day and McCunsey would like to see it widened. Charleston County has plans to add lanes to the corridor, but Dorchester County does not.