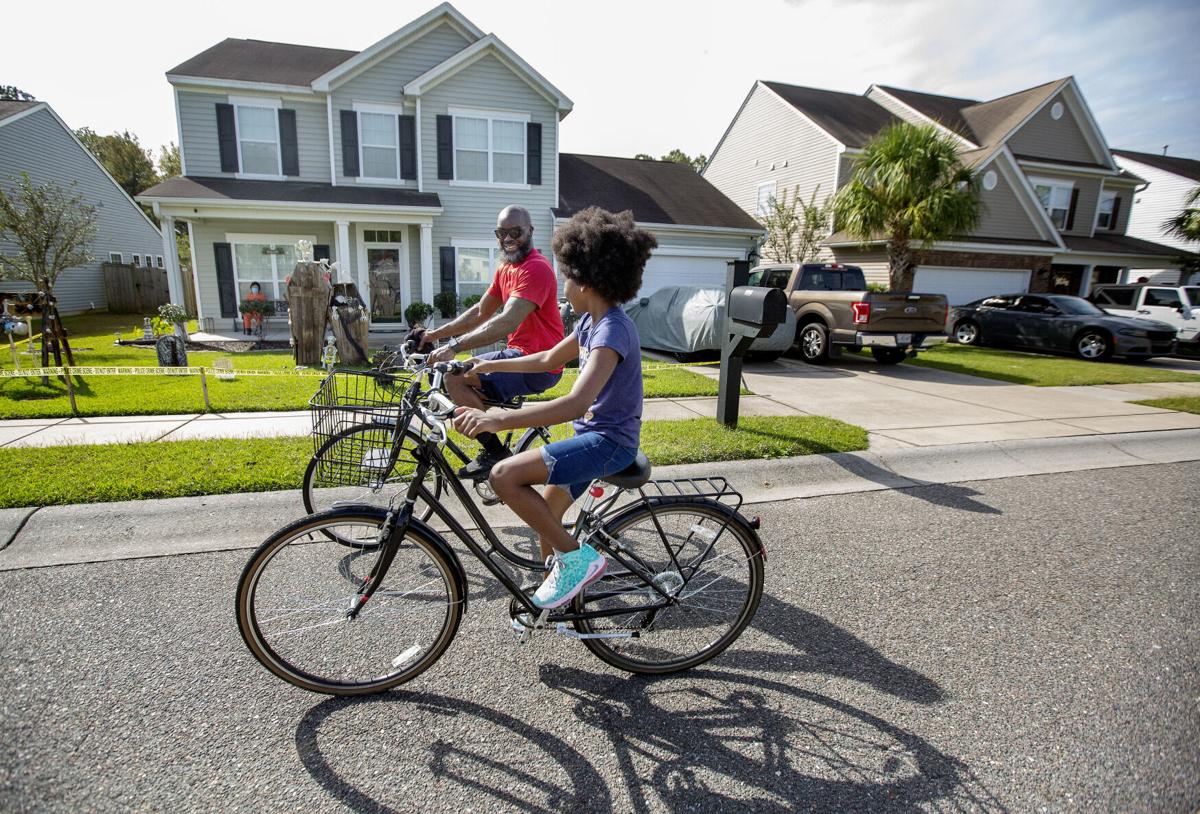 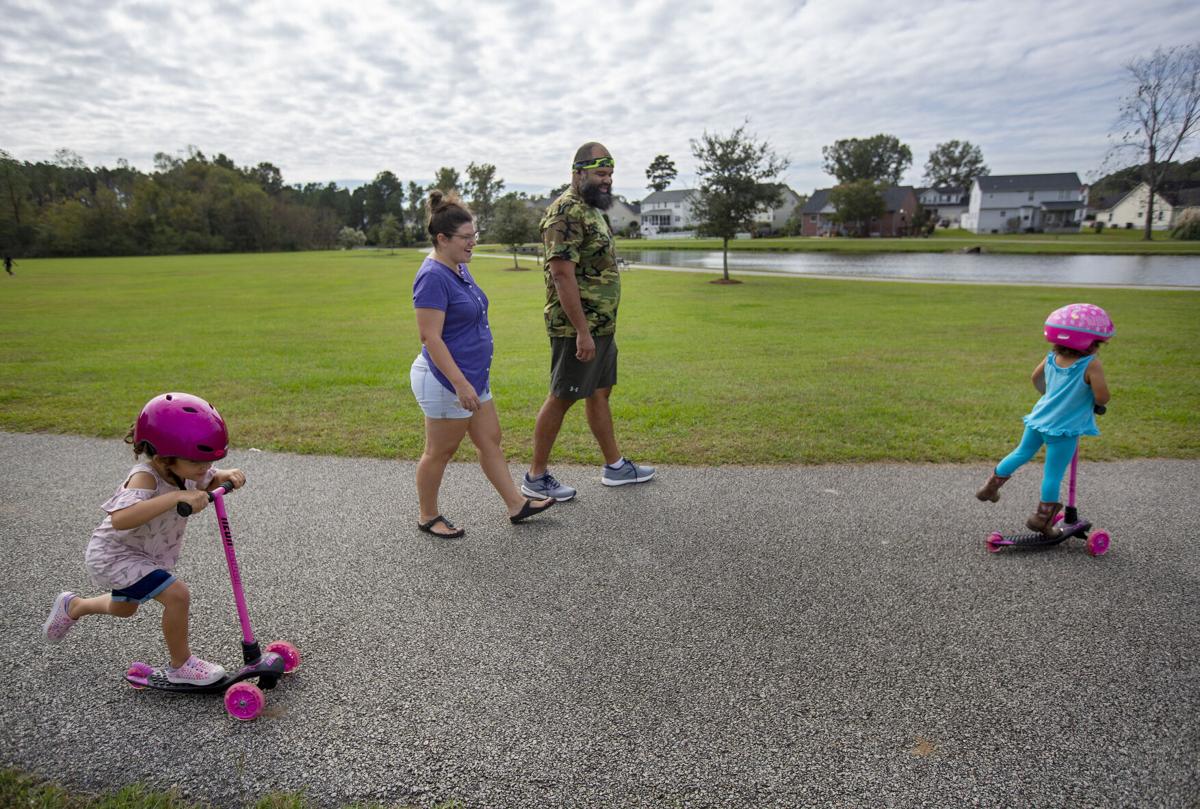 Andy Lopez and his wife, Leslie Lopez, who moved to Goose Creek in 2018 with their two girls Aleena Lopez, 4, (left) and Layla Lopez, 2, take a lap around the pond at the Marguerite H. Brown Municipal Center on Wednesday, Oct. 28, 2020. Grace Beahm Alford/Staff 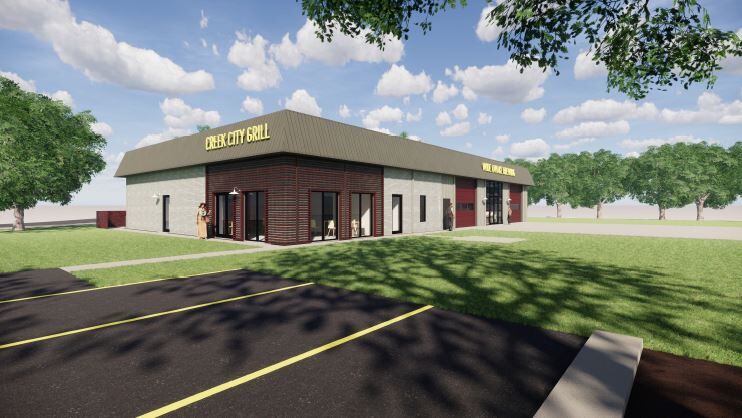 The Creek City Grill & Brewery will open in the second quarter of 2021. Provided. 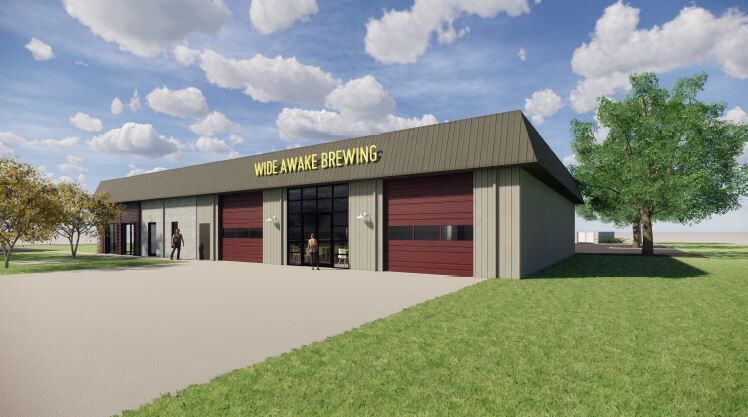 The former Goose Creek Fire Station is being renovated into the city's first locally-owned brewery. The Creek City Grill & Brewery will open in the second quarter of 2021. Provided. 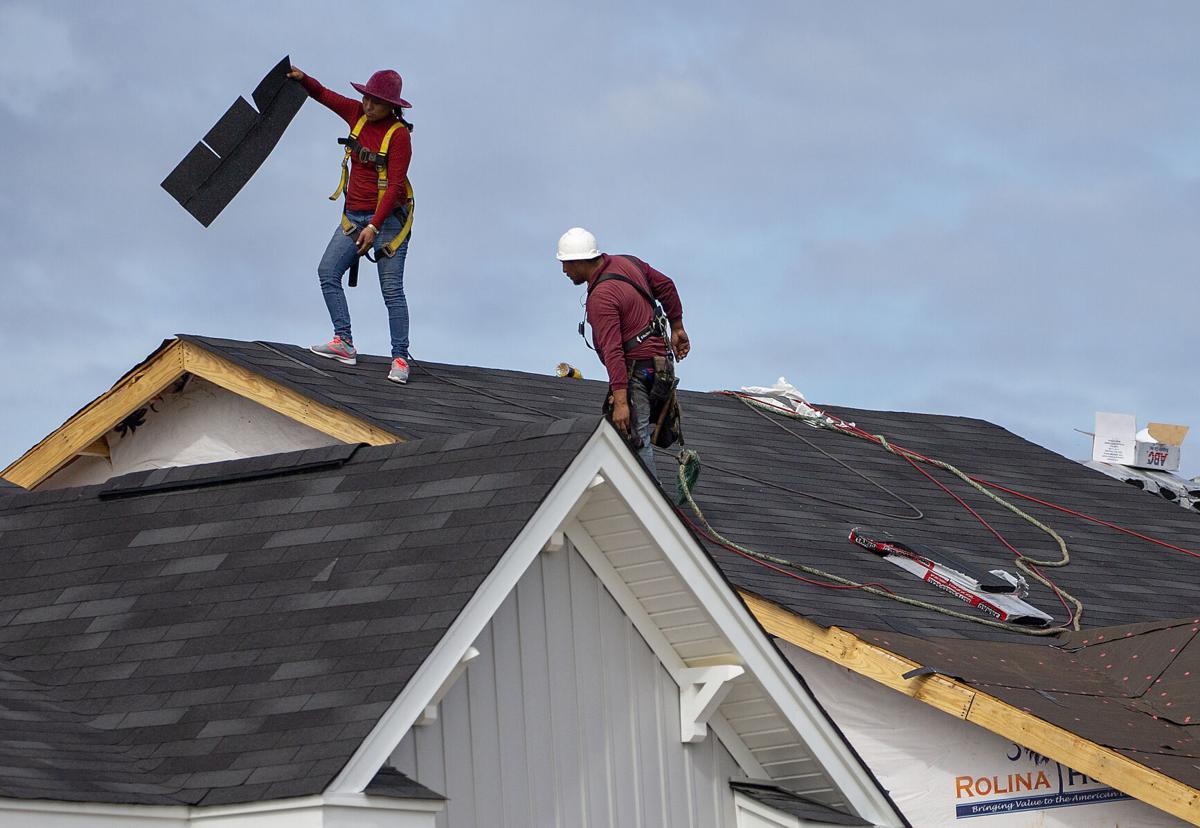 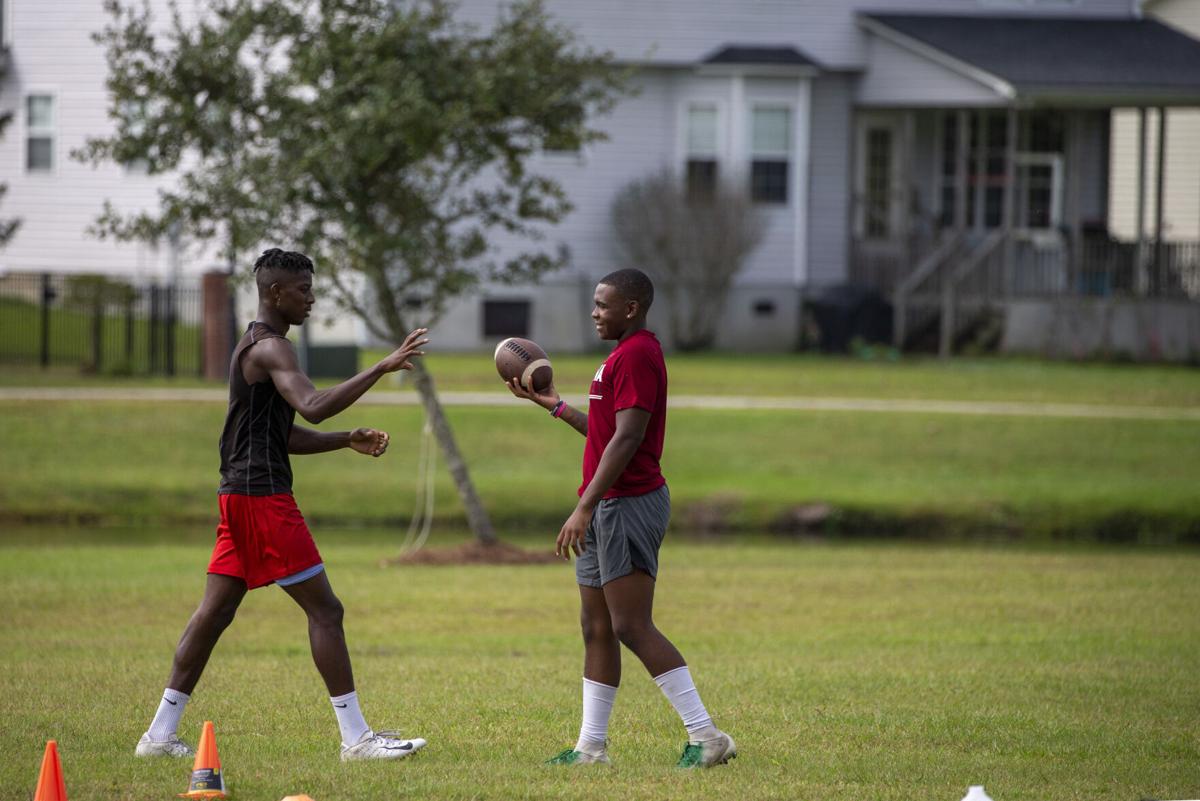 GOOSE CREEK — For decades, this Berkeley County city has been synonymous with the military and rural, country values.

It was a place where former Navy and Air Force personnel who had been stationed at one of the area's military bases would come to retire.

But as major manufacturing companies such as Boeing and Volvo opened plants in the Lowcountry, the city’s population has exploded, especially over the past decade.

Since 2010, Goose Creek has been one of the fastest-growing cities in South Carolina, adding more than 10,000 new residents — growing more than 27 percent — over a 10-year span. With Carnes Crossroad already within the city limits and other megadevelopments like Cane Bay and Nexton  just a stone’s throw from the city lines, Goose Creek is only going to get bigger. The population is expected to break the 50,000 barrier by 2024.

While the military, which makes up about 20 percent of the overall population, and longtime established residents still have a strong influence within the city, those preconceived notions about the eighth-largest municipality in the state are long gone.

Goose Creek has become younger, more affluent, better educated and more diverse over the past 20 years.

It’s a fact that Mayor Greg Habib has known for some time. Habib, the son of a Navy master chief, has seen the city transform from a sprawling military encampment to one of the up-and-coming cities in the Lowcountry.

It’s a rebranding effort that Habib has pushed since he took office in 2018. Those dividends are beginning to pay off nationally. Money Magazine last month named Goose Creek the best place to live in South Carolina.

“It’s not braggin’ if it’s true,” said Habib, who moved to the city with his family in 1982. “I think for years there was this perception of what Goose Creek was and it took us a while to break away from that.”

There has always been an unspoken rivalry between Goose Creek and its northern neighbor, Summerville. Goose Creek has begun to encroach on Summerville's reputation as the area’s most desirable and affordable alternative to Charleston.

Goose Creek is quickly becoming a top destination among younger residents. It has a median age of 32 to Summerville's 35½ years. Its median income is higher, at $65,884 to $59,306, and it’s more diverse with a 31 percent non-White population compared to Summerville’s 28 percent, according to the latest census statistics.

Hanahan, Goose Creek among hardest-working cities in SC, according to website Zippia

Some people might be surprised by those numbers, but Habib isn’t one of them. It's affirmation for what he already understood about the city.

“I knew what the city was and who my neighbors were,” said Habib, who played football at Goose Creek High School.

Those factors were among many reasons that attracted Dwayne Bey and his family to the city in 2012.

"You can see the growth,” said Bey, who went to Burke High School and lives in Brickhope Plantation. “I like Goose Creek because you can see how they put the money back into the community. They have great programs for kids."

These days, a city hasn’t officially arrived on the scene until it gets its own brewery.

Goose Creek will have its first — The Creek City Grill & Brewery — in the second quarter of 2021.

“There are just not a lot of options when it comes to food and beverage,” said Eric Roberts, owner-operator of The Creek City Grill & Brewery. “If you live in Goose Creek, you’ll go to North Charleston or Summerville to find a good place to eat or a brewery.”

It was something that Jeff Baxter noticed as well. When Baxter, a partner in Cityvolve, a North Charleston real estate development group, would go out in North Charleston, he would constantly run into Goose Creek residents.

“It might be anecdotal, but it seemed like there was something there,” said Baxter, whose firm specializes in revitalizing existing buildings that have outlived their original purpose. “There was an unmet need in Goose Creek.”

In Goose Creek, that building was the 1970s-era fire station on Button Hall Road that had fallen into disrepair. The city sold the building and the property for $275,000 to Cityvolve, but the city rebated $75,000 of that amount to help with renovation costs. Roberts, who was stationed at the Naval Weapons Stations in the early 1990s, will lease the property from Cityvolve.

“For the longest time, the city had a very conservative approach to business,” Roberts said. Habib and City Council have changed that, he said. "They have made economic development a priority. It’s a great venue in an ideal location.”

And it’s a status symbol for Goose Creek to have a brewery within its city limits.

“Why is having a brewery significant? Because it’s cool,” Habib said.

The hope is that the new brewery will be a catalyst for other commercial development in the area. There’s already a commercial real estate project in the works right down the road from the old fire station.

“It was clear that we were having some food and beverage leakage and a lot of money was leaving town,” said Matt Brady, the city’s economic development director. “There are too many people leaving the city to do food and beverage and retail. We would like to capture some of that.”

Renovating the old fire station and turning the Button Hall Road area into another Park Circle isn’t out of the question. A flourishing business center in the middle of the city could mean millions of dollars more in revenue for the city's coffers.

“Are we trying to copy the success they had in North Charleston with Park Circle? Guilty as charged,” Habib said.

Having a diverse population means more than ethnicity and socioeconomic background. It means having a diverse workforce able to fill a wide range of jobs and a diverse ownership group within the business community.

Goose Creek is 19.9 percent black, 8.3 percent Hispanic and 3.4 percent Asian. There are more than 2,300 businesses in the city and more than half are owned by minorities or women — 641 minority-owned and 953 run by women, according to the latest U.S. census statistics.

It’s one of the reasons that Valinda Miller opened up Turning Page bookstore off of St. James Avenue. Miller had been to the Lowcountry in the mid-1990s when the Naval Shipyard was being closed. She found a city in transition, searching for an identity.

“When the base was closing, there were all these businesses that were boarded up,” said Miller, who moved permanently to Goose Creek from Washington, D.C., in 2003. “When I came back, the city was coming alive again.”

Miller has seen her clientele transition, especially over the past five years, as younger, more diverse residents have moved into the area.

Google and Amazon have moved in down the road from Goose Creek, attracting young workers to the area. A strong job market, affordable housing and safe neighborhoods were what attracted Jonita and Pernell Irving. The young couple with two boys, ages 1 and 4, moved to the city in September 2019.

“Goose Creek is kind of in the center of everything,” Jonita Irving said. “It’s near Summerville, North Charleston and downtown. It’s convenient, and with two boys, that was important.”

Balancing history and building in a forest: How development is reshaping Cainhoy peninsula

The reasonable housing market was also a key for the Irving family. There has been a spike in housing prices during the coronavirus pandemic — rising almost 10 percent since March. But Goose Creek is still considered a good deal, with the median house price at about $225,000 in September. The couple had looked at homes in Awendaw, just north of Mount Pleasant, but got more house for their dollar in Goose Creek.

“You can work a 9-to-5 job and afford a good home in Goose Creek,” said Pernell Irving, who played football at Berkeley High School. “It’s one of the few places in the area where you can do that.”

As a second-generation American, the grandson of Lebanese immigrants, Habib understands the importance of diversity in his community.

“Diversity helps people grow,” Habib said. “If you grow up in an echo chamber, you don’t grow as a person. Diversity is important when you are raising your family so you can have well-rounded citizens.”

The growth and diversity of the city hasn’t always been a welcome change for longtime residents.

“There are people that have lived in Goose Creek for 50 years and hate to see it grow,” Habib said. “A lot of folks lament that and I get it. But growth is going to happen.”

Goose Creek is going to continue on its present trajectory as a young, diverse, affluent community if Habib has anything to say about it.

Watch for another story in the Boom & Balance series, A statewide look at growth hot-spots, and how those places have responded and tried to adapt. To read more stories in the series, go to postandcourier.com/boomandbalance.